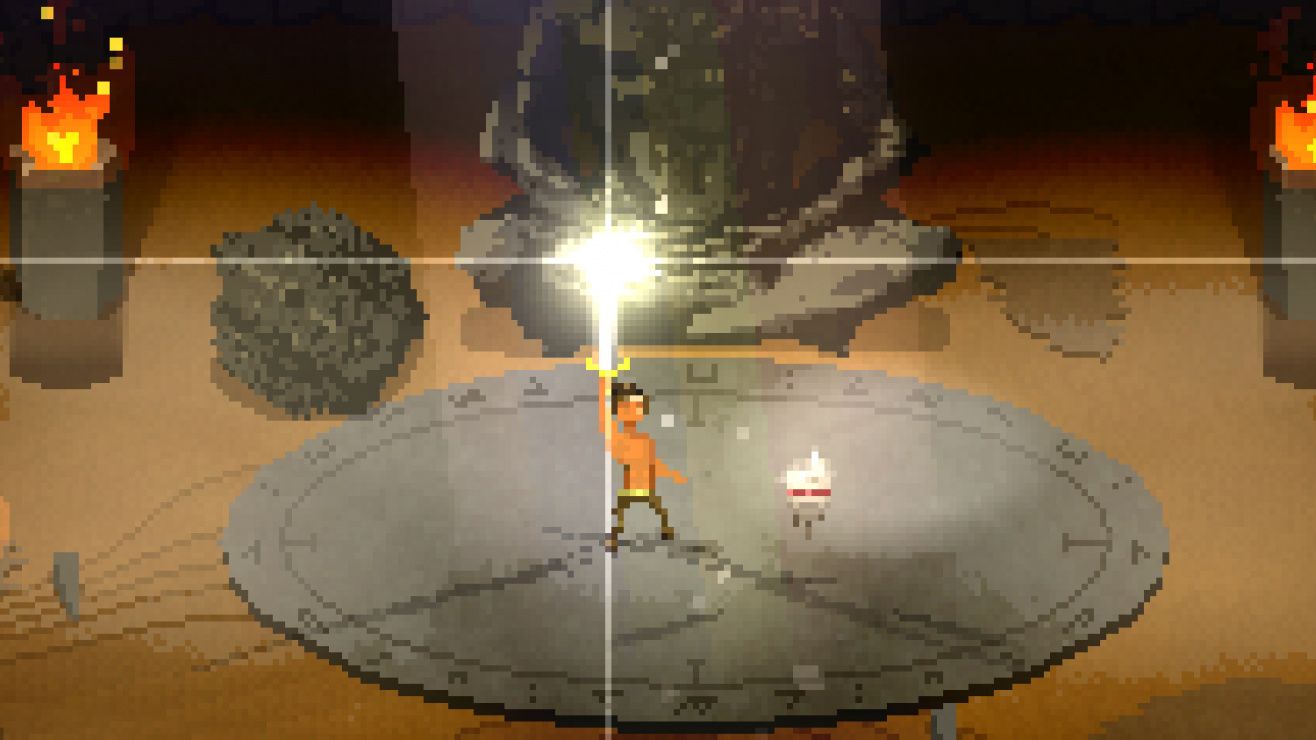 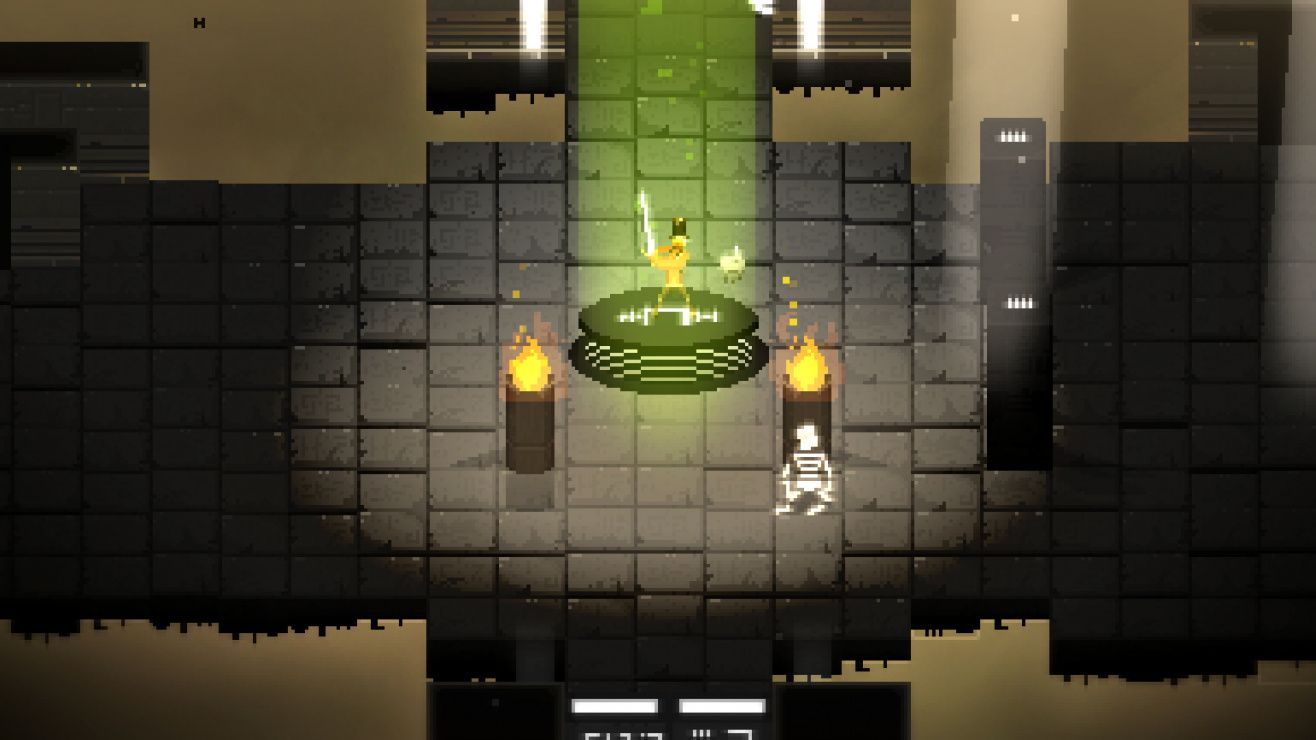 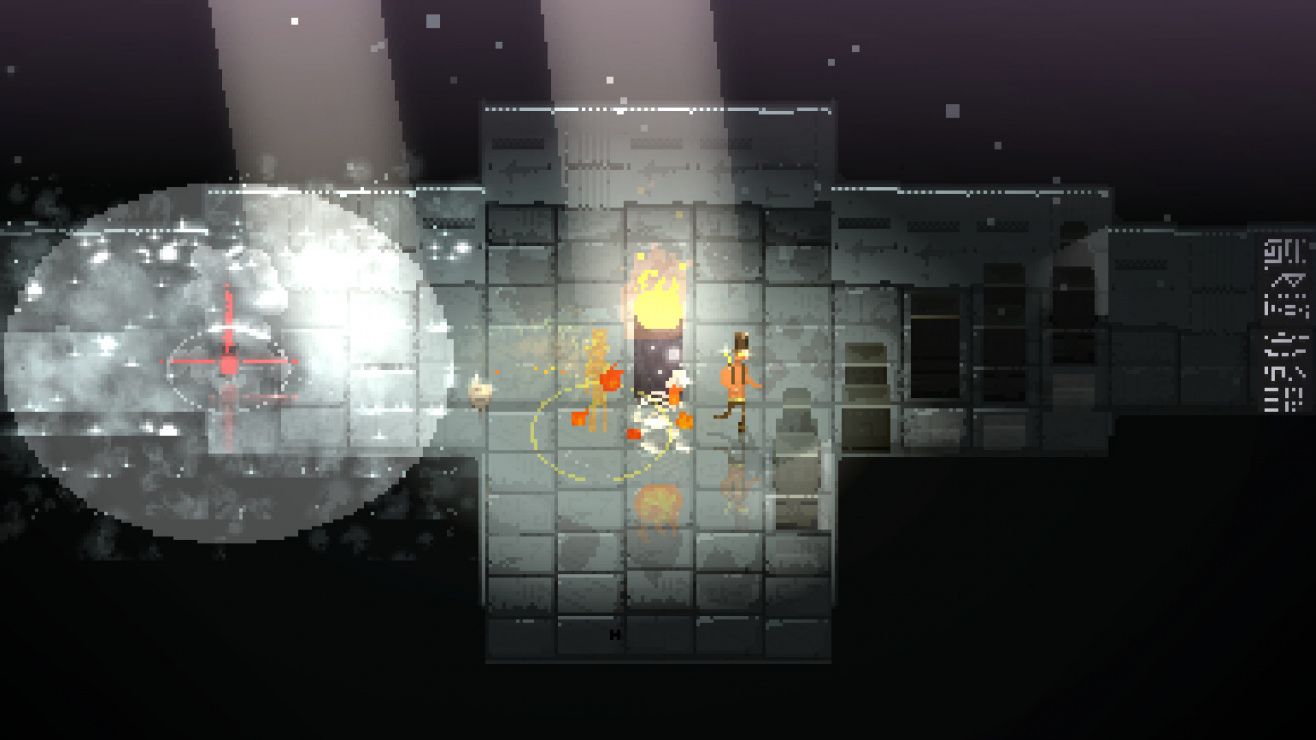 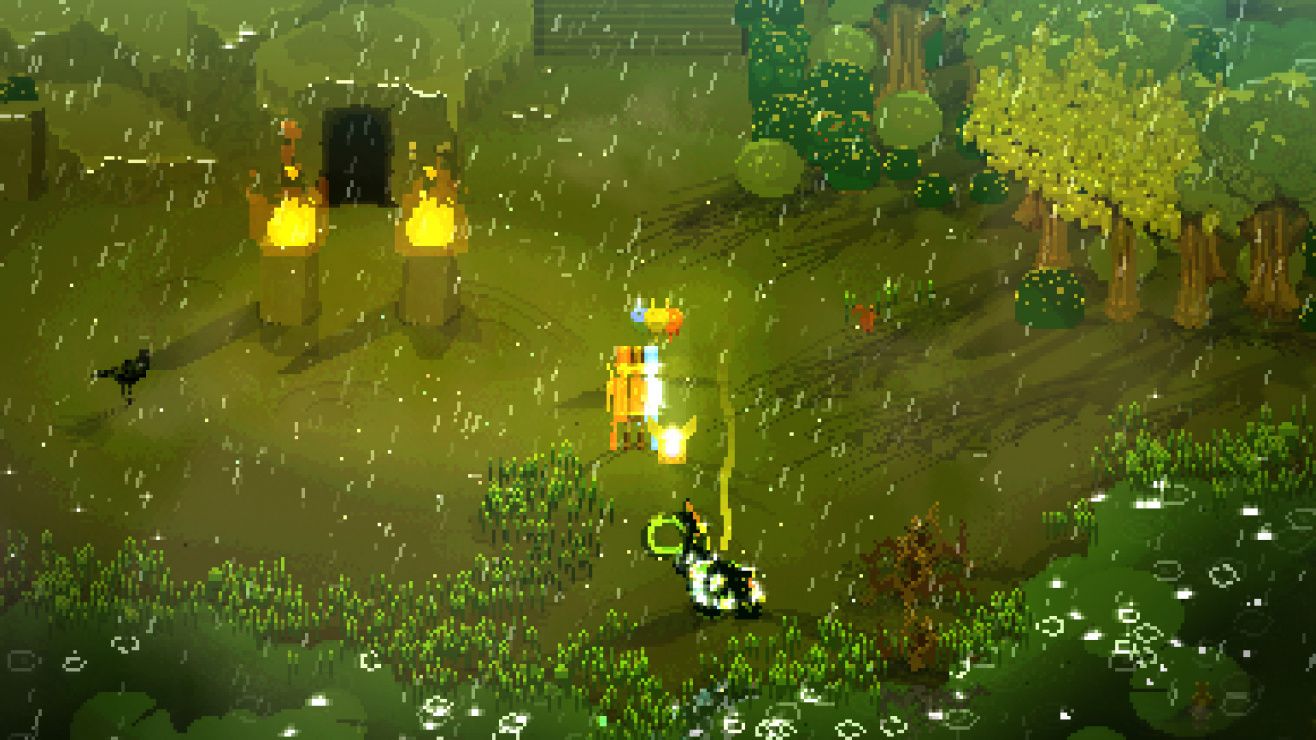 PC Steam Console Playstation action Xbox indie adventure singleplayer rpg role-playing pixel
Songbringer is a procedurally-generated scifi action RPG with swords, secrets, dungeons, bosses and stuff. You play the role of protagonist and accidental hero, Roq Epimetheos. With a propensity for partying and making music, he cruises the galaxy with his skybot Jib aboard the ship Songbringer, searching for verdant planets absent the presence of galactic police. When Roq finds the nanosword hidden in a cave on Ekzera, he unwittingly awakens an ancient evil. The sword is pretty fraggin' sweet though. It... hums.
Share Share Share
Promote for 50G

I don't understand why this game doesn't have a big cult following like Hyper Light Drifter. It's a mix of Legend of Zelda: Link to the Past gameplay, Star-Wars-esque lore, and a jambalaya of procedural generation, optional permadeath, optional 2-player mode, intuitive button-binding system, nice chiptune soundtrack and pixel art graphics, casual and fun combat and exploration, cool power-ups, equitably challenging dungeons... Hyper Light Drifter and LoZ: LttP are my two favorite games of all time. I love the unlabeled sub-genre they fit into, and it's way under-produced. There are other games out there like Anodyne (which is another fun game, don't get me wrong) that come close but don't quite fit the bill. Songbringer easily blends in with the category for me and I hope to see more of its kind down the road. 10/10
-----------
Addendum:
Even as I was combing the 2017 Steam Awards I had in the back of my mind that if there was a category for loving a game no matter what other people thought, Songbringer would be what I selected for that. Sure enough, Songbringer became the recipient of my The No Apologies Award nomination as soon as I spotted it.

I liked this game, although some game elements are a mixed bag. It reminded me of the NES Zelda game, after a few hours of getting a feel for the game. Lot of action-rpg elements, with pixel art graphics. Combat gameplay is fairly simple, with lots of Conan-style sword swinging. Emphasis is instead on exploration and experimentation. Got to experiment and try things out to progress. The game had a mix of weird-electronica sounds that fit with the theme.
While comparable to the Zelda game, this is not going to be a classic. The original Zelda inspires lasting gaming memories, and Songbringer is going to be easily forgotten. Zelda used pixel graphics to the best of that system's abilities, while Songbringer uses pixel graphics to obscure detail - to poor effect sometimes. And while Zelda used secret locations as surprising additions to the vast existing game world, Songbringer forces players to figure out the secret elements early, which often gives a feeling of dead-ends.
So in the end, I played this game on an old computer running ubuntu linux 18.10, with radeon mesa drivers, and an xbox type gamepad controller. A gamepad is strongly recommended. One technical issue was that the mouse cursor remained on the screen, in fullscreen mode. The game was developed with FMOD Studio, and it had an installation size of 1300 MB.

I do not normally review games, I have always thought there were better people out there with a much better vocabulary than me, who could write up a legit proper review. BUT THIS GAME CHANGED THAT! This Game is one of the best games that I have bought off steam, in a long time. To be honest, it is up there as GOTY worthy, for me anyway. First I will say that that has a lot to do with the soundtrack/audio. If you play this game, do yourself a favor and use headphones. the music and audio ambience is top freaking notch. The Art is beautiful. The game play, while at times can be difficult, is fun and solid. But the best thing that this game does, for me, is capture how i felt when i was a little kid playing games like Zelda or Metroid. It captures that sense of disovery....that feeling you get when you are at the end of your rope and keep running into dead ends...but then...you see something that you overlooked...another passage that leads you to an item that you need which will unlock another part of the map to explore! and progress continues! It's a great sense of acomplishment. Between that, the art, the sound, and the fun characters....this game made me want to leave a review. Few games make me want to review them, but Songbringer was worth it. so yeah play this game. Hopefully I wrote this out as well as I had it planned out in my head.

TL;DR - Songbring exceeded all my expectations. Normally Zelda-esque games disappoint me and make me sad. Songbringer won my undivided attention even though I was working on a paper for my Master's. Revelling has never been more fun, and with multiple ways to solve various problems, procedural world generation, and alternate endings, Songbringer is a no brainer. Buy it. 8.2/10
---
Graphics: Songbringer is retro... but retro in the style of retro on crack. The visuals at first seem kind of interesting but nothing special. Then as you progress in the game, you start to see all the added effects. Particle effects are done extremely well. Night to day effects, death effects, use of special items... all effect the game in a great way and help set the mood.
Music: Songbringer's music is fairly simple, but fits in with the overall feeling of the game. I usually felt like whatever sound effects I was listening to or soundtrack in the background, fit right in with whatever I was doing in game. However, others listening to the music with no context didn't enjoy it as much.
Controls: At first I thought the controls (Xbone) were a little sluggish, but then I realized it's actually sort of a game play upgrade issue (how fast you could swing the sword.) One other issue seemed to be I wasn't sure which action was prioritized when I was hitting multiple buttons at the same time.
Gameplay: It'll remind you of the original Zelda mixed with Link to the Past in the beginning. One of the major differences is procedural generation. I love going back and playing OG Zelda, but everything is always in the same place... with Songbringer, you can actually explore a different world each time. The game will quickly depart from feeling like Zelda as it is a fully developed game in its own right. The backstory was interesting though I would have liked to know more about the other characters. The ability to combine items is interesting though limited and I wish that could have been more developed, BUT works very well as it is. I would have liked a little more detail on the map, even after the ferrets ate their way through everything.
Overall: I really enjoyed Songbringer a lot more than I expected. When I typically play Zelda-esque games, they tend to disappoint, as they try to follow the same Zelda-like formula, but typically with less quality results. What I almost never feel when playing these games, is one that starts from the Zelda style, but leaves me feeling like it matured and grew up and branched out on its own. Songbringer reminds me of everything good about retro-gaming, without being too difficult (though permadeath exists) or too demanding. If you've got the cash, throw down for full price, the dev deserves it. If a sale comes up at 30-50% off... worth it of course. Personally I'm wondering what Wizard_FU comes up with next.

NB:
-One playthrough only.
-Seed string: “Patty.”
-Took the sword.
-11 hours to complete, with 97% map completion, 78% item completion.
-Purchased on sale for $10 during 2018 summer sale.
-The soundtrack's streaming online.
The “procedural Zelda” consensus is accurate, and probably the reason you will buy this game, or not.
The art and soundtrack are much more than pot-sweeteners; Songbringer’s pulpy, ultra-futuristic sci-fantasy brings the genre’s best grit and gloss seductively to life. The opportunity to spend time in (beneath, above) Ekzera brought me back to the game often enough to complete it.
Artistry manifests here in atmosphere, not in gameplay: overworld, dungeons full of enemies, bosses, puzzles, secrets. You’ve done this before.
With my string, Songbringer reliably rewarded one-dimensional aggression. You’re strong, you’re tanky, you’re mashing your basic attack. Only the Trial of Ren (DLC) and a couple of bosses demanded do-o’s.
Replayability hovers in the wings while the credits roll. Different overworlds, different item builds, wearing a shirt, or not. A lot of possibilities.
More challenges would certainly sharpen the hook, but Songbringer is still easy to recommend to any curious rupee collector — at the sale price, anyway.

Back in 1988, when I first explored Zelda's Second Quest I found a hostile re-jumble of the game I thought I had mastered. This new arrangement placed a greater emphasis on things like illusionary walls and hidden dungeon entrances, making finding these secrets all the more rewarding.
Songbringer is not only a wonderful love letter to Zelda 1, but it manages to invoke the Second Quest in a novel way. While this game is packed with homages ranging from it's boomarang-like hat to subtle details like the way the monsters appear on each screen, it's probably the game's most original feature which strikes me as the most Zelda-esque. As each map is procedurally generated based on the name entry screen, each playthrough is predicated on randomly assembled tiles. Thus you cannot fall back on your long-honed instincts of spotting suspicious bushes or dungeon dead ends, Rather than presenting a single intentionally designed map, Songbringer contains countless Second Quests seemingly constructed from pieces of a non-existant First Quest. Thus each playthrough will feel as wonderfully disorientating and satifsifying to conquer as the Second Quest was back on the NES.
Beyond the nostalgia angle, Songbringer also does some interesting (if minor) and decidedly un-Zelda things involving choices and consquences, which lend themselves to multiple playthroughs.
And to sweeten the deal, whatever miraculous way this thing was coded allows it to run with all the graphical options maxed on my 10 year old Ubuntu laptop.