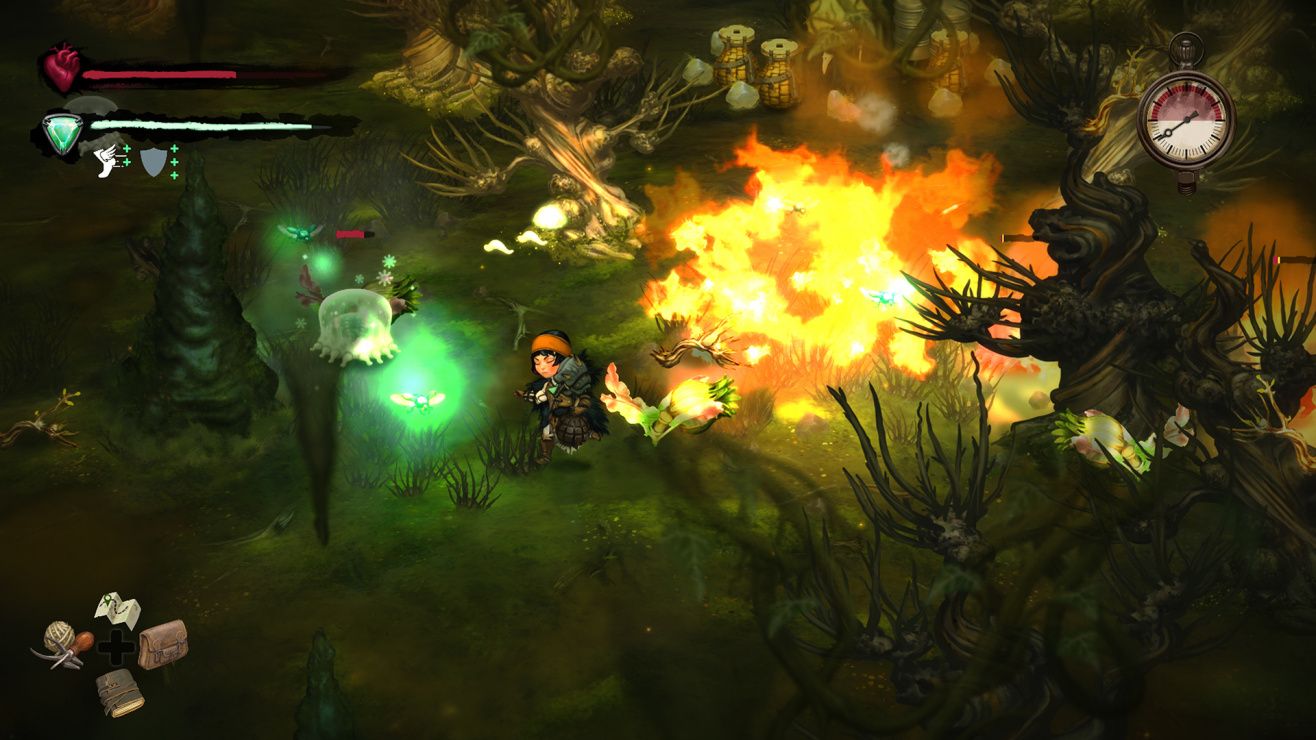 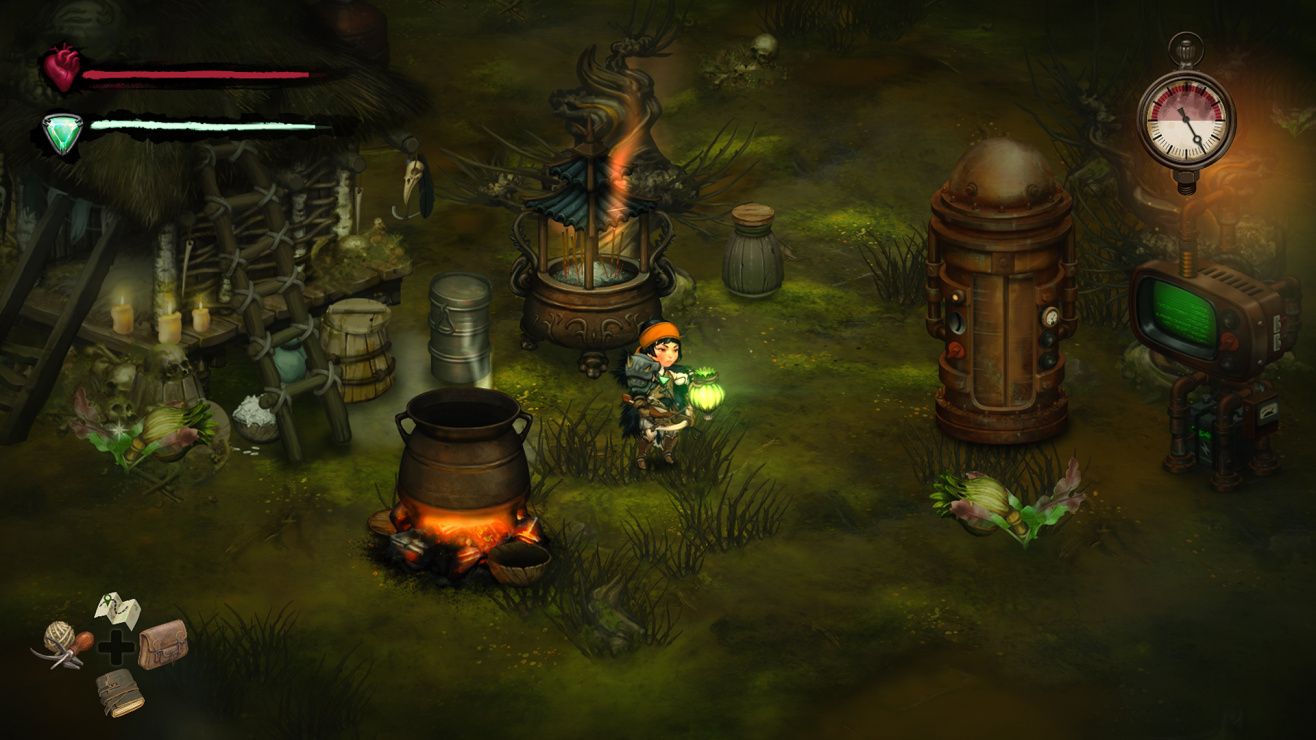 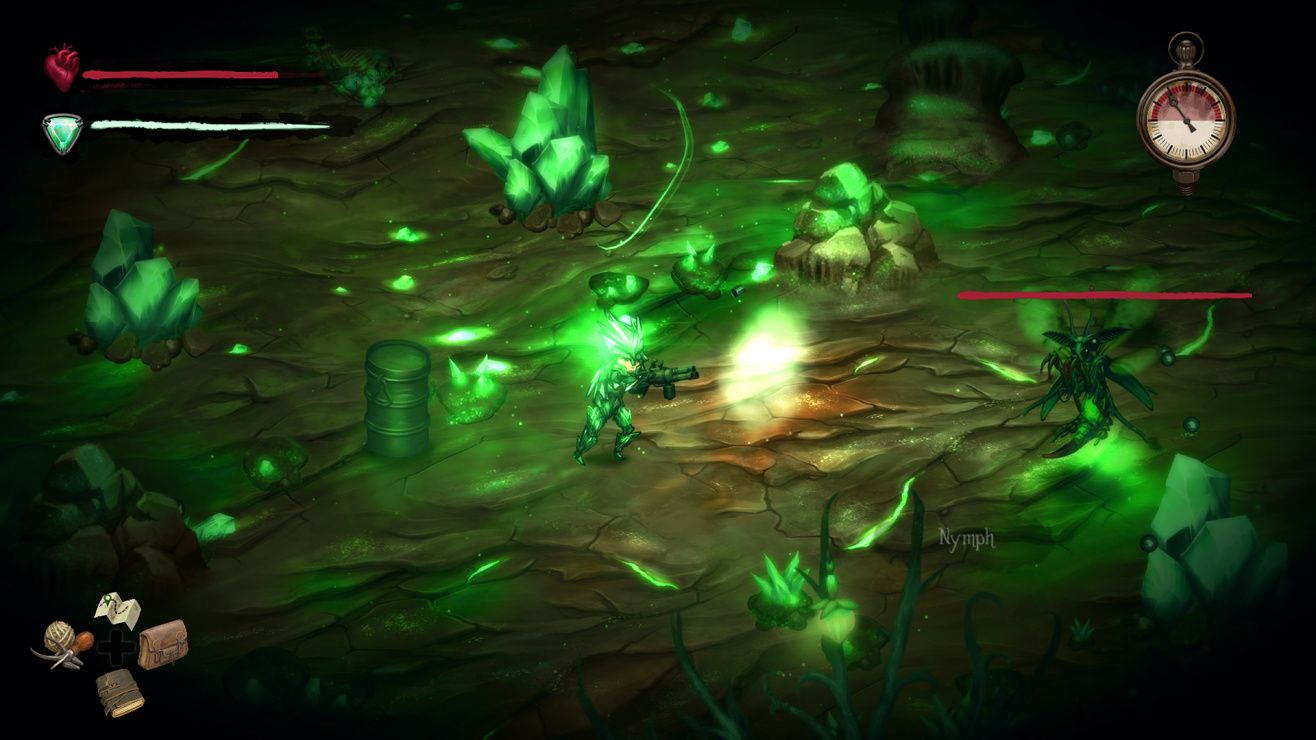 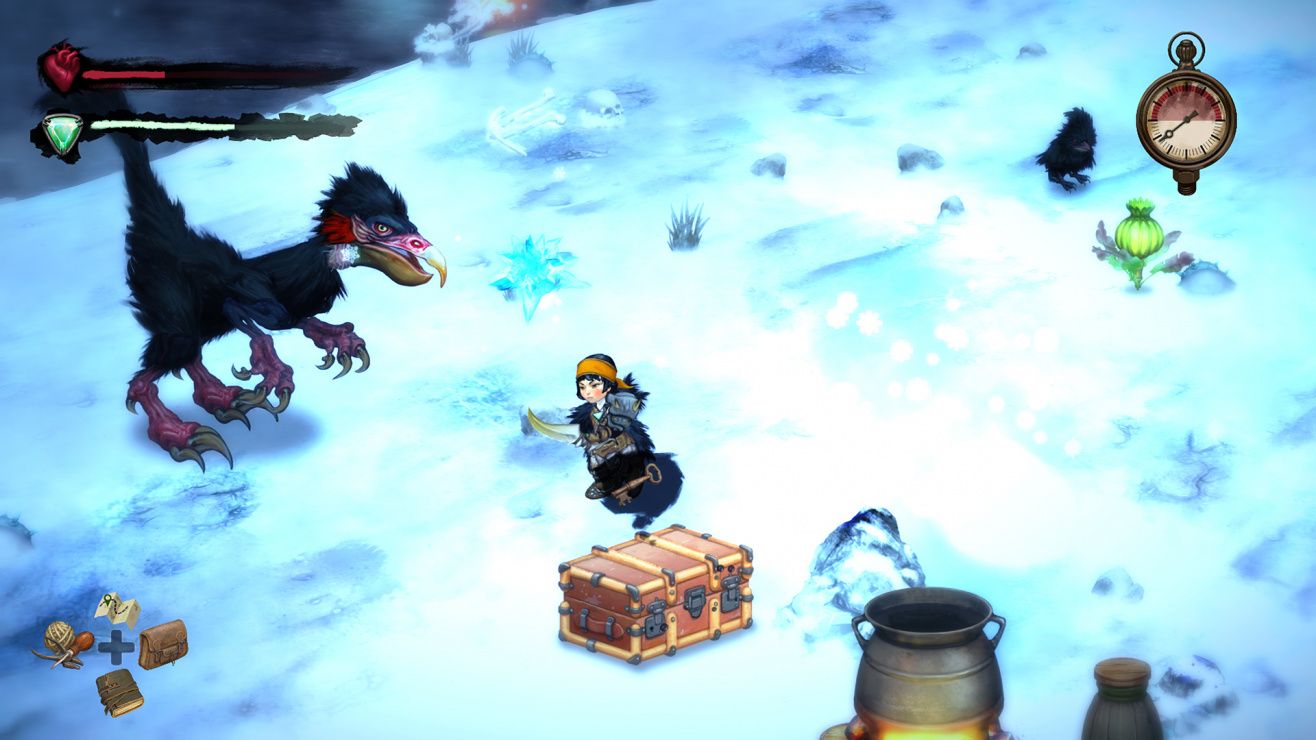 PC Steam Console Playstation Xbox indie adventure Nintendo rpg survival 2d crafting
Smoke and Sacrifice is an open-world, narrative-driven RPG, where exploiting living ecosystems is the key to your survival. Craft, fight, survive and explore the huge open world in this beautifully hand-painted, gothic adventure where every character has their tale to tell. Sachi’s home is the one tiny patch of fertile land which remains in an icy wasteland of a world. Her farming community thrives thanks to their devotion to the blazing Sun Tree, which replaces the lost light of the failed sun. After sacrificing her firstborn child to the Sun Tree, Sachi discovers a darker secret beneath the aura of priestly benevolence. Will she discover the truth hidden in the secret underworld, or perish in its swirling, deadly smoke?
Share Share Share
Promote for 50G

It is an open-world, narrative-driven RPG \ Survival game.
This Game is like other Games Niffelheim and Don't Starve Together. (Single Player Game)
Excellent Graphics, Good Sound Effect and Animation with interesting Storyline.
Really Appreciate Hard and Good work of Game developer.
it is a Story about three Traitor Priest and Brave SACHI and her Child LEO...... OVER ALL FULL ENTERTAINMENT.
I have play SMOKE and SACRIFICE near about 50 Hours and Unlocked all Achievements and Crafting Items and NOT FOUND any problematic things or any BUG in this Game.
if you like games with Craft, fight, survive, adventure and explore then it is BEST for you. Just keep patience and Follow the Quest.
ABOUT GAME PLAY :- If you will try to compare this game with other game you played before than you may not like this game, because it is for Unique players, who want to experience little different than as usual game. it is depending on you how you want to play it.
I will advise you, During play first set your mind what you want to do and plan accordingly you will always find way if Follow the Quest. otherwise you will wander here and there without AIM. if you will follow the quest it will lead you to next quest. you will find your requirement to achieve your quest and I will suggest concentrate on that, whether you need to upgrade Armor to help against harsh environment of game or you need weapon upgrade to defeat any boss Animal or ghost, or you need helpful stuff like Recipes which help boost your health, attack or resistance against special attack of animal, boss or harsh environment of game.
THE MAIN AND WINNING QUEST IS - TO SAVE LEO (SON OF SACHI).
OVERALL HIGHLY RECOMMENDED to buy it. Worth of money .
WAITING FOR another Adventure of Sachi in form of EXPANSION WORLDS \ DLC.
WITH MORE SIFI CRAFTING Items and MORE challenging Worlds.
---------------------------------------------------------------------------------

After experiencing the full game and unlocking all achievements, I rate Smoke and Sacrifice a 7/10.
The story is flawed at points, but the interesting setting it created was good enough for me to not mind these flaws so much. Not a super amazing game, but still a good game that I'd recommend.
I see a lot of people comparing this to Don't Starve, so let me make this clear... While there are similarities to Don't Starve, there are also many differences:
1. This game is more forgiving than Don't Starve, and offers you many save points.
2. The survival mechanics in this game are much simpler than in Don't Starve.
3. This game is far more focused on the story line than survival.
4. The map is not randomly generated like in Don't Starve.
5. The game progression is linear, and you are not directionless like in Don't Starve.
This game is more of a adventure/rpg game than a survival game, so keep that in mind when considering buying.
I will say that 20$ is rather high. I myself got this game from a humble bundle 1$ tier, and can't see myself having bought it without a discount. If you are interested in buying it, I'd recommend adding it to your wishlist and waiting for a sale.

Smoke and Sacrifice is a Hack n Slash with LAYERS. The only warning / advice I offer is to save, and to save often. Unlike other titles, Smoke and Sacrifice does NOT make an audible sound to alert the player of low health.
Game progression is built on the player's discovery of 'crafting recipes', (namely those for shoes). The armors give the player abilities to survive in different climates, and weapons shape the game play. Not once did I think any of my weapons sucked, until I earned a new type. Equips can be upgraded (a total of twice) by adding preset materials to them.
Those who know of Secret of Evermore may find a few similarities. I had a lot of fun playing this title. I seriously look forward to a sequel, should we be blessed with one.

Had me enthralled from beginning to end. A great little game. Challenging in all the right ways. I was sad to have finished it so quickly.
Suggestion. Find a box, store everything! You think it isn't important?... WRONG.

Smoke and Sacrifice are an adventure survival game.
The game levelling mechanics are you have to unlock better equipment by exploring the map to find recipe scattered across the world. Items are found from special chest, gathering from the environment, defeating creatures, or doing some quests.
The enemies have unique pattern of attack that you have to learn to face them properly. Each of the enemy have items that drop for crafting equipment, cooking, or just directly consumed.
The story itself are good and have great world building. The artwork are not up to my taste initially, but eventually it grows on me.
The only concerns are for achievement hunter, you can miss some achievement if you finished the final main quest before finishing the side quests. But, you can just email the devs and he will reply and help you modify your save game.
You will have lot of hours enjoying this game and finding out about how the mechanics of the game.

A very pretty game, in it's own artistic style. Has an interesting story, if not a bit derivative. Unfortunately, it has pretty bad selection detection for clicking to pick up objects. So, trying to click to catch a fly, for example, is a bit of a PITA. It's also really hard to pick up things if there's quite a few different objects in an area. They'll block each other.
I get the feeling a lot more effort was put into the artwork than the programming.
Pretty challenging point and click 2D action RPG with an interesting style. Feels very independent though, and not in a good way.
It suffers from a lot of grinding as you run around and collect the ingredients for different quests and to create various items.
If it looks interesting to you, might be worth getting, but maybe not at full price. Not exactly a bad game, but it's a bit of a time suck.

Solid little game! The controls are sometimes challenging, the inventory is always full and picking up items behind other objekts is impossible from time to time. Beside these for me minor problems the game keeps you entertained with a well-constructed storyline, an interesting gameworld and beautiful artwork.