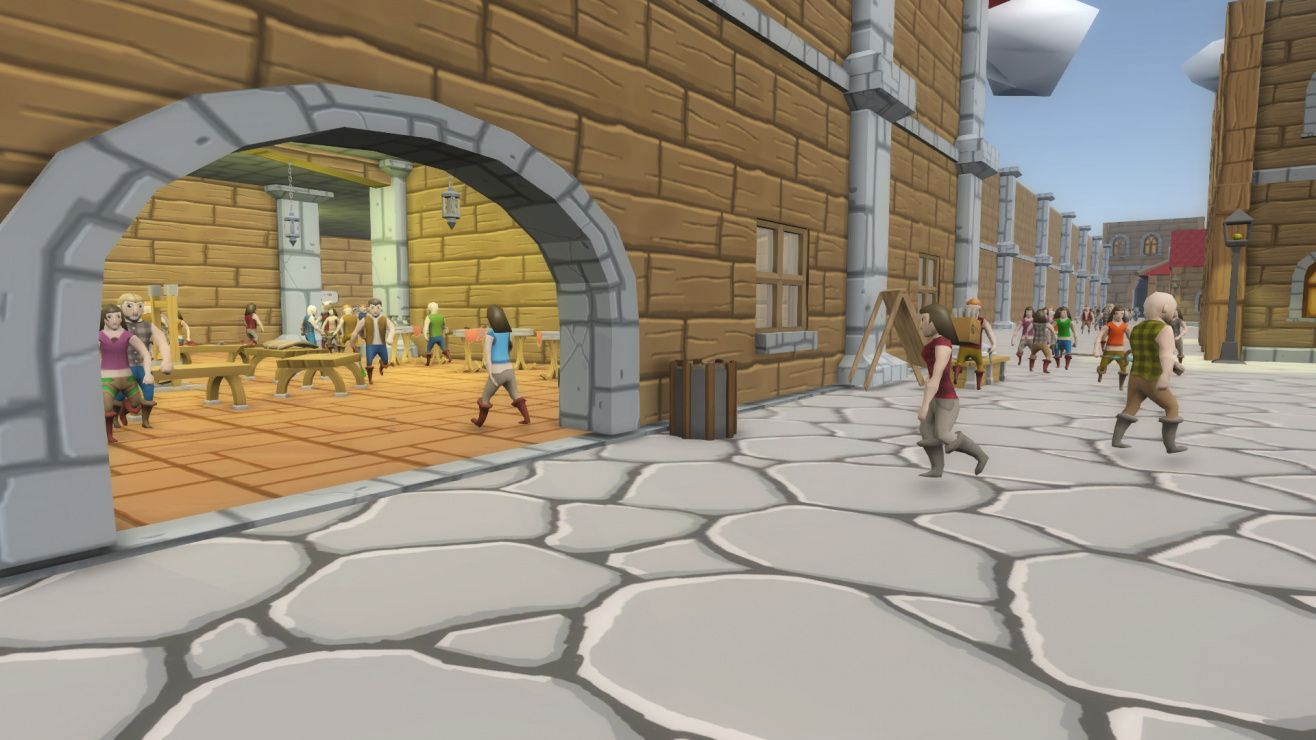 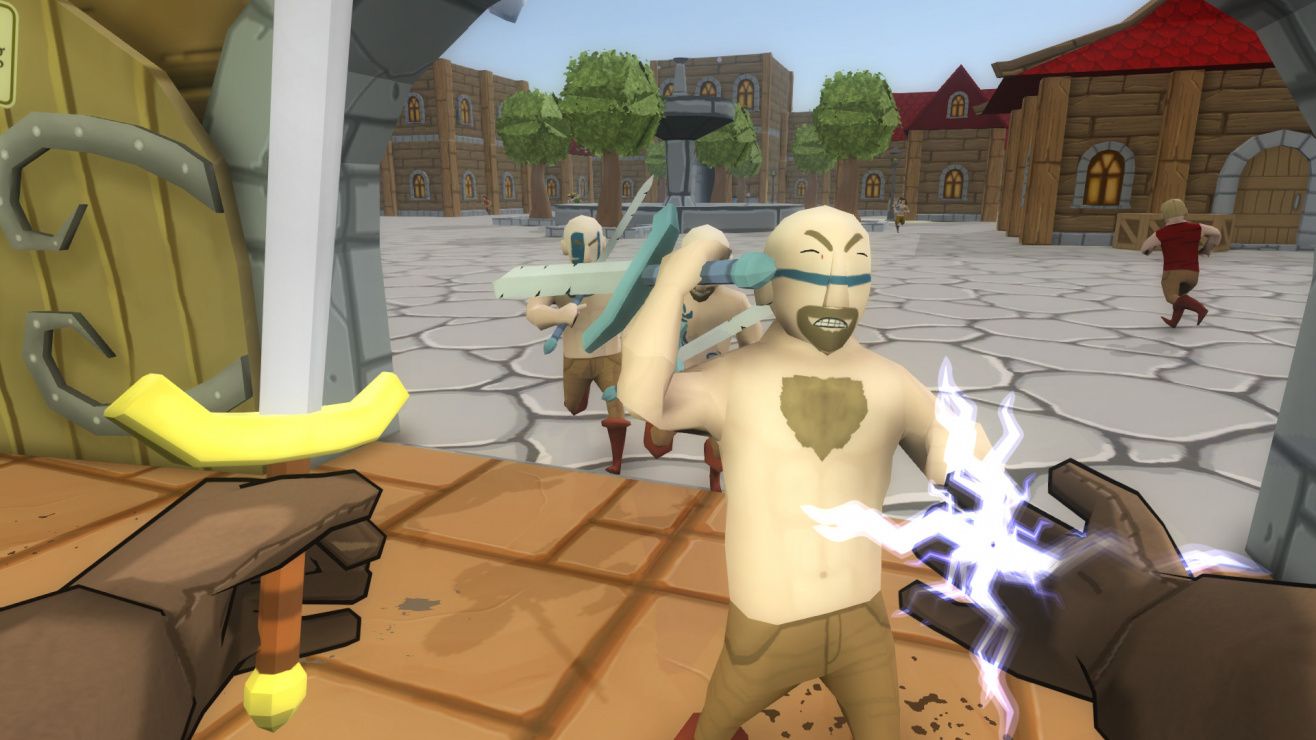 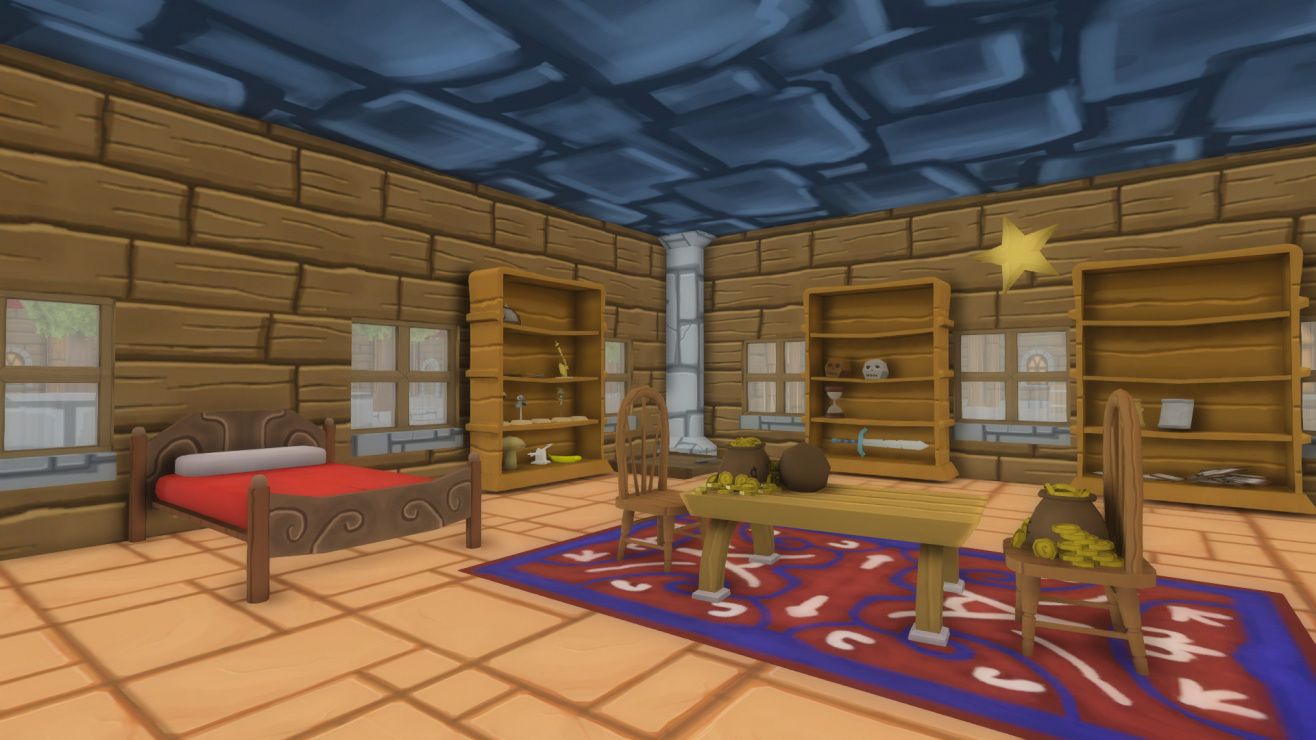 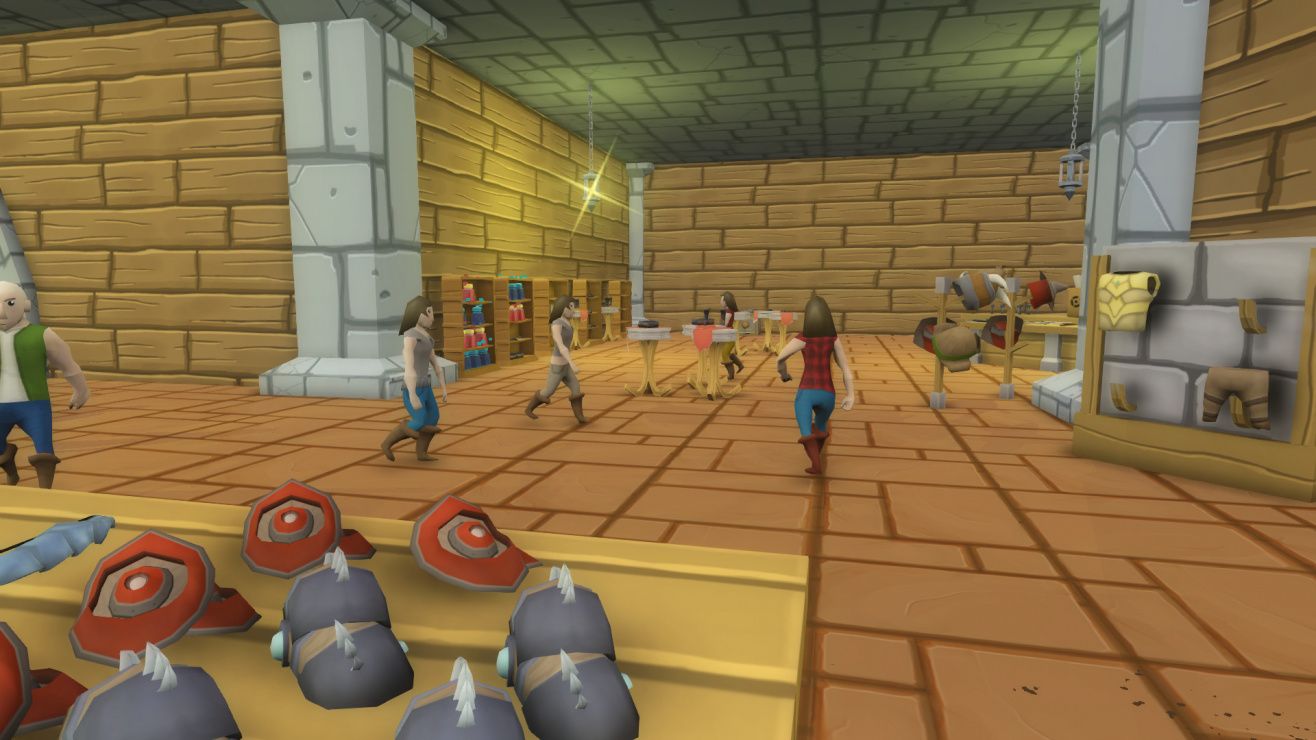 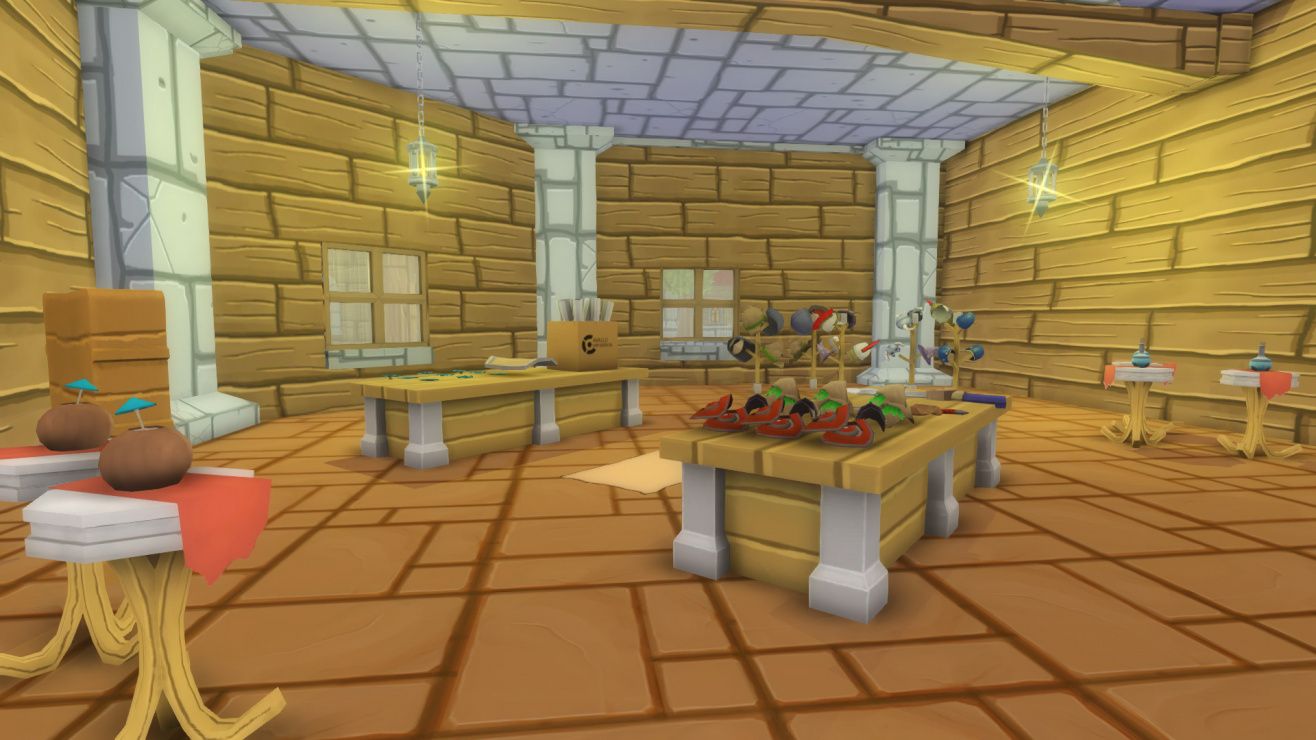 adventure economy funny indie management multiplayer rpg sandbox
Take a magical journey back in time to CREATE your own fantasy retail business. Starting from scratch with a few shelves and limited stock availability, plan your displays and price your wares competitively to attract the most customers. DEVELOP your business by working out the perfect product selection to keep your customers returning. Will you be the Selfridges or the Primark of this fantasy world? Setting prices too high will attract the most theft but too low and you will be out of business in a puff of smoke. Putting in products pitched at the perfect price is key to surviving in this rough, tough trade.
Share Share Share
Promote for 50G

Oh well, the first game where I was selling 24/7 and loved this game. Open your shop, buy some swords, sell them, kill barbarians, cry cause nobody wants your Beets and Weeds, close your shop. Rinse and repeat, baby! There is not much progress in this game when you finally get to day 20 and you basically have everything you wanted and needed, after that its only selling the same items but ya know I gotta get my achiv for 365 days played.
+good idea
+graphics are extremely simple but yet so cool
+changing weathers? yes thank you
+OH MY GOD I CAN FINALLY JUMP
+can kill bad people
+can open your own bar and make fun of how dumb are they cause they gotta buy all that expensive beer and meat
+yaaay got my own garden
+yall those funny names and references.. im dying everytime i notice them
-not much to do after 3-4hours of gameplay
-not many items to sell
-small shop

It's really good game about selling stuffs in medieval time, but it seems kinda buggy.
It would be nicer if this game get RPG stuffs, for example if you can go to dungeons and farm items, like Rogue-Like. That would be must-buy.
But still, its not bad.

I presently have nearly 30 hours in this game and am not yet tired of playing it. Aspects of the UI can be a bit finicky, and managing stock/stocking shelves has its frustrations, but the game has been stable, has considerable depth and feels reasonably polished and complete.
Some of the complaints I see in other reviews seem a bit unfair, particularly the suggestion that the game is incomplete. There are aspects of the game, such as crafting, that could be fleshed out more, but the mechanics of running a shop and buying and selling inventory is complete and satisfying. I don't find the game buggy or unstable running on linux. Customers do odd things like walk through tables but this doesn't bother me or detract from the game in any way. From the little I have been able to find online this is a small developer who seems to have taken the game as far as he can and I am enjoying where he has taken it. I think the result is a fun and unique game that has held my attention for many hours. I don't think it is intended to compete with AAA titles but it doesn't cost $60 either. It is $5 and I consider it an excellent value. There are many games that have given me much less enjoyment for far higher cost. If you are looking for a game with extensive crafting, economic empire building or 1st person combat with thieves and barbarians then this is not the game for you. If you want a game that simulates building up a large store over time and buying and selling merchandise then I think most people will be quite satisfied. The title shoppe keep gives an honest and accurate indication of what it is and what it is intended to be.

Remember that one Time when you needed to buy a new Sword in a RPG Game, but the Trader wanted like a Trillion Gold, Septims or Bottle Caps because it was "Enchanted"? Now you can take Revenge and sell overpriced Swords and Potions to clueless Customers.
P.S This Games makes me feel like Mr. Crabs. Dunno why.

This game... ThiS game..... tHiS gAmr. ThIs game is verie gooed And i lovie so much I can stop pating it Tat me and my sistrer have stoped haing sex, my mum is vaery happie that we have stoped the sex coz she thinks that it is good form mie lovie all of you grate work love love

Shoppe Keep started as an interesting take on the adventure fantasy genre and turned into a fully fledged game through a very long development process and was helped along by some publicity by Youtubers like Sips.
Here's a not-so-brief list of all the games I have bought so far because NerdCubed, Many a True Nerd, Sips, the Yogscast, or Scott Manley made a video about them:
Shoppe Keep, Prison Architect, StarMade, KSP, Cities Skylines, Software, Inc., Planet Coaster, E:D, The Escapists, FTL, Besiege, Subnautica, Tropico, Hotline Miami, Diaries of a Spaceport Janitor, Islanders, Garry's Mod, Worms, Chivalry, Airships, Sins of a Solar Empire, Absolute Drift, Overgrowth, Nidhogg, Mirror's Edge, Broforce, Rodina, Alien: Isolation, Orcs Must Die, Sir you are being hunted, Space Engineers, Papers Please, Gunpoint, Guns of Icarus, Dishonored, Rocket League, Robocraft, Rollercoaster Tycoon
Of course, the actual mileage I get out of these games varies greatly. Shoppe Keep is in the same slightly disappointing category as Software, Inc. and Airships, being early access indie games with very small teams (often just 1 person) that I pick up because they look interesting, play for a couple hours, get tired of their simple, kind of unpolished tone, and put away until they are a completed product, which never really actually happens.
I haven't played this in a few years, and I think the dev recently announced Shoppe Keep 2 so this one might be finished with now. Who knows, maybe it has come a long way since last time I picked it up.
Recommended to anybody who just really loves the feel of the basic unity engine