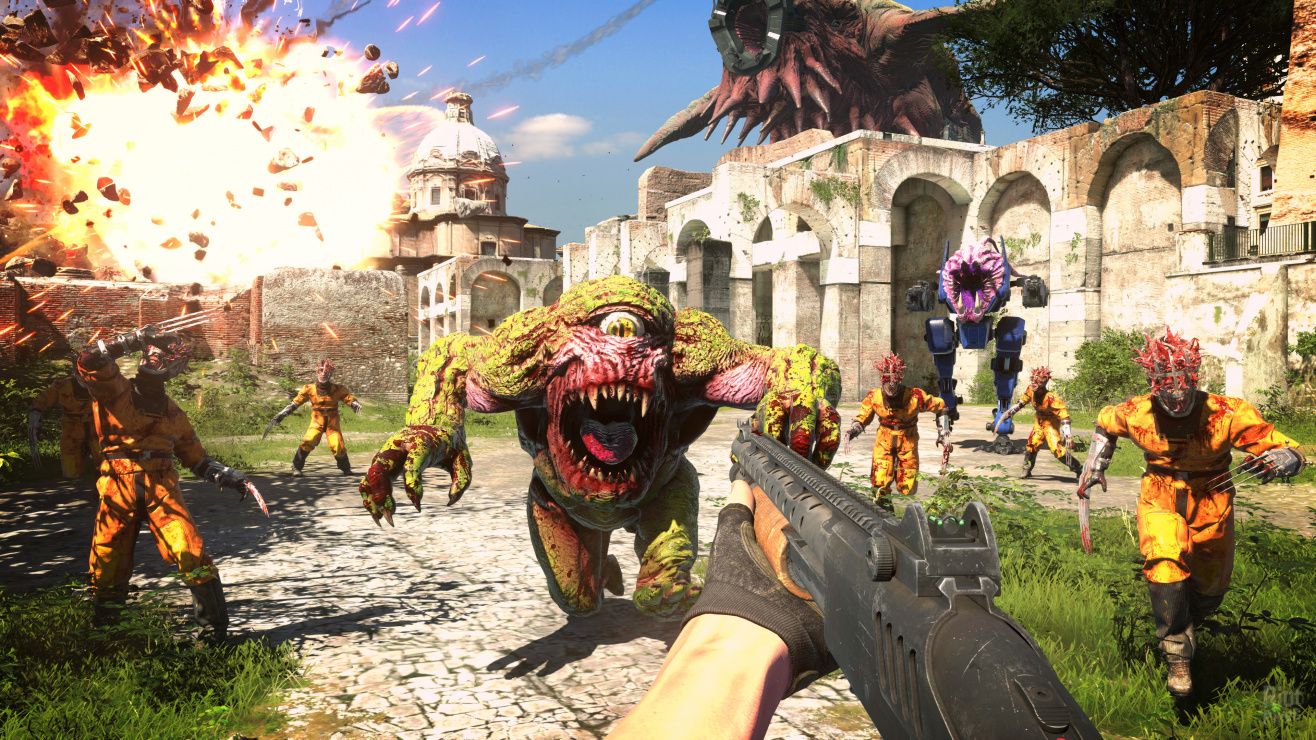 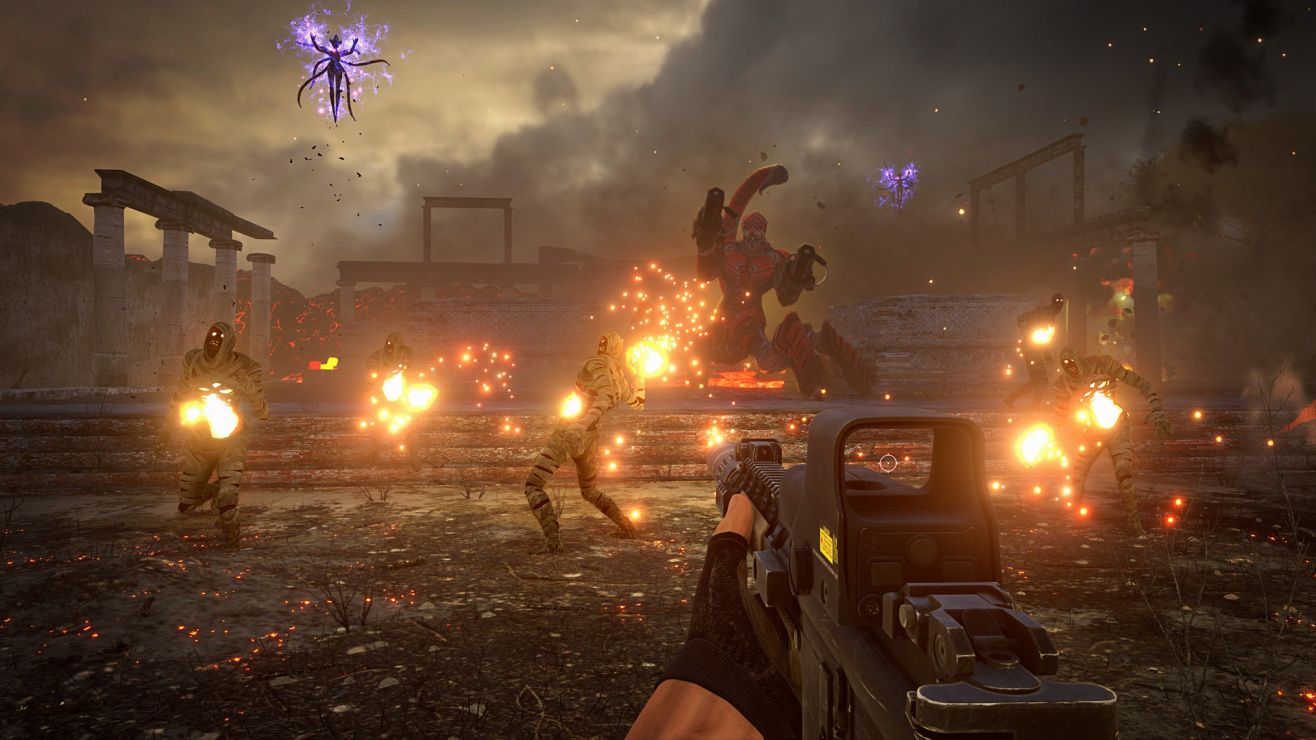 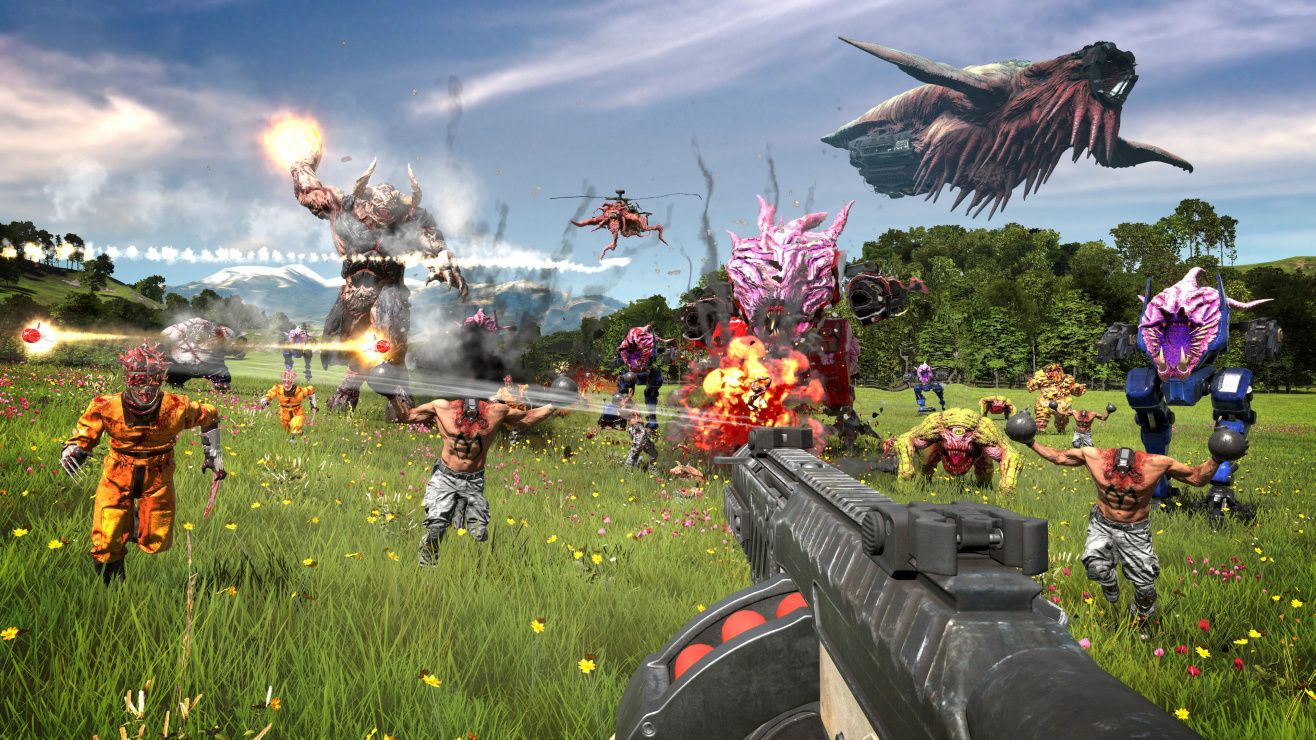 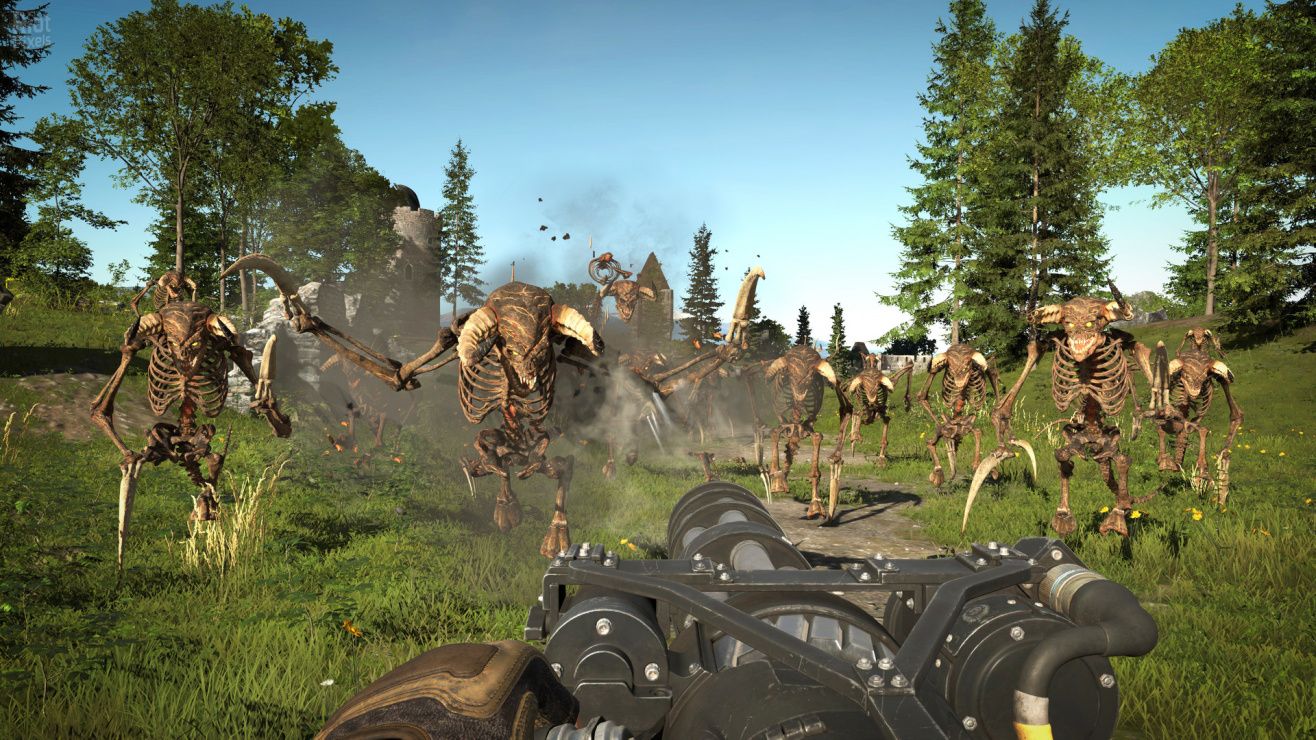 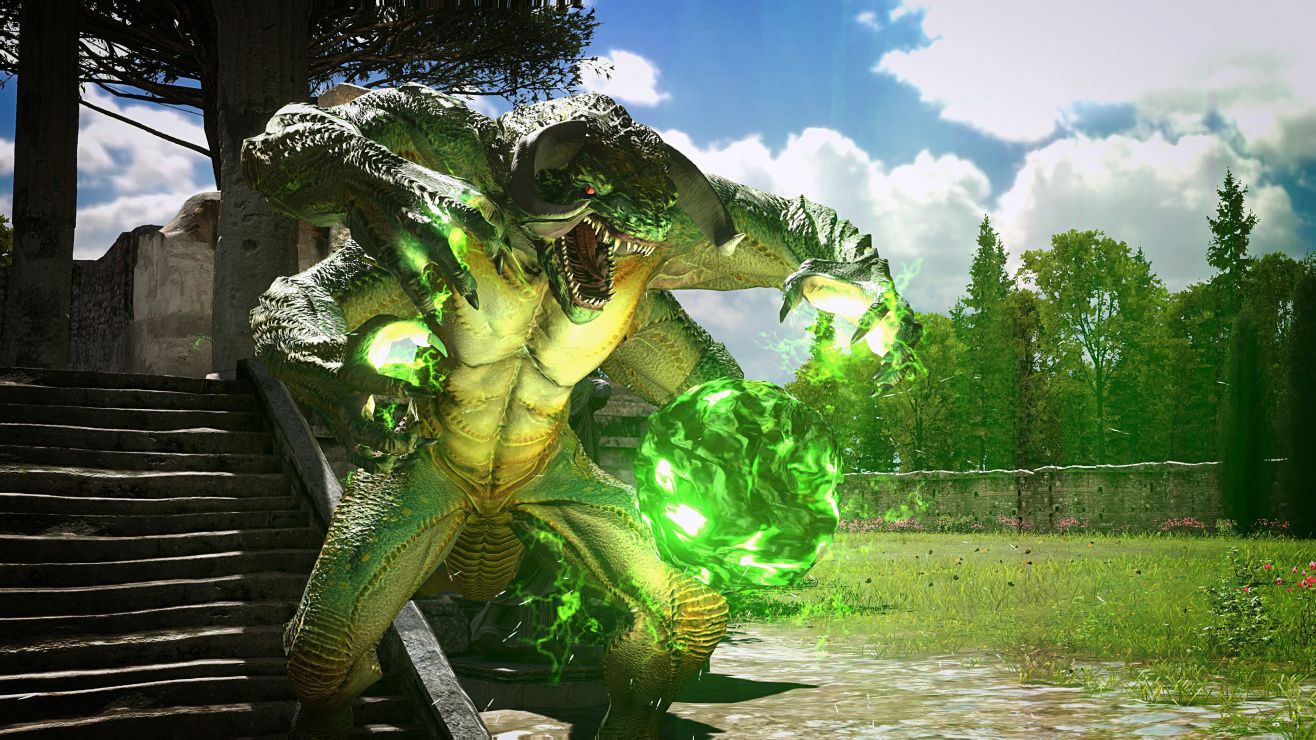 PC Steam indie action adventure singleplayer co-op shooter hardcore bullethell
Serious Sam 4 reignites the classic FPS series in a high-powered prequel loaded with an explosive arsenal, intergalactic carnage, and perfectly timed one-liners. Humanity is under siege as the full force of Mental’s hordes spread across the world, ravaging what remains of a broken and beaten civilization. The last remaining resistance to the invasion is the Earth Defense Force led by Sam “Serious” Stone and his heavily-armed squad of misfit commandos. Croteam returns with a high-powered prequel to the Serious Sam series that scales up chaos to unprecedented levels. The classic Serious Sam formula is revamped by putting an unstoppable arsenal up against an unimaginable number of enemies that requires players to circle-strafe and backpedal-blast their way out of impossible situations.
Share Share Share
Promote for 50G

It's a Serious Sam Game. There's bad guys, there's guns, there's top-tier B-movie humor and one-liners. And yet there's something missing this time around...
Previous entries in the SS series have a sense of exploration and some wild features in the maps. Serious Sam 1, for example, features a few map sections where gravity is messed with, including a great fight on the inside of a cylinder. The wide open maps featured secrets hidden all the way Out There Somewhere. There were some very goofy experiences, like a pair of eyeballs watching you from the sky. A fight littered with bouncy floor pads.
SS4 features none of that. There's still some big fights, but they don't feel as big as previous games. There's precious few open spaces with much of the fights in controlled city corridors, leading to a strong rail-like feeling. The cool pseudo-primitive environments are nowhere to be seen. There's a wonderful jaunt through the countryside at one point, but that's nothing like fighting your way to a giant ziggurat and wondering what's inside. No sense of wonder.
It isn't a bad game, not at all, and it's worth the price of admission, but it's missing a lot of the whimsy and massive scale that made previous SS games so special.

*fighting a giant tentacle monster*
"What am i a japanese school girl!?"~ Serious Sam

Not sure where the hate is coming from because this is hands down the best Serious Sam to date. The only major complaint that I have are the performance and stuttering issues, which should hopefully be resolved in the future.
Pros:
- best graphics in the series (anyone who thinks the 3rd game looks better needs to have their eyes checked)
- some of the new weapons they added like the auto shotgun are awesome
- feels very much like a SS game with the gameplay and humor
- they have added gadgets like a black hole device and upgrades where you can reload while sprinting and dual wield weapons. These to me make the gameplay so much more enjoyable compared to past entries, including the first and second encounter
- There are also optional side objectives which reward you with something good like a grenade launcher attachment for the shotgun or a lock on for the rocket
- vehicular combat
Cons:
- graphics do not look the best for 2020-2021, but this isn't a AAA studio and graphics do not make a good game
- stuttering and framerate drops (less than 10 fps sometimes when I load a level) even on high end hardware such as a 2080ti and a ryzen 9 3900x
- takes forever to load a level even on an NVME SSD
- The whole 1 vs 1000 advertisement was a lie. The first mission initially feels like that but you can only shoot about a dozen enemies. The rest are in the background basically.

During the walkthrough, I had dual feelings: how bad the game is and how I enjoy shooting hordes of monsters.
Hold "S" and shoot
Gunplay is good: many weapons received alternate fire mode, balance tweaks, dual-wielding. Still, SS4 gunplay is far behind the latest DooMs. Too fast enemies and too slow weapons switching (even with the skill bonus) make it nearly impossible to perform combos. Every time I tried to play "smart" by killing enemies most effectively using the most appropriate weapon, I got overrun and died. Serious Sam is all about dumb gameplay: holding S and shooting. Despite the weapon arsenal is quite impressive, you don't have time to switch weapons most of the time. Shot Minigun until it is empty, then switch to something else and repeat. People are calling SS4 a "running backward simulator", and they are right.
"Bigger" does not mean "better"
Other than gunplay, everything else sucks. Croteam has borrowed many modern features for other games: open world, skill tree, inventory items, etc., but failed almost everywhere. There is no open world in SS4 - it is more like huge deathmatch arenas. The Second Encounter had big arenas (and most of them were pretty good). SS4 has like 10x bigger areas than TSE. And bigger does not mean better. When you are not running backward from monsters, you are running forward to collect items that are scattered across the huge areas. For instance, instead of putting one item of 100% armor on the map, they placed ten 10% armors, 100m apart from each other. So you have to travel 1km just to get the full armor. The same story with health and ammo.
Croteam brought many bad design decisions from BFE. For example, parkour. If you hide items behind the series of trick-jumps, then at least make sure to implement reliable movement physics. Which is not the case of the Serious Engine. Jumping wasn't good in any SS games, but at least the older games didn't require a lot of jumping, BFE brought that crap, and SS4 continued. Moreover, you are never sure if the jump is possible or not because there are plenty of invisible walls on the map. So the same complexity jumps sometimes are possible, and sometimes not - purely depends on the level designer's wish. The same applies to destructible objects.
TSE still is the best
I find Serious Sam 4 better than BFE, but simply because the latter is not good either. If you are a fan of SS games, like myself, then SS4 is worth giving a try. Otherwise, it is not worth the money. Still, I think The Second Encounter is the best game in the series.

Serious Sam 4 is a first person shooter where the player takes on the role of Sam Stone, an old school 90’s action hero, defending Earth from alien invasion.
The main signature of the Serious Sam franchise is that most combat encounters contain hundreds of enemies, so many that after a few minutes you’ll start to wonder if they’ll ever stop spawning, and SS4 continues this tradition of lengthy battles.
There are a large number of enemy types to fight against, including minigun wielding scorpions, huge mechs who fire lasers or rockets, headless screaming suicide bombers, werebulls, flying harpies and drones, green fireball throwing reptiles, those really annoying Kleer skeletons, and many more.
Sam can use a wide variety of weapons including pistol, 3 different shotguns, assault rifle, minigun, sniper rifle, grenade launcher, rocket launcher, laser, cannonball launcher and devastator (functions like a sniper rifle but fires explosive rounds). And of course, like all the best FPSes that focus on fun instead of realism, you can carry all the guns simultaneously.
Some weapons can be upgraded to use alternate fire modes such as the shotgun having an under barrel grenade launcher, the rocket launcher can lock on to an enemy and fire five rockets simultaneously, and the laser turns into a continuous beam of energy.
I usually play FPSes on the hard difficulty setting, and I think SS4 is one of the most challenging FPSes I’ve played recently. I got stuck for a while on a few difficulty spikes, usually where the player is locked into a small arena, so the hundreds of enemies (especially the ones who charge into melee range) would back me into a corner with nowhere to escape.
Sam can use a few powerful gadgets to deal with these massive groups of enemies. One is a decoy that will distract enemies so they shoot at the decoy, another slows the movement of every enemy in the area for a few seconds, you can create a black hole to suck in nearby enemies, there’s a mini nuke which does exactly what you’d expect, and an extra life which lets you respawn when you die.
These gadgets, and some of the weapon upgrades, are usually given as rewards for completing side quests, or can be found hidden around the levels. It took me 22 hours to finish the main quest and I think I did all the side quests (I’ve got most of the achievements anyway). The story is kind of dumb, but I didn’t really expect to find a well written story here, so I’m not going to count that as a negative. It would be like complaining about the story in a Jason Statham movie.
Unfortunately, while the gameplay is fun, the game does suffer from some technical issues. My PC matches the recommended graphics card and memory shown on the store page, and I have a better processor, however the framerate isn’t always stable. I don’t think the game engine can really handle so many enemies on screen, especially during the later levels which are set in an urban environment.
The game also has some quite bad texture pop in, which is especially noticeable during cutscenes. For example, Sam would start the scene wearing a plain white shirt and then the bomb logo on his chest would appear after a couple of seconds delay. I also saw similar issues with other character models and background scenery.
Overall I think fans of the First Person Shooter genre will enjoy SS4’s fast paced action, but due to the recurring technical issues I’d strongly recommend waiting for a sale.

Serious Sam was my childhood game. THIS Serious Sam 4 did not let me down even a moment. I see a lot of complaining from the players like, 2012 graphics or like, it's not as good as the previous games. I beg to differ. This game gave me the adrenaline that was lost some time ago. You know, playing games is great but after growing up, sometimes you don't feel that excitement or heart-pumping fights anymore. This game revived that for me.
TLDR; It's a great game even if you don't know Serious Sam before.

This is the only FPS Game when you press 'S' more than 'W' xD.
Very nice gameplay and graphics, really cool characters and great multiplayer experience!