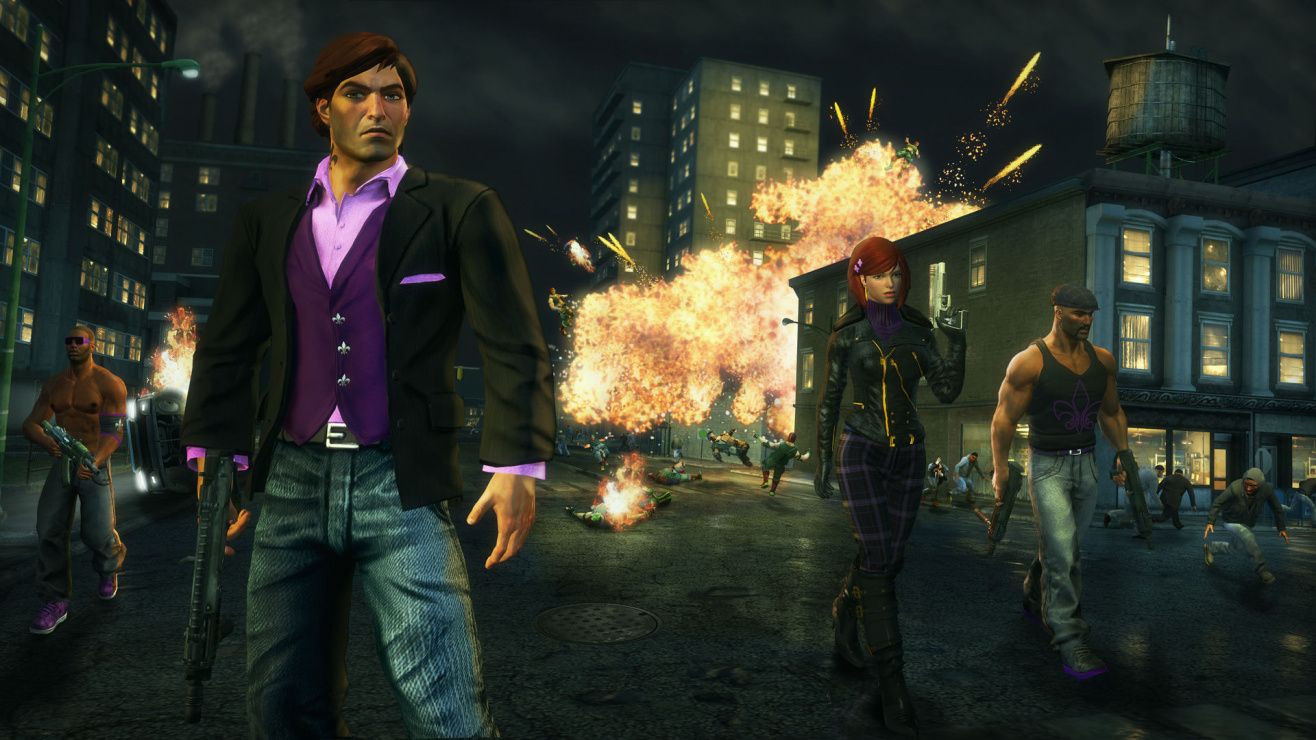 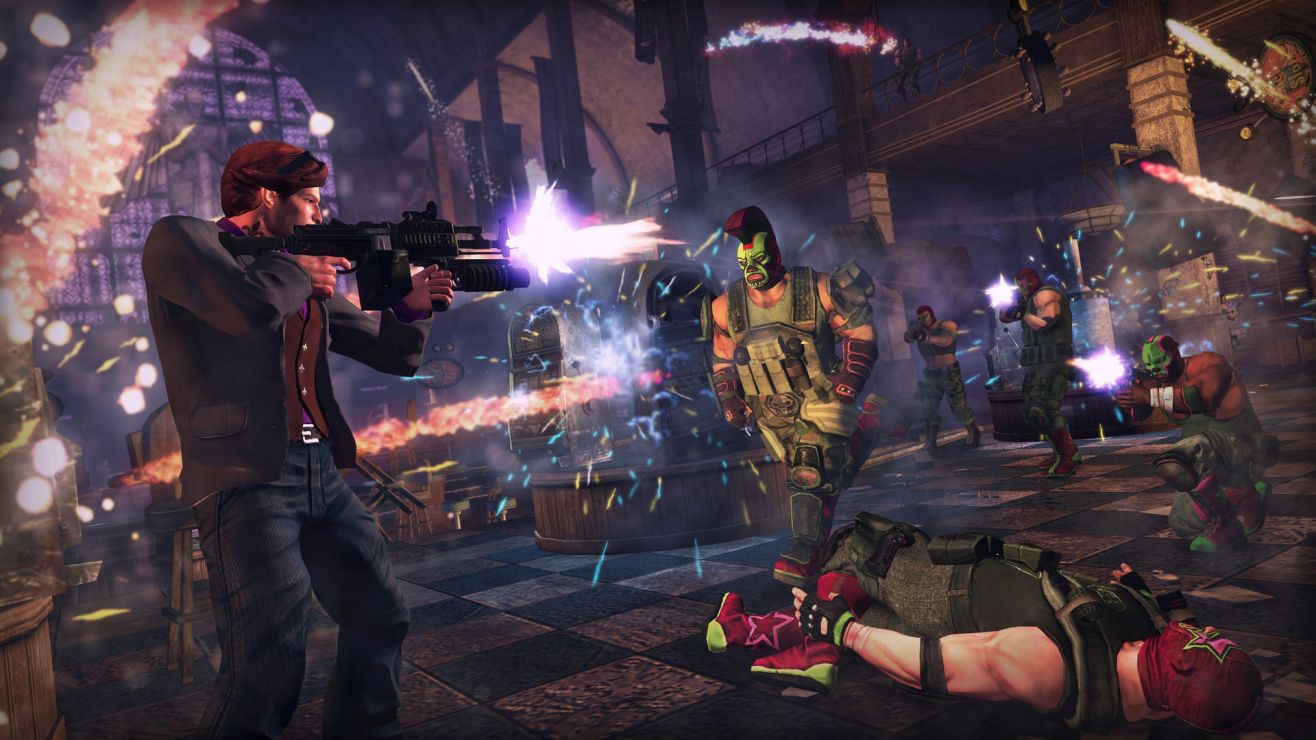 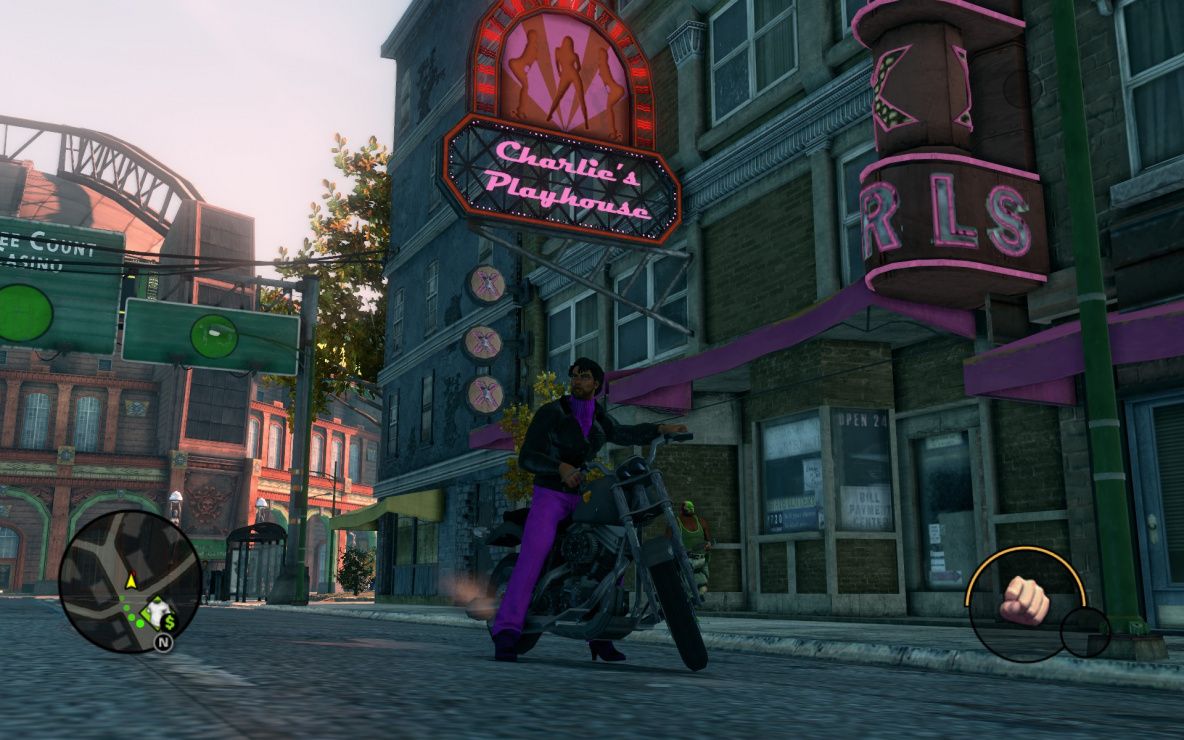 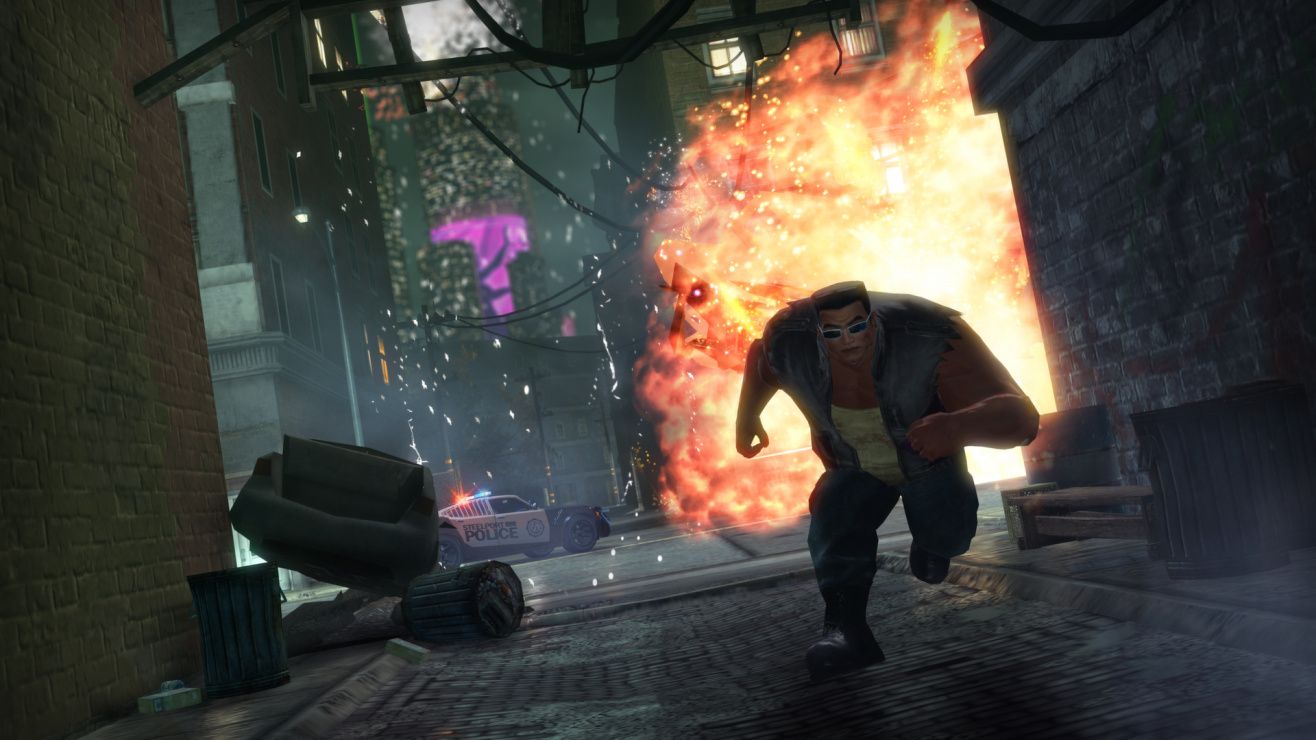 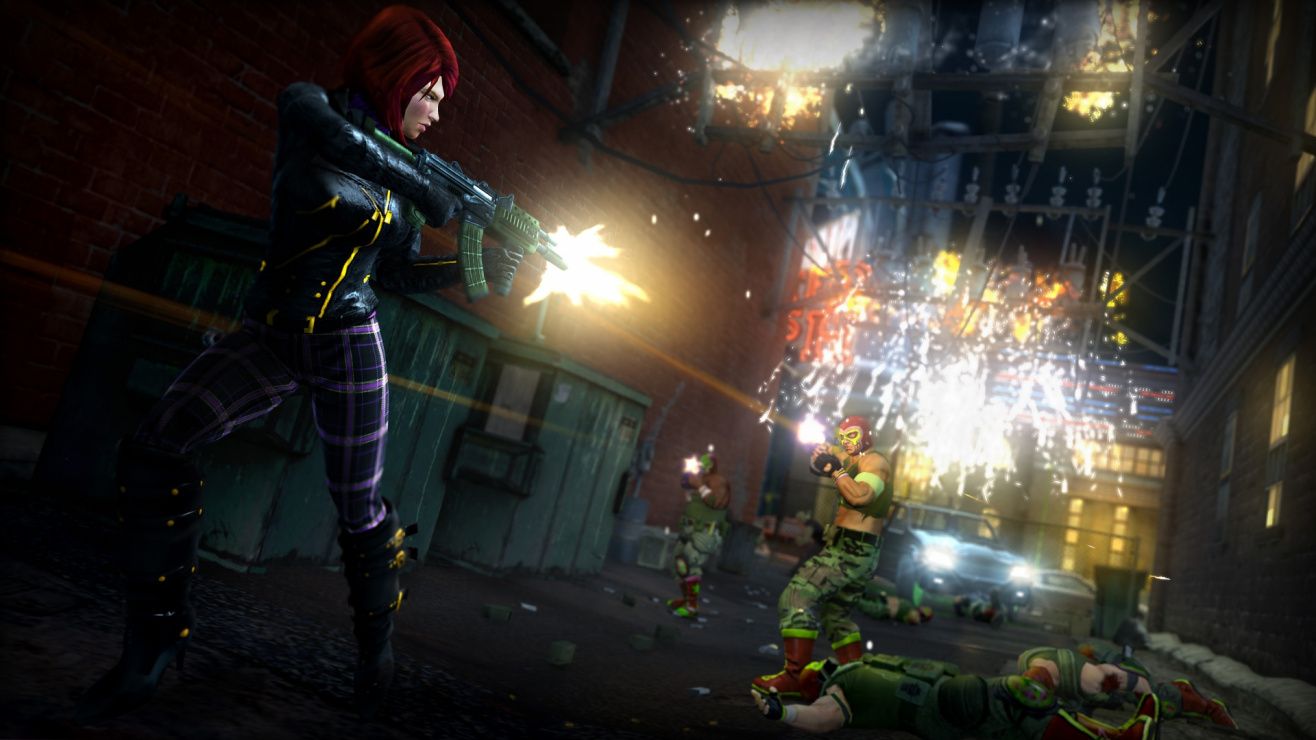 action adventure co-op comedy funny open world shooter singleplayer
Years after taking Stilwater for their own, the Third Street Saints have evolved from street gang to household brand name, with Saints sneakers, Saints energy drinks and Johnny Gat bobble head dolls all available at a store near you. The Saints are kings of Stilwater, but their celebrity status has not gone unnoticed. The Syndicate, a legendary criminal fraternity with pawns in play all over the globe, has turned its eye on the Saints and demands tribute. Refusing to kneel to the Syndicate, you take the fight to Steelport, a once-proud metropolis reduced to a struggling city of sin under Syndicate control. Take a tank skydiving, call in a satellite-targeted airstrike on a Mexican wrestling gang, and defend yourself against a highly-trained military force using only a sex toy in the most out- landish gameplay scenarios ever seen, igniting a city-wide war that will set Steelport on fire. Strap it on.
Share Share Share
Promote for 50G

Has a "sex appeal" slider

So sad to hear the remaster is being held hostage by Epic. This was my first "GTA-styled" game and I loved it to death. Hours of content even without DLC, and even more content with. Endless fun if you can get a few friends to screw around.
Got it on a Steam Sale way back when and it was easily the best $10 I ever spent. Even now with a $15 price tag it's great value; you'd get way more out of this game than out of two Big Mac meals.

In my opinion, better than GTA.

DO NOT PURCHASE THE REMASTERED VERSION OF THE GAME, THIS ONE IS JUST AS GOOD.
1. Pierce doesn't look like his face is full plastic in this one.
2. Gat doesn't look like a complete asshole in this one, and looks a lot better.
3. Shaundi... well, it looks like they turned Shaundi into a fucking vampire in the remastered.
4. The MAIN CHARACTER'S FACE doesn't work well with ANY cutscenes, either looking like someone ate his last pop-tart or looking like someone hurt his feelings. There's no in between.
Overall: This game is significantly better, some things may APPEAR better in the trailer for the remastered, but this one is by far a more preferable alternative. Please, PLEASE don't waste more than $40 purchasing the remastered version. You can get all the content that it has for just $15 here.

Saints Row 3 is a great open world game where nothing is too crazy, It has some amazing gameplay, ultimate customization, crazy vehicles, built in cheats, It is the ultimate fun simulator for Linux.
Welcome to Steelport, You are the boss of the Third Street Saints, A famous gang that doubles as a brand for everything really, Energy drinks, clothing, You name it. You start the game robbing a bank to promote the Saints Row movie. Things turn sideways pretty soon when you discover it was all a setup. The story takes you all over the place, I would not call it a great story, But it surely has some nice details. I guess you can't have it all, It is hard to get a solid convincing story in a game where nothing is too crazy.
There are a lot of gangs on the streets of Steelport, You have the Morningstar, Luchadores, and the Deckers, They have teamed up together to form the Syndicate. All the gangs have unique vehicles and unique miniboss enemies, Like brutes that can put you through walls or strange laser skaters that can teleport. There is no police, But there is a Special Tactical Anti Gang (STAG) force, These guys have tanks, helicopters even fighter jets with laser cannons.
The game really is over the top, Gang bosses can not be taken seriously, The objectives you have are just crazy, But overall it makes for a great experience, Choices will alter the story, but there is always a obvious better choice. If you want the achievements you will need to play both choices, You can play one choice then reload the save to play the better one. but there are unobtainable achievements due to a function that has been removed from the game.
The Side missions, are maybe just as crazy You have Insurance Fraud where you have to jump in front of cars to earn mooney, Mayhem where you just have to cause collateral damage, Genkibowl which is like a strange game show that kinda reminds me of BattleBlock Theater. Crazy cats letting you complete strange games with risk of death.
There are also missions that are always active like near misses with vehicles, streaking naked through the streets, shoot people in their private parts, blow up Smart cars, and kill mascots for example. These missions offer you some quick experience points you can use to upgrade your abilities.
Everything is upgradable, all untill you are so overpowered, you can't die, Don't have to reload, Have infinite ammo, Can sprint forever, Punch people to the other side of the street, You name it. You can even customize everything, You can mold yourself into anything that remotely looks like a human, Change the hair, the outfit, There are even some options for a voice and a personality.
There is a wide array of crazy vehicles available, Jet cars, Floating bikes, Fighter jets, Helicopters, You can also upgrade them all to make them go faster or make them appear differently. You can change colors for example, But this is Saints Row, Ofcourse it is going to be purple.
The whole game can also be played online with a friend or a total stranger. Literally everything, there is no pressure, and often you find someone who is just cruising around on the other side of the city. But still having the ability to seriously play the game with a friend is just amazing.
There is also a survival mode called Whore mode, Yeah really. It is also playable with 2 players online, I think the idea behind it is great, It offers a bit of a challenge but I think this could have been done a whole lot better. There is an annoying pauze between each wave. You also do not keep your weapons between waves. You can even spawn in vehicles for certain waves. It would have been a lot better if you would just stay in the game, keep your weapons and just see how far you come. Now it feels like it is wave 1 over and over again.
There is not much to do endgame, You can still kill innocent people, or just mess with the STAG in your overpowered state, But this gets bland pretty quickly, The fun is in the challenge, And there is a lot to do, But when you are all done It might be better to just start over on a harder difficulity level.
Overall I think Saints Row the Third is an amazing experience, It has a fun story, exploring the city is great, and there are a lot of things to do. The story is okay, but the story missions are great, A lot of shooting and a lot of fun. I have to give the game a Solid 9.
Follow my Curator Page:
Steam Cloud Save
Working fine
Controller Support
Yes, Xbox One Bluetooth Working
Achievements
Alright, But 100% is impossible
FPS on Ultra
80 - 140 fps
Launch Command
gamemoderun %command%
Issues
None
OS
Arch Linux
Kernel
5.3.7
DE
Gnome 3.34.1
CPU
Intel I7-6800K @ 4.20Ghz
GPU
Nvidia Geforce GTX 1080 (Nvidia 435.21 Drivers)