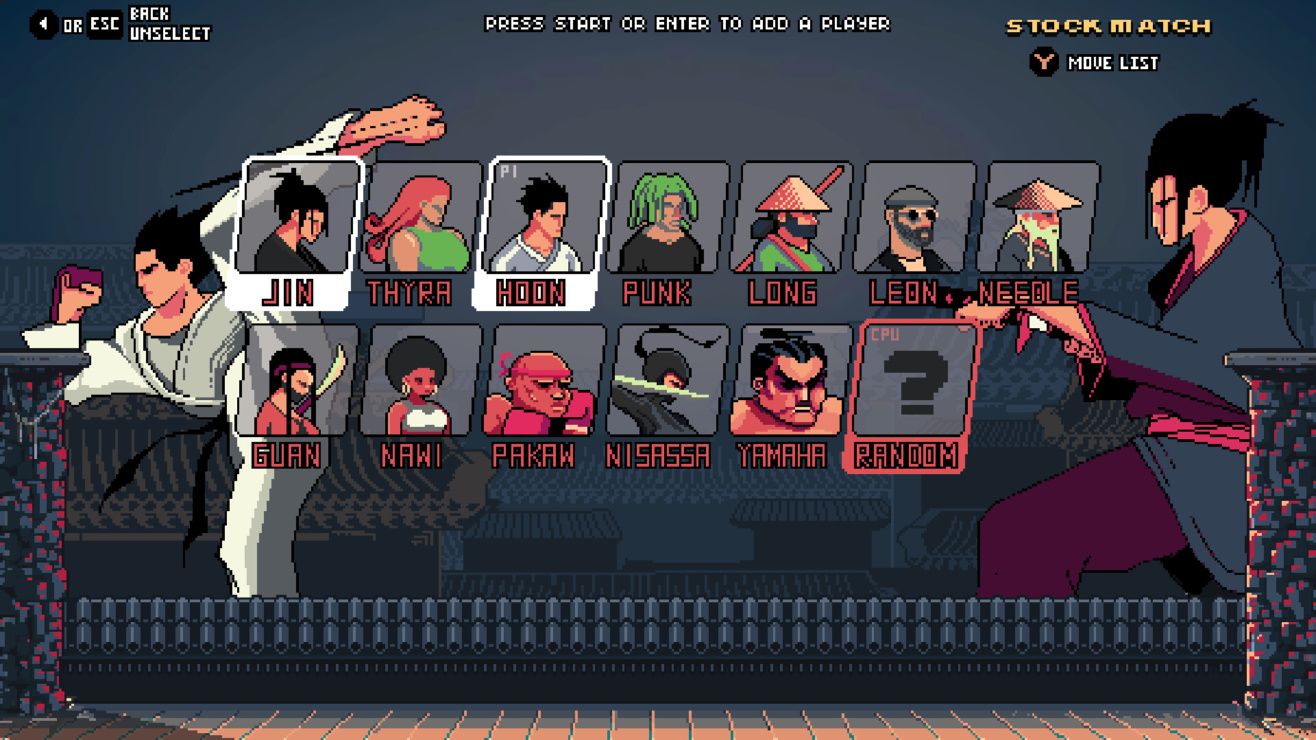 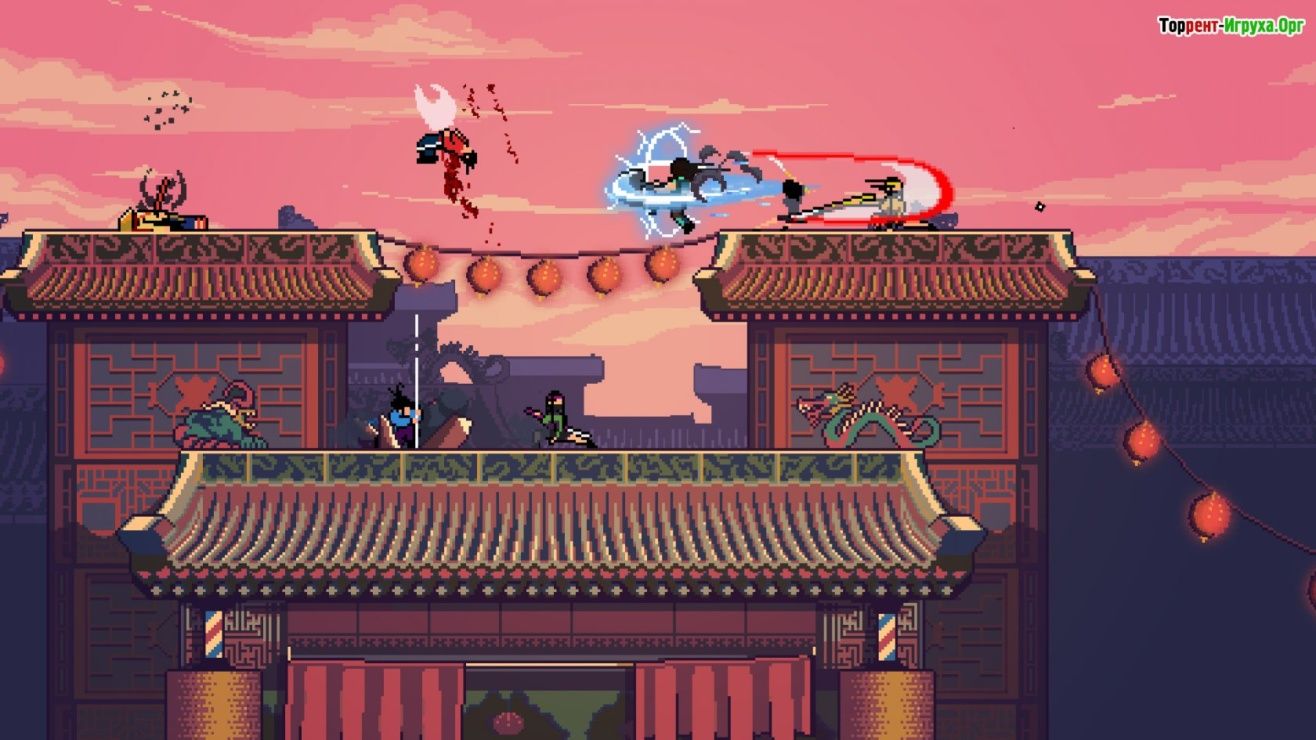 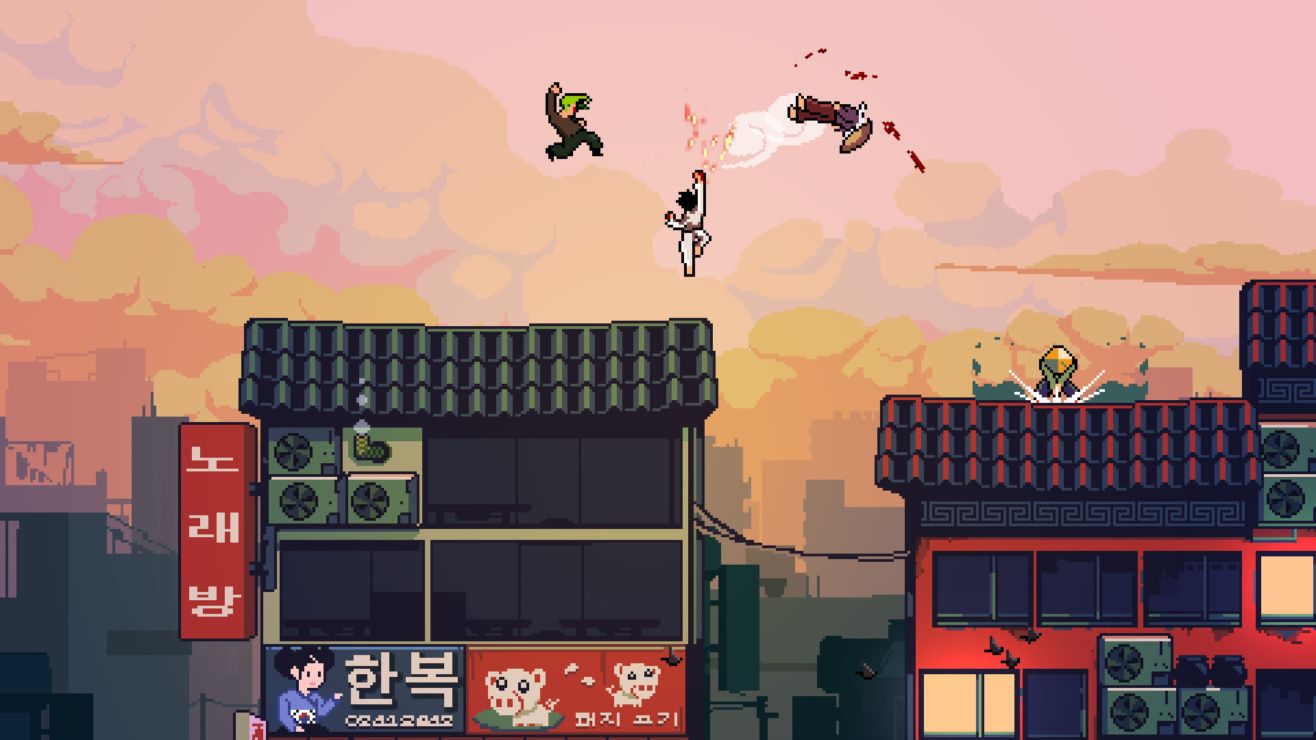 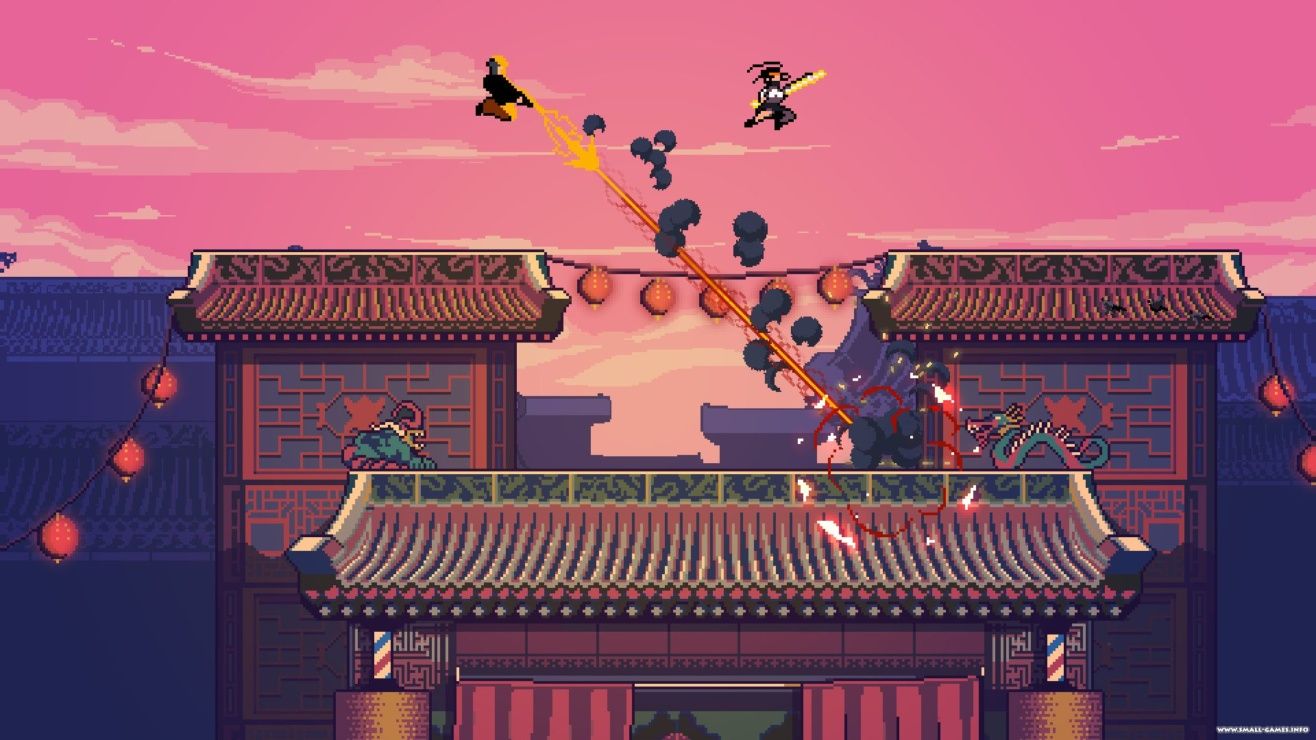 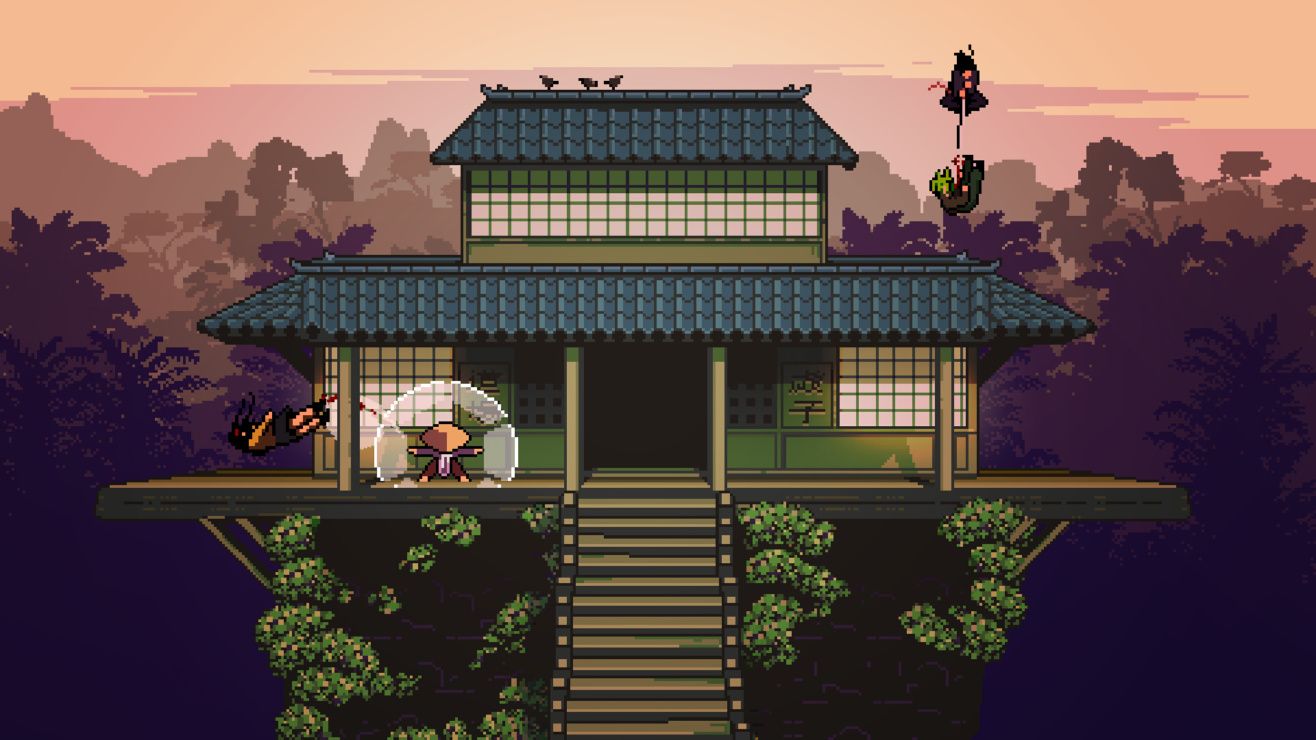 PC Steam action indie singleplayer multiplayer platformer fighting
Roof Rage is a fast paced, easy to pick, hard to master, platform fighter. It is both a party game and a competitive game for platform fighter's players. The scale and speed of Roof Rage allows you to be creative, always producing new combos and pushing the gameplay a little bit further. With the last 5 characters added since the initial release, the game now has 13 characters, each one offering a unique playstyle. You can pick and throw roof tiles, catch them, deflect your opponent's projectiles, wave-dash, parry and smash attack for a finishing move. Pick your stage among 13 iconic, cultural inspired, rooftops.
Share Share Share
Promote for 50G

This game is fire! Plataform fighters with:
-Fluid animations;
-13 chars with a lot of diversity and depth;
-EIGTH Players Local Coop Madness! (Or use Parsec to get 8 people online)
-1vs1 online;
-Legit aerial combos;
-ROOFS!!!!!!
AND THE ARCADE BOSS IS FREAKING CYBORG TAO PAI PAI!!!

Game play is surprisingly smooth. If you like platform fighters, you should give it a try. This game has a lot of potential.

Very fun and addictive. Wish there were more characters in the roster.

A very fast-paced Smash Bros. styled fighting game with tons of air mobility and the possibility of some disgusting combos.
The general gameplay is great and pulling off combos or a prediction feels amazing, so on that alone I highly recommend it.
That's...also pretty much everything, don't expect more from the game than the absolute core. The roster isn't huge but does the job with varied characters, similar with the stages.
What should be mentioned is that there are bugs and a decent amount of them. They aren't particularly bad in most cases, but be prepared to give up a free hit because you can't move here and there. I had to surrender in Arcade because my opponent got stuck far up in the air once.
Overall I recommend it if you have the money and is interested in games like Smash Bros., Rivals of Aether or Brawlhalla.

Excellent game with very unique mechanics that set it apart from the rest of the platform fighters out there. Smooth, crisp sprite work and momentum-focused combat that makes everything feel satisfying.
If I had to pick between all the platform fighters out there, Roof Rage would be a very close contender for #1.
+ The mix of HP and knockback based on remaining life is a very nice touch.
+ Combos feel consistent and effective, while still allowing proper DI mixups to escape them.
+ Momentum being a core element in EVERY attack in the game makes every attack and movement satisfying. All moves serve multiple purposes- ranging from spacing, movement, recovery and combo tool.
+ The fact that Heavy characters aren't slow and tank-like is extremely appreciated (as we all know slow characters in platform fighters are almost always weaker than all the others).
+ Every character has combos. Good combos. Not a single 'unfun' character to play.
+ Every character is genuinely unique, both fundamentally and in their gimmicks.
+ Roof tiles are a blessing, allowing every character to possess an effective projectile (god bless tile-spiking).
+ Both aerial and grounded combat feel meaningful.
+ Single-use aerials make stalling in the air impossible while also giving a lot of strategy to your recoveries. Don't listen to anyone who thinks this game is all aerials, as it is extremely punishing to expend them all- leaving you with no way to mix up your landing.
+ Air-dashing/dodging feels freaking incredible. Moving in general feels incredible.
+ Inputs are responsive and snappy.
+ Unlike other platform fighters, the game is almost entirely made of 'tilt' type attacks (a huge number of them) rather than focusing on a mix of tilts and specials. This allows for much more dynamic combat with many options at any given moment. I love the inclusion of diagonal attacks.
+ Directional blocking, cross-ups, and grabs all make an appearance, no silly full-shield that covers everything.
+ Catching projectiles can be both funny and satisfying.
Some bugs here and there, such as characters getting stuck (not too often) or the fact that the game can't actually support 8 controllers- just 4 players and 4 computers. We've tried many times to get more than 4 working, and we know it should work as games like Laser League and Super Bomberman R don't have this issue- perhaps something wrong with Xinput vs Dinput as Laser League didn't support 8 until we switched the input type.
I think the only negative input I can really provide here is that I wish more stages felt "competitively viable"? Some of the stages just feel very unpleasant for a serious 1v1 environment.
+/- Our favourites are The Jungle, Dragon Market, and Last Battle. The other stages are all somewhat questionable, competitively speaking.
+/- While fun, being inside of buildings often feel more annoying than it is exciting, even though it feels like it should be. Needs a cut-out view when players are inside a building.
- We really wish Dojo was a more competitive stage, but the weird vacuum effect near the ledges is kind of unpleasant, and the inability to wallclimb the base of the stage makes it hard to accept.
- You really shouldn't be able to drop through the side platforms on Bell's Door, and generally Bell's Door feels too small.
- The Ring and Moonlight Temple making roof tile pickups unavailable heavily affects character viability.
- Myanmar and Izakaya both have unpleasant placement of solid platforms that cannot be jumped through. Otherwise, they would be perfectly fine stages to play on.
- City Peak needs a wall to climb on the bottom, recovering as certain characters is just miserable.
- Halong Bay feels like it needs a rework entirely, I love the aesthetic but the stage is rough to play on.
Most of the issues are things that I feel like could be fixed, and mostly deal with specific stage designs that could be fixed/altered without breaking their identity (such as City Peak, which is meant to support Punk's baseball skills but just needs a wall base to climb).
An honestly, none of these are really things that take away from the game as a whole since there's still plenty there. Feels amazing to play, characters are fun, mechanics that stand out from the rest of the platform fighters out there. It's a little (a lot, actually) shocking how under-appreciated this game is. It deserves its own little scene.