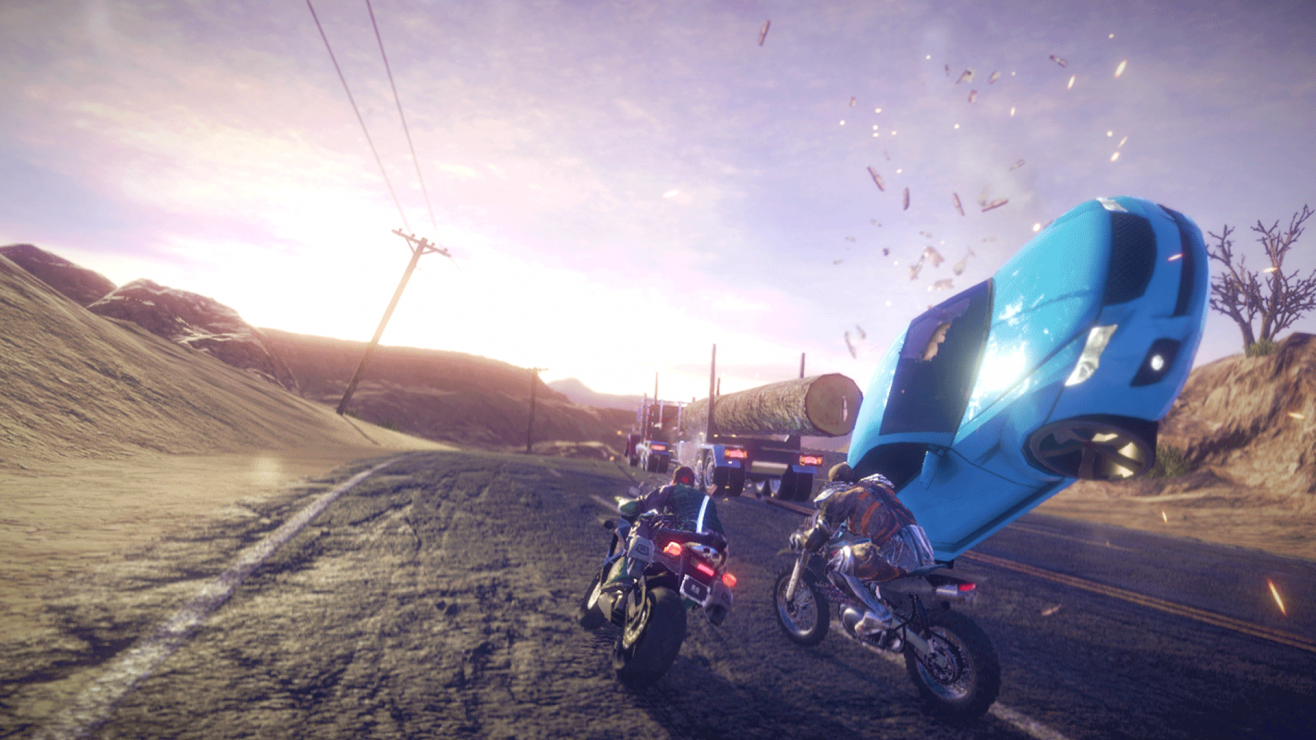 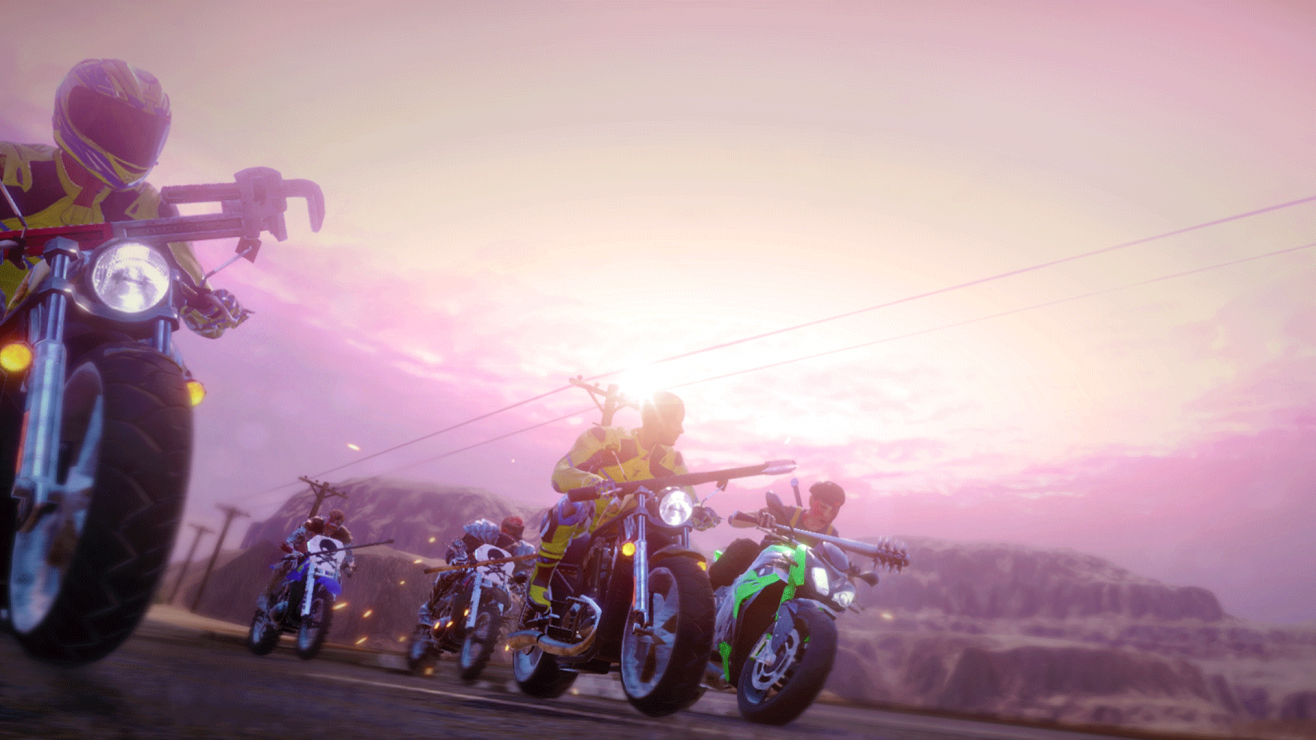 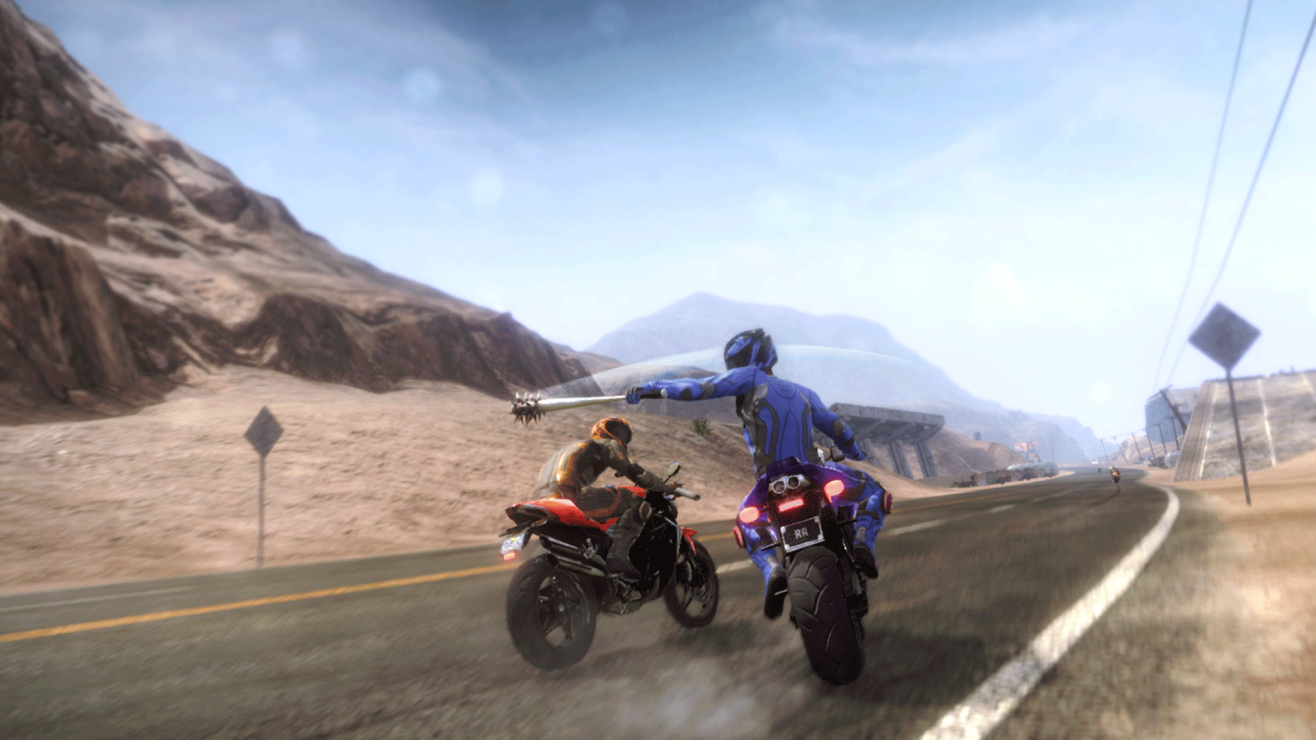 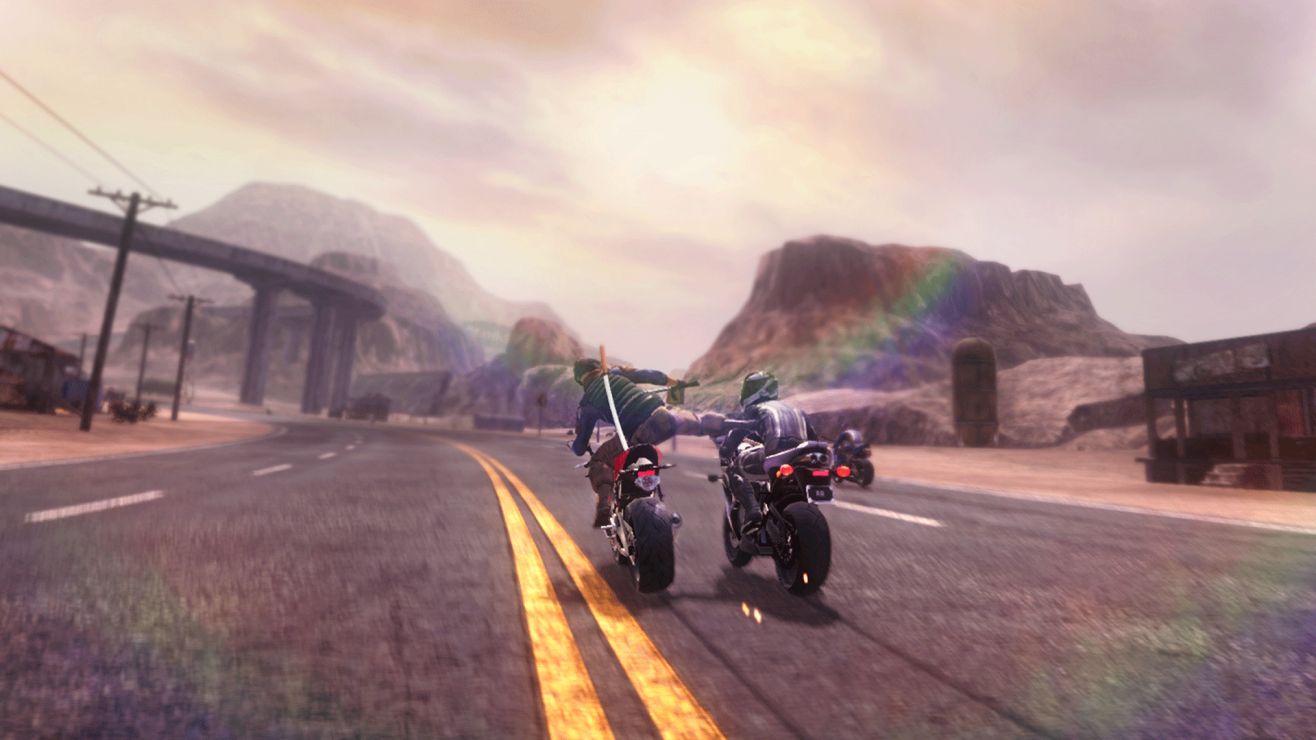 action arcade bikes indie moto multiplayer racing rogue-like sports
In the fiery remnants of a once vibrant world, gangs battle for dominance across wartorn highways. When a motorcycle assassin takes out the boss of the richest weapons cartel, the cartel offers a bounty of wealth beyond imagination for the assassin’s head. Now every thug, warrior, and bounty hunter with a bike and blade is out to catch the assassin and win the bounty, including you. The race is on. To succeed, you’ll have to fight your way across the country, through both friendly and rival gang territory, with whatever weapons you can get your hands on: swords, shotguns, baseball bats, sledge hammers, pipe bombs, and so much more. You’ll need to use what you earn and learn along the way to upgrade yourself, your ride, and your weapons. The path to glory and riches is a long one paved in blood and pain, but luckily you’ve got a fast bike.
Share Share Share
Promote for 50G

It reminds me of my childhood game road rash, so i enjoyed this game a lot. But biggest drawback of this game is that it have no save game option so you have to complete this game in one sitting or if you have windows 10 then to enable hybrid sleep and just put your pc on sleep after minimising the game. This way you can beat the game if you have not enough time.

Road Rash Meets Mortal Kombat. The fighting mechanics are way deeper than the racing ones, so if you're looking for a game with deep racing mechanics, look elsewhere. On the other hand, if you're searching for a new fighting game and think the racing component is cool, then this should be right up your alley.
I'm an old school gamer and love Road Rash to death. Road Redemption does look like Road Rash but it doesn't play like Road Rash. It is a great game in its own right though.

It's pretty fun. Controls are good but there is a lot of grinding to do before you're capable of dealing with the first boss.
No-one is playing online unfortunately.

Road Redemption is an amazing Rogue Lite Combat Racing game where you can use weapons to take out your enemies, survive the crazy tracks and reach the end alone or locally with up to 4 players.
The game is a spiritual successor to the Road Rash series, It improved on the formula by making it a Rogue Lite, Adding guns and random generated objectives. The whole game is not so much focussed on racing, Some objectives require you to finish at least 3rd, or finish before the timer is run out, But many rounds require you to take out a number of people or just survive.
You can play the entire campaign with up to 4 players locally, Here you have to work together to complete the objectives, Everyone wins as long as 1 person completes the objective. There is also an Online mode, here you can play all the different tracks online against other Steam Users Cross Platform. You can not play the campaign over the internet, So Online is Versus only.
In the Campaign you need to gain Cash and XP to upgrade your character. Cash can be used in the current run, You upgrade your weapons, buy some extra health or make more Cash drop, there are tons of options to spend your cash. XP you can use to make permanent upgrades to the entire game, Like new Bikes, New Characters, Extra damage, More Cash drops, you name it. If you die or complete the run you get the chance to spend your XP, Everything you don't spend will be lost.
The game takes you from freeways to skyscrapers, to Rainbow Road. No Road is too crazy for this game. along the track you will find several pickups, HP, Nitro, Jet Fuel, You can also gain this by killing certain bikers. HP and Nitro speak for itself, But Jet Fuel can be used to boost Vertically, You can "jump mid air" sort to say.
There are a bunch of weapons, You have long range weapons, short range weapons, Swords, Guns, Explosives. which all can be upgraded in several ways. There are machine guns, shotguns, pistols, but nothing beats just kicking your enemies off a bridge. Each weapons has their strong point, Swords work good for people without helmets, A Baseball bat works better on people with helmets, Ammo capacity is very limited so use your bullets and explosives wisely.
The controls take some time getting used to, Every button on your controller will do something, you make sharper turns by holding a button, There are 4 different attack buttons, And Boost is double tapping accelleration. It maybe is not the most ideal, But I can not see how it could have been done different with a controller.
There are a bunch of characters, and a bunch of different bikes, They all have unique stats, Bikes say something about speed, accelleration, etc. The Drivers change HP, Damage, and some even have extreme handicaps like making the game harder, no skill tree or the inability to heal. There even are some fun suprises when it comes to the roster, Like Shovel Knight for example.
The game looks great, It has a nice sound track, I also love that the Dev put his phone number on the you are dead screen. It states that if you don't like the game, let the dev know, with a US phone number. I think the game is great, It is not really focussed on Racing, So people who expect a race game might be a bit dissapointed, Racing is still there, But only like 50% of the time it is an actual race in some form or another. The other half are combat focussed objectives, which are pretty cool too in my opinion.
Overall there are Not many games like this, the 4 player split screen makes it extremely unique. Online is still being played and I had absolutely no problem finding players. I have to give the game a solid 9, It is a whole lot of fun and certainly a must have. I think everyone will be able to enjoy this game.
Follow my Curator Page:
Steam Cloud Save
Not working, Backup manually ~/Road Redemption/
Controller Support
Yes, Xbox One Bluetooth Working
Achievements
Just about right
FPS on Ultra
Around 150fps
Launch Command
gamemoderun %command%
Issues
None
OS
Arch Linux
Kernel
5.3.7
DE
Gnome 3.34.1
CPU
Intel I7-6800K @ 4.20Ghz
GPU
Nvidia Geforce GTX 1080 (Nvidia 435.21 Drivers)

It reminds me of my childhood game road rash, so i enjoyed this game a lot. But biggest drawback of this game is that it have no save game option so you have to complete this game in one sitting or if you have windows 10 then to enable hybrid sleep and just put your pc on sleep after minimising the game. This way you can beat the game if you have not enough time.

The reason people are unhappy with this game and leaving negative reviews is the same reason a lot of people are unhappy with their lives...they keep comparing.
This is NOT Road Rash:
Sure it pays tribute and in a way can be considered a spiritual successor, and is not without its flaws. But understand it was not created to be another Road Rash, and stop treating it as such.
That said this is the first racing game I've enjoyed playing with Keyb + Mouse besides GTA IV. It works and with a thumb button mouse you can focus on steering with your left hand. Hand braking will take some getting used to but once you get past that, you're on your way.
I would like the developers to improve the object collision and physics. You can so easily fly off the track into oblivion, or get stuck on scenery, or behind cars. Until then my advice is stay on the roads as much as possible.
I really hope you enjoy playing, see you online.