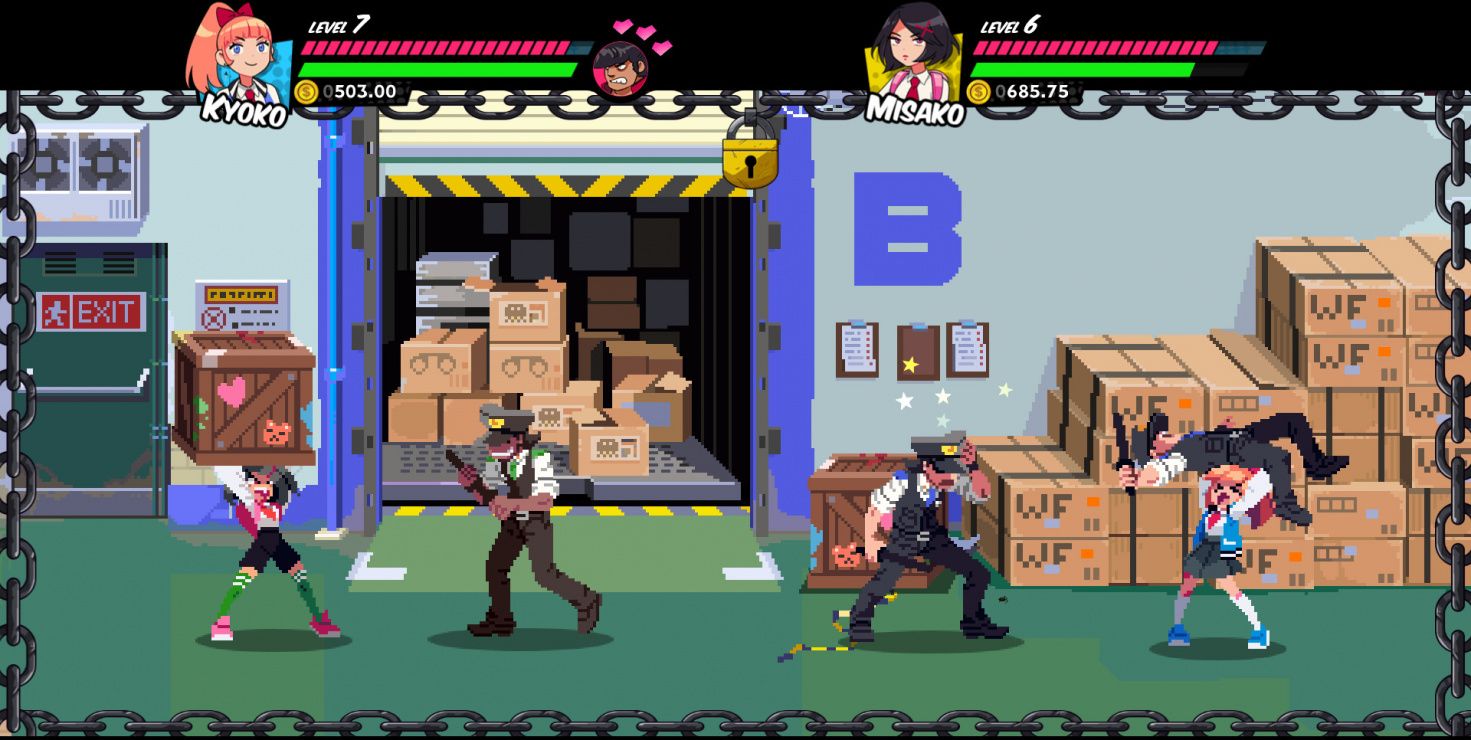 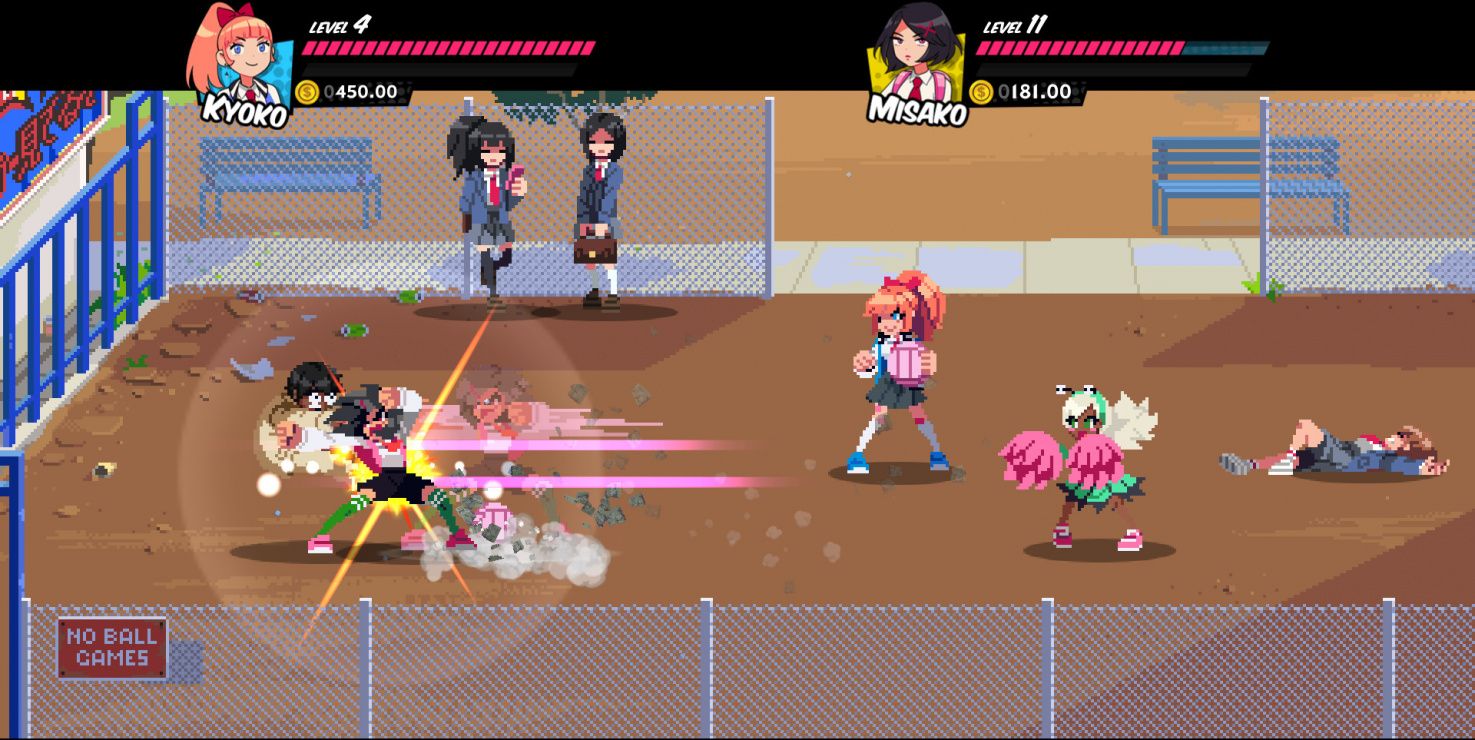 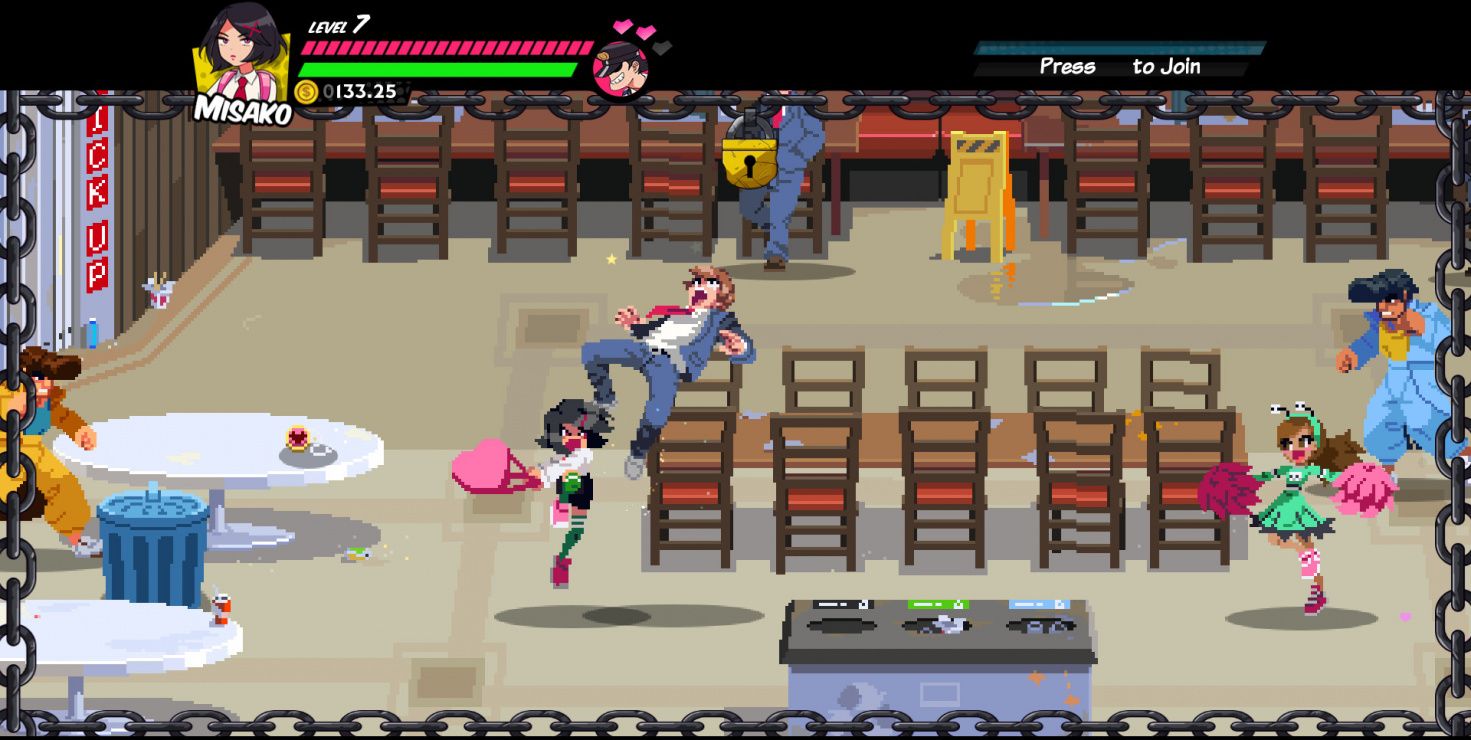 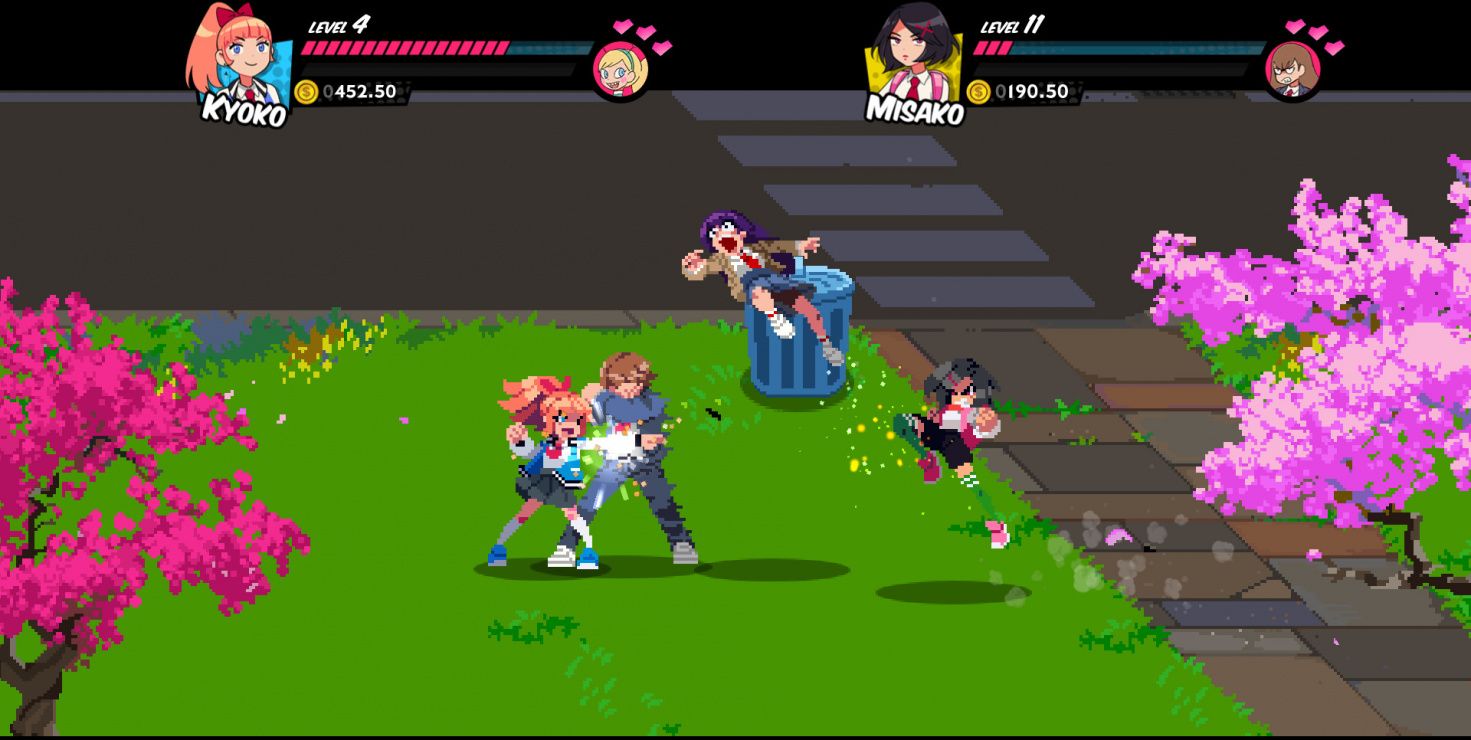 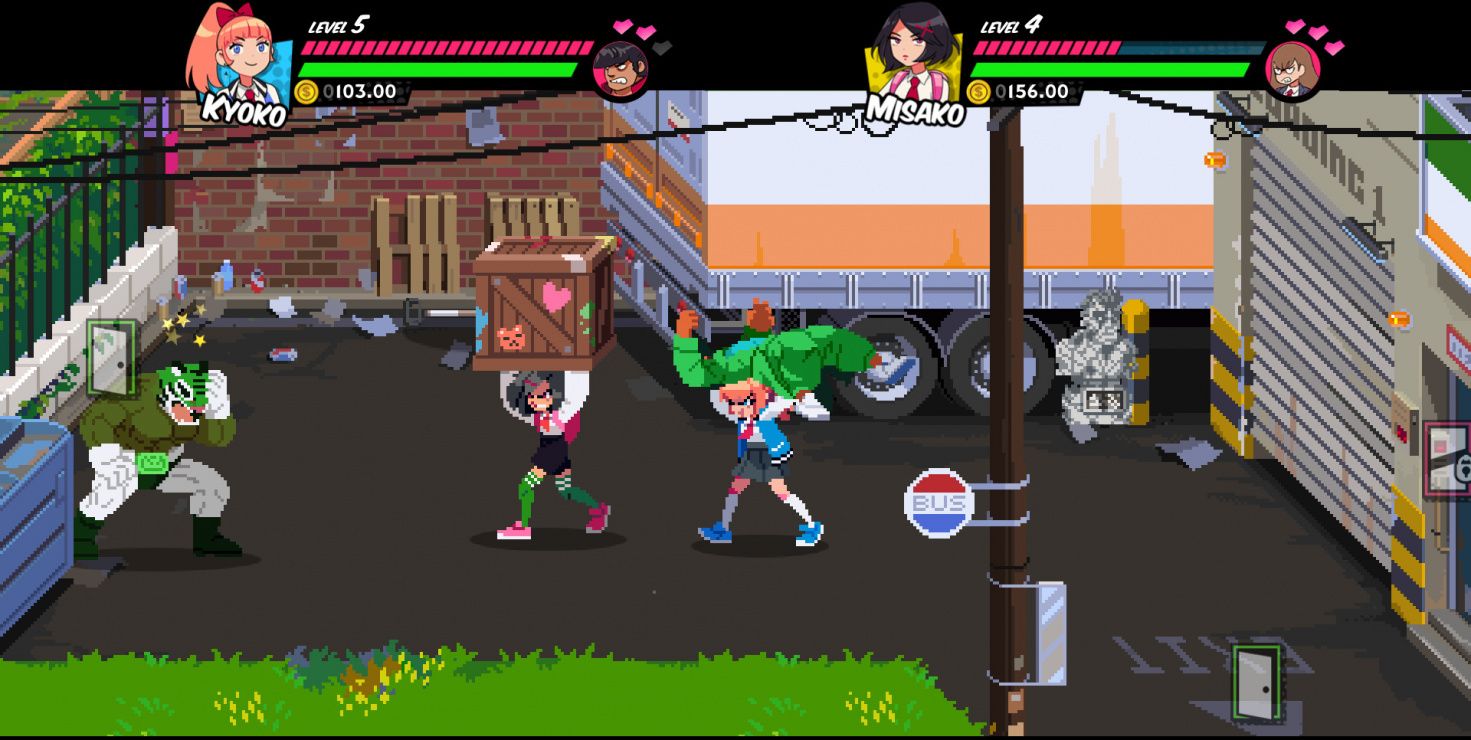 2d action anime co-op female music protagonist retro
There's trouble once again on the mean streets of River City, but this time the boys are in over their heads! In this all-new entry in the legendary beat-'em-up series, hot-blooded heroes Kuni and Riki have been captured, leaving it to their hard-hitting girlfriends, Kyoko and Misako, to serve up some payback. As you punch and kick your way across town - either solo or with a friend in local co-op - you'll gain new skills, chow down on power-ups, wield an assortment of weapons, and unleash an arsenal of combos, throws, and special attacks that will leave the bad guys crying for mama - all in outrageous 16-bit style! The awesome action is punctuated by manga story panels, anime cutscenes, and an epic synth-pop soundtrack. It’s an old-school rumble for a new generation! Key Features: • Wild beat-'em-up action for one or two players! • Glorious pixel-art graphics plus anime and manga cutscenes! • Fantastic soundtrack featuring Chipzel, Christina Vee, and NateWantsToBattle! • Six large city regions to fight through, complete with shops and side quests! • Loads of weapons, items, and abilities to power-up your heroines! • Guest appearances by classic River City characters!
Share Share Share
Promote for 50G

It's like Scott Pilgrim, but you can actually buy it.

PROS:
- Insane amount of fun with a friend
- satisfying moves and combos
- Cute anime art style with animated cut scenes
- Side-scrolling beat em up with RPG elements such as stat boosts and a leveling system
- entertaining story with likeable characters
- amazing soundtrack
- Pretty good variety with fighting areas, each place has their own identity and feel
- Some moves are incredibly funny to pull off
- Moderate-high replayability (depending on the person) with an 7-8 hour story with collectables and hidden ending with multiple playable characters
DECENT:
- money used to buy moves and accessories is a little bit of a grind but money from bosses are massive so it's kind of a trade off from each other
- Some bosses are fun! while some are decent. some are boring. Not all bosses are created the same
CONS:
- low mob variety
- fighting can be repetitive
- NO ONLINE PLAY for a co op game forcing you to use remote share which isn't BAD but the lack of online is just weird for a game like this
- Game is NOT for solo runs, will get boring really fast for you unless you were already invested into the game
- Without saying spoilers, playing as certain characters is a little anticlimactic. Thought it would change the story but it was basically the same with a new playable character and new moves.
- some really annoying bugs (my friend had lost her entire move set from the dojo after her death in a boss fight)
OVERALL:
I love this game to death, buying it with a friend and playing through it was a really fun time. I bought the game thinking there was online multiplayer but that's my bad for not looking at the games tags. Getting remote play to work was annoying at first but when it started working it was fun. Other than the points i brought up above, This is a really well made game. There is a lot to improve on but coming into this game not really knowing what to expect and keeping an open mind was really beneficial to my friend and I's experiences. I would highly recommend picking this game up at the full price with a friend and have some fun with cute anime girls beating everyone up to save their boyfriends.

The soundtrack alone is well worth the price. I couldn't find even a single track that is not satisfying.
The visuals are also nice and stylish, personally I'm no big fan of pixel graphics, I still find the visuals amazing.
Story is a bit short, but all characters are charming in their own ways, dialogues are fun to read as well.
The only thing that bothers me while playing is the controls, interactions and light attacks are assigned to the same button, meanwhile the two triggers do the exact same things as the two shoulder buttons. For many times when I was trying to punch someone in the face, I ended up picking up useless weapons from ground.
Nevertheless, it's a great game, totally worth your money and time.

What I like
+Gameplay
+Art
+Music
+Characters
+Area design
What I feel mixed on
=Some of the hidden item placement got on my nerves at times.
=Some moves don't combo well together, though this can depend on the character. (I'm fine with this for the most part, but it can feel a bit odd at 1st if you're more use to combos in Beat 'em ups.)
What I don't like
-The Light Attack and Interact buttons being the same can make for unwanted exits.