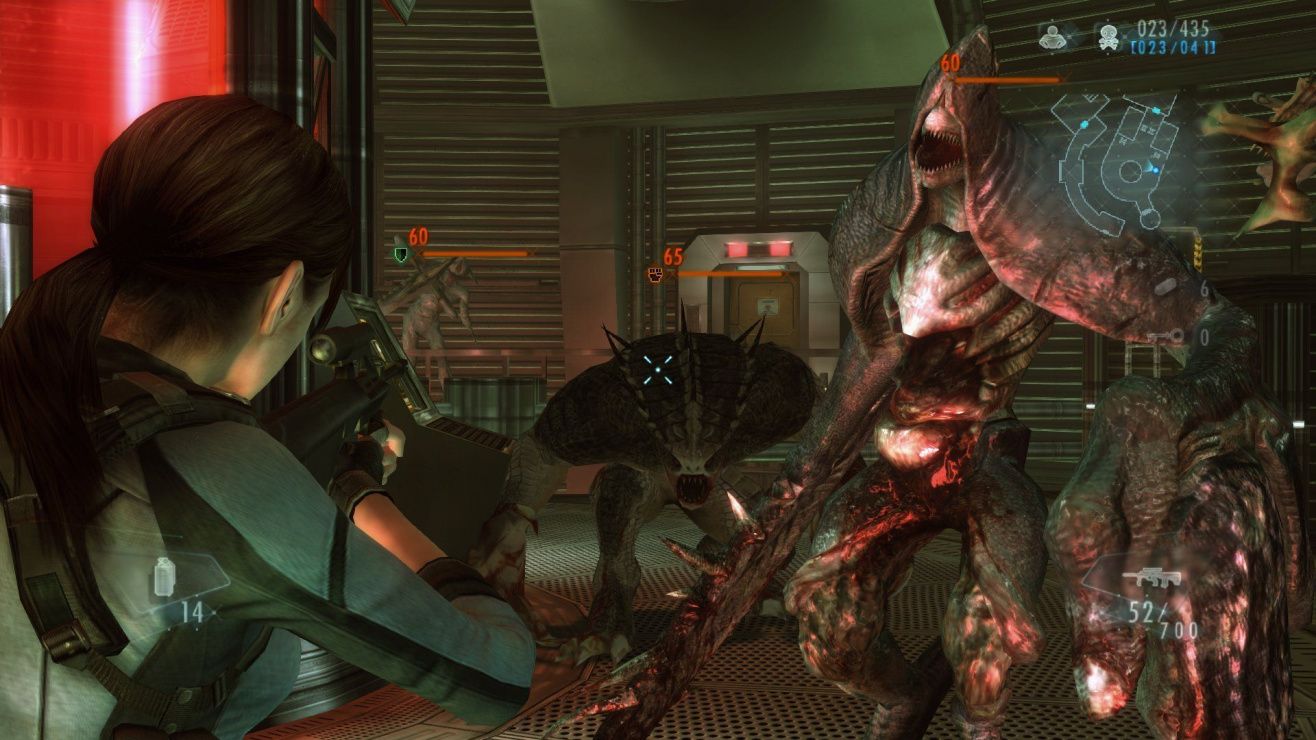 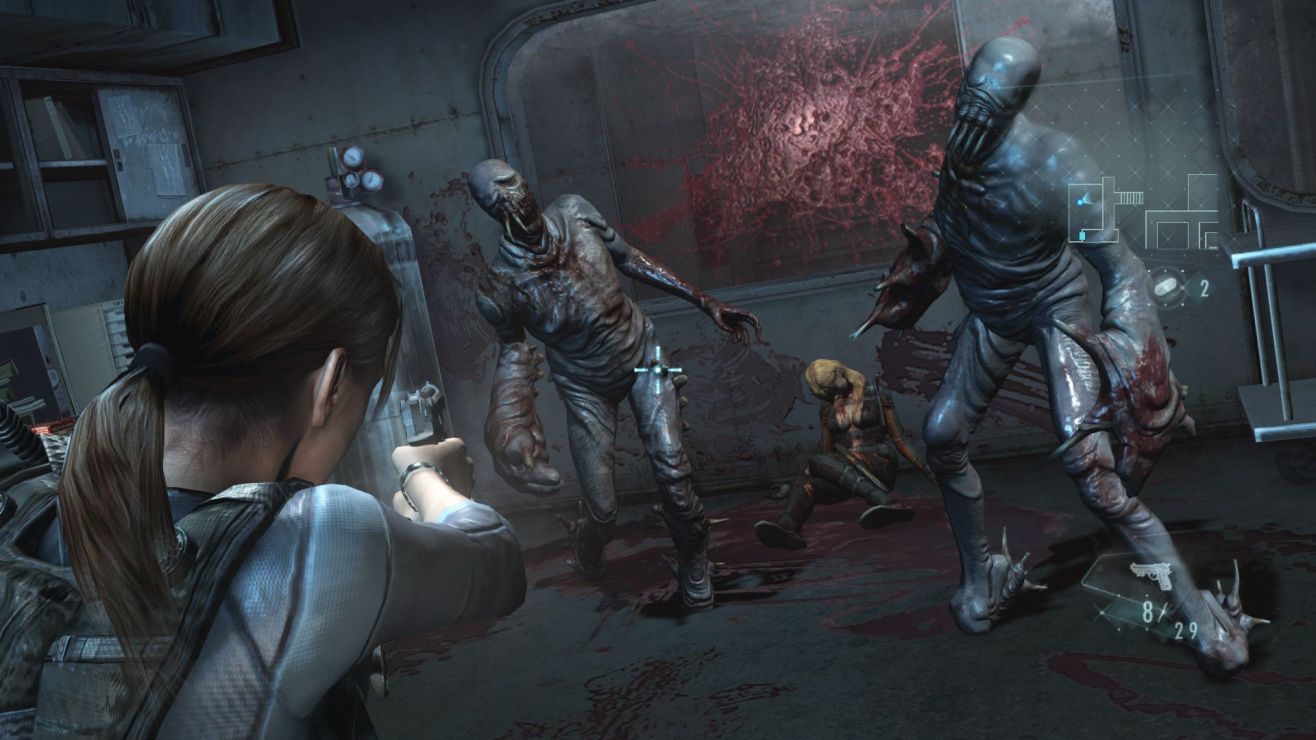 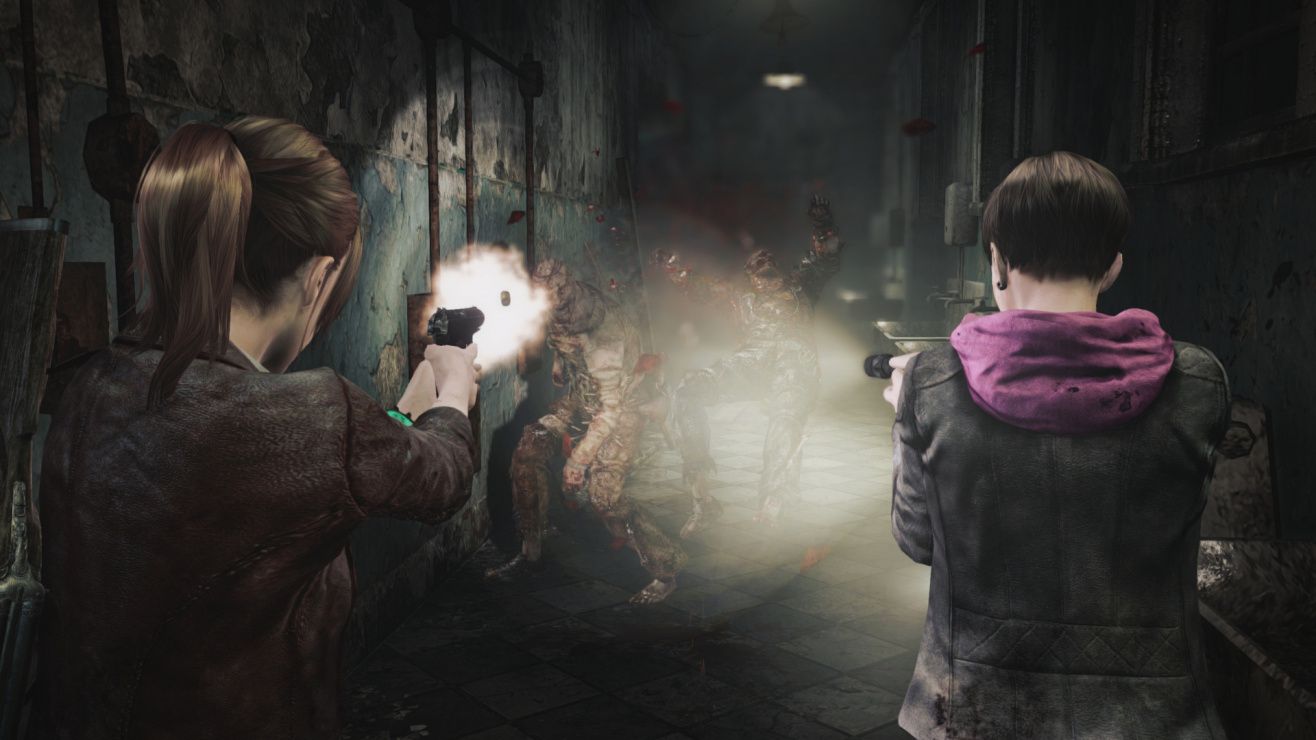 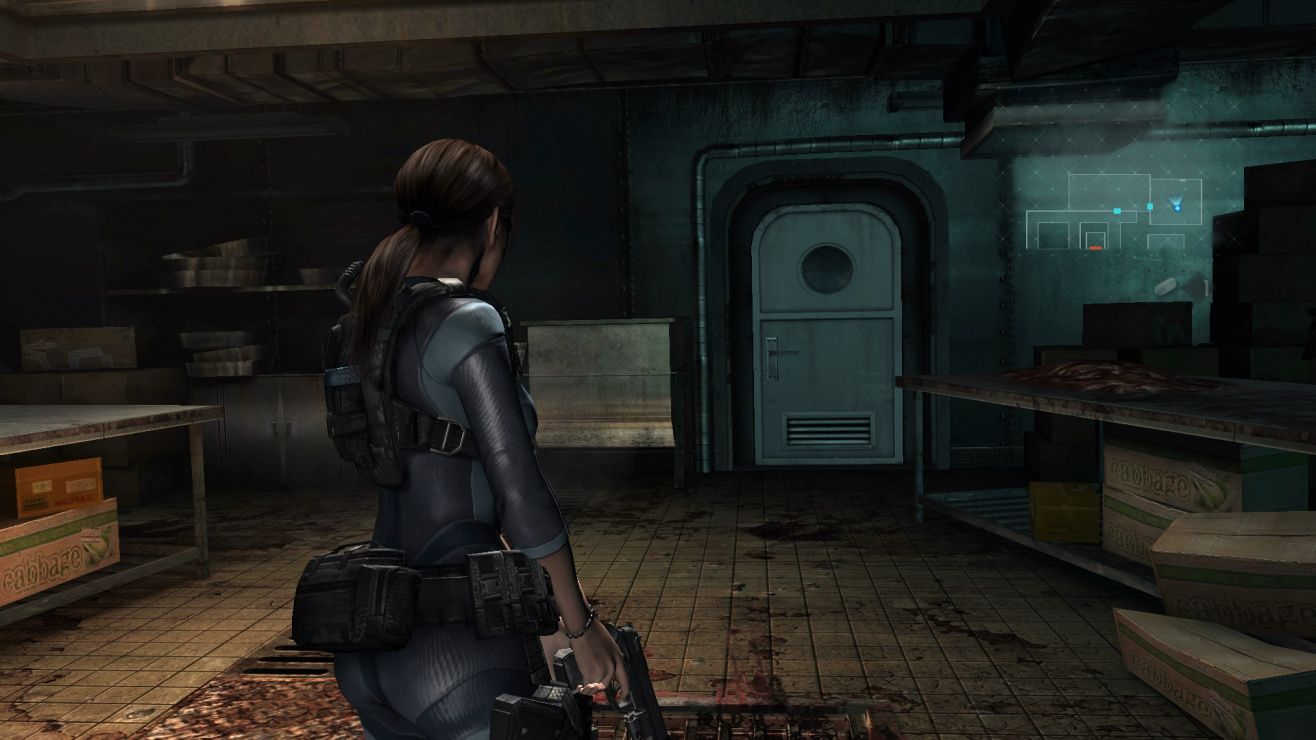 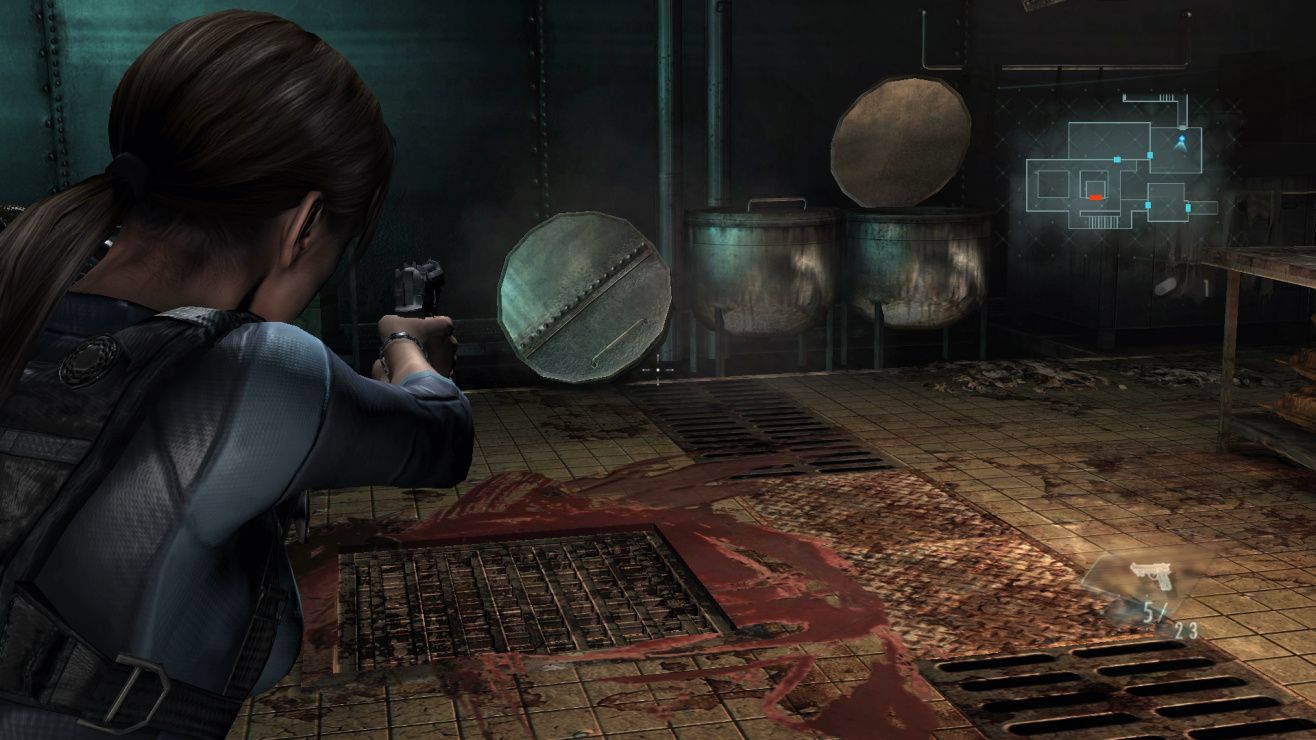 PC Steam Console Playstation action Xbox Nintendo singleplayer co-op survival horror zombies
Unveil the truth behind horror The critically acclaimed survival horror title takes players back to the events that took place between Resident Evil 4 and Resident Evil 5, revealing the truth about the T-Abyss virus. Resident Evil Revelations features series favorites Jill Valentine and Chris Redfield, plus their respective BSAA partners - Parker Luciani and Jessica Sherawat. The action begins on board a supposedly abandoned cruise ship, the ‘Queen Zenobia’, where horrors lurk around every corner, before players head for the mainland and the devastated city of Terragrigia. With limited ammo and weapons available, the race is on to survive the horror of Resident Evil Revelations. Enhance your gameplay experience even further with additional motion controls that let you aim and wield your weapons with greater accuracy on the Nintendo Switch.
Share Share Share
Promote for 50G

Thanks for reading (if you did) and please let me know if you found this review helpful!
Cheers!
-Yorith

An underrated RE game
In a time when RE games were shifting away from its original concept and getting worse with each release, this game was an unexpected return to the original survival horror the series is known for. The game was originally released on the 3DS and because of that it’s pretty straight forward, no side-quests, no multiple endings, it’s much simpler and easier than the other titles I’ve played, not necessarily a bad trait.
The great thing about this one is that it combines elements from the original horror focused games (1,2,3) and the action focused ones (4,5,6). In one episode you’ll be in a room without weapons with a monster chasing you and in another one you’ll be in a turret section shooting everything in sight. It mix things up pretty well, they don’t feel forced and the game maintains its focus. Classic Resident Evil mechanics are still in this game, inventory management, storage box, the ability to avoid enemies and the puzzles.
80% of the story happens aboard a cruise ship and that’s where you’ll experience the survival horror aspect of this game, the ship is filled to the brim with monsters, not the run off the mil zombies but new creatures known as “Ooze”, basically the same thing gameplay-wise, the difference is that they don’t really look human and have some maritime characteristics because of the virus’ origins . The creatures in this game are very creepy and unsettling, specially the bosses. The ship looks run down and depressing, it will make you uncomfortable, its corridors are dark and narrow, similar to the mansion from the first game, giving you that claustrophobic feeling and setting the “survival horror” atmosphere. The place itself is huge, you get a decent variety of environments, from the ship’s machine room to its luxurious hall, there’s even an underwater segment. The way you survive and fight also change with the environments, you won’t get strong weapons till later in the game so this part is mostly the classic: “Should I kill or avoid them?”. The story bits that happen out of the ship are usually more action oriented, having to kill most of the enemies you’ll have better weapons and more ammo.
The story is divided in episodes, it goes back and forth among the characters and timelines, shifting perspective and tone. Almost everything that take place on the ship will have you play as Jill Valentine, some episodes will have you play as Chris, Keith or Parker, those are the more action focused ones. Set before the events of RE 5, It’s the same great conspiracy with multiple twists and intrigues plot we all love, it works like a prologue, explaining the BSAA and what Chris and Jill were up to. The dialogue still has some cheesiness to it but that’s part of Resident Evil.
There are a lot of main characters in this game, and I mean A LOT, classic and new ones, sometimes you’ll get lost by so many names. Most of the levels you’ll have a partner with you and you’ll get to see their relationships play out, they’re all compelling in a way, even the fan hated Jessica. I really enjoyed Jill and Parker chemistry.
The game features a Raid mode, you play it solo or with a friend, you choose any character from the game to play as, even some bonus ones if you have them unlocked. It’s an action oriented mode where you’ll have to complete levels from the main story as quickly as possible, the only mission here is to kill as many enemies as you can and get to the objetive. There’s a level system and a shop that you can use to unlock stronger weapons and completing objectives unlock new characters. While I’m not a big fan of these action modes I had fun with Raid, mainly because of its co-op and the ability to play with characters you like , it gives the game replay value.
The only real issue I had with this game was the camera and the fov, they’re bad, had to install another program to fix them.
This game is often forgotten whenever someone brings up the RE series, while not a masterpiece it’s a gem and if you enjoy the series you should definitely play it.

Resident Evil Revelations takes players back to the events that took place between Resident Evil® 4 and Resident Evil® 5, revealing the truth about the T-Abyss virus. Resident Evil Revelations features series favorites Jill Valentine and Chris Redfield, plus their respective BSAA partners - Parker Luciani and Jessica Sherawat. The action begins on board a supposedly abandoned cruise ship, the ‘Queen Zenobia’, where horrors lurk around every corner, before players head for the mainland and the devastated city of Terragrigia. With limited ammo and weapons available, the race is on to survive the horror of Resident Evil Revelations.
After completing the Resident Evil Revelations, I can say that this is one of the best RE in the series. Most importantly Classic survival horror gameplay returns with various enemy types with great storyline. Revelations series basically an episode wise story telling mechanism, completely new and different taste in the Resident Evil Series. Many plot twists make you stick on the game for finding out what is going on. Game takes place on a huge ship "Queen Zenobia" with creepy environment with various enemy types and boss fights. Gameplay is solid. Various weapons with organized upgrade system. Optimization of this game is buttery smooth. Overall A great Resident Evil game after all. Raid Mode is more fun and you can play with your friends with extra challenges.
Pros:
1. Amazing Visual Details.
2. Classic Survival Gameplay.
3. Satisfying Boss Battles.
4. Great Story-telling.
5. Various Weapons.
6. Great Co-op.
7. Great Optimization.
No Major Issues found. 10/10.

This is purely a review of the campaign, I'm a series vet and I've only played and beat this game once, having picked the highest(Infernal) difficulty.
Starting with the bad.
The beginning of the game had the least thought put into it, it's really unfun to play, tedious and unbalanced. The early chapter gunplay is dreadful since your guns can't be upgraded yet. The early enemies are bulletsponges, they don't respond to hits and their design is just a dull gray goop-man. Furthermore, early on you're forced to use a dodge system that's broken and unintuitive, pulling off 10 sequential parries in Dark Souls or 10 dodges in RE3 is easier that pulling off a single dodge here.
More over the game overall suffers from very poor communication, a lot of information simply isn't given to the player resulting in trial and error as well as frustration and backtracking.
Another thing is the dreadful voice acting, Jill, Chris, the main antagonist, and a few other characters all have the personality of a piece of cardboard, the voice actors were given no direction resulting in awful performances. Even when characters are about to die they're as stiff as a stone. Not to mention the boring and unengaging dialogue writen for said characters.
Lastly the game has one of the worst mechanics ever seen in Resident Evil history. 90% of items such as bullets and upgrades are invisible and can only be seen after being revealed by a tool called the "Genesis". Using it is mandatory, else you're gonna miss out on almost all the ammo and vital upgrades for your weapons. It all comes crashing down when you realize such a mechanic is pointless, the game wouldn't change at all if the items were visible from the start. And since the Genesis majorly slows you down you end up exploring each area once, and then again at snail's pace looking for items you "missed". I am not lying when I say my 14,5 hour playthrough could have easily been an 6-8 hour one if not for this stupid mechanic.
As for the good, while this one will be shorter, that doesn't mean the game lacks it.
From chapter 3 on wards, the game becomes really, really good and hell of a lot more fun. The game really starts to shine when it deviates from including fan service and starts immersing you in it's original content. The setting of the game(ship), the new characters, custom weapon parts mechanic, all original and full of personality. It's a shame the new cast gets benched so often so the series veteran characters can be put in the spotlight.
The game's gameplay loop also becomes more engaging when the game finally gives you some options. With the weapon upgrade system and the limited resources you have on your hand it's great fun strategizing and overcoming gravely difficult scenarios. Who would have thought giving players freedom of choice in how they want to survive would be fun?

While the early chapters made me want to quit and never touch the game again, I'm glad I forced myself to play through this game to find a shining gem that's crusted in rubbish.
It's not the best, but after working through it's kinks I had great fun with the game.