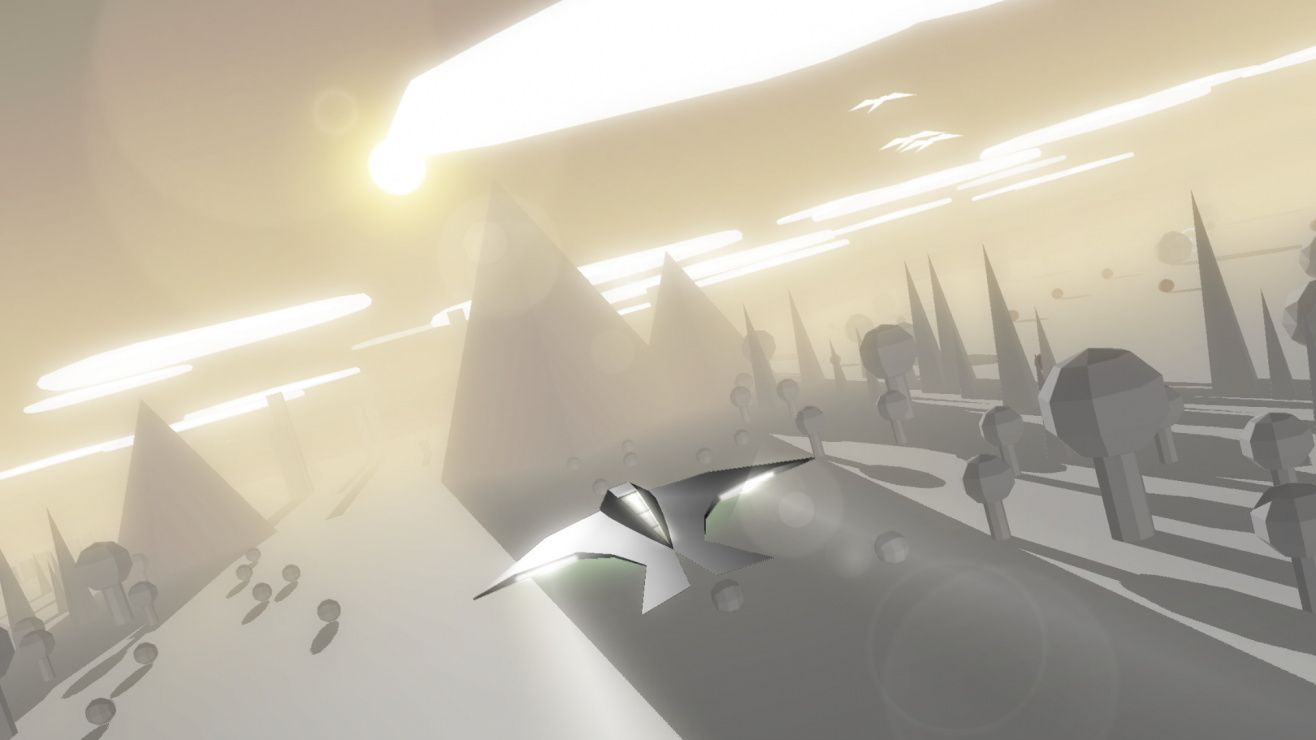 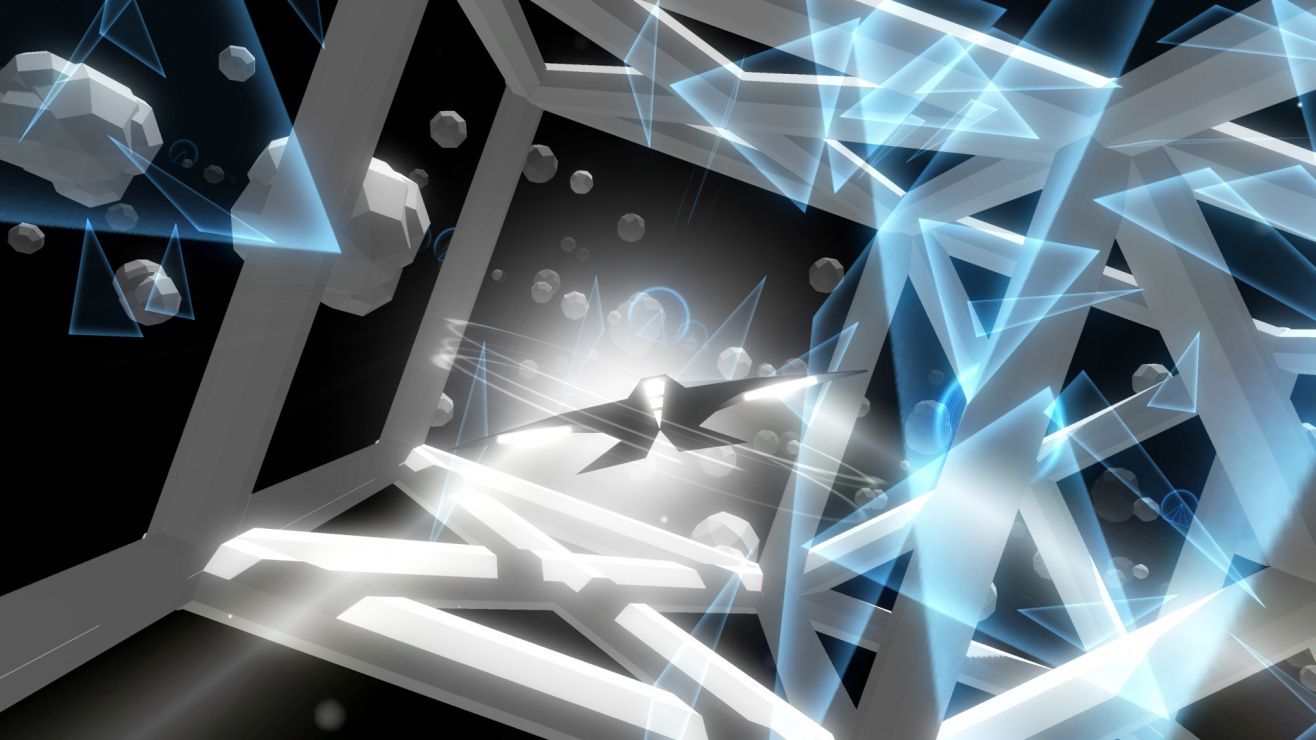 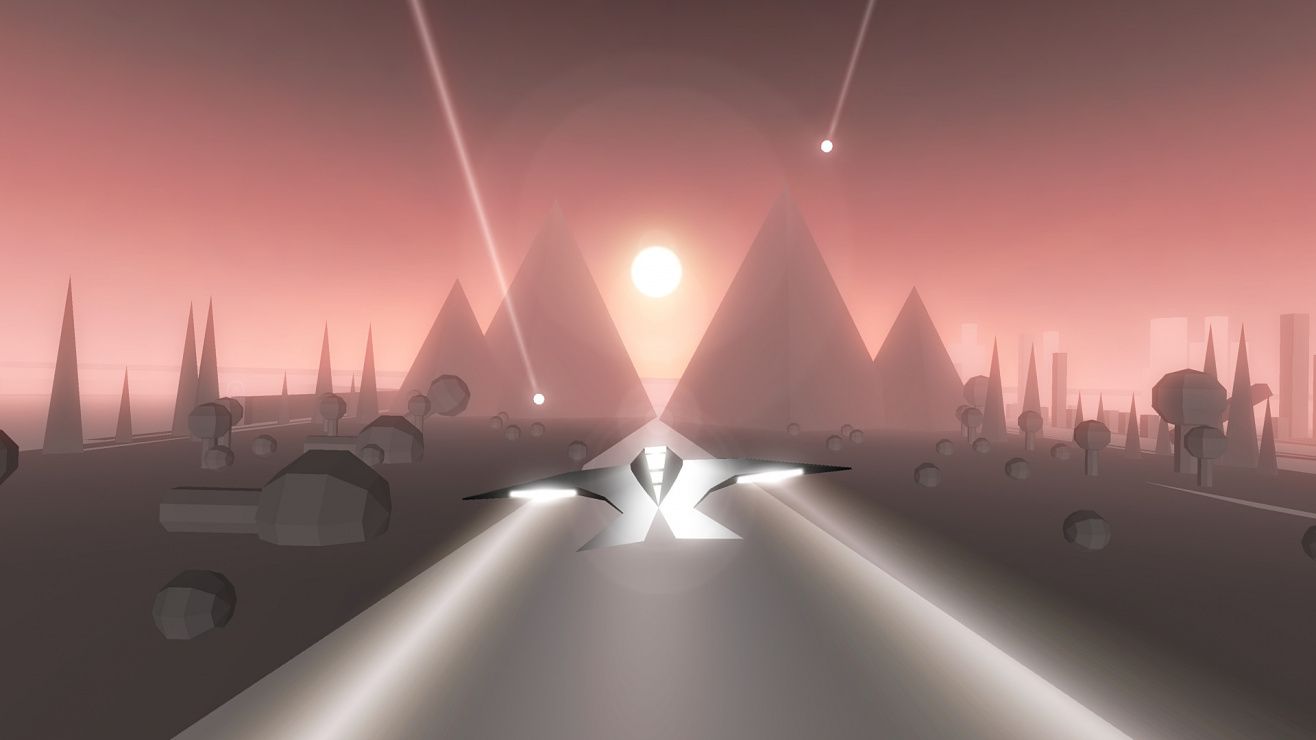 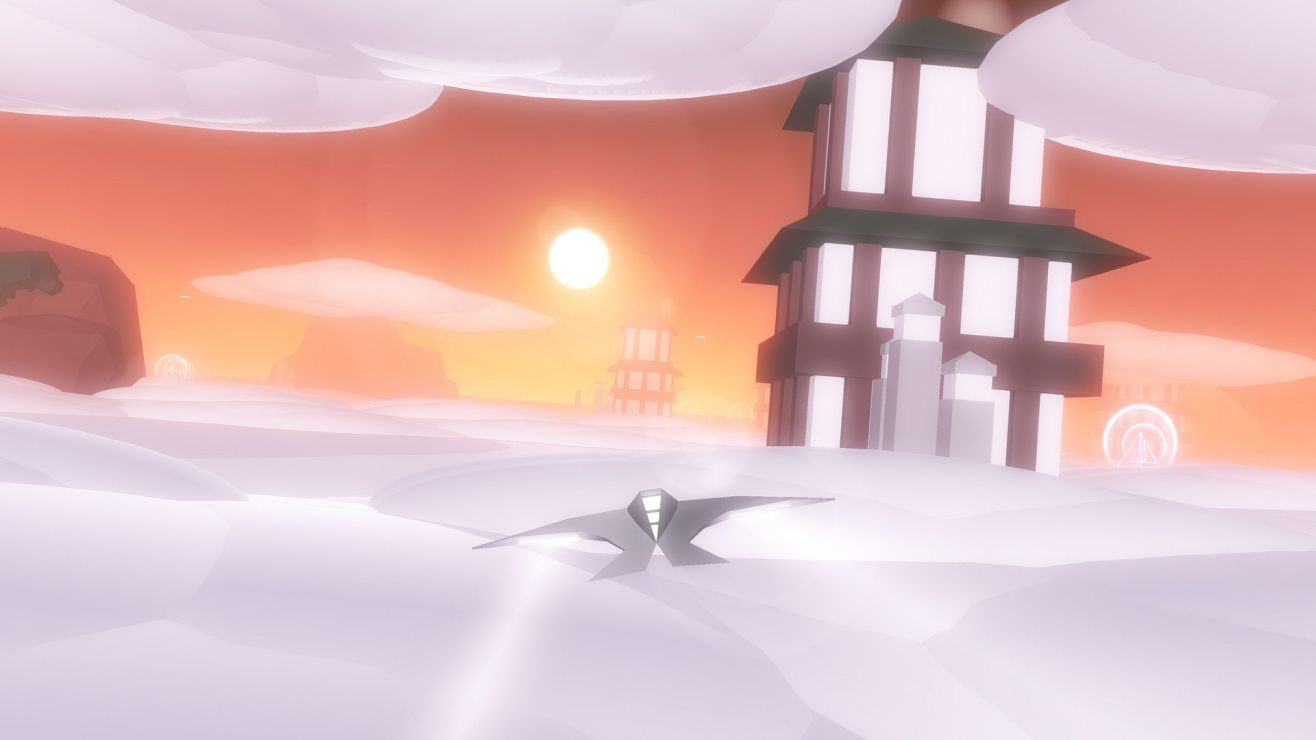 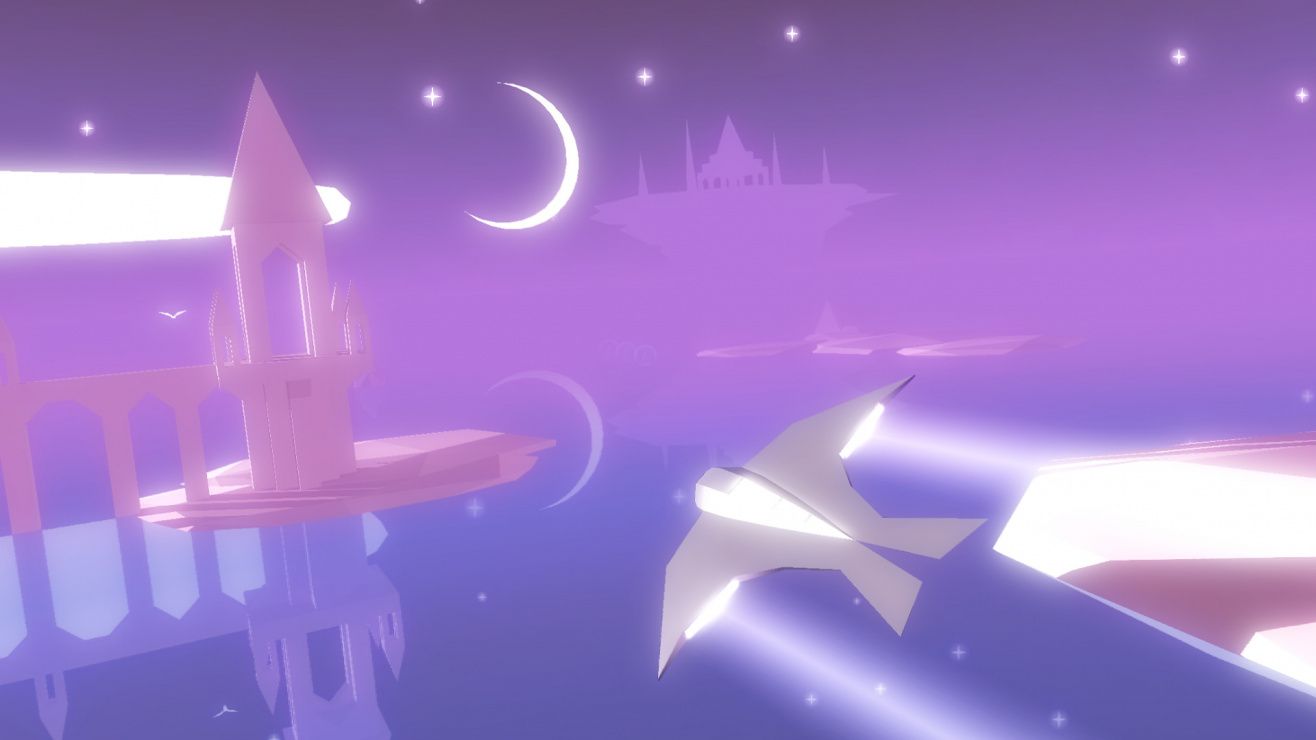 action arcade atmospheric casual flight indie minimalist racing sci-fi vr
You are a solar-powered craft. The sun is your death timer. Hurtle towards the sunset at breakneck speed in a futile race against time. Delay the inevitable by catching speed boosts which reverse the setting sun - if only for a moment. Race The Sun is inspired by arcade games of the past with a focus on high scores, short game sessions, and pure fun mingled with nerve-wracking tension. The rules are simple: don't crash, stay in the light, and don't slow down!
Share Share Share
Promote for 50G

Fun game overall. I don't really have much to say except for... this... on VR... IS AMAZING!!!!!
Seriously, one of the best VR experiences there is! Like, it works so surprisingly well on it! 0_0

Spoiler alert: you can never win the race against the sun. But it's still fun to try!

Fast-paced, pick-up and play arcade game with a few fun game modes, great for both twitch gameplay and relaxing. Main mode's course is randomly generated every 24 hours, keeping it relatively fresh and encouraging you to figure out optimum routes through each stage every play session.

Awesome little game. Nice to play when you just want something that you don't have to get *too* engaged in. Just jump in and give it a few runs to see how well you do on today's course.
I do wish that it had some tasks once you've reached level 25, though. Just something to work towards other than a better score.

Race The Sun is a such a pleasant queue game, especially considering the price you can get this at during sale periods.
I have many friends who I occasionally drag into playing less than popular multiplayer games (to put it mildly), and they always whine and moan about how long the queues are. And while I can understand their frustration with waiting, I've never had a problem with those queue times because of my beloved “queue games”. Yes, queue games, the fun little games which are easy to jump in and out of at a moment’s notice, and don’t require much long-standing rhythm to play well. Race The Sun is one of these in my eyes, and a pretty good one at that.
And before I start, while some people, maybe even the developers, may feel that to call a game a “queue game” is to relegate it to a lower tier of games, I’d argue that’s not so, especially not in the eyes of this reviewer. First, queue games form a necessary and often hard to fill space in gaming. Secondly, I think there are several critically acclaimed titles, such as The Binding of Isaac or Badland, which can fit this mold well and we all know how great those games are in the eyes of the general public. Beyond both of these things, “queue games” are great for a whole host of other situations where you want a quick burst of gaming, like waiting for a friend to pick you up, or when you’re on the toilet (in the case of mobile ones).
But I digress, what makes it a queue game worth getting? For me, above all else, is that it felt like Arcade action with some progression. Whereas most arcade games, like Slipstream for example, progress only as a result of player skill, allowing you to move to new heights and play new levels as your skill improves, Race The Sun takes a different, very satisfying, approach. It combines a mix of the daily quest mechanics that many games employ nowadays, but with a set number and order to them, and as you progress you unlock a pre-determined order or abilities and upgrades (and a few cosmetics). Ultimately, these allow you to push further in the game while also improving your skill. Early on the progression seems slow, and the levels are that interesting, but if you can hang around just a little bit you’ll see how much more exciting and difficult the levels can become. There is more to unlock once you reach max level, too, with a much different game mode that feels like a new kind of game entirely. The game could get a little boring before you get there, but once you do it feels great again.
The game itself is not so visually stunning, besides the Sunrise DLC which has a beautiful color palette, but the visuals are simplified so that the focus is on tight gameplay mechanics. The controls are incredibly simple, and they handle well. Despite needing to be quite precise at times in this game, I’ve never once felt that I died to loose controls. It’s always player error. The soundtrack is not amazing, but it fits the tone of the game well, especially when the levels shift and the gameplay intensifies or de-escalates.
On top of all of these facts is the super cool factor that Race The Sun has workshop support, and you can download a number of levels and designs to play for new challenges all the time. And even if you don’t like that, the levels change daily so that every time you come back there’s always new challenges and chances to beat your previous hi-scores!
Overall it’s fun arcade game with a nice sense of progression, which isn’t always there in this kind of game. It is easy to pick up and play in a couple minutes, and provides a nice challenge for you to work at improving. At $10usd you might not want to get this game, but considering it goes on sale around four times a year for $2usd or so, there’s no reason not to get this game! It’s a solid arcade-style queue game, but with some unique aspects like workshop support and daily level changes. You’ll be pleasantly surprised with this, I’m sure.
7.0/10

Game Review from 30 Minutes of Play
Reminding myself if I should revisit and if you should purchase.
ELEVATOR PITCH: Solo One Way F-Zero
LIKED: How the game gradually reveals itself to the player. The feeling of mastering a difficult path or seeing in big bold words the marker in surpassing a personal best. What's on the surface a low polygon endless runner has unexpected depth and community mod support.
DISLIKED: I wish sharp turns could be made. There is Zen DLC, but not a mode where one can pass through objects and simply enjoy without crash repercussions. Perhaps one is already designed from a community level.
===== Mood After 30mins =====
☐ Addicted
☑ Afternoon delight
☐ Grindfest
☐ Frustrated
===== Will I Revisit =====
☐ Yes, I aim to 100% complete
☐ Yes, but only beat the game
☑ Eventually. Until then, back to the pile
☐ No, on to other games
===== Price =====
☐ Full price worthy
☑ Discount
☐ Deep discount
☐ Pass
Disclaimer: I'm aware 30 minutes is not enough time to properly review any game. Historically, I'm a big completionist when it comes to gaming, but my backlog will just not die and adulting obligations continue to mount. I needed to find some sense of accomplishment with my backlog other than buying them at great discount. Dedicating at least 30 minutes of play per game will be my arbitrary sense of achievement. It may not justify my gaming spending habits, but I'll suffer less buyer's remorse. Who knows, in 30 minutes I might discover a great game I want to revisit and something you want to purchase. GGs!