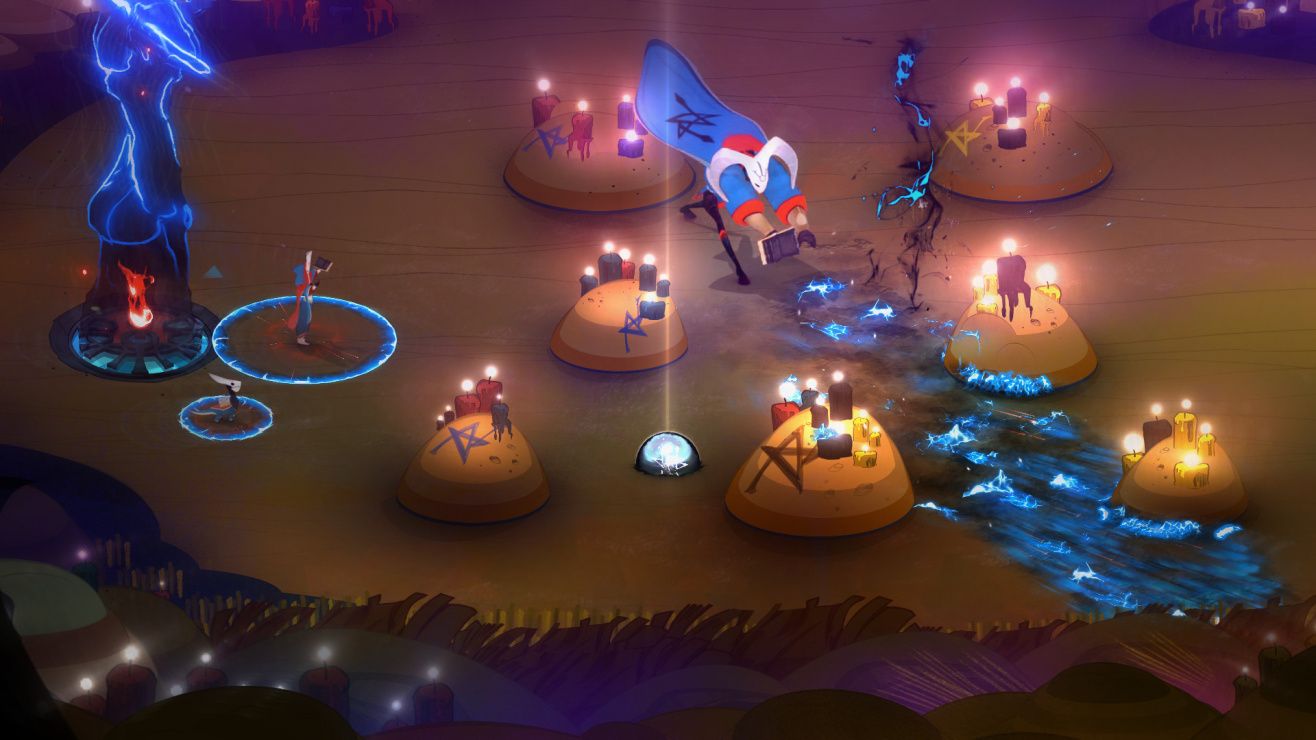 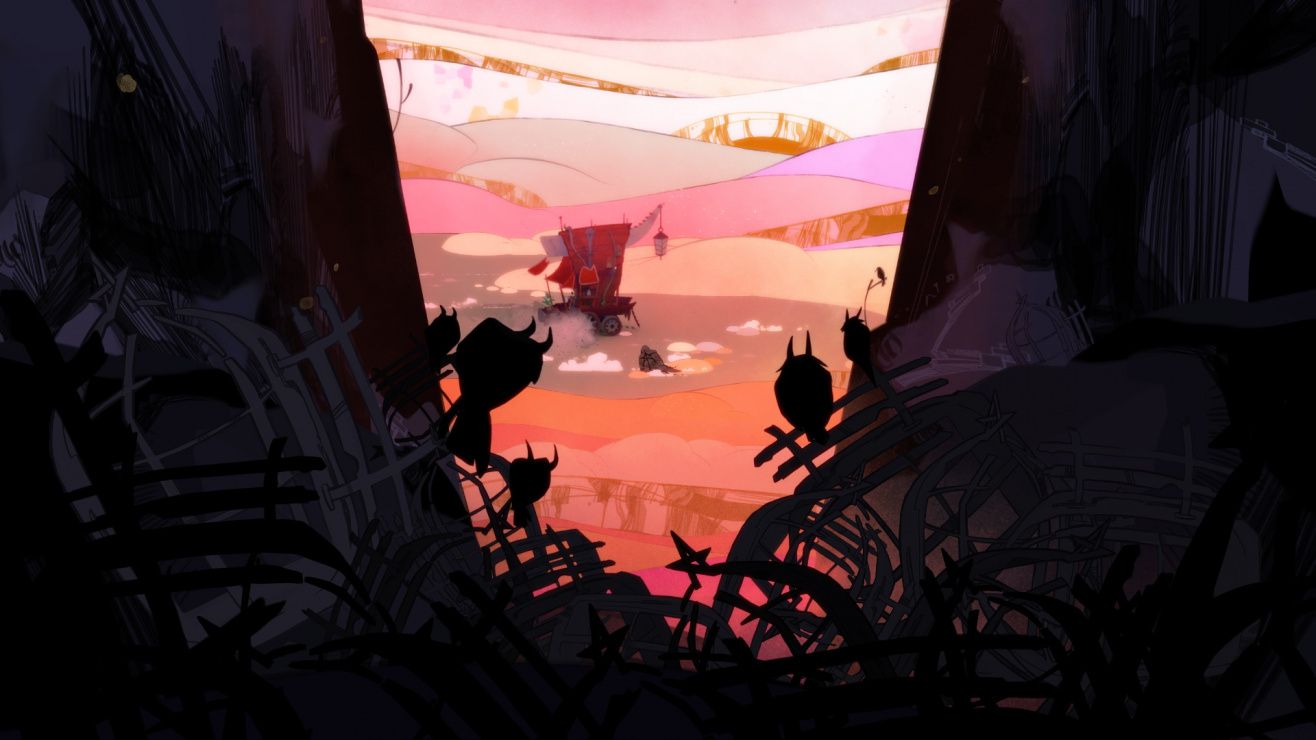 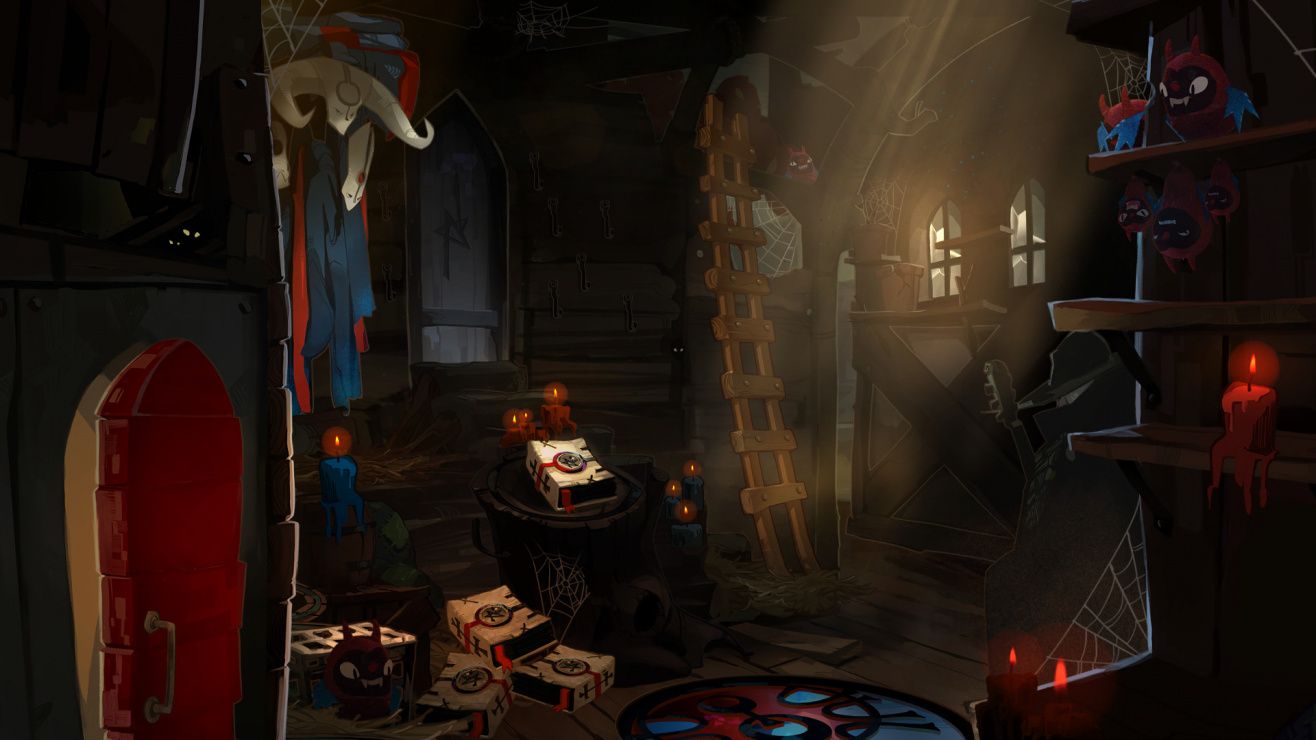 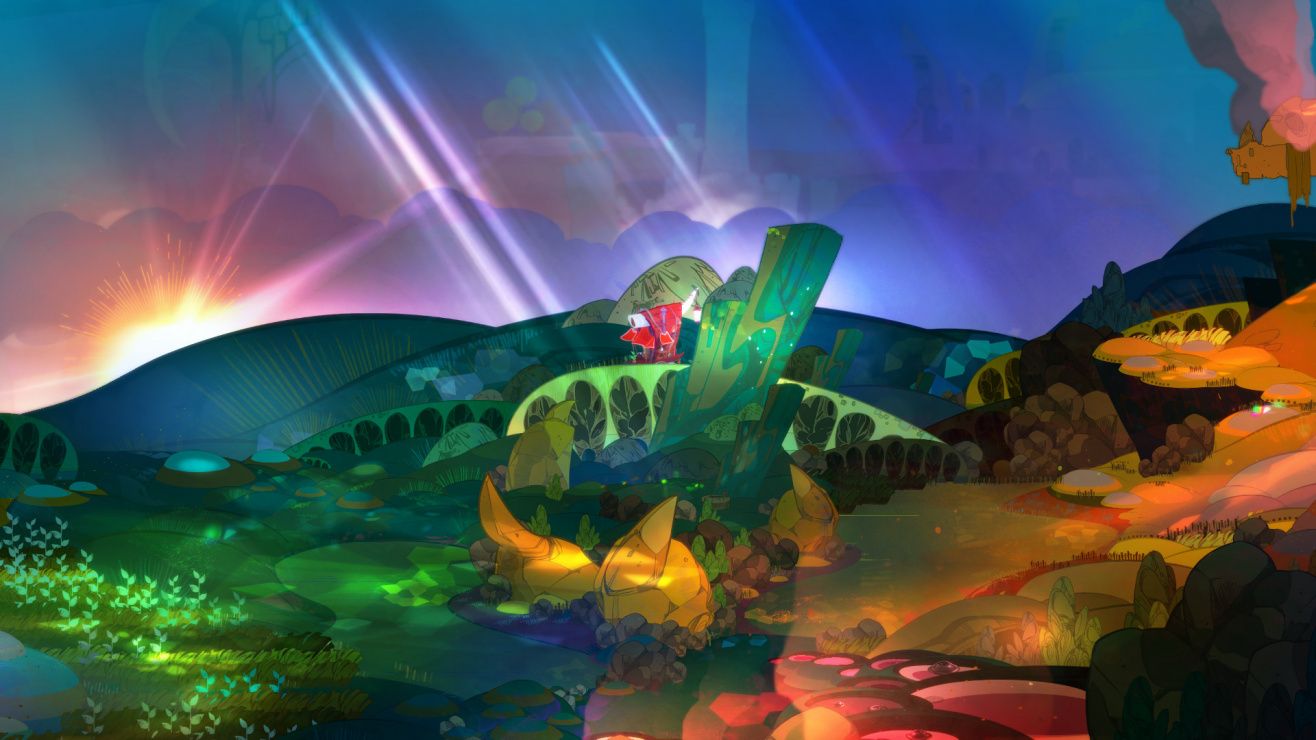 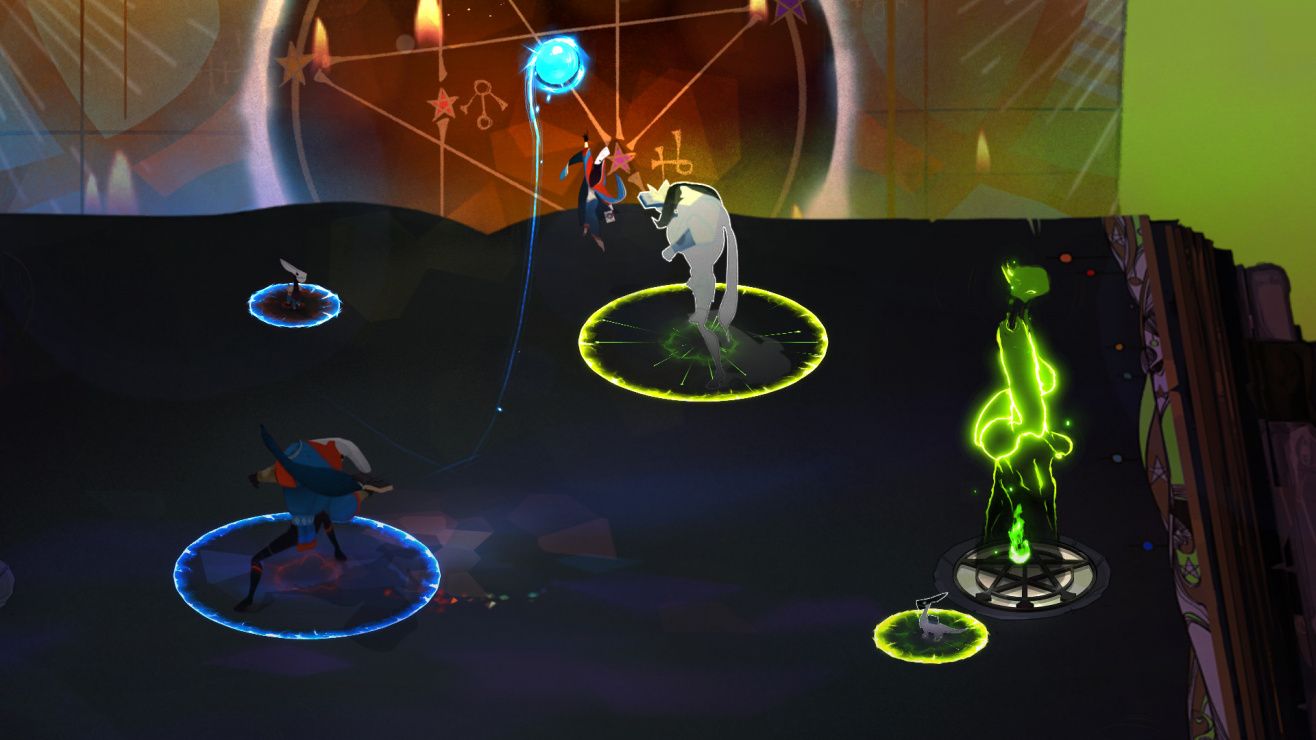 PC Steam Console Playstation action indie adventure rpg fantasy atmospheric colorful stylish
Pyre is a party-based RPG from the creators of Bastion and Transistor. Lead your band of exiles to freedom through a series of mystical competitions in the Campaign, or challenge a friend to a fast-paced ritual showdown in the head-to-head Versus Mode. As you traverse the desolate and beautiful Downside, you'll battle against a colorful cast of adversaries in pitched, high-stakes confrontations. Each victory (or defeat!) brings your exiles closer to enlightenment: Whether you prevail or you fail, your journey continues in a branching story with no ‘Game Over’. From the vibrant hand-painted artwork to the evocative musical score, every aspect of Pyre's presentation draws you into its fantasy world.
Share Share Share
Promote for 50G

Overview
Pyre is a party-based RPG that is a slight mix between fantasy-basketball and a visual novel. Now, this does sound confusing, but rest assured, you're not alone. As strange as the genre may sound, Supergiant Games has managed to combine all of those elements found in team-based RPG's, combined them with a sports-like gameplay inside of a fantasy setting, while creating character arcs the player feels invested in. I was initially hesitant to check this game out given the 'team-based strategy' element but if you do take a risk, you may find something memorable.
(+) Pros
• Fantastic visuals and character design
• Top-tier voice acting
• A compelling story where your choices do matter and does change your playstyle
• The music is wonderful by Darren Korb
• Strong replayability for future playthroughs

Pyre is, in my opinion, Supergiant's best game so far, and I wish many more people would experience it. Differently from Bastion and Transistor, your battles aren't roadblocks on your journey. They are decisive moments to the destiny of the narrative and the cast of characters you get to know and love as you travel through the Downside. The story, and worldbuilding as a whole, are very involving and memorable.
On the gameplay side, there's enjoyable complexity to what each kind of character can do during the Rites, as well as many compelling moments of ludonarrative harmony. The difficulty is highly adaptable to your preferences and rewarding as you take more risks. As for the art style and soundtrack, Pyre is a Supergiant Games production. If you played Bastion or Transistor, you know you won't be disappointed, but surprised over and over.

-Quick Review-
Pyre is a two fold: Story Based, "Basketball-esk" game. ...Hey, this is my review, I'll describe it how I want.
You play as a strategist for a group of exiles known as the "Nightwings", they perform "Rites" which I've always thought of as "if basketball let you jump into the hoop yourself". It's kind of hard to describe briefly. Read on.
-Detailed breakdown review-
Story: You're known as "The Reader", reading has been banned in this world, literacy has been outlawed because of some dummy in charge back in the "Commonwealth". You have been exiled to an a land where there's only one way in, and one way out. The way out? By participating in "Rites", you get the opportunity to compete to earn the freedom for a specific exile.
What starts out as a simple "We're getting out of here" quickly turns to a large scale plan to overthrow the commonwealth that has exiled you in the first place... But to accomplish this ambitious goal, you'll need to help fellow exiles earn their freedom so they can help on the other side.
One of the most compelling (and stressful) elements of Pyre's story is the amount of "players choice". At the first few choices I thought "oh yeah, I bet *serious voice* Jodariel will remember this...
Well the jokes on me, because they DID remember it later on in the game. Even the END credit reflected my choices in the SONG they sing which characters "found their freedom".
Pyre has an Incredibly well written story! (And deep... with lore, I was asked though provoking questions where I literally stepped away from my computer and thought "hmmm... What does 'freedom' mean to me... which one of these options is closest to my beliefs")
Gameplay: So I keep talking about the gameplay "feeling like basketball". The rules seem simple, the mechanics are complicated:
Two Teams. 3 players on each team. An Orb spawns in the center of the stage. You grab the orb and throw it (or it and yourself) into the enemy's goal (AKA their "Pyre"). This does damage to the Pyre, once the Pyre's Hitpoints/Lifepoints/flame reaches 0, you win!
My method of play was to use my mouse for movement, and the keyboard to jump/fly, salute, pass, and switch characters.
Right Click is a charge attack. Left Click (in my case, I click and hold) directs where to move. W to jump or fly. Spacebar to switch/pass the orb between characters. And shift to Sprint. You can also press T to salute which can be specked into sometime useful... or a taunt. I didn't really use it though.
It took me playing through the whole game on the standard difficulty to FINALLY learn how to start using my characters "as a team", instead of a proverbial 1v3. There's a great deal of depth and complexity to playing... to the extent that I felt like I didn't dare take a prolonged break between play sessions or else I would lose the familiarity of the game mechanics!
Furthermore, each exile has unique skills, mechanics, and a leveling progression system that has two distinct tree's to build from.
All that to say: Man... That was tough. Just playing through regular was stressful! On that same comment, I did succeed in all rites except for one of the last ones where I did reset (I was being destroyed!)
I wasn't sure if you could lose or not at first, but when I realized "oh... these other teams could get their freedom... then I wouldn't be able to free one of my characters... OH NO!"
And honestly the strain just immersed me all that much more. I was completely invested on "how do I get the happiest ending possible. Pleaseeeee Supergiant Games, I need a happy ending."
Conclusion: Depending on how thorough your are, and how fast you read (or skip reading... but why would you do that? It's arguably the most important part of the game... and probably a not-so-subtle-hit from the developers about literacy. haha). I played for about 17 hours before completing the main story. Don't get discouraged after you free your first character the "cycle of rites" speeds up, so at that point you're probably about half way through the game... but the dialogue and characters kept my interest and investment. ...You get to know the characters that stay with you much better!
I haven't even mentioned the artistic styling/theming, the outstanding music... just really the regular earmarks of a Supergiant Game. There's so much to unpack I don't really think I've done it justice in this review.
Unscripted Thoughts Video:

This is, the best game I have played in my entire life the story is beutiful, I too someday hope to turn on my fascist government after they s ent me to basketball purgatory

Despite being a long time fan of Supergiant (Transistor is to this day one of the few games I've ever preordered) I was quite sceptical about Pyre, especially due to its sport-y nature. Boy, how wrong I was. Not only is Pyre's story extraordinarily charming (probably the best execution of make your own path I've seen in this media), characters incredibly varied, art and music as marvelous as ever, but pyre's ritual gameplay is surprisingly fun as well.
And it all works together so, so well.