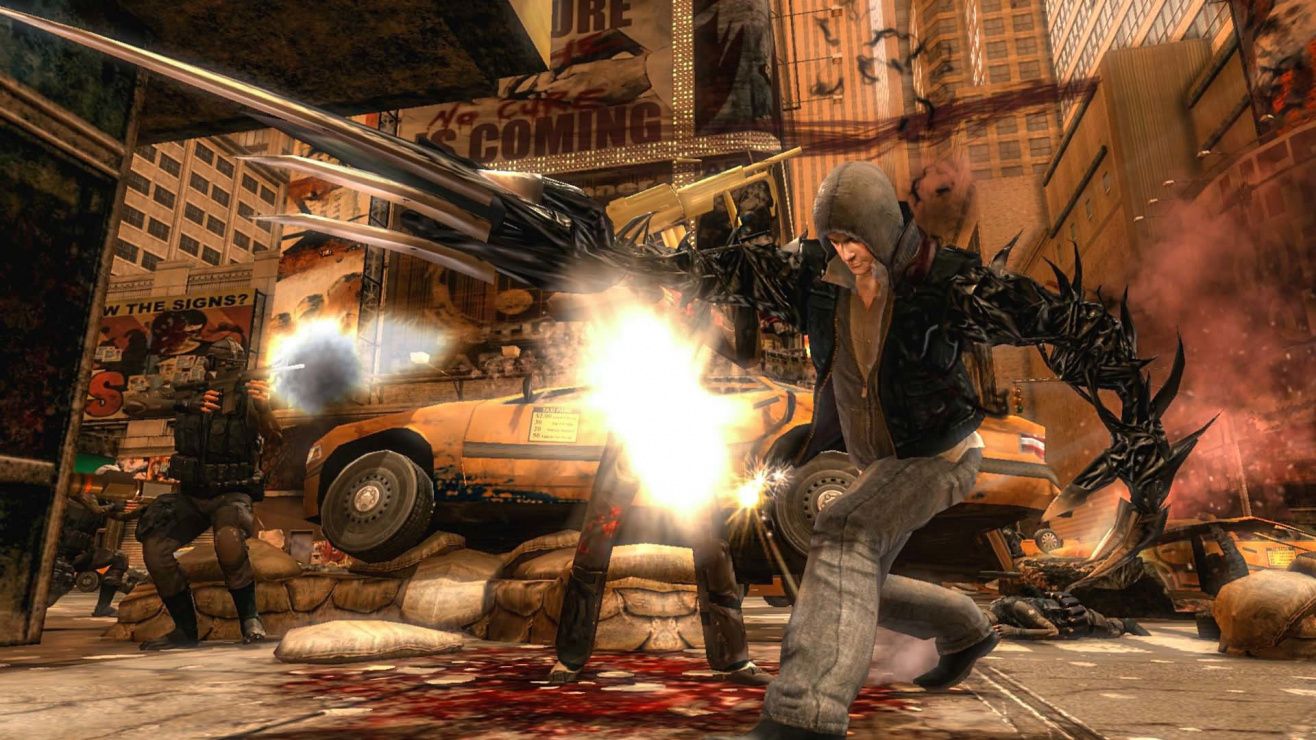 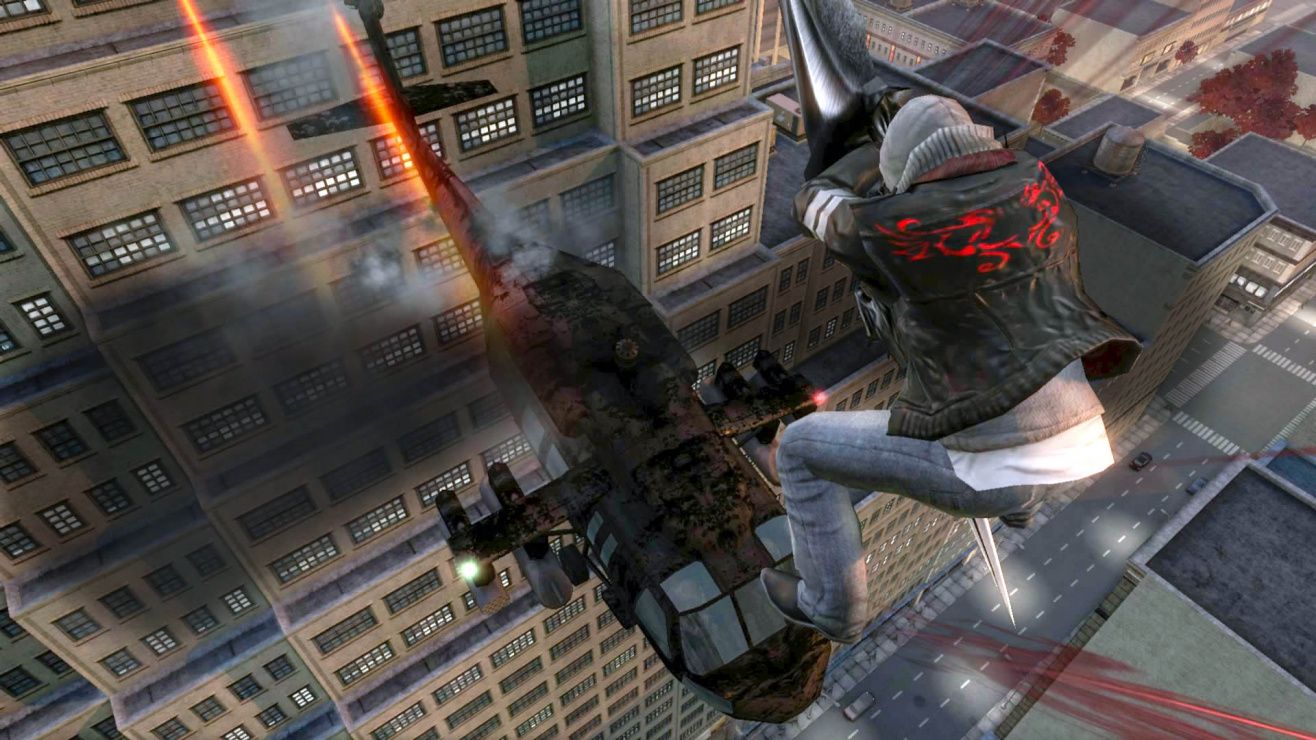 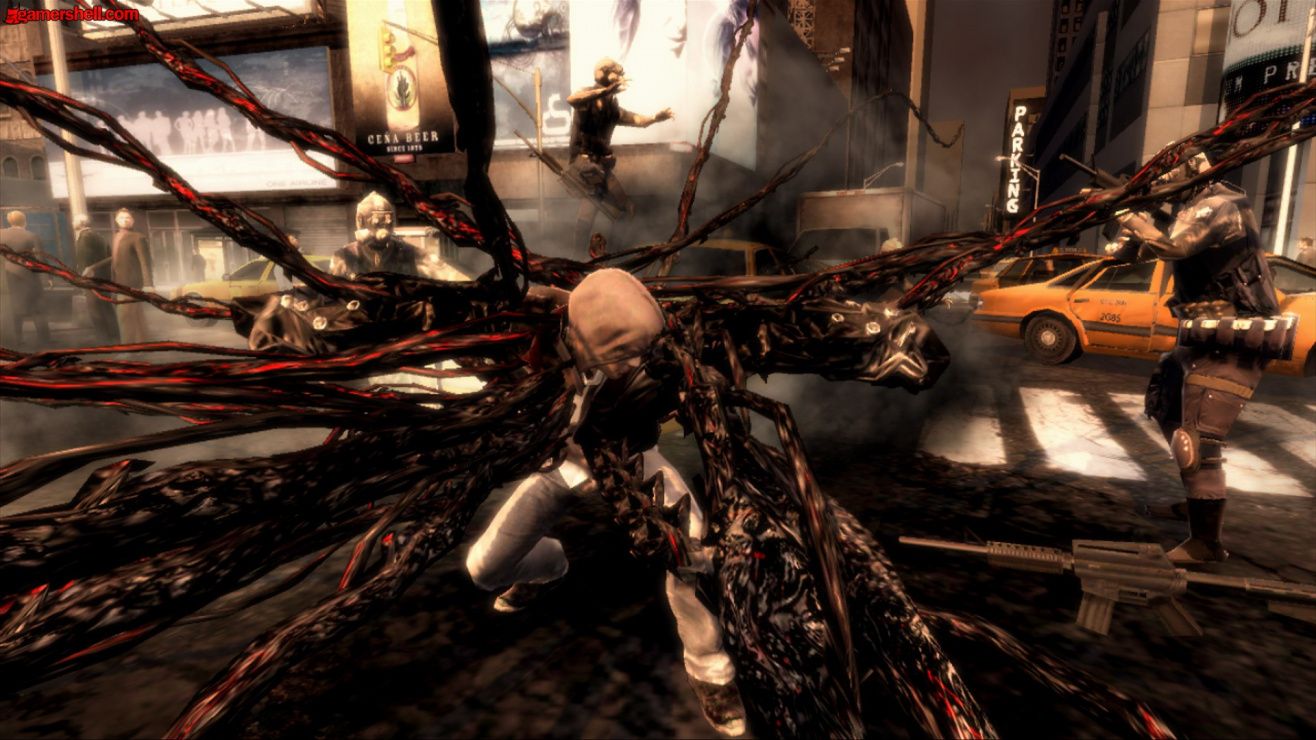 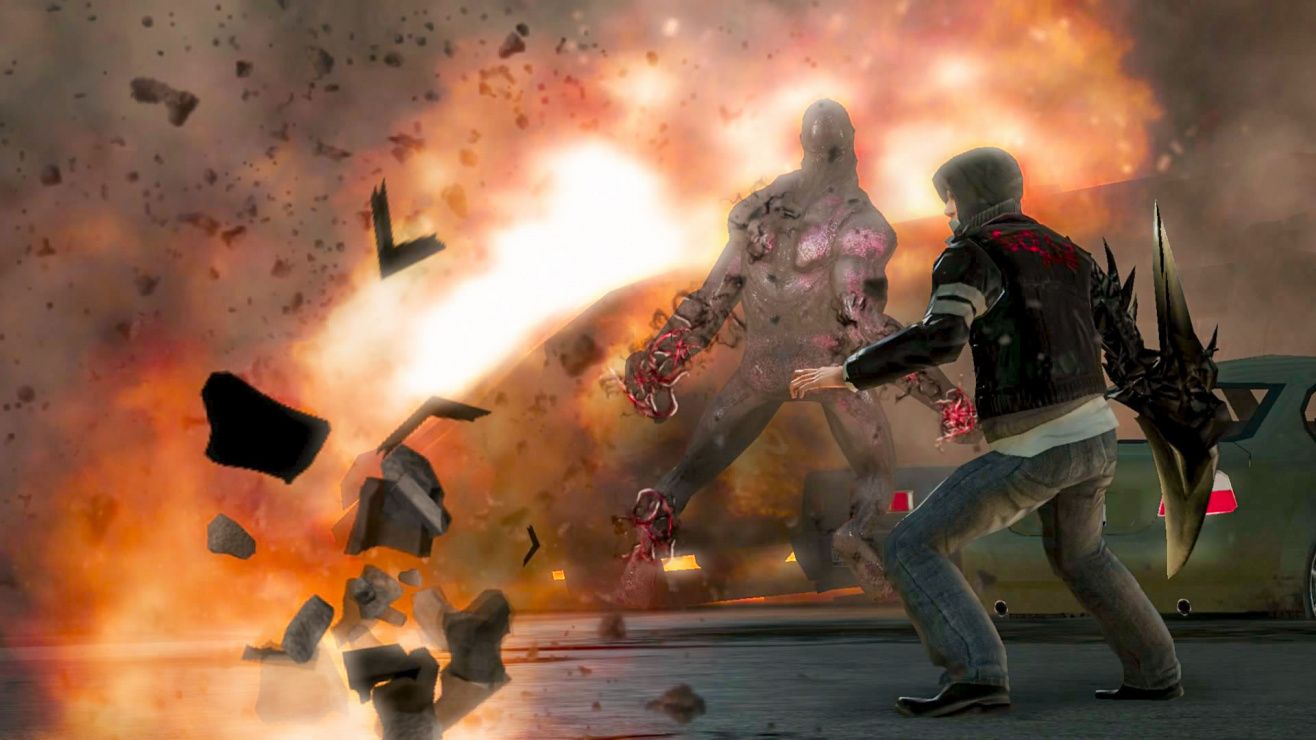 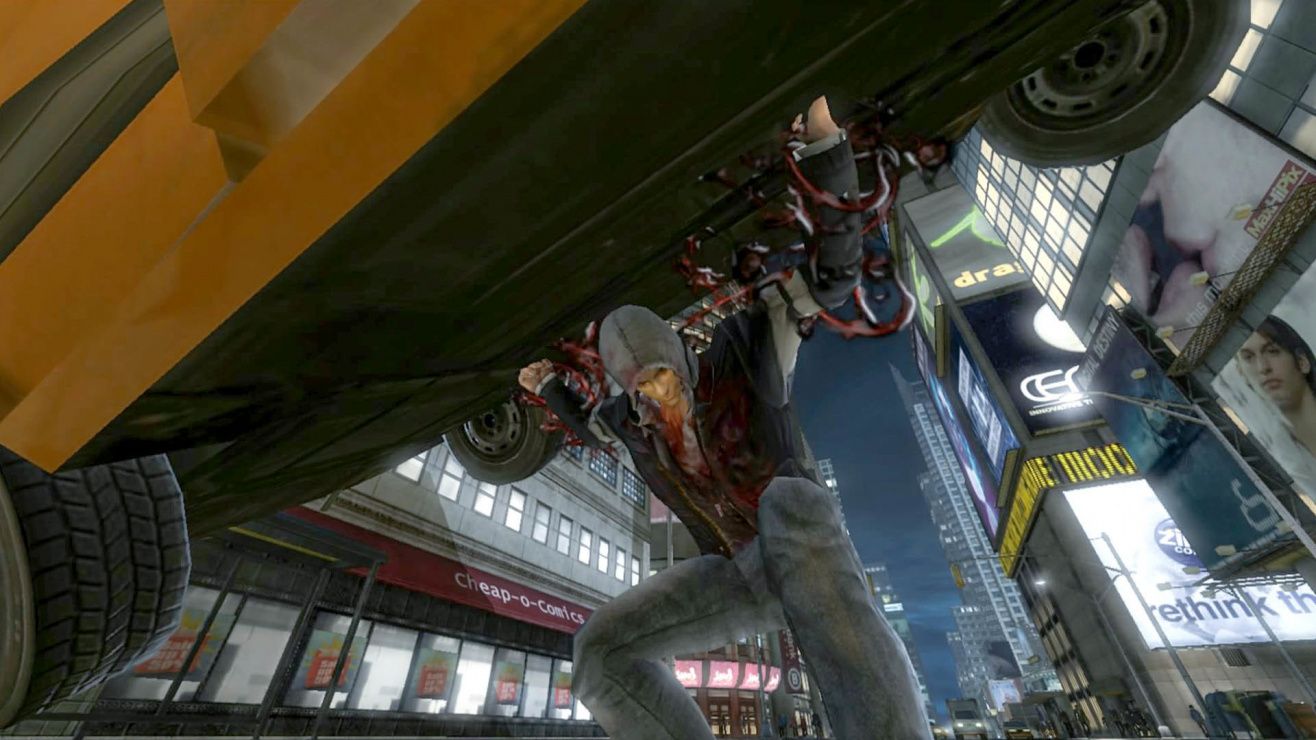 PC Steam Console Playstation Xbox action singleplayer rpg dark open world superhero supernatural bad mutant
Discover what lies beyond the edge of evolution. Play as Alex Mercer, a genetically mutated shape-shifter with no memory of his past hell-bent on solving the mystery of his existence as he tears through a densely populated New York City moving with Parkour-style fluidity and consuming anybody that gets in his way... assuming their physical identity, memories and abilities. You are the Prototype, a man without memory armed with amazing shape-shifting abilities, hunting your way to the heart of the conspiracy which created you; making those responsible pay. Reconfigure your body to the situation at hand. From Claws to Blades to Hammers to Whips, choose the right weapon for the situation. Change to a shield or armor for defense, or use advanced sensory powers (thermal vision, infected vision) to track your enemies Seamlessly and fluidly bound from building to building, run up walls, bounce off cars and everything in your path.
Share Share Share
Promote for 50G

Things are better when they are in the memory.
Prototype was published in 2009. At that time, it was viewed as one of the most impactful action games along with Assassin’s Creed. Right now, Assassin’s Creed is still booming, yet fewer and fewer players remember Prototype, which in my view also has the potential to expand into a universe, and Activision is who to blame.
I spent a great deal of time on this game when I was in junior high. I thought it was the coolest game in the world. Running on the skyscrapers, killing monsters and destroying tanks with cool super bio power, no game at that time or even now enables players to do those. It is also one of the first games I played and has a big impact on me. Almost ten years has passed, I am more mature in perceiving a game and decided to relive my memory so I bought it on Steam and gave another try.
In modern perspective, this game is an example of how you should not make an open world game. The open world lacks engagement with players, just offering a massive playground where you can freely run, though I memorized the map of Manhattan where I have never been to because of that. The action lacks coherence, meaning you need to stop and do the whole motion again if you have finished one, and you are easily to be interrupted. Look at Devil May Cry, Dark Souls, Sekiro, even the first Assassin’s Creed produced in 2008, they are much better in terms of coherence. The story is meh and meaningless but gave you excuses to kill some guys.
It is not fair to judge a ten-year-old game with today’s standards. It probably was a good game back then. Emotionally, I like this game because of nostalgia, so I still give a thumb up, but that is how it is if you decide to play it in year 2019.

It was a blast from past, really fun, nothing like gunning down hundreds of thousands civis with an A1 Abram tank to make sure the virus doesn't spread at all, you call that a war crime, I call that acceptable casualties.
10 out of 10 buy it on sale

Around 10 years ago, I was in an internet cafe with some friends, and as I was doing some surfing, one of them came up to me and recommended me this game to play, saying it was pretty good or something, so then I thought, if my friend liked it, maybe I would too. Turns out I was right, Prototype truly was the most insane and badass thing I ever experienced. I literally gave up everything I was planning to do in there and just spent all of my time on that game only. Sadly, I wasn't able to finish the game that day due to the length of it, and I wasn't able to stay overnight in that internet cafe either, because my parents would kill me lol. Fast forward 10 years later, I finally afford a good PC in order to play this game again, and to be honest, my feeling with it hasn't changed much since then.
The Story: You play as Alex Mercer, the man who lost his memory due to a recent event. Your job is to find out who is responsible for his situation and the truth about his past. I like the story of Prototype for the most part, it's not the most compelling story of all time in anyway, but it's good enough to keep my interest until the end, though there is one thing that makes me feel a bit upset about it. Without diving into spoilers, I'm just gonna say that I don't like how they treat the character Dana later in the story. I just wish that she could be involved more, because she does play a major roll in it after all.
Gameplay: This is where the game truly shines. Let's talk about the traversal first of all. You can travel around the city using different types of movement, whether it is running, jumping, gliding, or airdashing, you name it. It's smooth and makes you feel like you're doing parkour or something, but I think you have to experience it yourself to truly understand it. The powers in this game are no joke either. As you progress further in the game, you can unlock more weapons and abilities in your arsenal, each comes with their own usage and special attack, though the most unique and fun ability in the game I would say is Consume. You basically can kill and consume anyone in the city, thus taking their identity and memory. it is often used to get inside a military base, so you can get the required information without raising the alarm. However, this ability often feels unbelievable, as the enemies won't bat an eye at you as long as you look like one of their friends, even though they just saw you glide above their head 5 seconds ago, which results to some of the most funny moments ever. Some enemies can be pretty challenging as well, especially at the beginning of the game, where you don't have the power needed to defeat them. Boss fights are also very tough if you don't know their weaknesses and use the right tools against them, as you will die a lot if you're not careful enough. Still, the enjoyment I have with the game didn't wear off because of all the badassery the game has to offer, and it will always be the game that has one of the most fun gameplay in my opinion.
Sound: Prototype has a decent voice acting, but it is quite forgettable because of the serious vibe that the game is based on. Everyone acts serious about everything, and there are little to no emotional moments that make you truly care. I do like some of the soundtracks in the game though, they help elevating that satisfying feeling of me murdering everything and everyone insight, so good soundtracks overall.
The Negatives: I don't like the way they handle the side missions in Prototype. There are 2 major side missions in the game, Events and Web of Intrigue. There also are different types of Events, like Kill, Consume, Movement Event, and more. These missions can be fun to play for the first time, but feels really repetitive if done repeatedly. And because there are no achievements in the game (on Steam at least), it demotivates me from finishing all of them. Web of Intrigue is basically a collection of consuming events, you find these targets as you travel around the city to consume them in order to reveal important memories that related to the story. The problem I have with it is the game provided me no clues to find these people, they just randomly appeared on the mini map when I was doing different missions and and tells me to go to that target and consume that person. And because Prototype is an old open world game, it suffers from the low variety problem that other old open world game has. So one time I was consuming a person in Web of Intrigue mission, and about 10 minutes later when I found another target and consume him, I realized the person that I consumed 10 minutes ago looked exactly like the dude I just consume now, which is really weird if you ask me.
One more thing, I personally didn't encounter any technical issues with this game, as I just follow this simple guide. If you are one of those who have issues with the game, maybe it will help you:
Final Verdict: 10 years later, Prototype still manages to give me back the experience that I once had, creating chaos in the most badass way possible. I definitely recommend this game to anyone who likes parkour, or anyone who wants to commit mass murder just for the fun of it (In game only of course). 8/10.

The game itself is fantastic. However the amount of technical problems on modern PCs makes it's difficult for me to recommend at the $20 price point. Upon first launching the game I had only 20fps in all of the menus and in game. Apparently this was caused by having too many HID Compliant devices plugged in, which the game for some reason samples on every frame. This is easily resolved by unplugging every usb device except the controller or by disabling almost all devices listed in Device Manager as Human Interface Devices (HID). Despite this I still think this game is worth picking up, but perhaps only when it's on sale.

Prototype 1 and 2.. They do work with Windows 10, They are great games and below is how to get them both working
1.) Disable Hyper Threading in your Bios. (sorry but its a must - just dont forget to turn it back it on)
2) Disable any "Human Interface Device" your not using or that you have, in Device Manager. For me it was like 3 or 4 of them. Some people only have 1.
3) Download the Widescreen Resolution Fix for Prototype 1 : "
4) for Protoype 2 Download The Following Files :"
5) Set your default audio playback rate to 44100khz or below.
Enjoy.

The missing link between
Dark Sector and Warframe,
Spider-Man: Web of Shadows and Saints Row 4.
Controls and mechanics can be a bit finicky and floaty.
The free roaming is kinda fun.
The collectibles are not exactly good incentives to play the game, especially if you intend for a second run.
Bosses can go from manageable to frustrating, caused by said controls.
Story's sorta interesting, and it's a big SORTA. I'm sure there are things to read into but I'm not gonna.
This game is quite a relic, decaying relic. Apocalyptic angst galore, if you like such things, get this on sale.