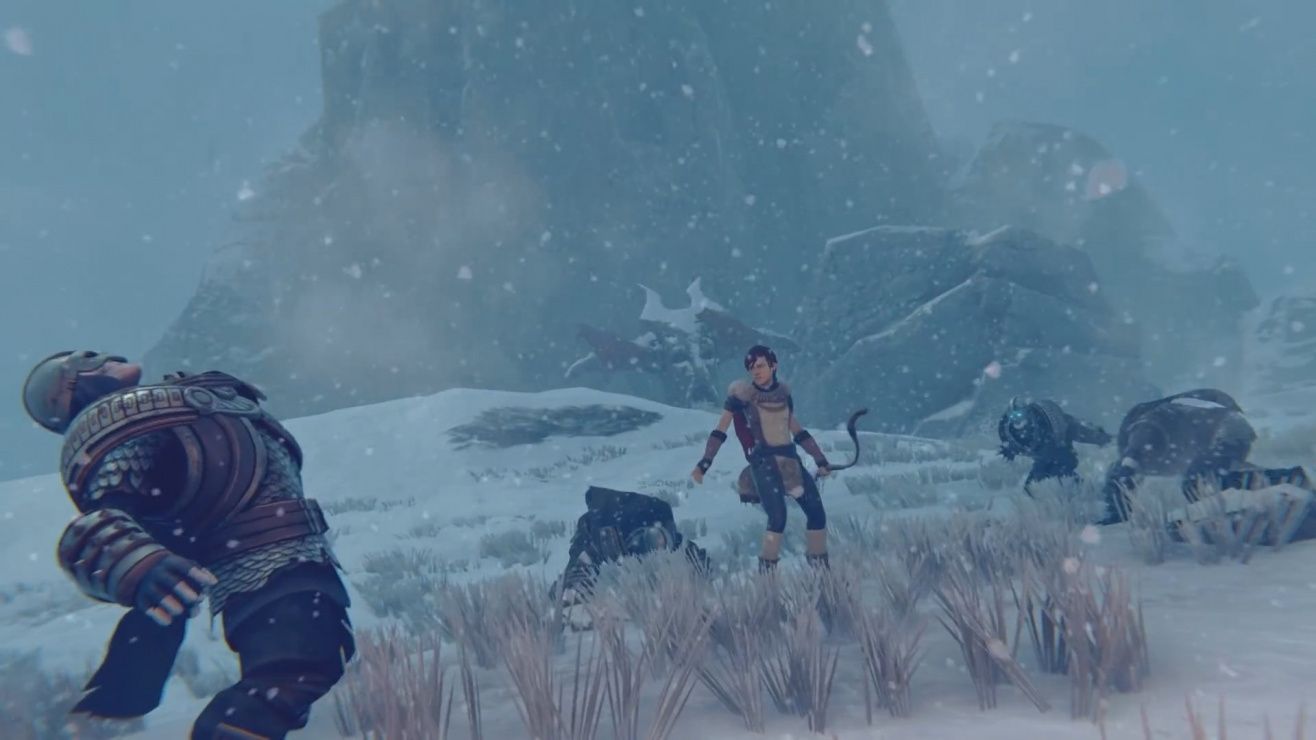 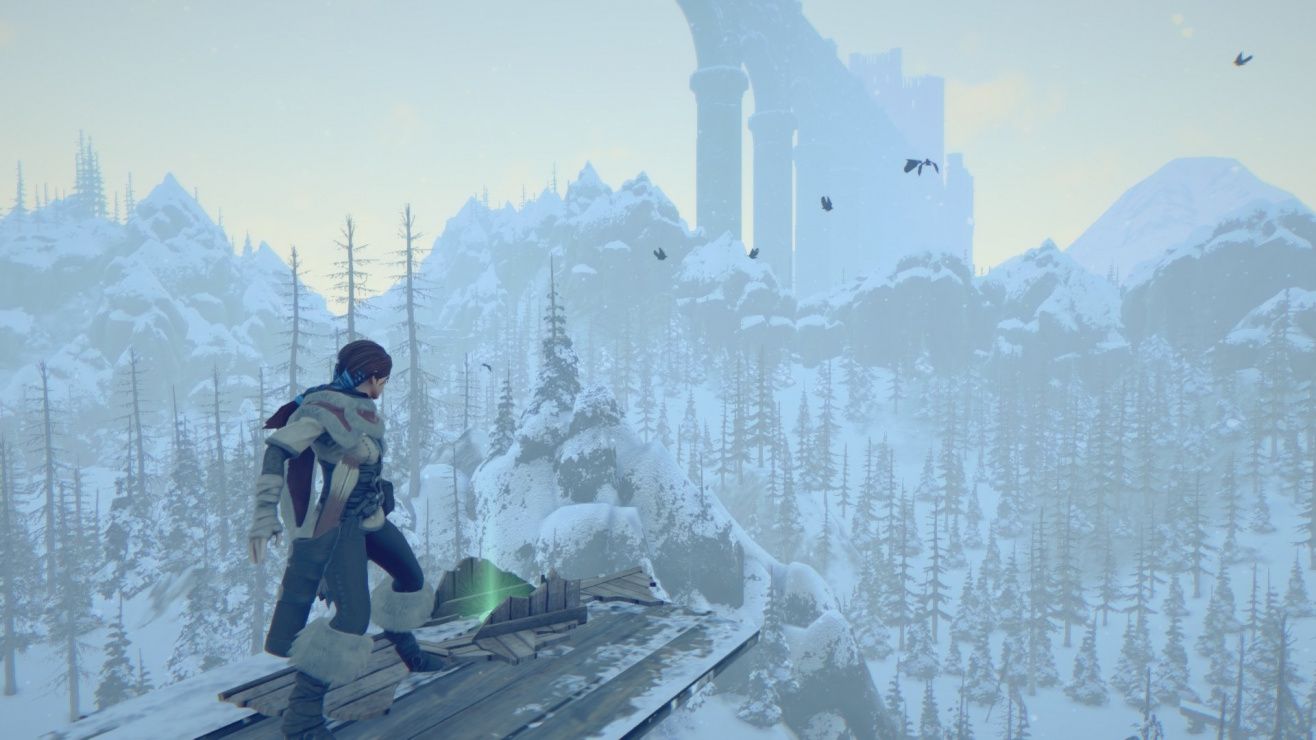 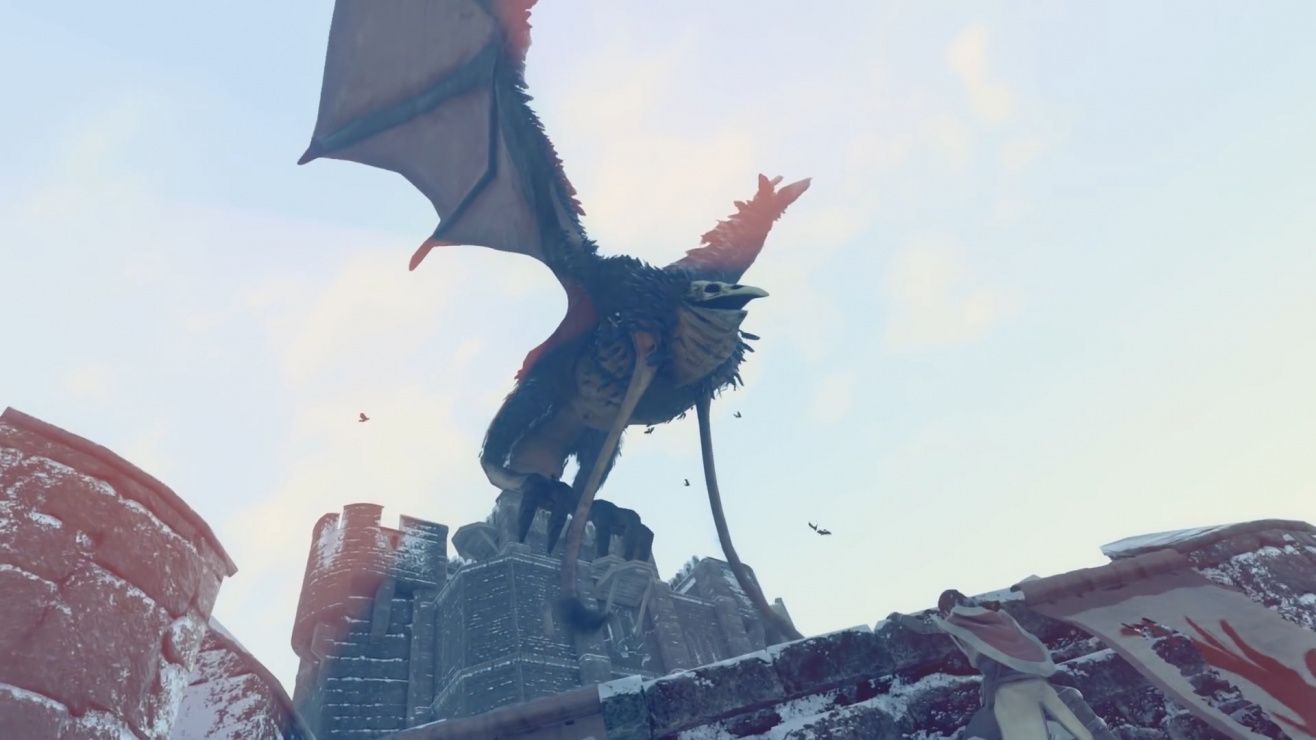 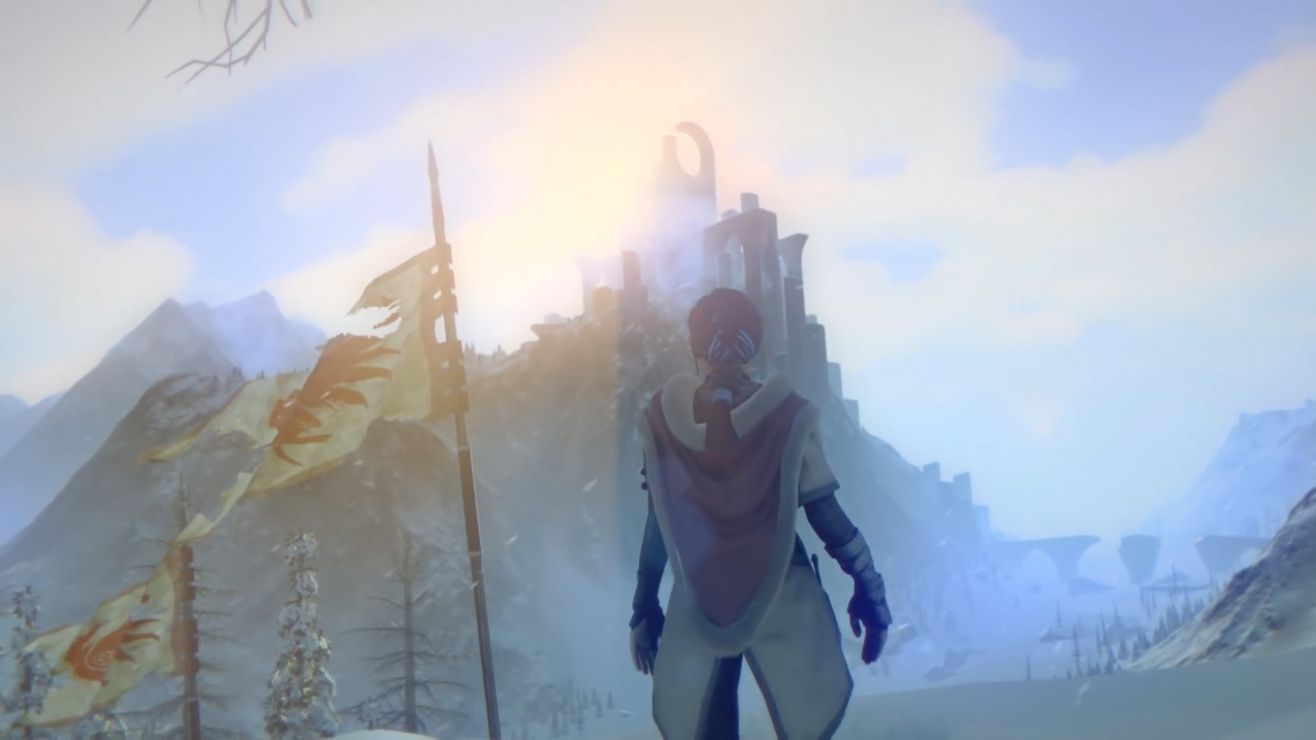 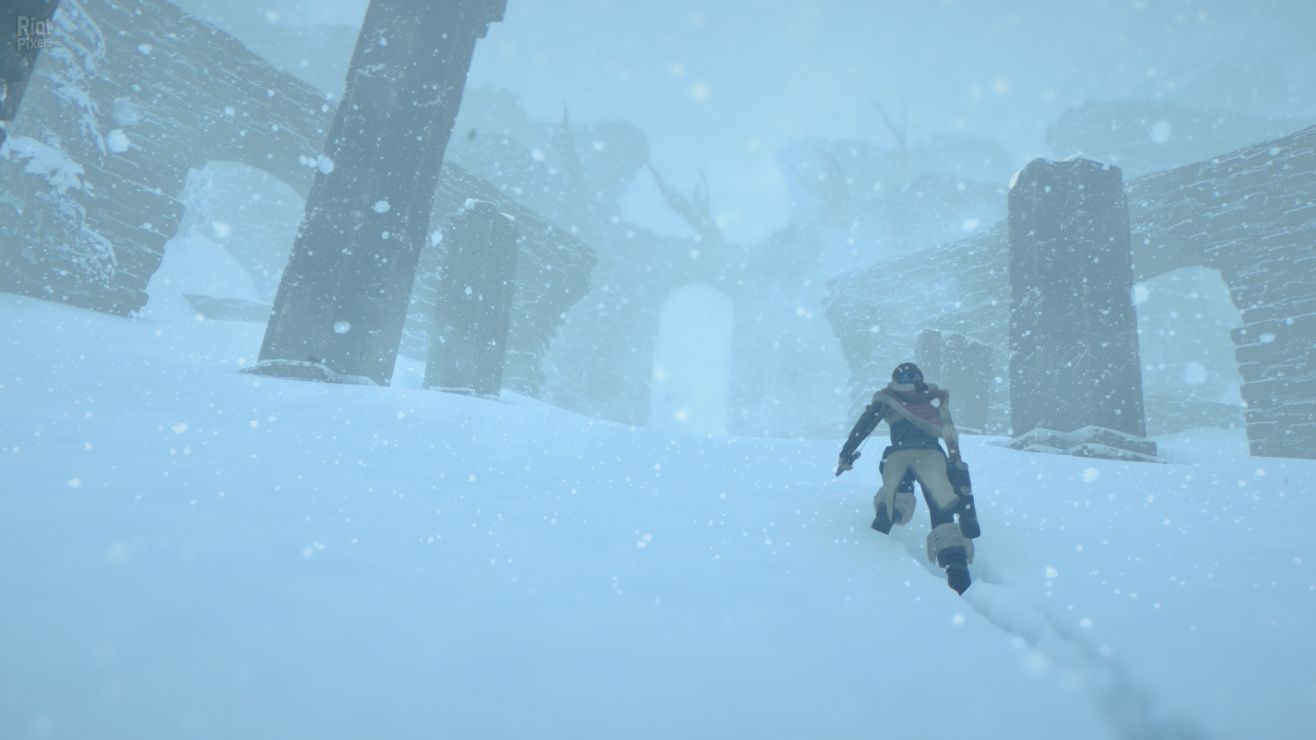 Prey for the Gods

PC Steam action adventure rpg survival role-playing sword dragon winter
Praey for the Gods is a boss climbing open world adventure game where you play as a lone hero sent to the edge of a dying frozen world to discover the mystery behind a never-ending winter. Arriving with only the clothes on your back, you must survive the colossal dangers that you encounter. To restore balance and reclaim the land from the brink, you will be faced with questions that not even a God knows the answer to. Overcome impossible odds to climb atop and defeat the massive beasts that are bound to this land. You can climb on virtually anything you can get your hands on, from ruins and mountains to the massive beasts that inhabit the land. Ascend to the tops of mountains and then glide over the open world to reach previously inaccessible locations. Swim in frigid water to uncover hidden locations that contain secrets and treasure, but don't stay in too long or your swim could become your last.
Share Share Share
Promote for 50G

I played through the early access on "HARD" difficulty and "SURVIVAL" mode.
Shadow of the Colossus is my favorite game of all time so Praey for the Gods has been something I've been really looking forward to playing since it was announced. It finally seemed far enough in development that I decided to bite the bullet and buy it now.
It's incredible to me that this game is made by 3 people. It is very clear that this game is a labor of love. It borrows MANY aspects from Breath of the Wild and Shadow of the Colossus and puts those mechanics in its own unique universe.
When I bought the game I was most excited for the boss fights (since that was my favorite thing in SotC). However, I was surprised that my favorite thing about the game was the exploration. The Breath of the Wild mechanics are very well done. The world it has you explore with those mechanics is beautiful and interesting to explore. The game has a great sense of place. It feels very "organic" I guess is the best way to put it.
Now just because the exploration was my favorite part does not mean that the boss fights weren't fun. Far from it. The fights were great as well. I think the only thing holding the fights back is the level of polish needed in some fights. The animation needs some work. Animations need to flow more seamlessly in some spots. You can clearly tell when an animation starts and stops for certain animations. It is important that this is polished because that helps sell the idea that you are actually fighting this big and heavy lumbering creature (at least to me).
I would like if there was a button that allowed you to focus on the boss like in SotC. I loved that button and that would help here. The camera should also be a LITTLE more cinematic during a boss fight. Other than that, the bosses are very cool and it indeed was "HARD". I died at least once at every boss. The flying serpent was my favorite. Very fun boss. . But yeah the boss fights right now are still "good", but they will be "awesome" with enough polish. I cant wait to see and play the last 2 fights.
The "SURVIVAL" aspect of the game was very fun and I feel is the intended way to play. You cant just aimlessly wander with no repercussions. Were you go is directly influenced by you health, tired, hunger, and warmth meters. It doesn't get in the way. The fact that it pulls this off is a feat in and of itself because normally survival stuff annoys the hell out of me in games. But here I actually really like it. The feeling of anxiety of walking down a path with low resources and low status meters when a blizzard starts is very real lol. The crafting is also fun and I enjoyed the process.
The weather is awesome and feels very intense. This and Death Stranding have the best winter storm effects I have ever seen both graphically and how they physically effect your character.
Sound is very well done too. I liked the music. Sounded good on my home theater setup.
As to what I think needs to be better in this game:
1) Your characters sprinting animation doesn't look right, It looks too "canned" and is a little exaggerated I feel. The regular running one looks great though.
2) Your character needs to lean a bit into their turn when they run. As of now they unrealistically pivot as if unaffected by momentum.
3) I don't really like your characters face when she is fighting a boss. I find it unrealistic because anyone that is fighting something 100x bigger than them doesn't have an angry grin on their face. I don't care how brave you are, you are gonna be scared out of your mind. Sure, she can have a grin... but Wander in SotC had a look of "Man this thing is giant and i'm probably gonna die but I have to try and fight this thing" which i find to make a lot more sense. haha.
4) A boss "lock-on" button should be added. When you press this button your character should look at the boss and the boss should always look at the player (when possible). This would add to the intensity of the fight imo.
5) Some boss animations reworked to flow better and a transition animation for pulling out your parachute.
6) HDR support would be awesome. I have an LG C8 OLED and snow and HDR go together like... well... two things that go together really well.
Anyways, as of right now I would say the game is a about an 8.5/10 but it has the potential to be a perfect 10 to me. I still think it is worth getting now to support them and also because it's, ya know, really good.

Pros:
+Best winter visual and audio effects I've ever seen in a video game.
+Some stellar Shadow Of The Colossus gameplay.
+No horse, but there's a grappling hook that defies the laws of physics to let you travel faster.
+All the colossi are epic, fun and awesome... save for one.
+Hunting was fun. You get meat for eating (...or solving puzzles), plus loot for upgrading your gear.
+The cold is an omnipresent enemy and fending it off was satisfying. Nice frosty effects on the screen and SFX.
+Like in Breath Of The Wild, if you see it, you can go to it (mostly, it's early access so so parts are off-limits)
+Climbing to the very top of a huge mountain, on the verge of freezing to death, and being saved by torch-totem thingy.
+Minibosses were very challenging and satisfying to beat. Loot explosion! :)
+4th boss was just the friggin' best. Thank you so much for this (tear in my eye).
+...It's friggin' Shadow Of The Colossus!!!
Cons:
-Hunger can be a real hassle when fighting bosses. There should be some boxes with food in the arenas.
-The worm boss looked dumb, was frustrating to fight and not fun at all. Pales in comparison to the others (bird was epic).
-Main character has no turning animation : she just spins in place. Animations need improvement. This was a big thing in SotC
-There is only one miniboss, repeated in a few places. There definitely needs more, and different moves/weapons for some of the existing ones.
-Lack of stuff in many areas, making the exploration of them fruitless and discouraging further exploration.
-Equipment doesn't show up on character when equipped. No sheating/unequip animation. Make a cool one for each item!
-Combat with normal enemies is repetitive, predictable. Soldiers get beaten by spam. Ghosties get exorcised by 1 arrow.
-It would be cool if enemies and protagonist could dodge, block and roll. Also, charge attacks & dash attack would b nice.
-The wolf doesn't really do anything outside of cutscenes. It would be epic if we could call him and ride him (Princess Monoke style!)
-There are many tents in the game world but they serve no purpose. You can't even enter the small ones. It would make sense to use them as shelters from storms and be able to rest safely.
-Boots need antlers for upgrade. Okay wat.
-Arrows auto-switch to bomb arrows when they run out, without any warning, causing me to blow up wildlife by mistake lol.
-Bird boss has some camera issues.
-Satyr boss Echo (replay mode) had no texture and the game crashed after I beat him.
-One boss is depicted on a mural as being tied up. But he just be chillin' behind some fortifications which he just happens to effortlessly break through when you just happen to arrive. Some boss intro re-design is in order here.
-Off-limits teleport is clunky and immersion-breaking. Have a big bird teleport behind player and snag him to bring him someplace in bounds (could have some nests here and there).
Conclusion:
=>Game is still in early access, so problems are to be expected.
=>If you loved Shadow Of The Colossus, you'll probably love this too! Full price recommended!
=>Survival game fans, this one is full price for you too.
=>For anyone else, I definitely recommend this on sale to help them get it finished (and hopefully grow their studio)!

If you are a fan of Shadow of the Colossus, ICO, or The Last Guardian you will LOVE this game. Great inspiration, Better controllers and fantastic bosses! Can't wait for the rest of the game to be complete so I can finish it. Early Access allowed me to do 6 main bosses and a mini boss. Get this game it's well worth playing!

If you liked Breath of the Wild, and Shadow the Colossus - you'll like this game. Very epic fights

a welcome return for Shadow of the colossus fans...

This game feels like Zelda breathe of the wild and shadow of the colossus, crafting and fighting mobs is Zelda while the bosses are colossus. The game is incredible, definitely short and needs more content but that is to be expected of a early access game. The hookshot feels unnecessary, they few bosses in the game have spaces where you can hookshot but I don't feel like its necessary or as helpful as it should be. The ragdoll mechanics are a little annoying and I think combat with mobs feels pointless, they can give you some swords and bows but you don't use weapons in boss fight, so the weapons only help you fighting other mobs. They should try to better connect the mobs with the bosses so I feel like there's a point to weapons, like going around and fighting mobs to get better weapons helps you in the game. I think there should be dungeons with mobs, mini bosses, etc. and at the end of each dungeon there is a colossus boss. I think the game is great but needs work.