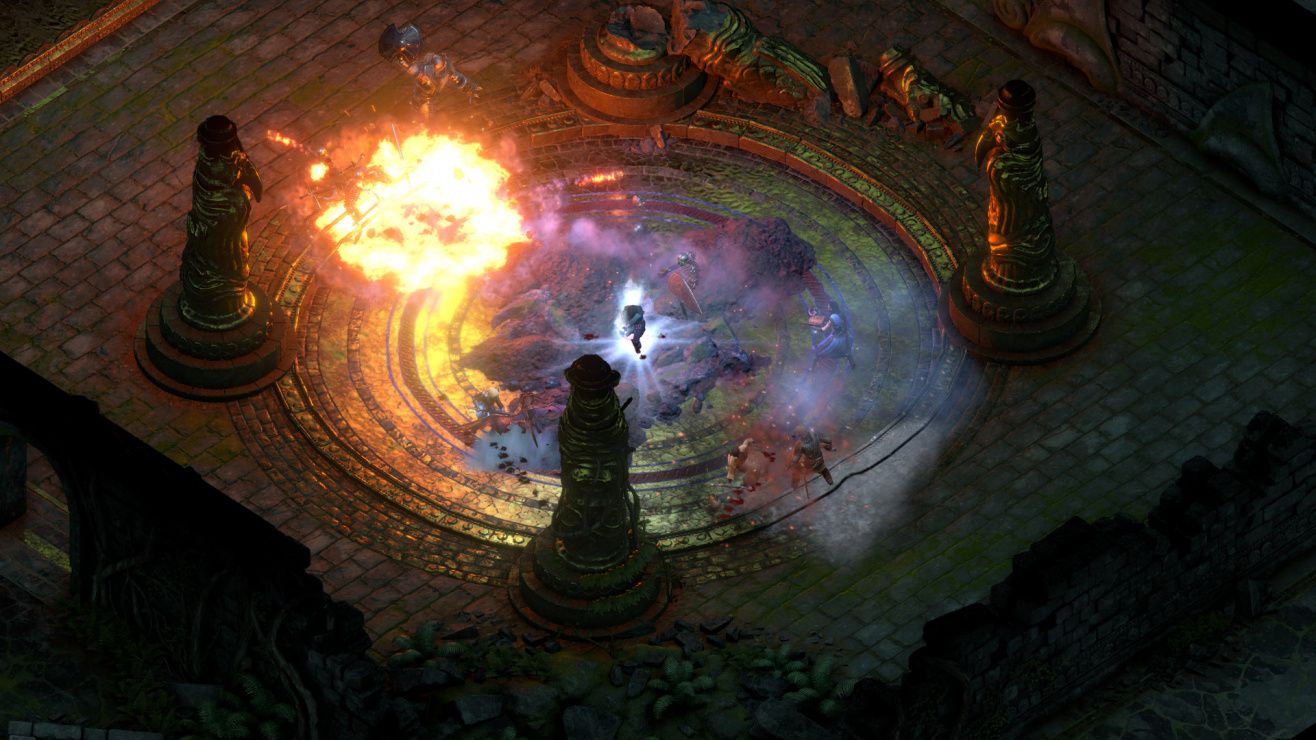 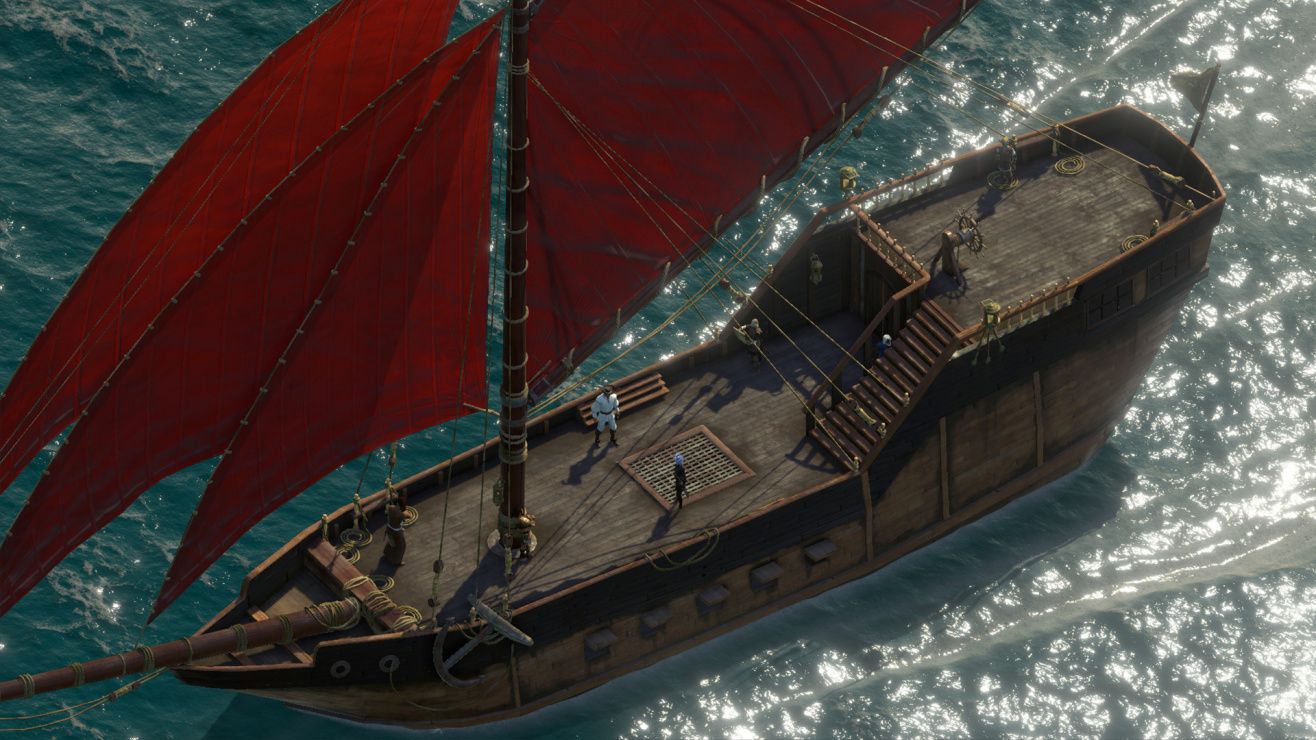 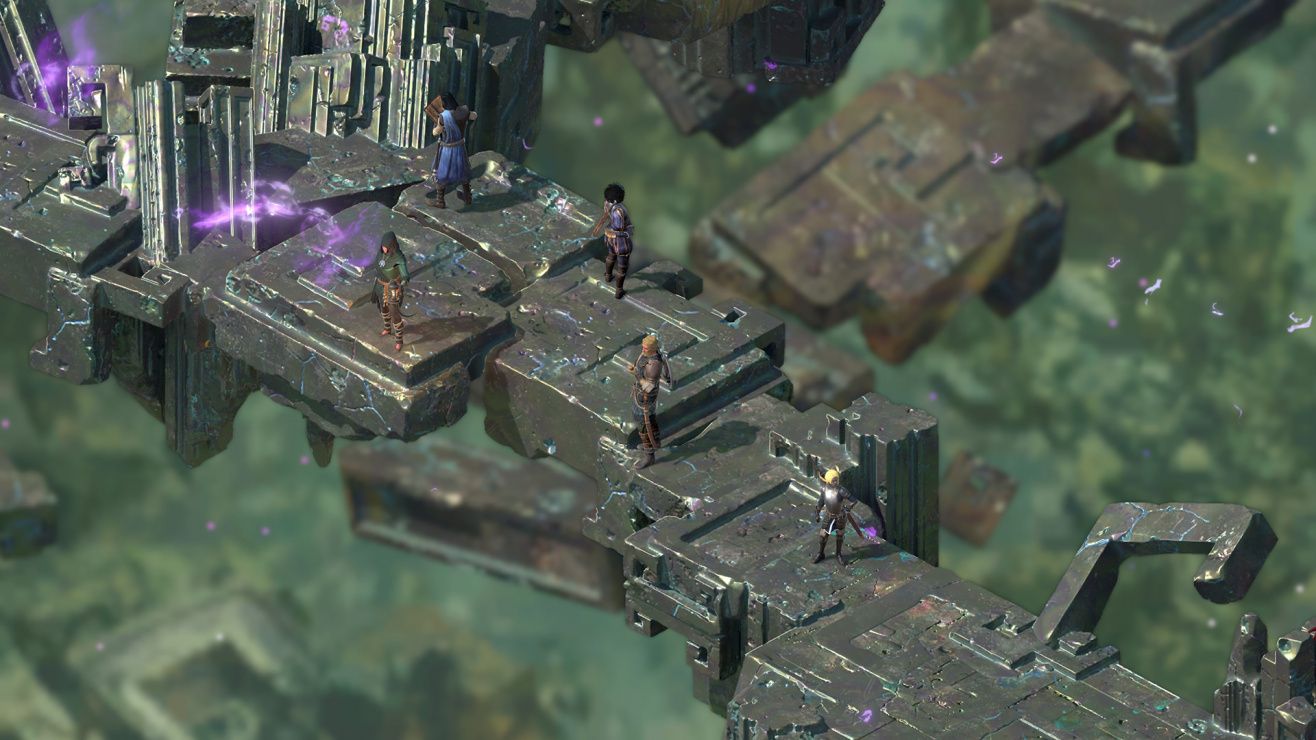 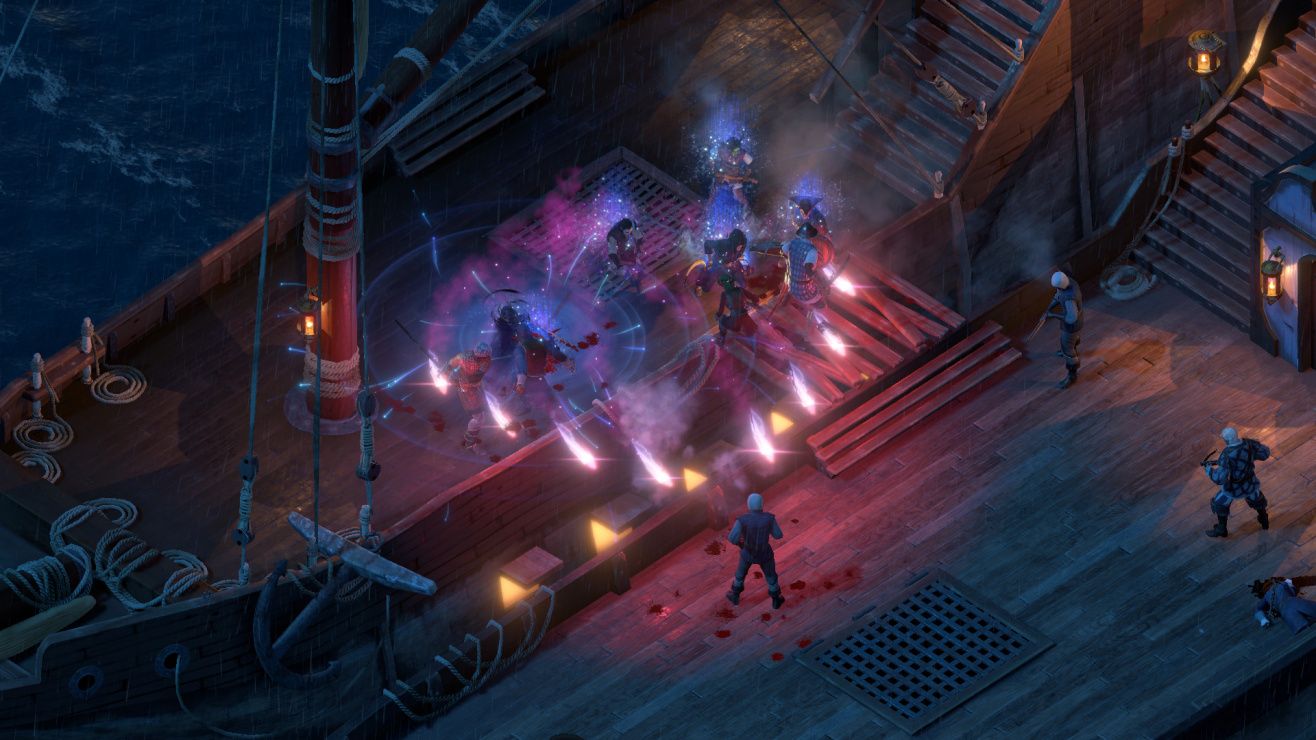 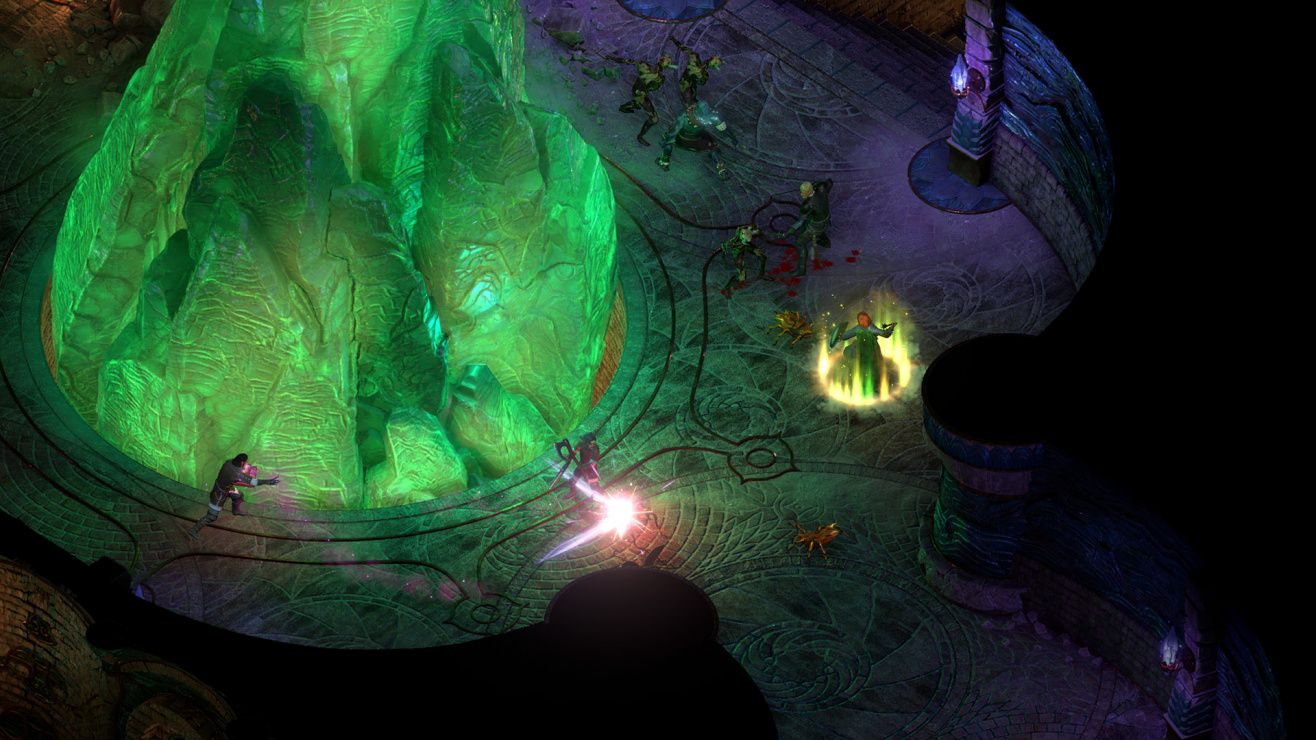 PC Steam Console Playstation Xbox rpg story fantasy role-playing magic isometric party
Pursue a rogue god over land and sea in the sequel to the multi-award-winning RPG Pillars of Eternity. Captain your ship on a dangerous voyage of discovery across the vast unexplored archipelago region of the Deadfire. Bend the world to your will, as you explore the depths of infinite possibilities, including detailed character customization, total freedom of exploration, and more meaningful choices at every turn. • Immerse yourself in a deeper single player RPG game experience - enriched with cutting edge technology and features, Deadfire builds on the foundation of classic D&D gameplay with vastly improved graphics, deeper game mechanics and a whole new hand-crafted adventure where choices truly matter. • Discover the new region of the Deadfire – plot your own course by ship and explore the rich and exotic islands of the archipelago region, discovering new places interacting with their inhabitants and engaging in a variety of quests at every port.
Share Share Share
Promote for 50G

As a woman in my 60ies it was fun to become a pirate, I felt like a less annoying Keira Knightley sailing about with Johnny Depp. This game was harder than the first but once again I did great and kicked its butt. I can beat everyone, I've still got it.

I actually had some issues playing this game as I found a bug that would not let me continue past a certain point do to the order I did some things in. However, I emailed the company and let them know about the issue and I was happy at the level of attention I recieved about the problem. After about two weeks and various emails back and forth, the bug was fixed and I got to complete the game. Overall great customer service and even though I had a problem, they fixed it, and I enjoyed the game too.

Put simply, PoE:Deadfire is a vastly improved sequel to the original Pillars of Eternity, featuring massively expanded class options, hefty replay value, and an optional turn-based combat system alongside its active one. Despite its good points, however, the game is noticeably less polished than its predecessor (downright broken in some areas) removes the castle management, and reduces the party size by one. It also sold so poorly that it nearly killed Obsidian and gave poor J.E. Sawyer an existential crisis.
But you don't care about that, do you?
You want to know if this fantasy RPG lets you run roughshod over the seas as a pirate, going on pirate adventures with pirate ship battles in search of pirate treasure. You want know if you can date hot merpeople, sentient swords, and nerdy elf vampires. You want to know if you can cave in an ogre's face with a psychically-augmented blunderbuss. You want to know if you can ambush a viking longship full of fire giants with your lovingly-customized galleon's arsenal of double-barrel cannons manned by a freakish assortment of collected NPCs taken from the warring factions you've played against one another, desperate to finish the fight before being overtaken by an apocalyptic storm keeping you away from a safe harbor where you can finally restock your food supply.
Hell yes, you can.

Pillars of Eternity II Deadfire, is the first CRPG i ever finished and i loved it. I respect Obsidian's work having played Fallout New Vegas and The Outer Worlds. So here is a quick version of what i loved and hated while playing this game.
---PROS---
Well writen dialogue and Characters
Eder and Aloth
Side Quests
You have a ship and you can explore the map however you like.
The factions of this game is probably one of its strongest points.
Music in the Taverns.
Neketaka.
RTwP gameplay is awesome, and generally the whole game gameplay wise is one of the best i ever played. Mutliclass system adds a lot to the replayability of the game.
Main Story
Turn Based Combat Mode, for those who cant play RTwP.
The Whole Universe and Lore of Eora, shows how talented Obsidian guys are.
Full Voice Acting, which adds a lot to the game.
---CONS---
The main story although it is really good, its really short.
Companion Quests, i expected them to do much better because they have the potential, it was a major letdown.
Awful Performance, i dont know if it is their fault or the engine's but that kind of perfomance is unacceptable.
Before i conclude my review, i want to add a little info about the DLC's of the game.
If you are a person that invests more into story the order is like this Beast of Winter>Forgotten Sanctum>SSS
If you love the combat system more SSS is a really good DLC.
And if you love both equal all of the DLC's are great.
POE II Deadfire is one of the best RPG's i have ever played, even if you are not into CRPG's you should give this game a chance it is really great storywise and combat wise. You dont have to miss a masterpiece like that, i would totally recommend it.
My playthrough lasted 71 hours(including DLC and their side quests) and i did almost everything, the only thing i did not tried at all was the superbosses.

One of the best RPGs you will play, no doubt.
I couldn't finish PoE 1 due to RtwP and immense text that it had and I don't regret it. This game however is fully voiced, I mean every freaking line, and is done so well it's actually fascinating. There are big names that does the voice acting like Laura Bailey, Ashley Johnson, Matthew Mercer and countless other ones. You will be amazed and in for a treat.
Every decision matters. You will face the consequences of your choices and thus, choices have their own weight on your shoulders. That's why it's so immersive and made me play more than 160 hours without ever getting bored. Needed to do some lore refreshing to understand the motives of the Gods but it's easy to get into. Sailing around Deadfire, creating your own ship and crew, being able to choose the factions, chasing bounties and firing your cannons to other ships made the game a unique experience for me. You sail from island to island to create your own story and it is a wonderful idea. I wished the level cap was a little bit higher though as if you explored every part of the map, you will reach level 20 easily and won't gain a new level/ability etc. nearly 30% of the game. Mods increase the level cap from 20 to 33 but I didn't want to intervene.
DLCs in the game are fantastic as well, apart from one. Beast of Winter introduces a well made zone and character like Ydwin, plus the story behind it makes the main story more interesting. Seeker, Slayer, Survivor is the second DLC and focused around arena style combat and it's immensely boring. Boy, I cannot describe how boring it was as I decreased the difficulty to Story and breezed through fights so that they end more quickly. Utterly a pointless DLC that I wished I never experienced. The last one, however, is a spectacular DLC called The Forgotten Sanctum. It's mysterious and really intriguing with another connection to main story. I suggest you complete all DLCs before starting your last quest as they're filling the blanks, not adding more story to the ending. Also, last DLC adds 4 megabosses to the game that will literally destroy you. I certainly couldn't even stand the difficulty and killed all of them in Story mode while still struggling. No shame. :)
Initally wasn't planning on playing this game as well, however, they added Turn Based mode and it changed everything entirely. I mean the game basically become a different game and I think from now on, RtwP and Turn Based modes should be proposed to players no matter what. Each style has its advantages though. RtwP requires more awareness and certainly much much faster than Turn Based. Since the game initally created with the idea of RtwP, there are a lot of filler fights that becomes an instant chore on Turn Based. You can understand it from my playtime as well since some fights, which might have been a breeze with RtwP, takes nearly 30 minutes. Obsidian doesn't allow changing the modes in-game like Pathfinder does, so you need to use a console command to force the change if you want the RtwP mode back. They don't guarantee that you won't encounter any bugs, however it's better than nothing. Shame that I learned that 1 hour before the ending. Just write "SetTacticalMode Disabled" if you want RtwP back and "SetTacticalMode RoundBased" if you want it to be Turn Based. Easy for filler fights.
Also, as a completionist, I was happy to see the game's achievement system is built upon exploration, quests and easy collectibles. I wish every game developer approached completionism from this aspect since it makes you to explore and see the effort developers put. Easy and fun to achieve.
Game still has its problems though. Engine makes the performance complete shit and you feel it from the start. There's a huge stutter nearly every 10-16 seconds, memory leak problems and huge FPS drops due to CPU utilization. Basically if you have an older system, the game somehow works better. :) My rig is 9900K/RTX 3080 and couldn't get more than 80FPS in average. People report that it works better with older CPUs.
At the end, you get a summary of what you did in the game, the ramifications of your choices (which 100% changed the world and the future) and what happened to your companions. I don't feel ashamed to tell you that it really felt like saying goodbye to your friends and made me teary eyed. That is the result of wonderful voice acting, writing and the experience that the game gives you. Certainly recommended.