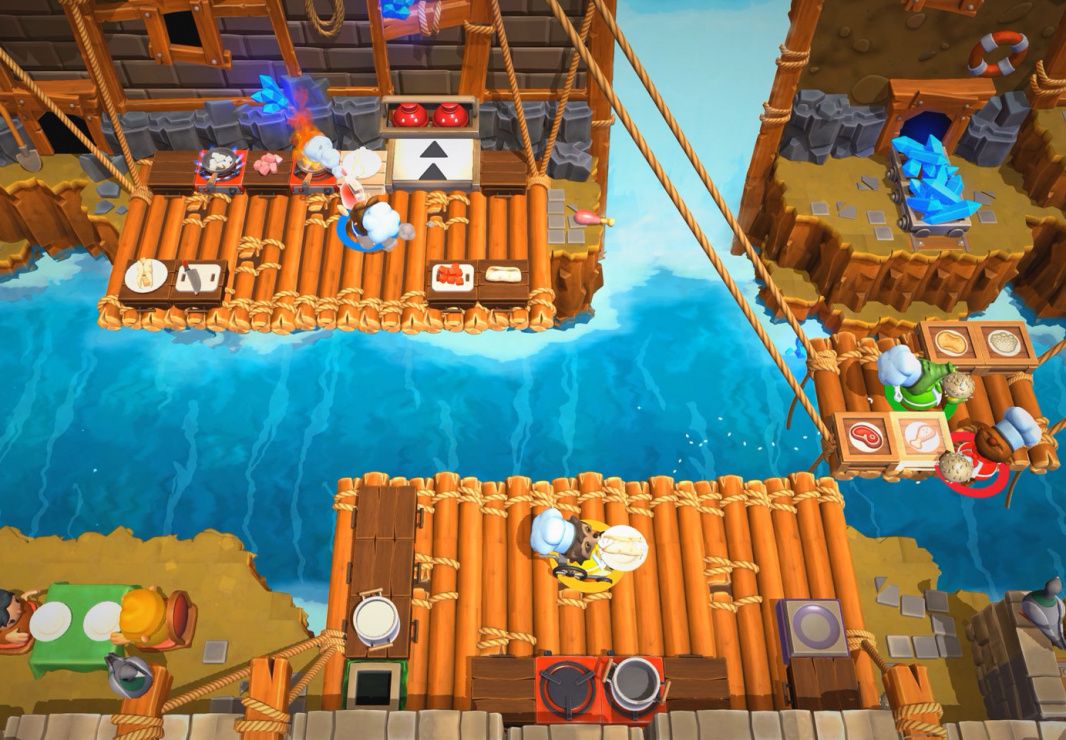 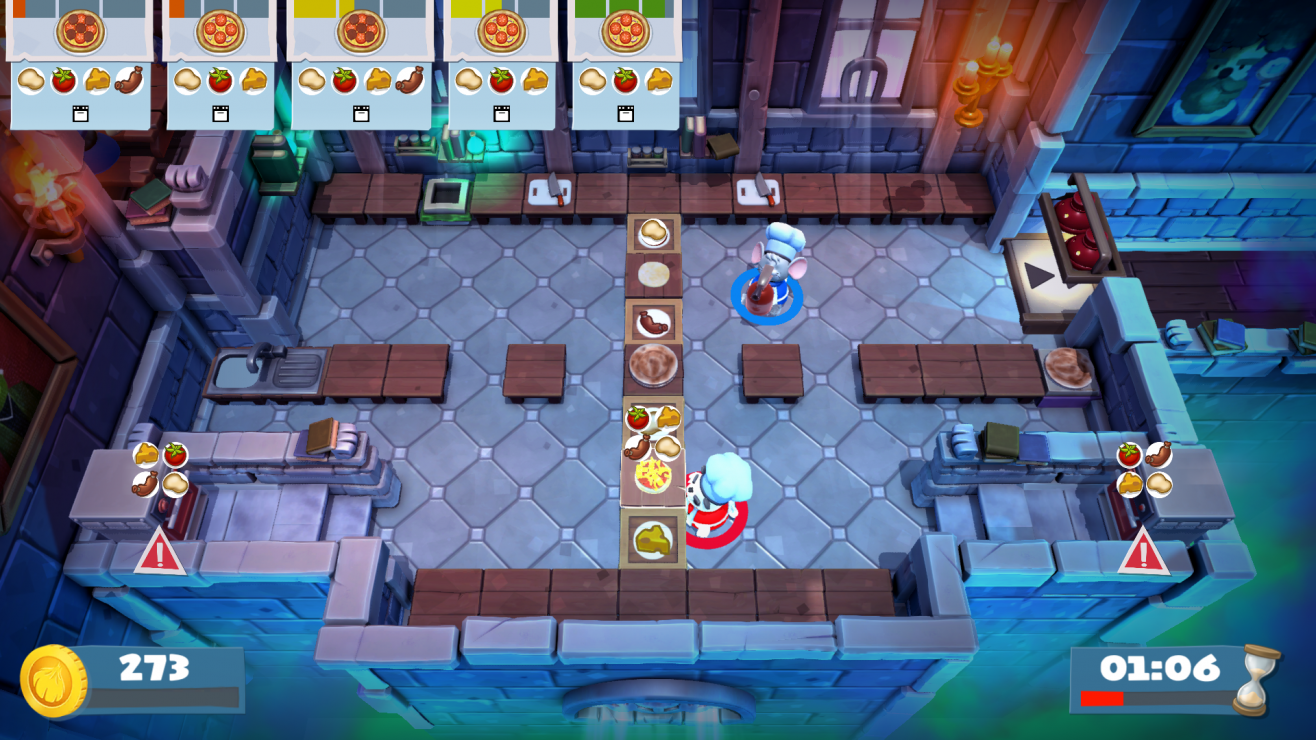 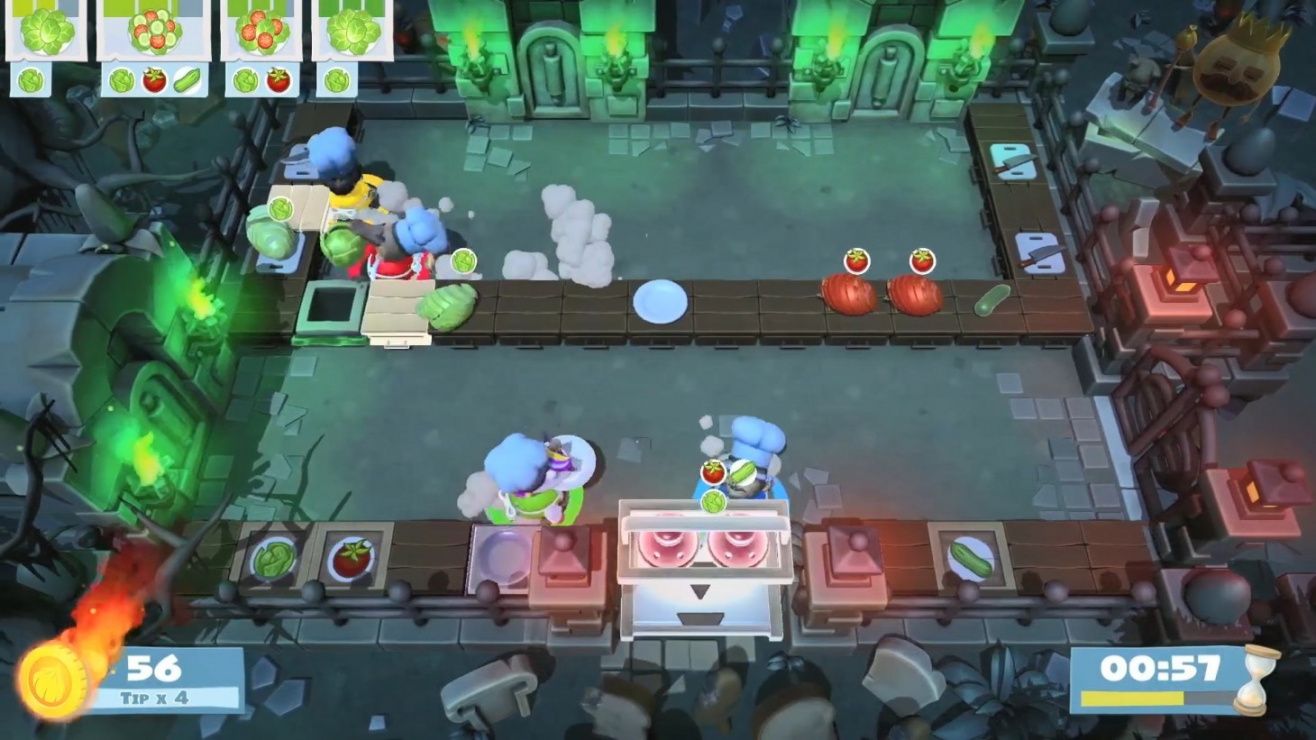 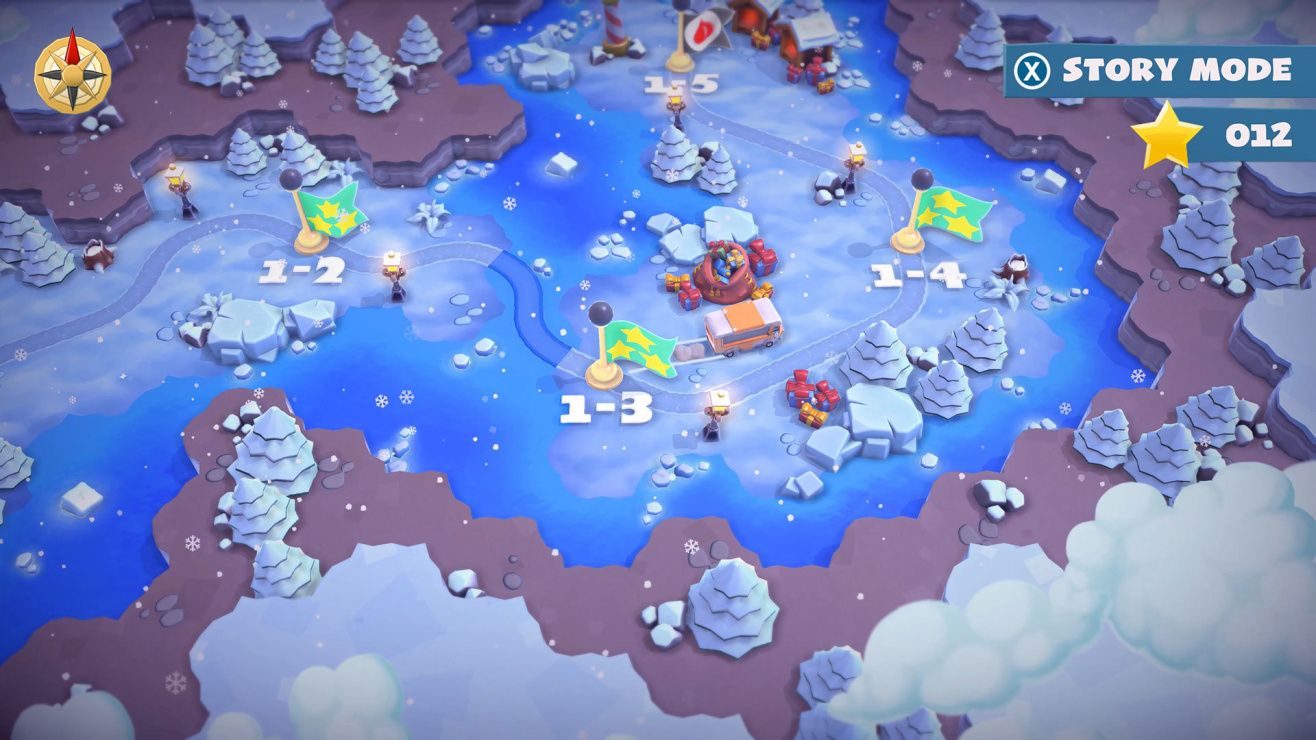 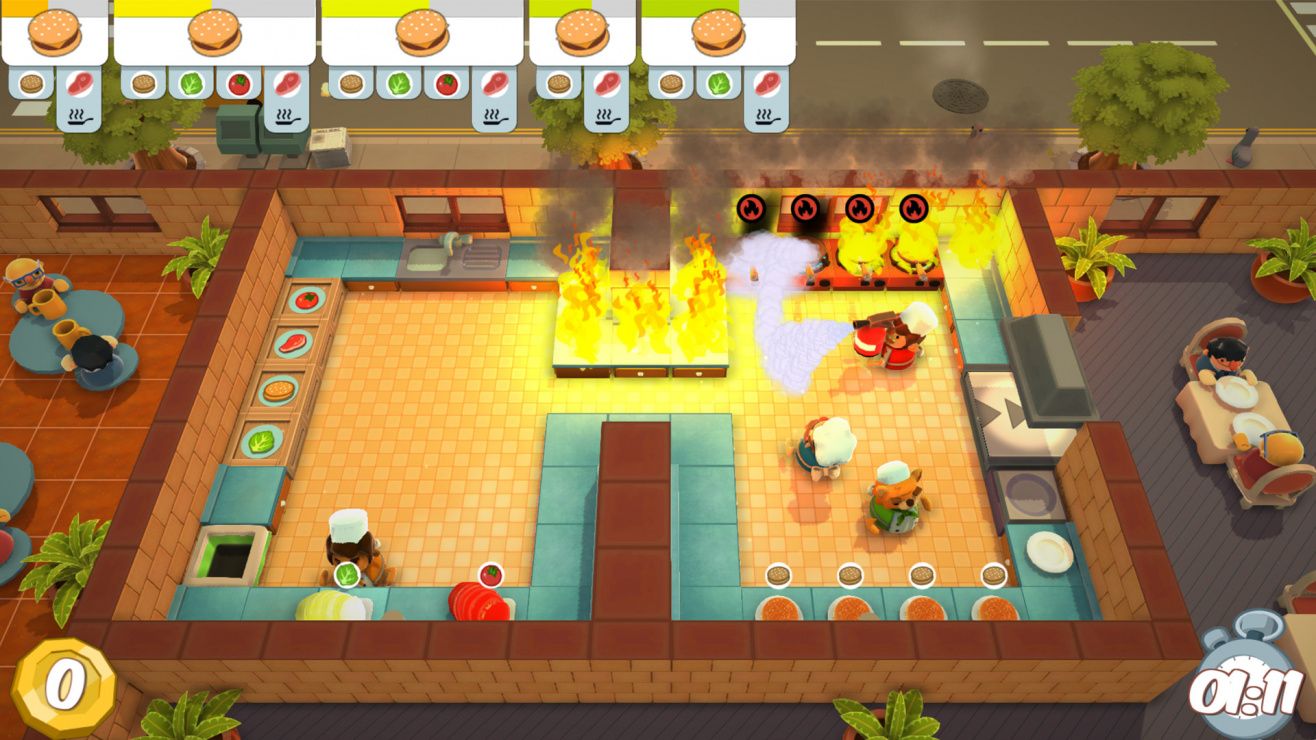 Good game. BUT YOU NEED FRIENDS TO PLAY THIS. MAKE SURE YOU HAVE SOME BEFORE PURCHASING THE GAME.

it made my girlfriend cry

Given how much I enjoyed Overcooked!, there is no way I would miss out on playing Overcooked! 2. Just like the original, 2 is a chaotic party game where you and up to 3 friends work together to serve top-of-the-line dishes while coping with and overcoming terrible kitchen designs, bizarre situations and natural disasters. In sum, frantically fun.
Played with PlayStation 4 controller, and as 2 and 3 player co-op
Positive:
Overcooked! 2 is a fantastically challenging co-op experience but is also a great party game that can be picked up by practically anyone. For the most part the controls are straightforward and the gameplay is quite intuitive but mastery takes time. The story mode offers a great experience with a challenging difficulty curve. Later levels require some mastery and efficient cooperation with your partner(s), so these are probably not appropriate for new players (party setting). However, other game modes, such as Arcade and Versus are more friendly to casual or inexperienced players, allowing for a great party experience. Furthermore, you can play on both keyboard and controller at the same time. It is even possible for two people to share one controller (would not recommend) or keyboard. The developers really thought about making this game as accessible as possible.
Compared to the first game, 2 offers a few extra features that I appreciate:
Finally online play is included! As an additional bonus, your friends don’t even have to own the game as you can use Steam’s Remote Play feature (note: Remote Play can be unreliable at times).
Addition of emotes which can improve co-op communication; though honestly this is only useful if you are playing online with randoms. For the best results you should really communicate with your partner(s) by talking.
You can now throw and catch thrown ingredients! This adds complexity to the co-op experience and can definitely result in mistakes but when done correctly can really speed up the flow of cooking.
A lot of innovation in terms of recipes, cooking methods, level design and gimmicks. While I can’t say I enjoyed all these features, it is clear that the developers put a lot of thought and effort into keeping the game innovative and exciting. I especially enjoyed the zombie horde levels where you essentially have to keep your fort intact (use money to repair) and drive zombies away by serving their requested dishes. It’s an unexpected but entertaining fusion between CoD zombies and Overcooked!
Neutral:
Despite the recurring NPCs (Onion King and Kevin) and similar quirky humor, I did not particularly enjoy the story. I can’t pinpoint exactly what went wrong but the Rise of the Unbread (+1 for creativity) felt more like an afterthought than the driver of the adventure. You could say the story is bland (づ￣ ³￣)づ.
The main game is not very long (~7 hours) yet there are 4 paid DLCs available. So far I have only played 2/4 DLCs and while they are fun, not a lot of content is added (~2 hours per DLC). Feels like a cash grab.
Negative:
It seems as if the fun factor was not prioritized when designing some levels; either difficulty or highlighting a specific gimmick were prioritized instead. Sometimes the entertainment value was lost in their attempts to create wacky kitchens, leaving the players with frustrating experiences. Sadly you are still required to do well on these levels, since a certain amount of stars are required to unlock the proceeding levels.
There is one tiny feature that definitely irritated me more than it should. In the overworld, you drive your bus around to select the level you want to play. To reach certain locations, you are sometimes required to activate switches, which will cause a ramp or bridge to rise and allow you to progress. In most cases, the switches are very near the ramp and are in plain view so they are literally pointless. It adds nothing to the gameplay and feels like a waste of time.
My biggest criticism of this game is the New Game + feature for the story mode. During your playthrough, your performance is given a star rating (up to 3) per level. Once you have completed the game it becomes possible to unlock the 4th star. However, once again it doesn’t seem like the developers designed this with fun in mind. Normally, a timer starts when you begin a level and the level ends when timer hits 0. However, for the 4th star, the timer only starts once you serve your first dish.
EDIT:Turns out the information above was incorrect, my apologies.
It is literally impossible to unlock the 4th star by playing the game as intended in levels that introduce a new recipe (timer stopped until first dish served). The only way to reach the threshold for the 4th star is to prepare as many ingredients as possible before serving the first dish. You basically have to farm ingredients to even stand a chance at unlocking the 4th star. This doesn’t require much skill, just the will to go through a lot of tedious preparation.

Verdict:
★★★✬☆ A pleasant dish
Both Overcooked! games are great but I recall enjoying the first game more. The new features introduced in 2 were welcome but sometimes flawed and unnecessary. Somehow the fewer gimmicks and simpler levels (for the most part) in 1 made for a more fun experience. Regardless, I enjoyed Overcooked! 2 as a whole; it is still the chaotically fun co-op experience that I’ve come to expect and love from the Overcooked! Series. Looking forward to 3!
If you found this review helpful, please give it a thumbs up and follow me on my curator page. Thank you for your support!

Imagine Gordon Ramsay's Hell's Kitchen as a game, but with the swearing and yelling and crying IRL.
I cook like Gordon Ramsay and then throw it in the bin.

Fun game to play with girlfriend

Hey, this seems like a chill game me and my friends game, and my friends recommend it for me! gonna be fun
>I get it
>Finish tutorial
>invite friends
>start screaming
>shouting
>sweating
>wanting to kill them
well i can say it's a really good game honestly, highly recommend!