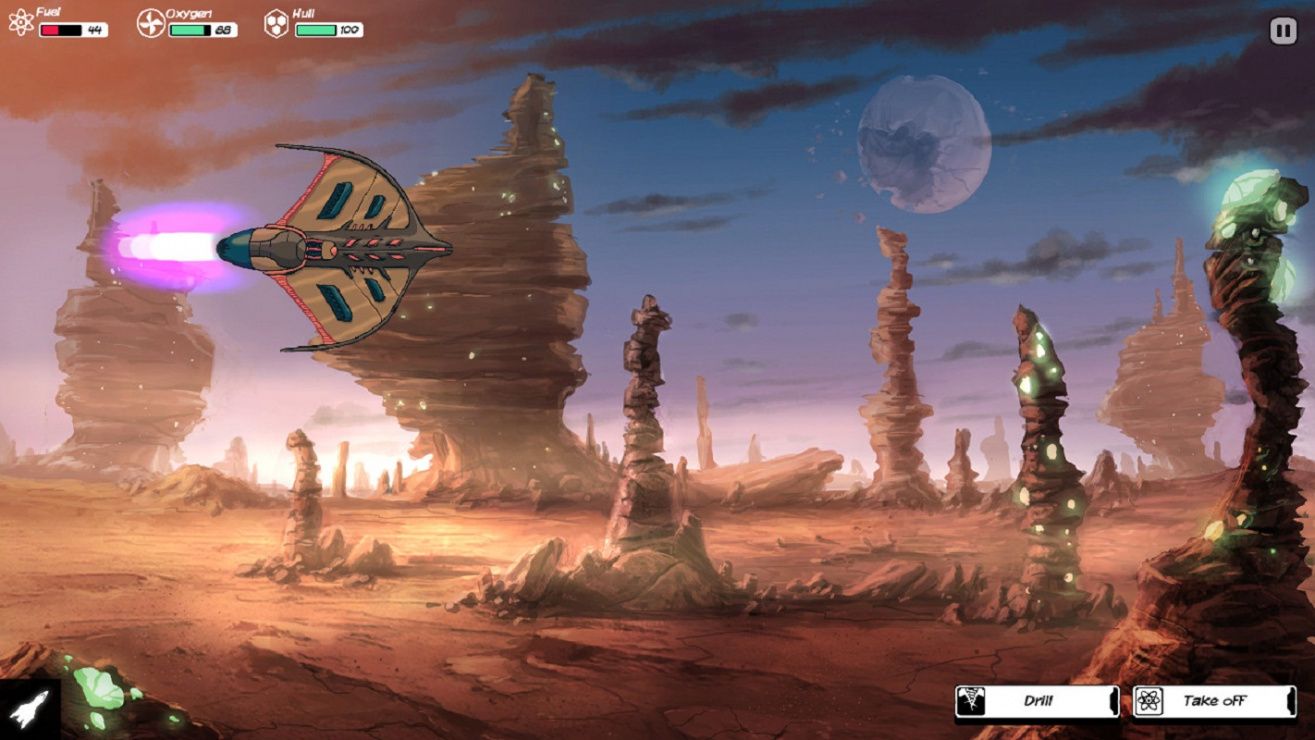 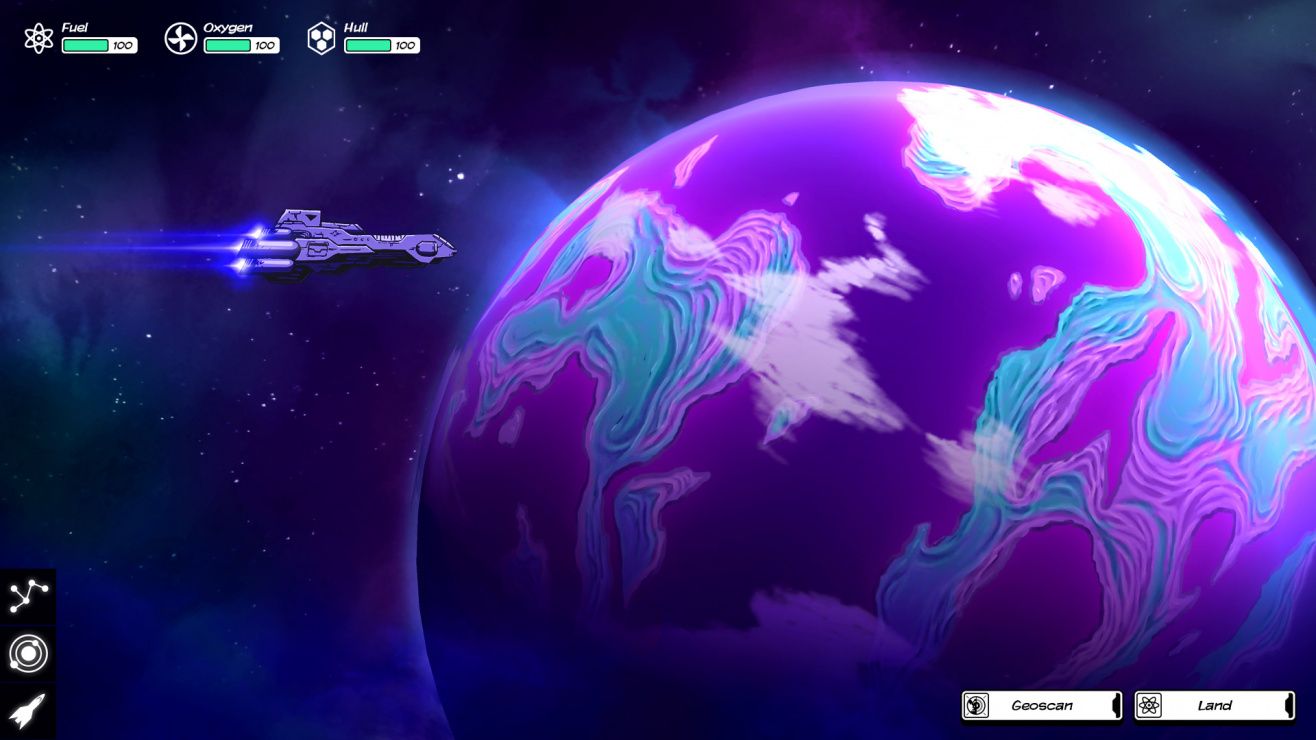 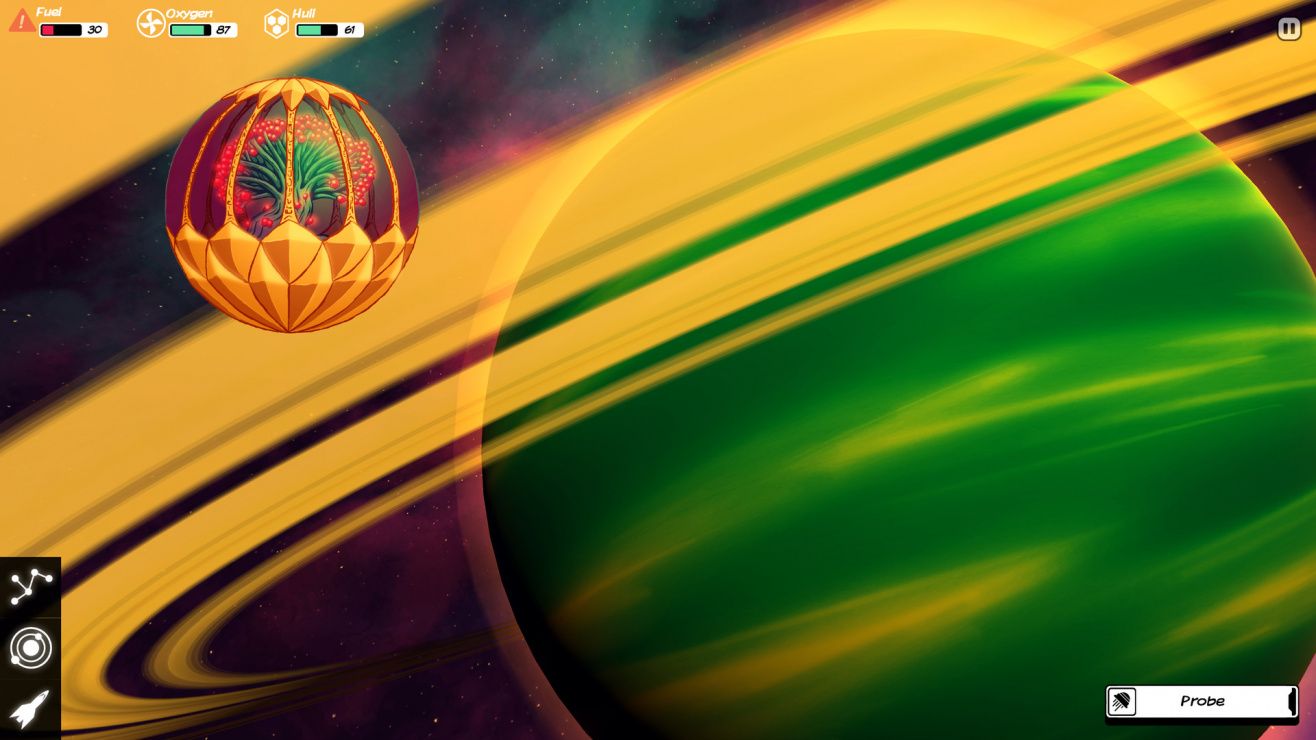 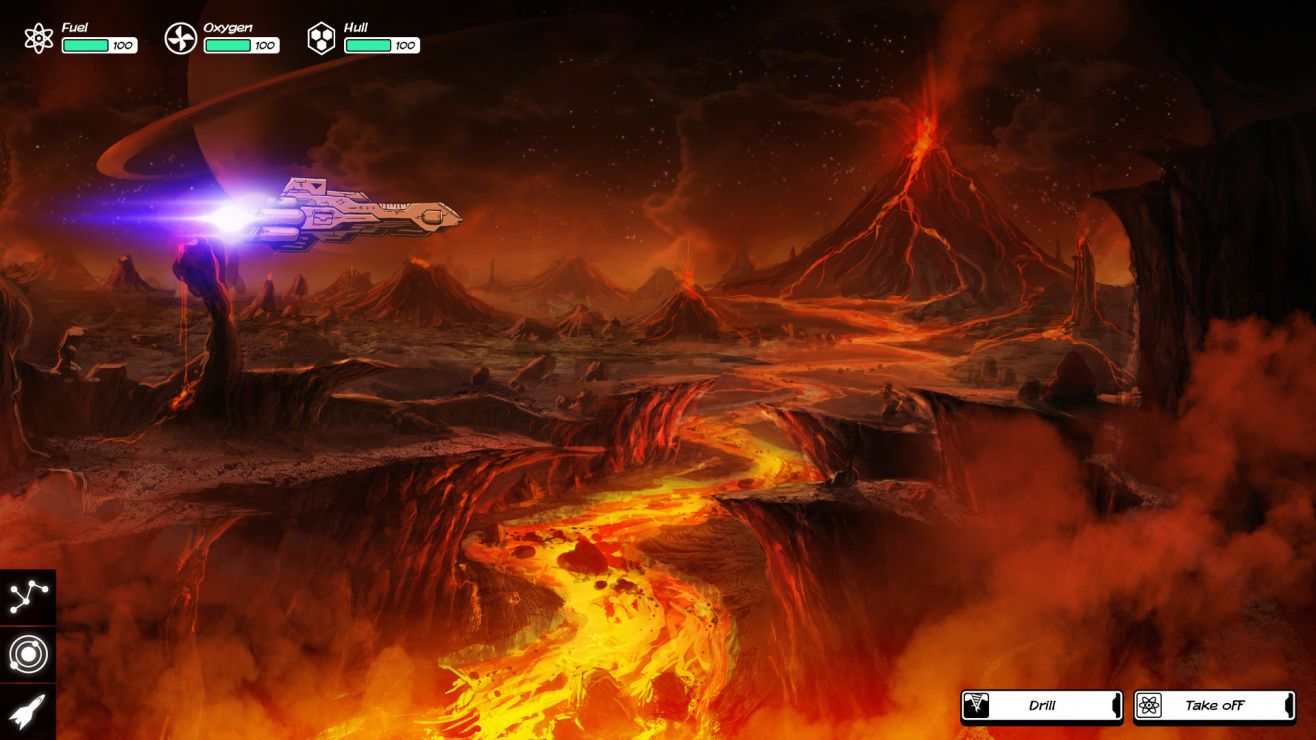 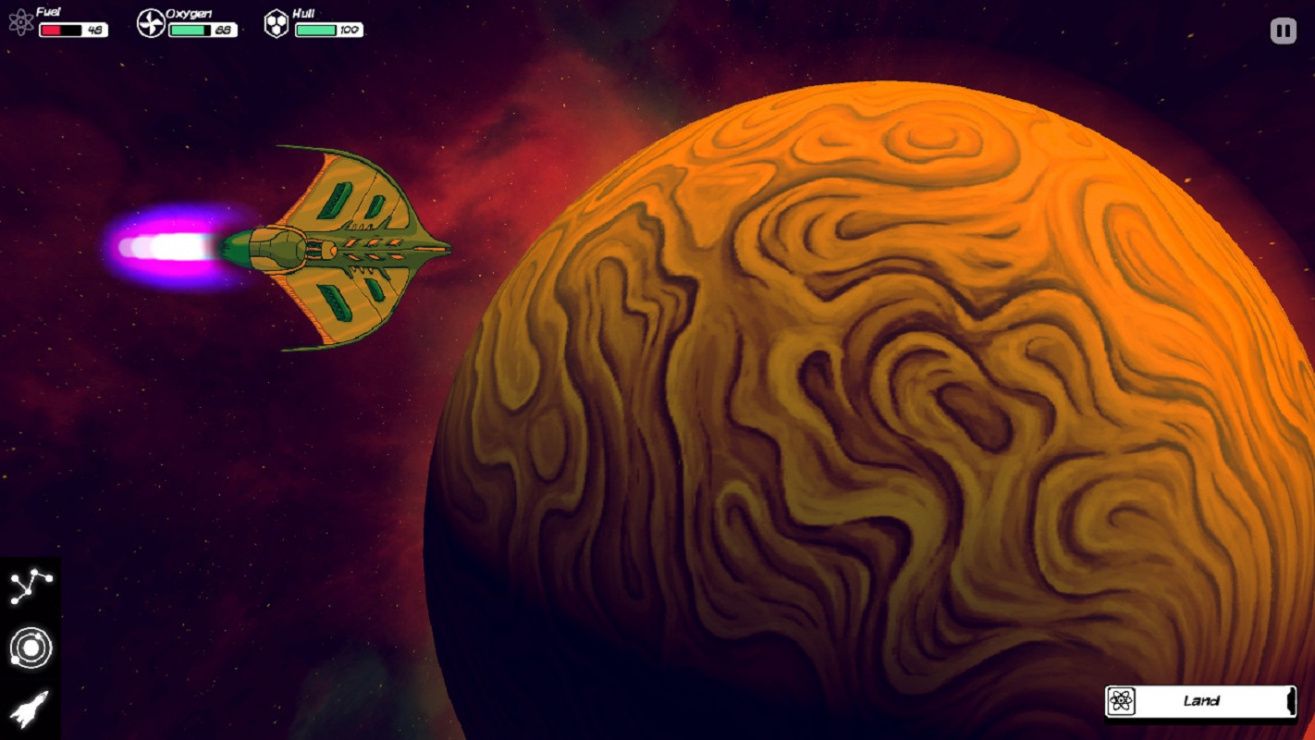 adventure indie rogue-like rpg sci-fi space strategy
Out There is an award-winning space exploration game blending roguelike, resource management and interactive fiction. You are an astronaut awaking from cryonics not in the solar system, but... out there... in a far and unknown place of the galaxy. In Out There, you will have to survive, tinkering your ship with what you can gather drifting in the void, and spot garden planets to refill your oxygen supply. Space is an hostile place ; dangerous and mysterious adventures will mark each step of your travel. You will not only meet intelligent species that won’t care about you, but also deal with ancient powers linked to your destiny and the fate of mankind itself. Survival and understanding of what is really at stake in the galaxy is the core of what Out There has to offer.
Share Share Share
Promote for 50G

A lot of reviews focus on the fact that bad luck can make you lose this game no matter what, and this is indeed true. However, I don't think it's fair to say that that's all there is to it. By stockpiling the right resources, strategically visiting some systems and not others, installing the right kinds of equipment, you can drastically improve your chances. The game does very little hand-holding, so you'll have to figure these things out by dying a number of times in unfortunate ways, but personally that doesn't bother me too much.
The only thing that I'd like to see added to this game is custom markers that you can put on systems.

If you're not looking to play a more involved game or want something to click on while playing YouTube in the background, this is a great game.

This game is at its core designed for a touch screen, so none of the mechanics are really that involved and the runs feel like they're made to kill time instead of challenge the player. There's a lot of RNG so it isn't really obvious what the best choices will be, especially for new players.
Nonetheless, it's still fun for a while every now and then, and the gameplay elements you do work with can be interesting to adapt to.

Winning or losing is totally based on the random results you get, but the story is always interesting and evocative.

Whilst the game banks a lot on luck, many of the problems can be circumvented by always thinking about the worst possible situation and planning wayyy in advance. The community is active and there are plenty of extremely helpful guides available. If you're someone who likes a bit of pain and the satisfaction that comes with a fully completed run, then this is for you

This game has a reasonably steep learning curve. With a bit of research about the likely composition of different star systems, and figuring out ways of maximising my cargo load - I finally managed to start making some decent headway.
I had an awesome ship, an array of different technologies at my disposal and was on my way to completing my first mission.
I built myself a "Wormhole Generator" - which turns black hole systems into shortcuts to other black holes. All at the cost of 1 "Omega". The games ultimate resource. Once I had take a travelled a few wormholes - I arrived at the "Blue" mission system.
This was the homeworld of the "Enemy People" and I was the arbiter of their doom. I planted the "Death Seed" into their home system's sun and enjoyed my first victory on Out There!
Only three more campaigns to complete. I wonder what is in store for me...
I highly recommend this game if you like FTL. It doesn't have the action - but it definitely has soul.

This is a rouge-like travel game. The narrative conceit is that you've overslept in your cryogenic coffin travelling from Earth to Jupiter, and are now lost in space. Fortunately, some aliens give you a new technology --- the Manifold Something-or-another --- which allows you to travel between the stars more quickly. Your ultimate goal is to get back to Earth, though in terms of plot I wonder if Earth is even still inhabited by homo sapiens given we don't really know how long you've been asleep.
Almost every time you do something, you consume resources. Resources seem to be elements (e.g., O, Fe, Pt), and if nothing else you'll remember your Periodic Table of the Elements after playing a few hours of this. Each ship requires fuel, oxygen and hull materials. Different engines consume different kinds of fuel. You can also build new technologies, but have only so much room in the hull of your ship, barring a particular technology which expands your hold size (but I can't recall its name). These technologies will grant some source of advantage, usually in terms of revealing more about your environment or reducing the speed with which your ship consumes resources.
Each solar system contains either a star or a black hole (or maybe quasars, too, but I didn't go to that start system when I saw it). I've seen red dwarves, yellow dwarves, blue dwarves, though I can't tell if star type influences the number or kinds of planets in that system. Each system can contain any combination of a space station, wreck, garden world, mineral-rich world, or gas giant. Unlike any other item in the game, the space station will refill O2, fuel or hull to 100% repeatedly. However, it will only refill one of these kinds of resources. Planets produce resources, assuming you have the appropriate tech, but at a diminishing rate of return. Thus, returning to an already-visited world will not greet the player with a rejuvenated world, but instead at the resource level you left it at before you skeedaddled. The only exception to this is oxygen at garden worlds, which refills your O2 tanks. Garden worlds also contain intelligent aliens who might trade with you.
Aesthetically, the game employs a minimalist, comic-book-like cut scenes whenever something weird happens. Music is ok.
I've put in a few hours at the time of writing this, and it is enjoyable in short bursts. RNGesus will sometimes smile upon, and other times crucify you. Once I misjumped and end up in a cluster of stars which were not close enough to other stars so I was stuck. Occasionally I've found a better ship (i.e., more storage and better technology). If you run out of resources, you might still move, but the game will probably end.
Currently I am annoyed with the game, as I've just died for probably the 10th time in an hour or so. However, it is a rouge-like, so what did I expect? Anyway, I recommend the game, especially on sale.
ps None of the game guides are current, as in 2019 it was reconfigured for the Twitch, which added new content.