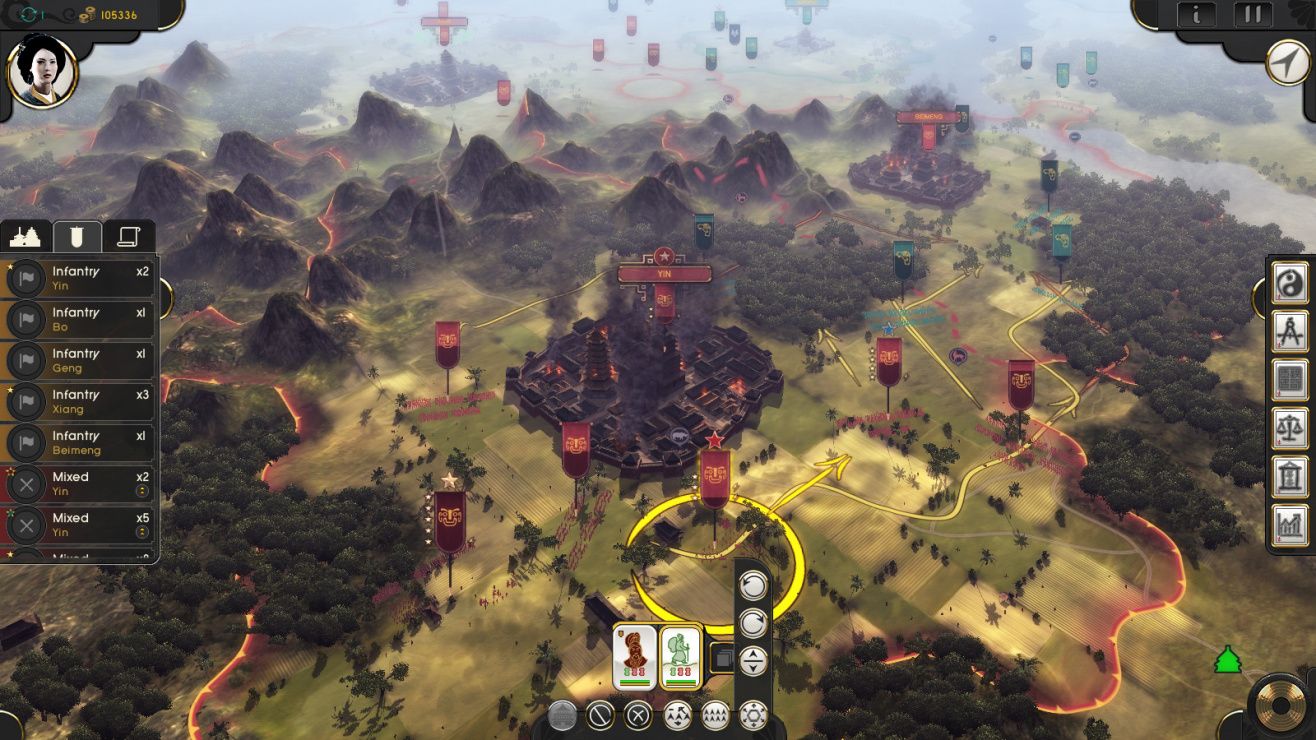 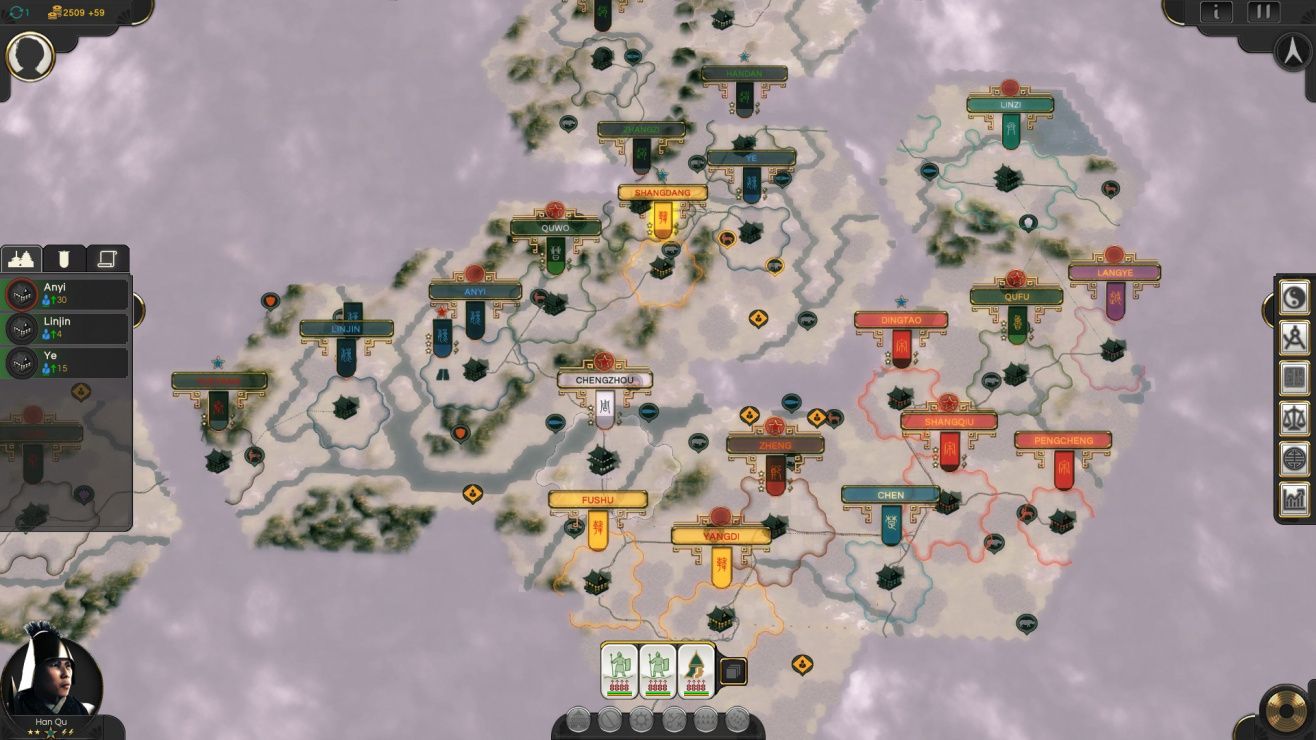 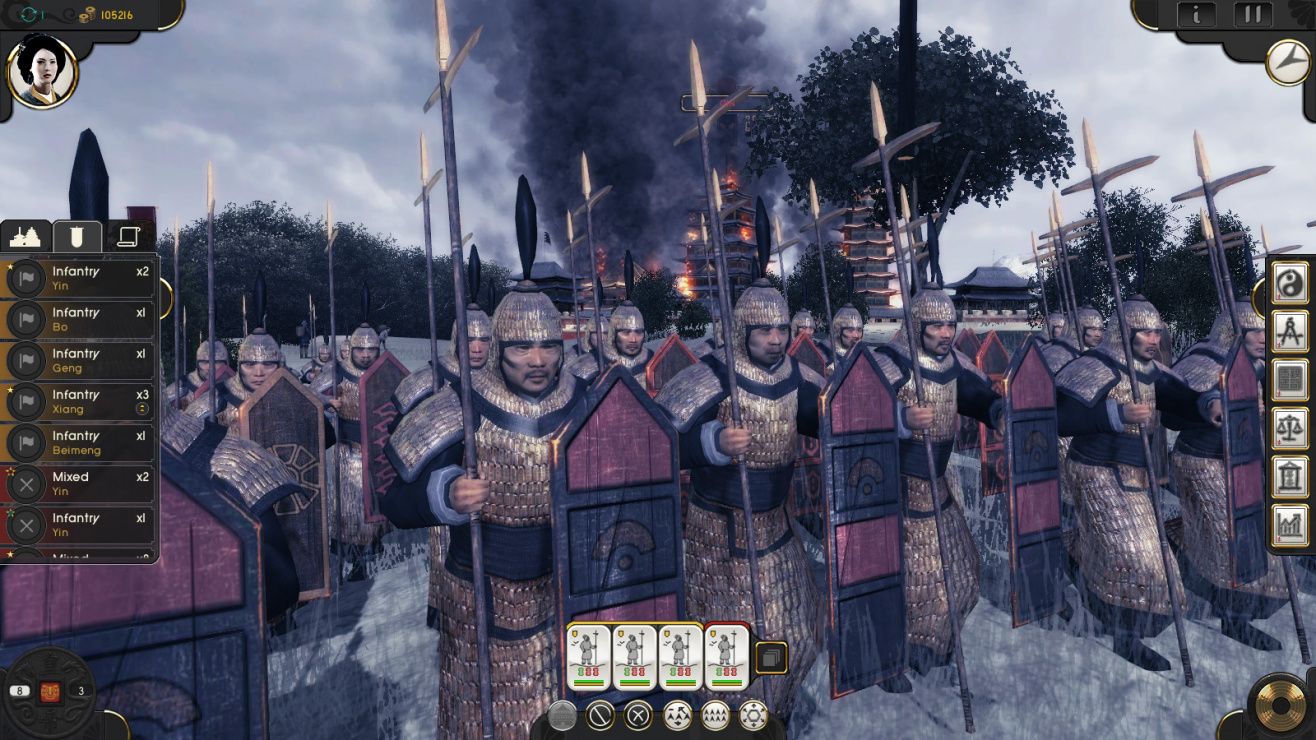 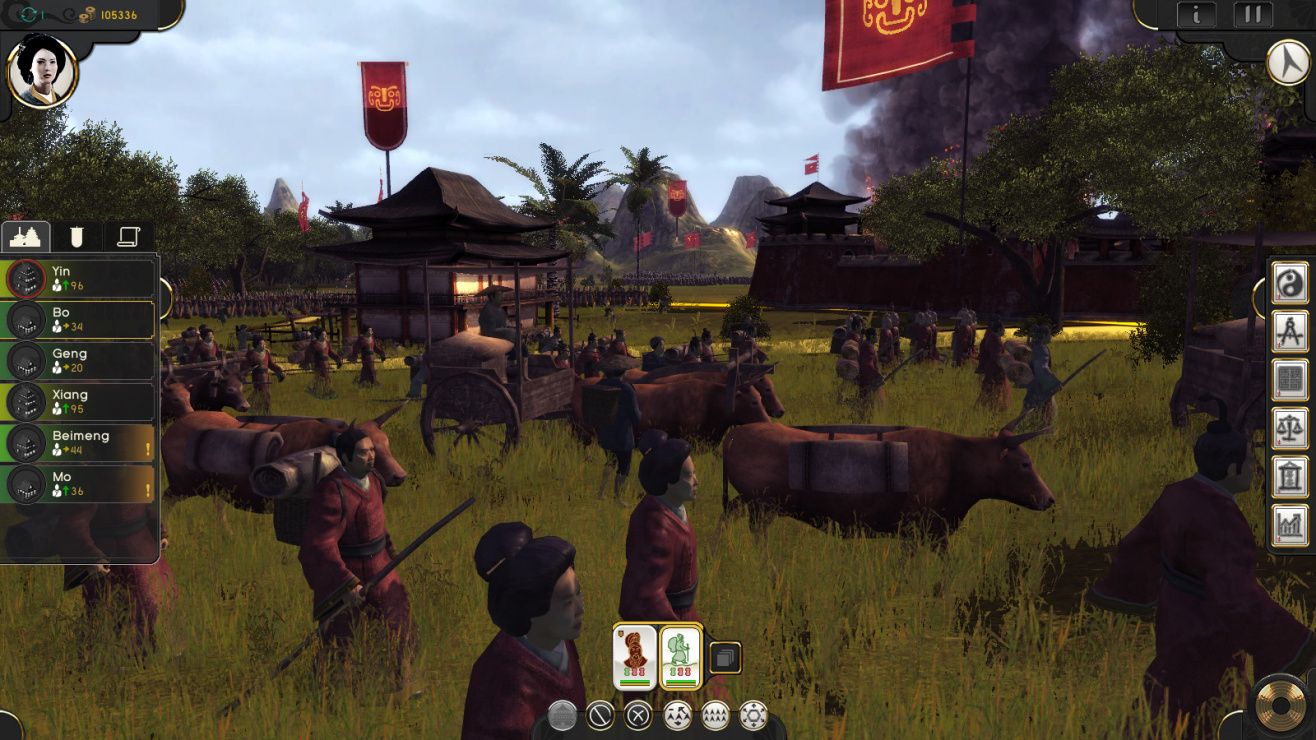 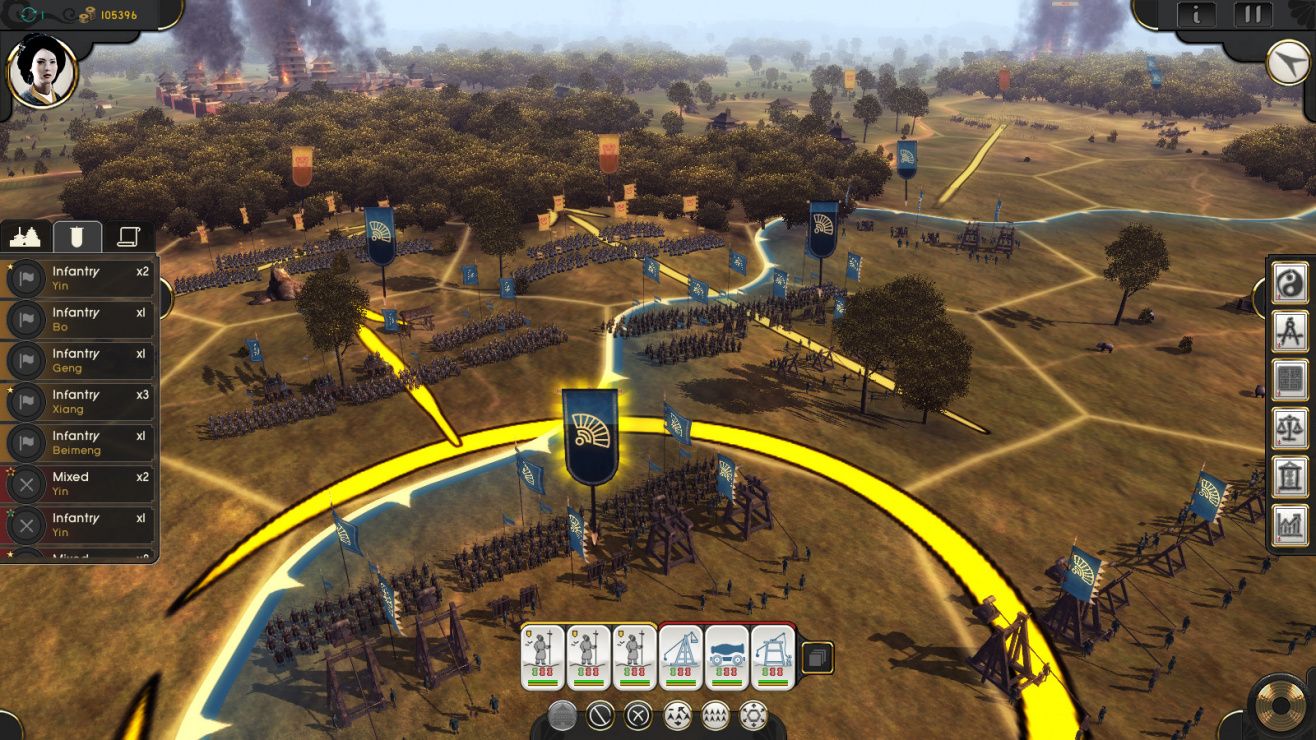 co-op indie medieval multiplayer simulation strategy turn-based war
Step into the world of the ancient Orient. Control a city or tribe from the dawn of Chinese history, and turn it into a great empire. Develop your land, create great cities, raise huge armies and fight epic wars. Advance your technology, culture and religion to create one of mankind’s great civilizations. All the action takes place on one spectacular game map that brings to life the mountains, forests, plains and deserts of China. Zoom in close to review your troops and see your peasants toiling, or zoom out for a strategic overview. Plan your battles, end your turn, and then watch as your armies obey your orders, with hundreds of soldiers battling right on the game map. Start out as a single nation or tribe, starting from humble beginnings with a single settlement and expand your empire and develop your culture with the aim of becoming the universally recognized Son of Heaven and ruler of the world.
Share Share Share
Promote for 50G

I'm very pleased with this game; Iceburg seems to do these sorts of games well. It's a 4x, but veers away from the standard template in a few interesting ways.
The first is that the movement and combat phase happens simultaniously. Its an interesting change of pace, and it means you might stumble into a battle you didnt want, or find yourself chasing bandits rather than eradicating the lawless scum like they deserve.
City placement is restricted - and it took a little getting used to. You cant place cities wherever you like - too close to a river, not enough space, too damn many trees. It means you might find yourself with a settler that has no place to go, or waiting for your peasants to clear space for a city to be built. That's tricky, since the game starts just prior to the Bronze Age, and you might find yourself unable to grow because you cant clear the vast jungles of southern China.
You arent restricted to resource deveopment within your borders, however. That's a nice change, and necessary, because that jade sitting in the middle of a mountain range might not be particularly close to where a city can be founded.
Mostly, though, I like it because it feels very much like a historical sim. This feels like the rise of small kingdoms within China, the map stresses the importance of rivers, the tech tree not only feels like technological advancement, but advancement through the cultural and philosophical ideas of China. There's a nice mechanism within the tech that simulates decadence - if you cant afford the edict to advance to a new age, your society stagnates.
All in all, I'm very pleased. I havent seen any glitches, the graphics are smooth and not overly taxing on my GPU, the UI takes a little getting used to, but does give me the information I need. The shift in perspective is particularly nice - you can go from a bird's eye strategic view of the explored world right down to the lowly peasants tilling the fields.
Unreserved thumbs up.

Interesting strategy game. Not exactly like Total War. In that you control your battles. You just pick some general formations if you want. Long before any battle. Then you can zoom to watch the action. You are playing to do all the strategy on a larger scale. Which is not too complicated. I enjoy playing the game.

One of my favourite strat game ever, and I've been playing this genre since Civ2 days. The general oriental theme, may most people off, however the general game design and excellent mechanics is more than enough to overcome that.
Making a brief comparison with the latest iteration of the Civ series: I really wanted to like civ6, but I find myself unable to continue after a few hours, I gathered that while it revamps a lot of key aspects of the genre, it is a superficial fluff, but really no depth, whereas most things seem disconnect from other features, no need for management whatsoever, a convoluted click fest that does not amount to anything essential.
This game on the other hand, is one very crude, there isn't a lot of fluff, no wonders or several different civilizations, but its goes really deep in its mechanics, and they all fit in perfectly:
* combat is a thing of wonder, unit composition and formation matters; a true sight to behold when several stacks of trained units meet in the field, or when siegeing a very fortified city; as such it's one of the hardest tactical combat 4x games to master, and with the simultaneous turns, very satisfying to play in multiplayer.
* city and empire management, seems to be very shallow at first, only farms and few things to build, but in reality management is a real challenge in this game, everything has its upkeep, so you should only build what its needed at the right time; floods, disasters and famine, or even your rule dying, can quickly switch things up, cutting your profit and potentially ensuing a large revolution on your hands.
* And finally trading and culture, its something that seems underkey at first but plays such a large role in the overall scope; trading requires a lot of foreplaning and thought, but very little microing, which is excellent design; cultural buildings, while seemingly pointless at first, can be a potential winning condition, plays a role in happiness, and greatly improves your export trading profits.
* The overall scope and progression of the game is also superb, as an example the main campaign map, is huge and very detailed, with great expanse plains full of big cities, large mountain ranges with a few gaps in between, and big river connecting it all; there is no breakpoint in the game, but a slow progression building on a solid foundation, and when you see you have a huge empire spamming a whole continent; and the greatest thing is that even that huge scope, there is very little microing to be done, the game makes sure to keep your mind on the big things.
And finally, it has a fully working multiplayer that granted me some of the best strat experiences ever. A strong recommended game for anyone into strategy and traditional 4x, and I hope it gets the attention it deserves.

I believe this game should win the "Labour of Love" Steam Awards because the devs are, not only updating the game constantly, but also, they hear the community, fix bugs, give us good DLCs and the musics are epic. Haha.
Good luck!

Please follow TotalWar:Arena for quality reviews
Oriental Empires Review
At the first glance Oriental Empires might just seem as a Civilization clone, but it is much more than that, much, much more. Oriental Empires is a turn based 4-X strategy game, it was developed by “Shining Pixel” studios and published by Iceberg interactive and was released on September 2017. This game is what you would get if Civilization had baby with Total War.
Oriental Empires is set is medieval China, your aim is to grow in authority and power to ultimately rise-up as the emperor of the world.
The atmosphere in this game does a good job of sending you into the dawn of Chinese history, you start as one of the 24 small factions (of which only 5 are available at beginning) all of whom has different skill sets and abilities.
Art Style
The graphics are quite solid and fluid, there are two modes of view the traditional top down approach and the other is more zoomed in view to see how the towns folk are doing, although the art style are quite appealing, but there is a noticeable lack of diversity, the music and sound design is decent and does a good job on setting the ambiance, but might get a bit repetitive after long time of playing.
Gameplay
You will come across other factions while expanding your nation, sometimes you might be able to take them with brute force, but other times you might need to take more of a diplomatic approach while tackling with the more powerful nations. Authority and happiness of citizens is something that needs to be kept in balance as excess of either of those might lead to problems in your nation.
Unlike in Total war games, you have to pre-plan all of your attacks, the AI takes over once the attack begins. The progression and the management is quite intricate as it needs delicate balancing of various different parts of your nation, and maintaining balance between authority and happiness of your citizens is really important, even if one of the parts fail, the entire nation would be affected by it.
Since the release of this game two more DLC’s have come out, and both of them add to the experience, in addition to new content these DLC’s also provide a few new gameplay elements, and better map design which makes the games overall feel even better.
Conclusion
Oriental Empires has a lot of potential but also has a few bugs which needs to be fixed, the management system is pretty good intricate for the people out there who’d like a bit of challenge, Although it has few problems, Oriental Empires is a game worth trying if you are a fan of turn based strategy games, as it provides a fresh take on the genre.
Rate: 8/10

Yep..it's another great game... if you like this sort of thing....which I do. Only small developers dare to be different these days, and they often get slammed for it from many game players. This game's special feature is it's WEGO turn system, which I think is a lamentably underused mechanism in computer games. I love it. You set your orders, press the button and see what chaos ensues as you and the AI attempt to maneuver your units. It can be frustrating, but it is very challenging, and gratifying when you pull off a maneuver.
Seems we have lots of sparkling games vying for our attention these days. We like games to be slick, easy to learn, user friendly, with a quick reward cycle, followed by easily achieved victory. If rewards are not soon offered up, interest is lost. Which means we can miss out on some real gems. Like this one, for people who can enjoy a slow burning challenge.
I bought it at launch and it was a bit bare bones and repetitive. Coming back to it I was pleasantly surprised by the improvement, the AI players in particular make for interesting opponents. In this regard it far outshines CIV 6 for example, which has abysmal and uninteresting AI opponents. Somebody said buy CIV instead of this.......you'd be missing out. Better to support the small, innovative developers that experiment with new ideas,.

Not sure why recent reviews is mixed. I find it a very interesting game. This game has depth and the pace is just right. I think it lacks a good tutorial and manual. I need to read guides to get explanation to important game mechanics, especially about trade and combat. So this is a game you need to invest time to know its worth. Hope developers can address this issue. Look forwards to their next game.