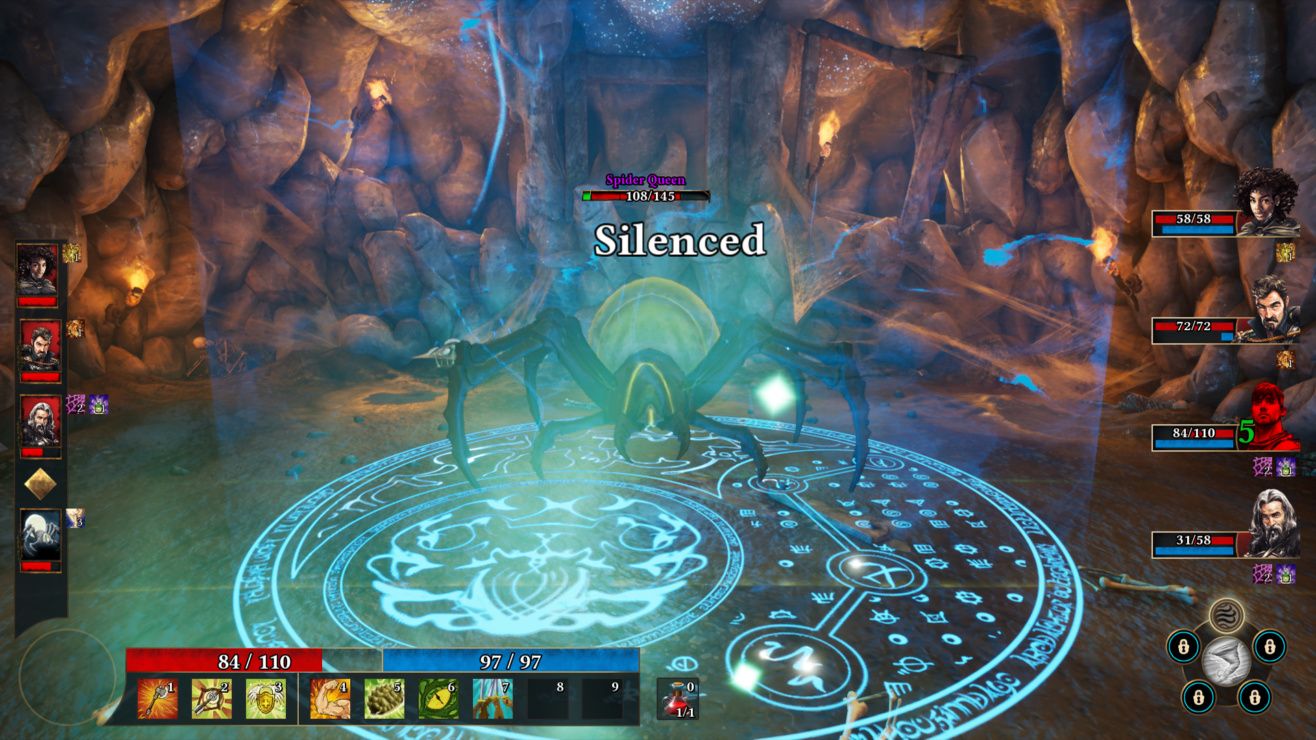 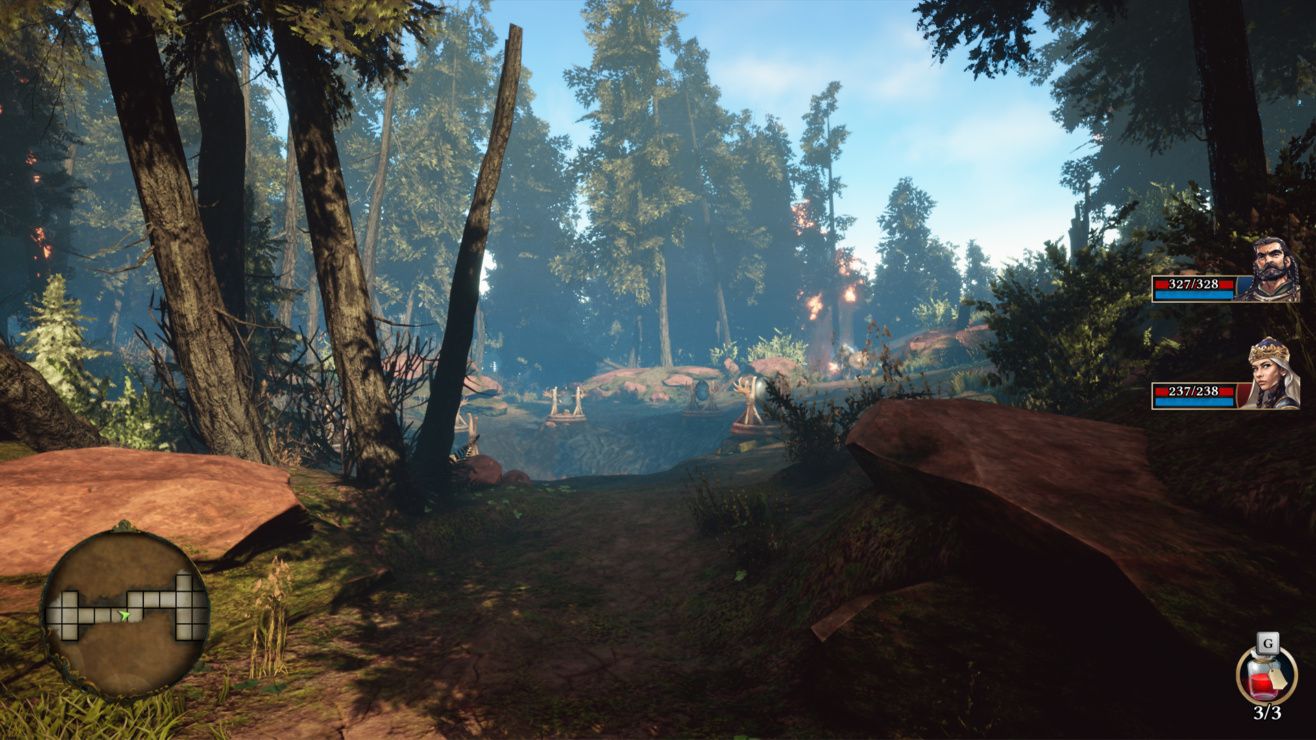 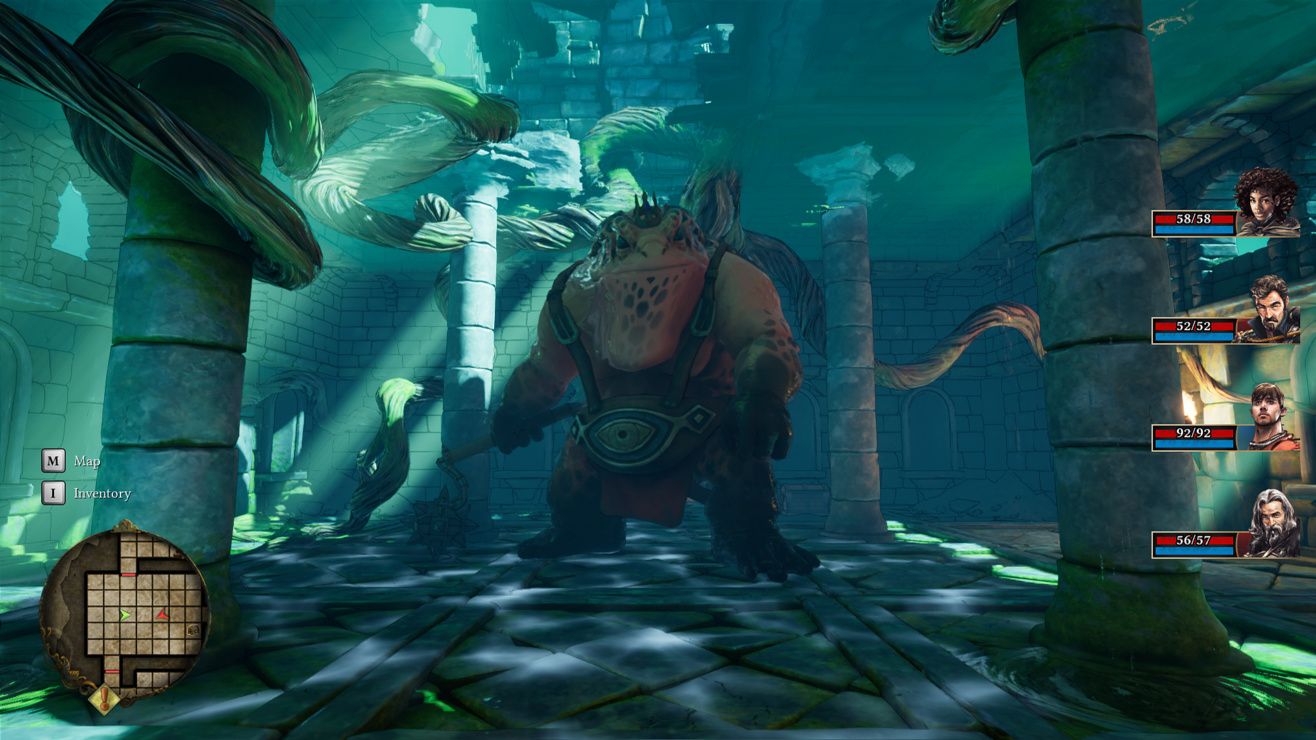 combat crawler dungeon exploration fantasy party puzzle rpg turn-based
Zen Studios’ modern homage to classic first-person dungeon-crawlers takes you to the land of Operencia, an unconventional fantasy world inspired by a faraway land referenced in countless Central European folktales. An old-school turn-based battle system combines with inspiration from unexplored mythology to offer an RPG experience that feels unique yet also familiar. An unknown force has abducted the Sun King Napkiraly, leaving Operencia in a state of perpetual darkness – and eventual doom. From hidden royal tombs and cursed castles to an ascent up the World Tree to reach the Copper Forest of the Land of the Gods, explore diverse settings throughout the far reaches of the land…and beyond. Each location boasts its own unique atmosphere, visual style, level design and puzzles, and many take place entirely outdoors. Operencia is home to an intriguing mix of unexplored mythology and fantastical versions of actual historical locations (e.g., Deva Fortress, Balvanyos) and characters (e.g., Attila, Seven Chieftains of the Magyars), all coming together to form one cohesive new gaming universe. Several of your own seven party members take influence from heroes of forgotten tales told hundreds of years ago, such as the brave knight Mezey and Sebastian the Dragon Slayer.
Share Share Share
Promote for 50G

Operencia is a 1st person dungeon crawler when it comes to gameplay, however there's one major difference between this game and the usual metric of the genre: the focus of the game. where's usualy these games are centered around exploring, combat and progression the main focus is here is clearly the characters and the story.
the production quality is actualy quite impressive. pretty much every dialogue line is voiced, there's even a narrator and most of the voice-acting is quite good (there are some misses). what is even more impressive is the amount of voiced lines.
not just the plot is fully voiced, but your party comments pretty much on everything, either with one-liners or full on conversations. find a locked door? comment.
find a new enemy? comment. combat? comment. rest at a camp? comment. you get the picture.
the writing is quite endearing and pretty upbeat most of the time.
adin well crafted ingame cutscenes and hand-drawn (very pretty) stop-motion-movies and you get the most story heavy 1st person dungeon crawler...like ever.
while the grafic won't win any prices, the art-design is top notch. enviroments, 2d portraits, 3d enemy models (especialy bosses) and npcs are very nice to look at. the presentation just flows very well.
the soundtrack helps to carry the mood of the game and the ambient work is phenomenal (from nature sounds in forests, to cracks and rumbels in caves and dungeons).
where the game is a bit lacking is the depth of other similiar games (like Wizardy or Might&Magic). character progression is based around attribute, 3 "skill-trees" per character, which consist of active abilities and passive buffs. there's also kinda like a perk-system.
crafting evolves around "brewing" things in a couldron, which works through unique recipes you gotta find. it's kinda like a neat little minigame, design around a puzzle approach.
everything neccessary is here, it just looks/feels a bit lacking compared to the big names in the genre.
combat is turn based, which i personaly prefer to what some other games did.
the game world itself is not just stunning, but also filled with secrets, metroidvaniaesque backtracking and puzzle (which are nice little diversion unlike what Bard's Tale 4 did, it's nowhere near as puzzle heavy...thankfully).
i can fully recommend the game. you get alot for the price and most (nearly all) of it is defintily quite competend.
however the negative i got to mention is the way your party evolves:
you get to create 1 character after the tutorial/story-introduction, choosing between 3 classes.
from there on out you find new npcs in a linear manner. these npcs kinda follow similiar "classes", and while offering more variety than your own innitial choices there's not a lot you can change build wise.
so if you don't choose a mage at the beginng you will be stuck without a mage for quite a while and even when your party gets full: you get a druid and a healer, but no dedicated elemental mage.
so if you want the "best" advice i can offer you: choose a mage.
if Operencia had more depth when it comes to build variety and character progression it would definitly be an absolute highlight, but as it stand it's a very good 1st person dungeon crawler, which focuses on story/characters and will net a great a playtrought, but lacks in replayability.
i usualy avoid all the "epic"-exclusive games (even the timed ones), but this one is my guilty pleasure....sue me ;)

Review by Gaming Masterpieces - The greatest games of all time on Steam.

Is this game a masterpiece? YES. At least for fans of classic dungeon crawler RPGs like me.
One of the most influential gaming experiences for me was Interplay's Bard's Tale: Tales of the Unknown from the mid-80s. It introduced me to the RPG genre and provided me with endless hours of fun. Operencia is the first game that evokes a similar feeling in me again, 35 years later. It is a dungeon crawler with tile-based movement and turn-based combat. Like Bard's Tale was. The only striking difference is the quality of the graphics. Operencia is gorgeous. And, contrary to Bard's Tale, your mouse allows you to look around freely and interact with hotspots. Additionally many QoL improvements make the whole experience more casual. For example, you don't need to draw your own map on graph paper anymore, there is an automap. The game is saved easier, not only when you reach the Adventurer's Guild. If you prefer it the old way, you can turn off the minimap & the objective markers and then turn on permadeath. I like a challenge, but this is a bit too hardcore for me.
After creating your character out of 3 classes you begin your adventure in a cursed underwater castle where you find the first (of 6 possible) of your additional party members, an old thief who was just robbed. He writes a journal of your adventure, which you can read anytime. There is also a guide available, detailling stuff you discovered and new gameplay mechanics. Quite helpful if you don't want to write down everything. And there is a LOT of lore in the game. I would not recommend the game to anyone who hates reading. Character management offers you an equipment screen, one for your talents, one for your skills, one for your attributes. Quite complex, while the character creation of your main character was ok but not of Baldur's Gate complexity.
You manage your whole party, but your main character is a young hero/heroine who had a recurring dream and sets off to adventure just because of this. Quite an idiot, if you ask me. The other characters comment on the story or your decisions or make fun of you, but you decide on their equipment, upgrades and of course you give them orders during the fights. Fights are turn-based with the usual options, like attack, defend, use spells, skills or equipment.
The party can be healed when resting at campfires spread over the gameworld (even in a wet underwater castle...) as long as you have found a bit of firewood before. You can also save your game at a campfire, and there is an auto-save at certain moments during gameplay. The gameworld is big, besides the country of Operencia there is also the Underworld and an Upper World. To advance you have to find and solve puzzles, from pulling levers or finding keys to some more advanced ones. The first puzzle for example consists of moving mirrors to seal an exit of the Underworld.
The production values are rather high, apart from the stunning graphic you get to see many cutscenes, there is a lot of voice-acting through the game, my ultrawidescreen monitor shows the game in perfect 1440x3440 with 144 Hz, if you don't want to play with m+kb you can also use a controller.
Conclusion:
Best Bard's Tale inspired dungeon crawler RPG available at the moment.

TL:DR; Pretty but unrewarding, slow progression and a game more focused on exploration than combat.
Have to recommend due to:
-Very pretty
-Runs well, no crashes or bugs
-Nice atmospherics for immersion, sounds music voice acting all well done
-Nice lore, using a mix of central european myths and legends adds some good quality and feeling to the background
However, game lacks depth. It's very simplified and there is little to no customization. There is no way to gain xp or gear beyond what you are provided by the very limited number of enemies, and leveling even at level 3 feels slow and unrewarding. It feels like an RPG with training wheels on that is targeted at a younger age group than I was expecting. Difficulty is set at the beginning of the game with no option to change during, so if it feels a bit easy or hard the only way to change this is to start from scratch. Explanations of what some of the buttons or effects do is lacking, eg the 'optimize all' button changes all your equipment to the supposed best fit-out, but doesn't explain why having a second weapon or shield equipped is not optimal (?). Some design choices are odd, such as having enemies move around the map in real time, going so far as running after the player if spotted, however all player movement and combat is grid and turn based.

Operencia: The Stolen sun is really a good game.
The combat system is turn based and easy to learn.
After the tutorial you need to create your character. You can chooses between 3 classes. In game you will find new weapons, powers to use.
There are many secrets to find. Check every room and walls because it is needed. I also love the puzzles to get further in the game.
The game use a campfire to save your progress. But to use the campfire you must use wood that you need to find.
Watch here the First part of the game:

So the game is based on Hungarian legends. As a Hungarian I can tell that they did a pretty good job telling these old stories, and they made me feel the same way, like when I 1st heard them decades ago.
But not only the story telling is great, the combat system, the tactis required for harder fights, and the puzzles, oh my god the puzzles are amazing and really makes your brain work!
I can only reccomend this game, even if you are not a huge fan of Dungeon Crawlers. The puzzle elements will blow you away.
Magyar legendák és történetek!
-Csoda szarvas
-A 7 vezért
És még sok más ősi mese! Ezeket meséli el nekünk az Operencia című játék! Egyébként is nagyon jó! De mint magyar játékos, különösen felemelő élmény játszani vele!
A magyar nyelvű tesztet itt nézhetitek meg!

Very smooth Snark in this game that I love, the characters are lively and enjoyable with great voice acting. I think my only major complaint is how Monster's can SUMMON other monsters that instantly act(More often than not using Taunt which makes them sole focus for attacks) and then they back and forth the Taunt skill making it irritatingly grueling to fight Bosses and Some encounters since the chip damage leaves you wide open to the heavy hits enemies can land.