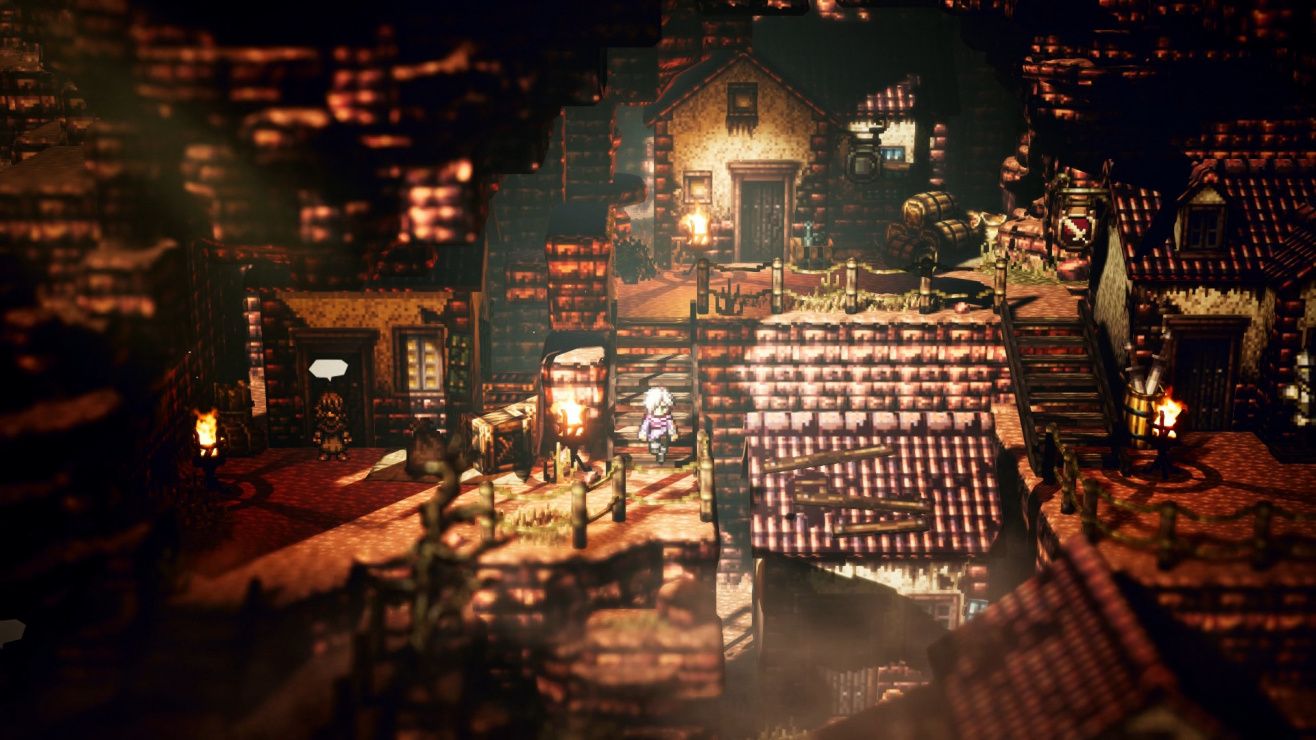 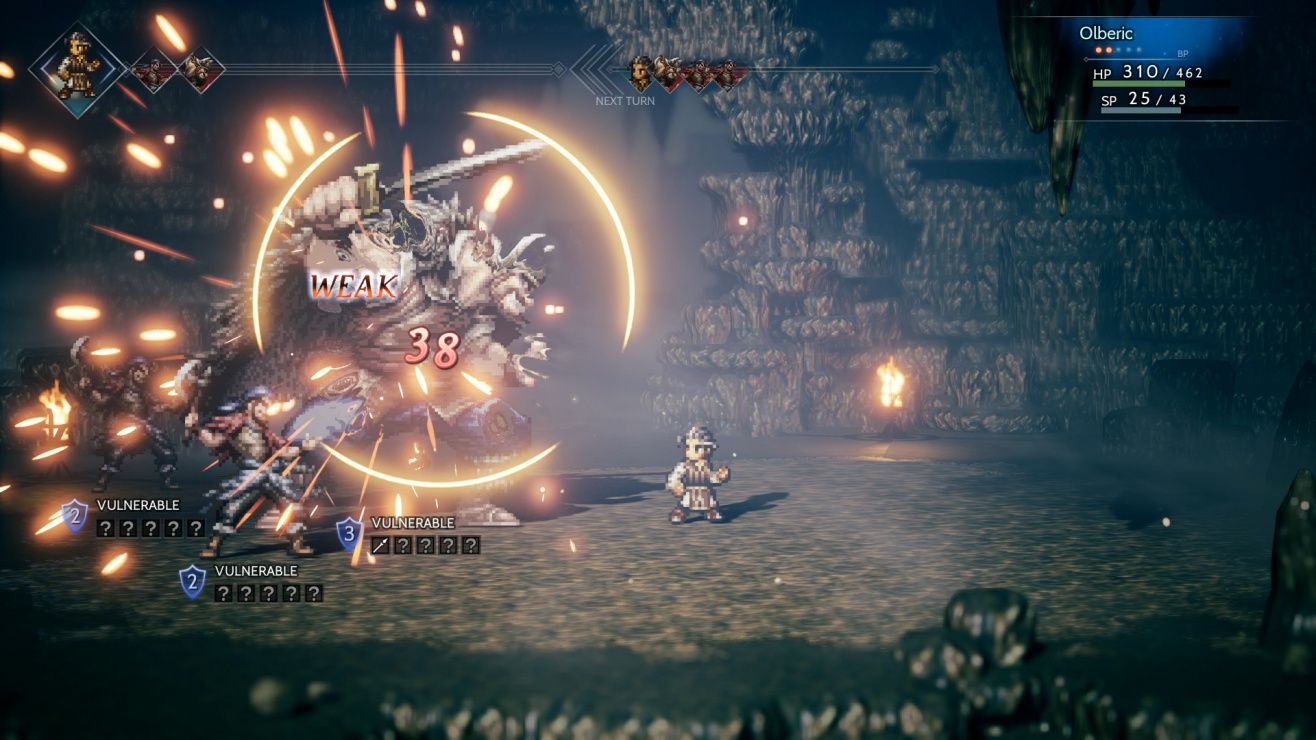 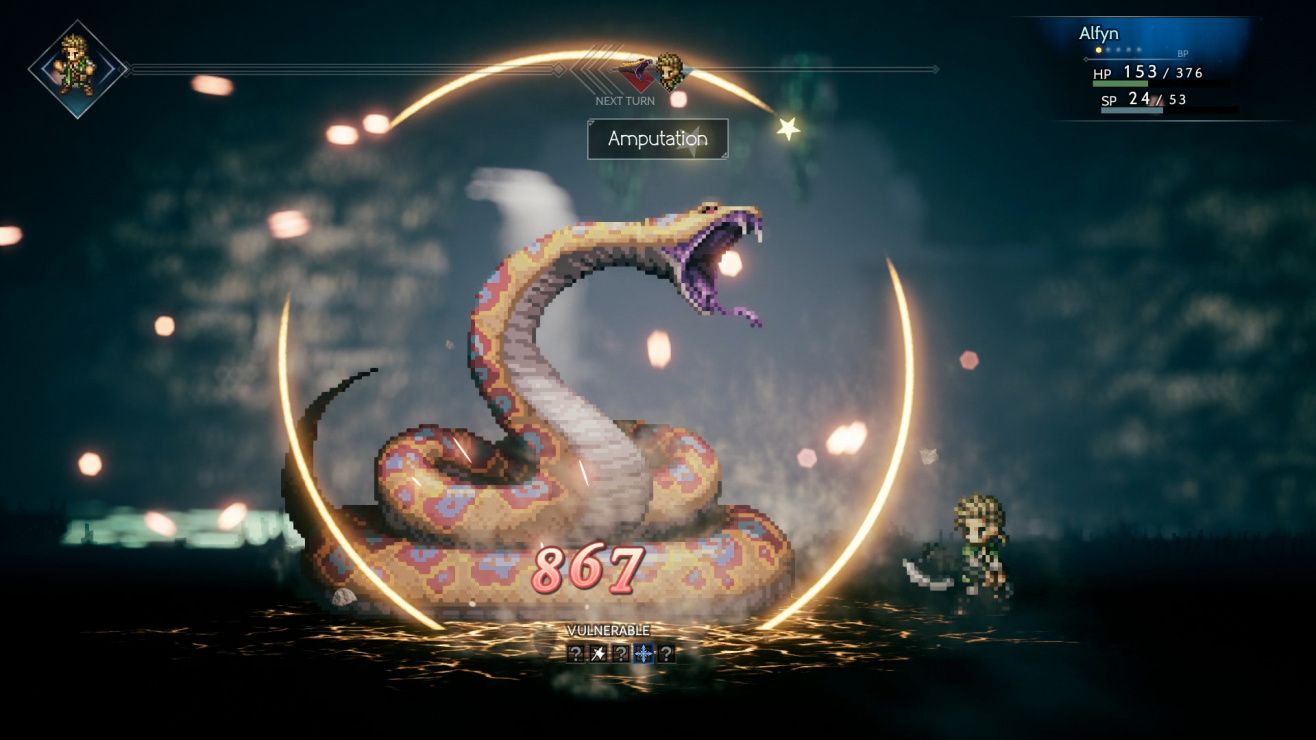 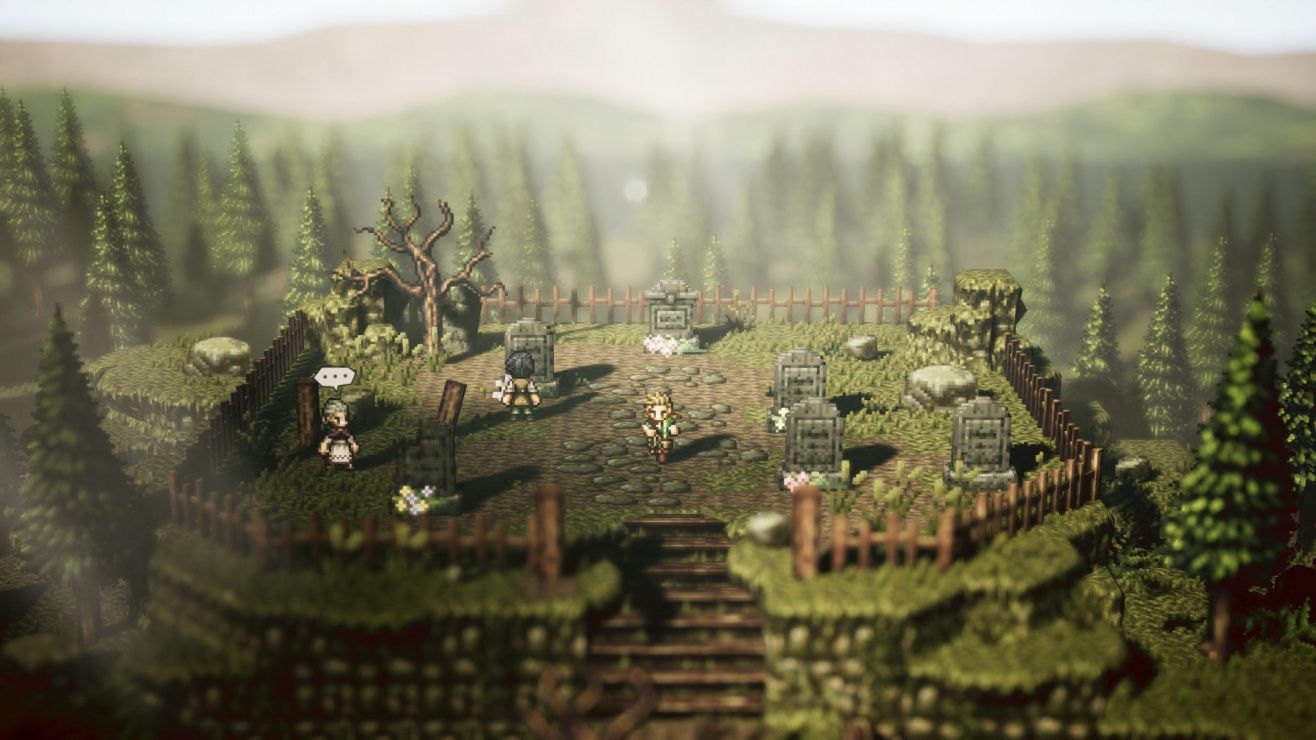 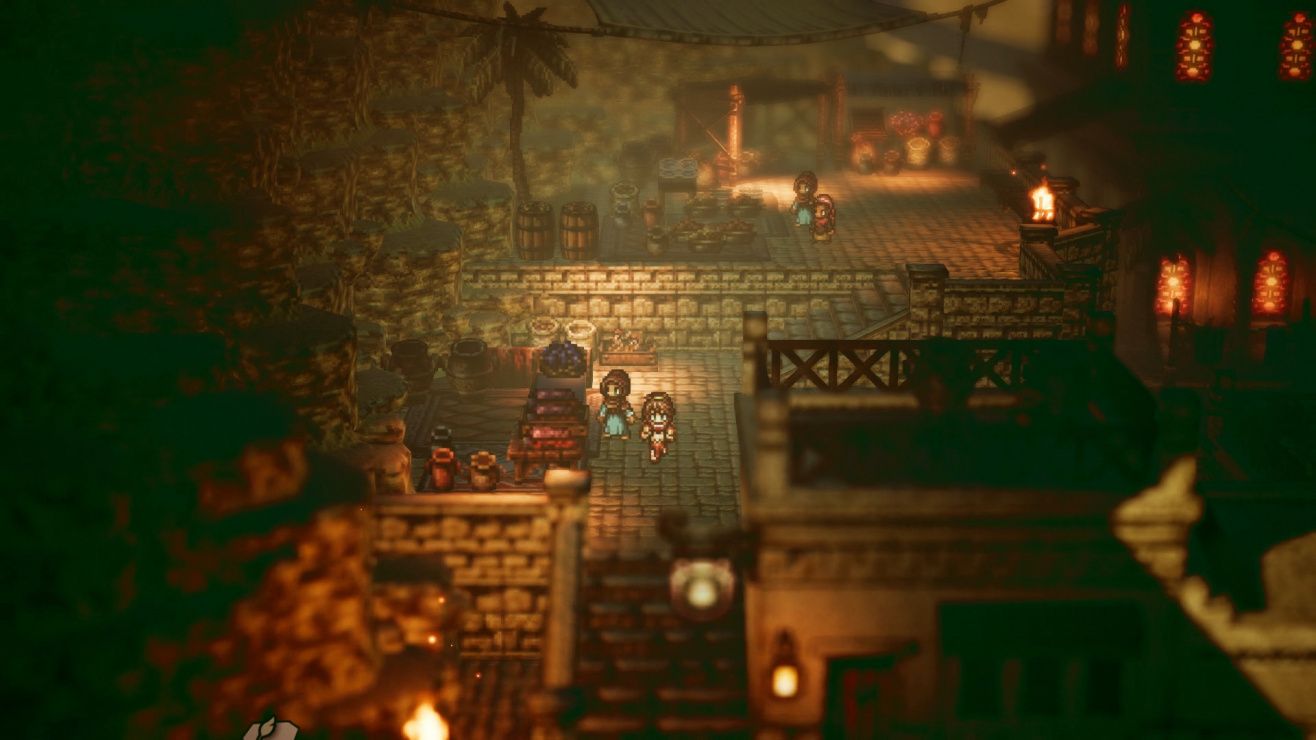 PC Steam Console Nintendo singleplayer rpg story role-playing anime japan
The award-winning RPG comes to PC! Eight travelers. Eight adventures. Eight roles to play. Embark on an epic journey across the vast and wondrous world of Orsterra and discover the captivating stories of each of the eight travelers. - Play as eight different characters, each with their own stories to uncover and side quests to complete - Explore the enchanting yet perilous world of Orsterra, spanning 8 vast regions and discover each character’s full story as their journey unfolds - Use each character's distinctive abilities (Path Actions), skills and talents in frenetic battles - Enjoy the accessible yet deep turn-based combat battle system and break through enemy lines by identifying and targeting their weaknesses - Solve side quests and story scenarios in a few different ways and take decisions that shape your path. - Experience visuals inspired by retro 2D RPGs with beautiful realistic elements set in a 3D world
Share Share Share
Promote for 50G

I don't care if you play the game, I don't care if you pay £50 for it or if you wait for a sale to buy it.
For the love of god, listen to the soundtrack. It is outstandingly beautiful and a divine pleasure for your ears. Probably one of the best soundtracks any game has to offer. Don't worry about going on to Youtube for it, its on Spotify.
Beautiful art style that changes how pixel art can be utilised, great and satisfying game play. An amazing game for any JRPG fan.

If you like SaGa (Romancing / Frontier) series games or LIVE-A-LIVE, you're likely to enjoy Octopath Traveler. Conversely, if you enjoyed Octopath Traveler, I can recommend checking out SaGa games (except for the one entry that wasn't very good that I can't remember)
Eight stories that highlight the convictions and beliefs of each character with a subtle behind-the-scenes plot that rewards the interested and observant. Each story is segmented and isolated--the game acknowledges each character as travel banter between quest destinations, each character is truly the hero of their own story. As you move through each ordeal you learn more about the past and the present and what the evil of the world is working towards. Afterwards, it all comes together and what the common thread between each Traveler is and the eight of you endeavor to beat back the true evil of the world.
The battle system is fantastic. It is both interesting and thought provoking. There's the Boost Point system that lets you power up your skills and spells as well as the job system that lets each Traveler have a secondary class on top of their main job. This mix and match style opens up a lot of strategy.
The only potential flaw is dungeon design. It's rather straight forward. No puzzles, only combat. The true puzzle is figuring out how to complete the hundred side quests and unlocking the true final boss.
It's a good game, worth a play.

Every element of Octopath Traveler comes together perfectly it feels like a gem from the golden age of JRPGs if you're craving for nostalgia yet you want stunning visuals than this is the game for you.
eight characters and eight stories to chose from, your adventure across the world of Osterra will be breathtaking.
~ PROS ~
Fun and easy combat system
Plenty of diverse characters
All eight playable characters have different skills, abilities, and personalities.
Soundtrack is amazing
~ CONS ~
The characters/story lines do not interact with each other
Grinding isn't for everyone
to many random encounters
some of the stories are just not that interesting
~ DIFFICULTY ~
🔲 Easy
☑️ Normal
🔲 Hard
~ GRAPHICS ~
🔲 Bad
🔲 Good
☑️ Beautiful
~ MUSIC ~
🔲 Bad
🔲 Good
☑️ Eargasm
~ STORY ~
🔲 This game has no story
🔲 Bad
☑️ Well written
🔲 Epic
~ PRICE ~
🔲 Underpriced
🔲 Perfect Price
☑️ Could be cheaper
🔲 Overpriced
~ REQUIREMENTS ~
☑️ You can run it on a microwave
🔲 Average
🔲 High end
~ LENGTH ~
🔲 Very Short (0 - 3 hours)
🔲 Short (3 - 15 hours)
🔲 Average (15-50 hours)
☑️ Long (50-90 hours)
~ FUN ~
🔲 Hard to enjoy
🔲 Repetitive
☑️ Actually pretty amusing
🔲 Ride of your life
~ REPLAYABILITY~
🔲 It's a one-time experience
☑️ Only for achievements
🔲 Definitely
~ WORTH BUYING ~
🔲 No
🔲 Wait for sale
☑️ Yes

---{Graphics}---
☐ You forget what reality is
☑ Beautiful
☐ Good
☐ Decent
☐ Bad
☐ Paint.exe
---{Gameplay}---
☐ Very good
☑ Good
☐ It‘s just gameplay
☐ Mehh
☐ Starring at walls is better
☐ Just don‘t
---{Audio}---
☑ Eargasm
☐ Very good
☐ Good
☐ Not too bad
☐ Bad
☐ Earrape
---{Audience}---
☐ Kids
☑Teens
☑ Adults
☐ Human
---{PC Requirements}---
☐ Check if you can run paint
☑ Potato
☐ Decent
☐ Fast
☐ Rich boiiiiii
☐ Ask NASA if they have a spare computer
---{Difficulity}---
☐ Just press ‚A‘
☐ Easy
☐ Significant brain usage
☑ Easy to learn / Hard to master
☐ Difficult
☐ Dark Souls
---{Grind}---
☐ Nothing to grind
☐ Only if u care about leaderboards/ranks
☐ Isnt necessary to progress
☐ Average grind level
☑ Too much grind
☐ You‘ll need a second live for grinding
---{Story}---
☐ Story?
☐ Text or Audio floating around
☐ Average
☐ Good
☑ Lovely
☐ It‘ll replace your life
---{Game Time}---
☐ Long enough for a cup of coffee
☐ Short
☐ Average
☐ Long
☑ To infinity and beyond
---{Price}---
☐ It’s free!
☑ Worth the price/maybe wait for a sale
☐ If u have some spare money left
☐ Not recommended
☐ You could also just burn your money
---{Bugs}---
☑ Never heard of
☐ Minor bugs
☐ Can get annoying
☐ ARK: Survival Evolved
☐ The game itself is a big terrarium for bugs
I don't often post reviews, but for this I felt compelled. Primarily I think I love this game so much for nostalgic reasons. It's a genuine throwback to years gone by and the original FF on Nintendo. Yes, plain ol' Nintendo! (Or maybe it was Super Nintendo?)
The graphics are so much more enjoyable than you think pixelated graphics would be. The settings are lovely, but I would say that the enemies, especially larger ones, do look a bit degraded, but it doesn't take away from the enjoyment for me. The game play is easy on the surface, but it requires planning and forethought if you want to be expeditious, and you have to be if you want to level all eight characters. Actually you have to fight a lot, or at least I do, as I haven't yet figured out a way to be leveled enough for the next chapter without grinding up my levels (though somehow it's a chore but kinda fun.)
If you love old FF games or JPRG's and are looking for a new twist, this is for you! If you're unsure, wait for a sale as the full price does seem kinda hefty but might be worth it for a fan. (I picked it up on a sale.)

So good I double dipped, Switch version is good, but the frame rate and crispy textures are the PC's main draw.
Eight different characters with eight great stories all interwoven into a great jrpg.
Combat is good and Boss fights can take awhile, has that feels good I beat it feeling to it.
50 hours in and maybe halfway, goes on sale for $30 from time to time, worth picking up.
Edit: 112 hours in and imo worth it all full price, has enough different and unique methods.