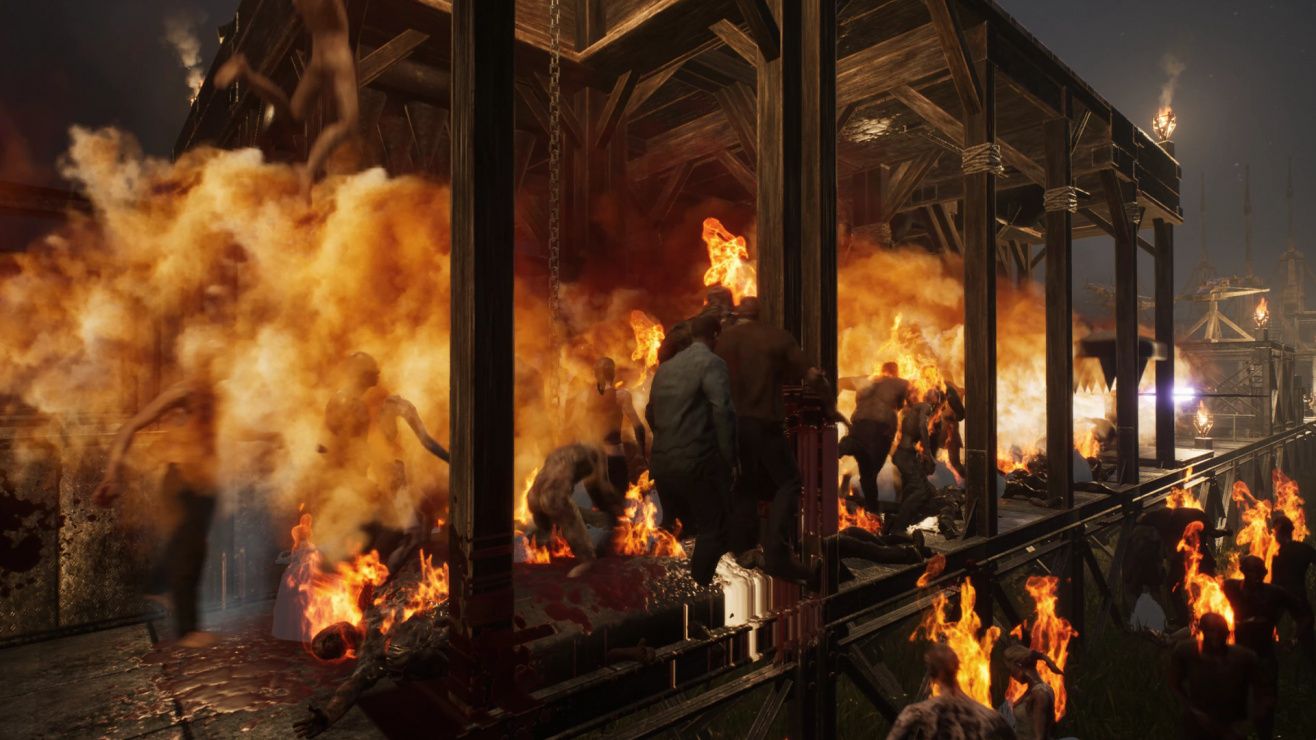 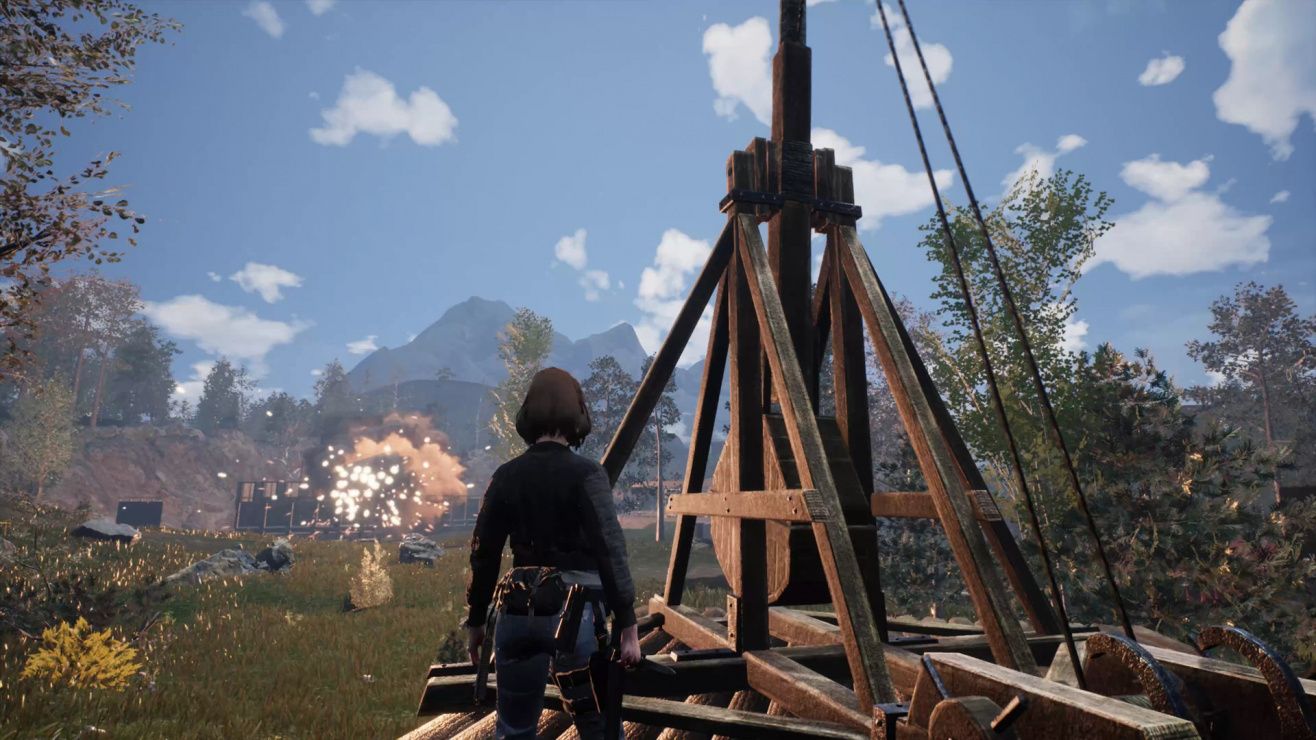 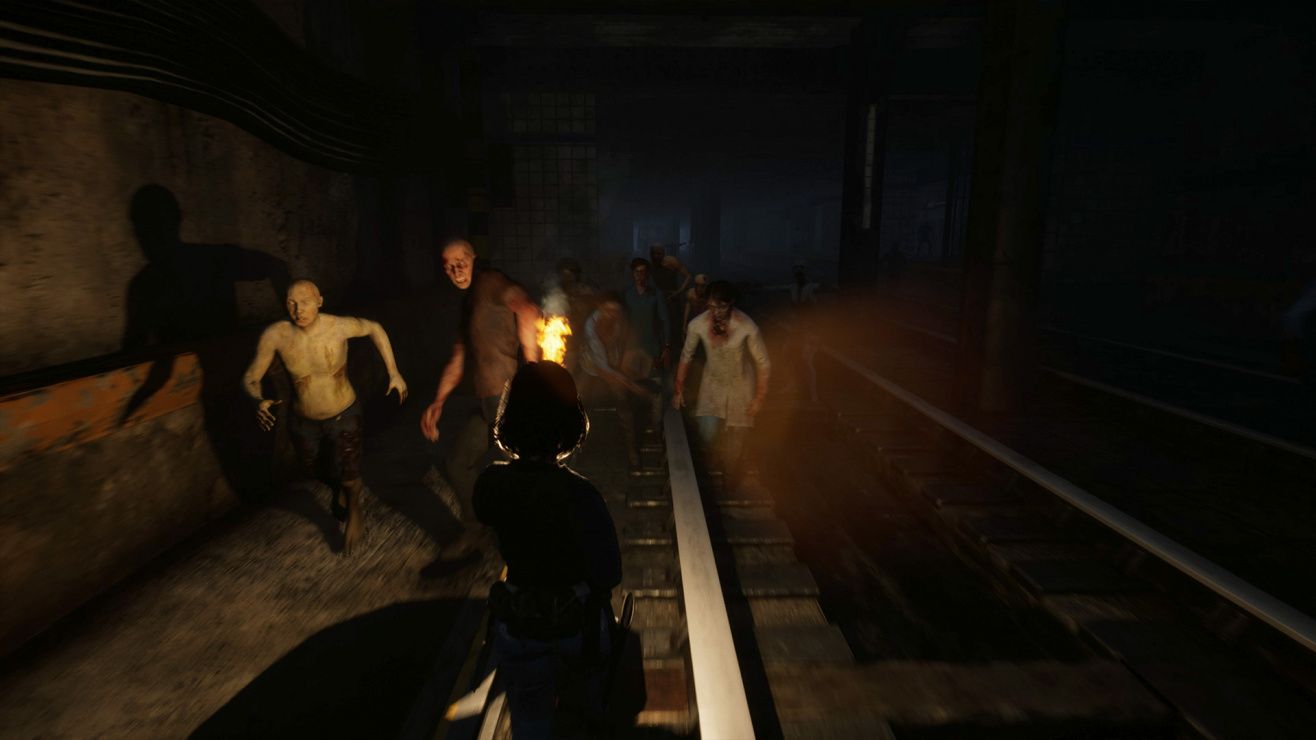 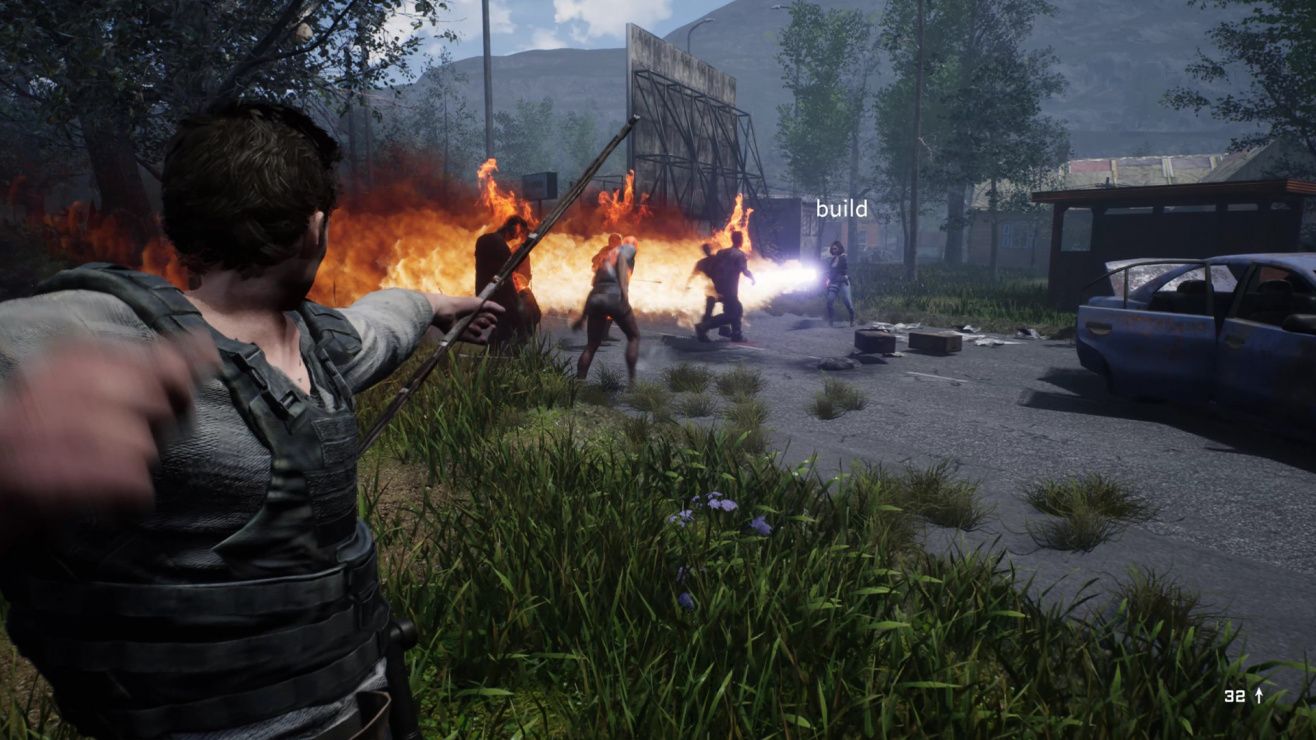 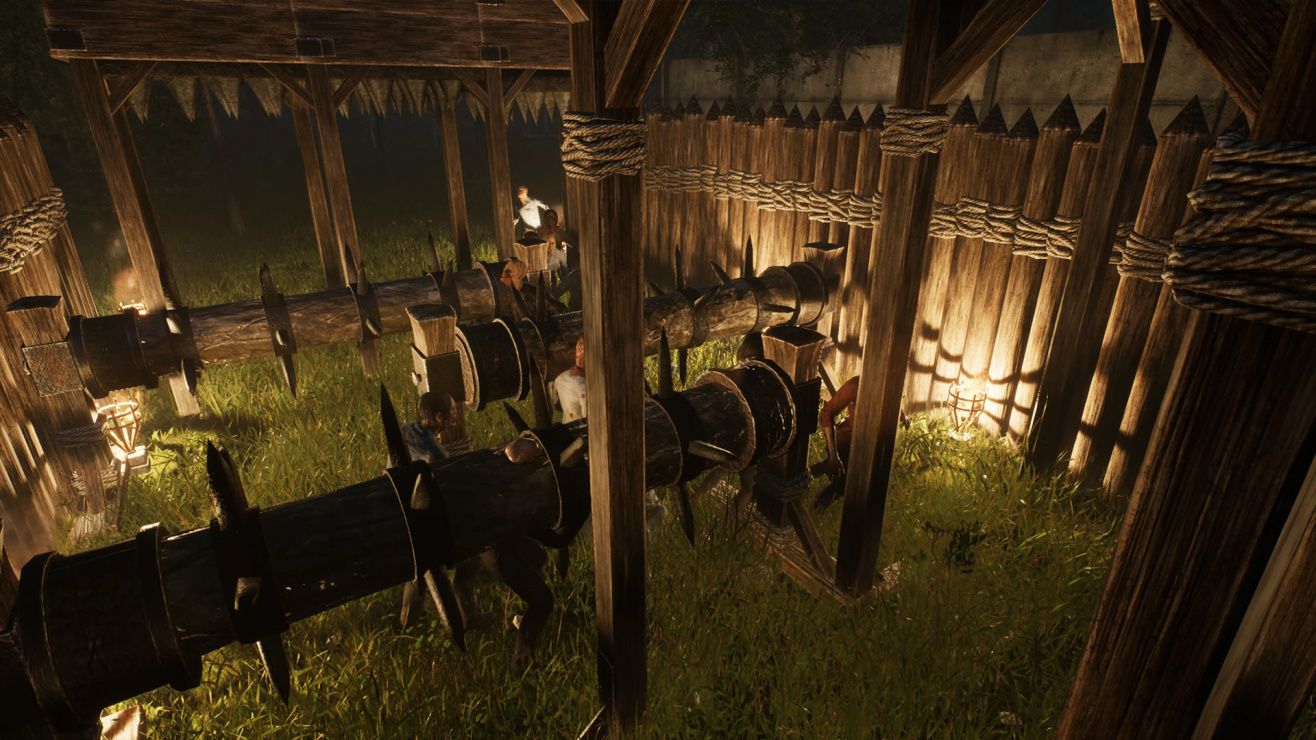 Night of the Dead

PC Steam survival dark zombie sandbox evil undead cooperative
We continue to share interesting adventure options that will surely become the basis for a pleasant pastime. This time we offer you to go on a rather unusual adventure that will allow you to go to a world covered with darkness and unusual zombies. You will play as a beautiful girl named Lucy, who became the victim of an unsuccessful experiment. Now she is forced to survive in this world and try to ensure herself a normal existence. Therefore, we suggest that you take advantage of all available opportunities and try to achieve the desired result.
Share Share Share
Promote for 50G

Thought I bought an open world survival game, but it turns out it is just a tower defense game where you have to find/hunt/mine/chop the ressources needed to build your defenses.
It is still good though, just not what I thought it would be.

Great alternative to 7 Days to Die. I have played 2749 hours on 7 Days. And as I love the game, its getting old. Since i have started playing Night of the Dead there have been multiple updates, which I love because the devs seem really involved in this game. There is room for improvement and things I would like to see to make the game even more fun, but this game has a lot of potential. I also love that you can play with friends. It seems like the devs have put a lot of thought in the development of this game, and I hope they continue.

I like the game a lot for starters BUT read carefully to consider before buying.
The game is overall fun, lots to offer and the devs seem to be continually improving. That being said there
are a few issues that need to be addressed that have caused me to shelf the game again till later.
1. The games needs a scaling option on wave days, e.g. the option to have waves every other day or
even further apart. Many including myself would like the option of a challenge but with a more laid back
option. Making the end of every day a zombie wave night is just to intense.
2. Waves need to be revisited. By day eight the number of mobs and high level npc's are through
the roof. This is too much too early and again demands intense game play. Example, I upgraded to a
lvl 9 grenade launcher and pelted the crowds with grenades doing 280 damage a pop and many of
these mobs took five direct grenades before they would finally die. Math? Nearly 50% of the mobs on
day 8 take 1,400 damage to die.
Conclusion - right now even on normal it scales so rapidly that everything feels like hardcore mode.
This can easily be balanced to the player through options as 7Days to die does.

Initially a 3rd person, tower defense game with zombie waves, yet has options to disable waves spawning so you can play it like a sandbox survival game. You play as young woman who woke up in one of shelter bunkers into the overrun world full of zombies. Story so far is minimal, in form of couple journal entries and ability to call in a rescue to escape (game over).
Visually it looks alright, has a big map, tons of resources (plenty but no respawn) that you can gather, harvest, mine. Some wildlife: deer, boars, wolves, rabbits, foxes, birds. 24 hour day and night cycle, some simple survival elements (eating), crafting and building system, cooking, basic skill tree. There's also decent variety of melee and ranged weapons, tools, clothing that you can find or make yourself.
Gameplay wise it's a tower defense game at heart, with traps and waves of zombies that come every night, unless you turn that off. Then it can be relaxing, zombie survival with exploration, building and resource hoarding. Controls and animations are clunky and need more work to get them fluid. There's no character customization apart from clothes.
Not much to say otherwise, it's decent, reminded me games like 7 Days to Die and Mist Survival, with similar look and assets. I'm sure this can be a solid game with more options, polish and content. Took me around 40 hours to explore the map and loot all there is laying around. I didn't bother with tower defense elements (waves and traps) since it's not my thing and only built / upgraded base and explored instead.
Game could use some optimization as well, it often chugs, drops frames on recommended specs even with ssd. But overall is playable if you disable some settings. Didn't experience any crashes or bugs.
Have fun.

First of all, let me start off by admitting that I am absolutely a soft touch when it comes to indie games. I'll forgive them for things I'd never accept from a AAA design studio, and with good reason. It takes so much guts to be an indie designer, to go out there with nothing but passion and a dream and make something that other people are happy to spend hours of their life playing.
Night of the Dead is very much a work in progress, and it doesn't pretend to be otherwise. But, every masterpiece has to start off with a rough draft to begin with before you can polish it up. And that's what we're lucky enough to have the opportunity to play here: A diamond in the rough.
I have been looking for a game like this for a long time, and I'm thrilled to know that someone is building one. Oh, it'll probably be years before it's completed, but that's okay. It's fun now, and it's going to be amazing when they're done with it.
The part I find most interesting is that while it's designed as a multi-player tower defense game, they've also included a single-player version that somehow manages to be one of the most entertaining crafting-based survival games I've ever had the privilege of playing. If the multi-player is half as fun as the single-player, then they've got a really solid core for a good game.
I'm not even going to go into the bad parts. There are parts that need work, but they already know that. So, let me just focus on the positive parts.
The crafting system is amazing, it's so complicated that when I first looked at it I was so confused and overwhelmed I didn't know where to start. But, the game walks you through it, and in no time at all you're building huge mazes of zombie-crushing traps and giggling like a lunatic as you watch an entire horde reduced to foul-smelling spagetti paste. And let me say... I hate traps in most games. I'm very much a hands-on zombie slayer. I never use bombs, traps, grenades, anything like that. I like to snipe things from afar, or zerg rush 'em. But, this game makes traps fun.
The map is HUGE. When I went into this, I was expecting the map to be tiny based off a couple of other reviews, but I have to assume those were based on an earlier version. I've barely found one of the edges so far, and there's a whole FREAKING CITY down there that I haven't even touched yet.
There are options for different play styles. I hear the multi-player is great, but there's also a solid amount of content for loners like me who prefer single-player. Want something action-packed? Pick a higher difficulty level and leave the zombie waves switched on - the game will get gradually harder and harder until you get overwhelmed. Prefer a more peaceful stroll to explore the map? No problem! In the last patch, they added the ability to turn off the zombie waves so you can explore and build without being randomly annoyed by grumpy zombies.
Now, a couple of small warnings if you are the squeamish sort, like me. There is a fairly realistic hunting system, in which you have to shoot or trap birds and wild animals to improve your weapons and supplies, and also for food. It's integral to the gameplay, so there's no avoiding it. There are noises that are pretty upsetting, and you have to craft using the skins, bone, and guts of the animals. I mean, it's all pretty cartoonish so it's not super disturbing, but it did freak me out a bit to start with. Also, some of the female zombies SCREAM SUPER LOUD when they die, which gave me an unpleasant fright on a few occasions. So, consider yourself warned!
Overall, though? Stellar game, and it's only going to get better. Well worth the price. Don't believe me? I've got a pre-ordered copy of Cyberpunk 2077 coming any day now, and there's a good chance I might leave it a while longer to play this. And I'm super excited about Cyberpunk 2077, so that's high praise!
Oh, and on the off chance the devs read this... guys, you are doing an amazing job. You should be proud of yourselves. Well done!

This game is a great addition to the zombie genre, and while it released into early access much later than some of its competitors, I feel like the developers have a much better grasp on what they're trying to do with the game and how to make things fun.
Many other survival games fall into the trap of making things TOO realistic at the cost of fun gameplay, or make zombies behave different from what you would expect just because the developers got into some type of arms race with the players and try to counter their effective building strategies.
These guys on the other hand have made combat quite enjoyable and added a whole bunch of cool traps and things you can use to kill zombies. They've struck the right balance between realism and fun gameplay.
The game runs well and I've had no issues playing it in multiplayer for hours in a row.
Content updates are not far apart and the developers frequently communicate their ideas and schedule.
Overall this is a very good use of EA.

Good Fun. A team of about 8 of us have all discovered this game in the last week. We're really enjoying it so far and have a laundry list of edits, suggestions, and frustrations with the game. However, it is simply a fun game. Not only is it challenging enough to get the heart racing with the S**t hits the fan, but it also has a since of relaxation that isn't present in other zombie/survival base-builders. There is a fine line that the devs have drawn here and we're loving it.
Note to devs* The fall damage that players receive seems unforgiving, can this be reduced or apply the same fall damage to non-special zombies?
Additionally, we have a small discord server about 30-40 players who we have all been trying to convince to buy the game. I have gifted 3 copies myself. One of my friends is in Puerto Rico, and cannont see my dedicated server? Is this because of region? If so, how can we fix that?