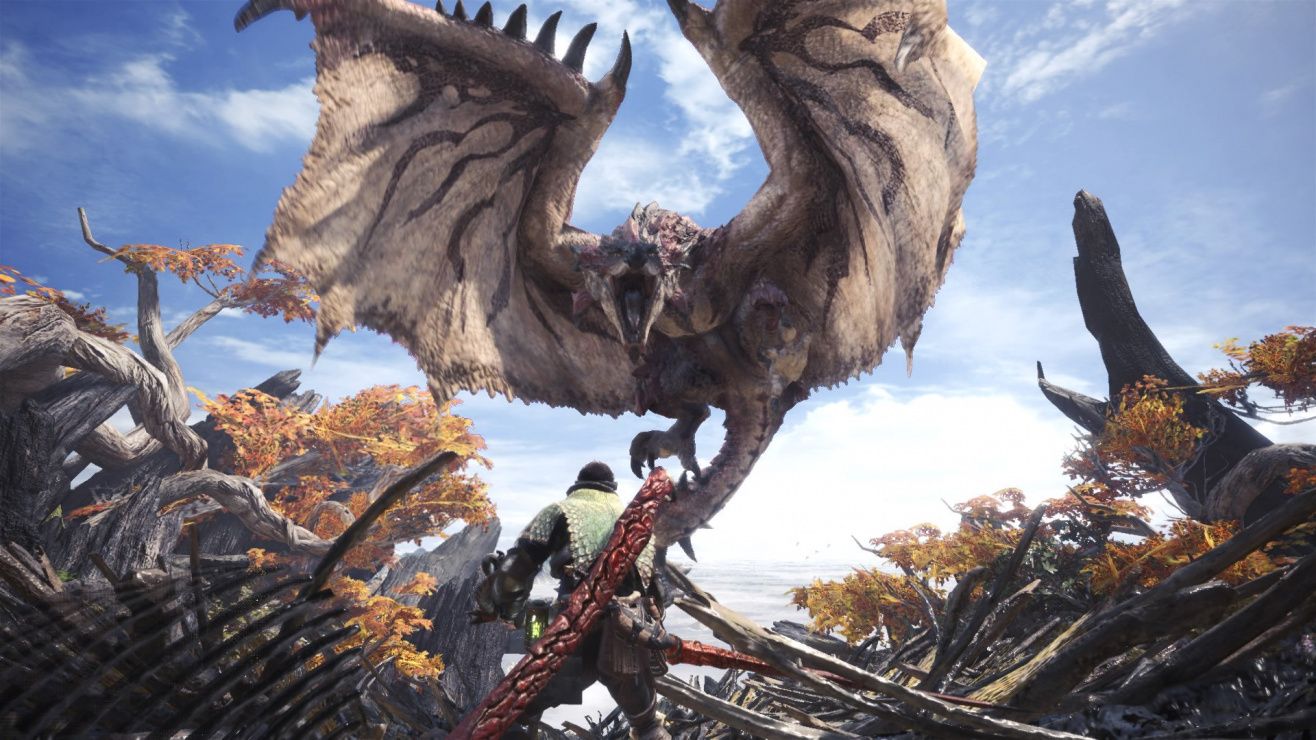 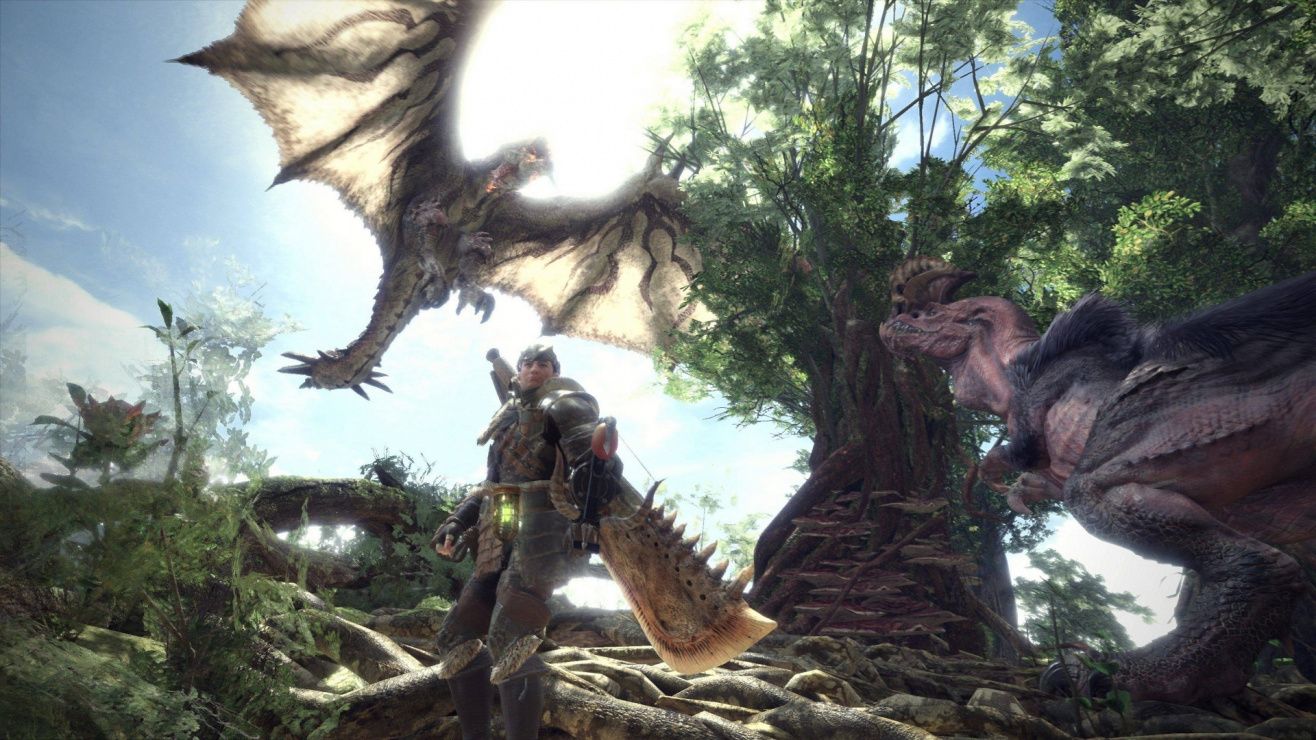 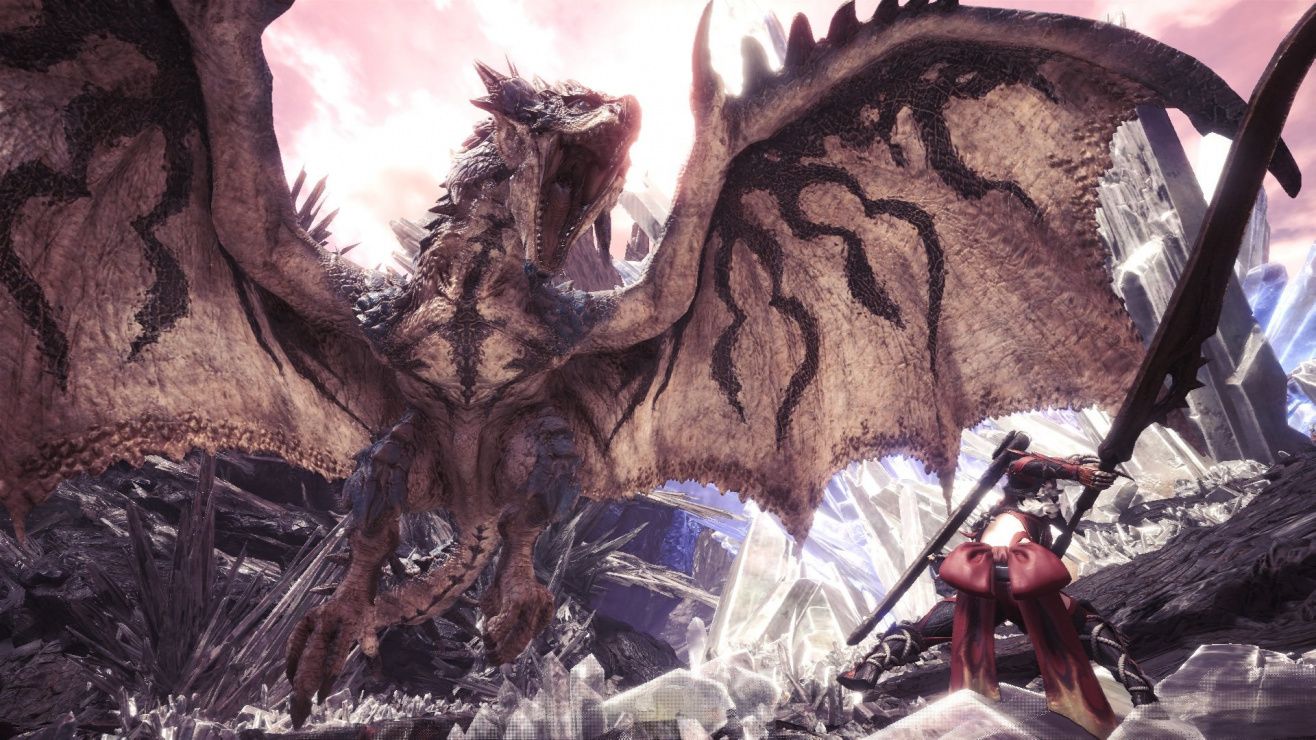 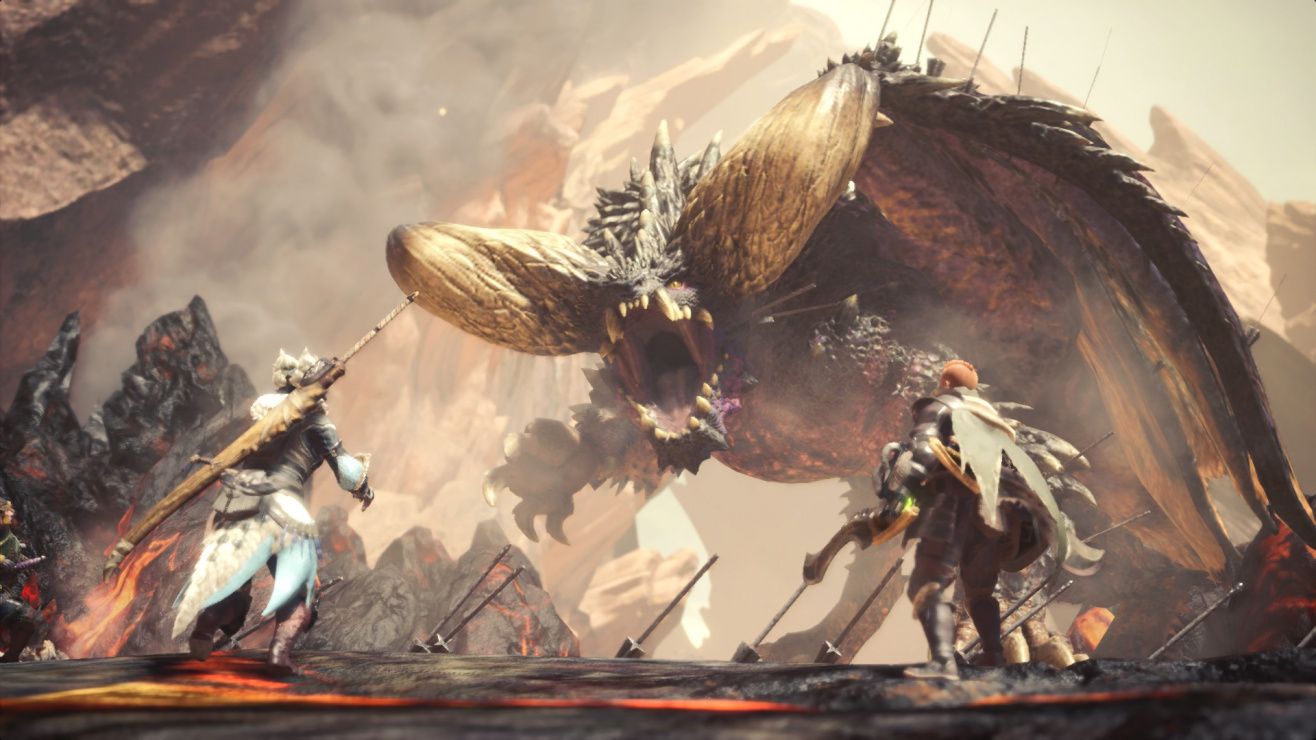 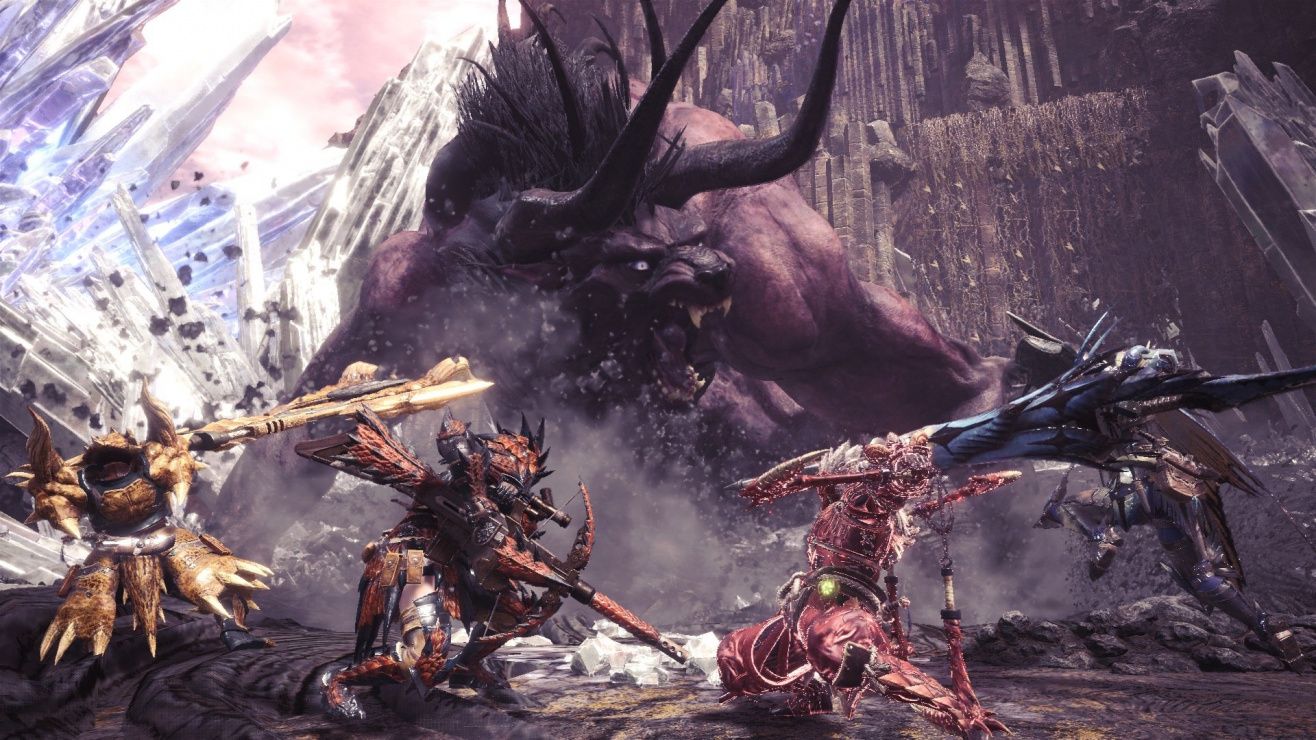 PC Steam Console Playstation Xbox fantasy magic sword slasher world dragon monster hunter beast
Welcome to a new world! In Monster Hunter: World, the latest installment in the series, you can enjoy the ultimate hunting experience, using everything at your disposal to hunt monsters in a new world teeming with surprises and excitement. Take on the role of a hunter and slay ferocious monsters in a living, breathing ecosystem where you can use the landscape and its diverse inhabitants to get the upper hand. Hunt alone or in co-op with up to three other players, and use materials collected from fallen foes to craft new gear and take on even bigger, badder beasts!
Share Share Share
Promote for 50G

If you're not familiar with the Monster Hunter franchise, this review might be for you:
The game starts of by looking like a convoluted mess to you. You pick your character and your cat buddy and next thing you know is you get thrown onto a massive walking volcano.
When reaching the main hub - while still confused about the start of your journey - you will be overwhelmed by a lot of choices and stuff that's part of the game: 14 different weapons - each with its own playstyle - tons of collectibles, craftable stuff, ammunition, potions, powders, bugs, plants, ... the list just goes on and doesn't seem to finish.
Then there are main quests, side quests, event quests, special assignments to take part in.
After picking a mission, you get thrown into the land and have to find out how stuff works, there's little to no explanation. You get some sort of a visualized guide by flies that show you the correct path - but they will confuse you sooner or later.
When fighting a monster - while still not knowing how to fight due to the lack of tutorials - you might die a lot.
Now this is the part that will either break you or where the game finally clicks.
I stopped playing twice and didn't think I'd pick it up; because of the tough fights that didn't seem to make sense to me and because of the collect-athon that just confused the heck out of me.
Well, I'm now close to 140h into the game and can't wait for the Iceborne expansion.
What more can I say... the game made me want to play on and on and on at one point. The fights were challenging and the moment the monster got caught or died was super satisfying and made you want to go for "just one more Monster before I quit".
I definitely recommend this game and urge you to give this game one, maybe two chances when you think "No, this is not for me." It most definitely is!

finding a weapon you actually enjoy: 4 hours
making a version of that weapon that actually does damage: 6 hours
realizing that the weapon isn't meta and is actually trash: 100 hours
smashing nerg's filthy head in with it anyways: Timeless

I came to Monster Hunter: World with no more than 45 minutes of experience played on some older PS2 game on a bad emulator.
I knew the game's fame in Japan, and it was due to this fame the series stayed on portable consoles and then Nintendo consoles for a bunch of time.
Gladly the PC gaming market was already big enough when Capcom finally decided to make a high bet on the series. So it was only a matter of months to receive the game.
I pre-ordered as soon as I decided if I would go for the Standard or the Deluxe Edition(I chose the Deluxe even after seeing people saying that it was just some skin and stickers, but I had the feeling that I would enjoy this game, so... -by the way, if you're short on money, go for the Standard Edition, you won't be missing anything from gameplay perspective).
The game is huge, if you know what you're doing(already played MH) and do just the bare minimum it will still take more than 30 hours. If you're fresh new and like to explore and try anything you see, it can take near 100 hours. And there still a lot of content after the campaign.
So, I played a lot, finished the campaign and was still playing, when I was around 200 hours invested in the game, my save got corrupted, I tried to ask the Capcom support, but they said they couldn't do anything. Tough luck...
On the next day I was creating a new char and playing everything again. That's how good this game is. I can't think of any other game that I would do this.
About the game... you run a lot around the map searching for the monsters, after you encounter them you smash, slice and shoot them a lot with one of the fourteen types of weapons, you try to not get stomped, bitten, clawed, headbutted, ran over, flamed, iced, electrified, watered, dragon-ed(!?) or exploded and, if you did ok, after half an hour you walk victorious with your cat. Oh, I didn't mention the cat, sorry. You are hunting the monster together with a biped cat wearing armor and it calls you meowster.
Being serious, this game has the best gameplay loop I've ever seen. Each of the 14 types of weapon changed the way you play the game, it would be the same as changing the class in other games, but you don't need to start a new character to see if you would even like to play as a different class. You just go to the blakcsmith and say "My dude, I want to try this other weapon, here's some monster parts and some money.", he gives you this new weapon and now your character is totally different, you will probably yell that this weapon is shit because now you get hit by a lot of moves that you were easily escaping before, then after some tries you start to enjoy this new weapon and it's now your second favorite weapon. Because no other weapon will take the place of the hammer that goes boom!
When you change weapon, all moveset of the character will be different, and I'm not only talking about the attacks, but walking speed, roll(or if you even will have a roll), time spent to sheath the weapon(yeh, even this is important), if you have a blocking ability or not, stances. So the moment-to-moment of the gameplay loop is always engaging. "Should I attack now? Should I heal now? Should I move left or right? Is it better to keep lying on the ground after getting hit or stand up immediately?(yep, this is important too).
The basic Monster Hunter: World is already a game where you can easily sink hundred of hours, you add Iceborne to that and you get on the 4 digits territory. The expansion is big enough to be a new game and you'll be revisiting all of the original maps for new things.
So, yeah, I couldn't recommend enough.
F*ck, didn't even talked about multiplayer... well, I do prefer playing as a single player game, but multiplayer can be funny, not so much when randoms are getting killed and making you fail the mission, but sometimes you'll even laugh watching those crazy suicide hunters... I do not recommend you keep calling for SOS right from the beginning, since this can bring people with end game gear that would wipe the monster in 2 minutes. Try to enjoy the game with players of similar level if you MUST play online.

By the way, Capcom, how about porting some of the old games?
Choose the biggest Monster Hunter before World and BANG!, I bet all the players who keep playing MHW would buy this thing at launch.
Oh, and while you're at it, bring me Breath of Fire IV too, alright?