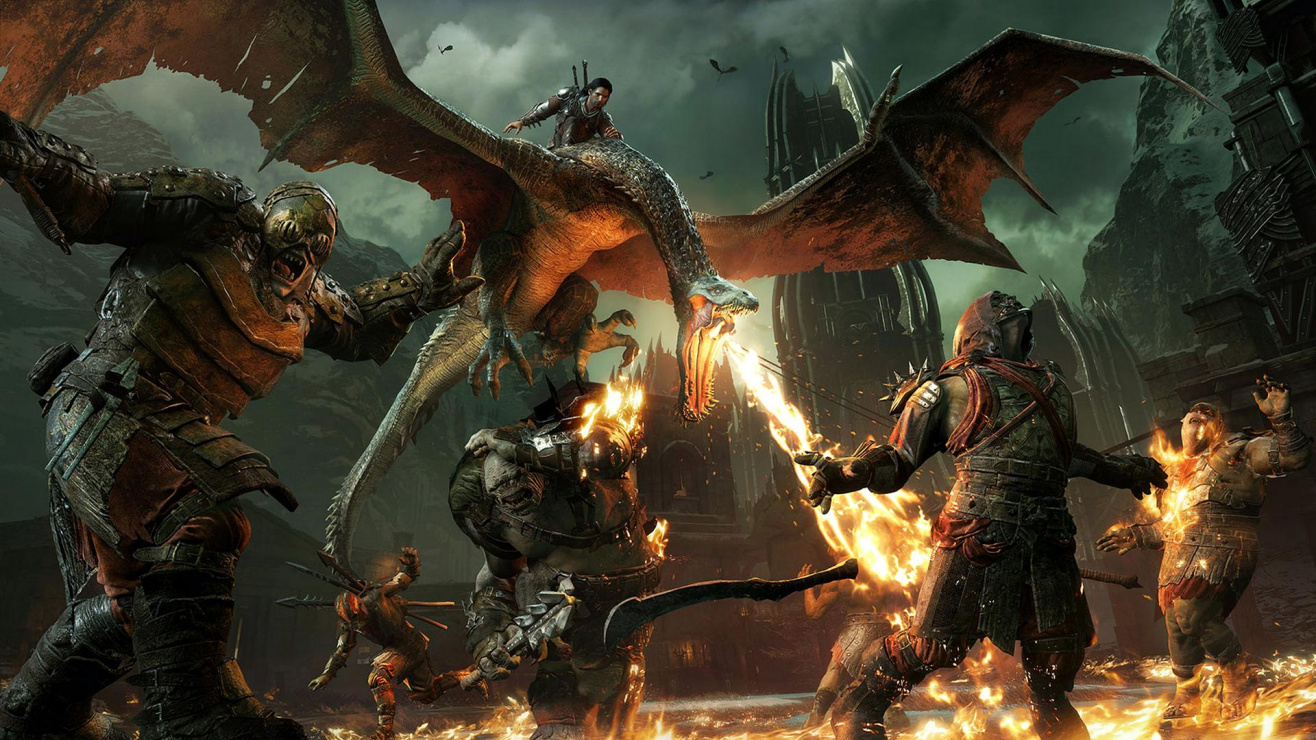 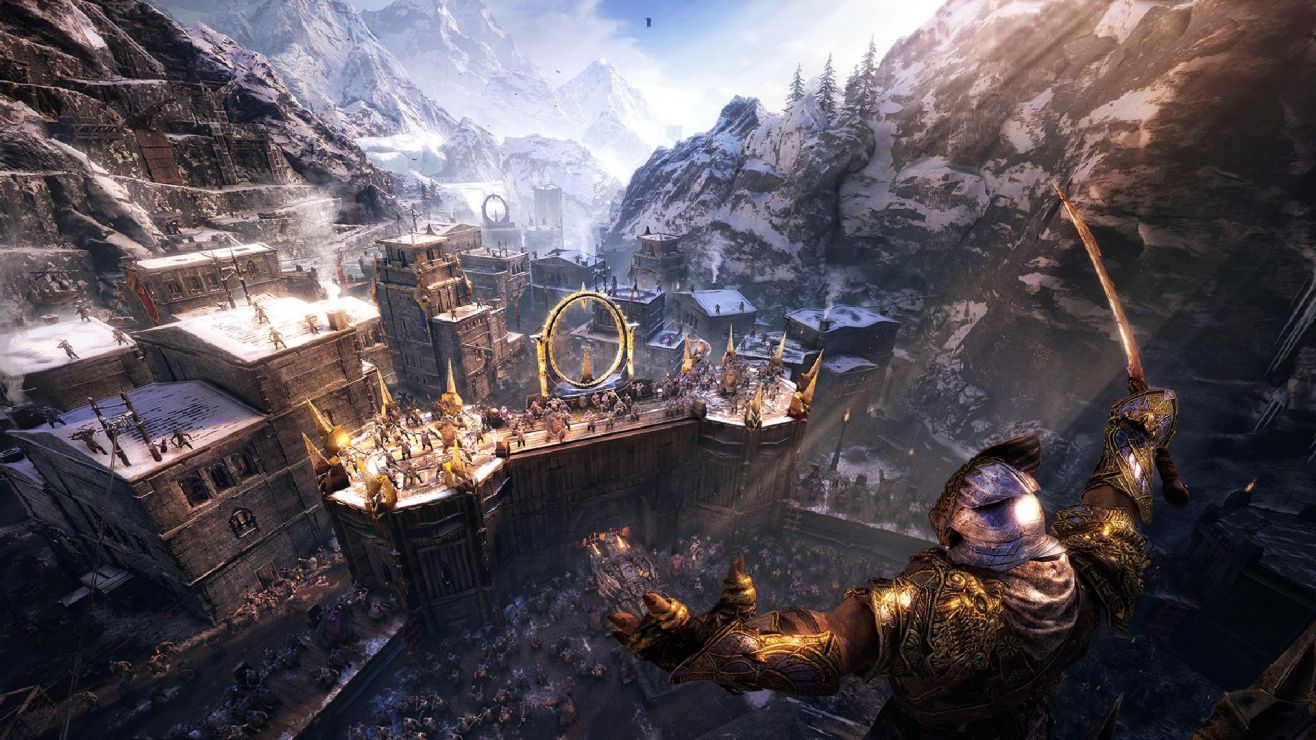 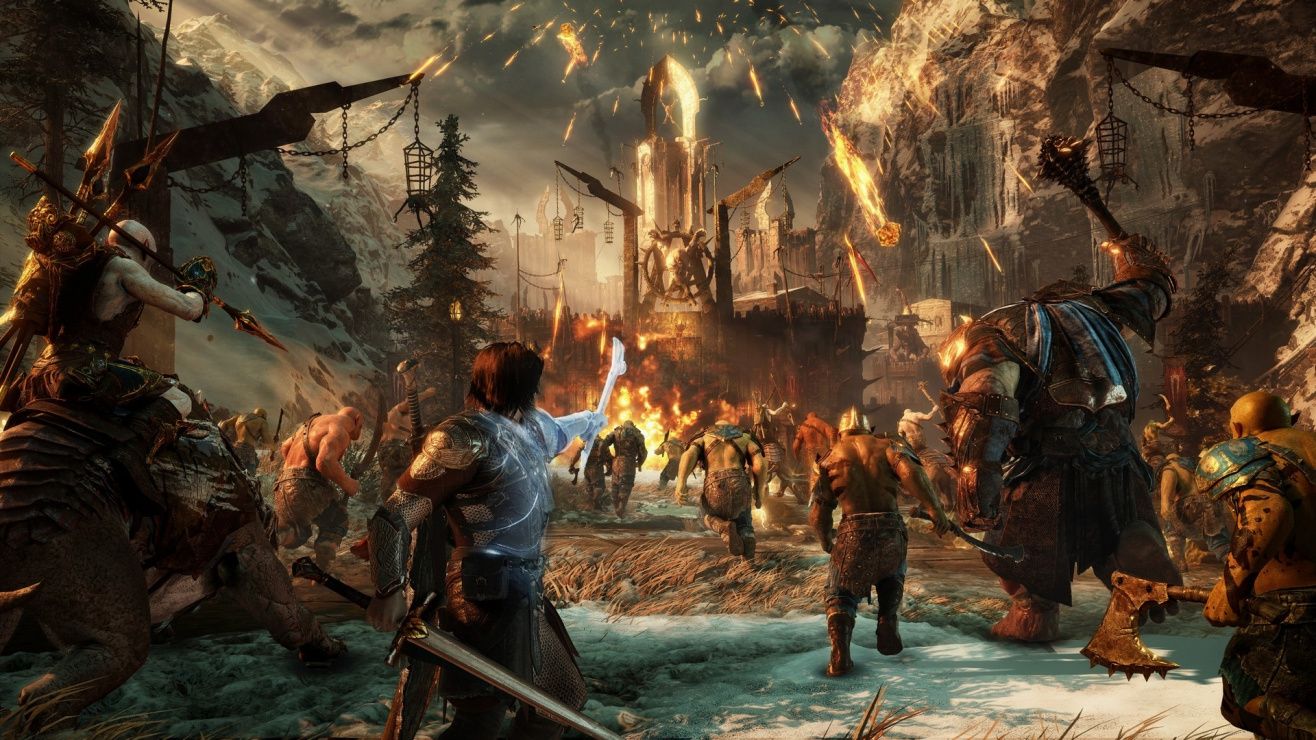 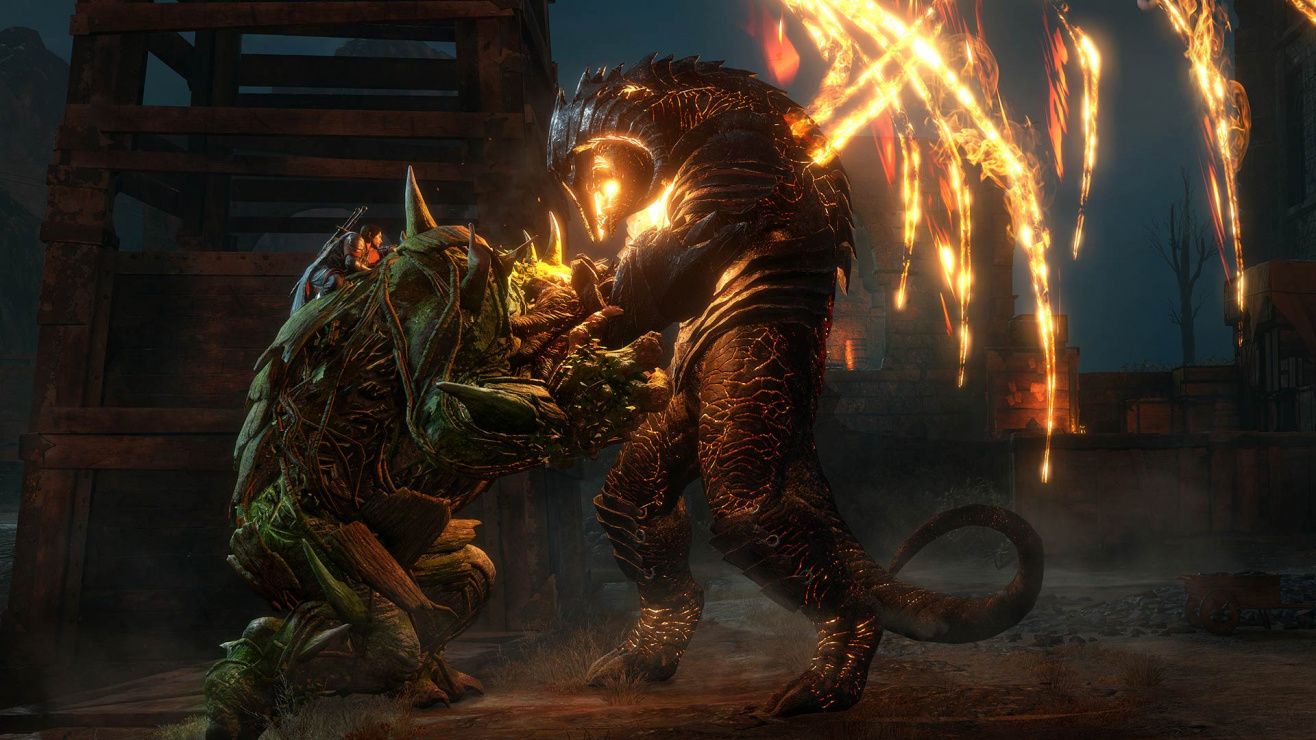 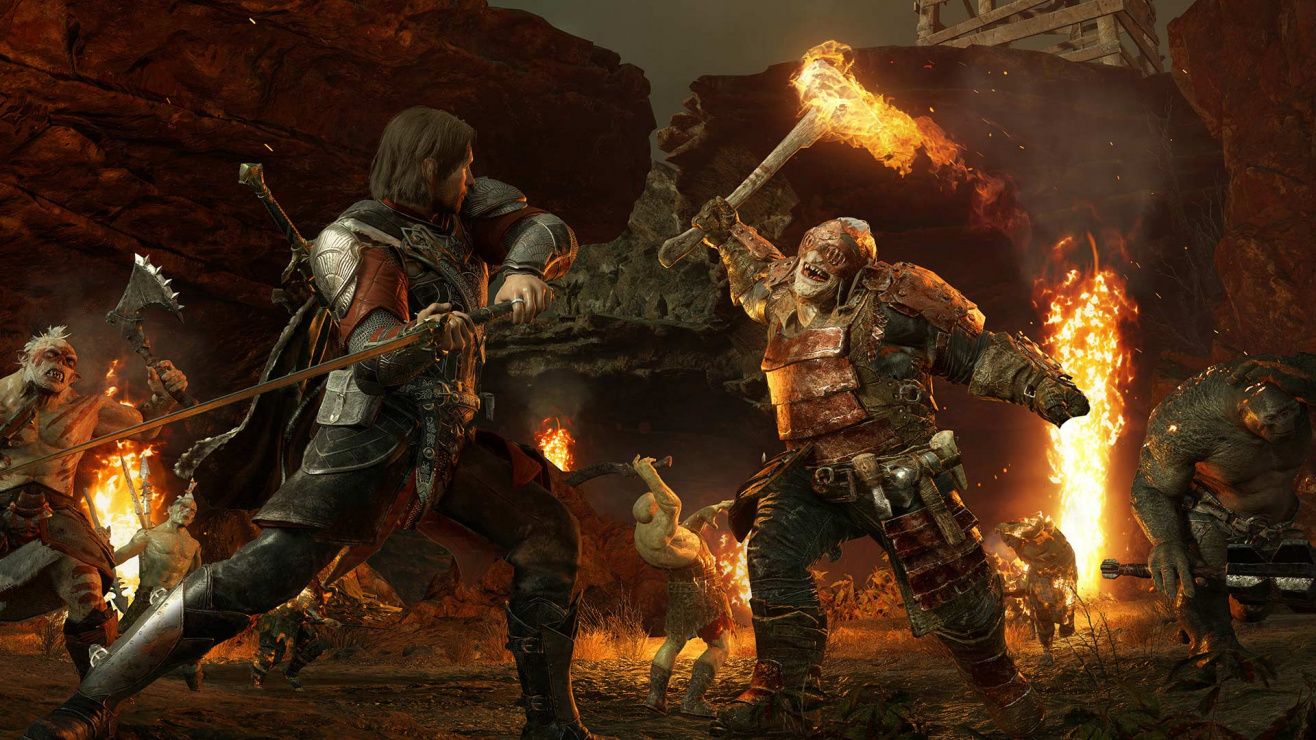 action adventure atmospheric fantasy magic role-playing rpg slasher stealth violent war
Middle-earth: Shadow of War is an action role-playing game set in an open world environment and played from a third-person perspective, following from its predecessor. The player controls the game's protagonist Talion, who has several natural athletic and combat abilities as a ranger of Gondor, but also has unique abilities provided by the spirit of the elf lord Celebrimbor, with whom he shares his body. The player uses their combined abilities to complete various missions, typically aimed to disrupt the armies of Sauron. The game includes main quests that drive the game's narrative, and numerous optional quests that can help the player boost Talion's abilities and Followers via the game's "Nemesis System". In contrast to the previous game, which was more of a hack and slash, the game has an action role-playing approach, creating a more personalized experience for each player
Share Share Share
Promote for 50G

Middle-earth: Shadow of War is one of my favorite games of all time for one massive, outstanding reason.
The Nemesis System
To this date, I have yet to encounter anything as dynamic, fun, unpredictable, and exciting in a story driven combat game as the Nemesis System. I have over 300 hours in Shadow of War, and out of that 200 hours were spent after I had completed the main campaign and 2 DLCs, completing every collectible and questline. 200 hours after the game was essentially "completed".
The experience of how your character interacts with the uruk enemies and how the enemies interact with you and each other is simply spectacular. An example out of dozens I could give: I return to Nurnen after several tours of duty in the other provinces, holding off numerous sieges and having to replenish and restructure my army's ranks. Upon my return, I face an all out insurrection in my ranks. Three of my captains and a warchief all decide to betray me in a coordinated ambush to start a full-on UPRISING against me. In the process, they bring one of my still loyal captains out and kill him in front of me. In total, I've just lost 5 captains in an instant and gained 4 new enemies. The next 2-3 hours were spent systematically hunting down every one of these traitors and punishing them in different ways.
One I outright killed in the first battle. He got off easy. One I forcibly re-recruited and demoted. The other 2 I shamed into absolute despair. One's mind broke and I killed him, only for him to cheat death and return for more punishment. The last one I forcibly recruited so I could execute him by making his head explode. Through all this, I put the fear of Mordor through the rest of my ranks, and there has yet to be another uprising like that since.
The orcs (uruks and ologs) remember everything that happens to them. They remember if you threw them off a cliff or burned them. They remember up to a point how many times they've killed you or how many times you've had to run from them. They even call each other by name and have rivalries and alliances within their own ranks. Sometimes a warchief will step down from his high place to defend one of his favorite bodyguards. Sometimes an assassin will track you from one province to another and ambush you when you least expect it.
And the best part? None of this was scripted. All of this happened after the main campaign was long, long over. The Nemesis System rewards the creative and adventurous player with amazing encounter after another.
If you're a fan of Lord of the Rings fighting and stealth games.
If you like exciting and interesting AI enemies with personality and unpredictable behaviors.
If you're a sick bastard who enjoys killing, torturing, and mind controlling the evil.
Look no further. Buy Shadow of War.

What I love most about this game is that your encounter with every single orc has the potential to turn into an epic story.
There was this time when a berserker decided to bury his axe into my stomach, and he was promoted to a captain. Upon respawning, I decided to track him down and re-arrange his face with my sword. Our brief encounter ended with him being thrown off a ledge and falling to his death, I thought nothing of it at the time.
Little did I know I would encounter that same orc time after time again, the dude just wouldn't stay dead. Regardless of the injuries he sustained, he would always be back. I recognised this orc's admirable endurance for punishment, so naturally I decided to dominate him.
He served as my bodyguard for many hours, and we went on countless conquests together. We attacked and defended forts, cut down enemy captains whilst adding others to my army. This orc began as a grunt, and has risen through the ranks, becoming a captain, an epic captain, and finally a legendary warchief. His bloodlust seemed endless, and unfortunately that was the case.
Recently I was wandering around Gorgoroth and tracking down an enemy captain. The fight was brutal but eventually his head was separated from his body, and his supporters fled. I was low on health and learned a valuable lesson moments after as my favourite orc decided to betray me.
Perhaps it was my fault, I'd aided this orc in all his encounters and made sure he was victorious. I assigned him as a warchief, helped him become legendary, and inadvertently deluded him into thinking he could take on the Bright Lord.
His followers were slaughtered, and I regretfully executed the masterpiece I had created. Or did I? Perhaps he survived his fatal injuries like all the other times. If so, I look forward to introducing him to my Drake.

Genuinely one of the best games I've ever played. It starts out a little boring, since the only thing to do aside from the main story is killing orcs, but once you reach Act II, the game really picks up, since it allows you to have many interactions with the same orc captains, and form relationships with them.
The combat is fluid and fun enough to keep the typical person entertained through Act I, but it's not really what the core of the game is. The core of the game is the Nemesis System. Basically what the Nemesis System does is that when an enemy kills you, they get more powerful, but more than that, they remember that they killed you. Not to mention that your enemies can occasionally cheat death if you kill them, and they'll remember that you killed them, so they'll come back with a figurative axe to grind and a literal axe in their head. I feel like the best aspects of the Nemesis System could best be demonstrated through stories.
One of my late-game nemeses was Zoruk Runnybowels. Yes, his name referenced his diarrhea, trust me, he was more intimidating than he sounds. He was the bane of my existence throughout Gorgoroth, but eventually I got together a team of 3 of captains that worked for me, and sent them all to murder Zoruk dead. We succeeded! Then he cheated death almost immediately, and went right back to kicking my ass, except now it was personal for him.
He killed me, and that's when I discovered that he had killed me so many times he got promoted to Warchief. I could draw him out in a warchief mission, but instead I continued building my army. I eventually had an army whom's strength I trusted, and we went to capture the fortress. This was where I finally put an end to Zoruk Runnybowels. We captured the first of 4 victory points, guarded by Zoruk, and he began running to protect the next point. I would not allow this.
I shadow-strike pulled him back to me, and we participated in a 1v1 battle. I actually even killed some of the grunts who came to help me, because I felt that would be unfair to Zoruk, and I wanted him to know he lost. In a video game. I felt like I had something to prove to an NPC.
Since we'd already captured the victory point, no grunts came to help Zoruk either, and I managed to bring him down to zero health. He fell on his knee, and I was prepared for the coming QTE to land the finishing blow, when he started giving a speech. I don't recall exactly what he said here, but I'm just gonna say he quoted Thanos and said "You should have gone for the head." He got back up, revealing he had the Death Defying trait, and by now he had adapted to most of my different types of attacks, so he kicked my ass.
I tried a second attempt to capture the fortress, and things went similarly at first. We captured the victory point, I got a 1v1 duel with Zoruk, but instead of bringing him down to zero health, once he was broken I grabbed him. Since we were in Gorgoroth, there was a river of lava running right down the streets of the fortress, so I tossed Zoruk into the lava.
I went on to capture the fortress, and finally breathed a sigh of relief, knowing that Zoruk was finally gone... Until he cheated death again, coming back as Zoruk the Flame of War. But that's a story for another day.

I was fighting with some PITA enemy captain who was immune to vault/execution/poison/flame. I was swarmed by minions and also got ambushed by 2 other enemy captains. I made a mistake and I was nearly killed but avoided death by the last chance mechanism. Just as I was going to strike the final blow, I mistakenly pressed spacebar and tried to vault over the goddamn captain. Not surprisingly, he pushed me off and immediately countered me. My health bar depleted to zero and I collapsed on my knees. Just as I was watching helplessly, him raising his spear to deliver the final blow, suddenly A GIANT TROLL appeared behind me, grabbed the enemy by his head, lifted him to waist level and just like the Mountain squashed the head of Oberyn Martell in GoT, my bodyguard, WHOM I DID NOT CALL UPON, painted me with the enemy's bashed skull pieces and brains, alongside with blood.
As I got up, he turned to me and said "I AM ALWAYS HERE WHEN YOU NEED ME BOSS, WHETHER YOU CALL ME OR NOT".
That's why I love this game. The amount of epic moments, the randomness, the fun, the humor and the gore. This game has an insane replay value, no encounter is the same as the previous one. They really nailed to create a really dynamic world and random encounters all throughout the game.
This is why I play this game when I need to blow off some steam, when I have limited time to play. This is the Shadow of War!

Shadow of War in 2020 deserves some love and with the micro transactions gone nemesis system is now fun and recruiting orcs, developing orcs is now more fun than ever.
The low resolution textures issue was fixed with the ultra texture pack and cinematics look good with the 4k cinematic pack. I had fun returning to this game on PC previously played on xbox one x

The amount of replaybility with so many unique orc personalities....is just astounding.
300 hours ...and I am still not bored.