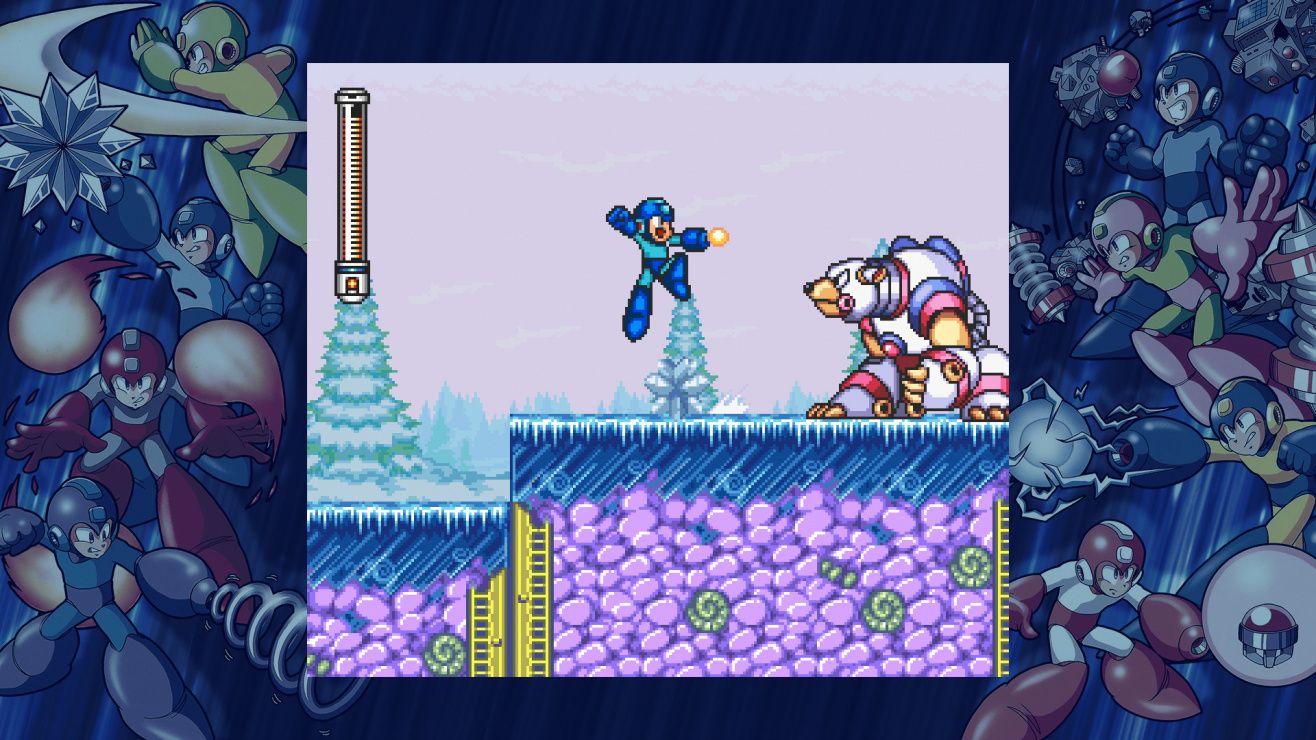 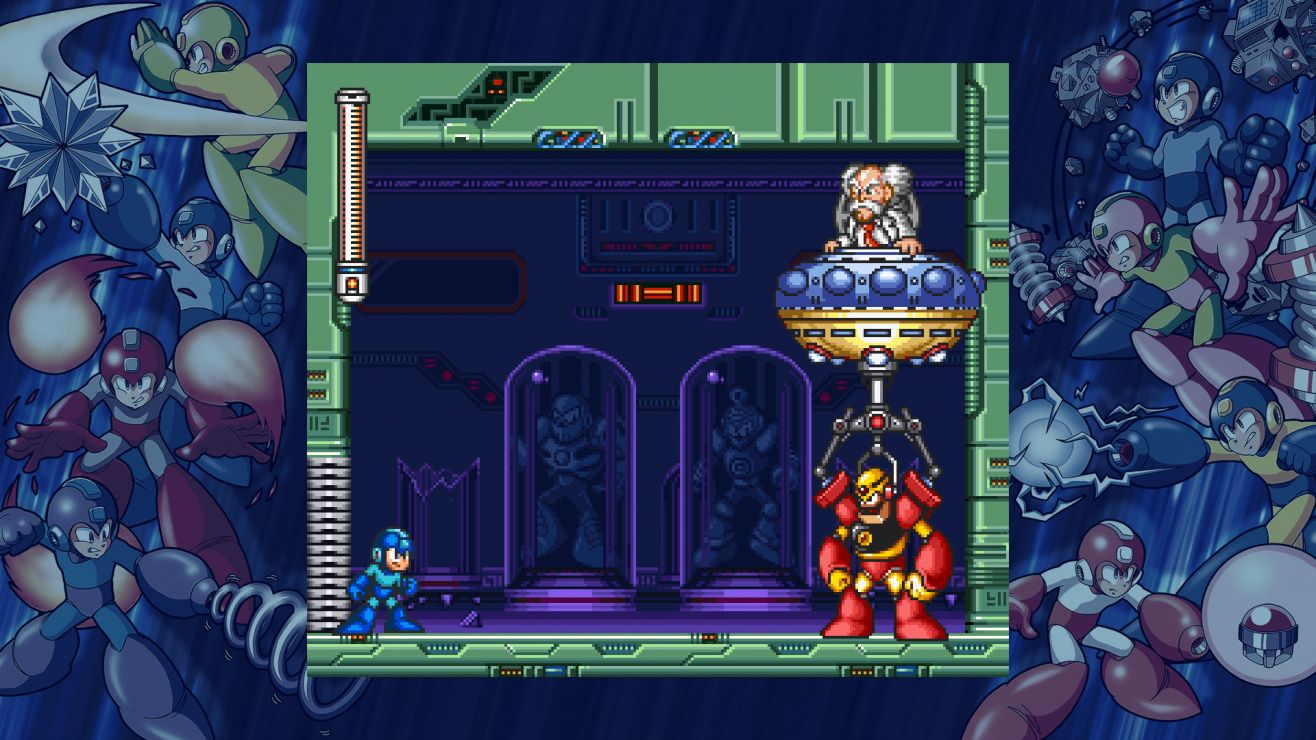 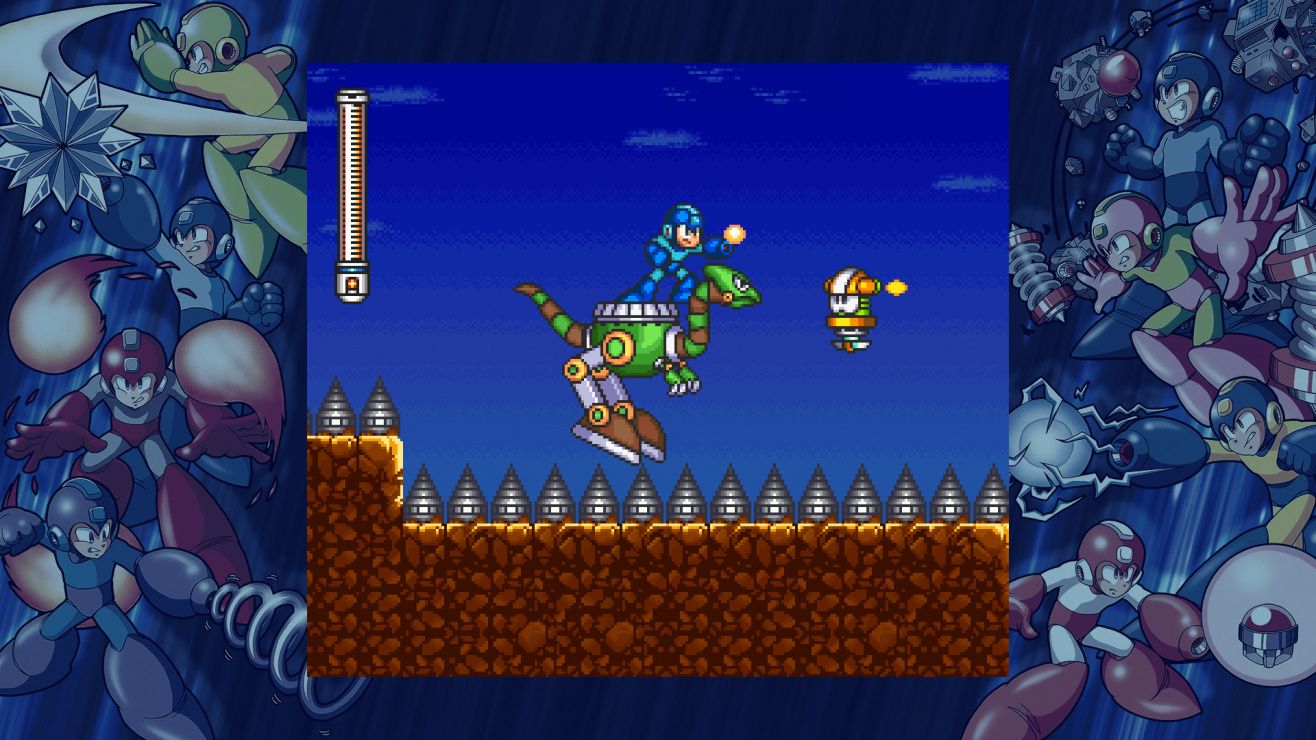 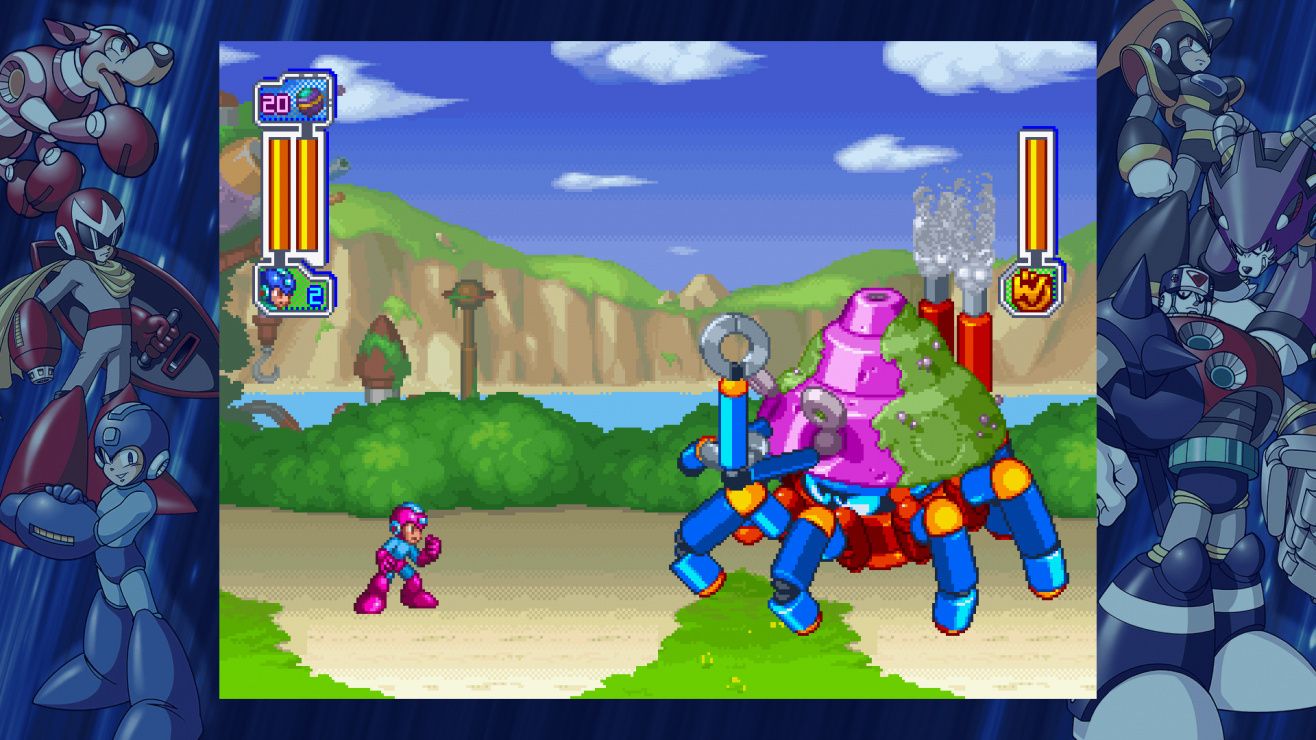 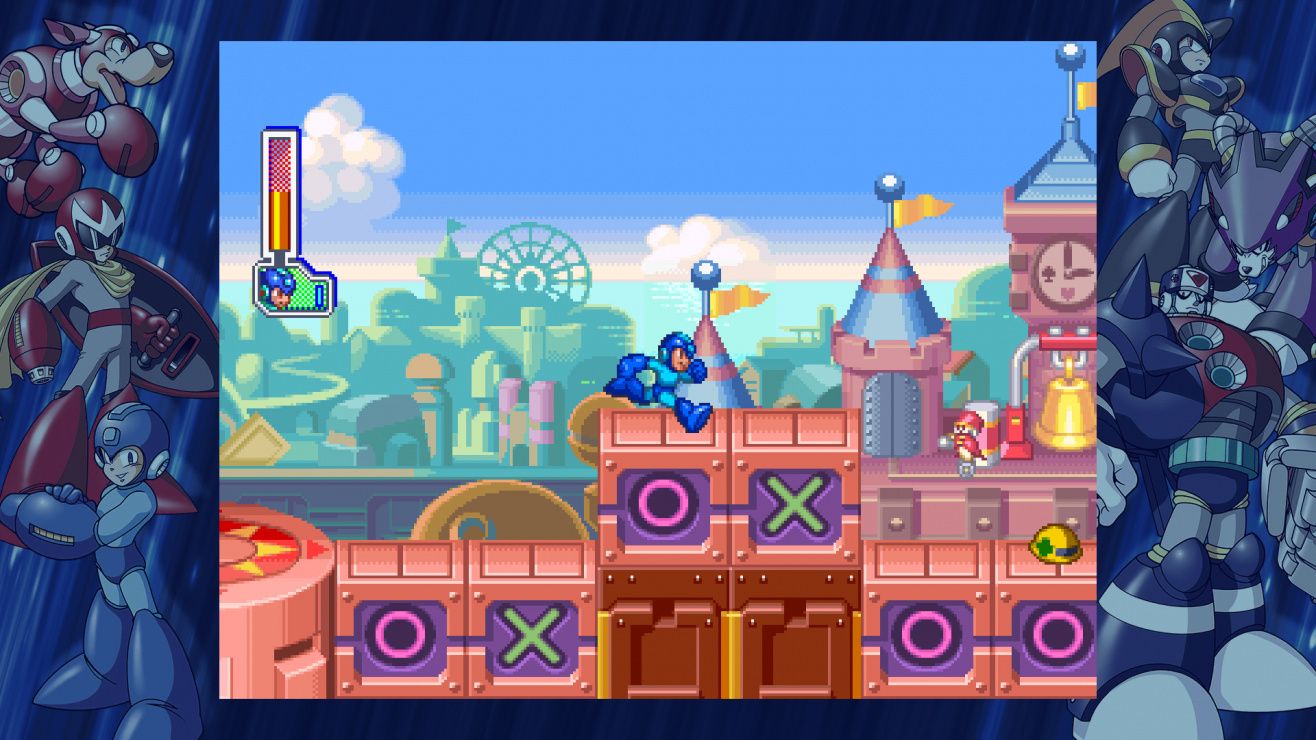 PC Steam Console Playstation action Xbox Nintendo singleplayer platformer 2d fun classic great
The Blue Bomber is back in this second collection of classic Capcom titles! Featuring faithful reproductions of Mega Man 7, 8, 9, & 10, this collection spans the iconic series' evolution and retro revolution. Take on the nefarious Dr. Wily and his diverse Robot Masters in these timeless 8-bit, 16-bit, and 32-bit adventures! Mega Man Legacy Collection 2 is bursting with additional content, from time trials and remix challenges with online leaderboards, to a music player and an extensive gallery of rare illustrations. Also included are the additional modes originally released as DLC for Mega Man 9 and 10, featuring extra stages and playable characters. For anyone who wants a little extra help with these challenging classic platformers, you now have the option to reduce the amount of damage received.
Share Share Share
Promote for 50G

Here’s part 2 of the Legacy Collection, featuring the games from the SNES and PSX consoles, then a nostalgic return to the 8-bit era. Is this collection just as solid as the first? Here’s my feedback.
The GoodAble to play Mega Man 9 and 10 on Steam.
On a consumer’s point of view, Mega Man Legacy Collection 2 provides PC gamers access to Mega Man 9 and 10, which saw releases on the digital marketplace on consoles in 2008 and 2010 respectively, but never on PC.
It’s funny how the PC platform had to wait almost 10 years before the 2 games would be accessible, but the wait was worth it, considering that both of them carry all the bonus extras from their console counterparts. The extras include being able to play as Proto Man in Mega Man 9 and Bass in Mega Man 10, as well as a handful of challenges and extra stages.
The BadHigher asking price to first collection, but only has 4 games.
Another consumer point of view to have on this collection is the fact that it only has 4 games and it’s current asking price is more than the previous collection, which contains 6 games.
Some could make the argument that there’s extra value to be had in Mega Man 9 and 10, as I highlighted in the Good section, but for those that play it only once as the blue bomber, the overall value might be a bothersome sore for consumers.
The UglyAudio balance problem; no option to adjust it.
An issue that I noticed in this collection is the audio balance that’s setup. It’s very bothersome, as the SFXs are louder than the BGM to where it can get drowned out at times. This issue is very apparent when playing Mega Man 8 and there’s no option to adjust it in either the individual games or the main menu.
It should go without saying that if you want to play the rest of the Mega Man games, you can’t go wrong with this collection. The only thing I’ll advise is getting it during a sale, so you can get more bang for your buck.
Developers (Headquarters)
Capcom (Osaka, Japan)

MEGA MAN VII: 8/10
I played this game a ton as a kid, and I rage-quit the final boss and called it "beaten" on a couple occasions, but this is finally the time I've actually defeated Wily's final form. My gosh.
Like with 6, I liked this one as part of the Legacy Collection a lot more than I did as a kid. The graphics and level design are fantastic for 1995 SNES -- the only downside, I think, is this game could not compete with the X series. Also like 6, the levels are packed with secrets and power-ups and ~~bolt cash~~ to grab for an upgrade shop. And, again, like 6, the bosses -- except for Wily 2 goshdang he's so freakin' hard it's ridiculous, easily the hardest thing in all of Mega Man history -- are challenging, but easy enough to learn and master without relying on spamming their weakness or the RNG of whether they'll jump into your face or not.
MEGA MAN VIII: 7.5/10
Like 6 and 7, I liked 8 much more on a replay than I did years ago, when I agreed with those complaining about the formula being tired in this game. The bosses are once again *fantastic* and a joy to fight -- although, aesthetically, I'll agree they seem weak this time around (*shudders at the thought of Clown Man; rolls eyes at the appearance of Search Man*). The graphics feature gorgeous pixel art -- more gorgeous with age, tbh, than on release when we all craved for 3D.
The levels are much more expansive and lengthier than in the earlier games. Generally, they're pretty good, too, but there are a few stinkers: Clown Man's stage is as boring as the character design; the early Wily Castle levels are excruciatingly difficult with lots of RNG. Fortunately, MM8 is easier in other ways than past games to make up for some of the unfair deaths.
MEGA MAN & BASS: 6/10
N.B.: Not included here, but this is where it'd go in this collection. :)
Play as Bass. This game is meant to be played as Bass.
I have desperately wanted to play this game since first trying out an untranslated rom back in the early days of the Internet. It's a mess -- half classic, half aggravating disaster.
The highlight is absolutely playing as Bass -- his unique gameplay, including a double jump, multi-directional aiming (praise be!), and an X-like dash, is some of the best in the classic series, and is far more fun than even Mega Man plays here. Level and boss design, however, range from everything you'd want from a new Mega title, to a rage-inducing dumpster fire. Burner Man takes the cake for unfair, RNG bullhonkey, although Dynamo Man comes close -- honestly, these two might be my least favorite bosses of *any* Mega Man title. The final gauntlet is excruciatingly difficult, too.
Two bosses, Tengu Man and Astro Man, are weirdly recycled from Mega Man 8, which, OK, sure, the story behind MM&B is it's a bit of an intentional asset-flip of the PSX title (most of the regular level enemies are definitely asset-flips...even the dreaded assets of Clown Man's stage show up...eugh), but the recycling of only 2/8 bosses seems...weird.
The music stinks for both Mega Man and Capcom, featuring short, looping melodies with no clear themes anywhere.
Such an unfortunate miss. Weird to think of this as the worst in the classic MM series, even though it features some of my absolute favorite moments.
MEGA MAN IX: 9.5/10
Holy bananas, Mega Man 9 was such a perfect throwback. I have such fond memories of this game's release -- one of those first truly nostalgic throwbacks, back when most everyone just cared about attaining photorealistic (bloom-y, shiny) graphics, this game was truly refreshing in its simplicity.
I don't really dig the idea of dropping the slide and the charge shot, but, you know what? it works; it doesn't matter. This game is perfectly built around the classic Mega Man 2 mechanics.
But gosh DANG is it hard. It might be the hardest Mega Man title, period. Everything is doable once you learn the patterns, but you will die a million times trying to get those patterns down. Thank gosh for the Legacy Collection's checkpoint system. Not sure I can fathom another few nights dedicated to taking on Wily's entire castle with limited lives.
MEGA MAN X: 8.5/10
9 and 10 are an amazing duo of games. I think 10 is only hurt for having the shine diminished by 9's on-release novelty.
(That and, small complaint, 9 finally introduced a female bot and this one surprisingly...steps back from that.)
Inti Creates is so danged good at creating finely-crafted platformer levels, perfectly fit to the Mega Man formula. Challenging as heck, just like 9, 10 features some of the series' hardest moments. The second Wily stage and, for me at least, Commando Man's stages had me tearing my hair out.
Love you, Mega Man.

A must have for any Megaman Fan, one of the most defining platformers in gaming history!

Like the first legacy collection, all these games are emulated great. I like the games in this collection more. I'm going to sum up each game offered here in 10 words or less:
Mega Man 7 - 16-bit perfection. Vibrant colors, awesome bosses, lots of polish.
Mega Man 8 - This one's.... alright. Looks great, but stages are too long.
Mega Man 9 - Perhaps the best Mega Man game. Back to the retro style.
Mega Man 10 - More of Mega Man 9! New characters and difficulty selection.

I bought this game for £12. I got 4 Megaman games for this much, and that's pretty cheap, which is a great thing. :D
I only just got to play Megaman 9 and 10 a few years after its first release back on wii. Each Megaman game takes between 5-10 hours to beat, with a little grinding for bolts to get all the powerups. Plus Megaman 10 has 3 playable characters, which in turn increases replay value (2 playable characters in MM9). These games are pretty well designed for newcomers or veterans (I have played Megaman 7 and Megaman 8 years ago back on gamecube), so parts of each game can be easy or hard. Oh, and the music is very good! Each soundtrack fits the feel of each stage. I can't think of one song in these games which sounds bad.
Another thing is I really like the designs of 90% of the characters. Most of them look cool (like protoman/bass) and some of the robot masters look comical and interesting.
I will say Megaman 8's English voice acting is kinda bad (eg Dr light saying "Dr wahwee" comes to mind), and I wish megaman 9 and 10 had SNES style graphics rather than NES graphics. I much prefer SNES far more than NES in my opinion (especially since SNES is my favourite system!). My last issue with these games is spikes are very annoying. I often think "What is the point in having a health bar if you die in one hit to spikes?"
If you think Megaman games are hard, simply turn on super armour mode to take half damage. However, spikes are still instant death, so watch out!
Certainly recommend this collection for the cheap price. Hoping for MegaMan battle network collection!