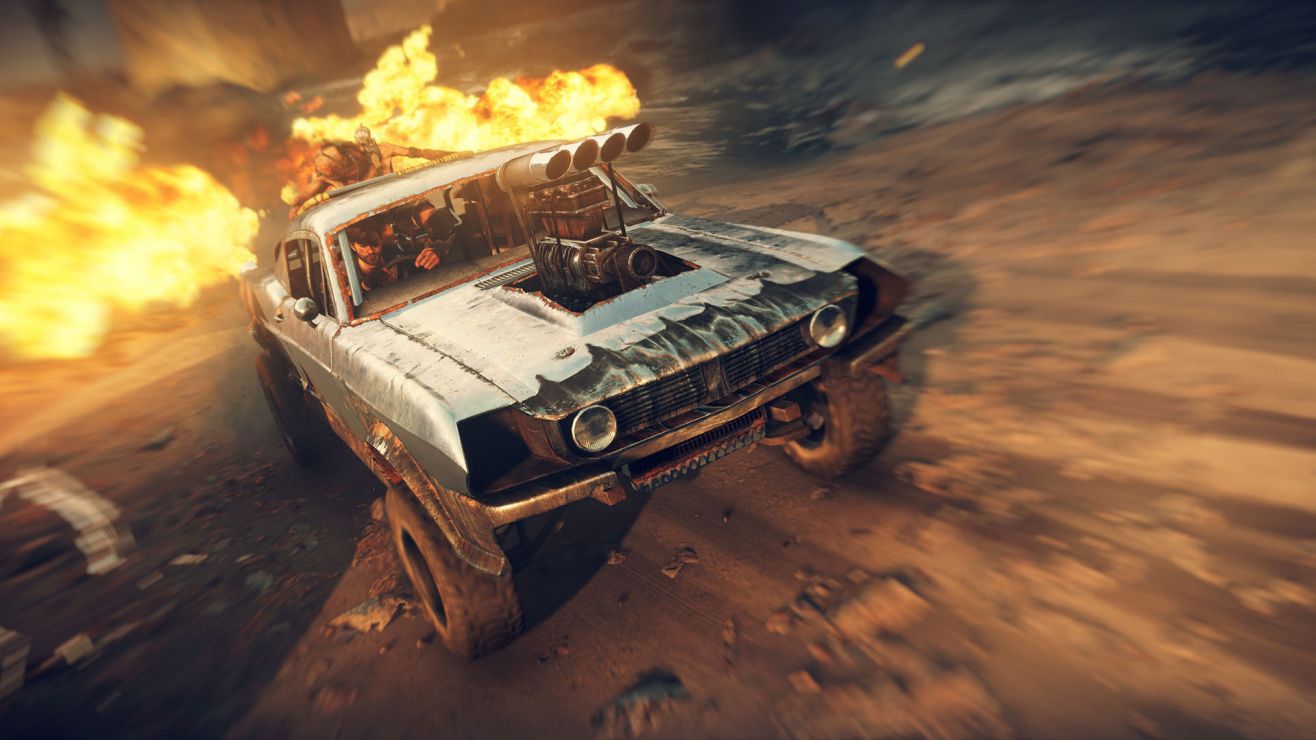 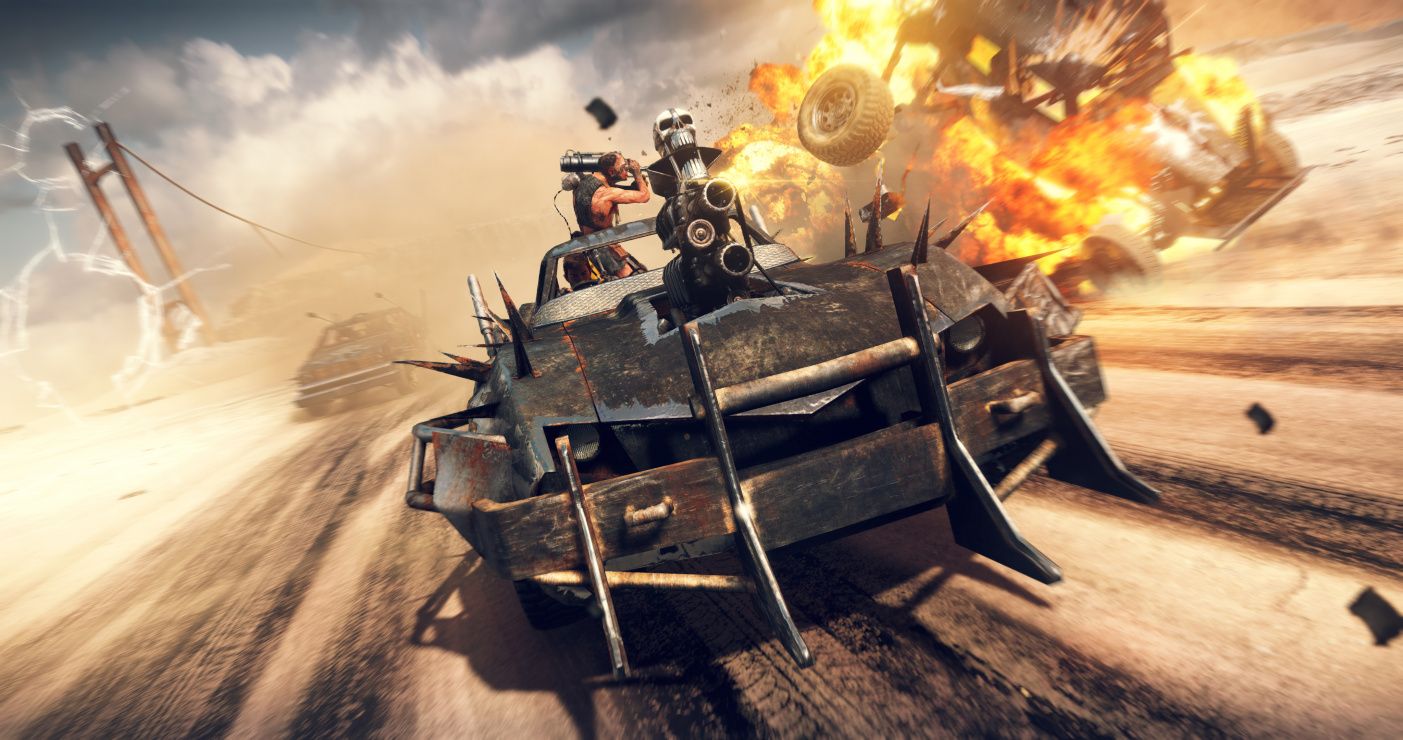 PC Steam Console Playstation action Xbox cars adult blood post-apocalypse brutal warrior
Become Mad Max, the lone warrior in a savage post-apocalyptic world where cars are the key to survival. In this action-packed, open world, third person action game, you must fight to stay alive in The Wasteland, using brutal on-ground and vehicular combat against vicious gangs of bandits. A reluctant hero with an instinct for survival, Max wants nothing more than to leave the madness behind and find solace in the storied “Plains of Silence.”
Share Share Share
Promote for 50G

Games about movies are always a bad idea.
This is one of those rare exceptions

Please make a 2nd one.

I love this game. Played it on PS4, bought it again on PC to have an excuse to 100% it all over again. My love is due in part to pure bias; I’ve always been a huge fan of the Mad Max films and their world. You could argue that the game is super repetitive and that the story is not great… and you’d be right. So what makes Mad Max good?
For starters, THE most beautiful desert environment I’ve ever seen in a game. Much like Fury Road, the colors are bright and vibrant despite the crumbling buildings and rusted vehicles. Light and shadow and the way they shift across The Great White during the day/night cycle is really something to behold. I was afraid I would get bored with an open-world game with a desert setting, but not so. The canyons, the dunes, the dried up coral reefs. The few remnants of the old world (ships, lighthouses, airplanes) feel nearly as colossal as the desert. Driving across the landscape with Gastown growing ever closer in the distance. The WEATHER EFFECTS. The massive storm in Fury Road that looks like a fiery inferno with lightning inside of it? It’s back bayyybeeeee. It strikes at random so watch your ass.
Mad Max films have always had interesting mythical elements. In this game, we have the strange ghostly shaman-type character, Griffa. He serves as your means to upgrade Max’s abilities, but who or what is he? He looks and sounds like the actor who plays the gyro captain in Road Warrior/Jedediah in Thunderdome, so the game continues that strange trend of ‘same guy, unrelated characters.’ Griffa asks Max questions like “Where are you?” and “How old are you?” and Max doesn’t have a clue. And neither do I, and neither does anyone, because Max himself is also a mythical character. I love that this game sticks to that.
In many post-apocalyptic games, you’re very alone. In this, you get a wasteland companion. Well, two, if you count The Dog/Dinki Di (who can’t remain with you at all times; he’d get in the way). I’m talkin Chumbucket. Sure, he’s a chatty little Gollum-type weirdo who likes to shove his tools up his ass, but I can’t deny enjoying his enthusiasm. His hootin n hollerin whenever I did a sick jump or hit a great speed or smashed another car into smithereens -- SAME, bro! He’s your high-octane hype man. Plus there’s good reason for his presence, plot aside; repairing your car, driving it to you when you’ve left it far away, manning the harpoon, etc. It’s a brilliant move to give Max an assistant, as it prevents gameplay interruptions. The animations for the way Max and Chum effortlessly slip and slide around the Opus whenever you switch between your tools allows gameplay to flow like water.
The fighting animations are fantastic, too, especially once you’ve unlocked all of Max’s CQB moves. Max is a brawler who fights dirty, but the finishing animations alone make him feel like an unstoppable powerhouse. It’s so satisfying and fun.
Character designs are incredible and well-considered. Chum’s design, for example, reflects his utility. All of his tools, including his wrench, the fire extinguisher and air compressor for the harpoon, are visibly kept on his person. His suspenders are made from car seatbelts, his kneepads made from tires. A design that echoes his duty and passion. The warlords arguably have the best (most disgusting and depraved) designs and I could talk about them til the cows come home, but I won’t.
Driving itself, just driving, feels so GOOD. Flying down an empty road at night, hearing the wind whip across the car, it rules. You’ve got some rough terrain to drive through (mud, oil, sand), but upgrade the Opus enough and you can nitrous boost yourself into the damn sun, NOTHIN can stop you.
There are some valid gameplay complaints that can made about this game, and repetition aside, most of them are only glaring if you are trying to 100% the game, so I won’t bother to mention them. I do however have one major complaint that a lot of people might not bother to make: I don’t care for this game’s Max. Fine, have a mediocre story, but give me a good Max.
This Max is so effin bland. He looks and feels like an NPC that ganked Max Rockatansky’s jacket and Interceptor and then paraded around as him; an imposter. While Mad Max typically isn’t about MAX, Mel Gibson and Tom Hardy still delivered memorable performances within the constraints of a main character that doesn’t have much dialogue and is generally pretty neutral. I guess it requires some finesse and subtlety in the writing that this game simply doesn’t have. At the climax of the game, Max’s emotions go wildly out of control, very much a mirror of the ending of Mad Max 1, but there’s no reason to see that again. He only needs to go “Mad” the one time. ONE. Every follow-up film ends on a very hopeful note and I expected the game to follow suit. The game’s story and resolution don’t benefit from the events that transpire and after such an epic road trip, it felt like a really crummy note to end on. It’s a shame when an entire experience is somewhat soured by a dookie ending.
Anyway thanks for coming to my Ted Talk, I give this game a 9/10 and it probably deserves a lower score but IDGAF adieu

The gameplay, the eerie silence, mystery and the post apocalyptic world is so beautiful that after spending 60hrs in this game in 2016, I am re-installing it in 2021 to feel the same.