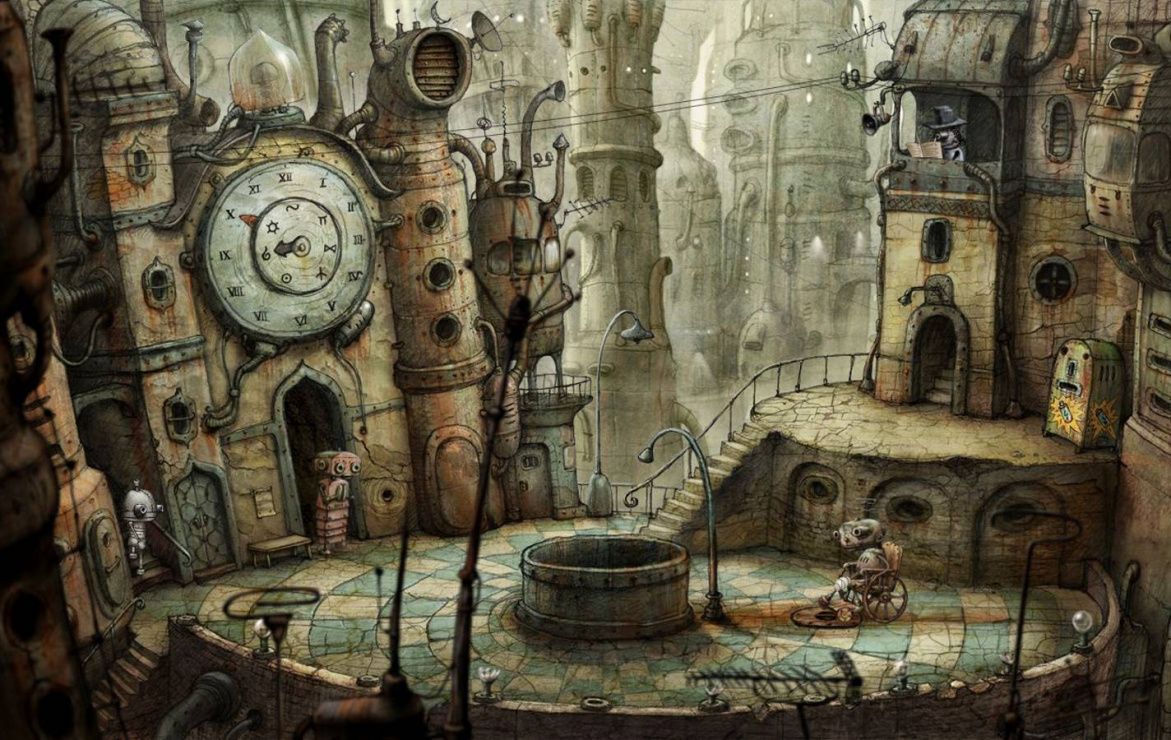 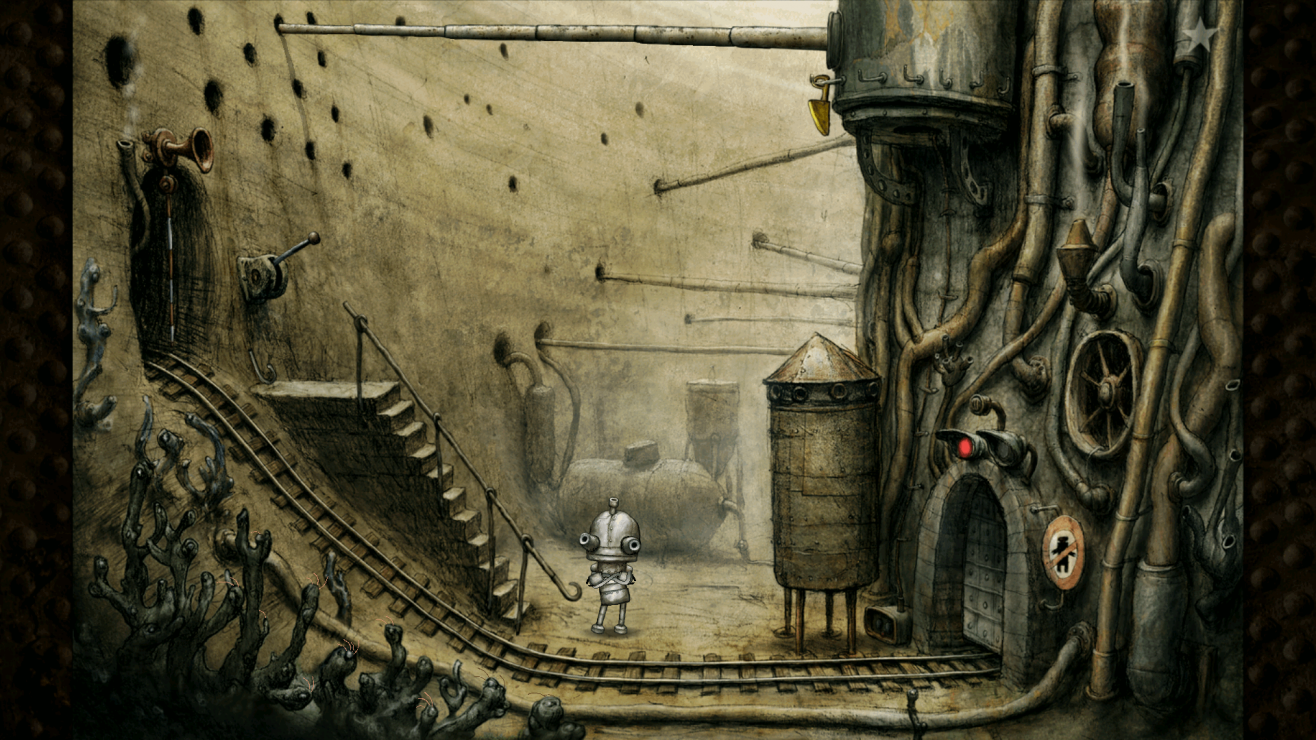 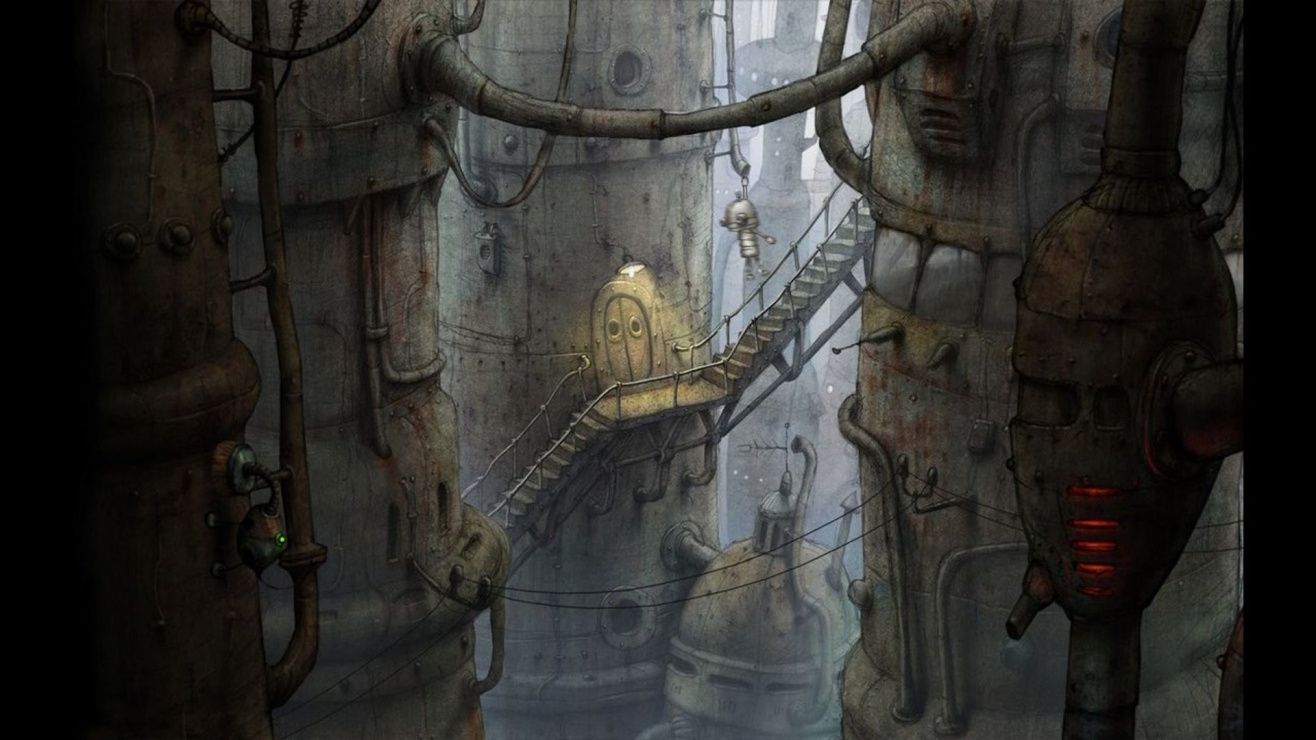 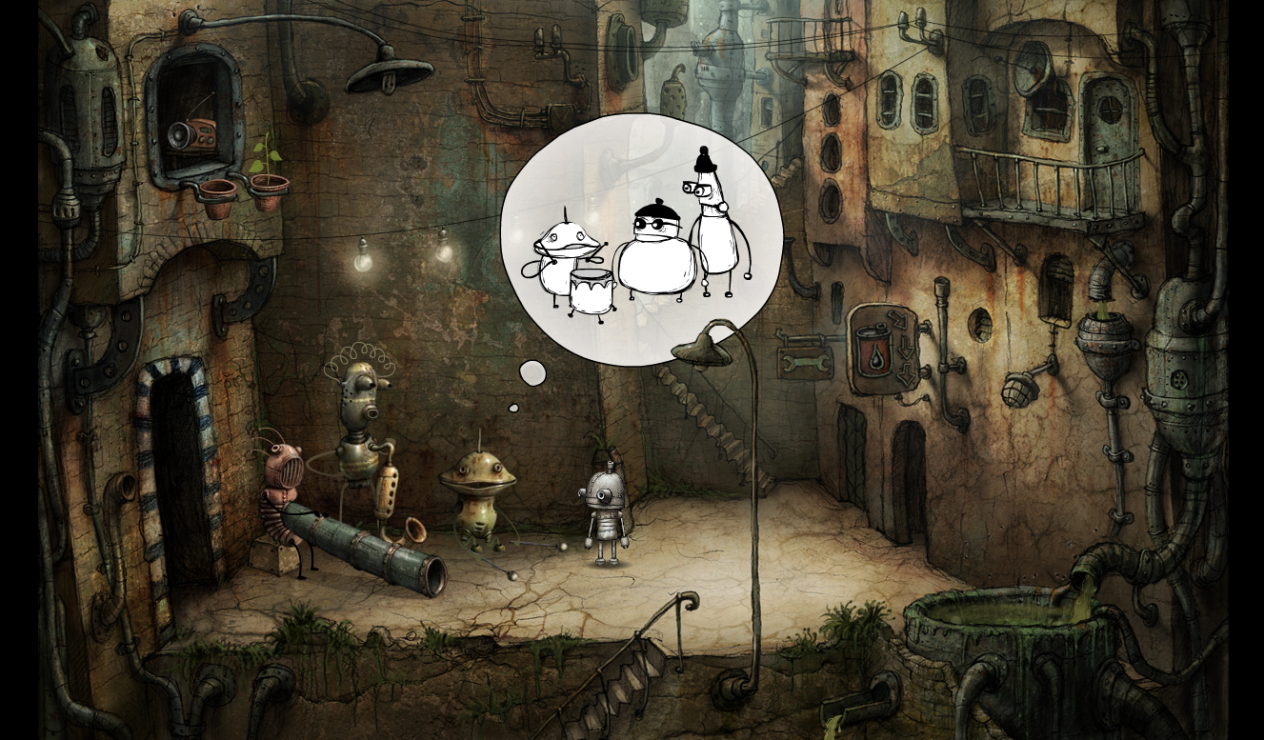 adventure art atmospheric casual indie puzzle quest robots story
Machinarium is the award-winning independent adventure game developed by the makers of Samorost and Botanicula. A little robot who’s been thrown out to the scrap yard behind the city must return and confront the Black Cap Brotherhood and save his robot-girl friend.
Share Share Share
Promote for 50G

Machinarium is one of two games, that was also played by my wife, who is somewhat not a gamer at all, she got deeply engaged with story and cute art and of course the funny and really tough puzzles, actually I had to complete some challenges for her, but still..
It's a beautiful game, and if for some reason you missed it, make sure to grab it and give it at least few evenings!

An oldie but goodie - for the ~5 hours for my playthrough, I enjoyed my time spent in Machinarium. Recommended for some casual time-killing. I played it as a break from more intense games.
Gameplay
Machinarium is a straightforward point and click game. I liked how the main character can extend and shrink, which adds an element to the puzzle. For example, if there's an item you can't reach at the normal height, sometimes you have to realize you have to extend the main character to reach the item.
The puzzles I'd say are of middling difficulty, being an occasional point and click game player. The developers have put a nice touch of illustrated walkthroughs, right in-game! (I just looked up screenshots of them on the Steam community, one of the guides has all of the screenshots for convenient access.)
Now, even with occasional looking at the developer walkthrough when stuck, it still took me ~5 hours to complete the game, so I'd say go for it unless you're trying for some perfectionist run. All the achievements are mandatory if you complete the game, i.e. none are missable achievements, so it's not a big deal to avoid all guides.
Experience overview
As this game is made by Amanita Design, it has their signature art style, which is a treat to the eyes. Even after so many years, the graphics still hold up as unique and paints a fascinating world. The music, in typical Amanita Design games quality, is whimsical and has a flavor of its own. So I know that with these two aspects, I'm in good hands when it comes to an Amanita game.
The main story isn't that interesting, and I'd go as far to say it's pretty generic. But I enjoyed exploring the world of Machinarium and some of the NPCs have more interesting background, though it's left pretty ambiguous in the game. So I'd say I enjoyed the art and music direction, just enjoying the environment, and the story was more in the background.
Conclusion
Overall, Machinarium is a game that still holds up graphically and is a high quality and pleasant experience, 10 years after release. There have been so many instances of it being on sale, so if you got it for cheap, it's worthwhile to play it when you're killing time or just as a break from other types of games.

A charming game that places an indefatigable and likable android protagonist in an overall melancholy and wistful setting of crumbling edifices, broken machines, and seedy robots. (Naturally, as developer of Primordia, I find this a very congenial setup.) The game has no dialogue or text, and it aspires less to high philosophy than to episodic cartoon travails, but this works quite well and doesn't overstay its welcome. Beautiful artwork and excellent music round out the charm.
The puzzles are more in the vein of a Flash game than a traditional point-and-click (frequently they are focused on a single room, and typically they involve minigame logic challenges rather than inventory-based problem solving), but they are fair and in some instances quite clever. I found the integrated hint system, which I used a couple of times, less than fully helpful.
All said, this is a favorite of critics and players alike for good reason -- it is a game with character and integrity, available for a song.

a Unique Masterpiece Of Visual Arts And Music.
This Surely Is a Game a Man Won't Forget.

I have a LOT of Nostalgia for Amanita games, I used to play Samorost 1 and 2 Machinarium and Botanicula a lot when I was very young and they were made in my country, so thats another thing to be proud of, unfortunately Czech Republic has stereotypycally a lot of piracy and Amanita games are pirated like crazy, when I played them back in the day they were the pirated versions, I did not even know they were pirated I just thought they were free games...So when I stumbled on my old favourites on the Steam page I bought them immidiately mainly because I kinda felt bad and I wanted to experience these charming worlds again.
So now to the review of Machinarium!
Machinarium is my favourite Amanita game. the puzzles are much more intuitive than in Samorost 2, the artstyle is still just awesome and music is top notch. This game needs a sequel, and there is a lot of sequel potential considering it is in the universe of Samorost. There are now achievements! (yay) and an interesting (and questionable in a sence of interesting lore possibility) hint mechanic in a form of a journal which basically depicts your upcoming actions on the screen you´re currently at that you have to unlock using a short (and nostalgic) minigame.

A little robot man living in a mechanical world must save his friends and neighbors from a group of nefarious local thugs. It has a simplistic yet beautiful art style with a lot of attention to detail. Despite being comprised entirely of robots, the game is quite expressive and has a lot of charm and heart. It's decently varied and somewhat challenging, and would likely appeal to seasoned point and clickers or casual gamers. It's now an old classic of the genre.
I would describe Machinarium's art style as a mix of sketchbook outlines with water color details. Most backgrounds are static paintings with a handful of moving components. It also has a surprising amount of character animation, mainly in the form of simple tweens and hand-drawn animatics. There's not a lot to say here, at least not much more than you could see in the videos and promotional material.
It is worth noting there is no spoken dialogue or text of any kind. Everything is conveyed using pantomime, sound bytes, and visual cues. Characters make occasional grunts of acknowledgement or discontent, but that's about it.
Plot-related details are illustrated using a large thought bubble that appears during significant moments. Usually, these clouds detail something that happened in the past, mainly centered around the bad guys and their continued harassment of the local populace. Despite being very rudimentary, they are extremely effective at conveying the plot.
In fact, you'll likely miss this detail, but if you leave the game idle for long enough, the protagonist will summon little nostalgic memories of him and his girlfriend. There are several of these, which are missable if you didn't know to stop and wait. These little wholesome animatics are adorable, and it's quite unfortunate that they are so easy to overlook.
Which brings us to the story. Josef, the protagonist, begins his journey after being dumped into a landfill. From there, he picks himself back up and puzzles his way back into his home city, while also going toe to toe with the local crime syndicate. You piece the story together using Josef's recollection of what happened before he was ousted.
You meet a colorful cast of characters, many of which who have had run ins with the aforementioned mafia, and subsequently lost something of value as a result. Josef goes around solving people's woes while also undoing much of the damage done by the bad guys.
For a game that is composed entirely of robots, there is an incredible amount of heart woven into this experience. Josef is quite expressive, and his flashbacks are both charming and moving. Each character's body language and actions convey everything from sadness, worry, joy, and terror.
Some games struggle to inject emotion into their story, even with spoken dialogue, music, and complicated choreography. Here, simple animations and sketchy animatics provide immediate emotional feedback and narrative context while also feeling completely natural in presentation. I suppose less is more in this situation.
As stated before, the game features a wide variety of puzzles. Some are based on board games. A few are homages to classic video games. Others might even require pulling out a pencil and paper and drawing out the logic. Most, however, revolve around gathering items and using them in context sensitive situations.
One helpful feature when puzzling would be Josef's pathological need to throw away any item that no longer has a use. This happens rather often, and it's unlikely that you'll ever have more than three items at any given time as a result. This helps cut down on having too many options when solving an item chain. The moment something loses value, it's gone. It has a funny in universe implication, while also serving a gameplay practicality.
I would say the game is between easy and moderately difficult. Due to the varied nature of the puzzles, everyone will have that one puzzle that they get stuck on. Maybe it'll be the connect 5, or the arcade, or the pipe cutoff puzzle. The last puzzle, in particular, I had to look up, because I'm awful when it comes to music notes and audio cues. This makes it hard to really gauge overall difficulty.
It's worth noting that the game has a hint system and a hint book for you to unlock. These systems can be used to help guide you through the tougher spots. If the game gets too vague, you can always crack open a hint.
Finally, the game is roughly 4-5 hours long. For some, that's great, and for others, that's too short. Personally, I don't really think time is a good moniker for judging the quality of a point and click. Case and point, some of the old school Sierra games used to go on for weeks at a time, to the point they became excruciating to beat.
Here, I think Machinarium is just right in its length. A succinct story that doesn't drag its feet or skimp on content.
At this point, I would call Machinarium a classic point and click. Its minimalistic style combined with its expressive characters makes it a joy to explore. Its variety in puzzles is welcoming, while also being decently challenging. If you consider yourself a seasoned adventurer, then you should really pick this up. It might be good for casual gamers as well.
Steam Curator

This game will always have a special place in my heart. Thanks, Amanita, for the fabulous 10th anniversary gift and such a jewel of a game.