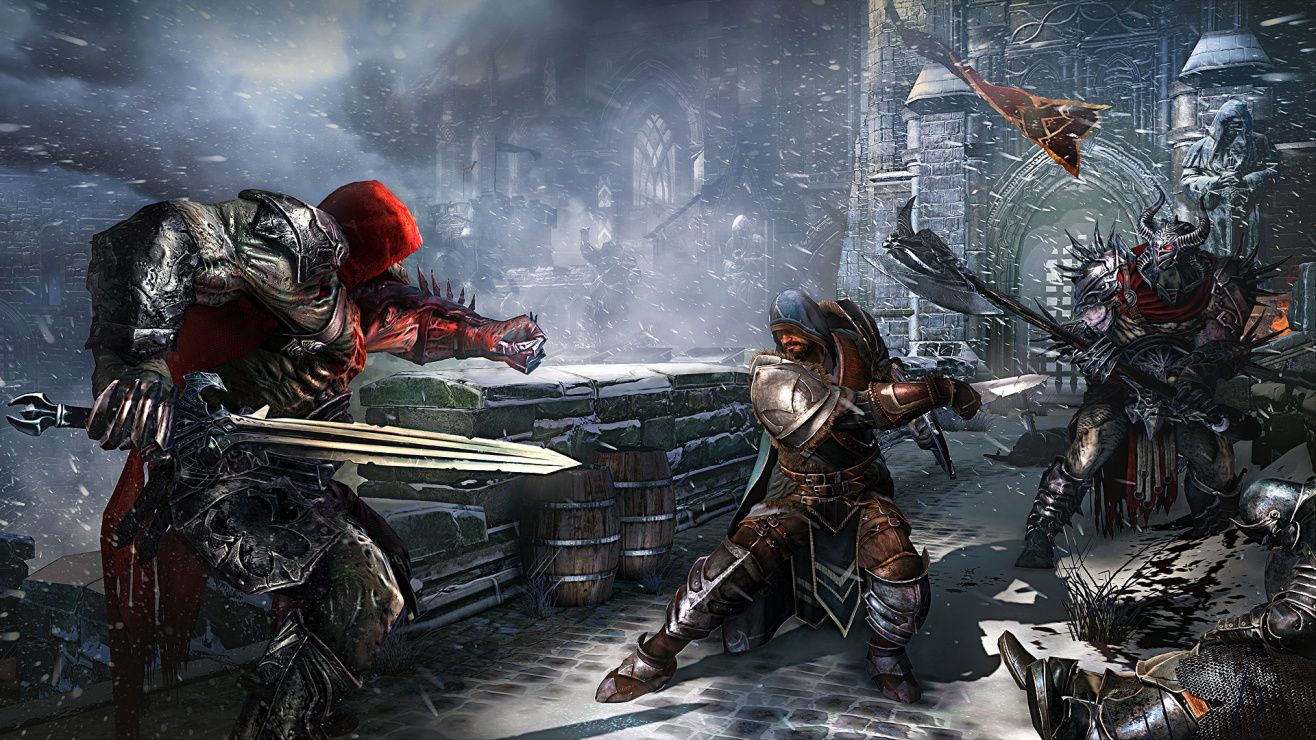 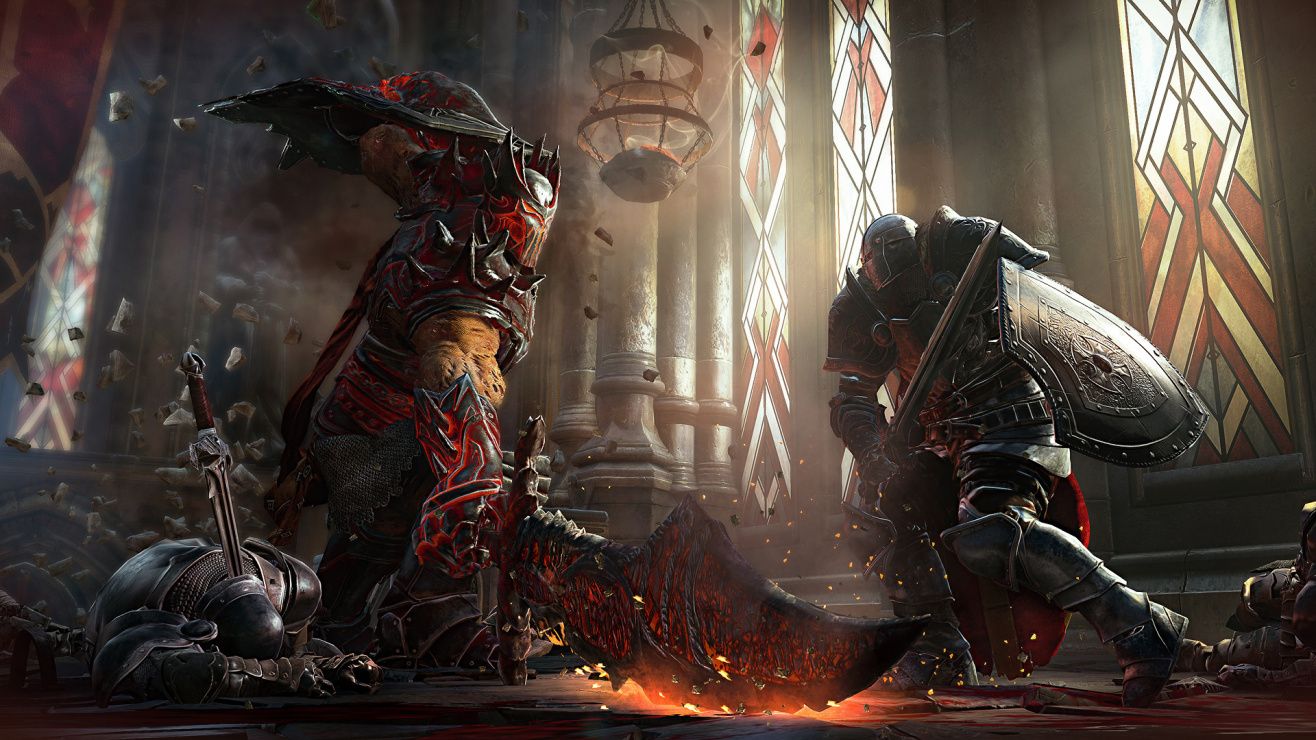 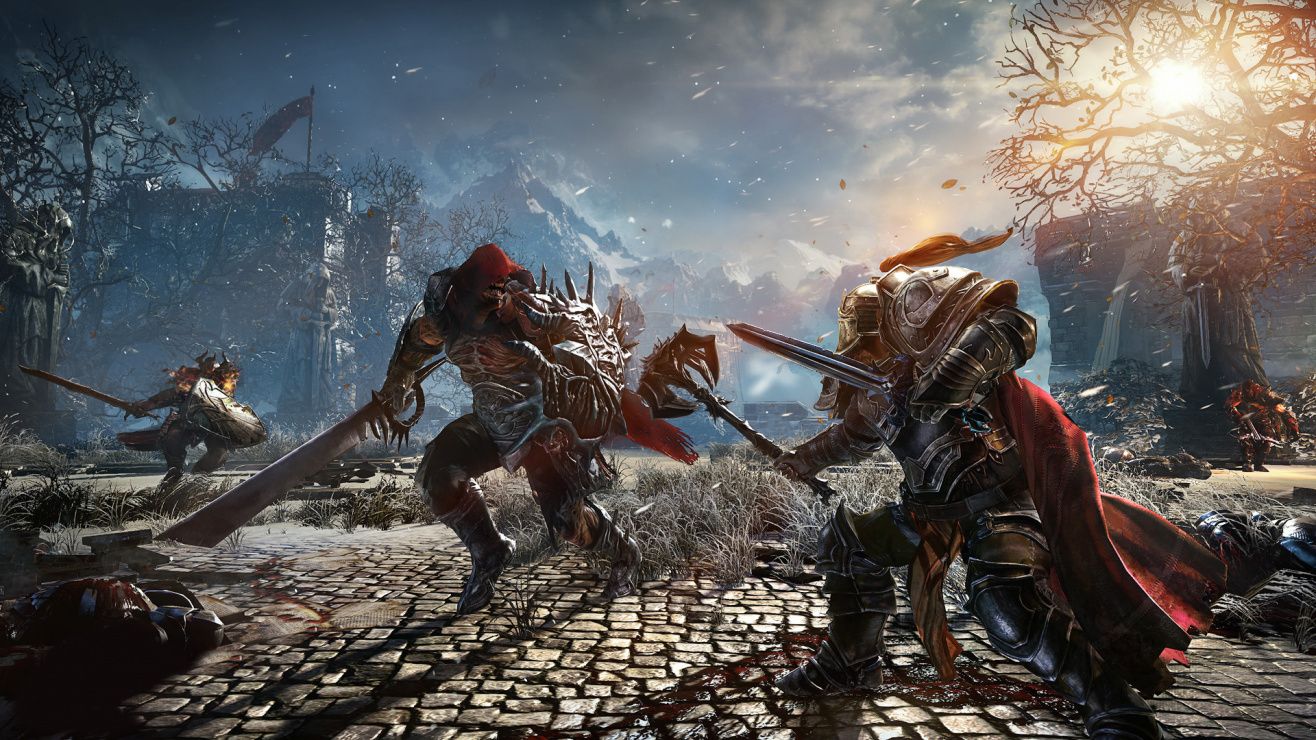 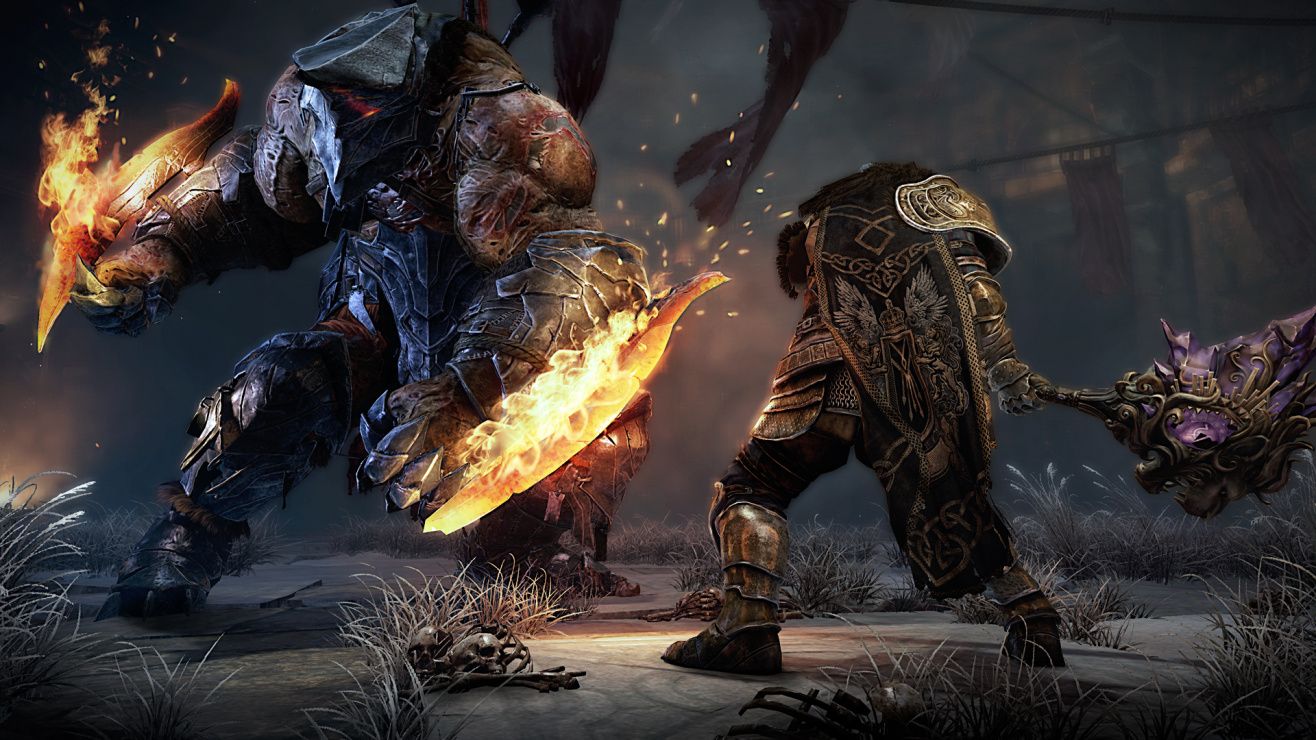 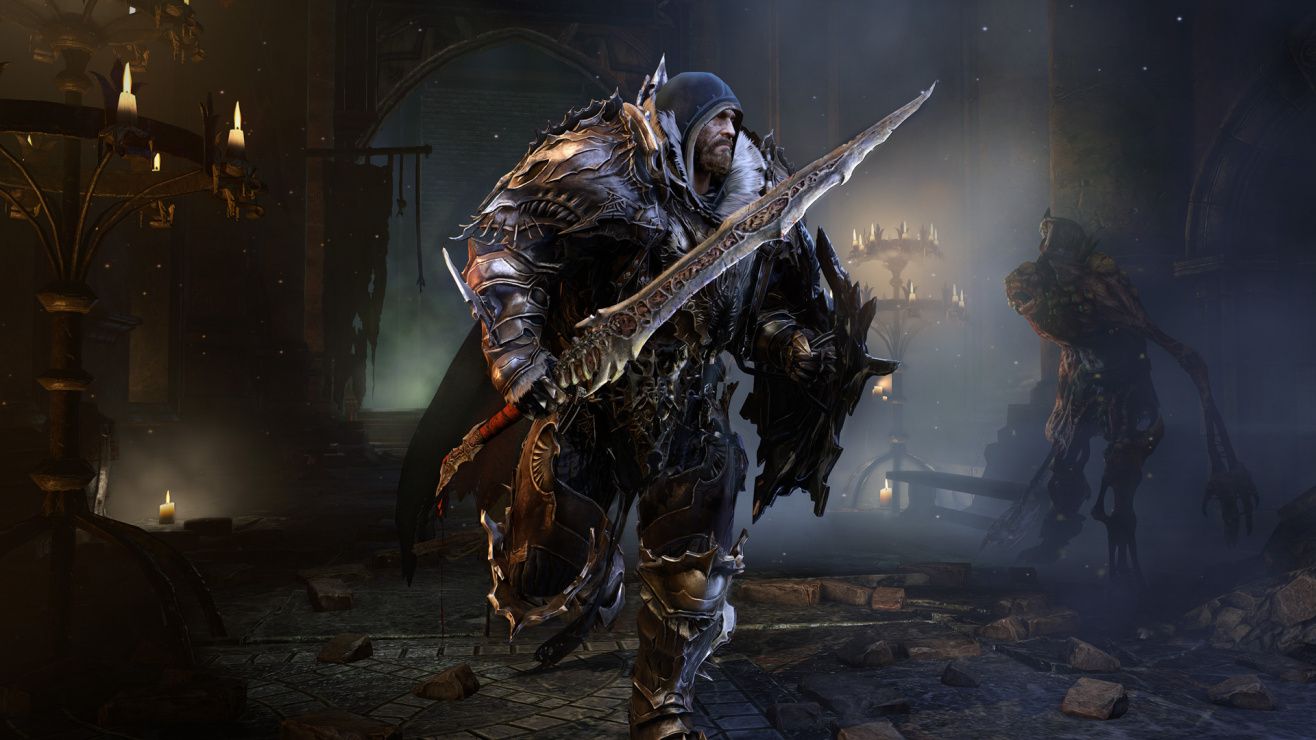 Lords of the Fallen

PC Steam Console Playstation action Xbox adventure rpg fantasy atmospheric iOS Android Google Play open world magic combat sword medieval
In the Time of the Ancients, the Worldly Realm was ruled by a God of pure evil, who enslaved all humankind under his Dominion. But fear turned to anger as rebellion grew in the hearts of men - until the dawn of the Great Rising, when the fight for freedom began. After a glorious victory that cast aside the Fallen God, humans dictated a new order... a world where no sin can ever be forgiven and redemption was not an option. Now, millennia later, the world trembles in fear as the Demonic Rhogar Legion returns from their dark realm, driven by a foul hunger for innocent spirits. Humanity, in a desperate last act, calls upon an unlikely defender - a convicted sinner, rejected by society and cast out of the light... a man known as Harkyn. Now, alongside his mentor, Kaslo, they must travel to the source of the Darkness... to face the Lords of the Fallen.
Share Share Share
Promote for 50G

This game i have had for a while and although not completed in the time i have had it is a really enjoyable game. i have recently came back to it in 2019 and got slightly further than i did so im progressing slowly. this game is a learning curve and a challanging game from being a souls fan and other soul game a likes this is one of them from challanging combat to the awesome soundtrack. lords of the fallen is a lot slower however and bosses moves sets are very few and repetitive their are sometimes ganks in the boss fights which can also be annoying but if you can master parrying/backstabs then you can easily kill the small mobs. the world can also be confusing at times and may not always be clear on where you need to go.

First and foremost do not expect a finely polished gem akin to the pioneers of the genre. Set the game's shortcomings aside and it will reward you with a captivating atmosphere and in overall an enjoyable experience.
You will meet a lot of broad shouldered, muscular people (BRUTALITY ENSUES!) armed to the teeth and armored like a tank put in a dark toned, beautifully crafted setting with lots of options for weapons and equipment.
Since the dialogues and the story won't send shivers down your spine you have to settle down with combat, lots of it. There are some problems here and there with the animations. Plus the bosses act like trainees in a martial arts expo, meaning they perform their katas or rituals while you standing aside and thinking whether some equipment suddenly made you invisible. Meaning they are lacking intelligence sometimes. Well they might be harmless, but look nice overall. Compared to general monsters most of the bosses are like benevolent rabid dogs. So the average joes around the corner will bring you the tough moments that will spice up your life during exploration.
The story exists, but the shallow dialogues doesn't help the already bleeding plot elements, so don't expect ooh-ahh moments that will send shivers down your spine and result in irrevocable shirt tearing and blood pressure fluctuations.
Nonetheless the game's unique setting and visuals compensate for the above mentioned imperfections, so if you can stomach all the drama you will enjoy the ride.
After finishing:
if you like a good scifi setting and much better overall experience, go next for The Surge 2!

First of all this game is pretty FREAKIN GOOD For a "Less then 10$" Base game.
I got the entire collection on sale for 4.99$
Saying that the i will go into the pros and cons of the game.
Pros
1. The game has an amazing art style (if you like 15th century Gothic style fantasy)
2. The character development is quite interesting. With your classic three class system, but then they add a kind of perk system.
3. The armors in my opinion look just strait up brutal.
4. IMO the combat system seem pretty balanced if not a little unpredictable. ( which keeps it from getting boring)
5. The story seems linear yet more open then your typical hack and slash level design
6. Not to much mystery so you do not get confused, But there are some good jaw dropping moments
7. The general feel of the game is pretty smooth.
8. There is a simplistic choice system great for novice gamer's.
9. The game is not demanding at all (I've played to the end on an HP Pavilion Laptop with R5 Graphics 512 MB VRAM)
Cons
1. If you are a Veteran Souls-Like player this might bore you.
2. If you are used to Hyper fast game play this will seem sluggish
3. This can be pretty unpredictable if your not careful
4. If you prefer super challenging games DO NOT BUY
5. There is a pretty choppy tutorial stage.
6. You can feel stuck sometimes
IN CONCLUSION
The game seem like an introductory Souls-like. The game is not to hard, but might be for casual players.
If you want to transition to hard Souls-Likes this is perfect. The game its self is overall satisfying and quite fun.
I 100% recommend this game to all casual players looking to get serious.
I 0% recommend this game to players that are level 9999/NG+9999 on Dark Souls 3 ( If you catch my drift)
Lets just say i wouldn't waste 45.5 Hours of my life on something that shouldn't be played

Lords Of The Fallen is a competent Souls-like for the most part. Great world, plenty of side quests to do and things to murder, and the story is actually decent for a game like this (and you don't have to read cryptic item descriptions to figure it out).

Warhammeresque world.
Seems the main complaint is the game is clunky. Yes it is. at first. Take off that heavy armor or upgrade your strength abilities and you'll be zipping around in no time.
The atmosphere too is some of the best in gaming today.
The audio design is awesome. The haunting halls of the castle that these demons inhabit is so eerie. The sound of your sword or axe hitting the demons is so satisfying, with both a mixture of metal and flesh sound effects. And that music is phenomenal.
Give it a chance, and you just may be sucked right in.

I am fan of souls - like games. so , i tried this game.
- Worst Tutorial. In the beginning of game , you will fight a knight but the game didn't give you a hint the control button. example : R1 to light attack , R2 to heavy attack , L1 to guard.
+ Gameplay. Yes , this game have souls-like game concept such as there are sealed door that you need to open from other side or need key to open it. When you die , you will drop your souls where you died.
+ Graphic. Awesome graphic in this game. i wish there were photo mode in this game.
+ You couldn't create your own character like Dark souls or Code vein but in this game you become a Badass character named Harkyn.
- Difficulty. If souls - like game famous because the difficulty but this game is too easy even i could defeat all of bosses in this game in first attempt and need about 2 - 3 minute for one single boss.
+ Story. Plot Twist. i didn't see that coming.

Considering how cheap the game goes, It's worth playing. Lords isn't a great game. But it was one of the first in the Souls-like trend and it did a lot correctly. The game looks decent even by today's standards and has a lot of cool designs and a few interesting pieces of lore.
However, the lore is hard to want to engage with when the story and characters are all so forgettable. Very little really happens since the game is so short, and there is one cutscene that is over 5 minutes and unskippable. No one says anything interesting and other than maybe a side quest or two no one does anything interesting.
The combat fairs a little better. You get three playstyles at the start and they all have some use. The Warrior one is a tad broken since you can get free hp regen by waiting a minute after fights but the rogue one is stupid. I have literally one shot bosses with it using the stealth crit with a greatsword.
I think the best example of how poorly designed the combat of this game is how you have to fight a Rhogar, a tougher enemy, in the first room. He will attack you within a few seconds of the game starting. When I first opened this game I nearly died to a single enemy because I didn't even know which button was attack yet.
This is all a real shame since the basic fighting mechanics are all reasonable and the sounds are satisfying. Just wandering around the levels and ripping apart basic enemies is definitely the highlight of the gameplay loop.
Bosses are usually the pinnacle of the combat system, making you use all your skills to defeat seemingly unstoppable foes. But not here. Only the first boss and maybe two others were truly quality fights. The others have shitty gimmicks or are no threat at all. The DLC boss especially is horrid, with a one shot move that is poorly explained while everything else the boss does is pathetic in terms of danger.This all really sucks since each boss has a secret kill condition that rewards you with superior versions of the boss's drop item. Which I love.
The best aspect of the game other than its combat against normal enemies is the level design. It has a ton of secrets, shortcuts, and ways to get around to old and new areas. The game is short and only has 3-4 main areas but all of them are decent in size and are a joy to explore for hidden loot. It really was top-notch stuff. The loot also is, some of it is hard to find and requires very specific conditions but much of the armor, weapons, and trickets are useful at some point and finding a potion bottle never hurt either.
I wish this game was bigger and better. Some of what is here is so solid. At times this game rivals some of the best parts of dark souls, but most of the time it's frustrating and gets in it's own way.
For 3 dollars, it's worth visiting. One playthrough can be done in under 10 hours and it took me 35 to do almost everything. Give it the love it deserves, because despite many flaws this game really tried. I just wish it could have turned out better in a sequel.

This game is a lot better than I was led to believe.
Do not pay full price for this game; it regularly goes on sale for $3. At that price I highly recommend it.