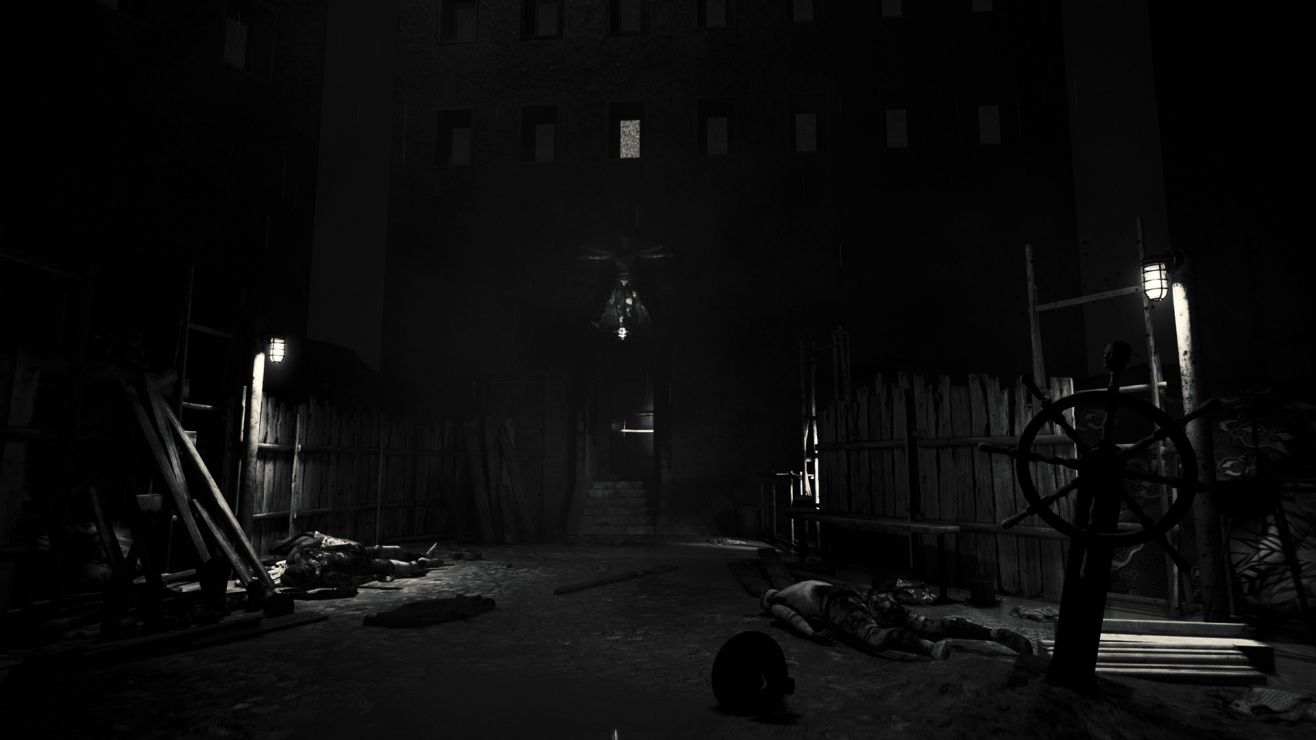 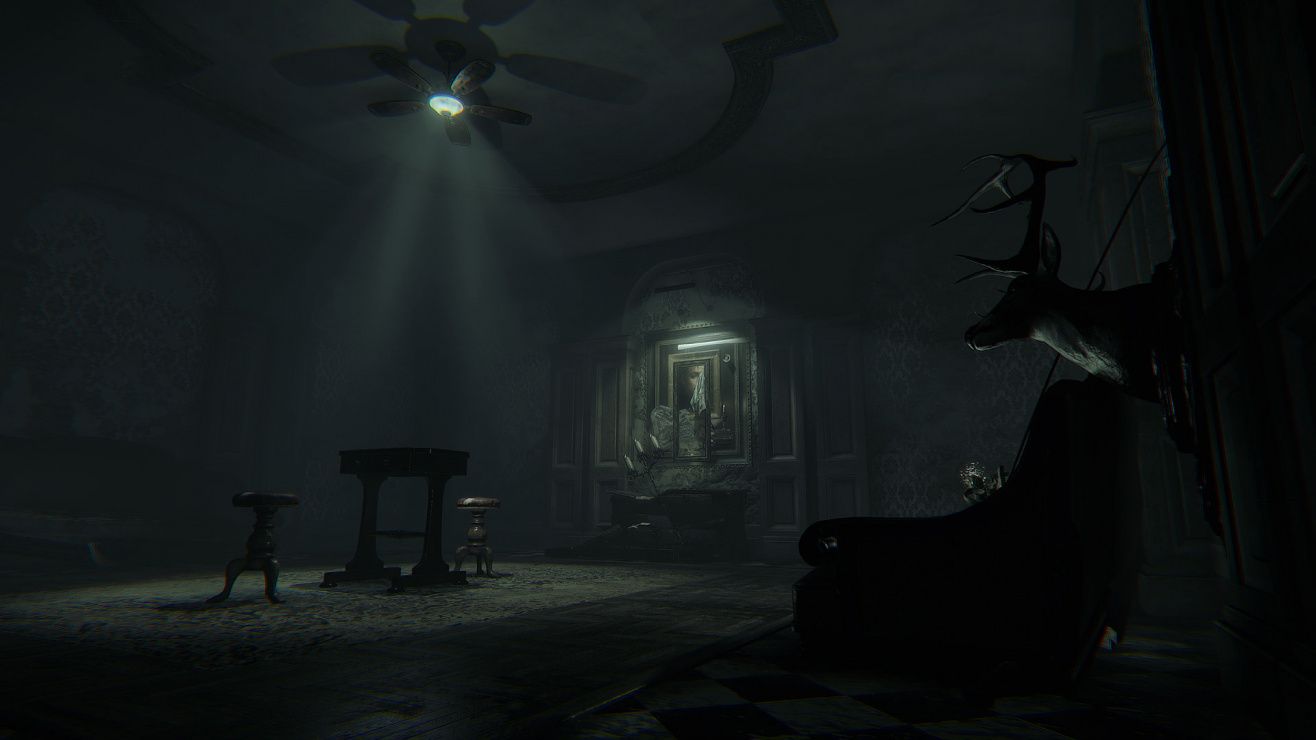 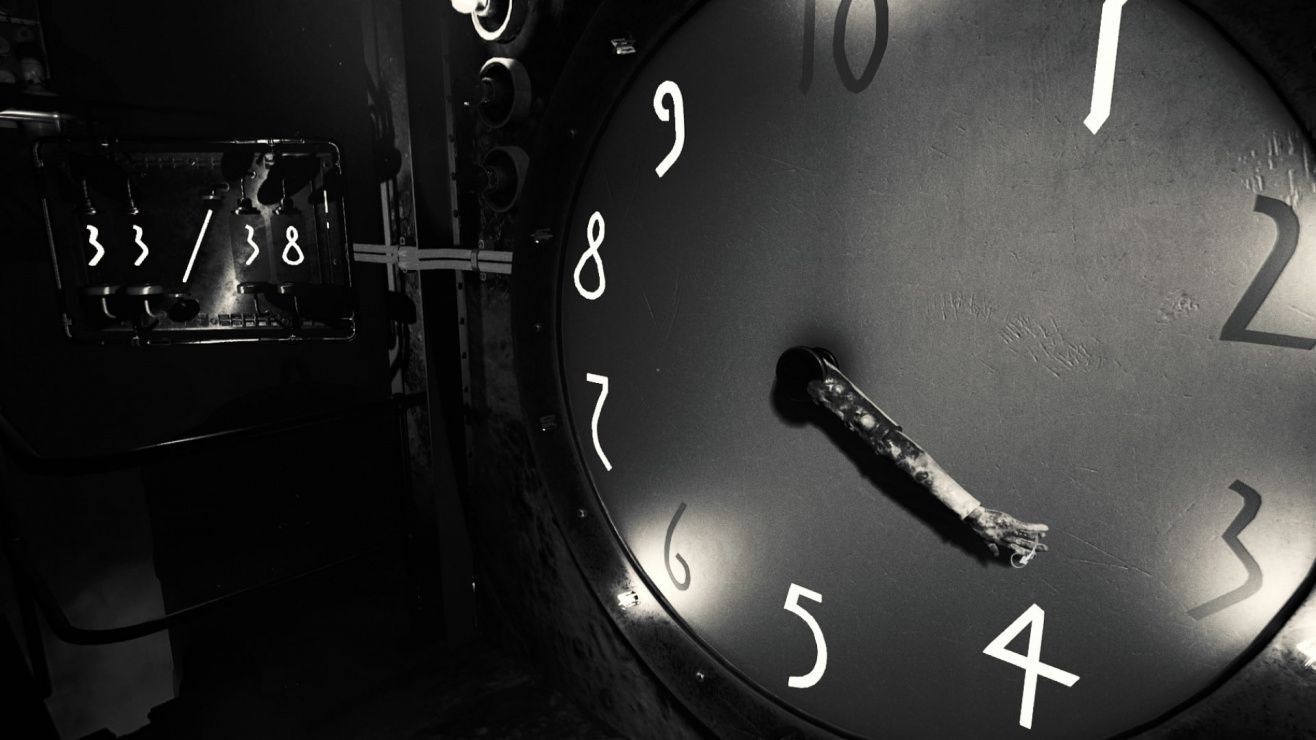 atmospheric dark horror psychological puzzle scary
The cameras are all focused on you; the center of the scene. Not just in character, you are the character. The part to play is singularly yours. Written just for you. You are met with silence. No barking orders from the director. No call to action that you need to become this version of yourself. The demand to act fills your mind, but the script pages hold no words. Your past has helped to mold you into what you are, forced upon you the skills required to hone your craft. That same past has scraped deep furrowing scars into you, not on the outside where the world can see, but in a place buried so deep within that it has become shapeless. You push those memories down but let the experiences drive you into who, or what, you must play. Darkness surrounds as you stand silently in the spotlight, the only sounds to be heard over your heartbeat are the distant breaking of waves against the hull and the sound of cameras pointed in your direction preserving this moment for eternity.
Share Share Share
Promote for 50G

A psychological return
The sequel to Layers of Fear arrives 3 years after its predecessor. Same developer team but different publisher. If you think only painters can go mad imagine how much double the fun is when the protagonist is a psychologically disturbed actor who is on board an ocean liner where his latest film is being shot. And, of course, what can be more claustrophobic than a ship with its narrow corridors and dark, lower sections?
"Such a shame. You almost had it."
Similarly to its predecessor we start out in the same hub-like area at the beginning of every chapter. Instead of a magnum opus the emphasis is not on the film itself but more on ourselves, on our personality. Still, in order to begin our rollercoaster full of crazy mannequins (that twist swiftly and suddenly in a very Silent Hill-like fashion) and shapeless, muscular monsters (that utter a cry scarier than the way they look) we have to play a reel and leave.
Troubled past (and present?)
This is still a walking sim with heavy emphasis on exploration. Notes and objects we pick up shed some light on the actor's past (childhood) - here it should be noted that the chapters have greater diversity now. For instance, act 2 takes places primarily in the lower sections of the ship. Lots of machinery, coal and several references to Fritz Lang's expressionist sci-fi drama titled Metropolis (which will reach centennial status 7 years from now!) while the majority of the chapter basks in black and white. Episode 3 I consider the odd one with its 2-storey house setting. Only 5 chapters this time but they take slightly longer to complete.
Putting together the story... and the film
Beside hearing voices from our past we should not forget the ever present director himself. Depending on how we react to his biddings (following or disobeying them at important areas throughout 4 chapters) we get to see 3 different endings. I would describe them as "one is crazier than the other". Although some things are clarified by the end the game still leaves some room for interpretation.
NewFear+
Including a new game+ mode was a good idea as the game has several collectibles. If we forgot to pick up some movie posters, mysterious objects or photos we do not have to replay the entire game just those chapters affected. Also, replaying 2 acts and picking the opposite choice when commanded by the director we can already have a new ending. For this, though, we have to complete the 5th chapter one more time.
Timor timorum
This is a great sequel! One can only appreciate the missing DLC here. You'll also appreciate the subtle horror movies references and while it is easy to spot that of The Shining hats off if you immediately recognise the homage to A Trip to the Moon.

Due to all the negative reviews I feel like I have to share a positive experience.
The game indeed has this annoying insta-fail chase sequences... except they're not that bad. If anything, I feel like Bloober's Observer was far worse.
The chase sequences in Layers of Fear 2 are brief and not that hard to solve.
So what are the pros of the game?
1. Stunning atmosphere and set pieces
2. Terrific binaural sound design
3. Great animations
4. Interesting story
5. Tons of cinema references
6. I can't stretch this enough - the set pieces and visual design here are some of the best I ever encountered in any video game.
7. A new game + mode with multiple endings and a lot of collectibles.
Don't be afraid of the chase sequences - i'ts really not worth skipping the game because of them.

I was a MASSIVE fan of the first Layers of Fear. This one was unfortunately a bit disappointing. Its bogged down by some needless monster mechanics, loading screens, relatively boring storytelling and death. In the original game, "death" simply meant further descending into madness. There was little to no interruption throughout the game. It had very few jumpscares and used the fact that it is in fact a game to its advantage, with mechanics based on the exact object you looked at. It is still a fairly decent game, and I did enjoy my time with it, but it pales in comparison to the (in my opinion) masterpiece in atmospheric and psychological horror that the first game was. It is however, still a fairly decent horror game, with a few moments that really shine and do a damn good job. It is however difficult for those moments to really shine when the rest detracts from the game as much as it does.
Is it a decent, or maybe even good game? Yes.
Is it as good as the first game? Probably not.
Would I recommend it? Yeah its aight. Pick it up if its on sale. Its relatively short.

Layers of Fear 2 is a surreal psychological horror adventure in the typical "Bloober Team" style. You follow a meandering, but ultimately linear path through surreal and disorienting environments that change unpredictably, you solve occasional puzzles, and you collect items and notes that tell a fascinating, dark story.
This story is, in my opinion, the strongest point of the game. You start playing as an actor, hired by a mysterious director to star in a movie that is getting shot on a cruise liner in the early 20th century. The director is known for unusual methods of building his characters, and he believes that only you are "broken enough" to really "become" the character he envisions. There is also a subplot of what appears to be two children roleplaying a pirate adventure. However, both plots turn much darker while at the same time the environment unravels around you, and not everything is as it seems. I found the story captivating and well-written, and the voice-acting excellent. While I found some gameplay elements rather annoying (see below), it was the story that made me continue and enjoy the game.
Puzzles are well-designed and mostly not very difficult. Often they aren't particularly logical, but in a surreal game like this, that actually contributes to the atmosphere. You still get enough cues to solve them, and since you have only ever access to a handful of interactable props, you can easily stumble across a solution just by experimenting. The game also features several groups of collectibles - which are all missable because doors often close permanently right behind you, locking you out of the previous area without any warning. However, after your first playthrough you'll unlock a "New Game+" mode, which keeps all collectibles that you already found, and allows you to replay chapters selectively in order to find missed items, or change crucial decisions to get to a different ending.
Apart from puzzles, the game also features trap gauntlets and chase scenes. Neither of those are well implemented, and they annoyed me to the point where I considered abandoning the game. They are mildly scary for the first two times, but then just become repetitive exercises that detract from the excellent story and atmosphere. They lose their suspense factor because you always know that you will get through eventually, but you usually need to learn the level layout and/or movement patterns to do so, and so you often have to replay the same scene several times until you get through. Thankfully you can play the game in "safe mode", where monsters and traps won't hurt you - this makes the respective sequences rather boring, but in this case I prefer "boring" over "annoying". It's worth noting that "safe mode" will not lock you out of any achievements, and you can change this setting every time you start a new playthrough or a "New Game+" (but not in between).
Graphically the game is a mixed bag. Half of the time it presents its imaginative surreal imagery in deliciously high detail, but the other half consists of washed-out grey-in-grey enviroments that look absolutely terrible. With a sympathetic approach, one could argue that these parts use a grainy black-and-white aesthetic reminiscent of the early movies that it also references by other means. And that's a valid perspective. But equally valid is the more cynical view, i.e. that lazy devs snuck a lot of low-quality imagery into this game, which looks just awful regardless of any artistic intention behind it. The sound effects and music are very well done throughout, though.
I recommend this game to fans of story-driven psychological horror adventures, who don't mind that the experience is mostly linear and passive. If you get immersed in the story and seek out the notes and items that transport it, this game can provide an amazing experience. To everyone else though, I'd suggest to play the first Layers of Fear game before considering this one. While the stories of the two games are not related, they play and feel very similar, and the first game is available at a much cheaper price. And after playing that one, you'll have a good idea of what to expect from Layers of Fear 2, and whether it will be worth the money for you.

You are the captain of your own destiny when playing this game. Layers of Fear 2 is a good game, I also love the setting it's like we are inside The Titanic and the shape-shifting environments are sure to keep you up at night.

Strange, but interesting. However, it's not as strong as it's predecessor. Though, it's still worth playing. Visuals are great and the lighting effects are used to enhance the experience. Story will not make sense until you finish the game, so do not let that sway your opinion.