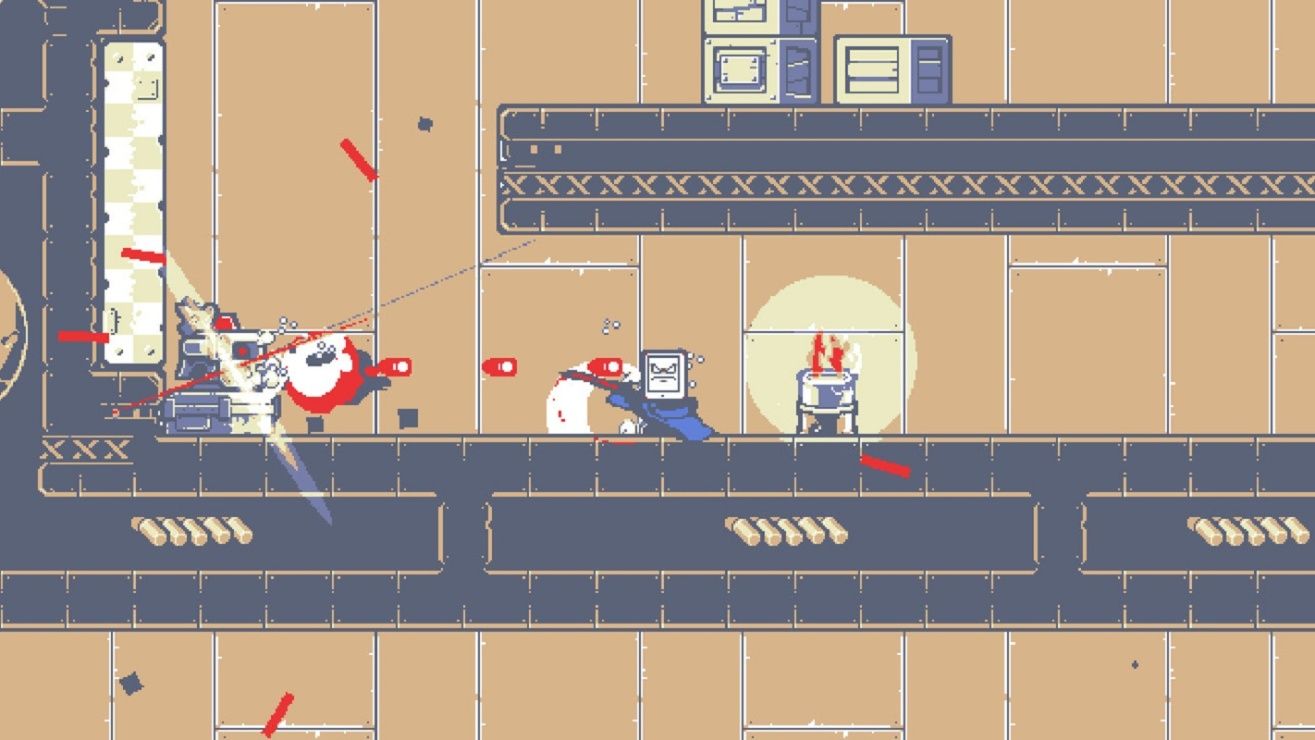 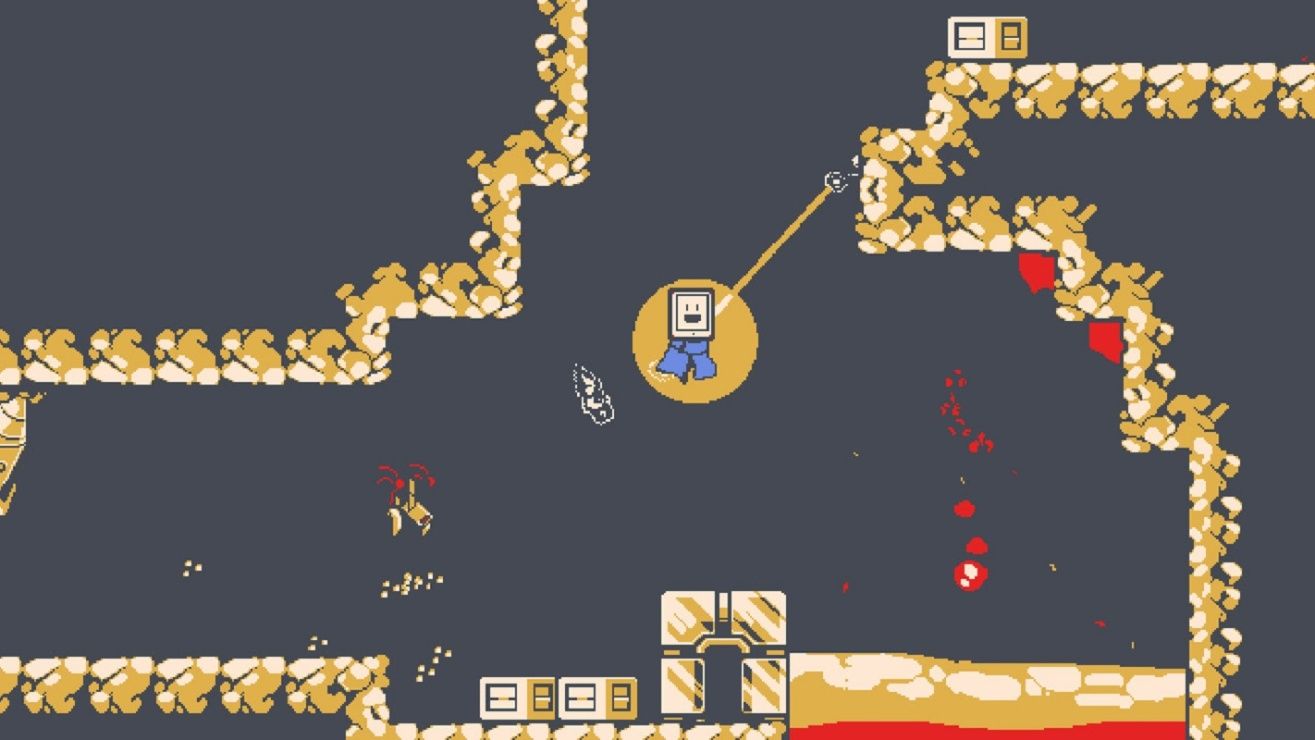 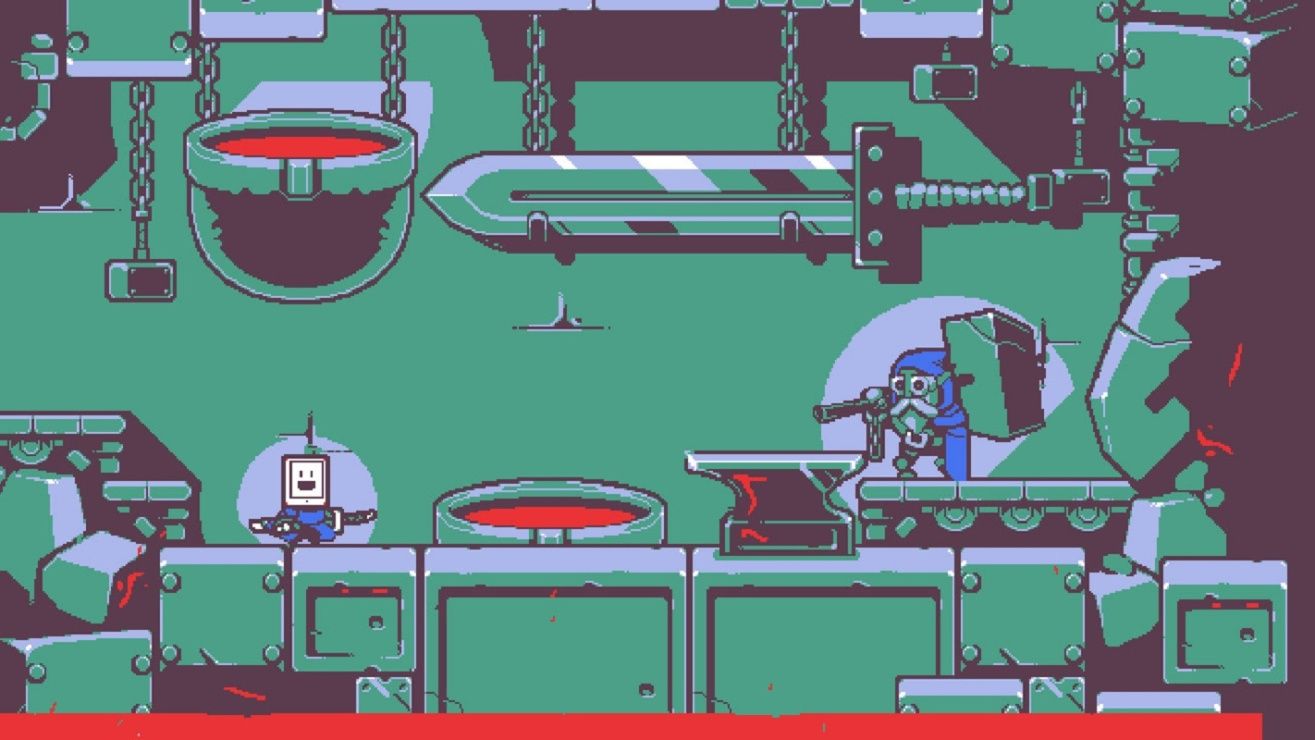 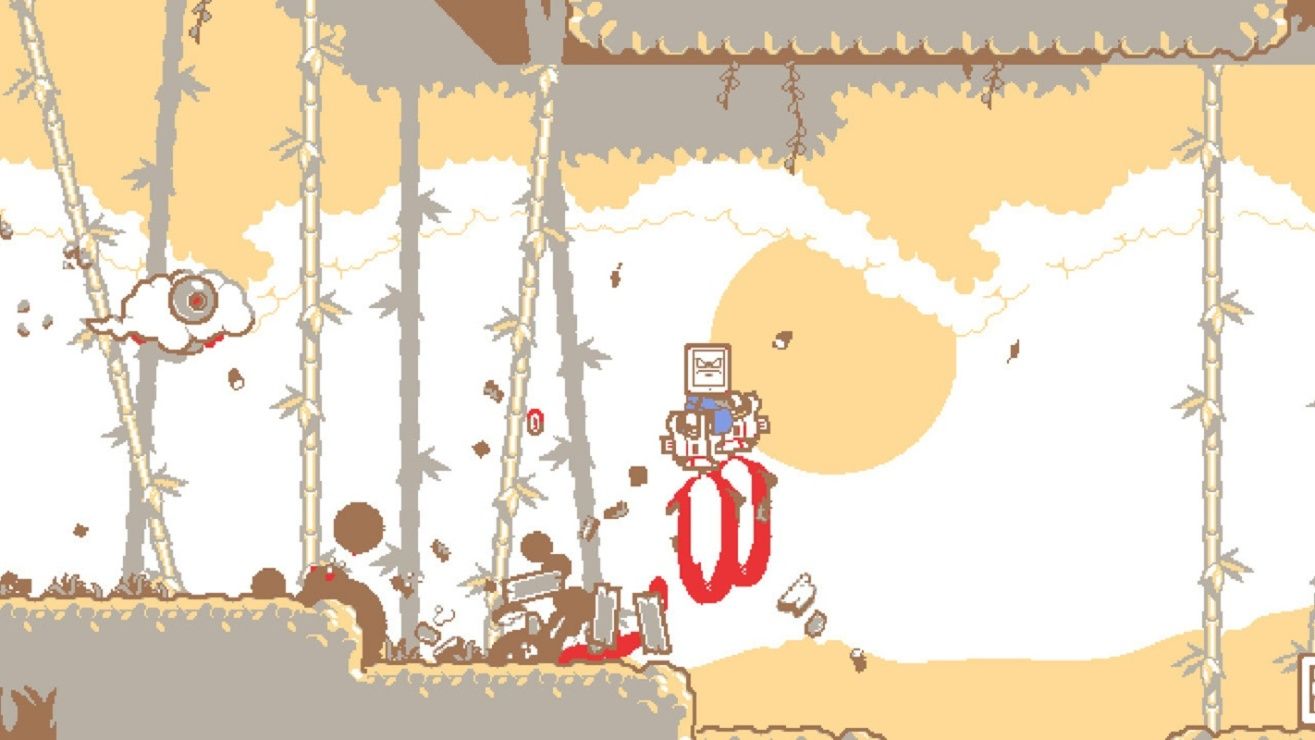 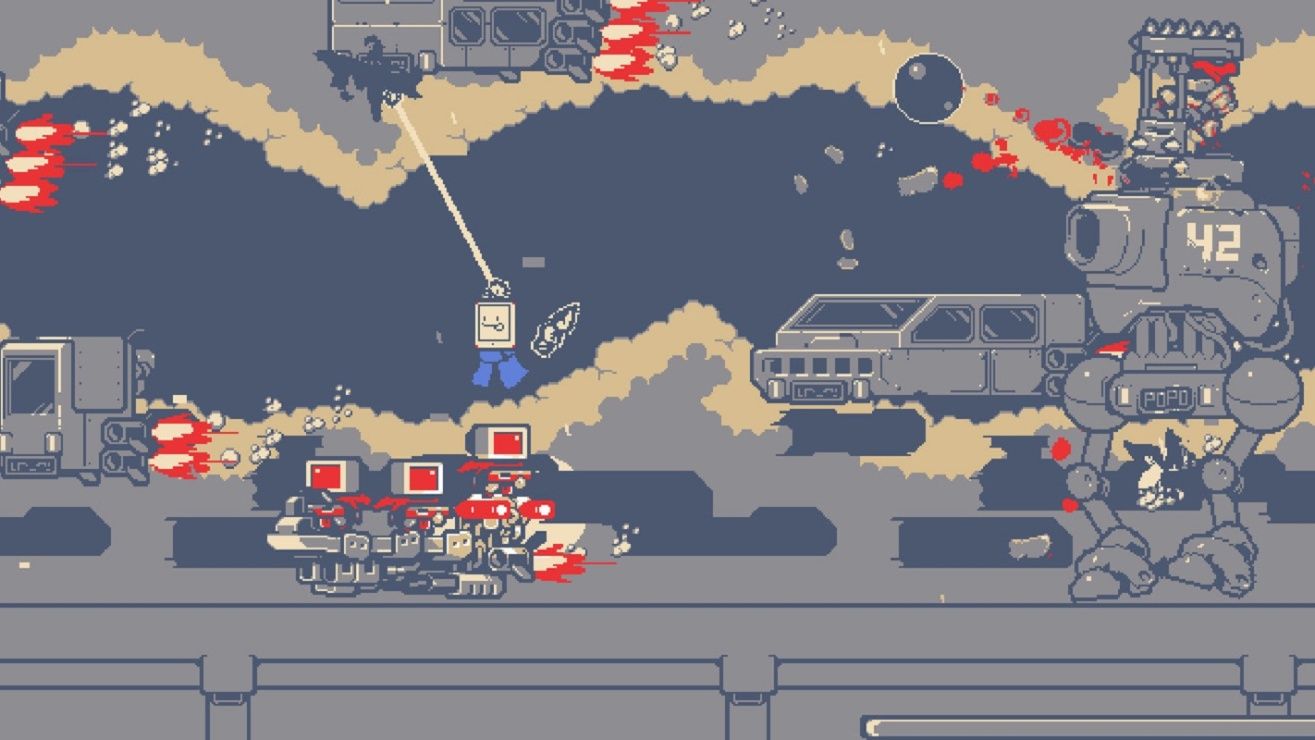 2d action adventure casual fantasy indie metroidvania ninja platformer
A traumatic event has shaken the balance of the world. Human life has been almost wiped out by the evil A.I. Lemonkus. Robots roam free across the earth. You take control of Tabby, a killer robot infused with the soul of an ancient warrior. Start out with nothing, progress and increase in strength by killing enemy robots to unlock abilities, weapons and kick-ass ninja tricks. Explore a world filled with secrets, hidden passages and mysterious characters. KUNAI is all about movement and agility. Use your ninja mobility to reach places where no normal robot could ever go. Explore the different pixel-art environments of KUNAI, each with a minimalistic palette, while Tabby makes cute faces. Use a variety of ninja tricks to move around the world and unleash your deadly arsenal of weapons to fight your way through armies of evil machines, rogue androids, and mindless mechs to maximize your badassness.
Share Share Share
Promote for 50G

If you like the trailer you're going to love the game, period. I've been looking forward to Kunai for awhile but all my expectations were smashed by the outstanding reality on display. The most important thing to me in a game like this is always "feel", and my god does Kunai deliver. The controls are CRISPY. You get some very early movement upgrades (via the games namesake) and it's just super satisfying zipping around as Tabby. You actually feel like a ninja. I would say the movement feels even better than something like The Messenger. This has more modern controls with jump sensitivity and the ability to attack in all four cardinal directions.
Kunai has quite a bit of Hollow Knight influence in the gameplay, but the tone is much less somber and the action is fast-paced. Highly recommended. I've only got 3 hours in but I'm so smitten with this game. Can't wait to sink more time into it. I DEFINITELY didn't take a day off work to play this on release....

Review by Gaming Masterpieces - The greatest games of all time on Steam.
Is this game a masterpiece? Yes, as long as you don't mind running around as a tablet with a sword and slashing evil computers.
It's a platformer, Metroidvania style, with fluid and dynamic movement, medium sized levels, and with save points that bring you back to life when you have died. Your special equipment are two kunais to climb up walls, or you can simply swing on them like Tarzan. Although the levels are not that big, it is sometimes a bit unclear what to do next and you have to backtrack and explore. There are hidden areas with treasure (or new items), your tablet can get new abilities & upgrades. The difficulty is average, even I could kill the first boss in the first try. It does get harder later, of course.
Join the revolution of the blue computers fighting the red computers, controlled by an evil AI.
The graphic is in pixel art, using only a few colors. Looks good. Gamepad works fine.
Conclusion:
Retro art platformer with tight controls.

An incredibly well designed and unique metroidvania experience, KUNAI offers fantastic movement, brilliant art and great sounds to enjoy through a ~10 hour playthrough, not including hunting for collectibles. Highly recommended.

"Fast-Paced Action Metroidvania! ヽ(=´▽`=)ﾉ"
Intro
KUNAI. It is a metrobenia action game produced by TurtleBlaze and published by The Arcade Crew. As you may know, The Arcade Crew is a relatively new publisher, but some of their staff are from Dotemu, mainly veterans for the arcade videogame industry. The kunai is commonly associated with the ninja, and it could be used as a multi-functional weapon. We can infer that this game is related to such a theme.
Game Experience
Gamers have always been looking for a good metroidvania. This game may satisfy your thirst. There are clever movement tricks, interesting battles, and brilliant movements through using KUNAI. With this weird robot made of recycled trash, you will explore the post-apocalyptic world. Maybe this is somewhat similar to a game called Messenger. Nevertheless, there are at least some interesting additions to this game. Slow motion and chain attacks in the air are unique fun to this game. The game experience is great overall, and this is a neat ninja action game.
Pros (+) & Cons (-)
Neat Gameplay
Fast-Paced Action
Exciting Boss Battle
Good Chiptune BGM
Tricky Controls
Somewhat Short
Somewhat Confusing
Uneven Level Balance
Verdict: Game 8/10
KUNAI. This is a fast paced action game themed on the ninja. Especially if you liked the game of metroidvania, this game can be a good choice. Despite some glitches, the game offers quite neat gameplay. As you begin to adapt to the hardcore ninja tricks, a unique feature of the game, it will ensure consistent fun until the end. If you can afford it, try this game. Recommended!
Side Note
Follow Nyanco Channel ヽ(=^･ω･^=)丿 :

Fluid and dynamic with a great aesthetic.
Tabby controls like a charm, the kunais are fun to use. It's too short, and that's a shame, but what's there is a polished metroidvania with great moment to moment gameplay.
I'm almost done, I just need a couple of hats and some heart pieces, and after that I will probably start speedrunning it.

Kunai from the TurtleBlaze studios, presents himself as a metroidvania full of action, movements and samurai weapons that make the player quickly feel like a real badass.
The plot is set in a post-apocalyptic and post-human world, full of robots made of garbage.
A group of robots that resists the regime, dominated by malicious robots that have been infected with viruses, wakes up the protagonist, Tabby, the only hope of overcoming the affront to the well-being of the population. The character played by the player has the soul of a warrior within him, but the face of an iPad.
Although the protagonist is always silent, he is far from being expressionless. As he jumps, runs and uses one of his weapons, Tabby presents a variety of different facial expressions. The lack of a life bar is represented with the symbol of lack of energy that gives it a somewhat comic touch.
The humorous moments also present in the writing of this title offer an additional charm to all the present history and that give some laughs, here and there.
Regarding gameplay, it features a shorter variety of weapons.
Initially the player sees himself only with a katana as the main weapon in his quest to overthrow the regime and help the resistant group to survive the adversities of this confrontation. This weapon provides the ability to take down enemies as well as a defensive strand, as it allows you to deflect the shots fired by the bad guys.
It is clear that throughout the game new weapons and game mechanics will be presented, however, the main one all of them is the use of "katana" and "kunai". A ninja weapon consisting of an iron blade with a large hole in its base.
Once this ability is unlocked, the game mechanics become very clear. The player will have at his disposal two "kunai", each referring to one of the triggers, left and right. So, it is possible to launch this weapon to help with faster locomotion or to reach higher points, a little bit like the spiderman webs work. A mechanics well implemented, intuitive and quite fun.
The remaining weapons allow the player to inflict damage, but mostly serve to make way for places that were previously inaccessible.
The "shuriken" can be used to power certain switches and allows you to stun enemies. The sub machine guns, which are two machine guns that do little damage but fire a large number of bullets that allow the player, with the help of the jump, to reach more distant places. Finally, the “rocket launcher” that will be used to destroy rocks. It also allows the player to jump higher and knock down enemies faster, as it inflicts a lot of damage.
Kunai is a very expressive metroidvania, with a touch of retro, either in its type of mechanics, or for its graphic style that resembles the color palette of a Game Boy Color. The feeling of mastering the main mechanics of the use of “kunai” is quite satisfactory and a very fluid control of everything that happens on the screen give this title a good hours of fun, however, the variety of weapons leaves a little to Wish. For those who like to complete the games 100%, there are plenty of “secret” boxes with accessories that allow you to change Tabby's appearance.
Check more recommendations from Exile here!