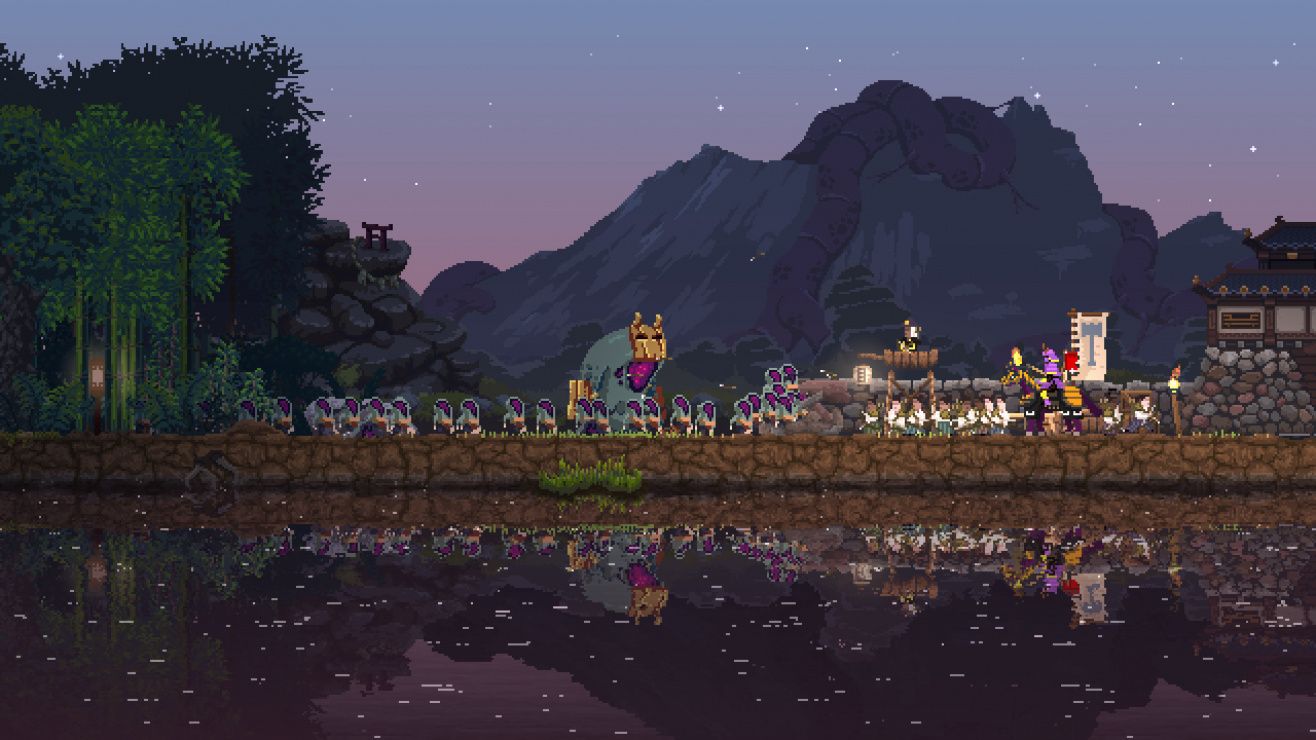 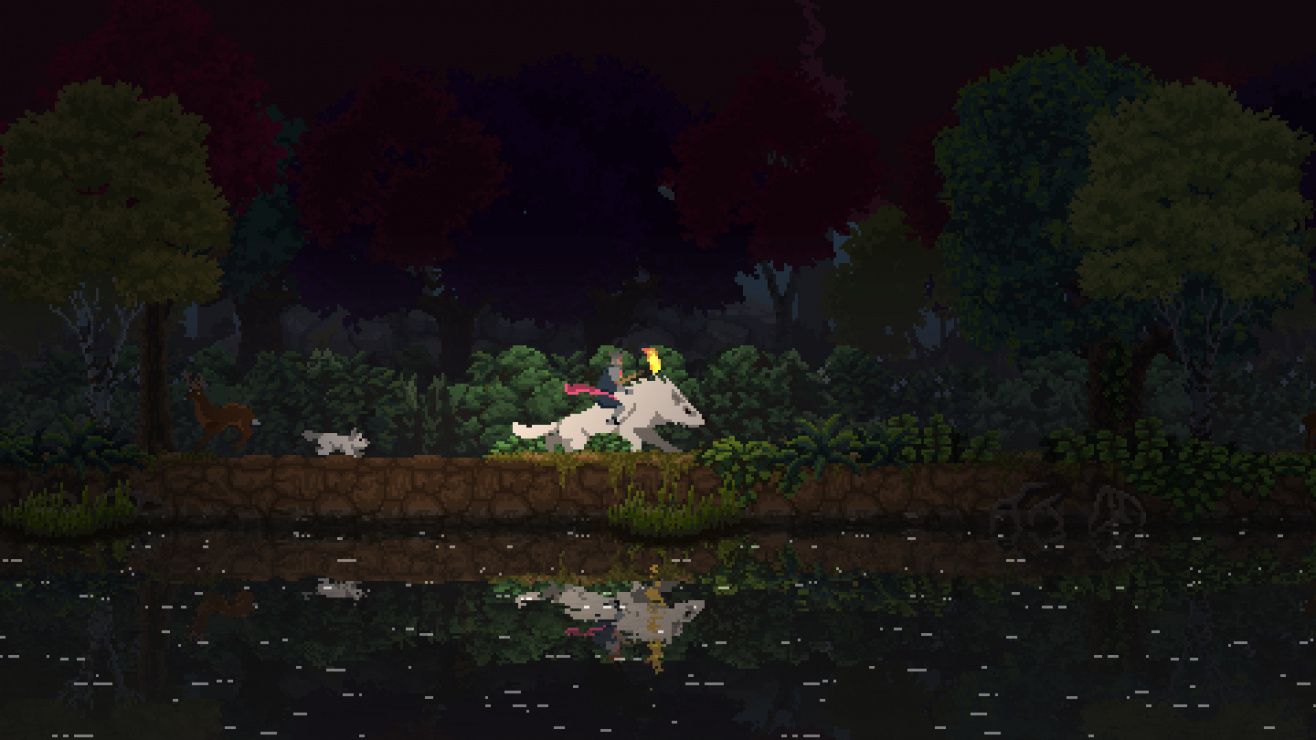 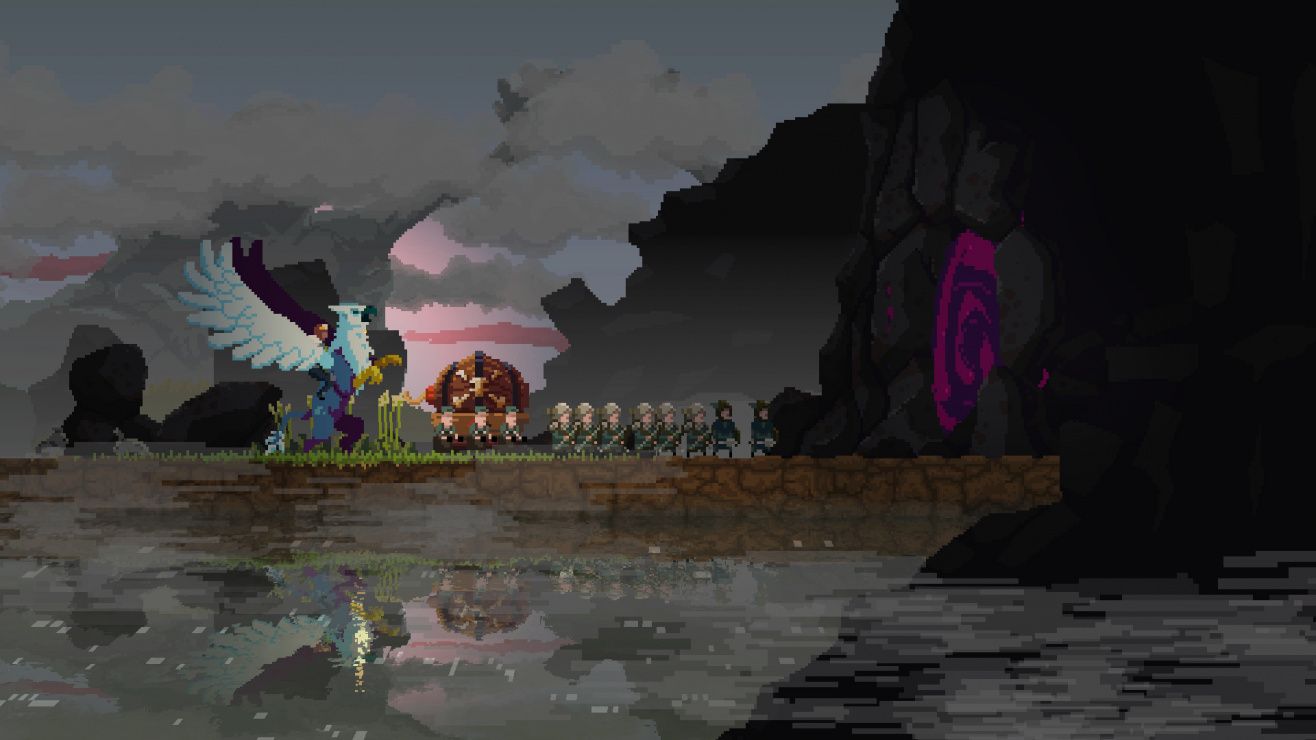 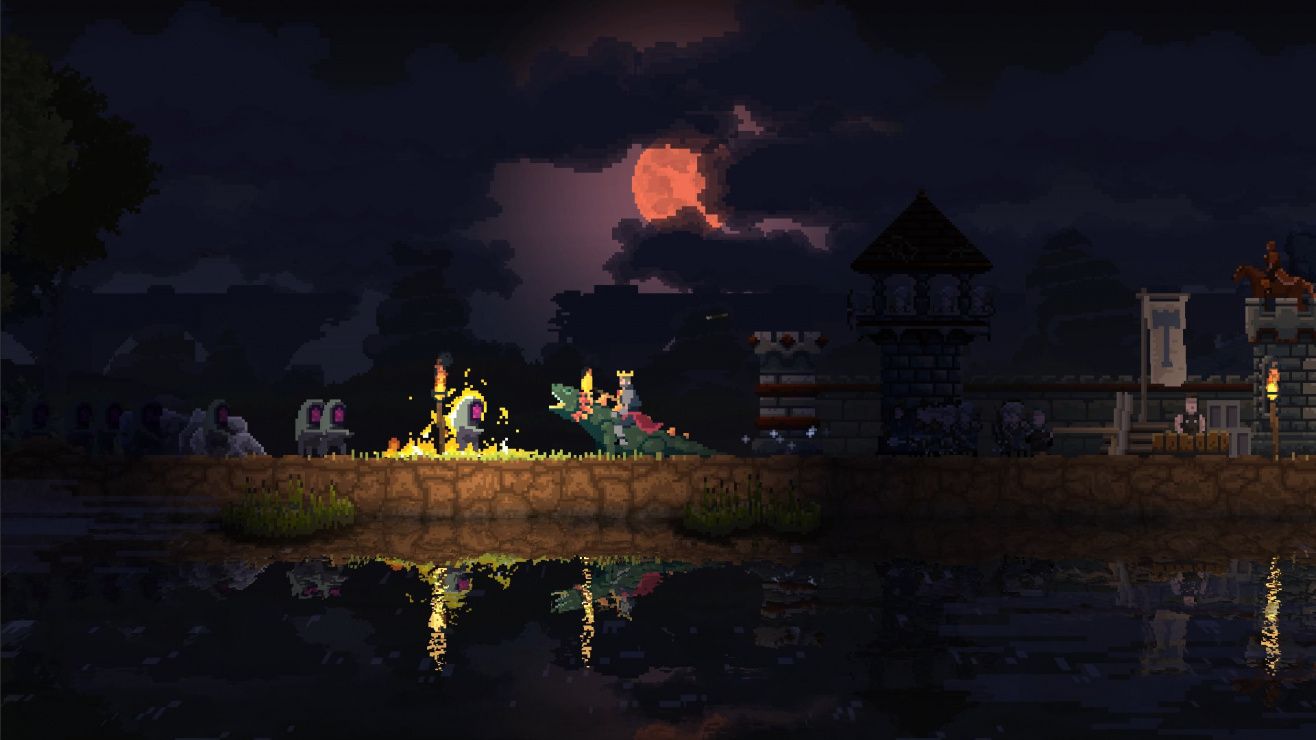 PC Steam Console Playstation Xbox indie adventure Nintendo strategy fantasy co-op survival 2d pixel graphics
In the award-winning Kingdom series, players took on the role of a monarch struggling to build their kingdom up from nothing. Hundreds of thousands of players across the world explored, recruited loyal subjects, and defended nightly against the persistent threat of the Greed – but they did so in isolation, and as with all things in Kingdom, nothing lasts… until now. Kingdom Two Crowns builds upon the challenging micro strategy experience with an evolution of the celebrated franchise. Introducing the brand-new campaign mode, monarchs must now work to build a kingdom that stands over time until finding a way to defeat the Greed for good. Recruit new unit types and develop advanced technologies to bolster your defenses. Explore fresh environments to discover new mounts and secrets hidden in the deep. Revisit and revitalize your kingdom in its entirety as you move onward through the campaign.
Share Share Share
Promote for 50G

One of the cosiest games out there! You can spend hours just upgrading your town, riding left to right enjoying the change of seasons. Even though it's a cute looking game, it has a bit of punch too. The challenge is always there, regardless of how well your town is doing you should never underestimate your enemy or winter.
A perfect game for the cold season - get your blanket and hot chocolate ready then put this on. Won't regret it, I promise.

I'm writing this as someone that jumped straight into Kingdom Two Crowns without playing the previous title(s)
After playing 5 hours my first day, I uninstalled the game and wrote a scathing review. But it stuck with me in the back of my mind, and my second day owning this game, I reinstalled, restarted a fresh campaign, and tried out a few things new things and I really enjoyed myself. So here I am, recanting my last review and hoping that this will save someone else from running into the same severe disappointment I had my first day playing.
So, first things first, this game tells you nothing, absolutely nothing. The tutorial tells you the very very basics and that's it. The rest of the information out there is because people learned through an insane amount of trial and error and plugged it into the wiki. The game shows no information on any of the buildings or how to use any new lemmings you manage to unlock, and yes, I said lemmings, these "villagers" make lemmings seem like geniuses, the faster you realize that the sooner you will enjoy this game. You are going to have so many unanswered questions when you start that your head is going to be swimming for a bit, but if you stick to it, you will begin to realize how things work and you will find yourself enjoying this very relaxing game. I'm on day two of owning this game, and I've definitely gotten $14 enjoyment out of it already. Looking forward to the Iron Age.
A few tips for beginners (some minor spoilers ahead if you want to discover everything fresh yourself):
- The most important thing is to be careful of camps, do not cut down the last tree leading up to a lemming camp unless you are absolutely sure you no longer need it, the camps disappear once they are no longer in the forest and you will find yourself in a serious shortage of lemmings. Leaving one tree on either side of the camp will still be considered in the forest.
- You can't unbuild anything in this game. So if you build every tower you come across, your archer lemmings are going to man those towers till forever, even if they are nowhere near the outside walls. This will slow your outward progression because you will have nobody to guard the wall. Again, as long as you have camps, building towers will just slow down your progression, you will still progress.
- When you unlock your banker (the little lemming sitting in front of your castle) give him your overflow cash every chance you get, once winter hits, your money production tanks and you will be happy you squirreled away those extra nuts.

I love this game.
Honestly, I've played an unhealthy amount of hours and finished all the challenge island but still find myself gravitating back towards again and again. It's so much fun to play, and it's addictive. Believe me, if you were paying attention you'd probably see day change to night change to day outside your own window just like in the game.

Game is so relaxing and fun. 10/10 builders sent to untimely death again.

Solid game, if you think this game looks shit because it's 2D and pixelated you're an uncultured swine

I don't understand what people are nitpicking about the bugs and whatnot so I won't address anything like that because personally, I never experienced any.
I will say that I never intended to play on co-op either so if there are problems with that I wouldn't know either.
However, I will say if your whole marketing of the game is based on playing as co-op, maybe you should have fixed those bugs before releasing as it was the downfall of the game in the beginning.
I mean fix everything before releasing in general but you should have done more because now everyone is left with "It's been 2 years and things still are not getting fixed."
If you guys are beginning to work on another edition of the game, maybe hold out on that and just add dlc because I truly do love the game. And even if I got bugs and probably maybe didn't notice; I still love it.
I really hope you can connect more with the people who give the game negatives reviews because I didn't buy the game in the beginning because of all the negative buggy reviews and once again I LOVE THIS GAME. So if anything, I hope you guys can learn from my review that probably won't even be read.
Maybe corona chan is getting to me but then again I just want my voice to be heard sometimes; even though I know that no one cares and that no one will listen/read.
Take care everyone.
Be careful and be safe.
<3.

I recommend this game to anyone that likes tower defense games. It's a satisfying and creative approach to tower defense. You will definitely experience a range of emotions while playing this game.
I Liked:
- Throughtfully designed and memorable characters
- Well executed pixel-art style graphics and animations
- Multiple "biomes" (default game, dead lands, shogun) extend the replayability
- Balanced in terms of difficulty (single-player only, I have not played multiplayer)
- Sense of exploration
- Sense of dread when the greed come at you
- Balanced upgrade/customization system - satisfying while not becoming excessively tedious
I did not like
- Some bugs in terms of building placement. My return portals failed to give the "build" structure many times due to some building proximity constraints I don't understand.
- Lack of meters to help you understand various important metrics (e.g. horse stamina, money saved in the bank, days until winter, etc.). There are some visual cues in the environment, but I don't find them always to be as obvious as what I need.
- Order in which workers perform tasks can be particularly frustrating in a time-sensitive game such as this.
- No indicator of how many farm plots will be utilized when building a farm.
- Winter season is particularly tedious. The berry bushes always seem to spawn extremely far from my camp so I spend tens of daily cycles running back and forth across the entire map trying to get my farmers to forage (which some refuse to do for some reason).
- Lack of full help guide/user manual in-game
- Lack of controls mapping
Closing thoughts: Kingdom: Two Crowns and the expansions are a wonderful addition to the Kindom series. Great work to the team who worked on this. I look forward to your next game in the series!!!