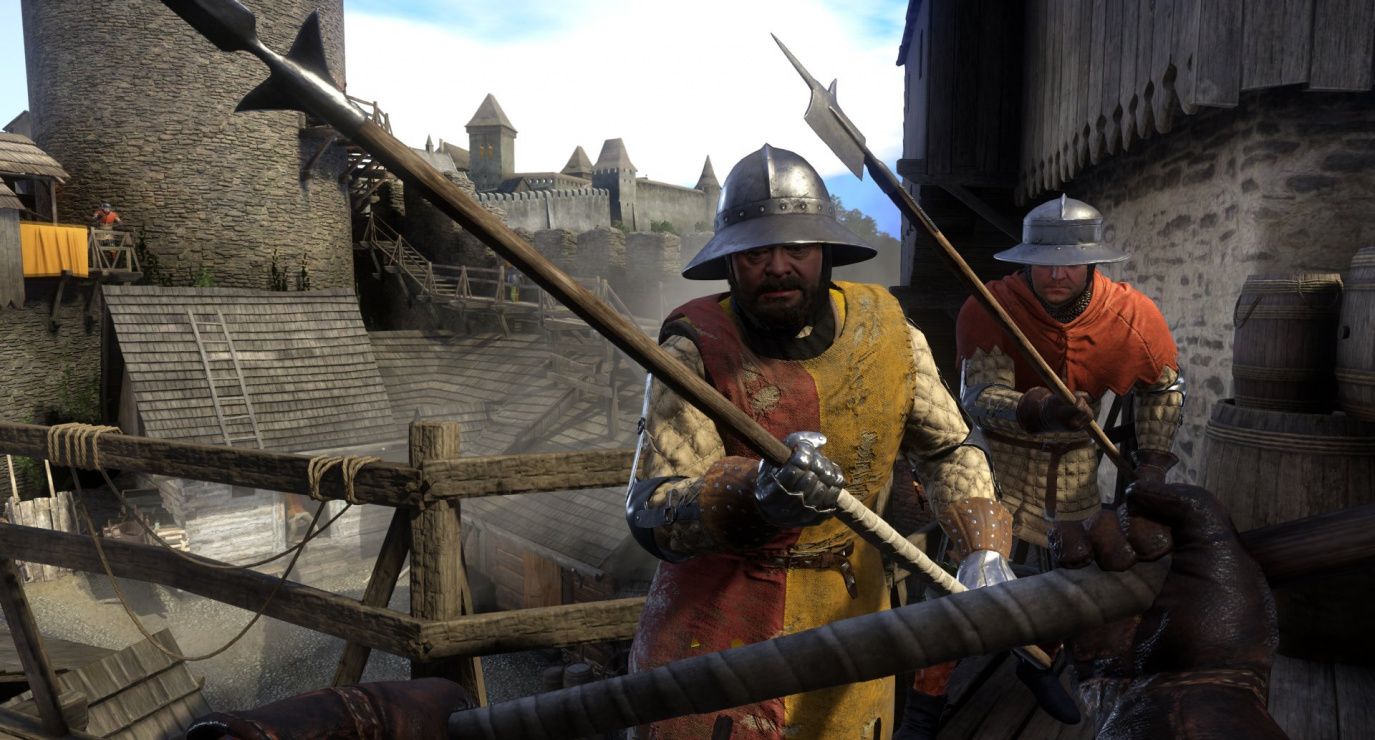 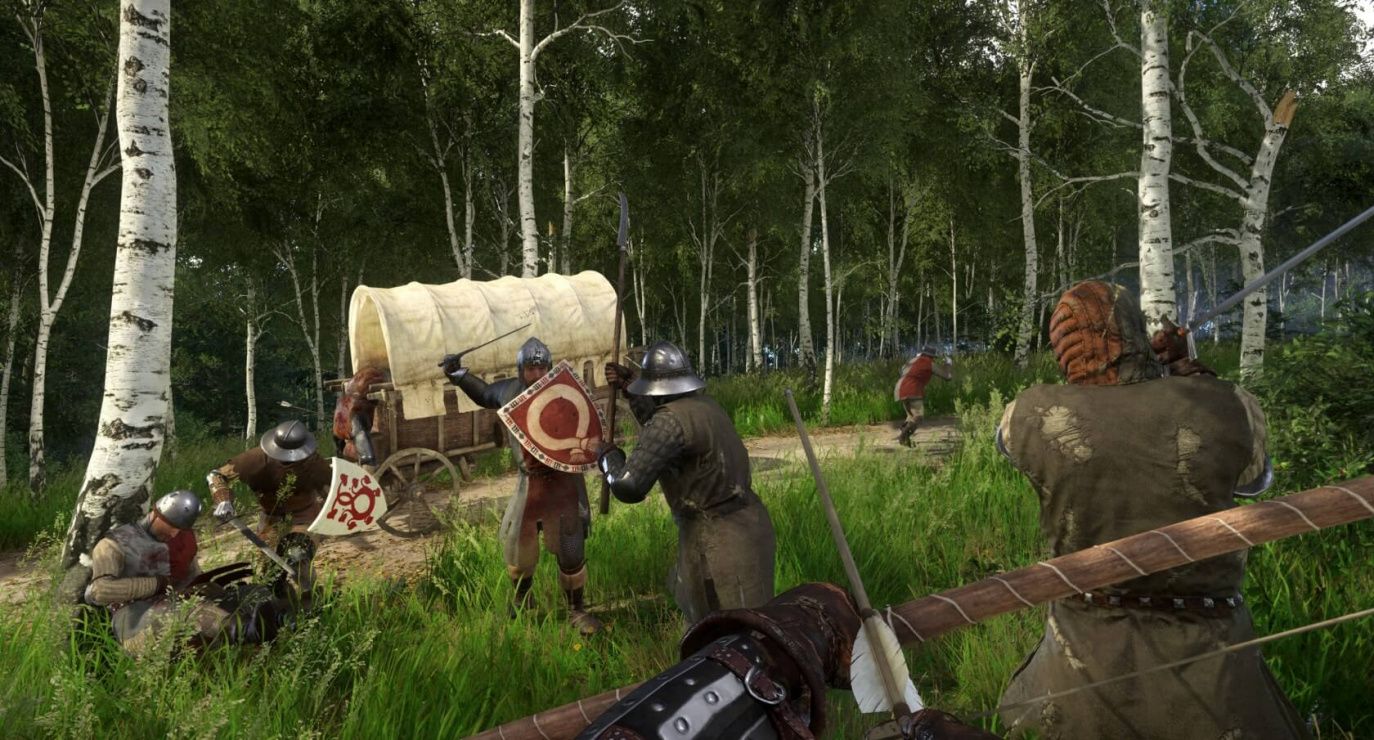 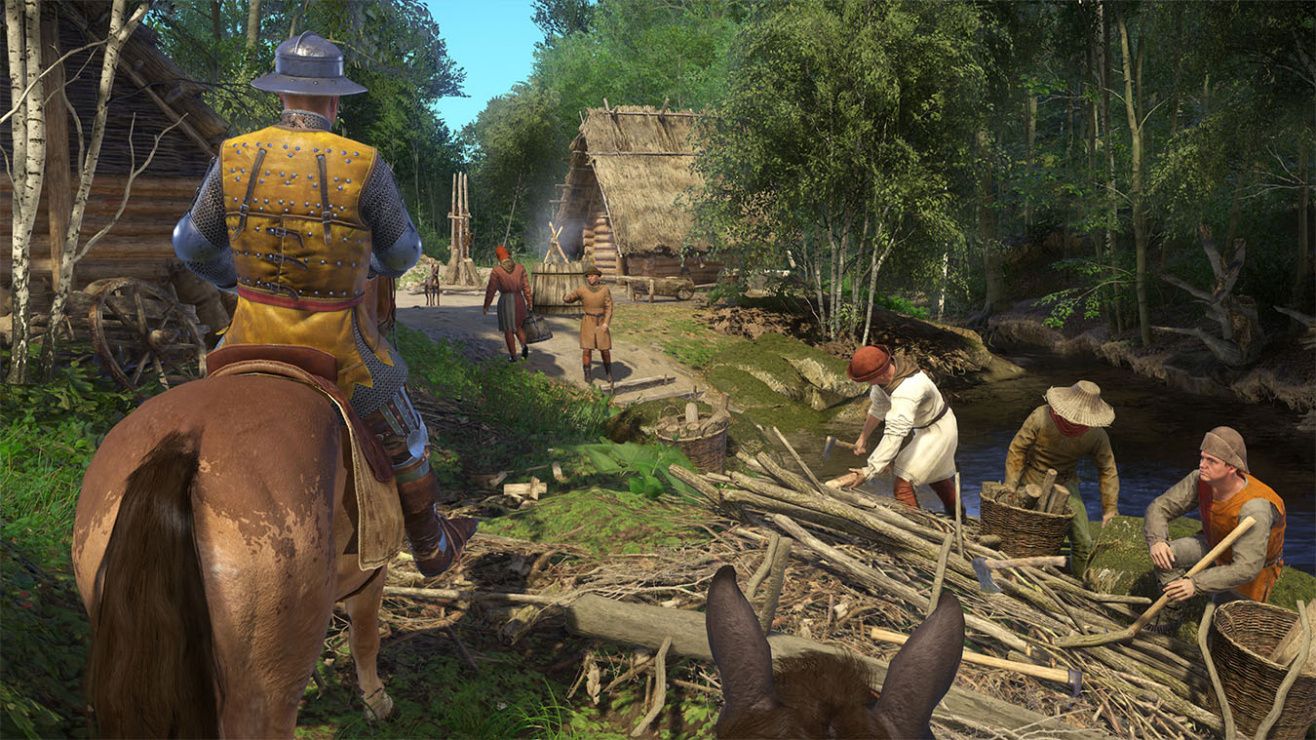 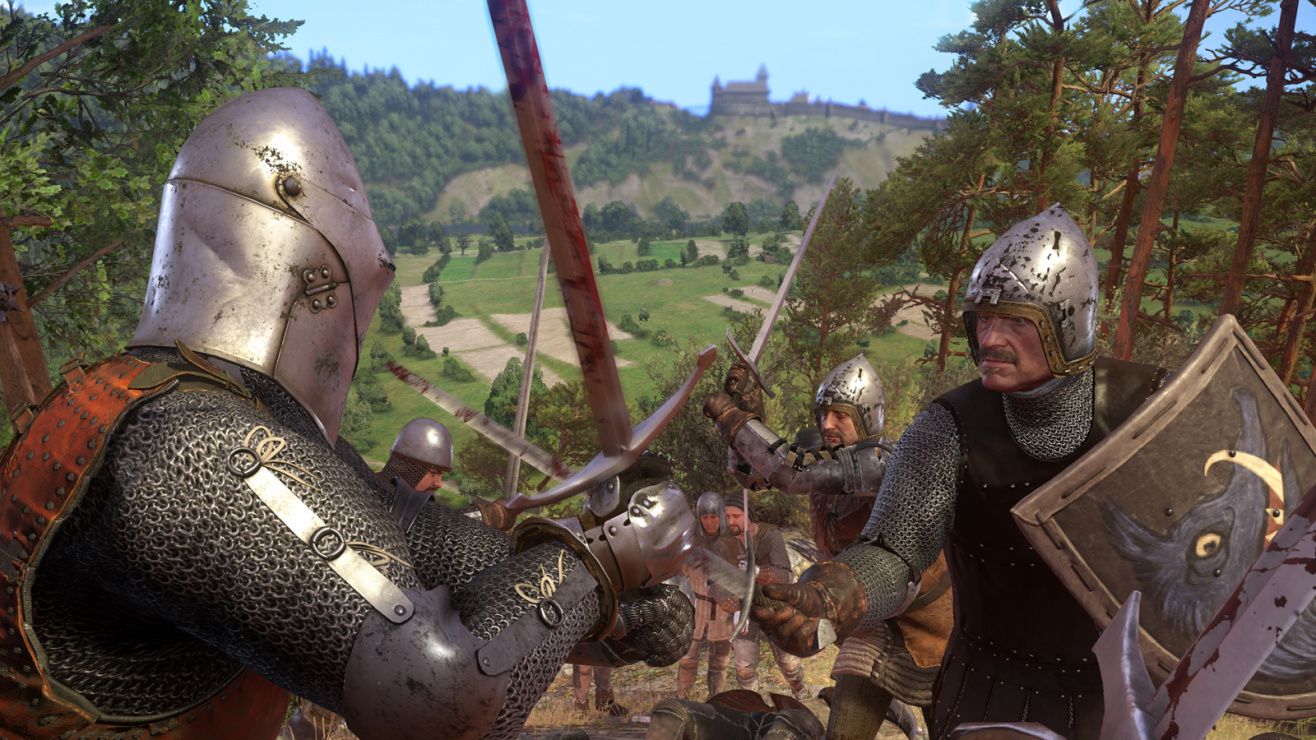 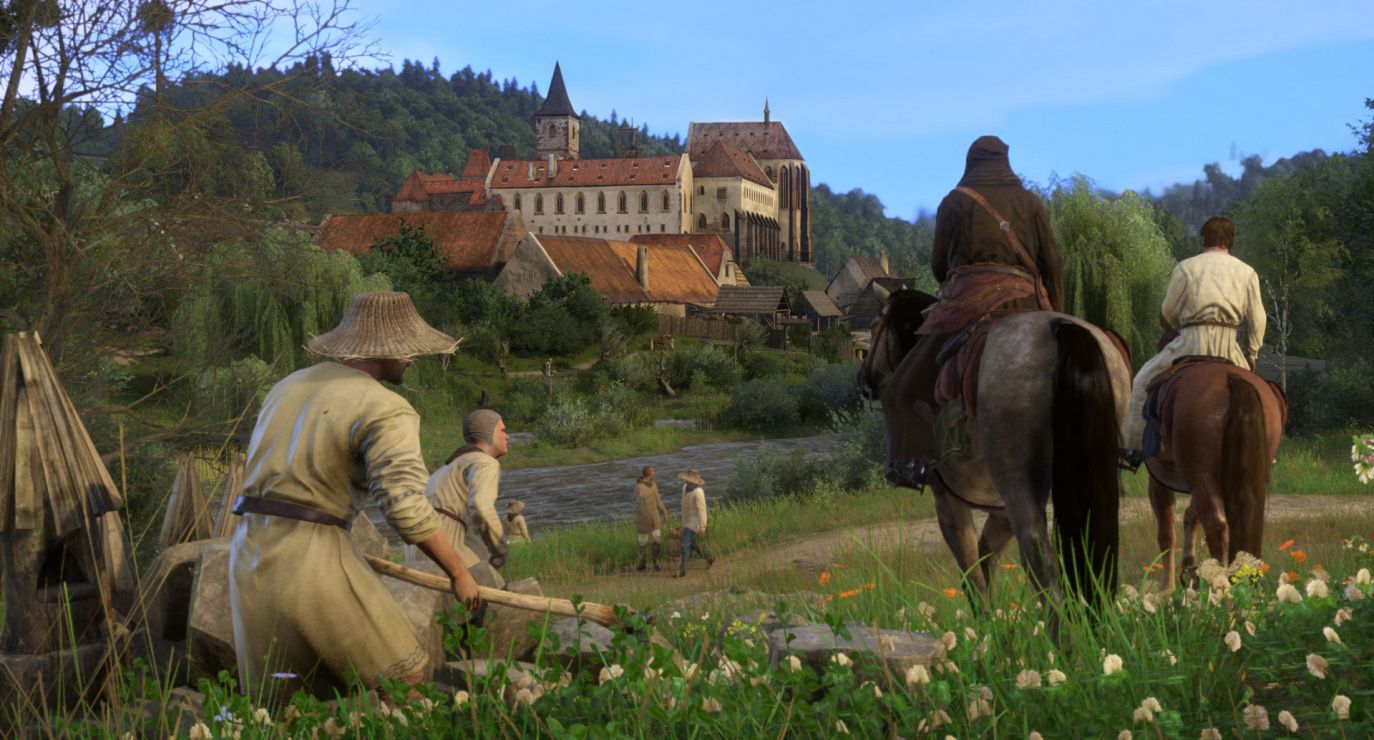 One thing you need to understand before buying and playing KCD, you suck..at everything.
Dialog, combat, hunting, trading, sneaking. You're going to be terrible at it. Each skill has a level attached to it including combat. Almost every negative review I see comments on the "terrible combat"
These people don't understand the system. Out numbered in a fight? Fall back to a position that benefits you and play smart, use your bow, poison food in enemy camps to get an upper hand before engaging. Burn their arrow crates making their archers useless. This isn't Skyrim, you can't just spam left click and expect results.
You play as Henry who has no skills or talents when you are given control of him, you actually have to go out on your own and take reading lessons if you want that skill.
Take your time, use the combat skills the trainers TEACH you. Maybe a sharp sword isn't the best weapon for fighting an enemy in full plate armor, pull out that spiked mace baby.

This might be first game that really felt medieval without feeling like fantasy. There is not much I didn't like. It's not a simple game and it doesn't hold your hand all the time. Failed quests stay failed, you can't save every seven seconds, your actions have consequences. Archery is not easy, fighting is not easy and you have to learn stuff to overcome problems. But it's all worth it for the overall feeling and atmosphere you get.
The story is one of the best I ran into and it kept me interested all the time. There is so much content in the game, that I completely forgot that there are DLCs. This is not a game you will finish in one day, if you get into it.

Kingdom Come: Deliverance is a historical fiction RPG with no magic. The melee combat system is uber-realistic, difficult to master, but very rewarding when you do. The landscape is the best I've ever seen in an RPG, by that I mean the closest to what you actually see hiking trails in the real world. The forest sounds are very immersive. Your character is more of an average guy that must claw out a living while seeking justice after his very-average-apprentice life is turned upside down by historical events. The game is a little buggy, even clunky at times, but with a good system to back it up plays smoothly the vast majority of the time. The plot is entertaining: no amazing Witcher-esque drama, but a very believable plot of tough men caught up in larger events and trying to protect their corner of Bohemia.
Pros:
-Extremely detailed landscape, vegetation, and textures. Trails have wagon ruts, horse turds, realistic puddles, and mud. Terrain is organic and not angular. I am reasonable sure the game world follows a real-world survey of the modern location in the Czech Republic.
-Tough, gritty, realistic melee. Uses reemerging European martial arts from the period. Weapons include 2H sword, 1H sword, axe, or mace paired w/ shield, polearms, bow+arrow as ranged weapon.
-Realistic horseback riding
-Eating/Rest needs, as well as drinking alcohol skill tree
-Living period towns with well-fleshed NPCs
-TOUGH COMBAT SITUATIONS! You can die at any time if not careful. Outnumbered 4 to 1? You have to be really good at the game to survive
-Reasonably smart AI: enemies reasonably capable of tracking you down; no Skyrim-style shoot, hide, shoot again
-Lots of sympathy for the main character, who is more of an average joe who becomes tough rather than a god-like dragonborn-type
-Protagonistic authority figures realistic and pragmatic leadership. Refreshing change from hollywood/pop-culture stereotypes
-Pretty good wildlife behavior for hunting. Exception, rabbits
Cons:
-Perks could be better, max level reached quickly
-Some quests have bugs that require reloads
-Bow and arrow sighting could be improved. Even with no reticle, aiming down the arrow could be tighter
-Some cliche conversations and plot elements
-Saving system is difficult on purpose. Lots of failures and reloads in the beginning. Teaches you to not rush into things, however.
I have been gaming since the early 80's and KG:D is in my top 5 RPG's of all time. It is a must-try for RPG fans or medieval enthusiasts. Outstanding vision and work by the dev's, we need more projects like this in the gaming community! Give it a try!

143 Hours and finished the main story for the first time
bought on release day and finished just recently,so a bit of down time in between sessions.
I loved it,i hated it,the perfect combination,this game is not for the meek,its tough,but,rewarding experience.
i see a lot of complaints about fighting is impossible or the like,absolute rubbish.if you are a lvl 2 swordsman trying to fight seasoned veterans,if you get out with your life intact,you have done well.once you know what your doing,its another matter.
until then,run like hell !
if your about going out looking for trouble,well,you will find it,and,you will eventually meet your match someplace.best have a bag full of schnaps handy.
Enter the tourneys,Pick locks,drink and gamble,read books,all increase your skill pool in said areas and all come in handy towards progressing.
I specialised in the Longsword from the beginning and spent hours and hours with the trainer.this is fundamentally important to learn how to fight.
understand and practice your learnt combo's is a must
learn how to dodge,parry/riposte,block etc
not easy at first,persevere and increase your skill level ,assign perks you aquire with thought.
read the friggin descriptions of said talents and use it with the appropriate weapon type
the combo's are the best part of the combat game,practice them,so rewarding to successfully pull them off,they look great.
Potions are a must and can turn any battle to your advantage,fighting multiple opponents especially,learn how to make them and understand their usage.some can be applied to equipment.
Armour choice is also a factor in being quick or being resillient.multple sets of clothing in the wardrobe is a good idea,a use for all occasions.i am particularly fond of my night time garb,for sneaking around in the shadows.
Tip;Ride your Horse a lot,buy a new one when you find one that suits your needs.
Main Story is impressive,a very historical approach to period, traded off against game play,i think well done.voices and music, all sounds are top notch
Visually the world is so immersive,you need to take your time and enjoy it.
plenty to do and plenty to screw up,multiple ways to achieve an objective.
probably for the more mature player or certainly some with an interest in the period of history,the codex entries are very educational if you bother to read them,kudo's.
i played the game with none of the DLC's in my library,a fine game to have in your collection as it is.
i think i will buy a couple of the DLC's now and replay the game with better knowledge.
these type of games are very rare in the gaming world,well worth consideration.
looking forward to the obvious continuation of the story.
Superb 9/10.

Broke into someone's house while completely drunk. Burping, hiccuping and farting every few seconds.
Knicked everything in the house but messed up knocking out the residents so I took off, hoping the guards didn't see me.
As the guards were kicking my ass random peasants starting saying "HEY, HENRY'S COME TO SEE US" and overjoyed to see their beloved village idiot getting a surprise shortsword rectal exam.
Managed to run away and use my special alcoholic powers to get me out of this situation. Drank my weight in spirits and wine as guards kept chasing me and thankfully managed to drink myself into unconsciousness.
Since Henry honed his alcoholism skills he became a Master Alcoholic so he somehow teleports to a random location every time he drinks himself to oblivion.
When I woke up with a massive hangover I rejoiced as I was safe and sound with 120Kg of stolen loot and missing 5 pints of blood.
As a reward for another job well done I decided to treat myself with some illegally gained cheese. It was spoiled so I got food poisoning and died.
Great game, would highly recommend.

Kingdom Come Deliverance is the only game I have ever played that i have officially dubbed:
"Realistic Medieval Life Simulator RPG". Firstly, the game is great, regardless of what anyone else says about bugs and combat being impossible. (I'll address this in a moment.)
Now before jumping to conclusions, no, this isnt skyrim, no you are not the dragonborn, nor are you the destined hero, or the prodigy warrior.
you're a peasant named Henry. Now put yourself in Henry's shoes, a mid-twenties 14th century villager with no combat or life experience other that MAYBE helping his dad forge swords from time to time, otherwise he's a drunk who plays pranks, and enjoys life. Suddenly shit hits the fan when a major event unfolds.
You are cast into a world, with no experience, no gear, no remorse, and no one gives a damn about you and your problems. Now, that is to say, you won't be useless forever, everything takes time and effort, and if you're really committed you can learn how to become better at combat, better at protecting yourself, better at archery, and so on.
just remember to ask yourself these questions:
- What would Henry do?
- Will doing THIS piss off that person? (if you have to ask, yes, yes it will.)
- No, people do not leave their belongings scattered around to loot at your own free will. Will I become a thief? where can i learn to pick a lock? stealth? pickpocketing? you need to LEARN.
- Would i be able to survive a fight against 3 Bandits when the only thing i know about a sword is where the point end goes? Take it a step further, could I (That's you) fight 3 grown ass adults with at least 10 years of combat experience in a dark alley in RL?
Eventually, you'll just be a god knight cleaving your way through hordes of enemies and me a master at everything, but like everything, becoming a master takes time. Pace yourself, and BE HENRY, learn, play, adapt, and triumph.