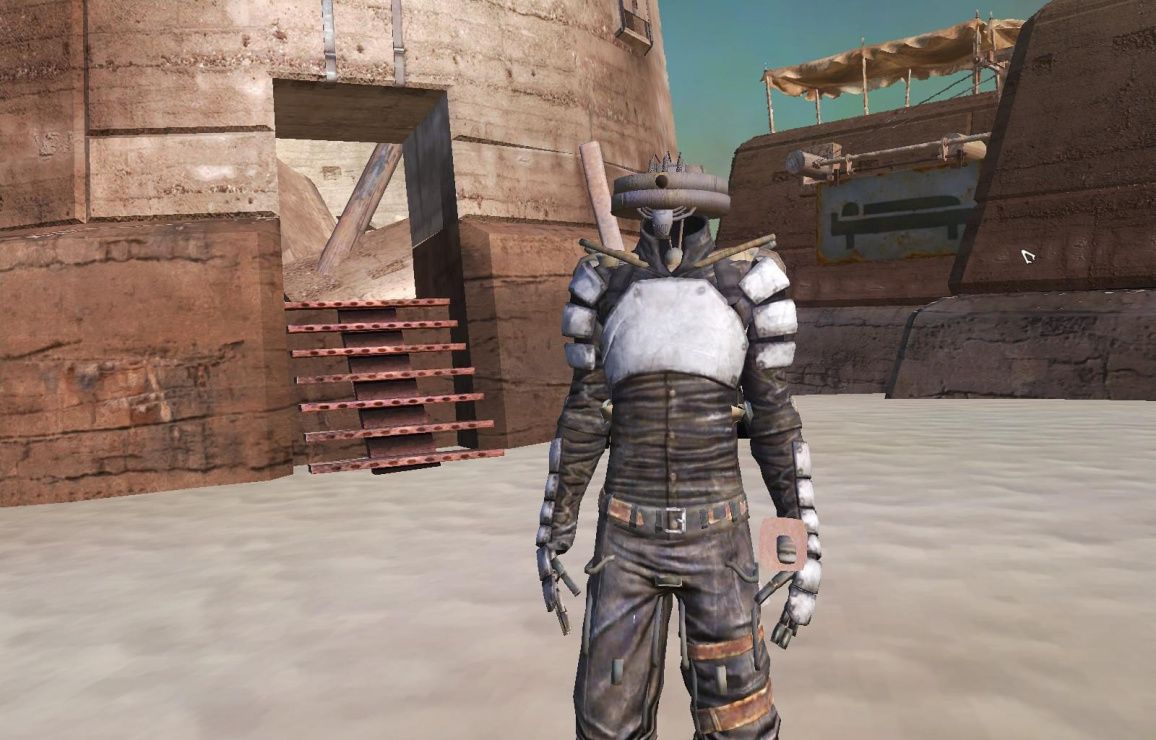 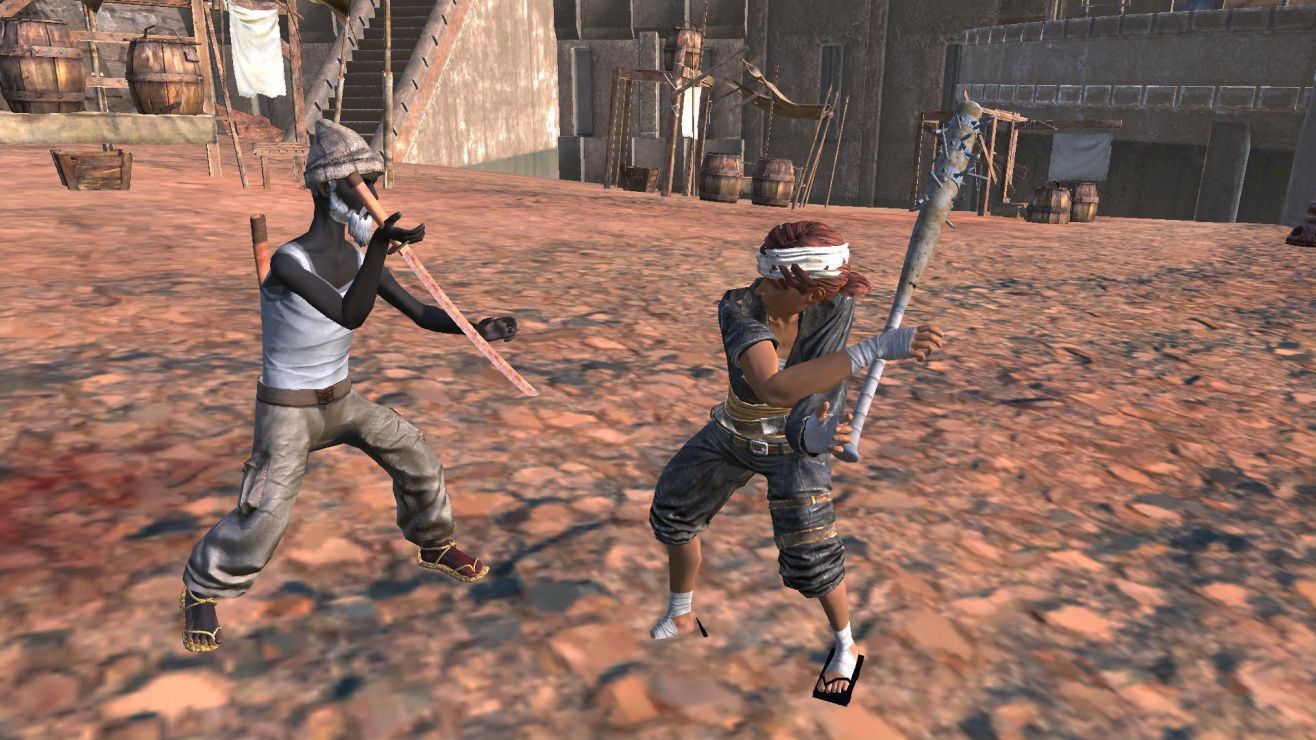 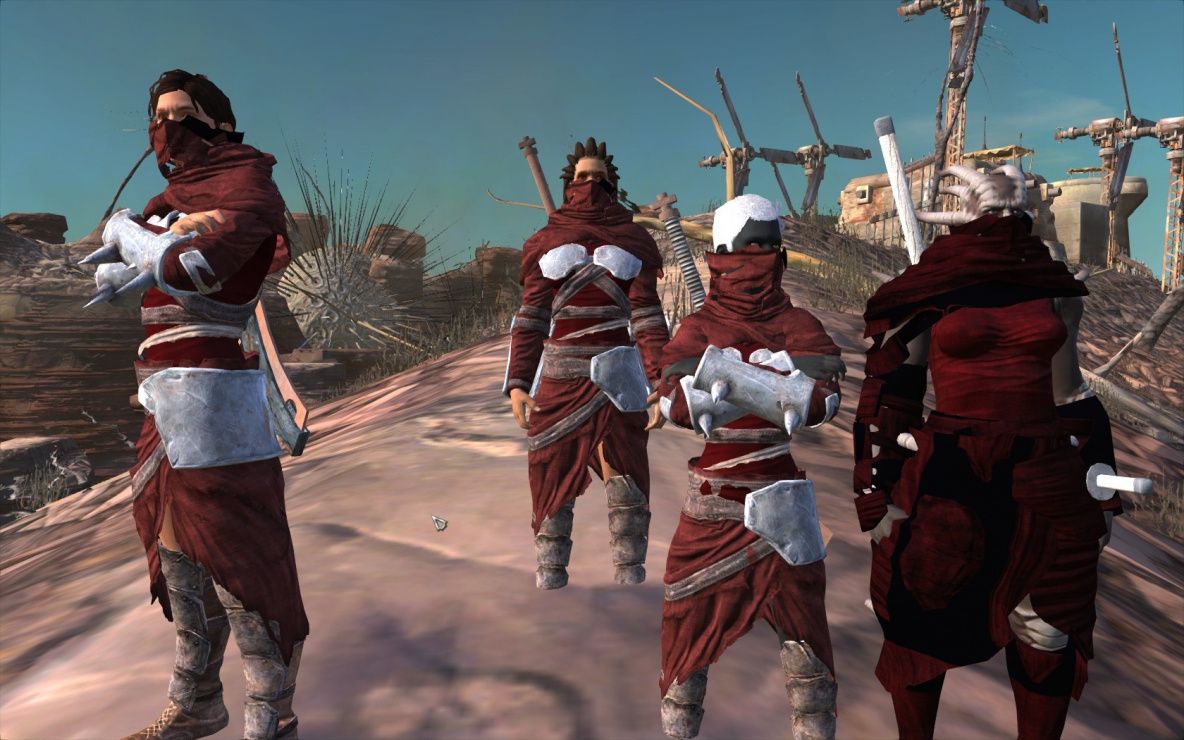 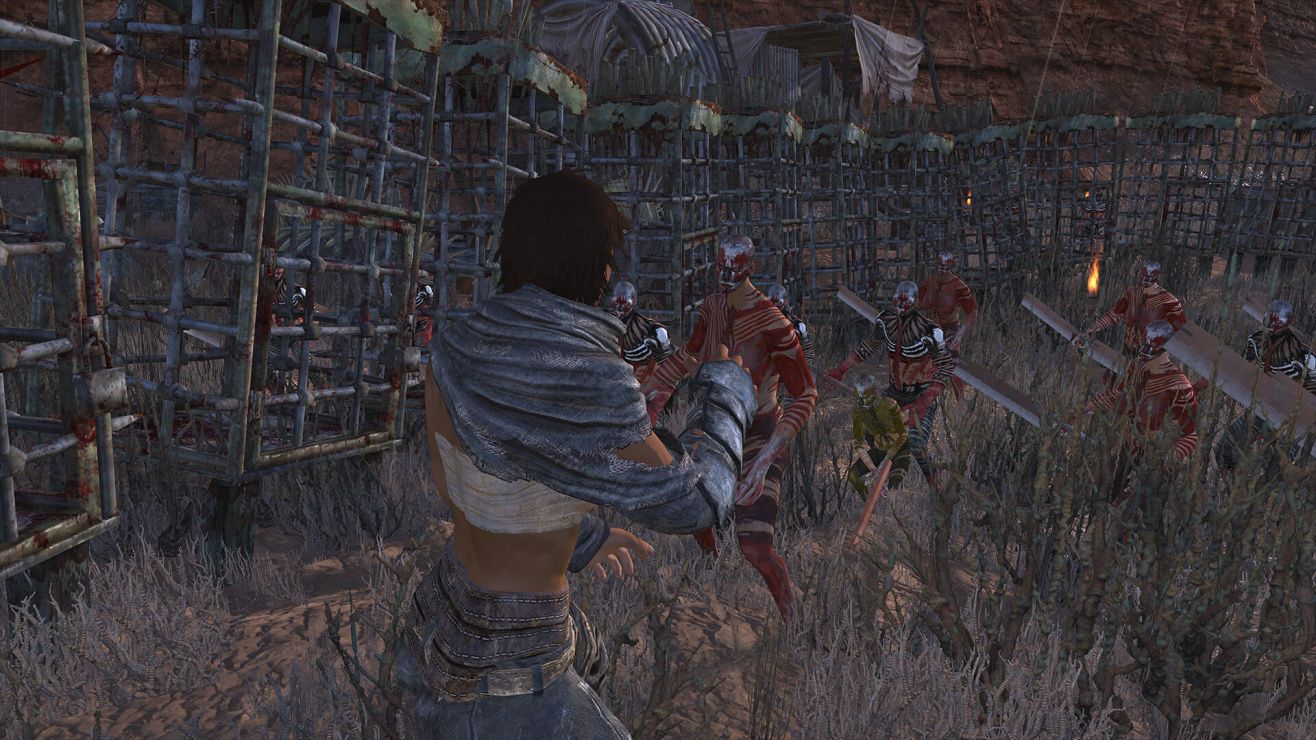 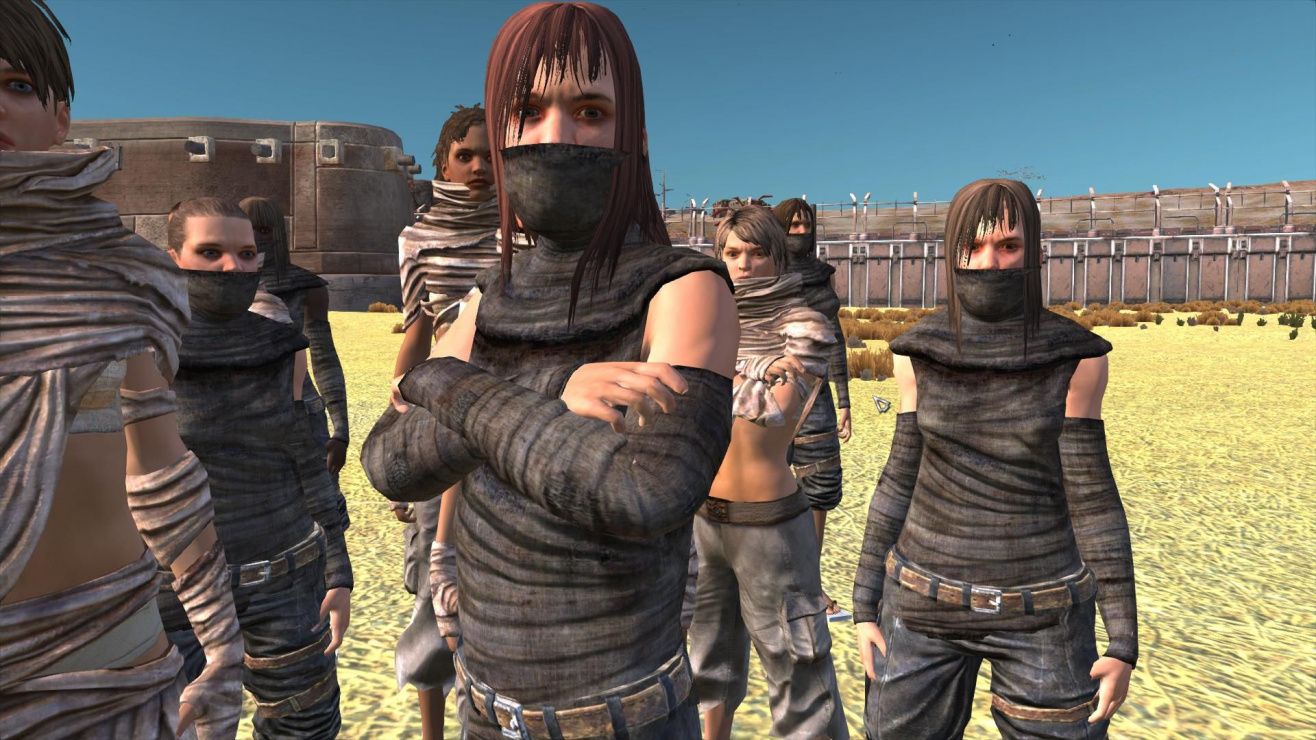 PC Steam rpg strategy survival open world sandbox building
A free-roaming squad based RPG focusing on open-ended sandbox gameplay features rather than a linear story. Be a trader, a thief, a rebel, a warlord, an adventurer, a farmer, a slave, or just food for the cannibals. Research new equipment and craft new gear. Purchase and upgrade your own buildings to use as safe fortified havens when things go bad, or use them to start up a business. Aid or oppose the various factions in the world while striving for the strength and wealth necessary to simply survive in the harsh desert. Train your men up from puny victims to master warriors. Carry your wounded squad mates to safety and get them all home alive. Features Freeform gameplay in a seamless game world in the largest single-player RPG world since Daggerfall, stretching over 870 square kilometers. The game will never seek to limit you or restrict your personal play style. Custom design as many characters as you want and build up a whole squad to fight for you. Characters will grow and become stronger with experience, not just in their stats but their appearance too. Original take on the RTS-RPG hybrid genre. No "hero" characters with artificially stronger stats than everybody else- Every character and NPC you meet is potentially an equal, and has a name, a life. You are not the chosen one. You're not great and powerful. You don't have more 'hitpoints' than everyone else. You are not the center of the universe, and you are not special. Unless you work for it.
Share Share Share
Promote for 50G

When I first loaded up Kenshi, I thought I had made a mistake.
I knew the graphics were not great, but I didn't realize just how jank the visuals actually were until I saw them. Worse, the game was pushing my aging laptop to the brink of overheating, and the game was, despite the seemingly low-tech visuals, not running well. The interface was one of the ugliest I'd ever seen, and was totally obtuse. I had no idea what I was doing or where I was supposed to be going. The game's spartan tutorial suggested mining outside of town, so I went with that. It was slow. So painfully slow. I increased the game speed and promptly got attacked by about ten bandits with clubs. As the game's weakest enemy beat me to a bloody pulp, I considered refunding the game, but the game's tutorial brought up another window - I wasn't dead.
When my character came to he was in bad shape. Luckily, he had started with a first aid kit, and he bandaged his wounds and limped back to the tiny town with only one shop. As he rested, I checked his stats to see what went wrong in that fight. His stats were all 1's, with the exception of his Toughness, which was now a 6. That was just the beginning of my understanding of Kenshi.
In Kenshi, there is no generic pool of "Experience" that you get that you can just dump in to whatever stat you want. You can't go out and fight bandits for experience and dump the experience points into your mining skill. If you want to get better and mining, you have to mine. You have to mine a lot. The same goes for any skill. If you want to fight, make weapons, grow crops, or sneak around, you have to give your character time to be terrible at it. And once you learn this system, you can learn how to exploit it.
Want to become a martial arts master? Build a Prisoner Cage. Catch a bandit. Heal him. Feed him. Protect him. Drag him out of the cage every once in awhile and beat the shit out of him and then put him back. It seems cruel. A few days ago this guy was slashing at you with a Horse Chopper so it's fair. But be careful, his Martial Arts skills are going up too! If he beats you, he'll head of the hills and you'll be starting from scratch with a new sparring partner, and you won't get better fighting an unskilled opponent.
Want to get stronger? Fill two backpacks full of Iron Ore and give one to a friend. Then, pick up said friend and carry him around. Walk back and forth in town for as long as you want. Your character actually bulks up visually as you gain strength.
Of course, you don't have to learn to fight if you don't want to. Why not build a base in the Holy Nation, and start farming? You can make tons of money cooking advanced foods and selling to the surrounding towns. You can do this forever if you want. You'll have to fight or flee from the occaisional animal or bandit attack, and you'll have to deal with Prayer Day (the best day!) Don't like Prayer Day? Feel free to go live somewhere else more dangerous. Each area has its own features and hazards, from rampaging slavers to acid rain and giant dinosaur death machines. You can look up each area online, but in my opinion, learning where you should and shouldn't go from experience is a huge part of the fun.
So what brought about my change of heart with Kenshi? The realization that my character was nobody until he earned everything he had. Every coin, every stat-point, every brick that made up his shoddy looking base was earned. The game didn't magically dump them on me in some plot event or through some level-up perk. He trained, he labored, he scavenged, he seized opportunities. He started his own faction and they ran from danger until they got tired of running, and built an impregnable fortress a few hundred yards from the starting town, and barely scratched the surface of the game.
Also, mods. A Dark Mode interface mod to make the UI easier to look at. A graphics mod to reduce ground clutter for my ancient laptop, improving performance several times over. You can get mods that change the way the world behaves, add new weapons and items, and even new locations to explore.
So do I recommend Kenshi? Absolutely, but just remember that like your character in the game, you have to play by its rules to enjoy it. If you can't get past the graphics or the cumbersome interface, give this one a pass. If you want a power fantasy where your character can take on an army, well, you can get there, but its a grind. If you want a sandbox that rewards experimentation and exploitation of the gameworld and the rules, this is your game. Just remember that it can take awhile to get used to.

Starting off, I noticed the brutally-oppressive town guards would beat the hell out of nearby bandits and undesirables, but then just leave them bleeding out in the sand. I was horrified, I had to do something, but often these unfortunates would die from their wounds before I could haul them back to town and sell them into slavery.
So my first recruit was a medic to help me to stabilize them long enough to survive the trip back to the flesh peddler. 200 hours later and I'm heading up a 50-man drug cartel out of a massive walled compound. Your own journey can (and more than likely will) look much different. This is a true sandbox and a gem if you don't mind, or relish, making your own fun.

This game is best described as an hidden gem.
Like me, most players that play this game, did not want to play it at first. They saw the graphics and thought they were crap. That's ok... So did i!
BUT after.... *cough* Jacksparrowing it *cough* in order to try it first I fell in love with the game in the first hour, so i bought the game instantly.
This game give you a unprecedented amount of freedom.
You hear this from games all the time, where they say: You can be a trader, you can be a warrior, a king, a builder, etc etc etc. and in most cases... it's not true at all. BUT !! in the case of kenshi, you really can be almost everything you want. You want to be a baker ? WELL YOU CAN! research baking and shop counter, buy a little place for yourself build an oven and start cooking. Buy or plant your own crops in order to cook. You want to be a trader? buy here sell there for more... it WORKS ! you want to be a drug dealer ? Well... without spoiling much.. Go to the swamps or build your own hemp crops.
Look i could go all day. The point is.. what you can be in this game is limitless. Specially with mods, there are tones of great mods!
Gameplay/Mechanics 10/10
Graphics 5/10
Replay value 11/10 (yes 11)
Updates/patches 10/10 (devs patch the game frequently)
MODS: 11/10 (More mods than you can think of)
Hope this helps.
Please try this game, don't think its bad because of how it looks. ( and youtube videos don't make it justice. Trust me)

Set out to become the sword saint of the wasteland.
Get ransacked by starving bandits.
End up a miner.
Save up for an extra set of hands.
Buy a dog instead.
Raise that pup over months of mining.
Eventually form a lucrative mining crew to fund your silly pipe-dream of becoming a master of the sword.
Watch that vigilant pup live a life, filled with love and all the dried meat Cats could afford.
Watch starving bandits butcher your pup for meat while you're on a trading expedition in another town.
You get there in time just to watch her bleed out.
You pause the game to reload, when did you last save? When what the last auto-save?
Ditch everything to avenge your dog.
Sell more copper.

Just noticed I've got over 1000 hours in this game. Thanks COVID. I must like this game. Definitely got more than my money's worth. Oh, had Cyberpunk pre-ordered and downloaded the day before release, but still haven't played it because I'd rather play Kenshi. Hope that helps.