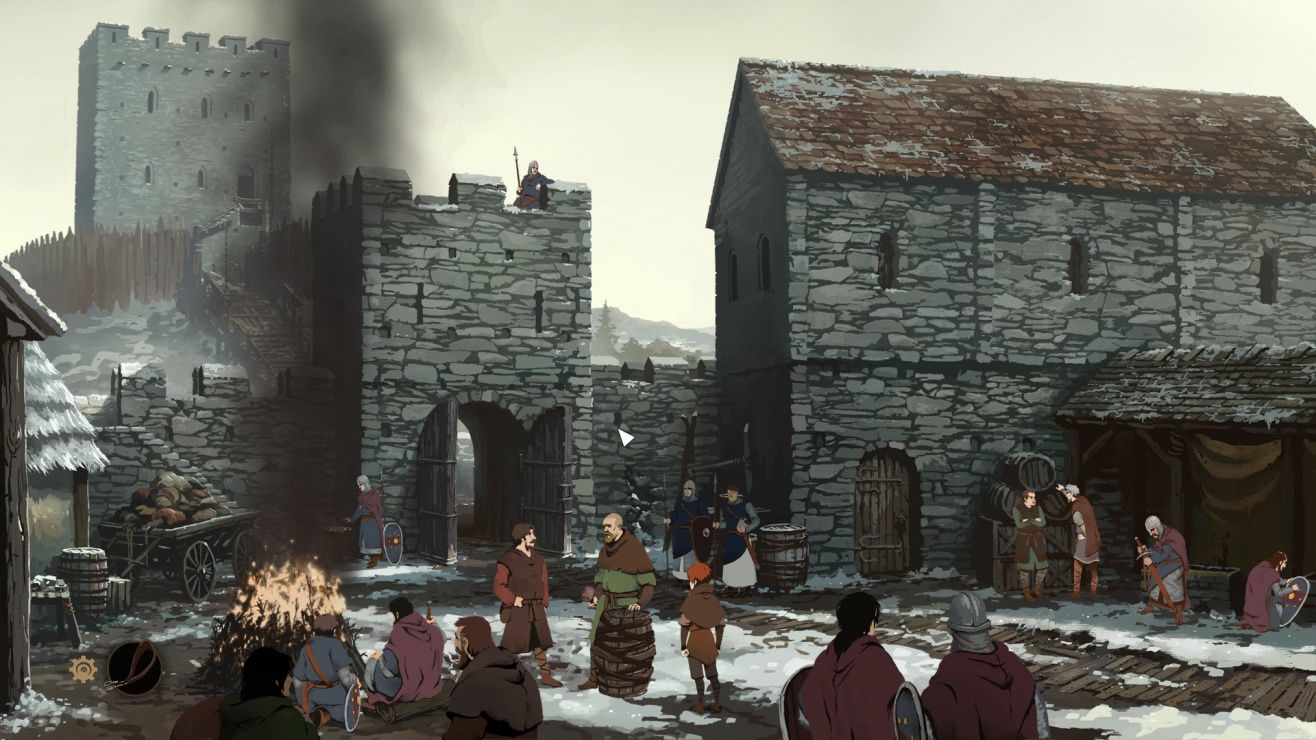 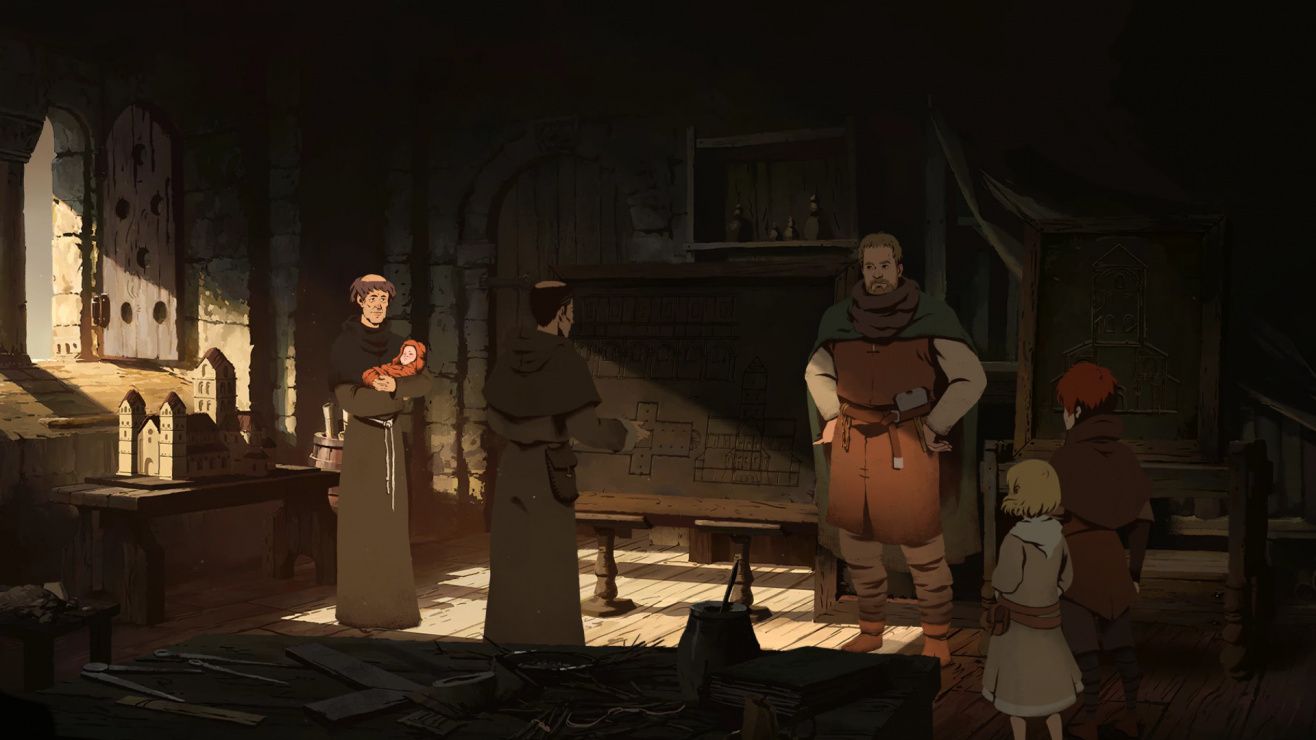 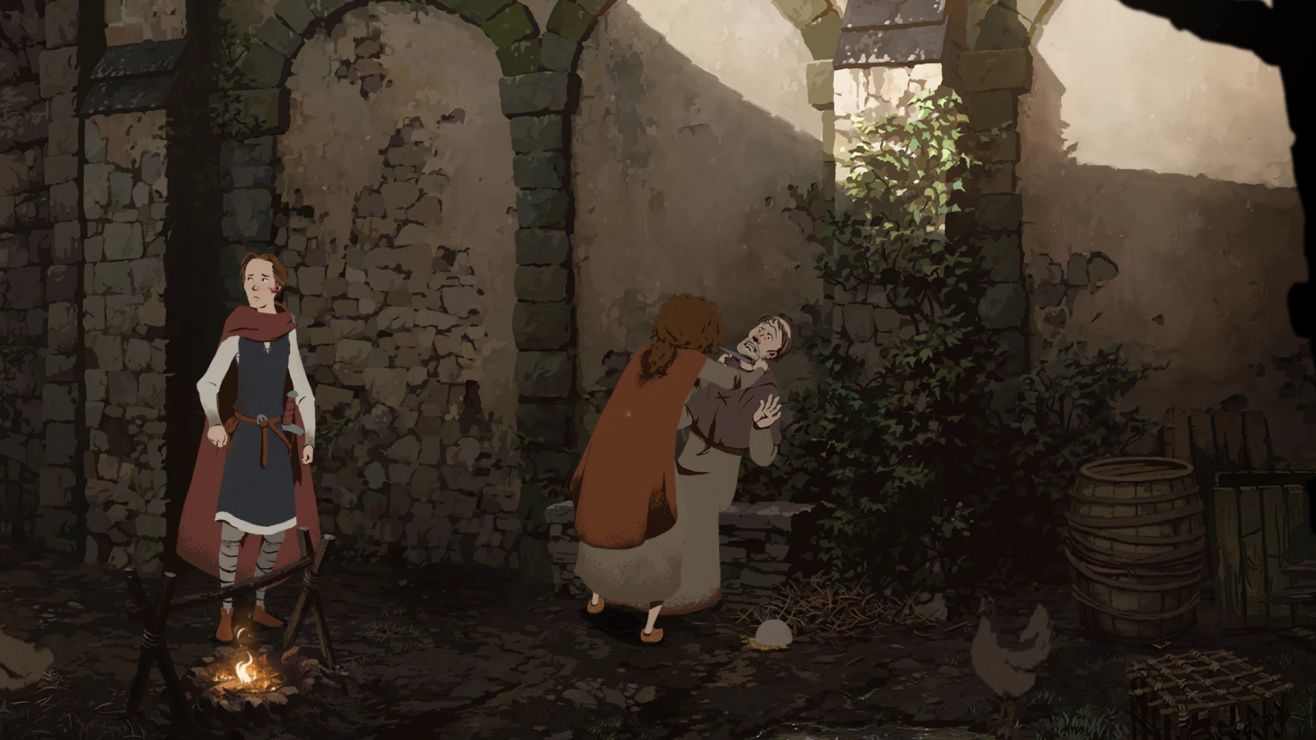 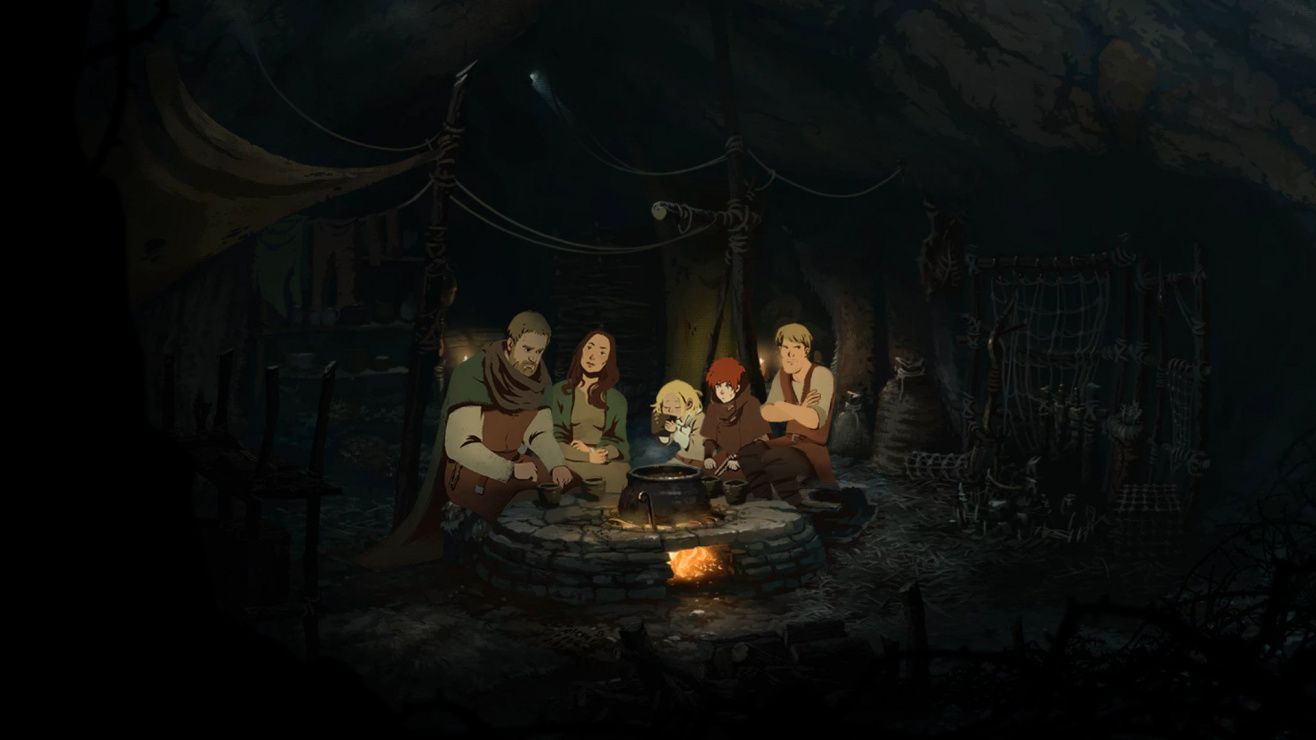 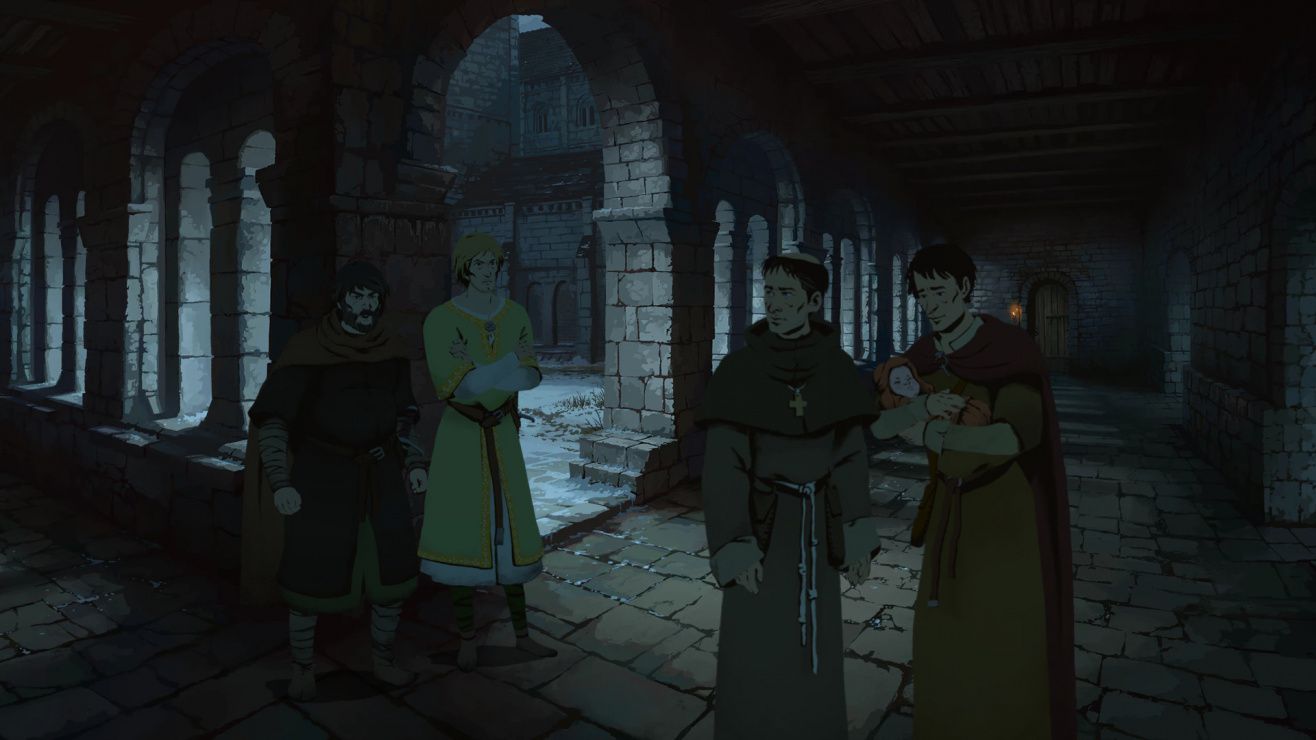 Ken Folletts The Pillars of the Earth

castle choices clicker indie medieval point quest story
Based on Ken Follett's world-bestseller, ‘The Pillars of the Earth’ retells the story of the village of Kingsbridge in a whole new interactive way. Play as Jack, Aliena and Philip and change the events of the book through exploration, decision-making and dialogues. 12th century, England: In a time of great poverty and war, a small town begins the construction of a cathedral to claim wealth and security for its people. In their struggle to survive, lives and destinies intertwine. Philip the monk becomes prior of the small abbey of Kingsbridge. At the same time, a boy called Jack is raised in the woods by his outlawed mother. His apprenticeship as a stonemason paves his way to become a gifted master builder. Together with the disgraced noblewoman Aliena, Jack and Philip begin the construction of one of the greatest cathedrals England will ever see. One of the most successful novels of all time, now adapted as a three-part videogame series.
Share Share Share
Promote for 50G

Wow.
I'll start off by saying I have no read the books. You don't have to in order to enjoy this game. I purchased this game about a year ago and lost interest due to the slow start. I recently returned to it, seeking something a little more relaxing. And it was, at first. The game itself isn't demanding. It's fairly linear, the puzzles are simple, the few QTEs are very basic.
The story, though. The beginning is slow but it ramps up quickly. I found myself absorbed, wanting to know more. The characters grew on me, the atmosphere drew me in, and the story tugged on my heartstrings. The game touches on many things, from religion to politics to love, and it makes you think about what living during that period of history might have been like.
The story, the art, the music, all of it is just fantastic. My only complaint might be that the dialogue can feel slow and the puzzles are fairly simple, but the pacing improves as the game progresses. I highly recommend this game to anybody who enjoys a powerful story.

Much has been written about this game.
I went in, not knowing exactly what to expect(I never watch the videos and try not to read many reviews on the store page ) and came away, enthusiastically applauding.
I love historical stuff and I love good stories. Combine those with GREAT voice acting art work and music and you have a winner...
Well also, it's by Daedalic and I have always been a fan.
I was lucky enough to buy it on sale, so probably wait as the regular price is a tiny bit pricey.

Ken Follett's The Pillars of the Earth
Pillars of the Earth is a beautiful masterpiece. In aspect of gameplay it's very similar to Telltale games, but this is now one of my favorite episodic games. I'm definitely going to keep an eye out for more Daedalic games. I gotta say I haven't read the book, but you don't have to to enjoy this game. Story setting is England 12th century- if you're interested in medieval history I recommend this game.
Story is slow paced at beginning which might turn away a lot of people, but after finishing a few chapters I got really absorbed until the end. Very emotional and mature story- one of those games that will make you cry. Visuals are a work of art and it really gave that medieval feel of harsh reality during that time. All praise to voice acting, really well done.
There are few major choices that can impact the story, but not the ending itself since it still follows the novel. I liked side tasks- it gave more depth to the story and depending on choices you make how other characters will act. This game really stands out on character development.
Verdict- I rate 10/10. I can't think of any cons. I suppose this game can be plain boring to people who prefer action or more fast paced games, but that's not my point of view.

This is a game I highly recommend. It is story-rich and very in-depth. It was originally a novel by Ken Follett. The Pillars of the Earth is a historical novel by Welsh author Ken Follett published in 1989 about the building of a cathedral in the fictional town of Kingsbridge, England.

Pros:
-Excellent Story. Keeps you engaged until the very end
-Just like a good book, I had a tough time putting this one down
-Visuals are lovely, very nice to look at
-They nailed the setting. You feel like you are in 12th century Europe
-Choices matter. Characters live or die based on the choices you make
Cons:
-Starts off a little slow
-Sometimes cutscenes can be long and drawn out.
I audibly gasped at times in this story, came DANGEROUSLY close to crying at times, smiled from ear to ear, experienced great satisfaction at the ending, and felt sad for the characters at times. Overall it was a wonderful story, and I definitely recommend it to anyone who is a fan of story games.

Easily one of the best story I've seen in a videogame. This is what happens when you take the work of really talented writers like Ken Follett instead of the just-good-enough-for-a-game writing or -worse- the focus-tested garbage we see nowadays in so many AAA games.
It takes very down to earth themes and turns them into a very compelling adventure that spans over 30 years, thanks to very good writing and characterization. I'm usually not a huge fan of medieval and religious stuff, but this hit all the right spots for me. It totally took me by surprise and I couldn't stop playing until the very end.
As for the gameplay, it's definitely not a classic point n' click and feels more on rails like modern games, but I feel like they've somehow achieved a nice balance between the two, so it never got boring because of this. Oh, and it looks and sounds absolutely stellar. Very reminiscent of what a modern Broken Sword game could be, which is a damn good thing !