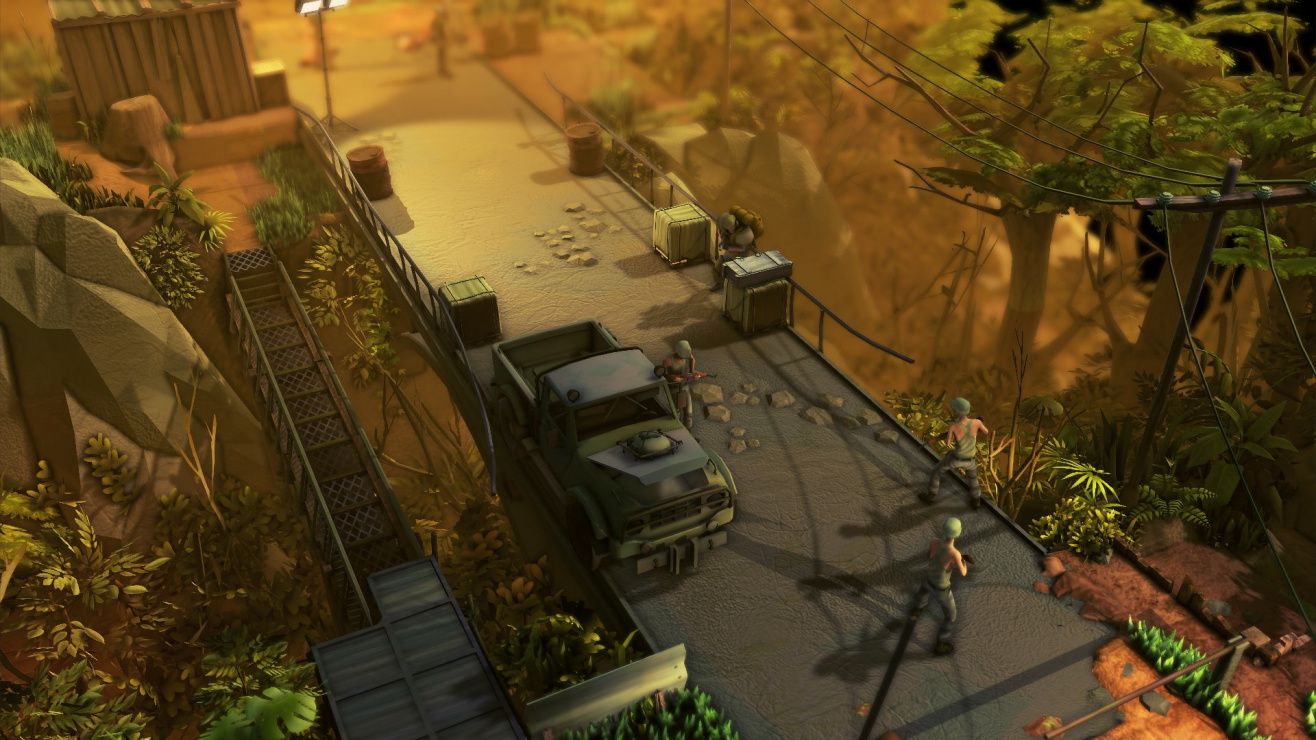 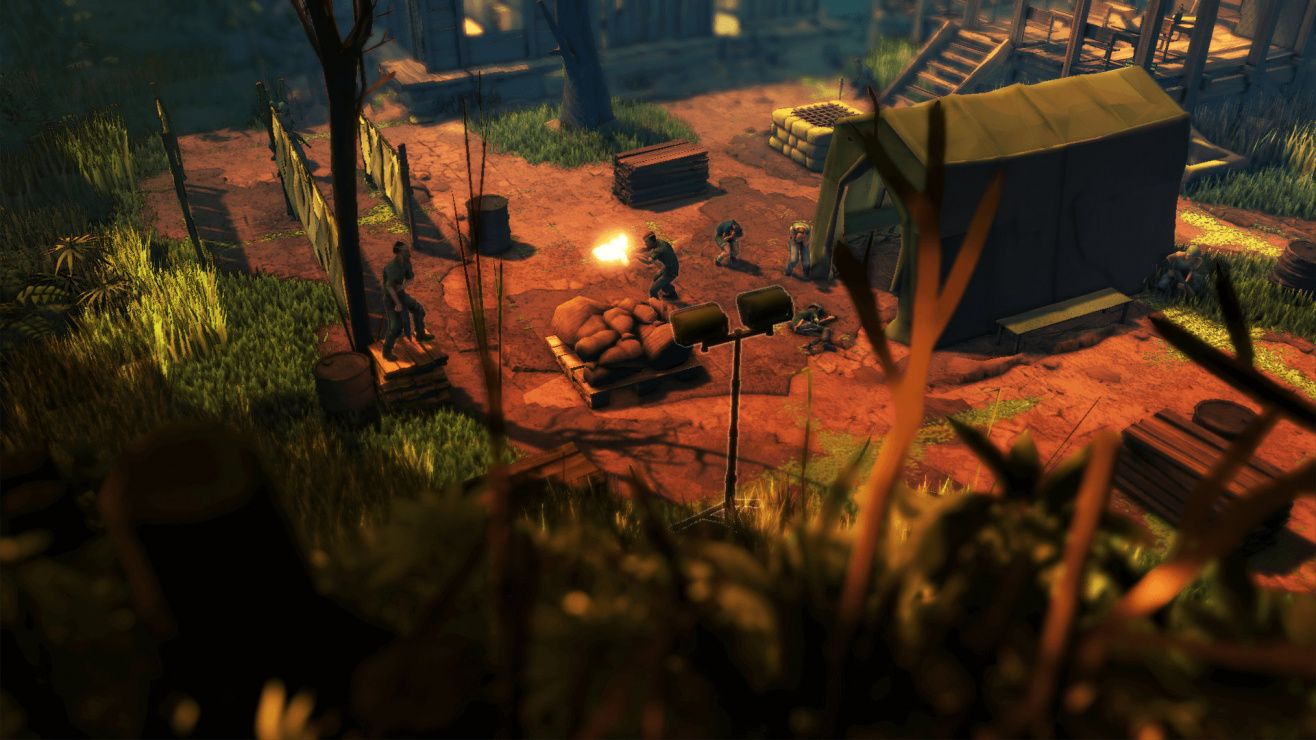 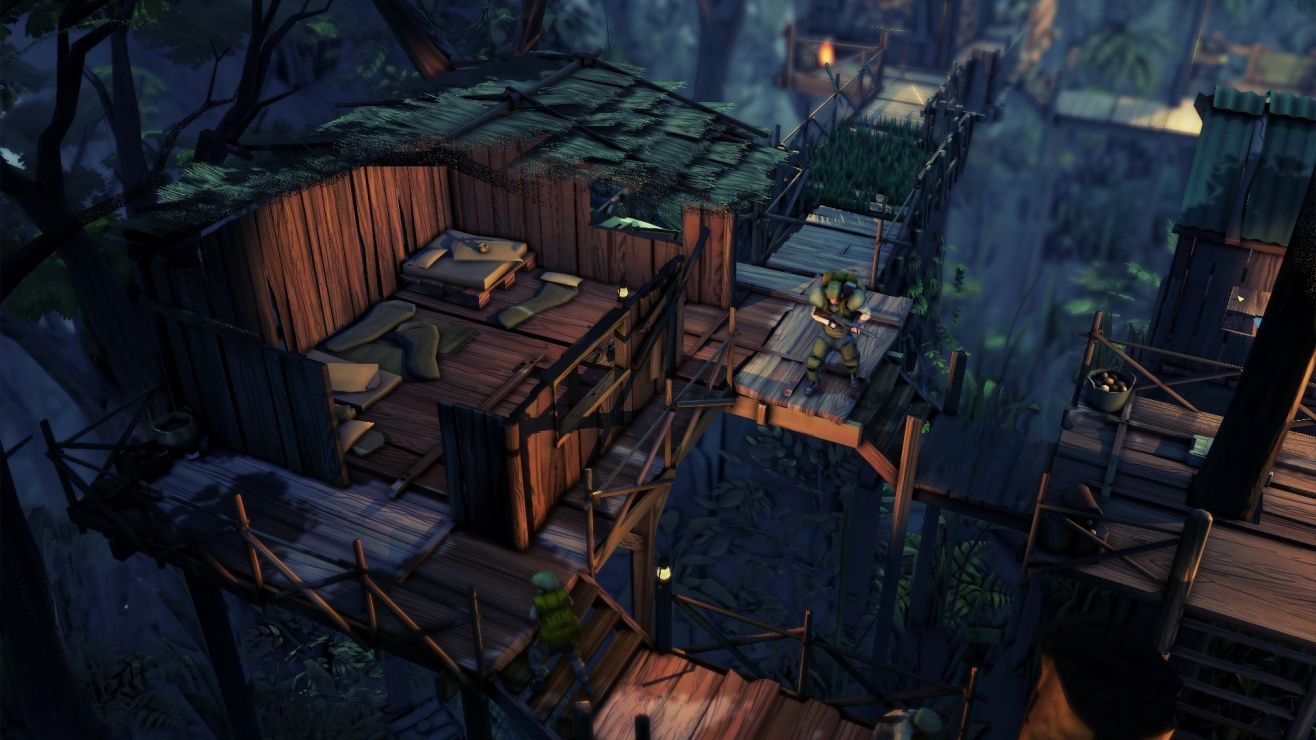 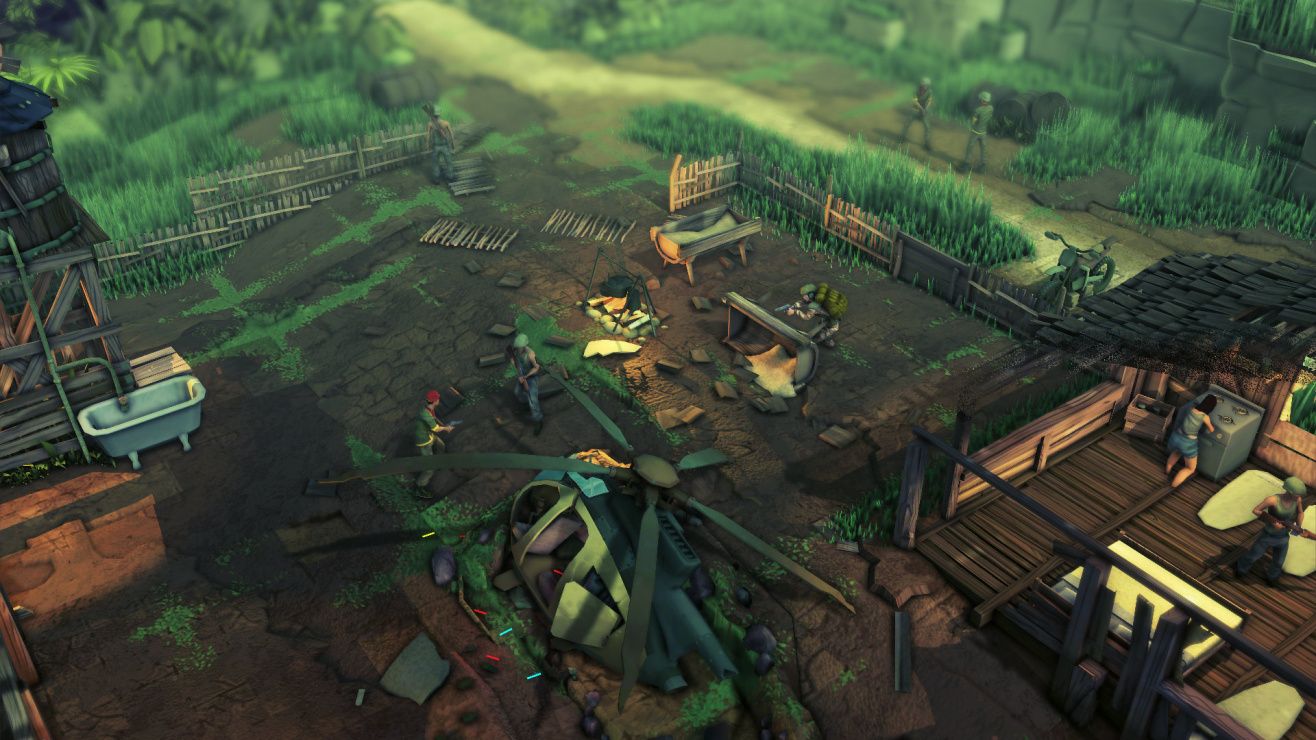 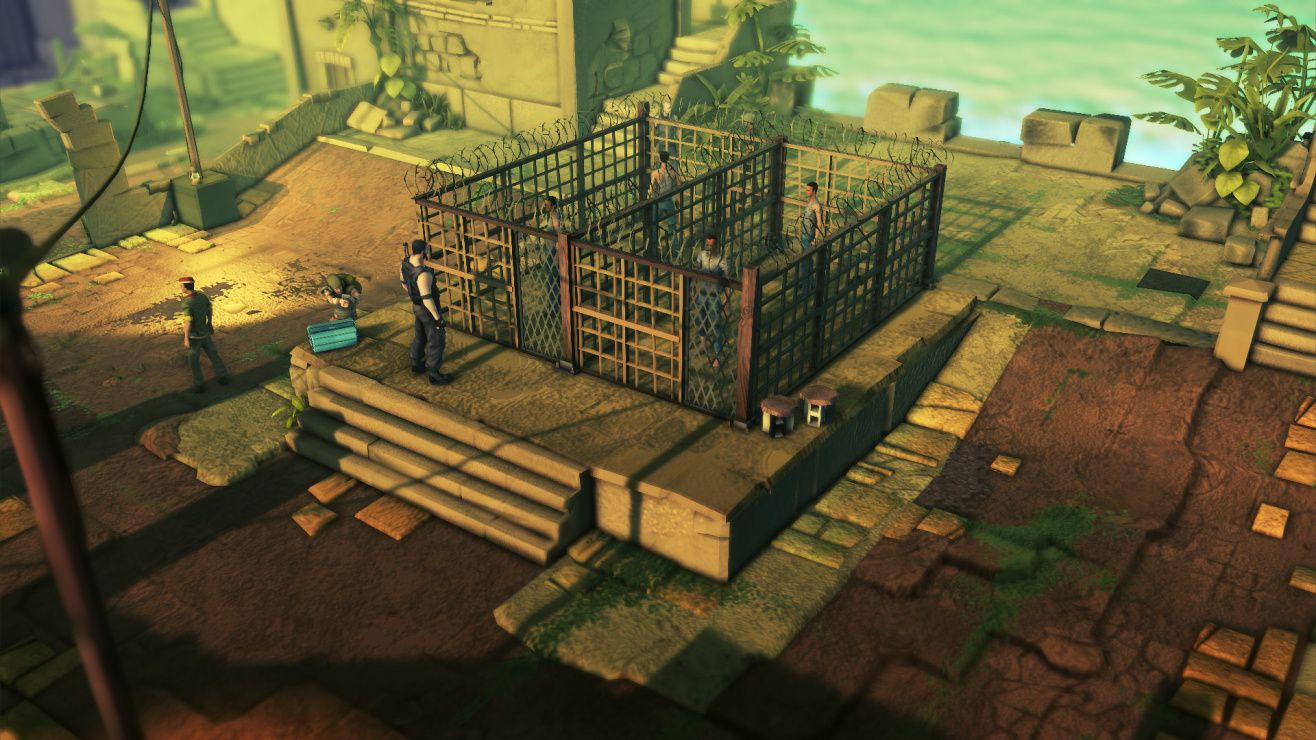 PC Steam Console Playstation Xbox adventure rpg strategy simulation violent turn-based
Jagged Alliance is back – With a new take on turn-based tactics, adventure elements and the well-known quirky mercenaries! Set 20 years after the first Jagged Alliance, this spin-off lets you experience a road trip into a jungle hell to test your mind and body to the limits! This time it’s just you and a few allies versus an entire island ruled by a drug overlord and his crazed army.
Share Share Share
Promote for 50G

Can someone please just make a remastered of JA:II, you know like the EE-Versions of the Baldurs Gate games, or the remastered Command & Conquer?

Jagged Alliance: Rage! is a "inspired by" games. It has a special "rage" ability for each merc, but the rather clumsy inventory management (and post-combat looting), the art style (caricatures), lack of variety for each merc's sayings made it a luke-warm recommendation at best.
Set 20 years after the last JA, many of the mercs you know are retired. But when Fidel called out a mayday from an island promising a big payout even as his chopper was shot down, AIM will send someone in. Choose two mercs from the list, and you may recognize some familiar names. Do you want a close-quarters specialist or a long-range sniper? What role will your teammate bring? Later in the campaign you have the option of bringing a third or even a fourth member into the team. even as you found that Elliot is back, and he will not tolerate any interference of his plans on this island...
JA is now a 2D tactical combat game on a 3D map, with a system reminiscent of XCOM (the new one). You have X action points for shooting, moving, reload, and so on. For each shot, you can choose to aim better by spending more action points, up to +3. And you can choose to aim at head, torso, or leg. You can also engage overwatch, which lets you fire on enemy turn if they come into your view arc.
At night, mercs has reduced visibility range and lowered to-hit chance unless your merc has night-fighting training... or is wearing night-vis.
Each character can wear headgear, backpack, torso armor, leg armor, and if available, specialty tools unique to that merc. Each piece of gear (except headgear) can add inventory slots, and you will find a LOT of different weapons, ammo, armor, and so on. Add improvised weapons, mines and IEDs, grenades, and more... plus first aid kits, bandages, water, surgery kits, and it's hard to decide what to keep and what to dump.
Hostile army has blocked off the water supply and clean water is hard to find. Drinking dirty water can bring about an infection that can lower HP. Same with wounds and shrapnel... Wounded in battle and bleeding means losing HP every turn unless bandaged, but dirty bandage chances infection as well. If you get parched you can start to lose hitpoints and combat effectiveness. So it's about balancing risks.
The map has some hotspots you need to visit. There is also sometimes a pursuit force that you can choose to run from or confront. There is also sometimes a convoy you can intercept. Any way, you go into tactical combat.
You can engage from long range, or get stealthy and stab them in the back. Attack is made against enemy armor, if he's wearing any. If the armor rating is higher than your weapon's armor penetration, there is a chance that the shot will be "stopped by armor". So getting better armor is a top priority.
You get rage by getting hit, making kills, or suffer from pain (which includes shrapnel wounds). And the rage abilities are usually quite powerful, and they can turn the tide of battle. You can also artificially induce rage by consuming the poison "Bliss" but it has side effects...
If your teammate got knocked out from damage, you could revive him/her with an adrenaline injection.
On most maps your objective is to eliminate all hostiles, but there are some missions where you have time limits, like save as many hostages as you can, kill enemies before they get away... or don't let them poison the water.
Once you have eliminated all hostiles (they may be one or two exceptions) you get the ability to "remote loot" which means you can loot any bodies or crates on the map, no matter how far away they are. But the process can be quite tedious. When you are ready, move your team to the "exit square"
Between combat, you can rest at the rest spots and make camp. In the camp, you can use your mercs special ability for the group, if any. You can build weapon or armor attachments if you got the right materials, or you can just sleep a little and get some HP back. Or use a surgery kit to remove the shrapnel, cure infection, recover HP, and so on,
Later in the game you also gain the ability to call in rebel squads to ambush enemies or attack a location with you. If they battle alongside you, you can outfit them with better gear that you find... and they will stay outfitted that way, making them much more survivable in battle.
All in all, the looting is tedious, and the infection mechanism rather unexplained. Some rage abilities are simple to figure out. And the caricature look doesn't quite suit a serious game. I wish there were more dialog variations, and less tedious inventory and looting. This game has the feel of JA, but not quite there.

Jagged Alliance, But Not!
What can I say without being too critical of this game? It's "meh".
While Jagged Alliance: Rage is a fun game, it absolutely does not live up to the legacy of it's predecessors. It's more like the hollow tree trunk of what once was a mighty oak.
I'll start by listing a few of the Cons:
Short & Fairly linear story: Not a lot of chance to just mess around and improve your mercenaries and their equipment like you did in the older games.
Limited Character pool and squad size: You start with 2 chosen units, and end with 3, max 4, depending on the in-game choices you make.
Small scale maps.
The Pros:
A pretty good turn-based Tactics game
Somewhat compelling story.
Some fun to be had in gearing up characters, but very limited overall.
All in all Jagged Alliance: Rage simply suffers from a massive change in style. If it had been a new IP with no history, it would have been a decent, albeit short, game. Unfortunately, if you are expecting the same experience, or in the very least a somewhat similar experience, to the older Jagged Alliance games, you may be very disappointed.
Play it without that expectation, and you will enjoy it a lot more.
It also seems to have tried to tap into the XCOM success, but again in a very... VERY... limited way, in every aspect of the game.
I will recommend this game, although I highly suggest waiting for a sale.

This is a good game. JA2/JABIA was better due to the (JA2 only-character creation) training & arming civilians to defend their homes, being able to return to towns, ordering more mercs & equipment for varied squads, etc. This game is fun but it doesn't make a good follow-up to the previous versions.

If you remove Jagged Alliance from the name, and dont play expecting it to be Jagged Alliance 3, then this is a GREAT game......
it's nothing like jagged alliance though, it's more of a streamlined adventure turnbased RPG-ish.... some new features, like rage meter (which gives u special abilities) and the drink water-immune system-infections system keep it somewhat fresh (you need water to keep hydrate, and rest so ur immune system doesnt drop, you can also catch shrapnel from gunshots and have to remove it) it's just little things, but everything else seems to be on rails, you progress on missions linearly, and there doesnt seem to be stats or levels to improve on the mercs.....
overall, it's fun, but IT IS NOT JAGGED ALLIANCE. dont expect it to be, or u will be dissapointed.

Mission bugs, AI bugs, control bugs, micro-freezing, regular freezing, clunky UI, no key mapping, tedious looting, and the list goes on...
If you're patient enough to put up with all that, though, the gameplay isn't bad. It just feels oversimplified, the maps are small, and the tiny group stash prevents collecting a wide variety of weapons to try different tactics with. I still had fun with all the puzzle-like stealth killing and occasional gunfights.
Because of the bugs and shortcomings this game isn't worth the full price, so wait for a discount of at least 50%.