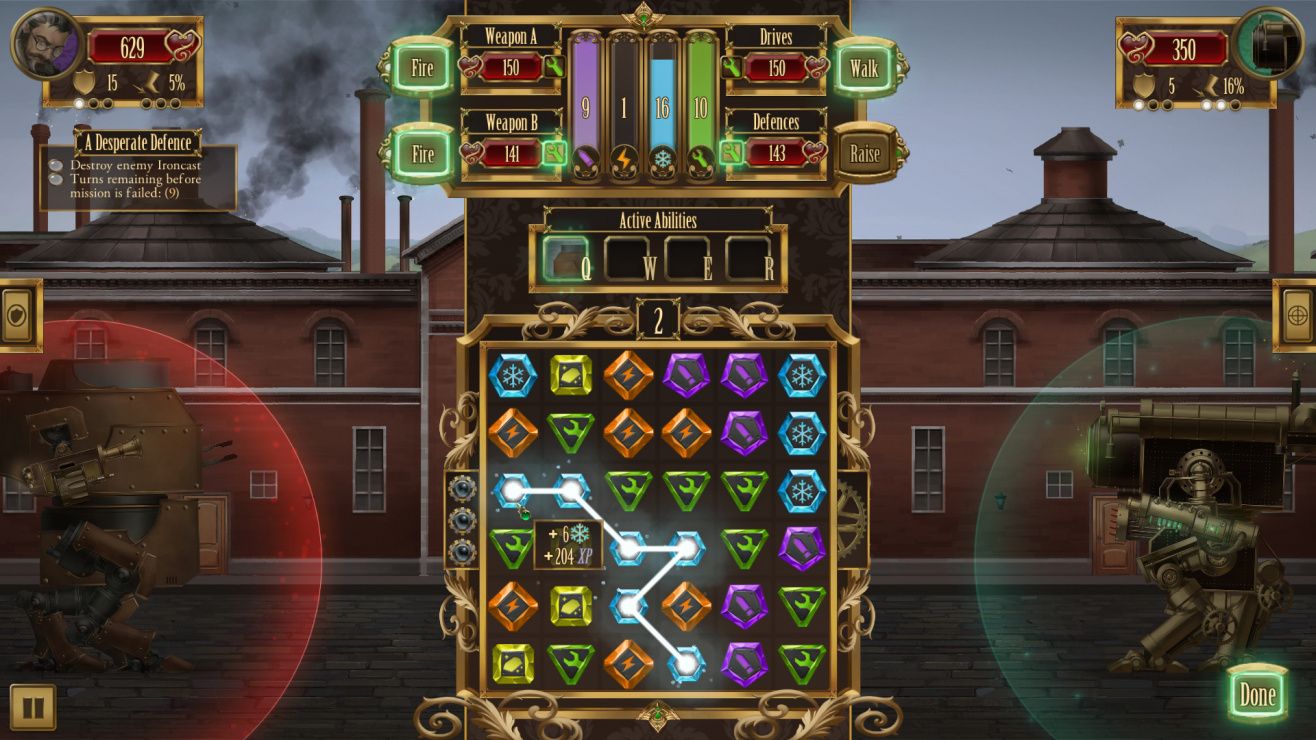 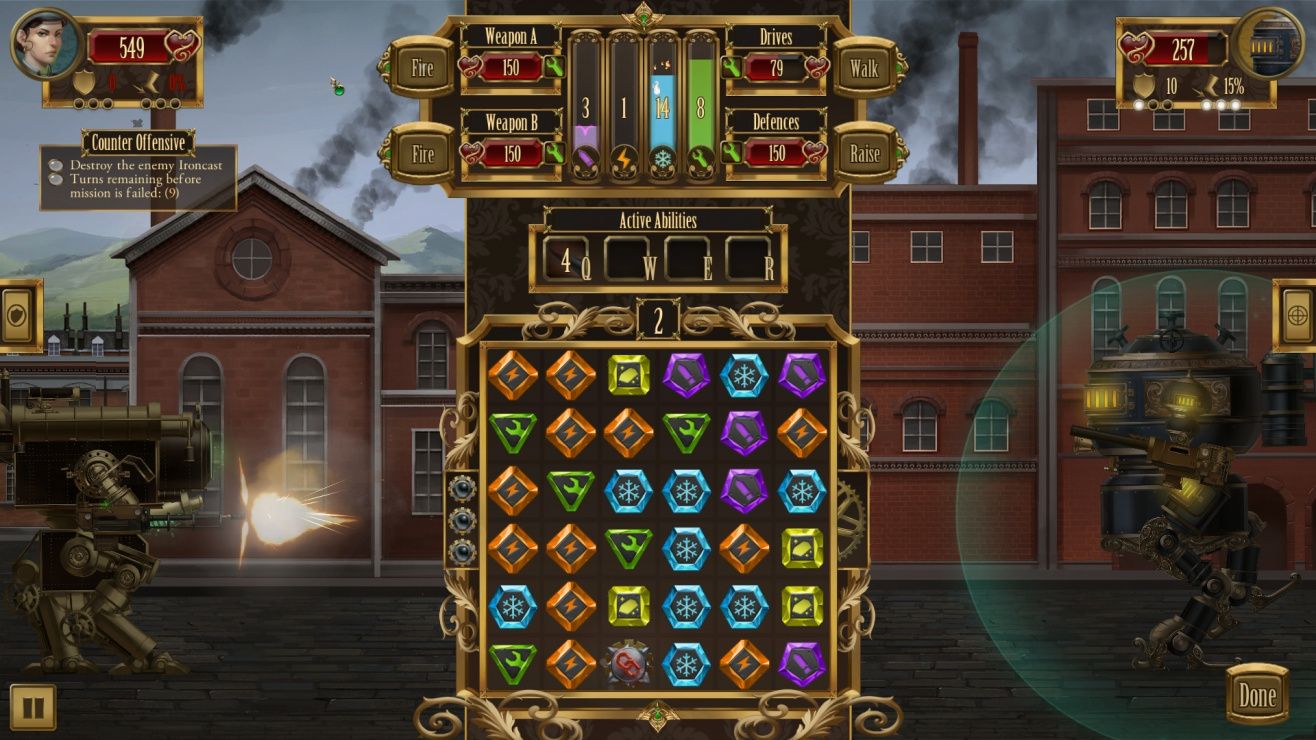 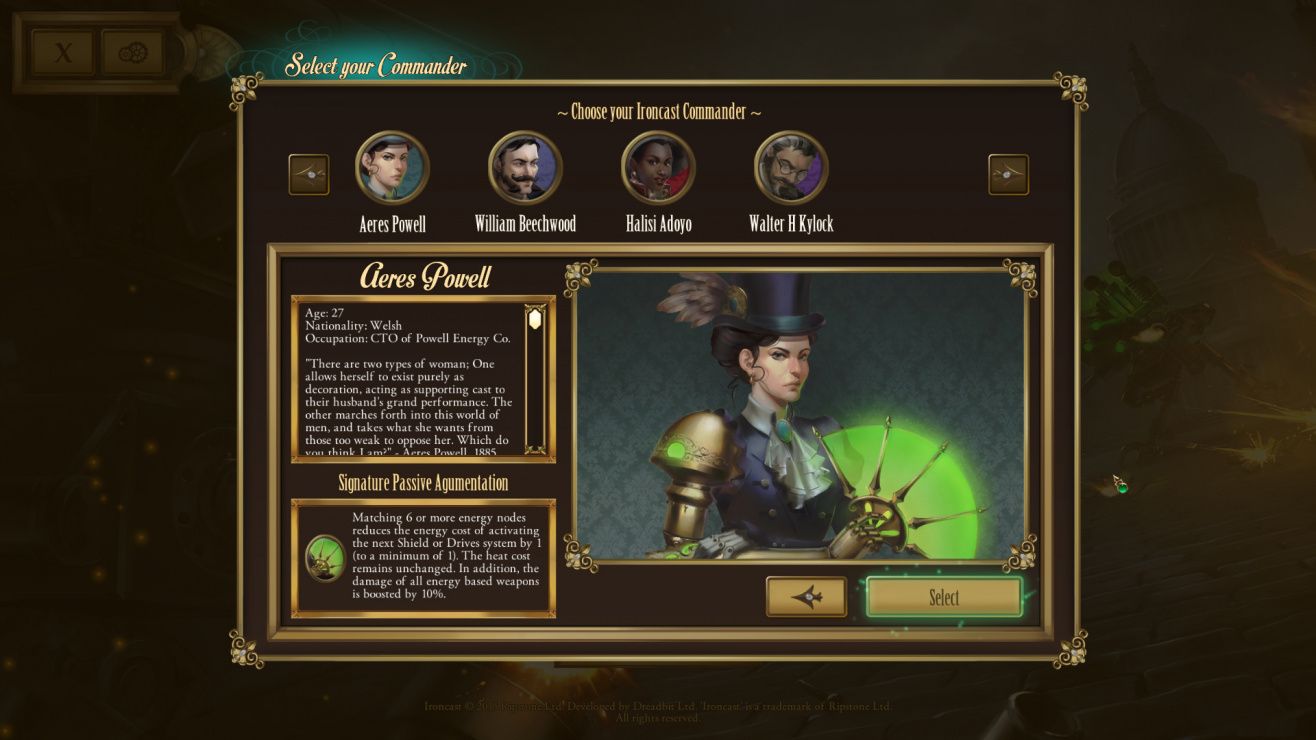 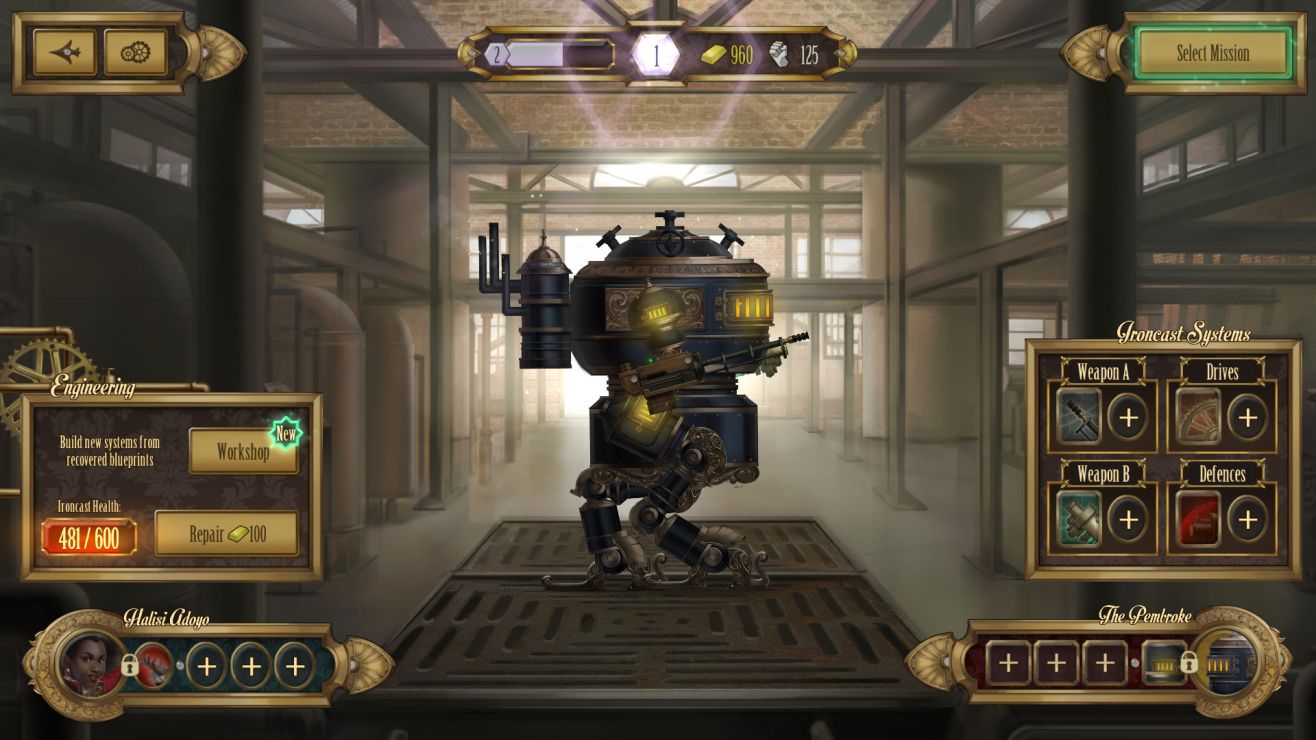 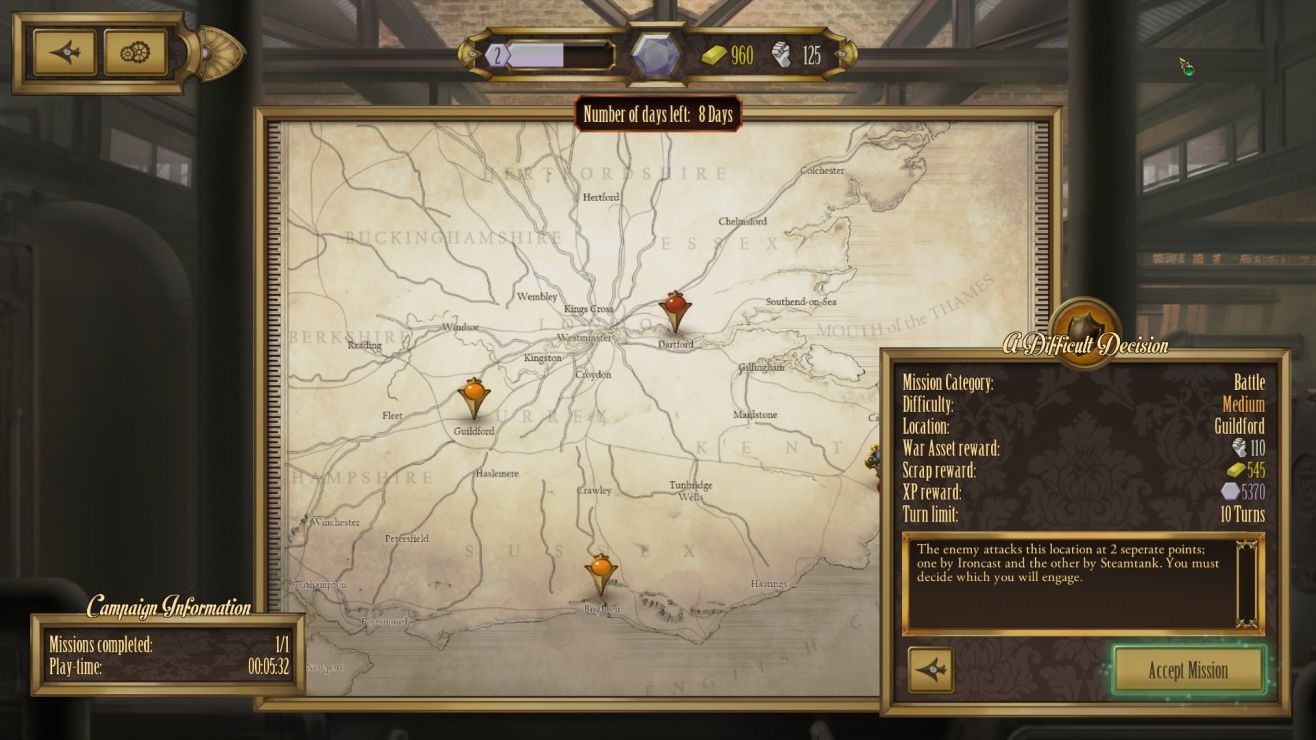 PC Steam Console Playstation Xbox indie Nintendo rpg strategy puzzle casual steampunk
Inspired by Victorian era science fiction writers such as H.G. Wells and Jules Verne, Ironcast is set in an exciting alternative history; a time when refined men and women in top hats and bonnets commanded gigantic walking war machines, laying waste to the enemies of the British Empire! Take control of a 7 meter tall walking vehicle called an Ironcast and face off against an invading force of enemy Ironcast in order to defend 1880's Victorian England. Battles are fought by generating resource nodes which in turn drive the Ironcast's various weapons and systems. You must choose how to spend these nodes wisely, either offensively in order to cripple and destroy your opponents, or defensively, if they suspect a barrage of incoming weapons fire is due.
Share Share Share
Promote for 50G

Ironcast is a game I constantly find myself returning to YEARS after being given a code for it.
Its the perfect game to play when your mind needs a break from endless walls of text or heavy involved action games. You can easily play it casually or spend time creating different strategies and play styles for each commander and ironcast combo.
I would highly recommend picking this hidden gem up and giving it a try yourself.

Ironcast has a splendid campaign and takes its Steampunk genre as seriously as is productive. It is also among the rare titles that afford a good german translation - a preciously rare feat!
Both the puzzle layer and the battle theme go well with one another, blending into a rather special game. That combination is probably how the game manages to be both casual and challenging at once, which is commendable indeed!
Although it pains me to say it there's also a few flaws to mention. Specifically the campaign is very short. It being so enjoyable makes time fly even more! Casual puzzle games should be most suited for being played on occasion - indefinitely. Insofar it really is regrettable that the whole unlocking dynamics befitting the genre end up rendering the game inevitably easier. It may have been great to unlock challenges to spark long lasting interest; unlocking additional power is not exactly my deepest desire after having played through the game already. The tragedy of too short a grand endeavor ensues.
To finish my review on the good note:
I've thoroughly enjoyed the brief time I've spent with it - it is well worth the modest asking price!

It's a neat little steampunk-themed matching game that I find to be a good stress reliever. It's pretty laid back when it comes to game play, which also makes it easy for me to lose track of time while playing it. The Ironcasts, your steampunk mechs, have some interesting designs, and the backstories of the commanders you can unlock are quite nice. You can choose missions similar to FTL, and it has a global progression between campaigns like your typical Rogue-lites. As for the combat, you have 3 turns to match the different symbols that you store and use to power your Ironcast, meaning you will have to decide at times whether you want to try for a Hail Mary with some ammo, or play it safe and power up your shields and dodge percentage.
The downsides, however, lie in the same simplicity that makes it appealing as a chill game. The in-game dialogue doesn't change for the different commanders, so all you really get are their mechanical benefits. If you're looking for in-depth mech combat like Battletech, this is not that game. It does get challenging when you have to decide between two key systems of your mech, but that's about it. There is a noticeable difficulty spike at the mid-point and later, so be prepared to run through the same choices of early mission quite a bit.
Overall, it's an enjoyable, easy-to-lose-yourself-in type of game and I do recommend it if you want something that isn't intense with its game play and just relax.

Marked received for free by an awesome steam friend.
small Yes and a big NO
(Mostly No, but this game probably dosen't deserve another thumbs down. Probably.)
Yes.
1)Heavily RNG so you're always having to stay on your toes.
2) A variety of things to play with, weapons, robots, pilots.
3) A nice campaign story that gives you three different missions per stage. Haven't gotten near end stage yet. I think i'm always dying at ~70% of the way
4) It's a connect 3 or more gems kinda game, so somewhat relaxing. somewhat.
5) Those gems have a nice balance about how you play. Repair, Attack, Energy, Coolant.
NO
1) HEAVILY. HEAVILY. RNG so, who knows what enemies you will face, what gems you will be able to connect, what missions you get, if that 5% enemy dodge chance magically evades your attacks. That kind of frustration.
2) This game gives you new equipment to use in the form of blueprints. That you must balance your $ to pay for and\or repair yourself so you don't die in the next stage. You cannot sell or remove these excessive amounts of blueprints\ old equipment you end up acquiring which makes inventory management in the later ends of the game annoying. Also, you can't visually tell if you've equipped a new gear. All the icons on the user interface stay the exact same. So you can equip a shiny green rare equipment, or it could still be a default normal white\gray\grey equipment. The only notice is a big EQUIPPED next to the item... in the big list of items.
3) Also i did a mission for the first time, at the end you are told 'they'll repair you for free!' No, no they most certainly did not repair for free. Unless they repaired an insignificant amount of armor health that i didn't notice.
4) Speaking of insignificant amounts of health, the only progression this game throws at you, is the more you play, the more you unlock. Usually something nice right? Most of the time its neat new items and equipment to maybe RNG upon and use (if you can even AFFORD it at that point)
But the real kicker? Hurr durr, you now get +3 Max health per level next time you play! Yay!!! - Sarcastic yay (Just looked at a player made guide, a long, long, long way down the road. You can eventually get.. like +18 health per level... still not that significant usually)
5) Those darn gems. Sometimes you just really really need gems to attack, repair, defend, coolant. But RNG has killed me a few times this way. By not giving me what i need when i need it. Did i mention how heavily RNG this game is?

This is a pretty strong 'yes but'.
Ironcast is a match-3 mech rpg. You chain together orbs in your puzzle space to fill gauges with your currencies (coolant, energy, ammo, and repair juice) and then you spend those currencies to power your shields, and guns, and sprinty footsies.
Unlike Puzzle Quest, where you can do just about anything with any type of orb, Ironcast really boxes you in. Ammo is for shooting. Don't have it, can't deal damage. And because a lot of missions in Ironcast are dps-races, not getting ammo drops (or, conversely, making too-big ammo chains and not leaving some on screen) can give the rng leverage to screw you.
And there's a lot of rng in Ironcast, compared to something like Puzzle Quest. Your shields soak damage, which is nice, but your feet give bullets a miss chance against you. Keeping either powered takes energy, but the energy economy is never something your opponent runs into trouble with. So by the end of game, you're facing mechs with a 50% dodge rate, and the only accuracy buff in the game is +5% if you luck out and get it to drop from your level up menu.
This is a problem in its own right, but so are weapons. Weapons, shields, and new feet are dropped from opponents as blueprints, which you can construct with scrap. Getting scrap isn't too hard, but getting useful blueprints to drop *is*, and the difference between a decent weapon and a weapon two levels behind is monumental. Late game shields thoroughly block early game weapons, and the weapons that are designed to chip through shields are usually one-shot-per-activation wonders, which means 50% of the time the enemy mech dodges them if their feet are working.
And by the way, when I say late game, that's a bit of an exaggeration. Ironcast is two acts long, for a total of 20ish short missions including the game's two bosses.
The only reason it isn't played in a single run is because your exp unlocks permanent progression, such as more xp per match or more HP per level, and you need to unlock a bunch of this to have a reasonable chance of defeating the bosses (unless, again, you luck out with blueprint drops.)
XP is its own problem, because you get a lot of it from matching orbs, which means if you win a battle early, you've just sacrificed a lot of potential XP. Proper play is to stall out a battle until the last turn, then hope your weapons don't whiff or that the battle has a second wave it didn't tell you about.
This isn't terribly fun, and that same descriptor applies to a lot of the roguelike elements in Ironcast. Level-ups aren't super interesting, as few selectable bonuses are good (10% chance to deal +10% damage? Really?) Armament selection also isn't much of a choice. You use whatever can punch through shields, and then whatever can spam shots as your secondary.
The actual match-3 play is fun, and the setting isn't *terrible* (although it's pretty spare on lore,) so I'd say this is a pretty good choice for a bit of casual distraction, but if you're looking for a match-3 rpg with a bit of mechanical depth, try Puzzle Quest. If you're looking for a mech rpg, try Bionic Dues.
Edit: In the interest of not being a negative nancy, here's what I think would make the game more fun and less random. Shields reducing only energy weapon damage, feet reducing only projectile weapon damage, a pop-up before you confirm a mission that shows the loadout of the mechs you're going to fight, abilities costing resources rather than being on a cooldown, and a button on a three-turn cooldown that lets you dump and reshuffle all the orbs in the match space. This would allow the game's 'opener' abilities to actually have some value, giving the player a way to get past enemy defenses rather than just chipping with your highest damage weapon and hoping the rng lets it hit, and it would make gameplay more centered around the resource economy---a thing the player can reasonably have control over---rather than what the computer decides to do.

It is a solid match 3 game. It is fairly simple, but there is some nice art and RPG elements that elevate it from something like Bejeweled. I enjoyed my time playing it.
However, there is not a ton of depth and it feels like progression is very very slow - like you get to have 10 more health permanently for future runs. These don't feel significant enough to have an impact and make the game feel grindy.