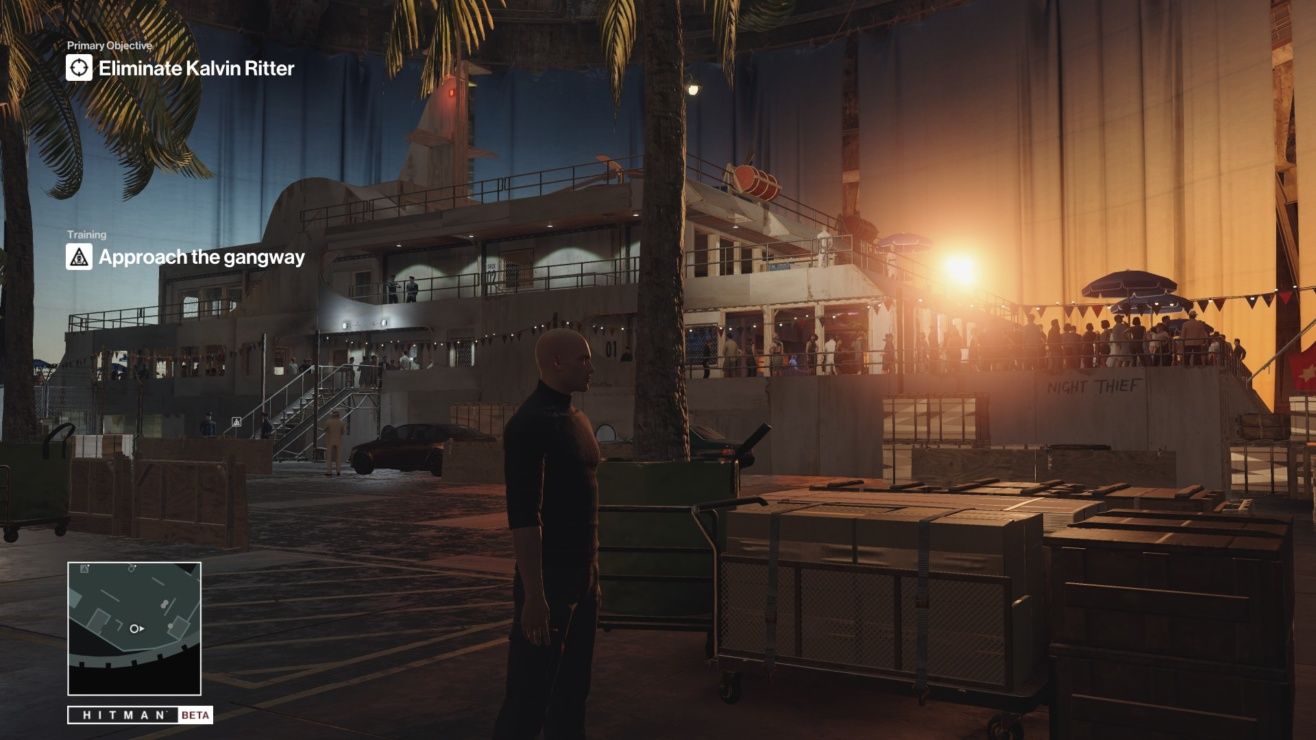 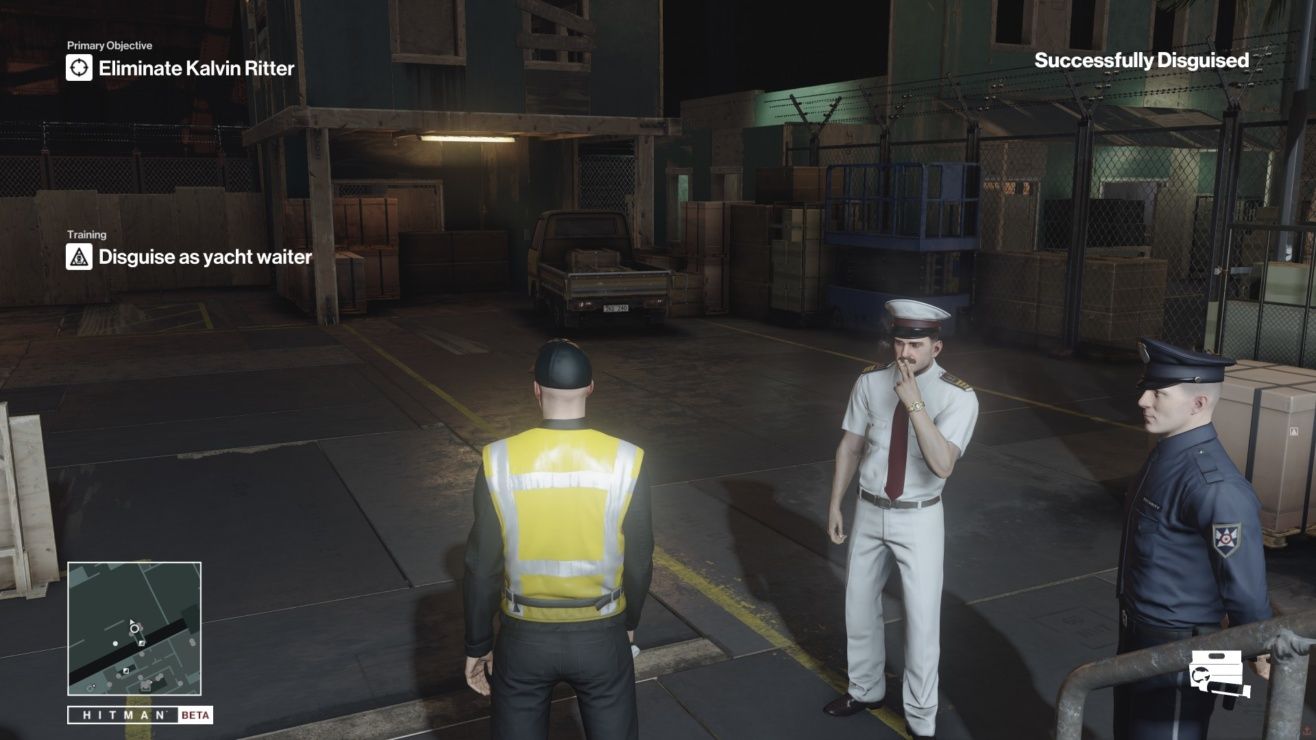 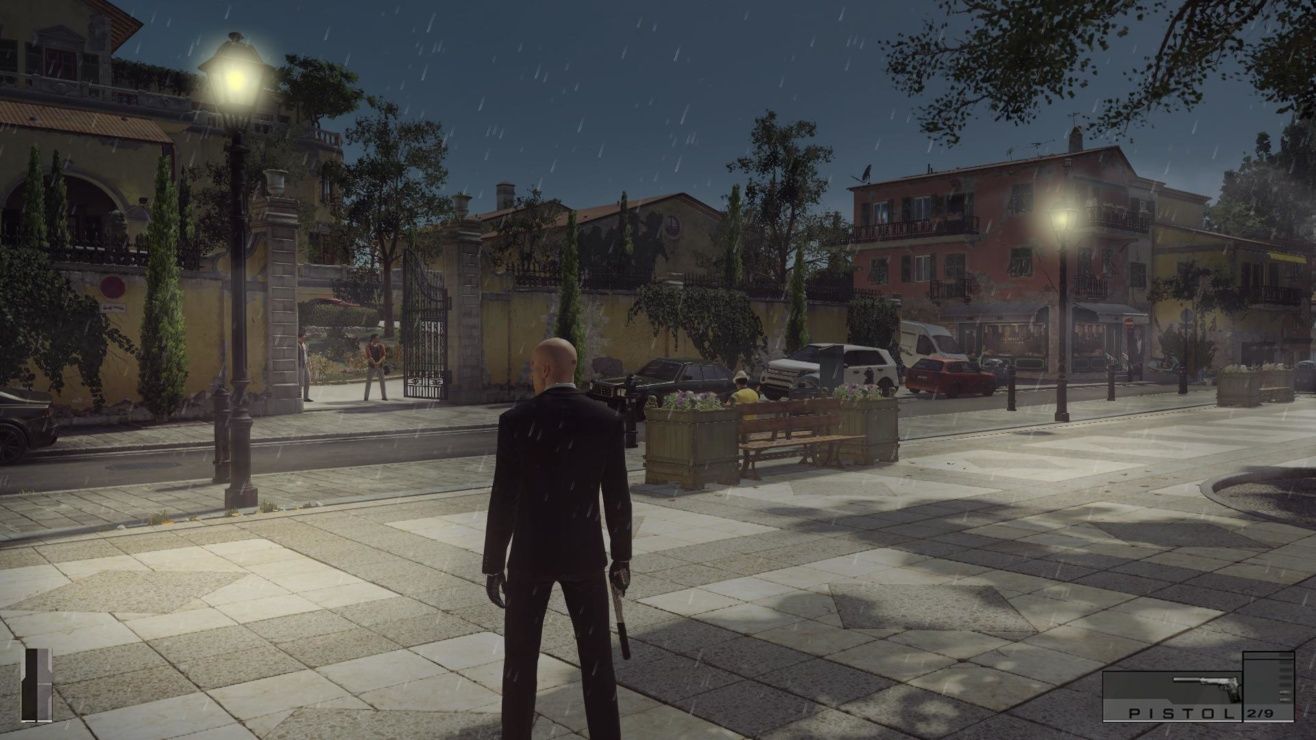 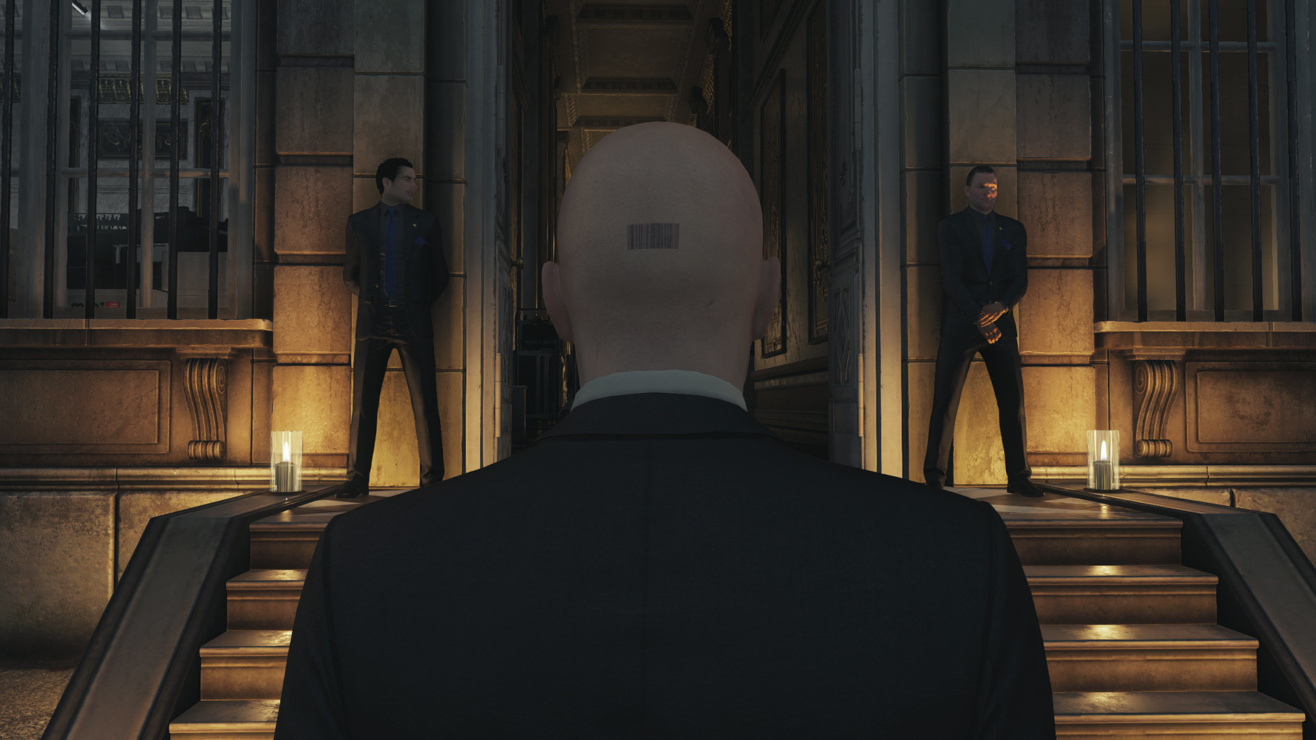 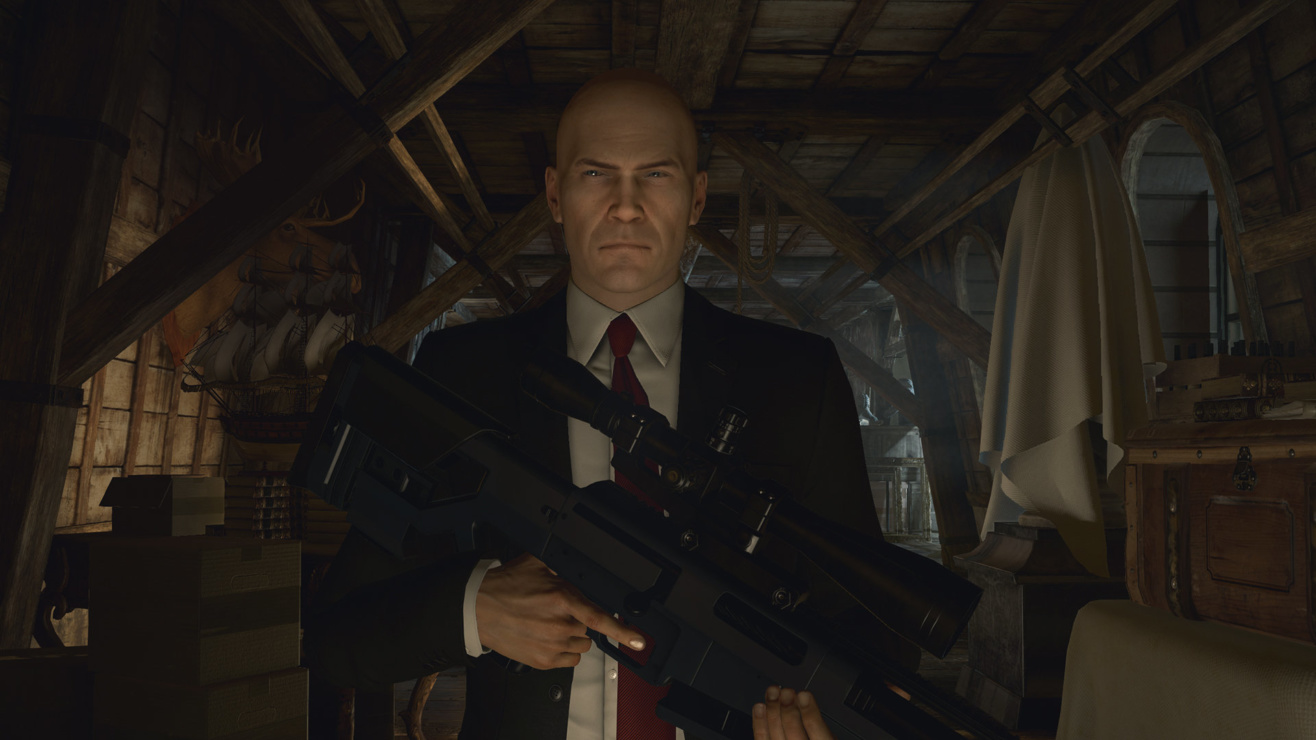 PC Steam Console Playstation action Xbox singleplayer shooter role-playing stealth sniper killer
In 1999, a man who goes by the alias 47 is initiated into the International Contract Agency, demonstrating exceptional aptitude as an assassin. However, the ICA is unable to verify his background or uncover any information about him. Uncomfortable with having no leverage over 47, the ICA training director, Erich Soders, arranges for 47 to fail his final test despite passing all of the other tests flawlessly. 47's handler and fellow trainee, Diana Burnwood, discovers this plot and helps 47 to pass the test against Soders' order of having him do it alone. Soders reluctantly approves agent status for 47 and assigns Diana as his handler. The events of 47's subsequent career are then shown as a montage of assassinations from the previous games in the series. In 2019, the shadow client performs an assassination for Viktor Novikov, one of the heads of the international spy ring IAGO, and receives a copy of all of IAGO's gathered intelligence as payment. The shadow client proceeds to use the IAGO files to identify Providence's secret operations. To cover his tracks, the shadow client anonymously discloses to MI6 an impending IAGO auction of an MI6 NOC list, to take place at a fashion show by Novikov's designer label Sanguine. In Episode 1, "The Showstopper", MI6 hires 47 to prevent the sale by assassinating both IAGO ringleaders, Novikov and Dalia Margolis, at the fashion show in Paris, France.
Share Share Share
Promote for 50G

🔹Positive Aspects:
Map design & Interactions with it.
Magnificent visuals.
Probably the best sandbox game in its genre.
The best stealth mechanics in current-gen stealth games.
🔸Negative Aspects:
Always online DRM.
Terribly timed events that aren’t even playable once the event is over.
▶️Introduction
HITMAN (2016) is the hitman reboot that tries to capture the same magic as Blood Money did back in 2006 and simply drift away from the story over gameplay style of Hitman Absolution. This game had a very weird type of release identical to Telltale games, you basically get a new episode every 2 months. The game was developed and published by IO Interactive A/S.
Release Date: 11th March 2016.
Last known update: 19th October 2018.
🎩Small-talk:
Is this game truly close to the Masterpiece that Blood Money was?
Smalltalk
Many people didn’t appreciate Hitman Absolution which is understandable, the essence of the game was left as an afterthought while focusing on the story. The hitman series was always a gameplay first game and with the reboot, they actually achieve this. Not only they succeed to create a game with the traditional stealth essence but in my opinion HITMAN (2016) is currently the best game in the series.
🎮Gameplay:
The game truly has some extreme depth as far as options to succeed in a mission go.
I was always blown away by Blood Money playing it back in the day on an old FX Nvidia GPU lol. Nonetheless, this game actually feels even better for its timeline.
Stealth mechanics:
The stealth in this game isn’t the traditional idea of “do not let them spot you”, you’re basically just walking around. The only catch is that the security or enemies can actually spot you, the best solution is to actually take someone out and simply use their clothing to suppress your identity. Now you may ask “what do you mean by suppressing”? Well, unlike Hitman Absolution where you can simply press a button to make yourself undetectable by enemies, you now have to hide within groups of people in order to blend it and become undetectable. Basically, your goal is to blend in.
Eliminating should be done in a quiet matter as well: The game is pretty unforgiving if you’re getting detected you can either fight against the horde of highly trained special agents and security or you can use the great stealth mechanics of this game and live to fight another day. Yeah if you so happen to be a potato you can simply hide in lockers or trash-bins, enemies will not automatically know your location, they will first just enter the room and do a typical search for the next couple of minutes. Another good stealth mechanic is that you can actually hide bodies which gives you total control of eliminations. The game is basically amazing as far as stealth goes.
Map design & Interactions:
Hitman has arguable some of the best-designed maps in the Hitman series. The maps are big and have quite a lot of stuff to offer, you can easily hear conversations that will actually throw hints for your actual goal, perhaps a hidden alley in order to get to your target undetected? or maybe the location of his next interview? The maps and people in the game can give you so much its borderline impressive. Another option to finish your target is to just stalk them and observe their routine, targets actually have some sort of movement pattern. There is a chance that you observed your target going to have a drink, in that situation you proceed to grab some poison from the kitchen and pour it into the drink he previously drank from. In other situations, you can simply “break” their pattern. You can actually pour Rat poison in his drink, the result isn’t deadly, the target will get sick and run to the next toilet and in that toilet, Agent-47 will simply finish the job. Alarms are a good distraction as well.
Other aspects:
In my opinion the Tutorial in HITMAN 2016 is one of the best and most memorable tutorials I have ever experienced.
The random events are a nice addition, but they disappear after some days which can be annoying.
At the start of every mission you can enable the option to have some hidden weapons or items within the map, reminds me of the PAYDAY 2 mission setup.
🎭Story:
Be aware, spoilers ahead!

As mentioned this game is more of a gameplay > storyline game, you get a simple cutscene after each episode.
Basically, you start off in the prologue which happens many years before your career began. After all of the jobs and discussions with the ICA, you get Diana as your colleague. You obviously start off doing your usual job eliminating high-value targets like militia, politicians, or scientists. After some time a cutscene with a mysterious bearded man with grey hair that seems to operate in an identical manner collection information as far as the ICA goes.
The story continues in HITMAN 2. This is basically my only complaint as the cutscenes are very few and very mysterious as far as pieces of information go.
🌇Graphics / Audio:
In my opinion HITMAN 2016 is probably the best-looking hitman game in the series, yes even better than HITMAN 2, the lighting just looks a lot better and less muddy.
Graphics:
Even 4 or 5 years later, Hitman 2016 looks amazing.
Audio / Soundtrack:
Voice acting as well as surround sounds are just amazing and accurate, you can easily comprehend various discussions between random NPCs which is extremely important for a game like this one. There isn’t much of a soundtrack but the musical tracks the game offers are very well made.
⚙️Performance:
In Game:
AMD Ryzen 5 3600X (4,5 Ghz ), 32GB Ram, Nvidia RTX 2070 Super:
The game was played with Maxed out settings 1080p with over 100fps.
AMD Ryzen 5 3500U, 16GB Ram,Radeon Vega 8:
The game was played with the Lowest settings 720p with 25~30fps.
Benchmark:
Benchmarks were captured using MSI Afterburner and the built-in HITMAN Benchmark:
AMD Ryzen 5 3600X (4,5 Ghz ), 32GB Ram, Nvidia RTX 2070 Super: (DX12)

Average framerate : 42.2 FPS
Minimum framerate : 5.1 FPS
Maximum framerate : 73.7 FPS
1% low framerate : 15.0 FPS
0.1% low framerate : 3.5 FPS
Bugs / Glitches / Crashes:
In 12 hours of eliminating high-value targets as a genetically gifted hitman, I experienced no bugs or game-breaking crashes at all.
⚖️Conclusion:
HITMAN 2016 is still one of the very best stealth games someone can get for this generation of games. The depth in stealth mechanics and polish is out of this world, the map design deserves a big shutout as well. Lastly, the visuals are still impressive combined with the optimization. If you can look past the constant Online stuff you can be sure to have a great time with this great game.
📉Overall rating: Autosave (90-100%)
Date of the Review:29.10.2020
Visit SaveOrQuit.com for detailed game reviews, posted daily!

You dress up, you stalk, you kidnap, you murder.
This game will make all your wildest fantasies come true.

Trying to find out how to buy this game was more of a challenge than the game itself. Other than that, check it out for sure.

Honestly the best Hitman game in the franchise with Hitman 2 being added content, I dislike the episodic style but once all the episodes are out and you can buy all of them in a bundle it's fine.