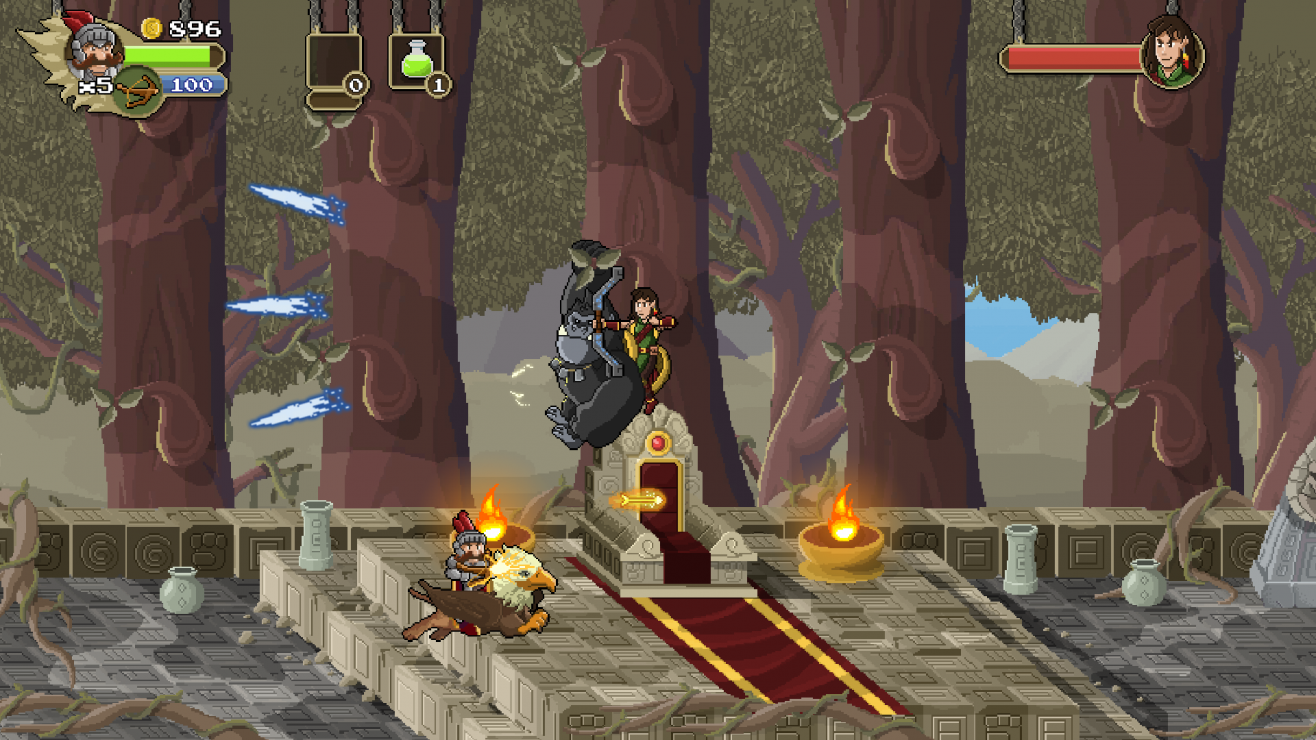 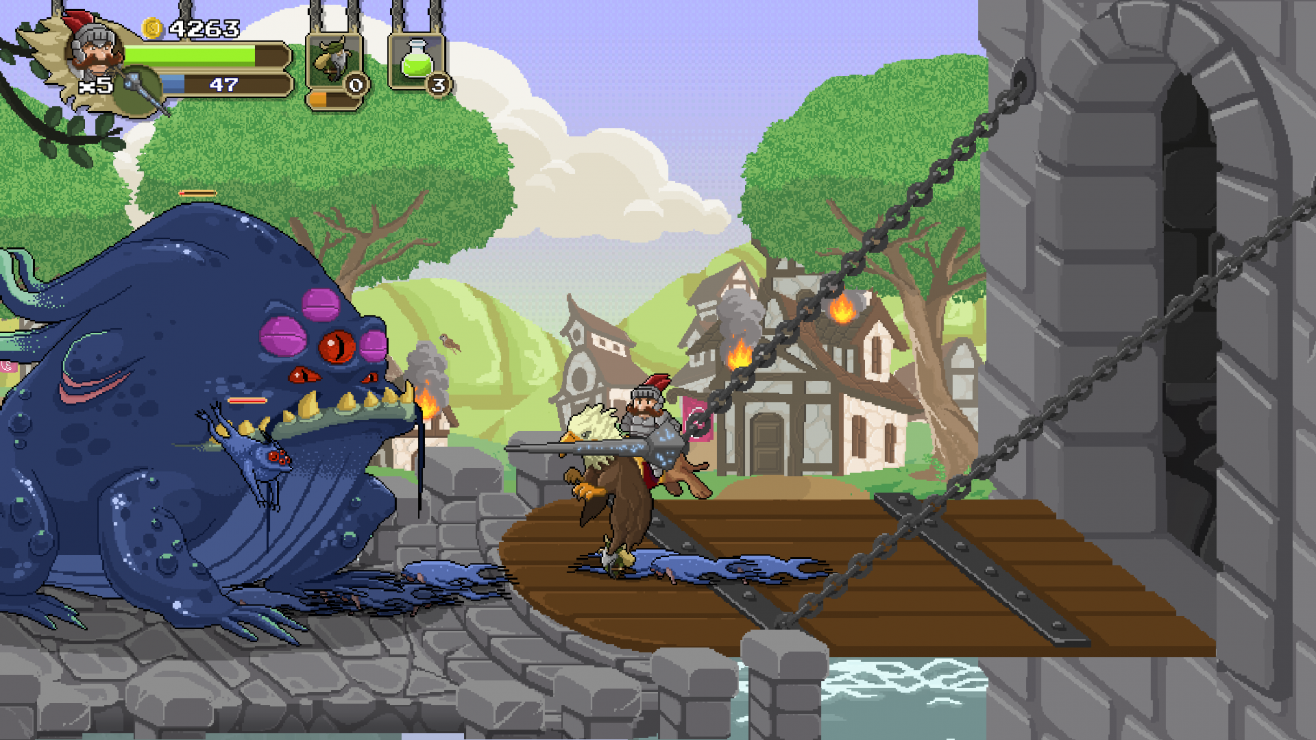 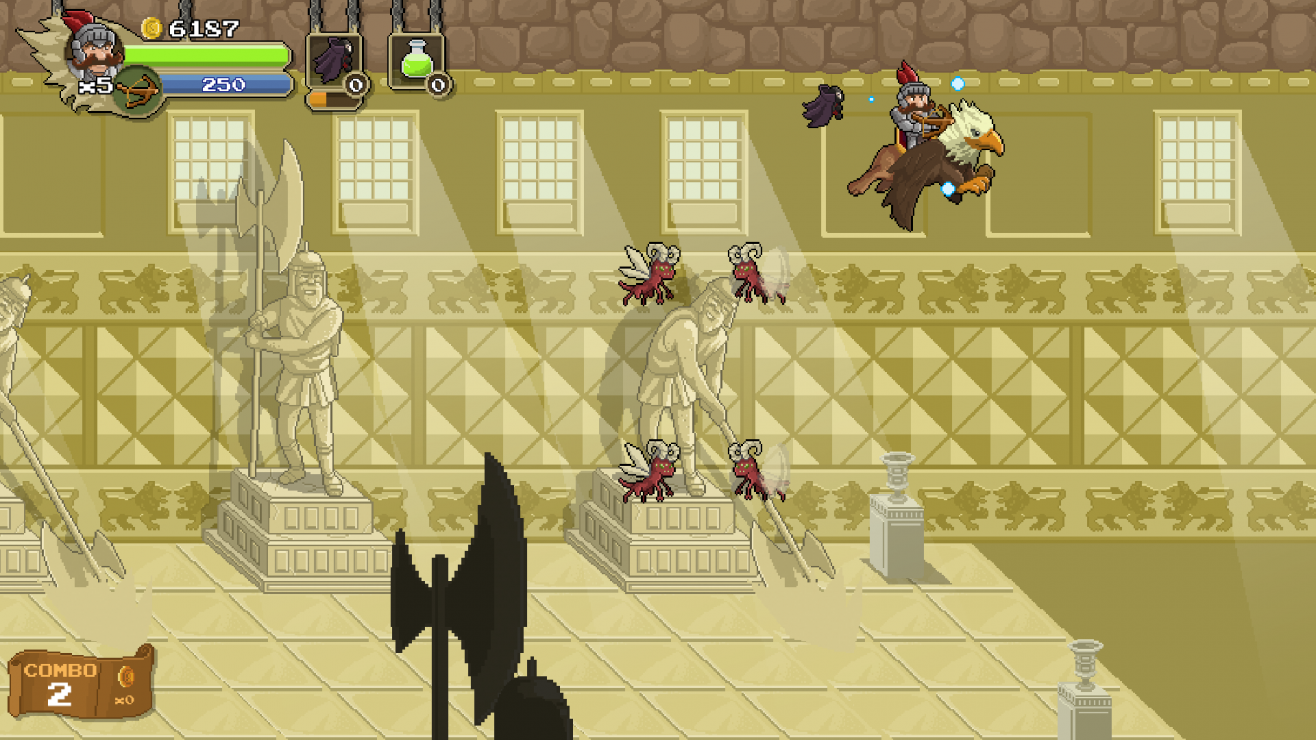 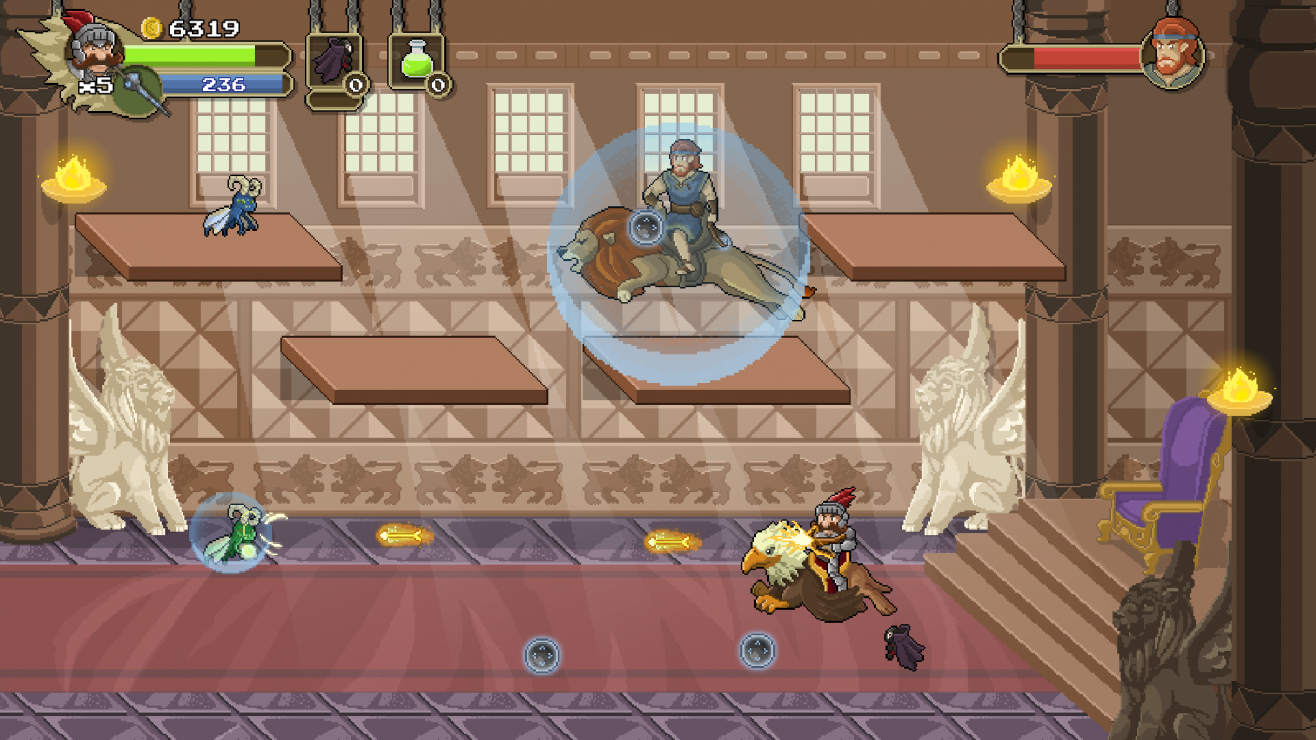 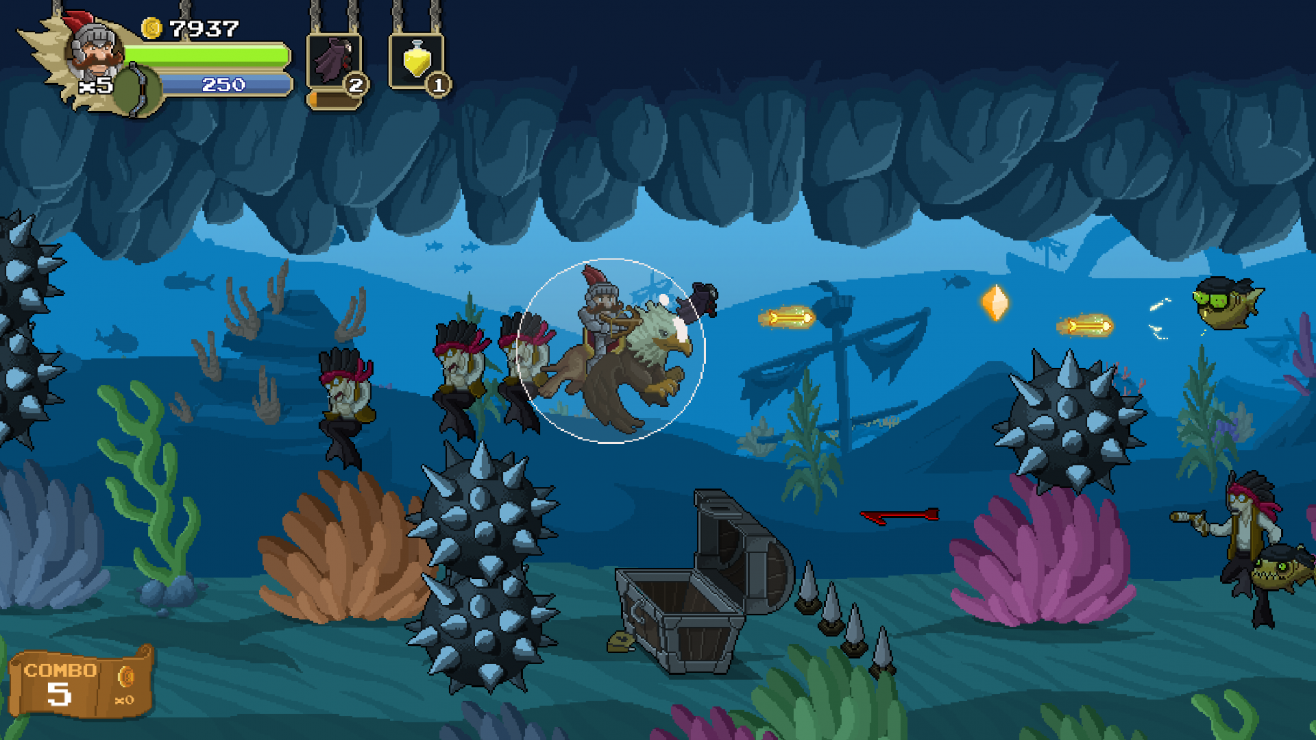 PC Steam Console Playstation action Xbox indie fantasy arcade 2d pixel sword medieval knight
Gryphon Knight Epic is a 2D Medieval Shoot’em up that mixes elements from classical shoot’em ups, exploration and duel-like boss battles, it tells the story of Sir Oliver and Aquila, an accomplished knight and his loyal gryphon that are forced back to adventure once again. Sir Oliver have already defeated a dragon, married a princess and saved the kingdom. But during his quest he will face adversaries he never imagined he would, because… in reality all of them were once friends. What happened? These heroes would never go rogue… and all at once? Something is rotten in the kingdom and its up to Oliver discover what.
Share Share Share
Promote for 50G

Typically, when we think of 2D shooters, it's either the old-school games like Life Force, modern-era bullet-hells such as Dodonpachi SaiDaiOuJou, or Ikaruga (because everyone knows Ikaruga). If nothing else, this is a genre open to interpretation. Not every shmup needs to have hundreds of millions of bullets on-screen, nor do they require deep and somewhat obtuse scoring systems. Sometimes it's a good idea to take the basic concept and move it in a different direction. When this classic genre is thoroughly explored, it can result in games like Gryphon Knight Epic. GKE is far from the complexity and challenge of a designed-for-arcades masterpiece, but it is a thoroughly entertaining shooter all the same.
Gryphon Knight Epic is best described as a throwback game. It wouldn't look too out of place if it was released in the late 80s/early 90s. The graphics are appropriate for the time, with a lot of attention paid to background details, which gives every location a high degree of personality. Furthermore, each area of the game includes adversaries that fit the theme. Altogether this makes for visuals that are fun and interesting, but never distracting. After all, you're supposed to be saving the world. It wouldn't look good to take repeated throwing knives in the face, just because you thought a lizard running through the hot sun was your enemy.
As Sir Oliver, your task is to rescue your six comrades from an evil curse. These fallen* heroes have carved away a portion of the world for themselves, and raised an army to deal with anyone who opposes their rule. If you're successful in breaking through their forces and defeating them in a duel, they will surrender their weapon. The parallels to the Megaman series are pretty obvious. In fact, your main weapon is called a "crossbuster" and can be charged up to fire more powerful shots.
Coupling elements of an action-platformer with a 2D shooter doesn't always work. To counter this issue, GKE employs some different ideas. Each of the twelve stages can scroll horizontally, vertically, and even diagonally. There are also alternate routes, a handful of secret areas, and some truly powerful artifacts hidden away. Also, if you think you've missed something, you can turn around to scout a previous section. These slight elements of exploration are well-balanced. They lend the game a bit of an identity, and don't take too much away from the core action. In-between stages you can visit shops to upgrade your weapons, buy potions, and acquire familiars. You're free to take advantage of these luxuries, but they aren't really necessary. If you wanted to, you could complete the entire game with the crossbuster alone. In order to accomplish this feat, you'll have to approach situations with extra care, taking full advantage of your maneuverability.
While there's only so much that can be said about "shoot enemies while dodging stuff", GKE goes the extra mile with its fully realized enemy-design. This probably says more about the games I play than anything, but I've grown accustomed to everything firing an array of colorful non-descript bullets. It doesn't matter if I'm dealing with futuristic battleships, soldiers in ancient Japan, or venomous plants. If they're dangerous, that's because they're spewing pink bullets everywhere. This game is almost novel in its approach. The only bullets you'll be seeing is when they're fired from a pirate's gun. Many of the projectiles in this game are thrown, and fit the location's theme. While it could be considered a minor detail, this level of attention is worth noting. It's also nice that scale is appropriately handled. The action feels really personable when you and your foes are only a few meters away from each other. This slight element of close-quarters chaos gives the game a nice feeling of intensity, without surrounding the player in pink bullets.
Depending on how you approach GKE, it can either be an easy yet enjoyable romp, or tough enough to push your gaming skills. There are multiple difficulty settings, and you can make things easier or harder depending on how many upgrades you pursue. Overall the level of challenge could be considered low, but you can always push yourself to completing stages on the highest difficulty, without taking damage, using only the crossbuster. If that isn't enough, I suppose you could always use a less versatile weapon. As with any good throwback game, there's enough freedom to create your own challenges.
All in all, Gryphon Knight Epic is a worthwhile addition to any gamer's library. It reminds me of those days where I'd visit rental stores, hoping to find some unknown classic, or grabbing whatever had the coolest box-art. Unfortunately, this meant that I played a lot of crap, but I did stumble upon some really good titles. Not every game is going to be as well-known and memorable as Ninja Gaiden, but that doesn't make stuff like Vice: Project Doom any less entertaining. Personally, that's how I'd describe GKE. Even if you played through it, and eventually forgot it ever existed, you won't regret having given it a shot.
*By "fallen" I mean that they've fallen from grace. They're not dead or undead or anything.
If you liked this review or want to see more recommended games, be sure to follow our curator group: Follow Original Curator Group

Overall, a nice side-scrolling shooter. The controls and movement are a little awkward and take some time to get used to. There are three difficulty levels which offer a nice increase in challenge and reward. The game is not grindy, but can be if you want to by continually retrying levels to earn more coins or chase the leaderboard charts.
Additional Details

When contra meets megaman, gryphon knight happens.
Pros
- Secrets, lots of them.
- A wide selection of weapons to suit your shooting needs, each suiting one different playstyle.
- 3 Difficult levels that match what a person wants.
- Meaningful achievements(it actually feels like a real achievement to get hit 0 times on epic stages, those are tough!)
Cons
- The hitbox for some of the projectiles seems a bit weird, but nothing game breaking.
- Short playtime, its fun, but its short, having 2 endings somewhats add to playtime though.
Overall, the game is fun and i'd definitely recommend it for anyone thats a fan of shoot'em up like this one.

Full disclosure: I am a friend of the developers and a backer of this project on KS. That said, my opinion of the game would have been the same regardless.
GKE stands alongside the best shmups I have played. I am a fan of the genre from the days of 1942, R-Type, Raiden and, more recently, the excellent Ikaruga. GKE's medieval setting is a welcome detour from the typical themes of the genre, and fits the game extremely well.
Gameplay is everything you would expect from a modern shmup with a classic feel. Controls are tight - I have used a DS4 with the DS4Windows app and it works great, Frame rate is solid. The large number of items and sidekicks gives the gameplay variety and a helping hand when you need it. Hunting for runes is a lot of fun.
The amount of content in this game is tremendous for its price tag. Environments are very beautifully crafted and full of detail. Each stage is very unique and makes the game feel fresh even after several hours. Enemy sprites are generally good if sometimes too detached from the environment, and some of the animations might have been more polished.
There are many little easter eggs and references to games and pop culture in this game, making it fun to hunt for them in the text and scenery.
Overall a very highly recommended game for shmup fans. On Knight difficulty it should be pretty welcoming even for more casual fans, if you use items and sidekicks intelligently. Veteran shmup fans have only one option: EPIC difficulty!

A very fun and polished game. I like it as a gentler introduction to the shmup genre, with super cool exploration and RPG elements mixed in! For this price it is an absolute steal, as it is packed with content, bosses, secrets to find and really cool-looking stages!

Hidden gem. Worth it for the beautiful pixel art alone.

Gryphon Knight Epic brings some interesting gameplay tweeks to the classic shoot 'em up formula. It also has beautiful pixel art, tons of enemies and a well polished presentation.