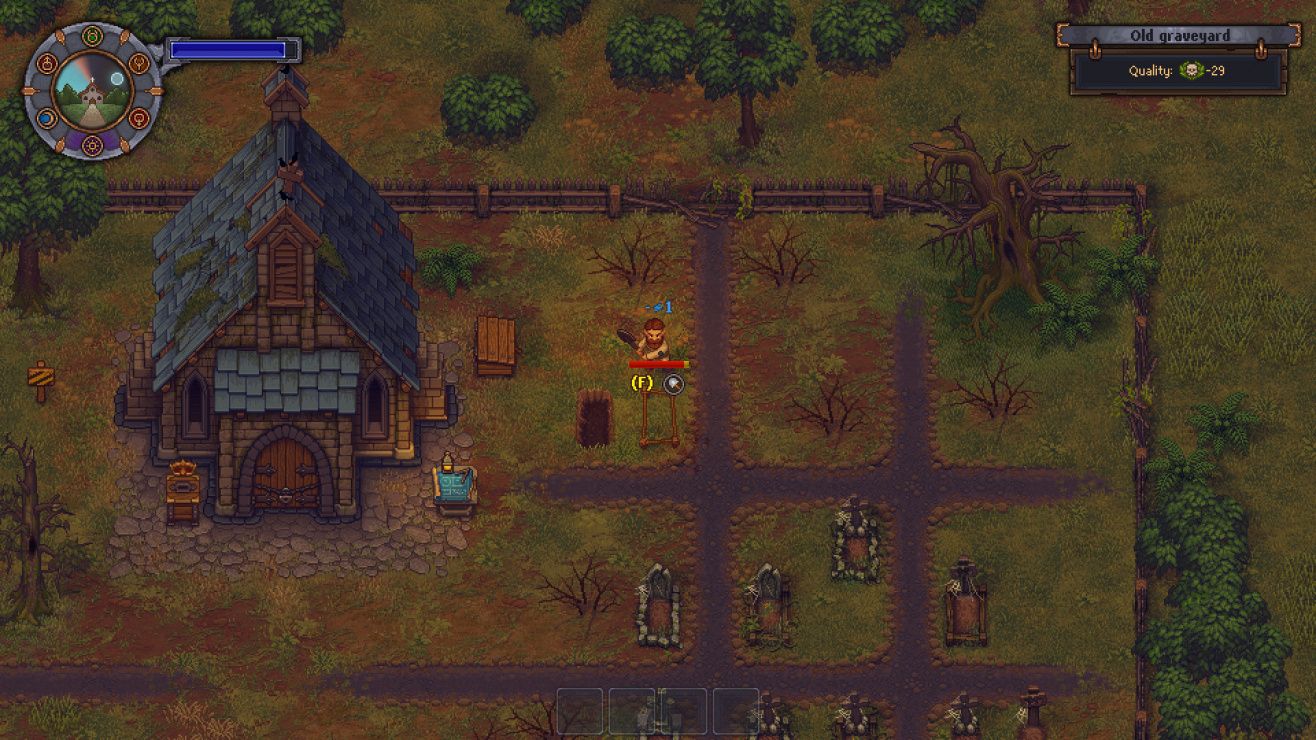 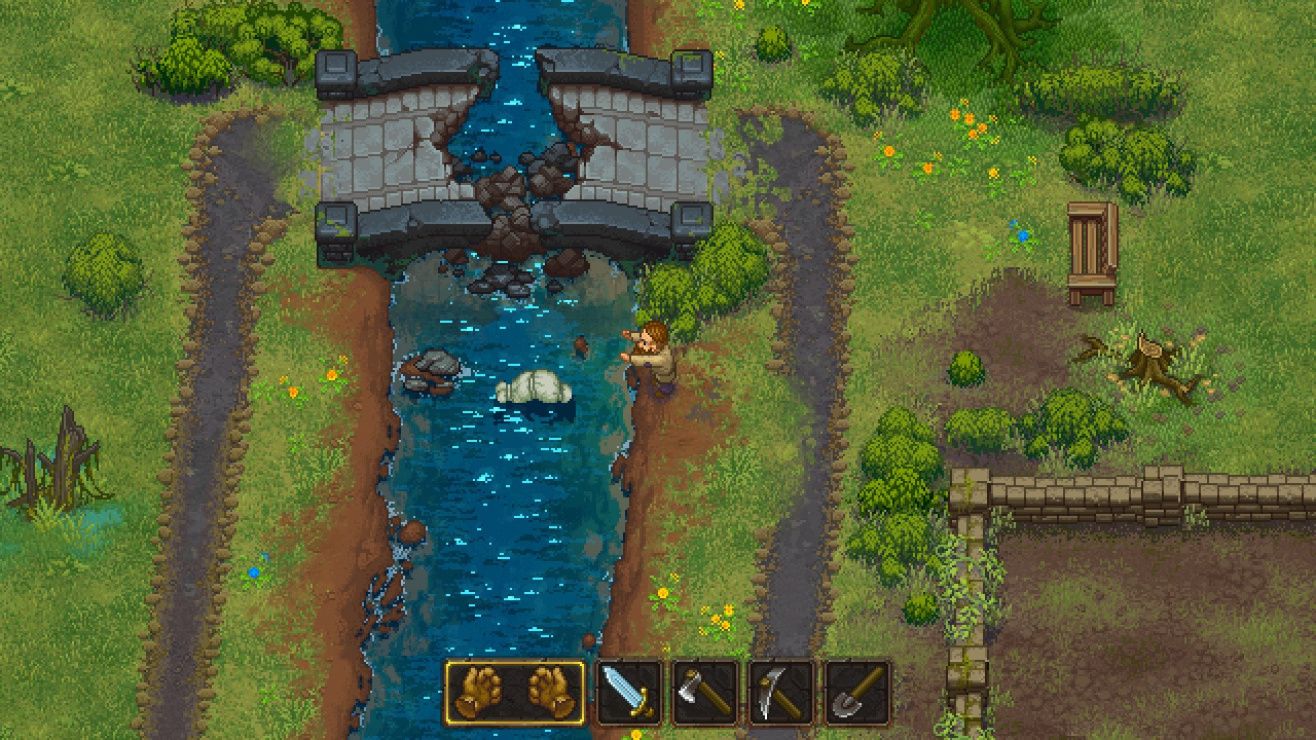 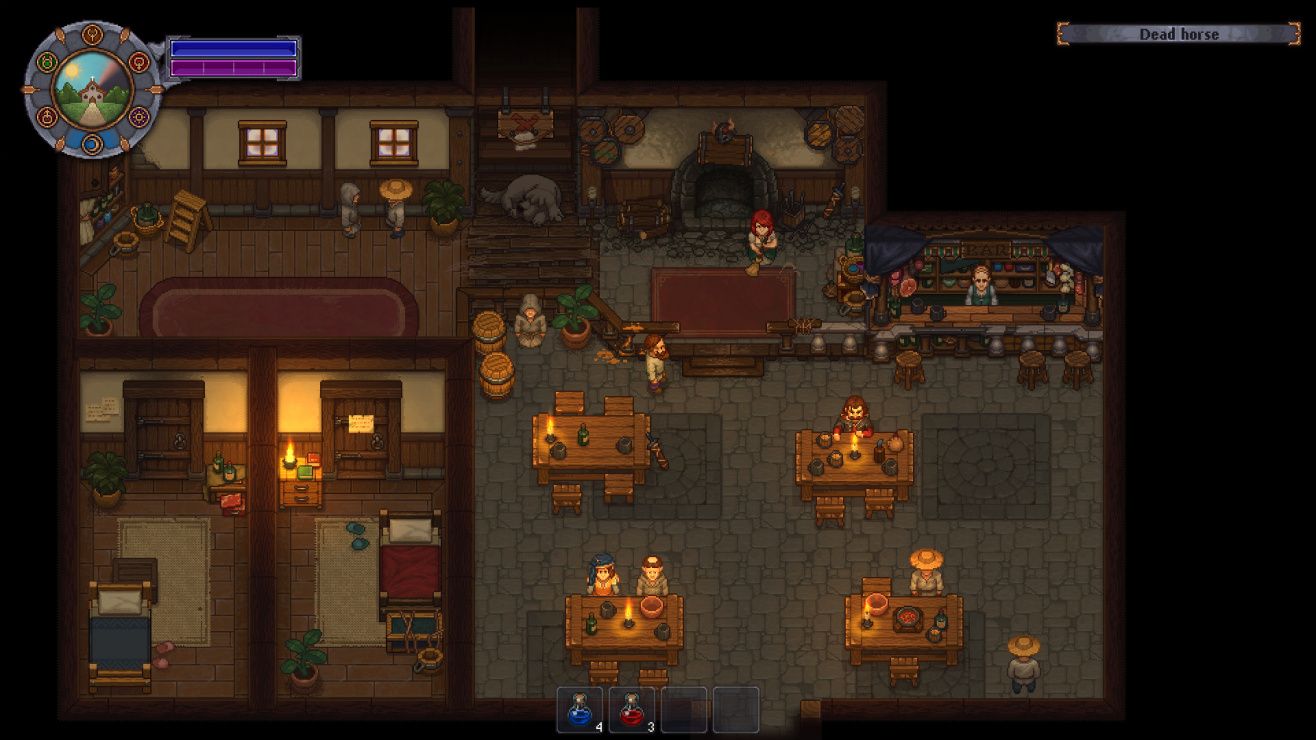 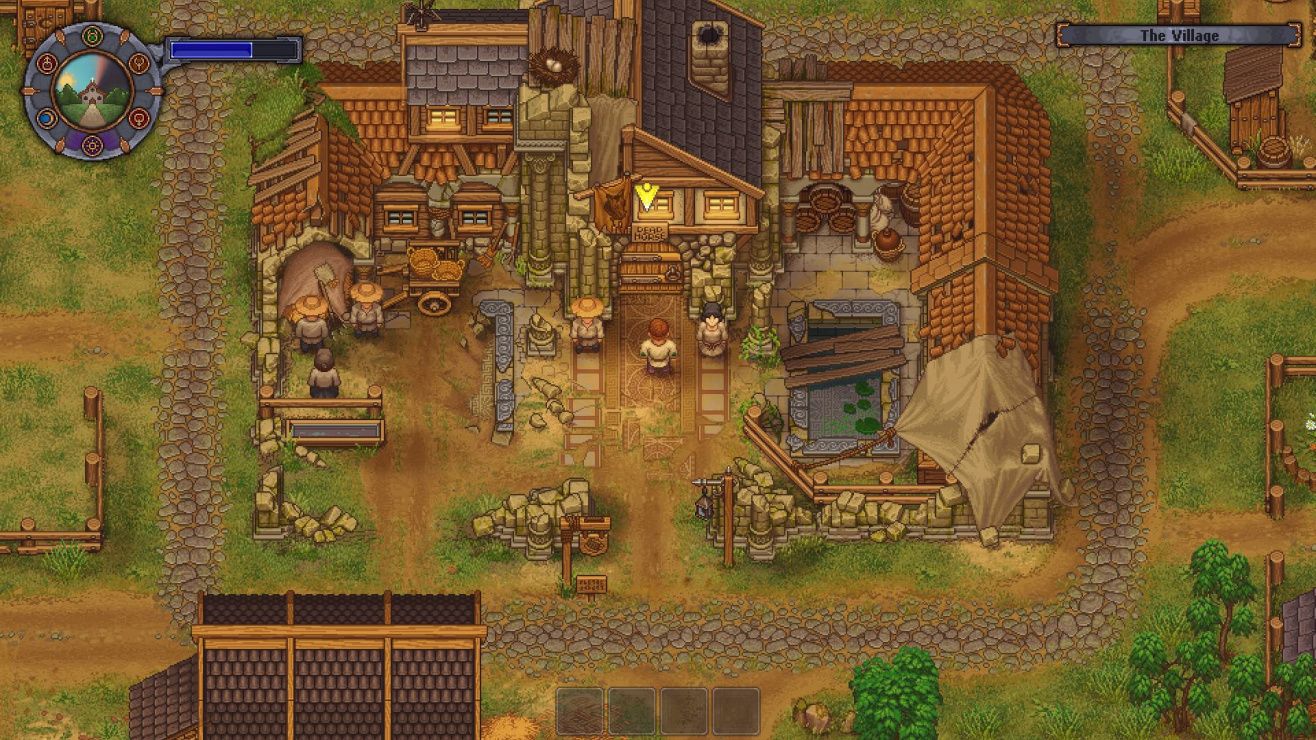 PC Steam Console Playstation Xbox indie Nintendo singleplayer rpg fantasy iOS Android Google Play role-playing pixel sandbox crafting
Graveyard Keeper is the most inaccurate medieval cemetery management sim of all time. Build and manage your own graveyard, and expand into other ventures, while finding shortcuts to cut costs. Use all the resources you can find. After all, this is a game about the spirit of capitalism, and doing whatever it takes to build a thriving business. And it’s also a love story. Face ethical dilemmas. Do you really want to spend money on that proper burger meat for the witch-burning festival, when you have so many resources lying around? Gather valuable materials and craft new items. Expand your Graveyard into a thriving business. Help yourself -- gather the valuable resources scattered across the surrounding areas, and explore what this land has to offer. Quests and corpses. These dead bodies don't need all those organs, do they? Why not grind them up and sell them to the local butcher? Or you can go on proper quests, you roleplayer.
Share Share Share
Promote for 50G

At this point, I've played for nine (Nearly ten) hours straight. In short, it's a great game, but definitely don't be afraid to go googling things when you're confused! Also a word to the wise, don't be alarmed when you get a quest that you cannot complete yet. Just let it sit, do other things, and eventually, it'll become really obvious what your next step is towards completing that quest.
I started off initially kinda skipping through dialogue and running around aimlessly with no clue what to do, so at about 3 in-game days in, I restarted and paid more attention. If you really read through everything and pay attention to what's going on, you'll do fine! Sometimes though, the game kinda leaves you in the dark. Some more touching up on the quest lists and recipes would be nice. Not everything I need to do is added to the NPC's list, I can't really find anywhere that says what I need for crafting unless I'm at the table, and sometimes I don't understand instruction but the NPC won't repeat it. But really, those are my only issues, and they're minor. As you play, you kinda just start figuring out to do when you get lost or confused, and naturally, the internet is a great source of explanation.
If you're someone who likes the typical farming sim (i.e. Stardew Valley, Harvest Moon, etc.), but also the kind of "darker" humor, you'll probably like this. It has the charming characters, pretty pixel environment, fun dialogue, great music, etc., that is present in a lot of good "farming sims" (Though, in this, while farming produce is an aspect, you're moreso farming corpses I guess?). On the flip side, this has more of a story than the other games I mentioned. While you are free to go about your business, there's a lot more linear stuff to do than just "plant seed, grow plant, sell plant, buy chicken, pet chicken, sell egg, etc." It's more like, there's all these characters with different requests, you satisfy said requests while unlocking new features and tending to your graveyard. There's foraging, farming, gravekeeping, crafting, fetching, and so forth. You progress more through specific tasks rather than just collecting a lot of money from selling things. It's enough like a "farming sim" that I feel like I can compare it to one and recommend it to friends who like farming sims, but different enough to be enjoyable and unique in its own ways. It really is interesting, in many more ways than one, and the darker content is something that isn't usually very present in this genre of games, I mean, you start off with someone getting in a car accident, and within the first few minutes of the game, you're digging up a skull that tells you how to harvest human flesh. (Not really that big of a spoiler, but whatever)
As a small side note, if you're someone who is more comfortable playing with a controller, I feel as though it is very controller friendly and even the menus are easy to navigate!
It's got great humor, interesting mechanics, some pretty intricate crafting, and is overall done very well. I mean, I played it for nearly ten hours with no break. It is now 4am, I have work in the morning, and I've lost all control over my life and sleep schedule because of a communist donkey and talking skull with amnesia.

So I pre-ordered this game on the Tiny Build site, bought in at the highest tier I could, specifically for the art pack and soundtrack. I figured it was a great buy, and when the game released I was quite pleased with how the game played, and chuckled at the little jokes in it. Loads of fun.
HOWEVER.
When the game ENDED, I basically just got a cutscene of Keeper and Gerry flat out saying all the things that were promised on the tinybuild site prior to full release were now going to be marketed as DLC, instead of being in the full game as advertised.
To say I was upset is like saying a tornado is 'windy'.
I will not buy another TinyBuild game, because of that bait-and-switch.
Yes, the game is good, but TinyBuild's actions speak of a serious concern for any consumer.
This review is referring to when they added the ending in 1.0, so they've likely removed the actual conversation.
Caveat Emptor, my friends.

This is a fun game with fun quirky dialogue. A few game play elements need fine tuning, such as being able to bulk produce some items but not others, and you can make an item such a high quality it becomes worthless. I highly recommend getting both DLCs immediately from the start. All parts can be done together, and provides more lore and a well rounded experience.
PROS:
-B+ crafting system
-Great tech Trees
-Automation in later game allows player to not be constantly grinding out resources.
-Funny Dialogue
-Interesting Characters
-Interesting World
-Lots of things to do
-Fairly Chill game
-Fishing minigame
Cons
-Hurry up and wait, some quest lines involve waiting for the right day to do things, one quest had a wait 4 days, then wait 3 days then wait 5 days to complete something I already knew the solution to. (The DLC is better and worse about this, and offers more activities to do in the in-between time)
-Holes in crafting system, not everything can be made in bulk or automated, and some things require silver quality ingredients, and gold quality will not suffice.
-Not everything is automated, even though it makes sense for it to be automated. LET ME AUTOMATE THE HONEY FARM ITS OUT OF MY WAY AND CAN BE HARVESTED DAILY
-Missable achievements near end of game.
My level of experience with this game:
I beat the game, then bought the DLC, then 100% the game. I used no cheats or exploits.

Don't play this game without Stranger Sins installed.
While the game-play doesn't change, it does extend the playtime a little.
The main reason is that it really gives a massive upgrade to the story and characters, and the end game is brilliant to experience as a result.

Very very grind-y.
I highly suggest installing mods that allow you to sprint & increase crafting speed.
I was about 8 hours in when I decided to do that and I STILL took 60 hours to complete the game WITH mods.
It's WAY WAY **WAY** too grind-y
But that being said?
The art: Absolutely fantastic A+++++ +
The characters: Hilarious and adorable
The story: Compelling and interesting
The atmosphere: Very immersive & enjoyable
Totally enjoyed this game.

A chill indie game with the unique setup, dark humor and not as much NPC content as Stardew Valley has. It has slower, a bit repetitive pace that was perfect for me to play while listening to a podcast.