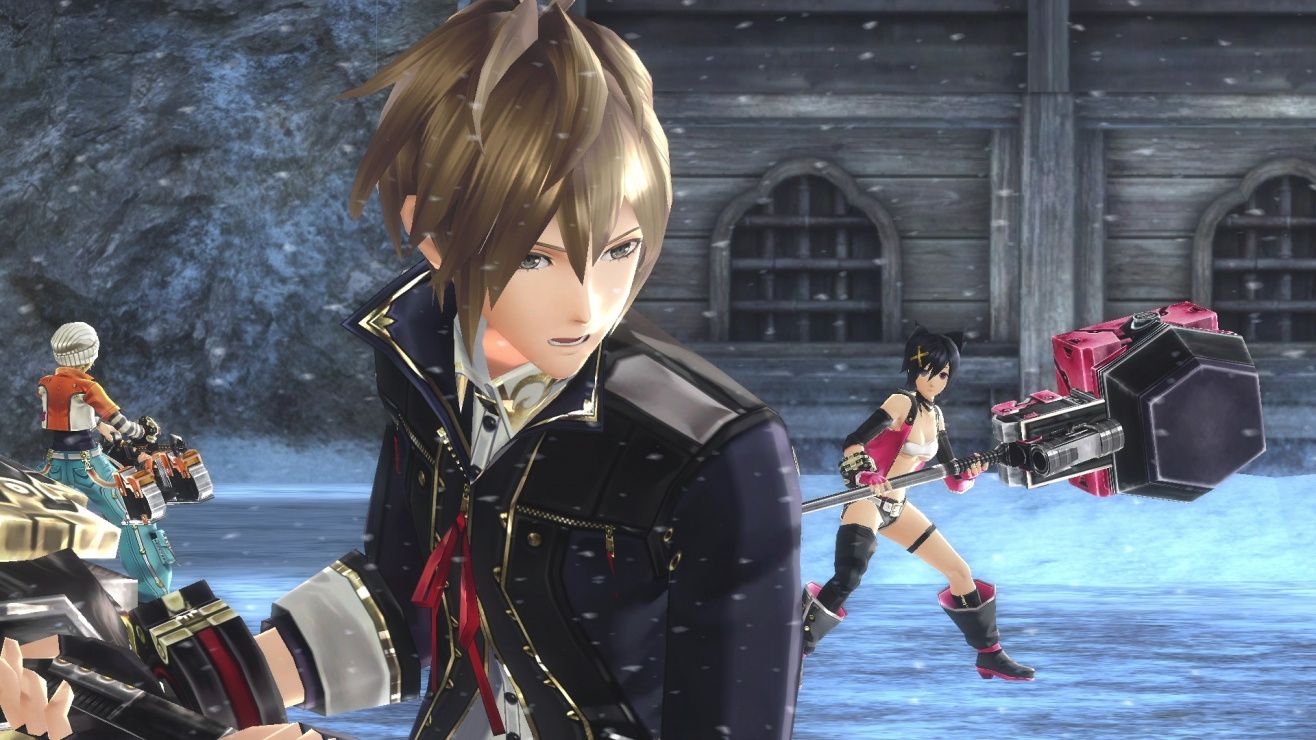 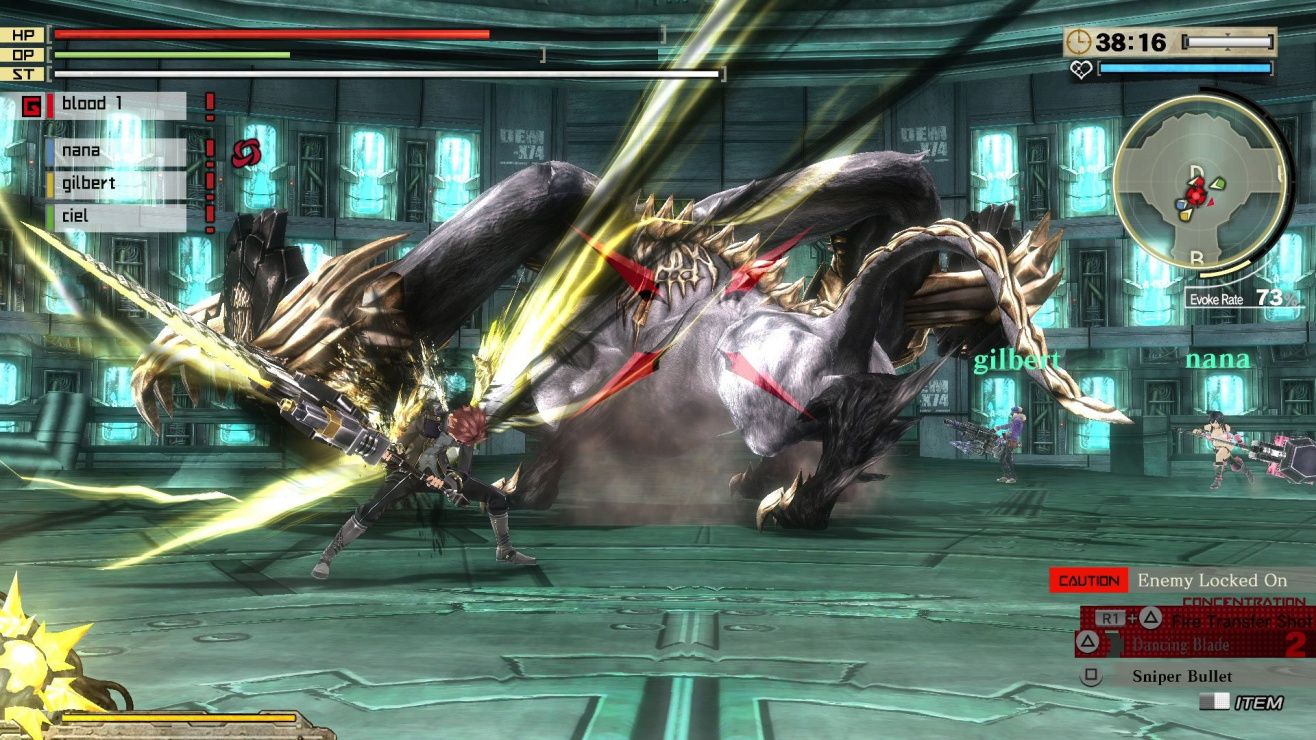 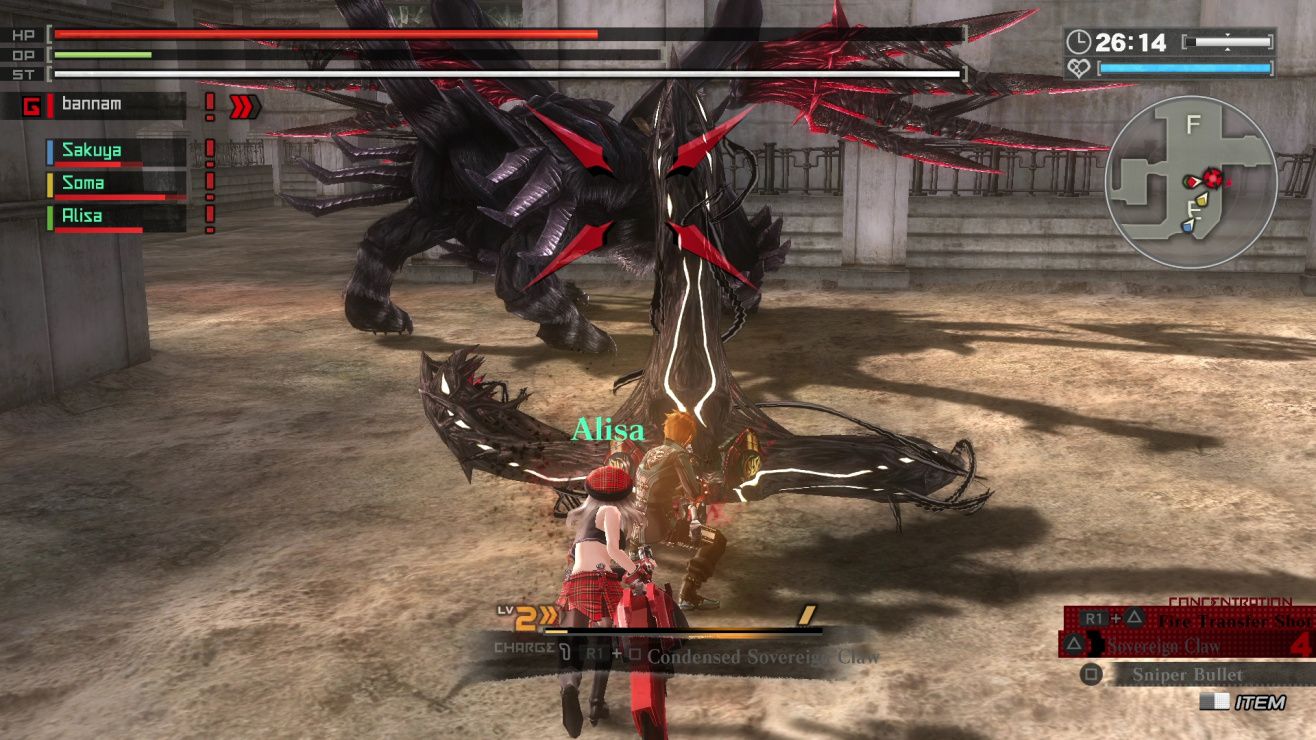 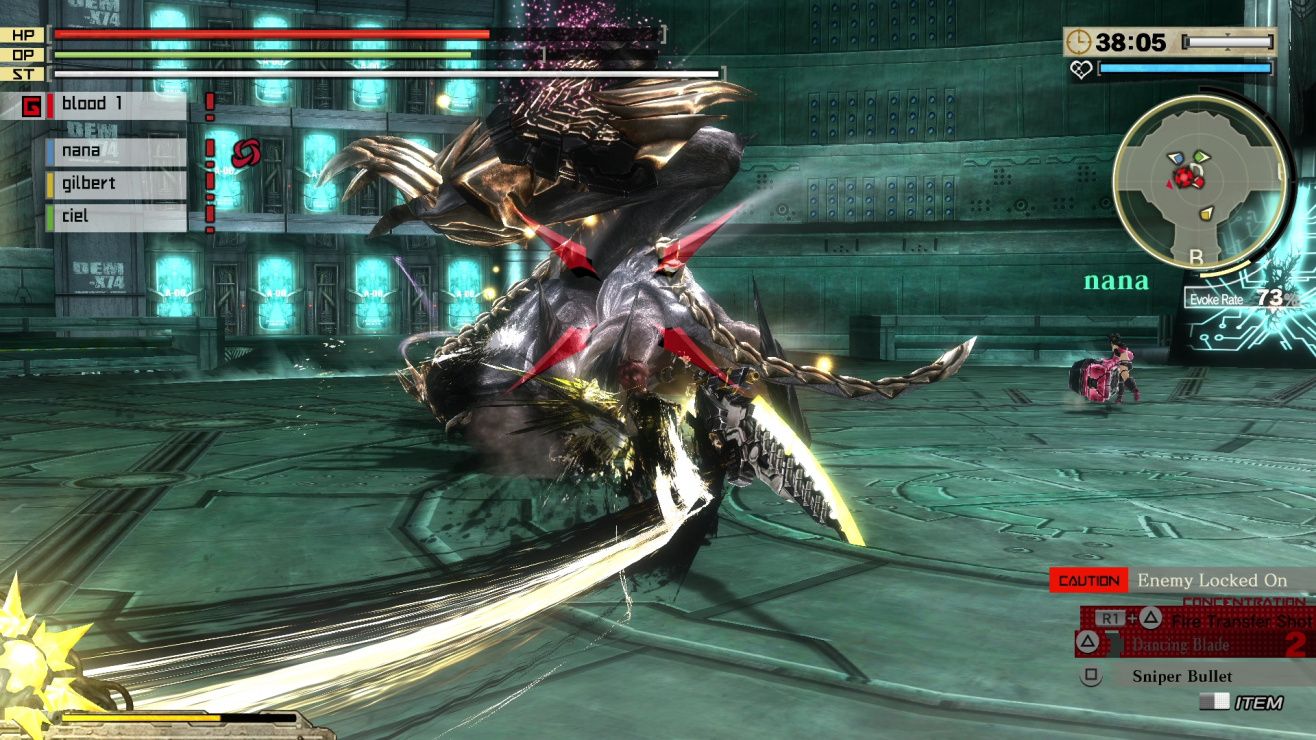 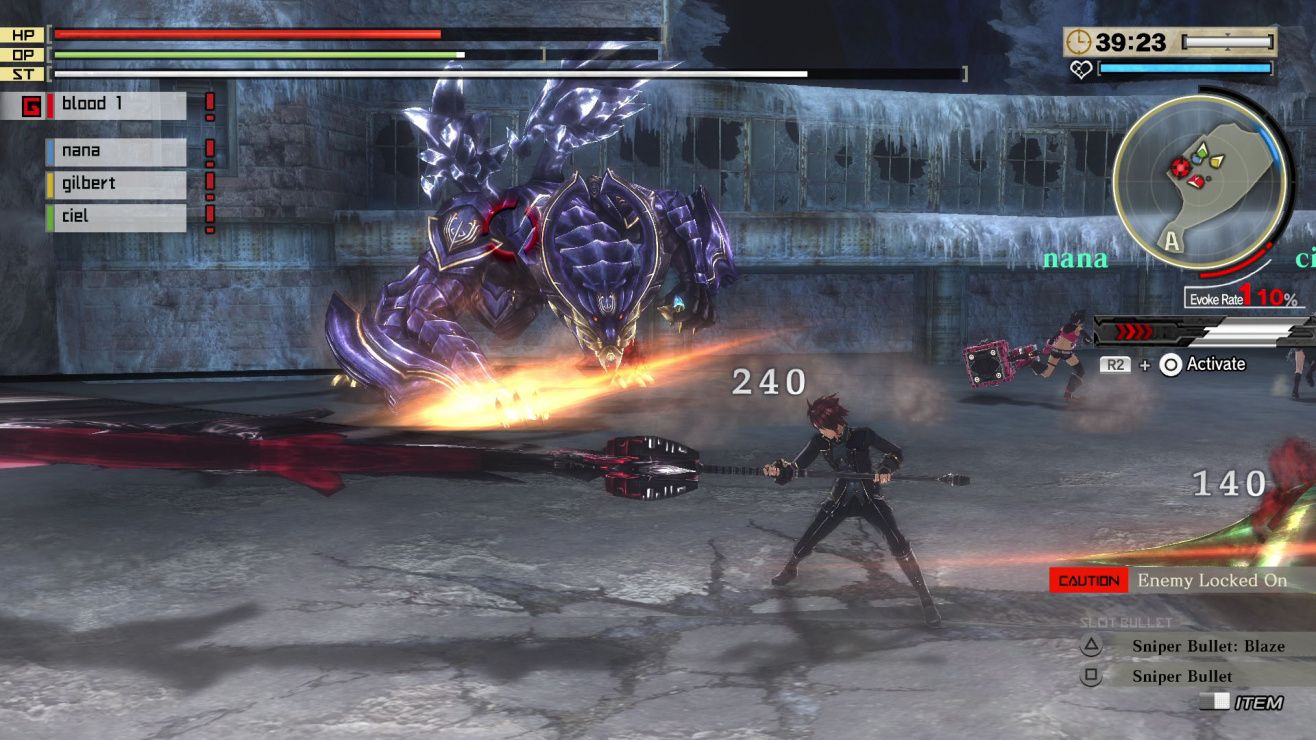 PC Steam Console Playstation action singleplayer rpg co-op anime character customization
Start your journey in GOD EATER Resurrection as a new member of the GOD EATER elit squad. Your mission is to defeat the Aragami and gather material from them for research, but you come to realize that you are being drawn in to a giant conspiracy that will irreversibly alter the fate of humanity. Three years after the events of GOD EATER Resurrection, a mysterious red rain sparks a fatal pandemic called the Black Plague. Members of the Special Unit “Blood”, an affiliate of the Fenrir Organization, are sent to investigate... In comparison to Gods Eater 2 Rage Burst there are new features and additions such as the four new weapons, the Boost Hammer, Charge Spear, the Variant Scythe and the Shotgun, each has its own function and abilities for the player to use. The Boost Hammer is a large hammer fitted with a rocket booster.
Share Share Share
Promote for 50G

In my ongoing and likely futile effort to write a Steam review for every game in my library (#458 out of 612)... it's time for God Eater 2: Rage Burst.
Going into this I should probably state that I'm not terribly fond of the Monster Hunter-style of game, and God Eater 2 is a very much a Monster Hunter-like. (Is this even a recognized subgenre yet?) As such it's built around the same basic formula: go out and fight large bosses with grossly inflated HP-values that take far too long to kill, hope they drop some good loot, and then use what you can to craft whatever equipment upgrades you can manage. It's a solid, well-refined Skinner Box formula that works very well in multiplayer games—where, I'm sure, God Eater 2 shines—but I tend to play my games offline, where the progression curve for most Monster Hunter-likes is an unendurable slog.
God Eater mostly differs from Monster Hunter in that rather than wilderness, you'll be doing most of your monster-slaying in a generic post-apocalyptic setting. God Eater 2 is (shockingly) a port of a Playstation Portable game, but the PC port does an excellent job rendering everything in HD (parts of the game are genuinely gorgeous and the anime-style character models are among the best I've seen) but you'll still be dealing with small, empty environments constructed out of extremely low-poly assets.
Anyway, there are several key differences between God Eater 2 and Monster Hunter you should be aware of:
1. Combat is much more fluid, with less of a delay between input and action.
2. Each weapon can transform into different modes – typically melee form, ranged form, shield form and monster form.
3. There's much more of a narrative focus (NPCs have actual names, for starters) and if you're playing offline you'll be supported by generally-helpful NPCs instead of being forced to solo everything.
4. The whole game is presented in a very fanservicey anime aesthetic that gives you a lot of freedom with regard to character customization—which you can modify at-will after starting your game.
So with all of that in mind, I think God Eater 2 is definitely one of the better Monster Hunter-likes, and in certain respects is a better game than Monster Hunter itself. If you're looking for a good story-focused game, I'm not sure it will deliver (what I saw of the story was pretty dull) but for a customization-heavy Monster Hunter-style game, God Eater 2 seems more than capable enough—especially so if you think you'll be dabbling much with the multiplayer side of things.

the only thing that this game need is Japanese dub, SERIOUSLY !!

It's Monster Hunter, but anime. Also it's faster than MH, you are usually accompanied by 3 NPCs and often you must fight several medium or large aragami at once. Most missions are quite easy regardless and you are unlikely to feel challenged unless you go out of your way to not upgrade your equipment or try one of the most difficult challenge missions.
On that note the games can be quite grindy if you really want a certain piece of equipment, I just listen to something in the background while I play in those cases.
It's not hard to go from God Eater Resurrection to God Eater 2 Rage Burst and vice versa thanks to the retroactive improvements brought to the former for the definitive release, but I'd still recommend playing them in order because the tutorial in the second game is kinda anemic, I believe the developers expect players to play Resurrection first.
I've seen some people praise the story but I found it kinda cheesy and cliché ridden, it's hard for me to not see Alisa as a a discount Asuka and Ciel as a poor man's Rei from Neon Genesis Evangelion. Not to mention Romeo, Gilbert and Julius are Kota, Soma and Lindow 2.0 respectively, a lot of themes and character traits are repeated in God Eater 2 and I think the first one did it better. However I do like that we actually have a reason to go around exterminating cool monsters instead of just doing it for sport.
Overall I found both games to be a positive experience and I'm glad I played them. They are kind of pricey for their age if you only want God Eater Resurrection or God Eater 2 Rage Burst so I think they should have different store pages, but they are great value together nonetheless.
By the way I hate Hibari in the first game, Jesus Christ she never stops screaming. That's the last thing I need when a mission goes south to help me calm down and assess the situation.

I Bought the game for Alisa Under titty

+ Many gameplay improvements over the first game.
+ Guns are still OP.
- First game's story was better.
- No Japanese audio when there are idols in the game