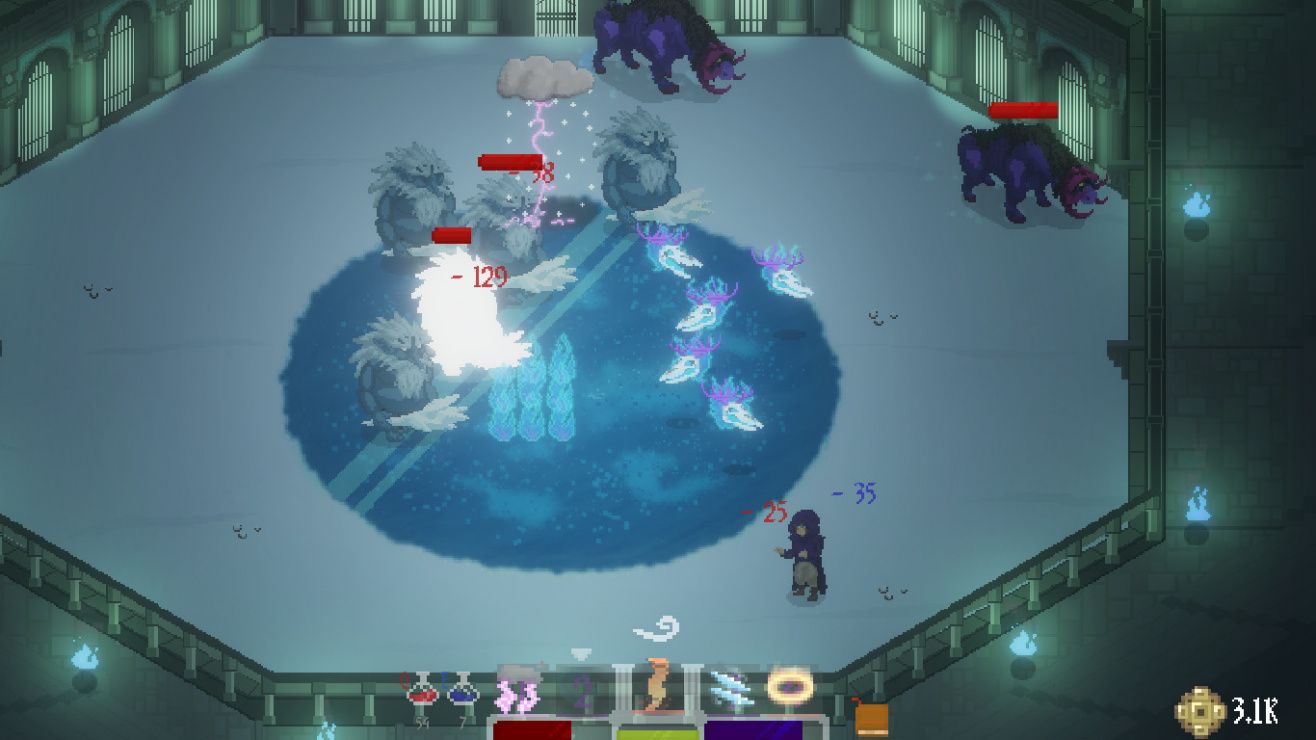 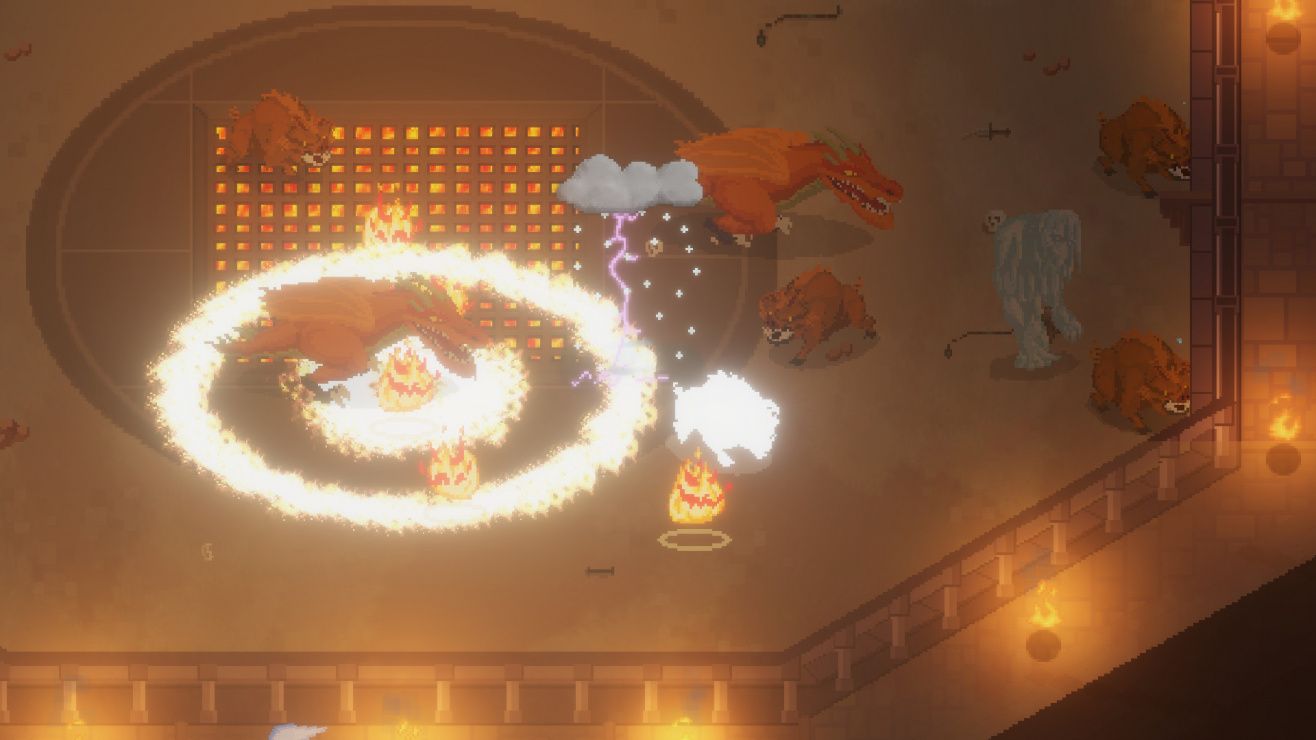 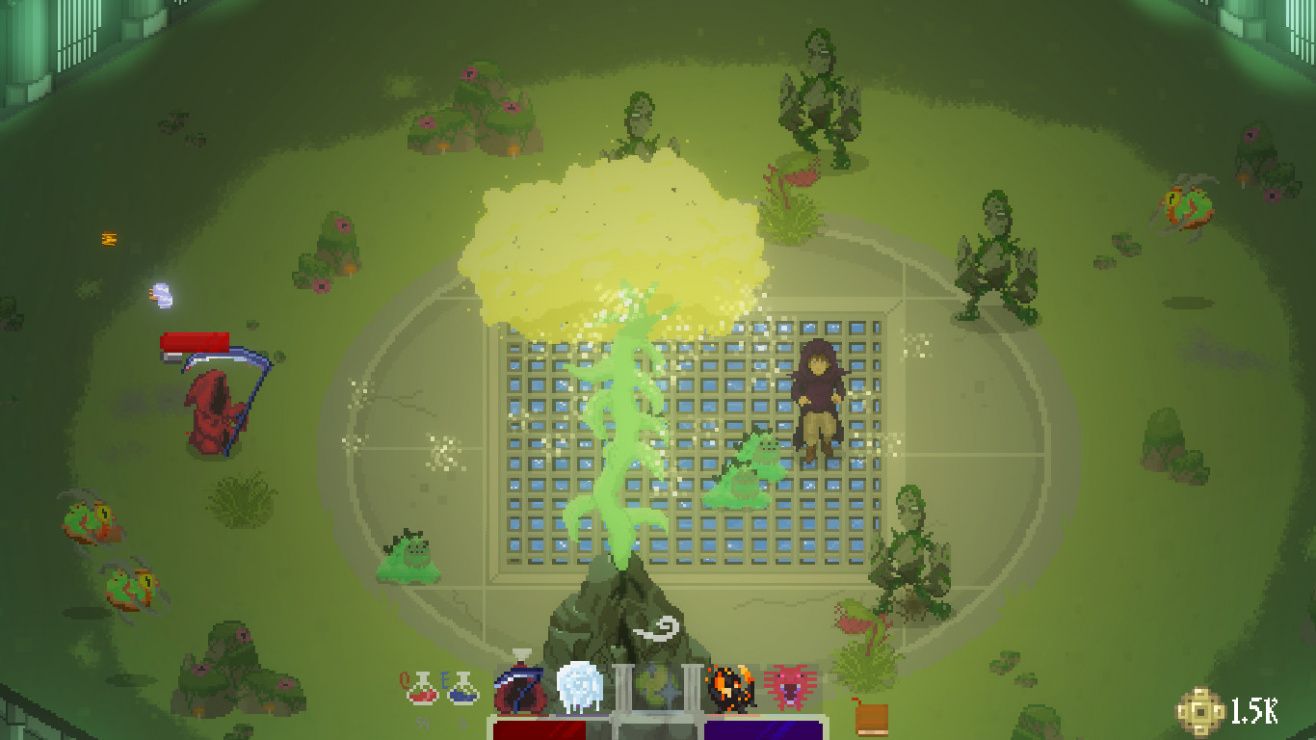 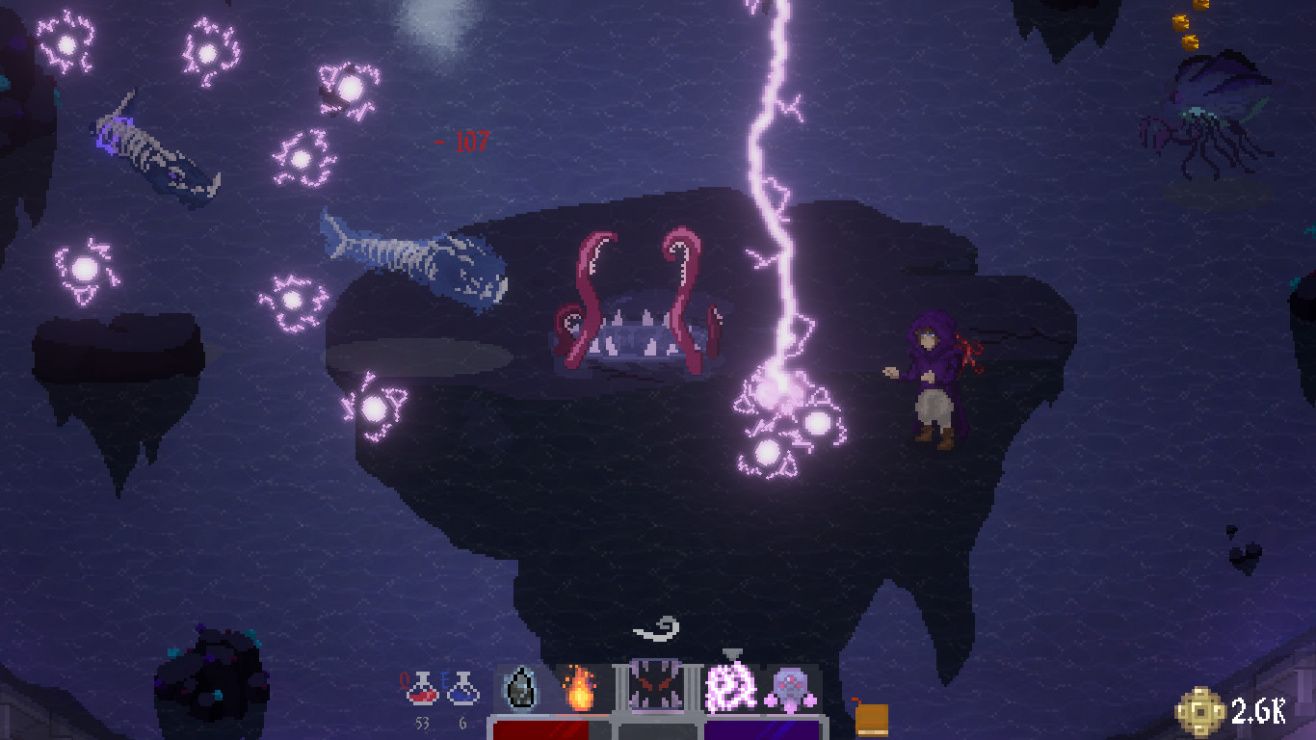 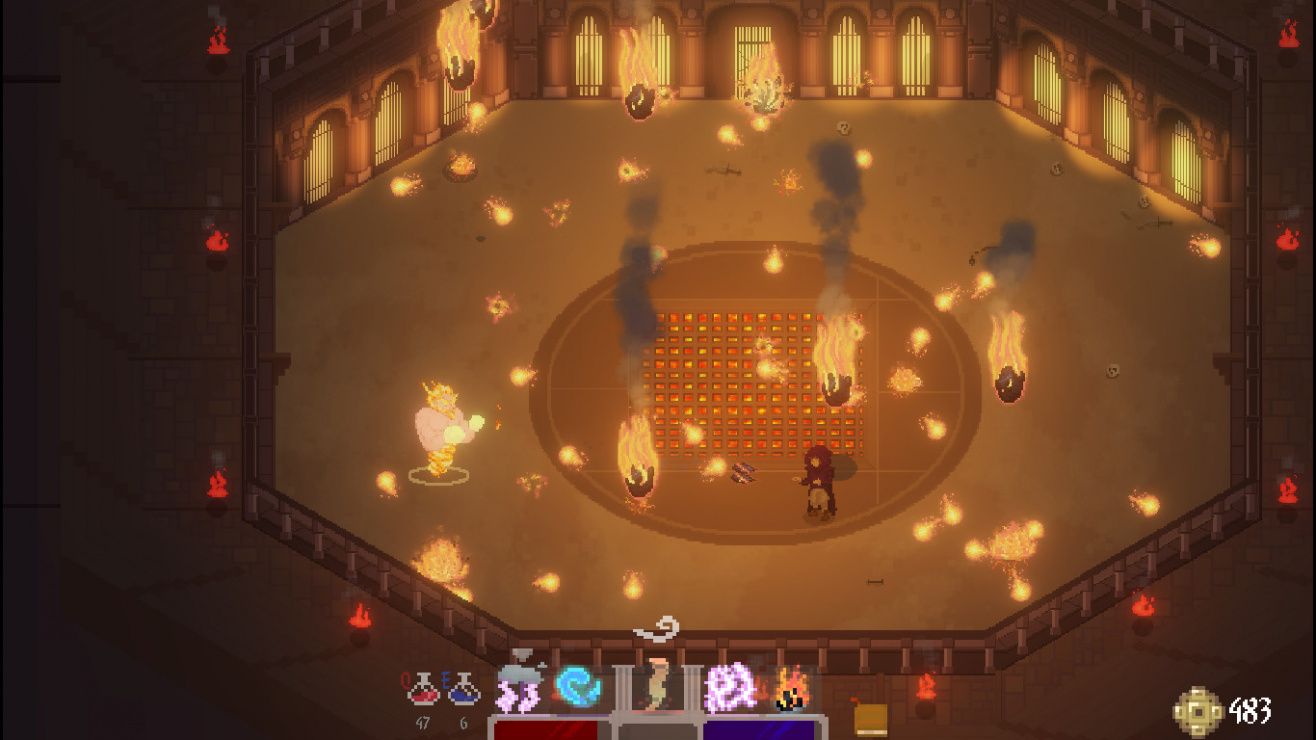 2d action adventure fantasy indie pixel
Follow the story of the purple-cloaked runaway wizard, Arif, on his quest to save his friend’s life. In a world where wizardry is outlawed, the magicians, Arif and his companion Veleus, were captured by a group of agents during their escape from the Kingdom of Duredyll and thrown into the dungeons. One day, Veleus, was sentenced to fight for his life in Atixa’s Grand Colosseum, run by a powerful mage by the name ‘Parthax’. Veleus fought valiantly, but was severely injured and incapacitated following his defeat. Arif heard rumors of his condition and knew the only way to save his friend would be to surpass any opponent standing in his way of attaining the champion’s prize, his friend’s only salvation, the Gift of Parthax.
Share Share Share
Promote for 50G

From its top-down, pixelated 2D graphics to its straightforward plot set in a medieval fantasy world, Gift of Parthax newest creation may appear to be an ode to simpler times. But Foldergeist Studios’ brawler packs quite a potent punch. The game’s fighting system is deceptively multifaceted and allows players to experiment with a wide variety of options, and its levels truly test players’ mettle.
The game begins by giving exposition about the fantasyaaa world its story takes place in. Tensions between the mages and non-magical humans of the Kingdom of Duredyll have reached a boiling point, inducing the mages to attempt to flee the only home they have ever known. However, not all mages were so lucky as to escape.

The mages Arif and Veleus were captured by agents during their desperate dash for freedom. Veleus was forced to fight in a competition hosted by Parthax, a mage whose skills have no equal. Veleus sustains a fatal injury while struggling for his life, and Parthax decided to draw out Veleus’s misery by letting the injury slowly kill him from the inside out. But by not finishing Veleus off, Parthax left room for someone to come and win the only possible item that could save him: the champion’s prize.
And that’s exactly what Arif plans to do. Gift of Parthax commences with Arif embarking on a quest to save his best friend by fighting in Parthax’s contest. Players control the young mage as he initially enters the Grand Coliseum and begins to fight Parthax’s minions.
Parthax’s competition takes place in multiple stages. Arif begins to fight during the spring, but the game spans all four seasons and more when all is said and done. Each season contains five levels that players must progress through and concludes with a boss fight. Depending on the choices that players make during the boss fights, they will get one of four different endings when they complete Gift of Parthax.
The levels themselves prove to be intense, even on the game’s normal mode. Although the spring levels may not be all that challenging for players depending on their experience with brawlers, the summer season ratchets up the difficulty with alacrity. Players will soon be facing off against beasts of mythology like dragons as well as magical creatures.
Originally, Arif is solely able to sling fireballs at his enemies. But Foldergeist Studios crafted a significantly richer fighting system than just that. Players can customize their playstyle by unearthing six magic elements, 29 spells, and 27 spell-enhancing runes. They can unlock these augmentations by purchasing them from a shopkeeper after earning money by winning matches in the coliseum. Before they know it, players will be setting traps while lithely dancing across the battleground and poisoning their enemies.
Despite being so full of depth, the combat isn’t even the best aspect of the game. Foldergeist Studious absolutely nailed it with the in-game music. The music fits the gameplay perfectly and really adds to a player’s level of immersion. The art style also proves to be a boon when it could have been a detriment, elevating the game by being stunning. It’s evident that the character designs, animations, and environments were all created with love and care.
While the fact that Gift of Parthax doesn’t really tie back into the interesting world that it described in its exposition in any meaningful way feels like a missed opportunity, the game still does a lot right. Fans of the brawler and fantasy genres shouldn’t hesitate to pick this game up and give it a try.
Rating: 8.5/10

Art style
The pixel art in this game is absolutely stunning. Not only are the characters creative, but also beautifully made with awesome animations. Not to mention the pretty environmental art inbetween the "Hall of Preparation" and the arena fights, and in the room after a completed challenge. Hats off to you guys for making such a visually pretty game Foldergeist Studios.
Gameplay
At first I found it hard to get to know all of the controls after the tutorial, but a quick peek into settings did the job. When I played the first challenges in the first season, I found the gameplay pace kinda slow. However, after completing the first season, the game's difficulty and pace increased. Even though that the first challenges were slow, it did help me to get into the game and prepare me for the upcoming battles in the 2nd season. I really like that the devs thought of making it this way as new players, such as myself, could get a chance to feel like as if you were a really powerful mage before advancing to harder challenges.
Music
I loved the music in this game, I found it to be really motivating in the arena as the music (in combination with the surroundings) made me feel as if, I was acutally present in the arena.
I'm currently working my way towards the 3rd boss and I look forward to see how difficult it will be and what will happen next. I would definitely recommend this game to not only my friends but also to other people that I know. If you like arena games and pixel art, Gift of Parthax is definitely a must play in my book. I'm sure you'll enjoy playing it as much as i do if you're into these kind og games.

Great game that really sucked me in with it's gameplay and story.
The pixel graphics are good, the controls are simple to get the hang on and the music really sets the mood.
All in all a great little game that is definitely worth it's price!

Arena battle type game where you have mana based weapons to fight against the hordes.
There are several waves per battle and several battles per season you need to get by.
The game is quite alright.

Steam Play-ready enough for a ThumbUp in my book of magic.
And it plays fine at 3840x1080/32:9 (though you cannot zoom in/out).
Edit: Playable native Linux build in a dedicated beta branch, see