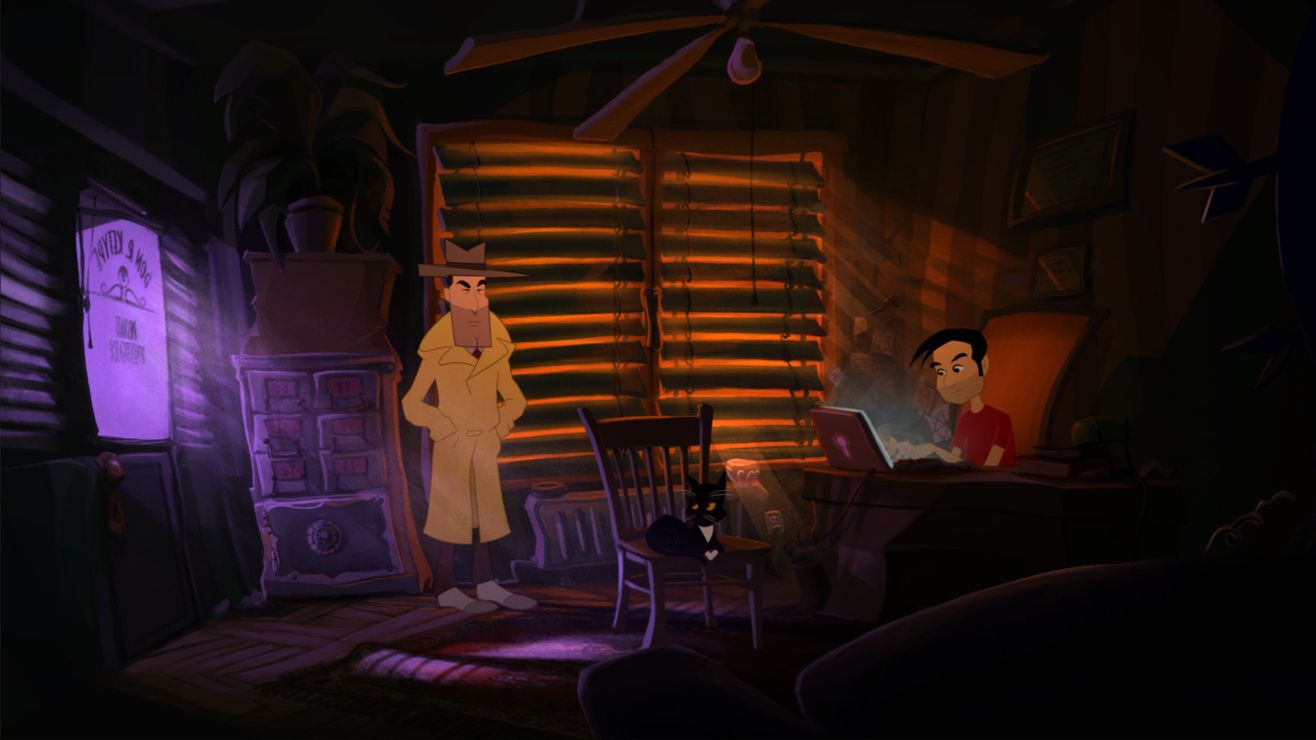 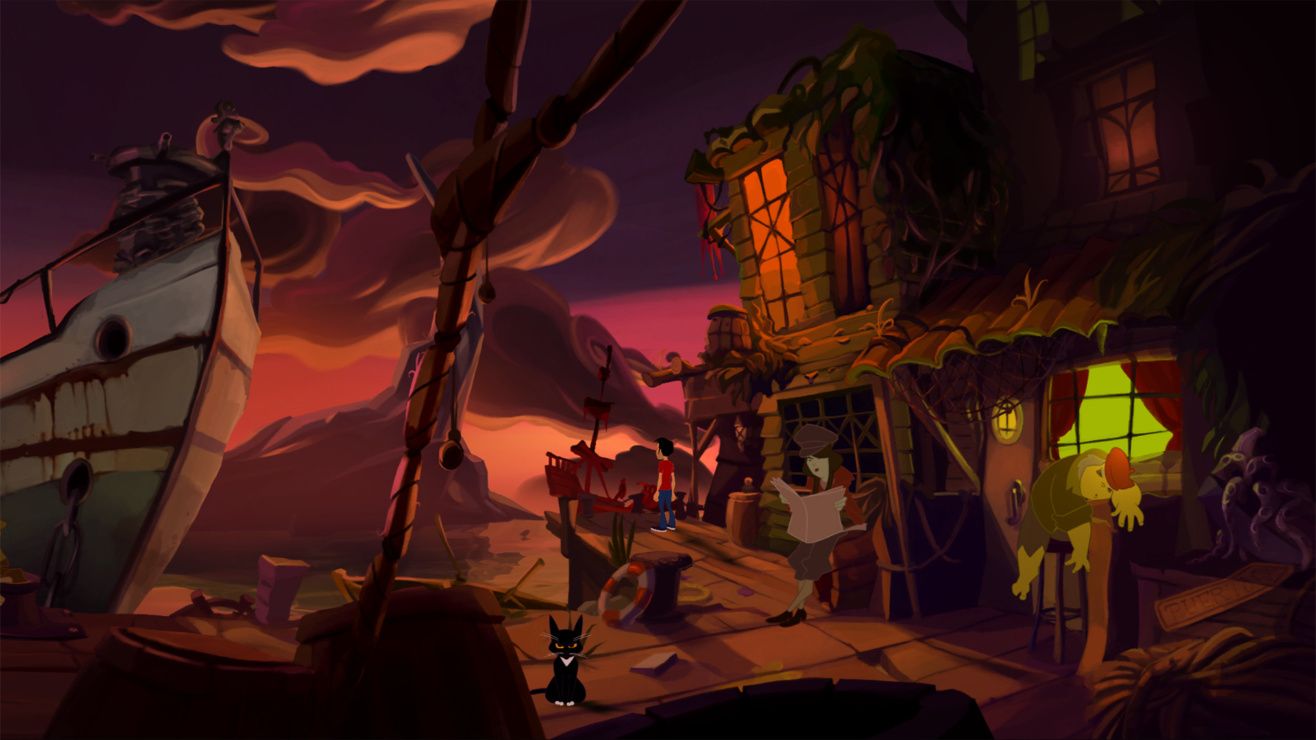 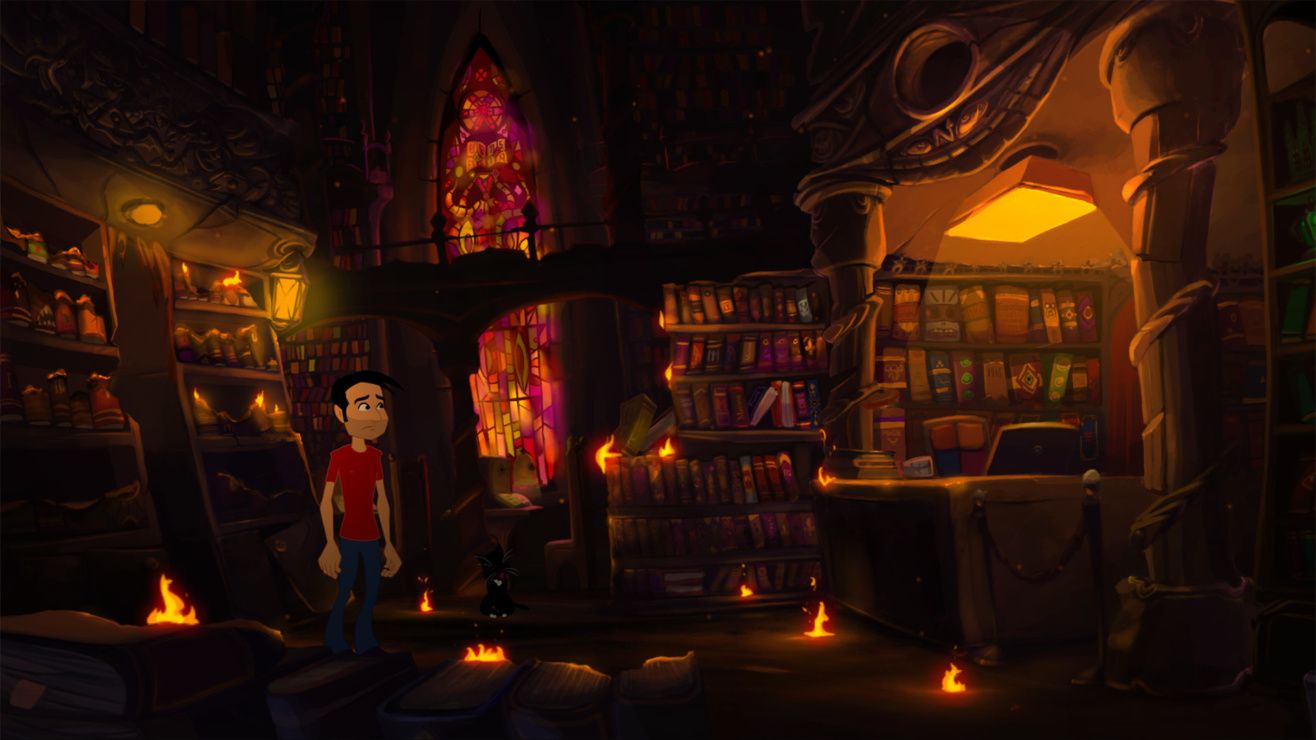 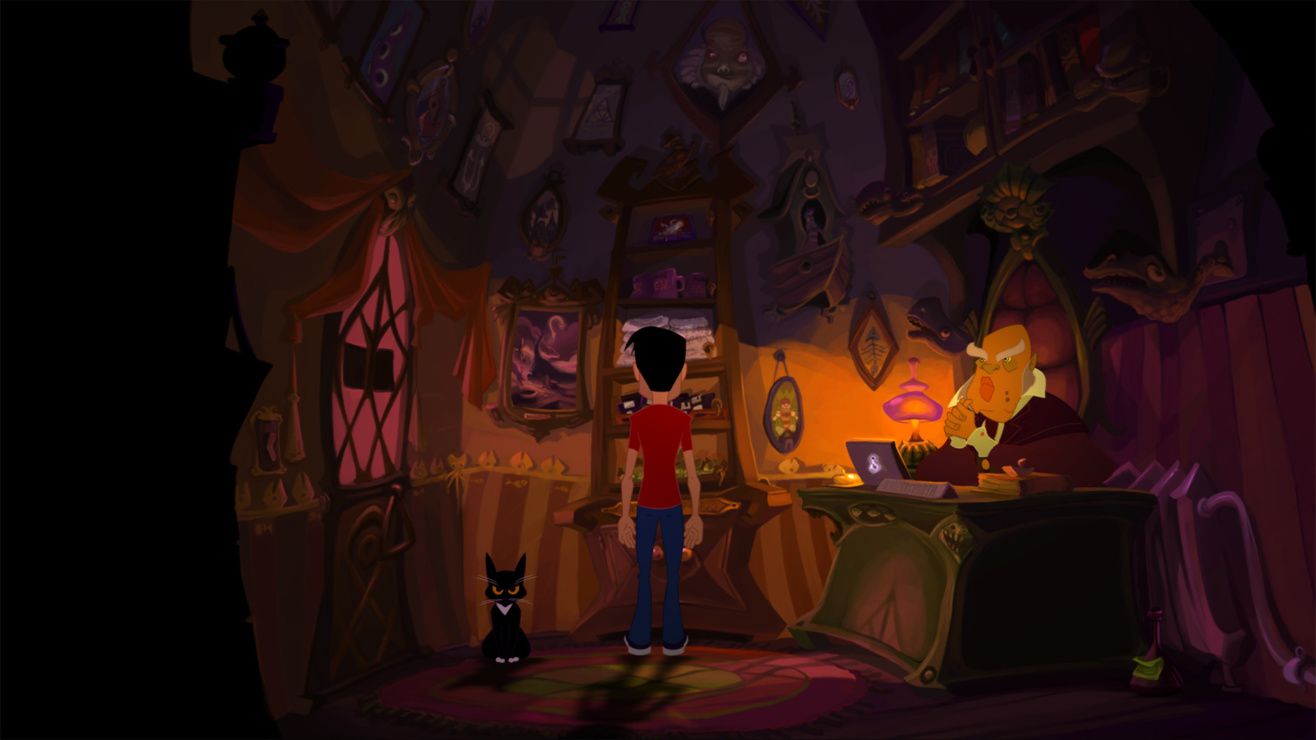 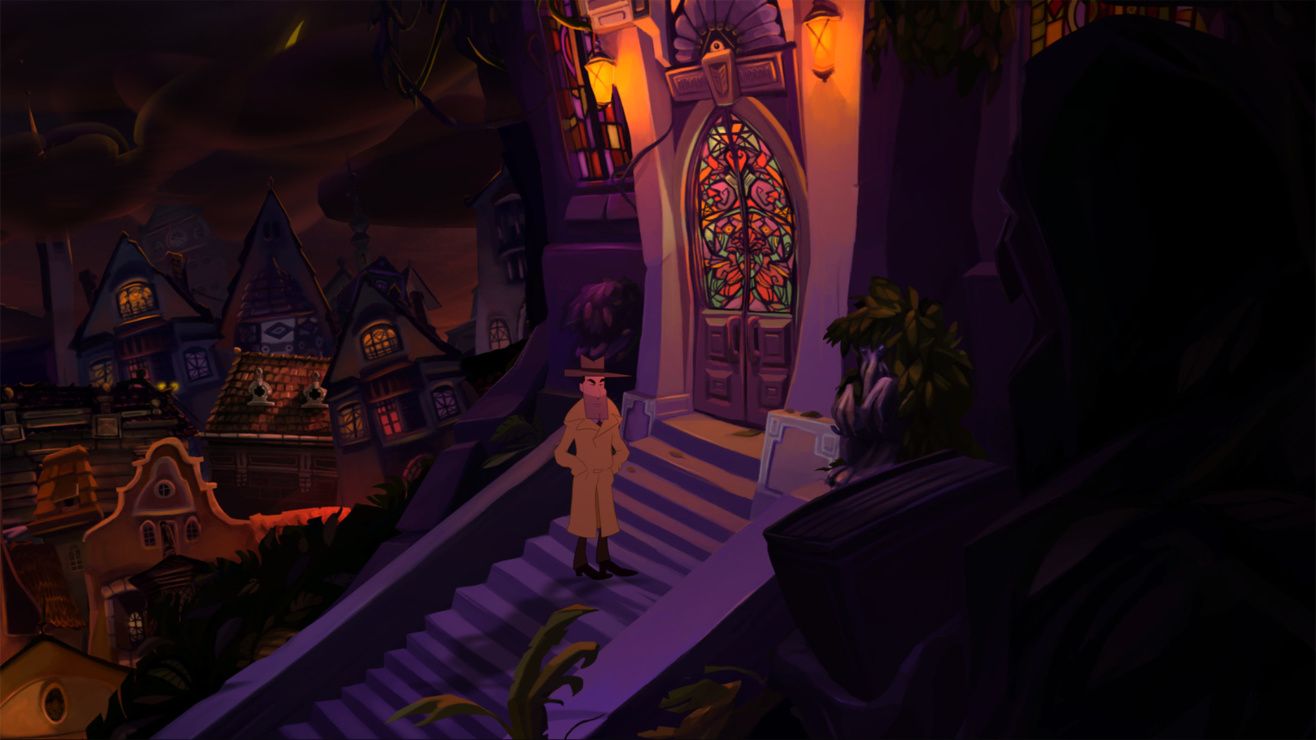 2d adventure cats funny indie puzzle quest singleplayer story
A comedy cosmic horror adventure made in Transylvania. Darkham, with its crooked gambrel roofs, dark alleys, and a past shrouded in secrecy, never really was a welcoming place, but nowadays? Kooky cults are popping up everywhere, and that most evil book, the Necronomicon, is spoken of in trembling whispers once more. Detective Don R. Ketype is on the case to retrieve the mysterious evil tome, but unsuspecting librarian Buzz Kerwan stumbles upon it and accidentally transforms his cat, Kitteh, into a walking, talking abomination. Being humanized? Quite a downgrade. Gibbous is a comedy cosmic horror game - a modern adventure that is classically inspired, features gorgeous HD art, detailed traditional animation, and a lengthy story that will see the three protagonists travel around the world and deal with abominations both cosmic and human-made, voodoo, and Things That Should Not Be. From Lovecraft Country to Transylvania, set off on a quest to get a very cynical cat to stop talking.
Share Share Share
Promote for 50G

I really love this game, it reminds me of the old Lucasarts adventures I adored growing up, but with a modern and darker twist.
The game isn't particularly difficult (I'd say 2 puzzles require a bit of thinking, the rest is pretty straightforward) and it's not super long, which I actually consider a plus in this genre. The art style is great, the story is interesting and the characters are weird and funny.
I really recommend this to anyone with even just a passing interest in P&C adventure games.
I'll certainly look forward to anything else the devs, Stuck in Attic, decide to do next!

Review by Gaming Masterpieces - The greatest games of all time on Steam.
Is this game a masterpiece? Yep, it is.
I haven't played such a funny classic point 'n click adventure for quite a long time.
It starts with you playing a down on his luck detective, like in a movie noir. Very soon you are introduced to the next character you have to play, a rather intellectually challenged student working in the local library who reads a spell from the Necronomicon... which was maybe not the best idea. The third character is my favorite one: an extremely cynical, talking cat. They travel around the world, solving mostly object-orientated puzzles to advance the story and fight some crazy cultists. I found most of the puzzles fairly easy, btw.
It is inspired by a mixture of Discworld, Monkey Island, Runaway, Count Dracula... but mostly by dark Lovecraftian stories. Even Cthulhu himself is in the game. Absolutely my taste.
The graphic reaches Disney cartoon quality, has lots of cut-sequences and smooth animation. The game comes fully voiced, has an integrated help-system, and I found no bugs at all. It is also quite a long game.
Conclusion:
Awesome comedy point'n click adventure with witty writing and engaging puzzles.

While the puzzles are more straightforward then you might expect from the genre, it has the spark of brilliance within it. The Visuals are charming, the Easter eggs, both to other Lovecraft entities and concepts and to other adventure games and even TV shows, are aplenty. The voice acting is on point and delightful, especially Kitteh stealing the show whenever she talks. 8/10
Looking forward to the Sequel!

Follow our curator page: IndieGems if you like and want to see more reviews like this one.
Gibbous - A Cthulhu Adventure is a linear point & click game that takes you on a mostly-not-so-dark Lovecraftian adventure with what I would consider easy to moderate puzzles throughout. Where this game truly shines is the writing, the voice acting, the art, and the animation. It's amazing that this is developed primarily by a small team of three people. Here, you are looking at a really high quality indie project that has been put together with the touches of love and passion on the part of the developers.
Of course I only played in English and I understand that as an infant, this game has had a bit of difficulty with learning other languages. Unfortunately the developers paid for professional translators in multiple languages that yielded less-than-ideal results. I think everything will improve with time. These developers listen to their audience. During the first few days after release, people asked for the ability to turn on and off subtitles. Amid fixing a few errors, but mostly dealing with the translation fiasco, the developers pushed out the first update allowing players to control the subtitle displays.
With any story, especially linear ones like this, the character development is very important. You end up controlling at various times three different protagonist. You really get to know them and appreciate them individually. You are sometimes Buzz, a half-Romanian librarian with an everlasting 5 o'clock shadow; other times you play as Don, a hard-boiled detective with a dry humor who grows with the strange story; and finally, Kitteh is the final protagonist, a cat who not only knows how to read, but to speak as well through the events that occur in the beginning of the story.
There are many themes explored in this game, along with many literary and pop culture references that are thrown into the dialogue and the jokes. The writing, with its many many lines that must have taken forever to put together, never loses track and never wavers from its desired effect of continually pulling in the reader/audience. Add that to the atmosphere created by the instrumental recordings and you end up living the story and its events, despite the surrealistic nature of it all.
I have created an entire Let's Play series on YouTube of this game, I am linking the playlist here (as the game is very linear, you may find it useful should you be stuck on a puzzle, though I do have to say, be careful with spoilers):
First video:
Gameplay
Traditional point & click with a series of fairly straight forward puzzles.
Controls
Mouse is all you need, though the space bar on your keyboard might come in handy.
Graphics
The art in this game is just purely lovely to look at. And the animations are well-beyond what you would expect for such a small-team project.
Music
As noted, really well done with instrumental recordings for the appropriate sounds in each situation in the game.
Audience
Any Lovecraft fan would definitely enjoy this game very much. Do not expect too difficult puzzles, as everything does make sense and the hints are easily found. Even for someone who does not play a lot of point & click games with the expected puzzles, this game would be fairly fun and intuitive to progress through.
Pricing
You will have to decide whether or not $19.99 at baseline is worth it for you. For me, the adventure with the excellent art, music, and voice acting was more than enough to warrant the asking price. Of course, given its linear nature, you will likely not be replaying this game any time soon after completing the first time. Like any good book, there's always a good chance that you will go read it again. One run will take you anywhere from 8-10 hours likely. I was trying to click on all possible conversation dialogue choices for my Let's Play series, and it took me about 13 hours. (Included was a few moments of me being stumped on a puzzle or two.)
Positives
+Wonderful story and unique character development
+Excellent (well above-average) voice acting (despite a small crew)
+Really nice references embedded seamlessly
+Outstanding art design and animations
+Humor in different parts, employed through different types of jokes
+Very responsive and active developers trying to make sure that you have a good experience!
+Achievements for those of you who enjoy having them
Negatives
-Puzzles perhaps a little too easy mostly for the point & click veteran
-Just a personal note on the depiction of the gibbous moon, as the choice used is the waning gibbous, which is a little bit off from the plot development (I will just leave it at that to keep the review spoiler-free)
-Small bugs (nothing game breaking)
Conclusion
Gibbous - A Cthulhu Adventure is a linear point & click adventure, yes, but it has so much to offer in the various pieces that combine to make the game a whole. I had a lot of fun running through it, and I look forward to more games by this small group of developers. I do hope that they are no longer stuck in an attic though.
Overall rating 8/10.
I received the product for free. I did not receive any compensation to write this review. The opinions represented here are entirely my own and were not influenced in any way.

The voice acting and animation are uniquely good among adventure games. If you are the kind of person who was looking for a successor to Curse of Monkey Island, this is it.

Review based on playing the entire game
Gibbous is just kind of ... brilliant, and this review is coming from someone that is not a fan of cartoony games.
Beautiful graphics
Characters
Story
Tongue-in-cheekiness
Game length
Game consistency
No walk-through needed
Committed team that is keeping on top of any issues since the launch.
We are not huge fans of cartoony games but we've been following Gibbous - A Cthulhu Adventure and played it the day it was released.
We don’t always want to work out obscure puzzles every ten minutes; we don’t want to backtrack because we forgot to make note of something. We don’t always want to have 15 pages of notes or refer to screenshots. Sometimes we just want to play a game and not have to “work” hard at playing the game.
Gibbous provides that in a big way!
The references to classic games and developers is so funny we laughed out loud many times.
There are no "bang your head against the wall I'm so frustrated puzzles" because every piece of information you need to solve puzzles is provided in the game.
You can review where you are and what you need to do if you can’t play for a few days and forget what you goal is.
You can right click to speed read conversations, double click to walk a bit faster or double click the arrows to “teleport”. If you can’t find something and need a nudge you have the space-bar to help you out.
The game automatically saves, or you can save manually. We like having both options available.
A quick right click on the inventory gives a good description of the item, and what the item might be used for.
The game ran seamlessly, and we suffered no crashes, despite much alt+tabbing to Discord, other running programs.
We feel they designed the game with players needs in mind; this game is fair to the player.
Our play time was about 11-12 hours.
Great job Stuck in the Attic!