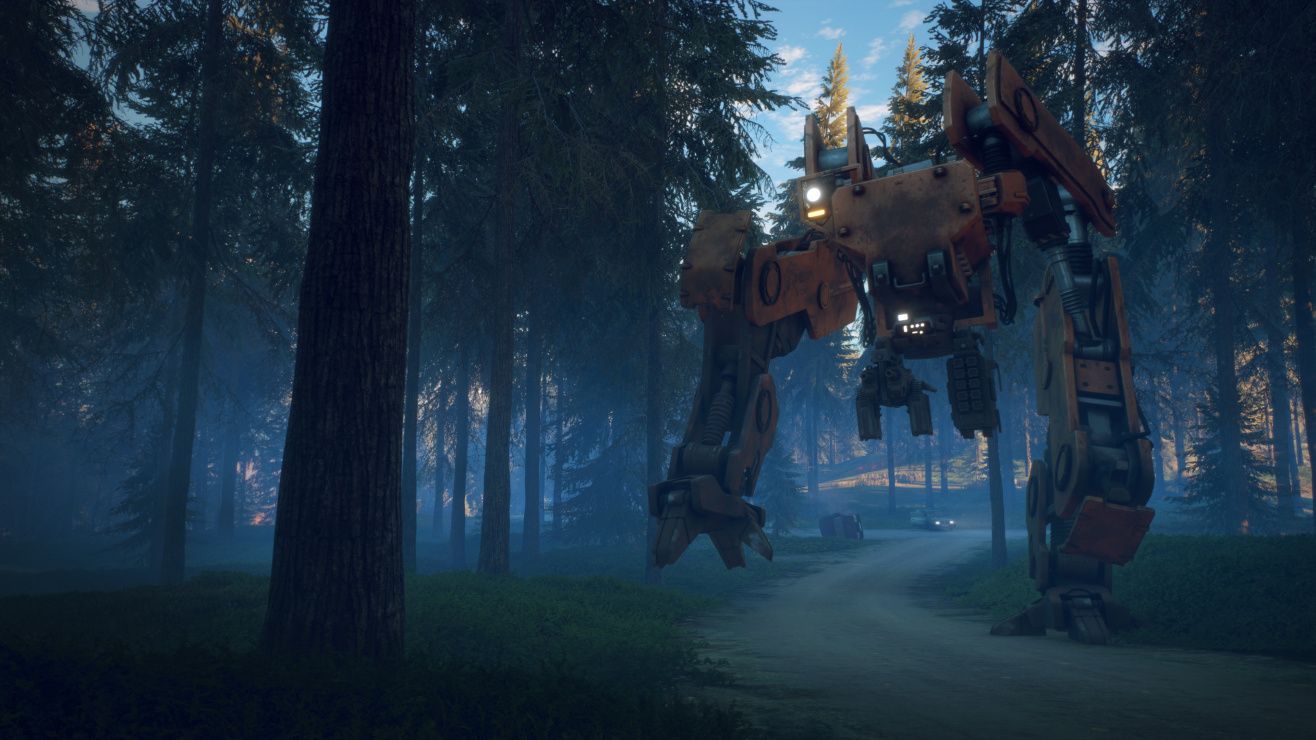 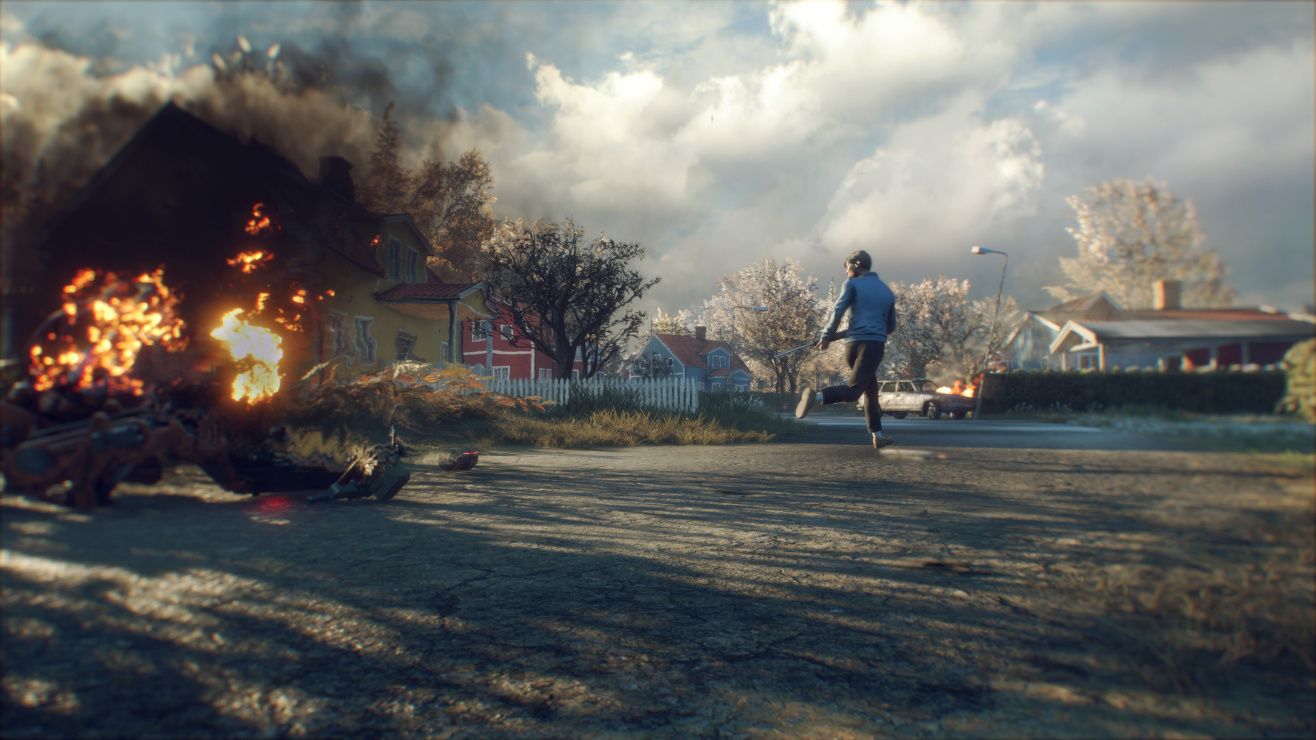 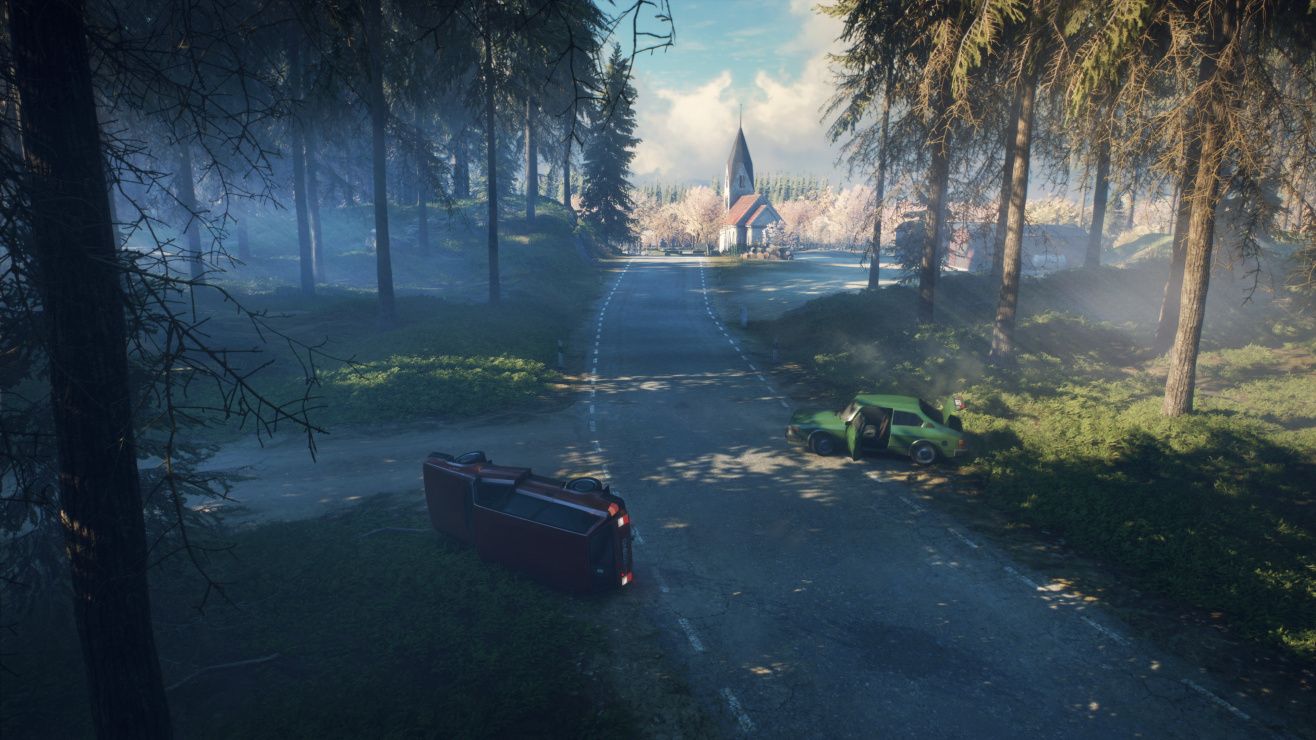 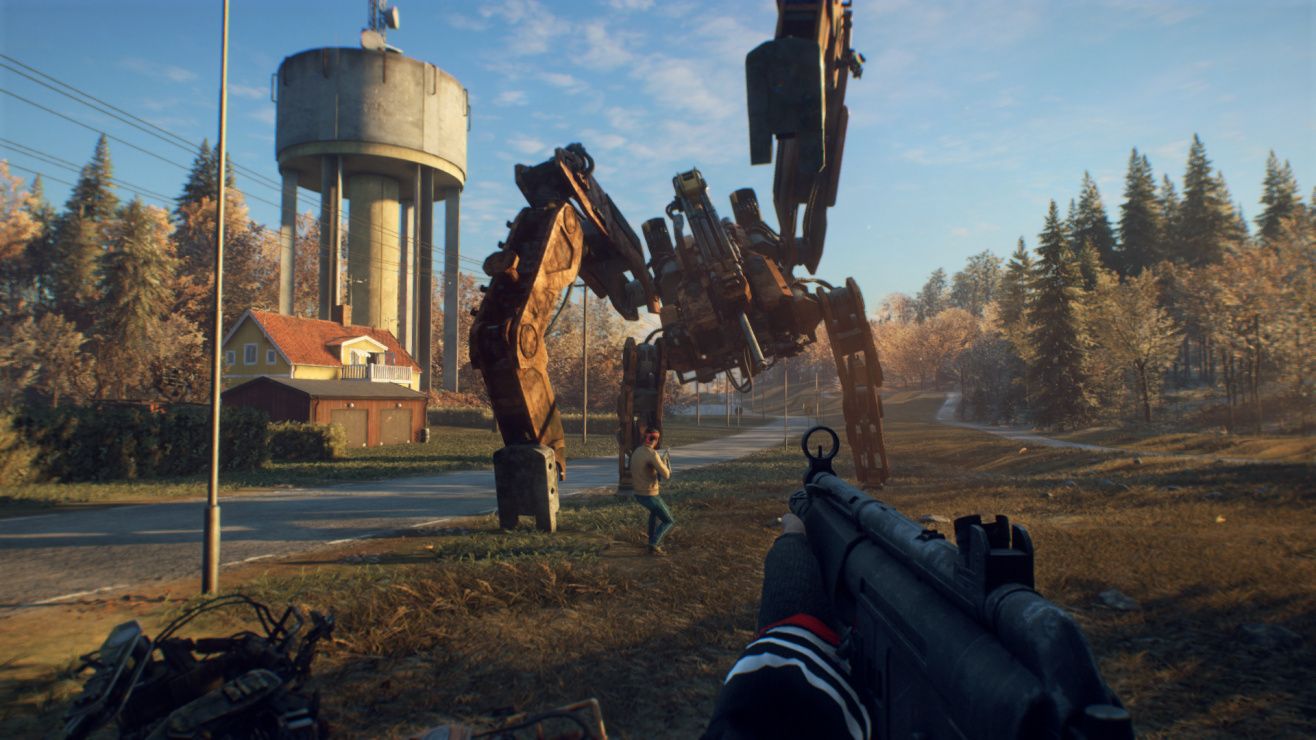 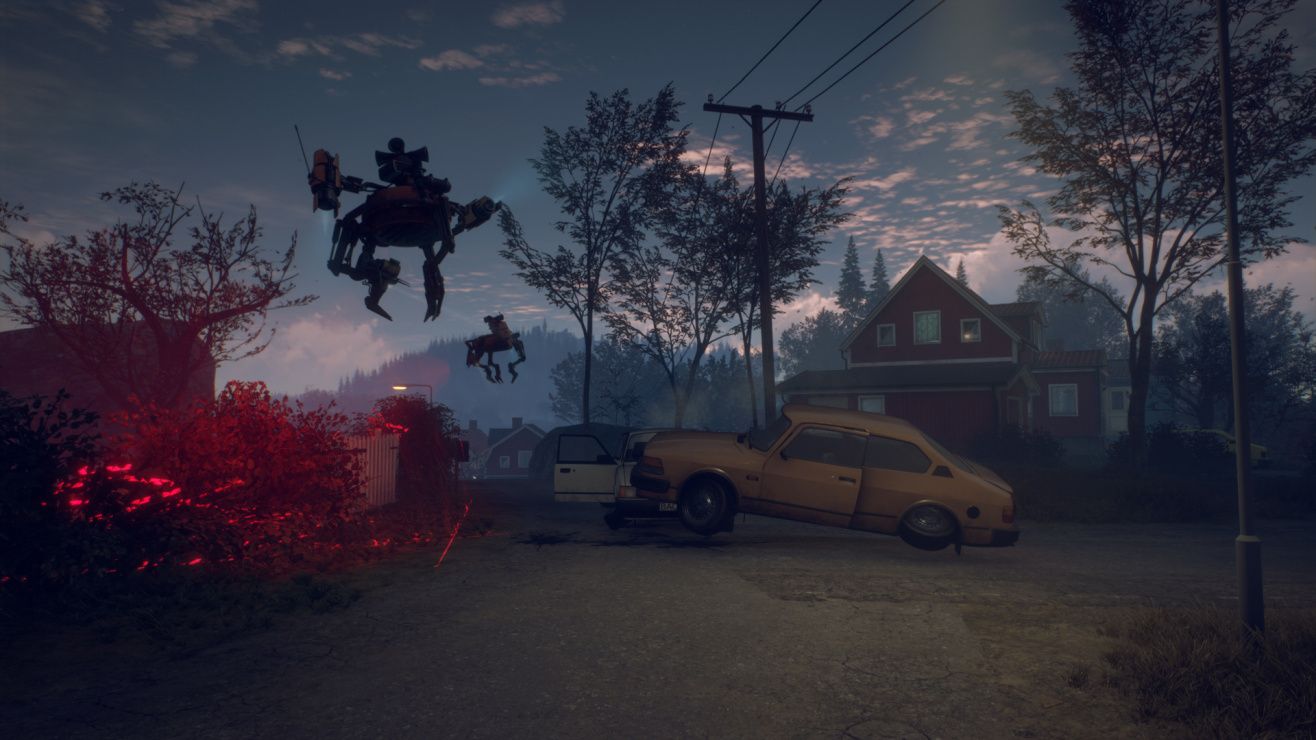 action adventure multiplayer robots sci-fi shooter survival
Experience an explosive game of cat and mouse set in a vast open world. In this reimagining of 1980’s Sweden, hostile machines have invaded the serene countryside, and you need to fight back while unraveling the mystery of what is really going on. By utilizing battle tested guerilla tactics, you’ll be able to lure, cripple, or destroy enemies in intense, creative sandbox skirmishes. Go it alone, or team-up with up to three of your friends in seamless co-op multiplayer. Collaborate and combine your unique skills to take down enemies, support downed friends by reviving them, and share the loot after an enemy is defeated. All enemies are persistently simulated in the world, and roam the landscape with intent and purpose. When you manage to destroy a specific enemy component, be it armor, weapons or sensory equipment, the damage is permanent. Enemies will bear those scars until you face them again, whether that is minutes, hours or weeks later.
Share Share Share
Promote for 50G

I love it. I don't care if it isn't perfect (and it's not, yet). It is not a shoot-em-up. Forget it, it isn't. It's an experience. I'm an ex-Royal Marine, and I can lose myself in it completely. The right rules generally apply, and strange things like a machine sticking its sword through the wall into me, I can forgive, while wryly thinking that given a wooden ship-lap house, a machine probably could. They'll fix that, and other stuff.
It is slow and immersive (at least how I play it), you use the rain, you sometime wait for night, the rules of cover-from-view/cover-from-sight actually apply. I never use roads for instance, unless I am ambushing something, and I cross at a run into cover the other side.
If you want action-action-action, buy Doom.
This is brilliant.
I've read some of the other reviews, and grinned. I understand that they want big rewards, but what rewards would there be? You are living in a deserted world, being hunted and trying to find out why. I turned the hints off - I didn't want to be told. I didn't use the hud, except as a compass - I looked, and found all the same things. Slower, but I found them. I found them because they were where they would be. As for me, I like space between excitements. I like creeping up on things and destroying them. Occasionally, I like to be besieged in a Church by ten Runners, four Hunters and two Tanks and walking away alive at the end.
I just love it.

Played this multiplayer only, with a keyboard and mouse.
I can see why this wouldn't be enjoyable for single player however multiplayer was actually, really good fun. I had the music off throughout (although its also very good) and turned off nameplates to make it more immersive and actually, this also made the game a lot more fun.
Bad :
There are bugs there is no getting away from it. what i found is if you press ESC while in a container it stops you from going back in if you need to clear your bag (can be a pain, especially if there is good loot in there - work around it just to pres the cancel button). my game probably crashed twice or three times over a 19 hour period.
Missions are repetitive and very fallout 76. when you arrive at the area it is, pick up a note or destroy some robots etc. and there isn't really any deviation.
Inventory management is annoying but not unbearable. Different ammo "types" for each "type" of ammunition also took a while to get used to and i'm sure it makes a difference but i really had no idea tbh. There are weird stack limits, some med kits stack to 20 and the next level up only stacks to 10 so actually i didn't know if it was worth it that much.
Some of the Skill benefits should of been standard abilities or more inclusive. you need a skill to spot robots, one of the skills lets you see the components on them but for me however, this only worked for one type of robot.
And Despite the above, i still enjoyed the below.
Good :
Game is very pretty. Weather system is also very very nice with the snow as an example. And there are light rays that actually work. fighting Tanks at night is also great because of the lighting effects.
Sounds are great. Good gun sounds, robot sounds and the music is awesome.
You can be swarmed by enemies that make you hide in containers or buildings for cover. makes the game intense and in multiplayer very good fun. making your approaches tactical and you prioritise enemies.
Huge map, to get around it you get Bicycles which is quite comedic, also unusable if you aren't on a road and if you have the perk you can out run them. if you sprint into one while someone is riding it they fall off, providing endless entertainment.
Ammunition can be scarce if you pick fights you cannot win or don't have the perk to increase the amount you collect.
the fast travel system works... kind of. you can fast travel to safe houses which is great, however also you have to place down beacons, which run out after x uses, or additionally if you exit the game which was annoying. personally, its a pretty game and the encounters are fun so this didn't bother me at all.
Summary,
It is not a £30 game. This is a solid £20 game if you play multiplayer. This game i don't think is really aimed at being for single player and if it is it doesn't do it well. If you could mod the crap out of it, it would be awesome.
The game doesn't live up to the concept, the concept could be truly awesome but the game play i still found to be very good fun.

I know GZ has got some issues and yes they can be very frustrating but when it works its very good.
Open world , you plan what , when and how you want to do so one minute its all stealth , then you are in a ruckus with 8 hunters ( and yes I got them all).
Its worth the money , its not a rip off .
I only really like single player games and this suits on PC for me.
I'm a 58 year old retired plodder really but it really does get the grey matter turning over.
Its not for everyone but I for one , am totally fed up with BF and COD.

Just bought it. Played it. LOVE IT!!!
I'm only doing this in single player. I'm not really an online gamer, but maybe if I can find time and meet someone worth playing this game online with, that would be something I'm willing to try. I held off from buying this due to bad reviews, but someone on YouTube said that most of everything is fixed for early 2020. So I bought it.
Glad I did.