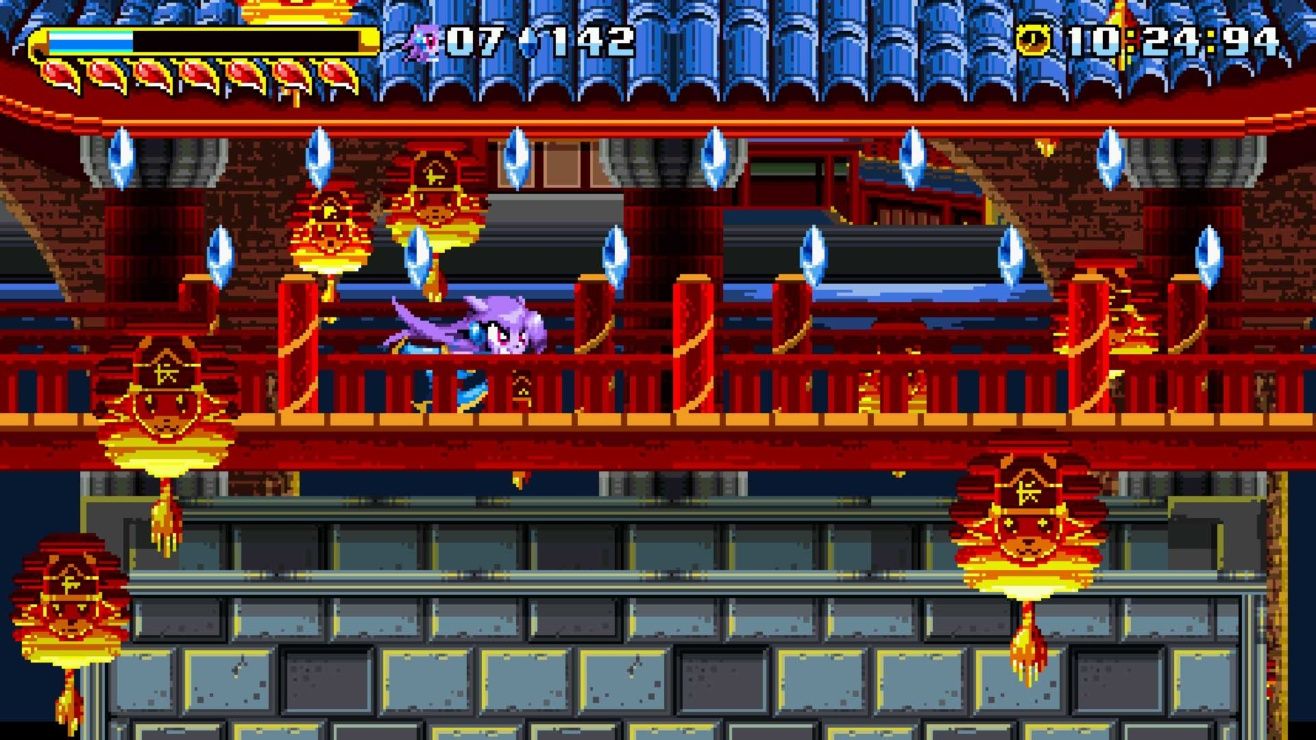 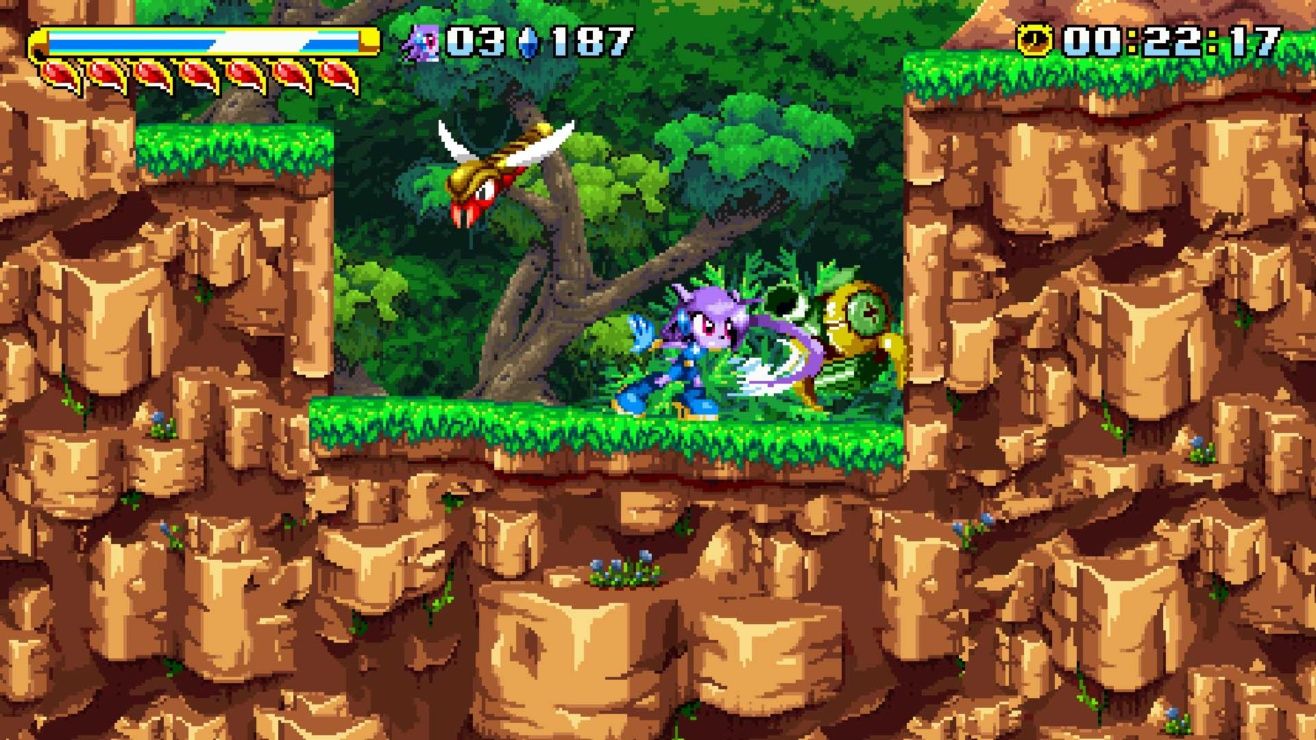 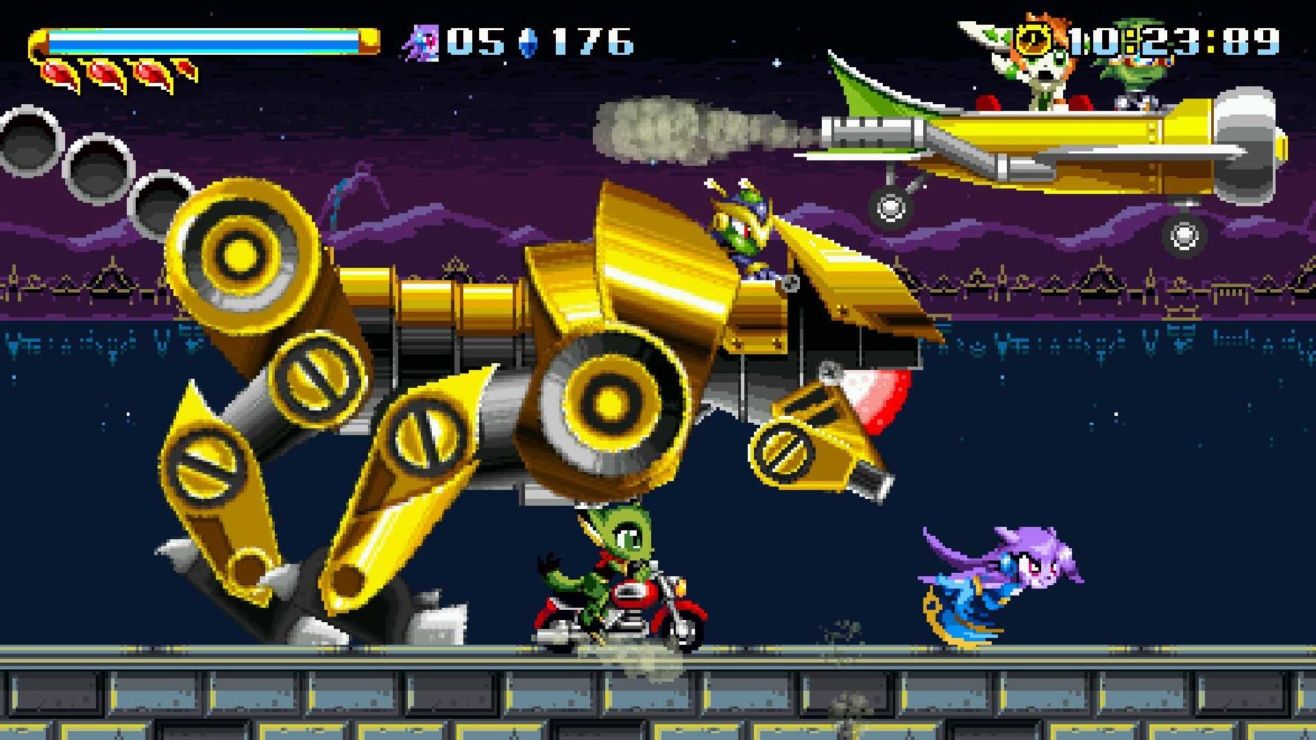 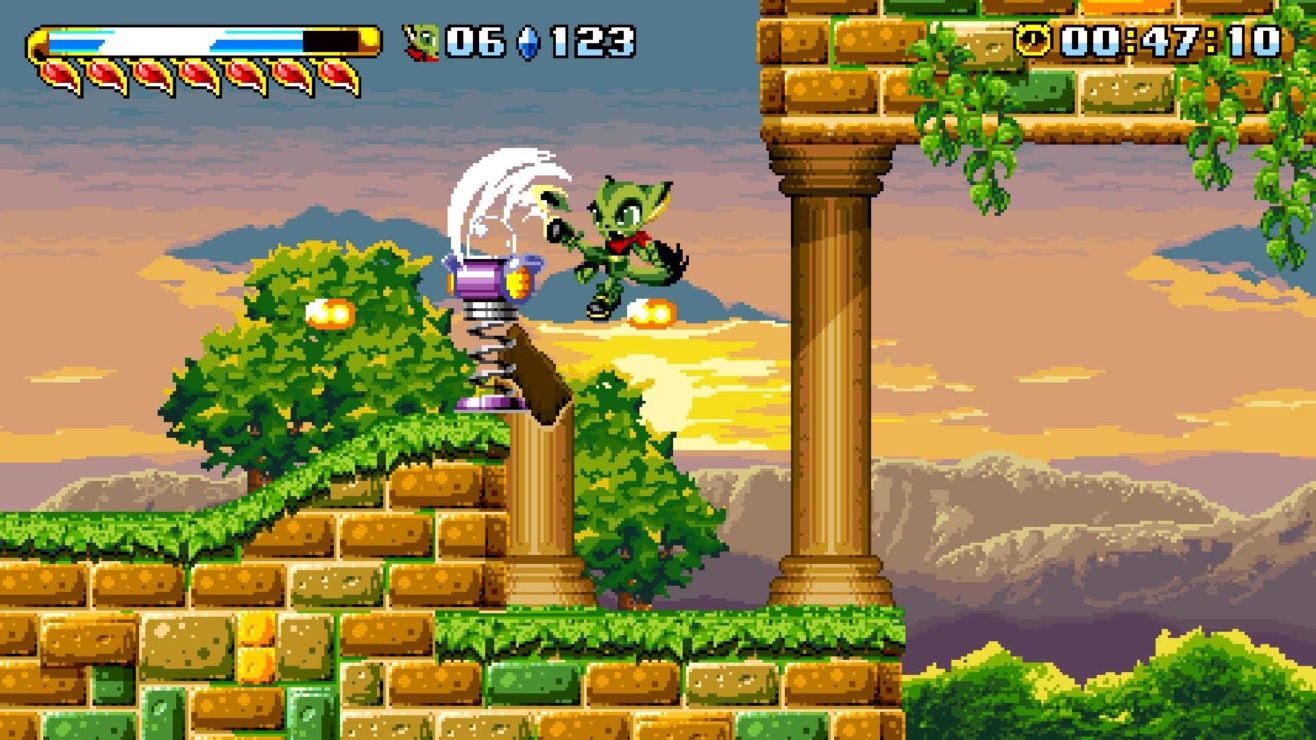 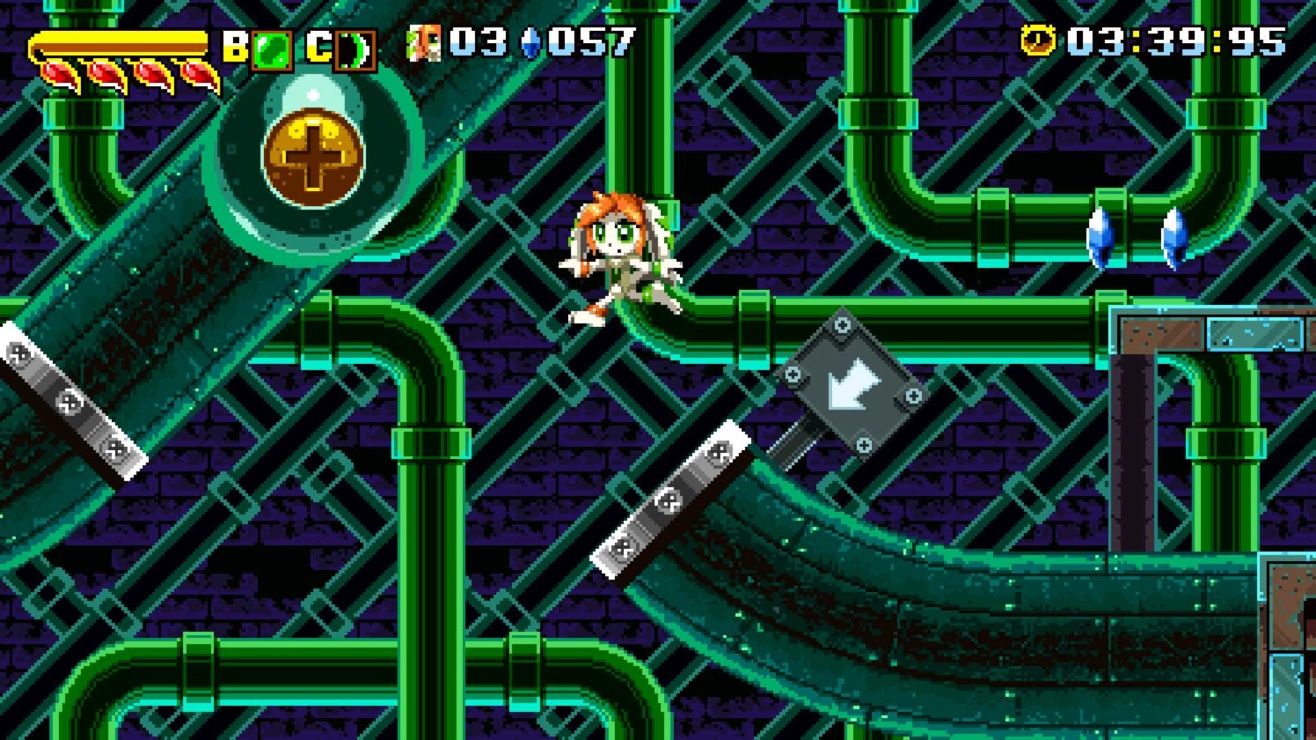 2d action adventure anime indie pixel platformer retro
Fight your way across the celestial world of Avalice where cats are green, motorcycles drive up walls and monster girls do most of the buttkicking! Freedom Planet is a cartoony, combat-based platform adventure that pits a spunky dragonoid and her friends against an alien attack force.
Share Share Share
Promote for 50G

200 character summary
Freedom Planet is an amazing action platformer with beautiful graphics, It has a fully voiced story mode and 3 playable characters. I think Sonic like would be the best description for this game.
Story & Characters 9/10
The story mostly plays out on planet Avalice, All energy in this world is supplied by the Kingdom Stone, there are 3 Kingdoms who all want control over the only source of energy. On top of that the planet is being invaded by an alien race who are also out for the Kingdom stone. When kingdoms fight eachother it is up to a select few people to save the world. The story is fully voiced and plays out in scripted scenes. I like the story, It is not perfect, And it is obvious some things where tought of later in the game. But I certainly enjoyed it.
The characters are just amazing, we have Sash Lilac the Dragon Girl, She is the main protagonist, She is a tough one who cares for her friends but also carries a lot of hate. Then we have Carol Tea the Wildcat with her climbing motorcycle, It literally can climb ladders. She is a a real tomboy who lives together with Sash in her treehouse, They have been friends for a long time. Lastly we have Milla Basset the Dog and she appearantly talks to treestumps, She is very lonely but also very cheerful and caring on the other hand. There are lots more characters but the rest of them are not playable, Still they all have a voice, different personalities, and very nice sprites.
Gamemodes & Gameplay 9/10
There are only 3 gamemodes, We have Adventure mode, Here you play the story of one of the 3 characters, The levels and order are mostly the same, but some levels are only occuring with certain characters. Arcade mode, which is practically the same without the cutscenes. Then we have a Time Attack mode, Here you can practice your levels or set records, You need to complete each characters Adventure mode before you unlock all their time trials. There are also 4 difficulity levels and infinite continues so anyone can complete the game.
It started out as a Sonic fan game which is still kind of obvious, You can see the resemblence in almost everything, Which is certainly not a bad thing, The ring system has been replaced with a health bar, You can fill it back up by collecting leaves, or by standing still in easy mode The game offers a lot of challenges like collecting the most crystals or set the fastest times, Instead of the computer screens you break big crystals and they give you the sonic like protection like a bubble, fireshield, coin magnet. The Launchers, bridges, loop de loops, Everything else is still there. The final boss also sounds very much like Dr Robotnik, or Eggman, however you want to call him.
The Gameplay differs with each character, Lilac is the speed focussed character, But she has a big moveset compared to the blue hedgehog, She can punch, kick and slash people with her hair, She also has a dragon boost which will make her go fast and damage enemies She also has a cyclone attack where she slowly descends, spinning like a helicopter. Carol has a pretty weak moveset, but she can gain a motorcycle from gas canisters all around the levels, Then she becomes a bit overpowered, which makes it a nice balance. Milla can fly like tails, only not high at all, She can also spawn strange green cubes and a shield, or combine them for a stronger attack, Millas gameplay feels much slower than the other 2.
On top of all that you also get a gallery, and by finding collectables in the game you unlock artwork, tunes to listen and even voiced catchphrases. The game has some great artwork so it is defenitely worth your trouble.
Graphics & Soundtrack 9/10
The graphics look amazing, It is a true Sonic game, Every level has a very unique look and style with different enemies and props, Even different things that help you navigate the worlds, just like in the Sonic games. Everything is drawn very nicely, From the backgrounds to the multiple parallax layers, but especially the characters, enemies and effects. The animations are also pretty nice. With all that in mind Soundtrack is even better, it is filled with great sega style tunes. It creates a very nice atmosphere that reminds me of my Mega Drive.
Performance & Support 8/10
The game runs great, Sadly the game is locked to 60fps, uncapping it would be better, But it is not a major issue, I had absolutely no drops below 60, It runs rock solid and has no loading times.
Endgame & Replayability 8/10
It offers a bit of replay value, To complete the gallery you need to find all collectables for all achievements you need to complete the entire game without deaths, again within a certain time limit, Every level has a time limit, And ofcourse you can play the game with 3 different characters. It is certainly more than what I expected from the game, Still a boss rush would have been nice.
Conclusion 9/10
It is a great game to at least finish 3 times, once with each character that is, if you really like Sonic games you will get a lot more time out of this game, It is rather old, but it is almost a classic. It is a well praised game and not without reason, If you like platformers you should at least give it a chance.
Follow my Curator Page for more Reviews like these
Game Info
# of players
Single Player Only
Steam Cloud Save
Working fine
Controller Support
Yes, Xbox One Bluetooth Working
Achievements
Doable
FPS on Ultra 1080P
Locked to 60
Ram Usage
400MB
Installed Size
400MB
Launch Command
gamemoderun %command%
Issues
None
Operating System & Hardware
OS
Arch Linux
Kernel
5.5.6
DE
Gnome 3.34.4
CPU
Intel I7-6800K Hexa Core @ 4.2 Ghz
GPU
Nvidia Geforce GTX 1080 (Nvidia 440.59 Drivers)

If you're a fan of Sonic the Hedgehog games, then I can almost promise you that you'll be a fan of Freedom Planet in a matter of minutes.

This game somehow manages to combine the speed of Sonic games with the tightnes of the controlls from Mega Man and combines that with very well designed levels, amazing music, gorgeous and creative visuals and extremely exciting boss fights to create one of the greatest 2D action platformers ever made.
This game is a must play.

This is a solid 9/10. The game's visuals, scaling, and performance are all flawless. The soundtrack is phenomenal. Story is pretty impressive given the length of about 6 hours. The only place where I will deduct points is gameplay. The devs nailed the physics and movement but there are some parts of the game, notably later boss fights, that are a massive difficulty spike out of nowhere or just aren't fun at all. Not to mention, that sometimes there's just so many enemies that it becomes hard to see what to do and the game becomes a Sega Genesis bullet hell. For the next game, I would love to see some better bosses and a more consistent upward trend in difficulty. All in all, definitely worth the money and a must buy for fans of the Sonic series or other early Sega exclusive platformer titles.

Beating Sonic At His Own Game or How The Sonic Team Failed So Often That Fans Gave Up And Did It Themselves:
Sonic The Hedgehog was a very important and iconic game of the 90's. It was arguably the first game to introduce "twitch play", a style of gaming involving accuracy and timing at high speeds, and it also pushed the limits of platforming and side-scrolling level design by encouraging speed instead of hindering it. I'm not sure if "Speed Running" would be as much of a concept as it is today without Sonic The Hedgehog.
After the first three games on the Sega Genesis, Sonic began his long decline. While other platformers evolved and flourished, The Sonic Team seemed to have no idea what to do with their creation. Sonic blundered into 3D with the rest of his peers and a string of games that had more misses than hits padded out the series after the death of Sega's Console Division, until Sonic became something of a joke in the gaming community.
This is not a Sonic game. While the Sonic series languished in the dumpster, fans of the series pined hard for a return to the old days of clever level design that facilitated precision and speed in gameplay. One fan took it upon himself to learn game design and create a spiritual successor that would "pick up where classic Sonic left off" and create the kind of sequel that should have been. That successor is Freedom Planet, a game that takes what Sonic started back in his Genesis days and expands on it in every direction.
The game and its level design caters both to precision twitch gamers with speed that matches those of the original Sonic games, while also catering to more careful and deliberate playing styles, offering a choice of three characters that play radically differently from each other while also being capable of being used in both those play archetypes. Animation is expressive and excellent, calling back to the old Sonic series while also forging its own identity, managing to take the old style of Sonic gaming and do brand new things with it. It is the archetypical spiritual successor, and should serve as a case study for those who are trying to build upon an established franchise.
In fact, the game is so polished that there are really only two things that give it away as a fan game- the corny writing and terrible cringey voice acting. Both of these things give the game a kind of odd charm rather than detracting from it too much though, and the great gameplay is enough that I can turn the other cheek.
This game was Sonic done right; the absolute pinnacle jewel of fan games that took matters into their own hands. Perhaps the Sonic Team was paying attention because it was shortly after this game's release that Sonic entered into his current modern renaissance with Generations and Mania, which were both excellent throwbacks to oldschool Sonic. Mania was even done in collaboration with select fans in the modding and fan-game community, which is about as direct as inspiration gets in the games industry.