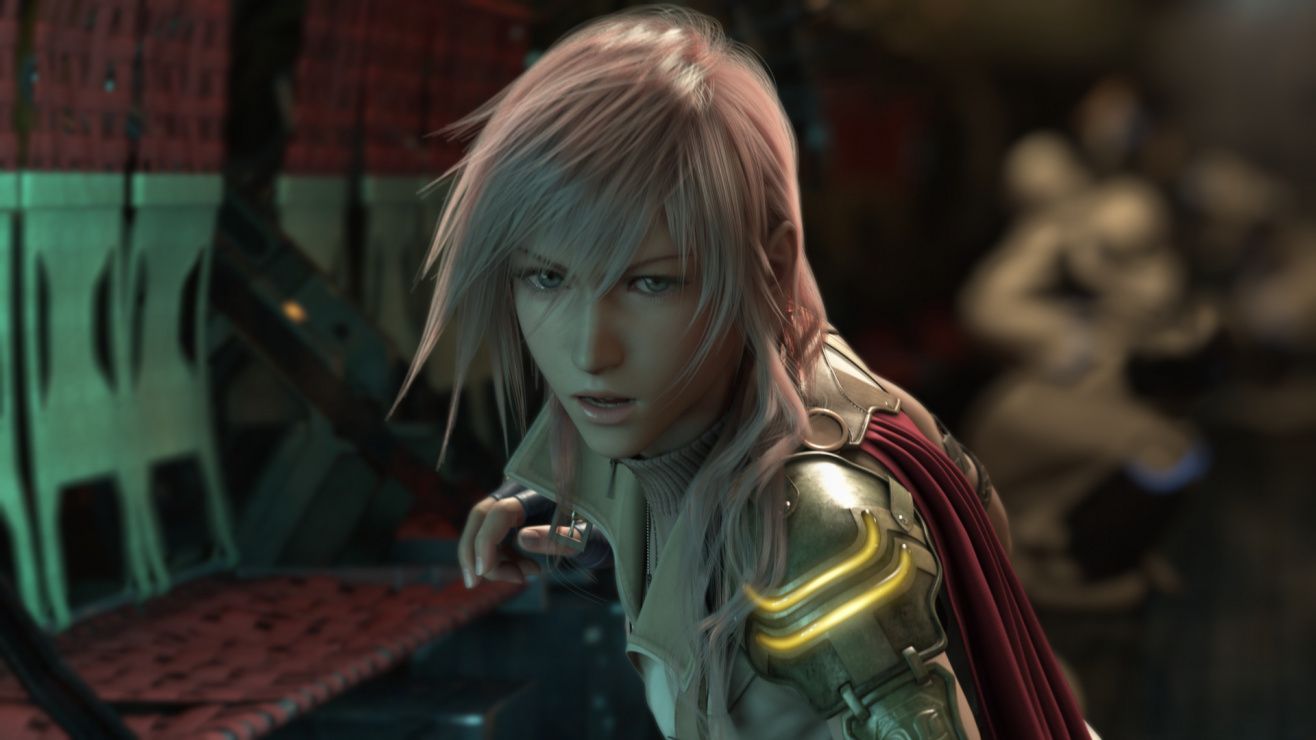 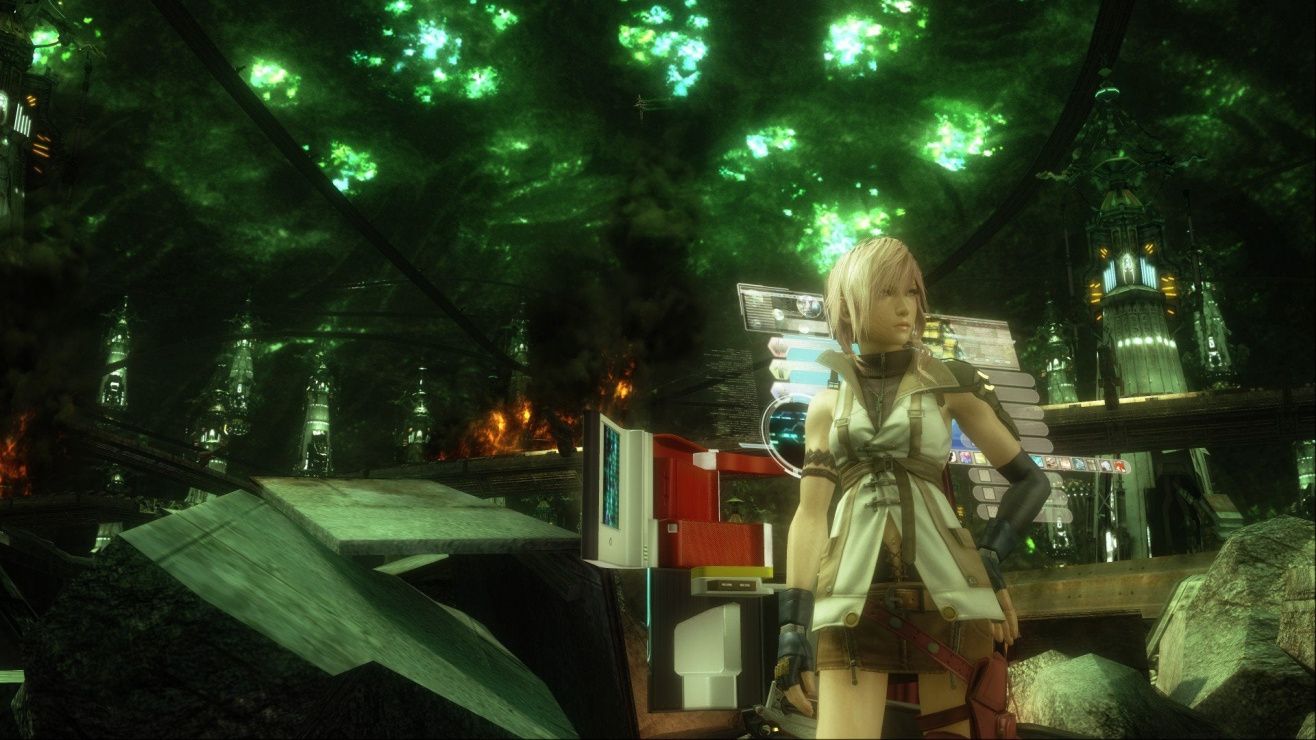 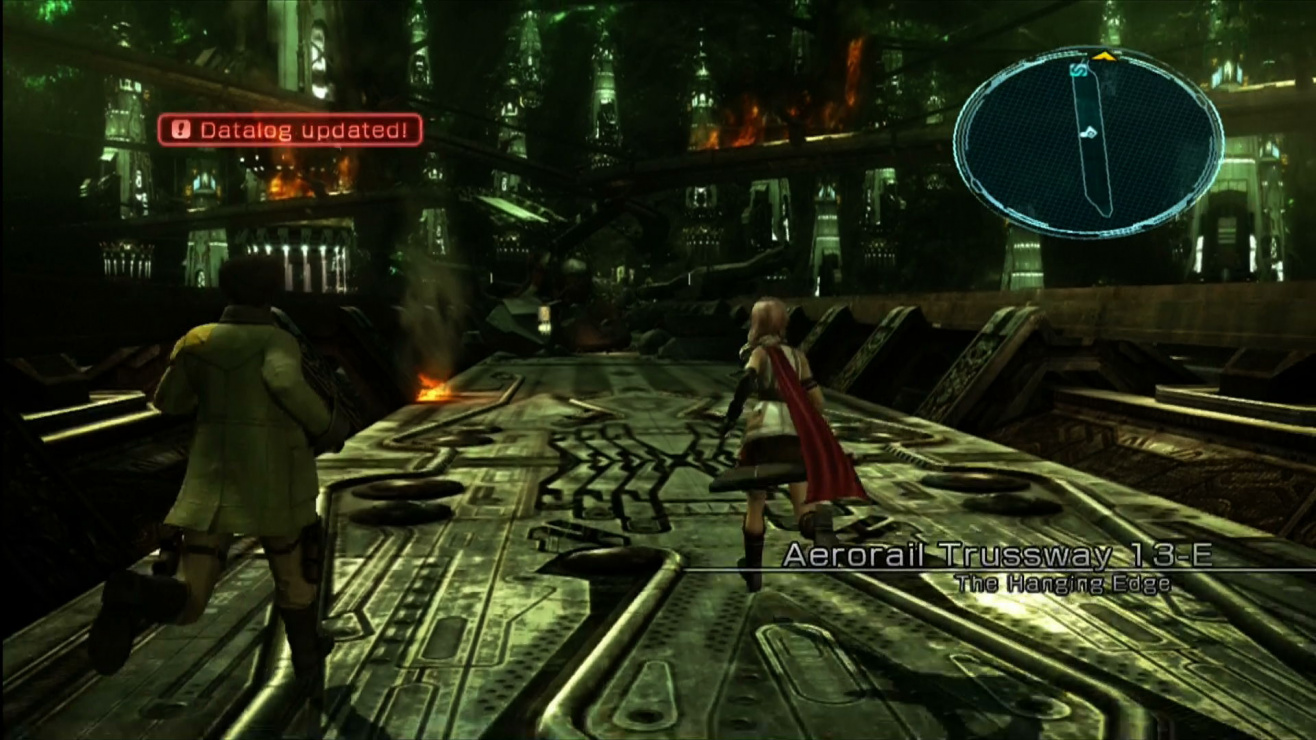 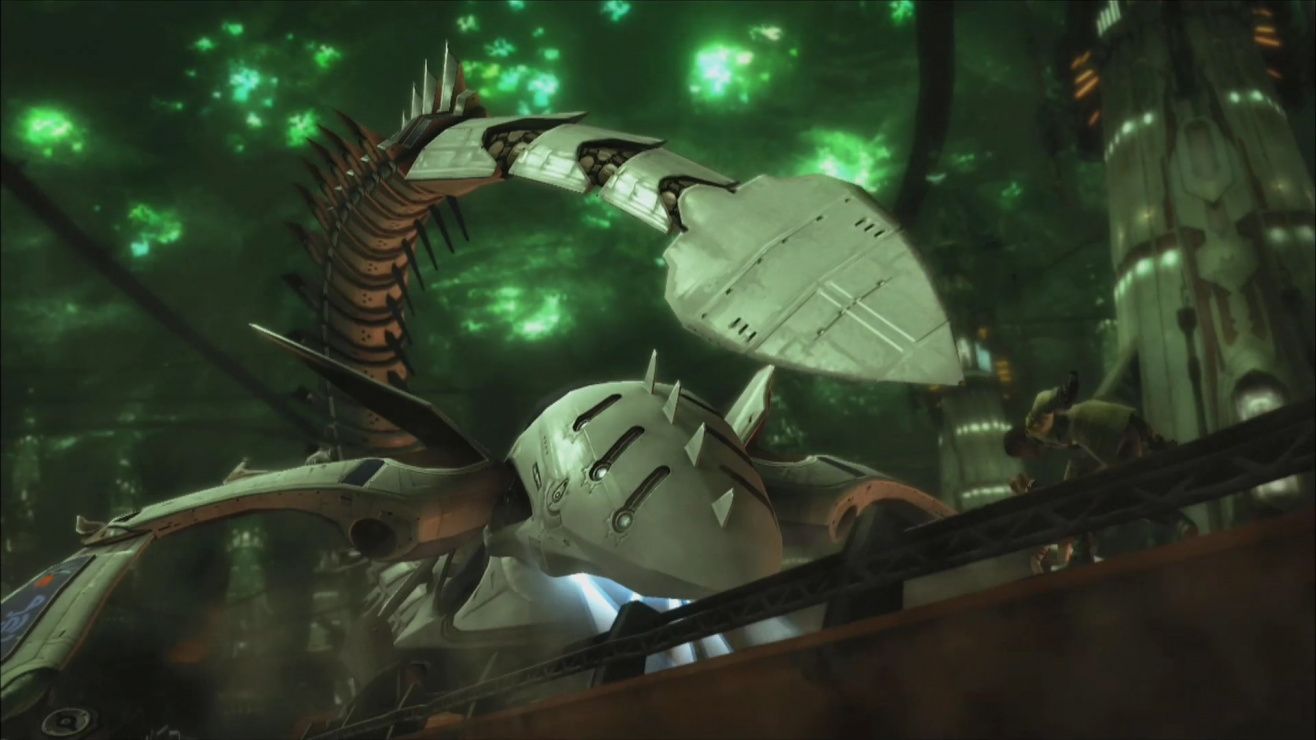 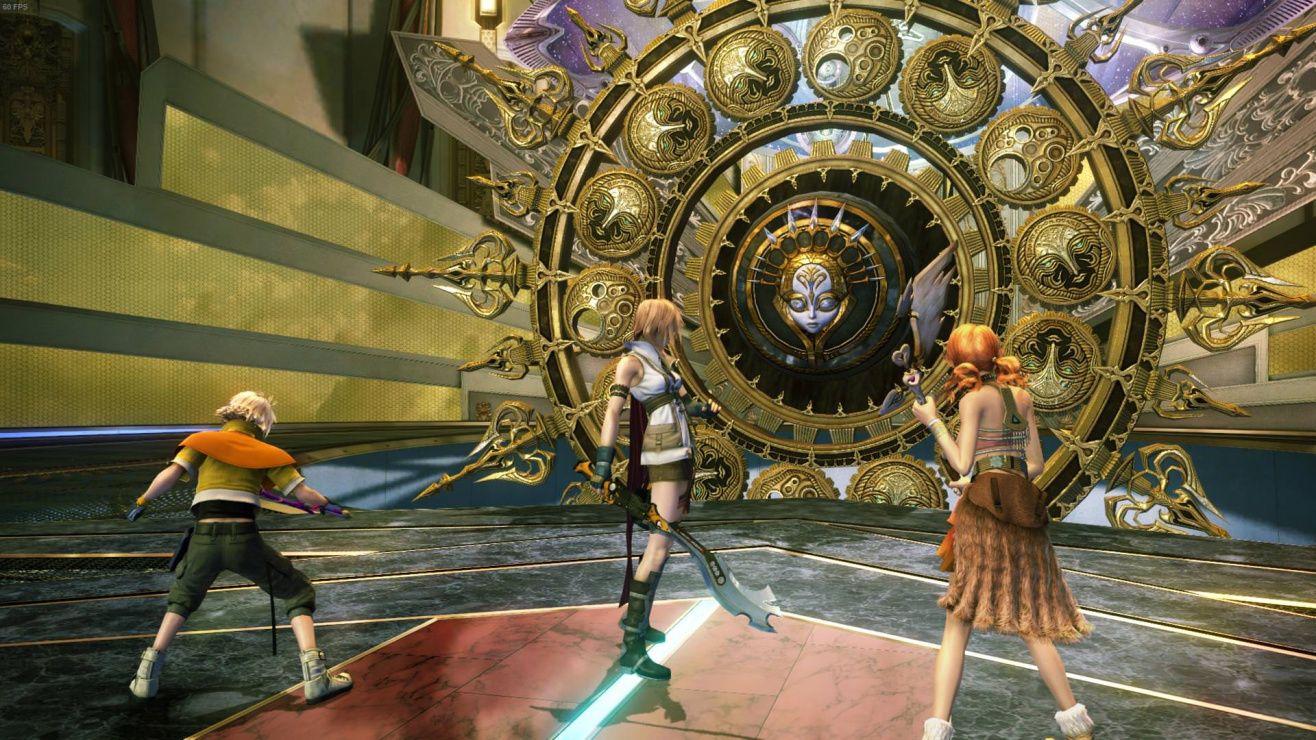 PC Steam Console action Xbox adventure rpg story fantasy role-playing open world
DO YOU HAVE THE COURAGE TO FACE YOUR DESTINY? As a deepening crisis threatens to plunge the floating world of Cocoon into chaos, a band of unsuspecting strangers find themselves branded enemies of the state. With the panicking population baying for their blood, and the military all too happy to oblige, they have no choice but to run for their lives. Join them on a desperate quest to challenge the forces controlling their fate, and prevent untold destruction. Featuring an unforgettable storyline, a battle system blending action and strategy, cutting-edge visuals and awe-inspiring cinematic sequences, FINAL FANTASY® XIII delivers the next step in the evolution of gaming.
Share Share Share
Promote for 50G

Alright, 2021, first time playing this game. People told me many bad things about it, here's what I experienced:
Characters
Lightning: People told me she has no development and is monotone. Not true. I'm at chapter 6 and she is learning the power of teamwork and friendship.
Snow: He is just Naruto with a different appearance.
Hope: Angry teenage anime boy. Ayaya!
Vanille: Strong reason not to play this game with english voice acting. Standard anime girl with speech impediment. Ayaya!
Sazh: Strong reason to play this game with english voice acting. He is the comic relief character, but does not sound or look like an idiot (see: Steiner from FFIX). Has good character development. Certainly the best character in the game. I also make breakfast while I listen to his theme.
Fang: 15 hours into the game and she still hasn't joined the party, but first impressions are good. Strong Beatrix (FF9) vibes.
Level design boils down to corridors
True, literally corridor after corridor fighting 3 or 4 types of enemies. Feels like a PS1 game.
Combat sucks
I think it's pretty good. You give commands directly only to the party leader, which I'm assuming you can change to whoever you want at some point in the game. Right now, up to chapter 6, your party gets chosen for you.
Every character has 3 different roles, similar to a job system. You can change these roles midway through the battle (this is the Paradigm system), so there's some variety to play style. You can stagger enemies by performing combos, and for some enemies doing so will require you to change roles frequently during a battle, so even though you're only giving commands to a single character, there's quite a lot to worry about. Battles are more dynamic.
What absolutely annoys the shit out of me, is that every time the party changes, your preset paradigms change to some default garbage. You can have 6 preset paradigms. Sometimes, you will get a new party and the game will throw you right into a battle. Usually these are the battles I lose at least one time, because I have no time to check my characters' equipment and formations. So be prepared for a lot of menuing.
And the AI is kinda dumb sometimes.
Eidolon battles are... weird. Timed battles where you fill a stagger bar and then you get to ride the Eidolon. I was shocked, but the visuals and design are honestly pretty cool. Risky creative decision, in my opinion, it paid off, even if it looks a little silly. Mechanically speaking, I have no idea what to make of it. I just spam attacks until the stagger bar fills, even though the game tells me that there are certain actions that speed up the battle. No idea what that means.
Progression system is linear!
It's... linear. Every character's role has a different "role tree" that is layered. It starts on level 1 and progressively through the game you unlock more levels. Each level has a bunch of stuff you can level up, such as base stats (strength, magic and HP), active abilities, passive abilities, extra accessory slots and so on.
That sounds okay, like a standard job tree, but it's not. Remember how I said it's linear? Yeah, the trees BARELY branch out. You will usually have a linear path, with one branch along the way that leads nowhere. It's barely a system, really.
You can upgrade equipment, which absolutely breaks the game. I realized soon in the game that I can just sell all my items, such as Phoenix Downs and Potions, and buy upgrade components. Then I upgrade my items and create a super soldier that mows down everything in it's path.
Also, the game is really disrespectful when it explains the upgrade system. It tells you that certain components will give EXP boosts, while others will reduce the EXP boost. Then, it encourages you to experiment with the components. Sounds good, except that is a dogshit explanation. I sat there thinking "maybe claw components are good for the claw weapons... magic dust, for magical accessories... hmm"
The reality is that there's two kind of components: organic and non-organic. Organic adds to the boost, non-organic deducts from the boost. That's it. It's a shit system that tries to fool you into thinking there's more to it than there really is.
Story
It's a JRPG and it's Final Fantasy. You know the drill. Characters facing personal dilemmas, crazy religion trying to take over the world, catastrophic events, genocide, all the usual stuff.
Verdict
It's worth playing. It's not a masterpiece, but I think it's a good game. Some good ideas that could have been executed better, but it has a different feel than other JRPGs, so that alone makes it worth playing, in my opinion.
The world design is pretty cool too, and I really like what they did with the Eidolons; it's honestly the best part of the world so far.

Modder to the rescue. 10/10 with HD Project Mod
Oh and don't forget for performance patch :D

throwback to tiny baby me who tried playing this and never finished. I gotchu, i can do this pal. Be proud of me.

Did this game back then on 360 ; had hundred of hours on it.
At first the game seemed pretty boring, didn't liked the fact i can't do whatev i want and run around in the world map, until i reached pulse, the game let you way much more do what you want.
I still don't like Snow and Lightning in this opus (they are way better in the two others in my opinion), but always happy to redo this story.
- I sometimes have some fps drops there and there but nothing too much ; Some mods are pretty good too.

Final Fantasy XIII is the single most divisive game in the main series often finding itself near the bottom of worst/best lists, despite this FF13 has avid fans and frankly there is good reason for that.
The story, while confusing to start with, is still solid and has some great character development by the end. You can get easily get attached to the cast, and for me personally Sazh is one of my favourite Final Fantasy characters period.
The battle system is amongst the best in the entire franchise, you'd be forgiven for missing this at first glance. It's systems are fine-tuned and well balanced, with a enough complexity to keep interest. Don't be fooled by the auto-battle command, switching paradigms is the core of this system, as are the 6 roles (3 to start) that each character has access to. Effective use of the equipment levelling and upgrading system is also essential for reaching 5 star battle results in the Fal'Cie stone missions (especially Vercingetorix).
As for the common complaints:
Yes the game is linear (which is only true if you want to completely ignore Gran Pulse) but other games in the franchise are also linear (AY, 10, very easy to argue others as well) and the linearity is by no means a valid criticism of the title.
If you're still complaining about the performance in 2020 you either can't read (the thousand messages telling you to use FF13Fix) or your computer is from 2001.
Game is good y'all.