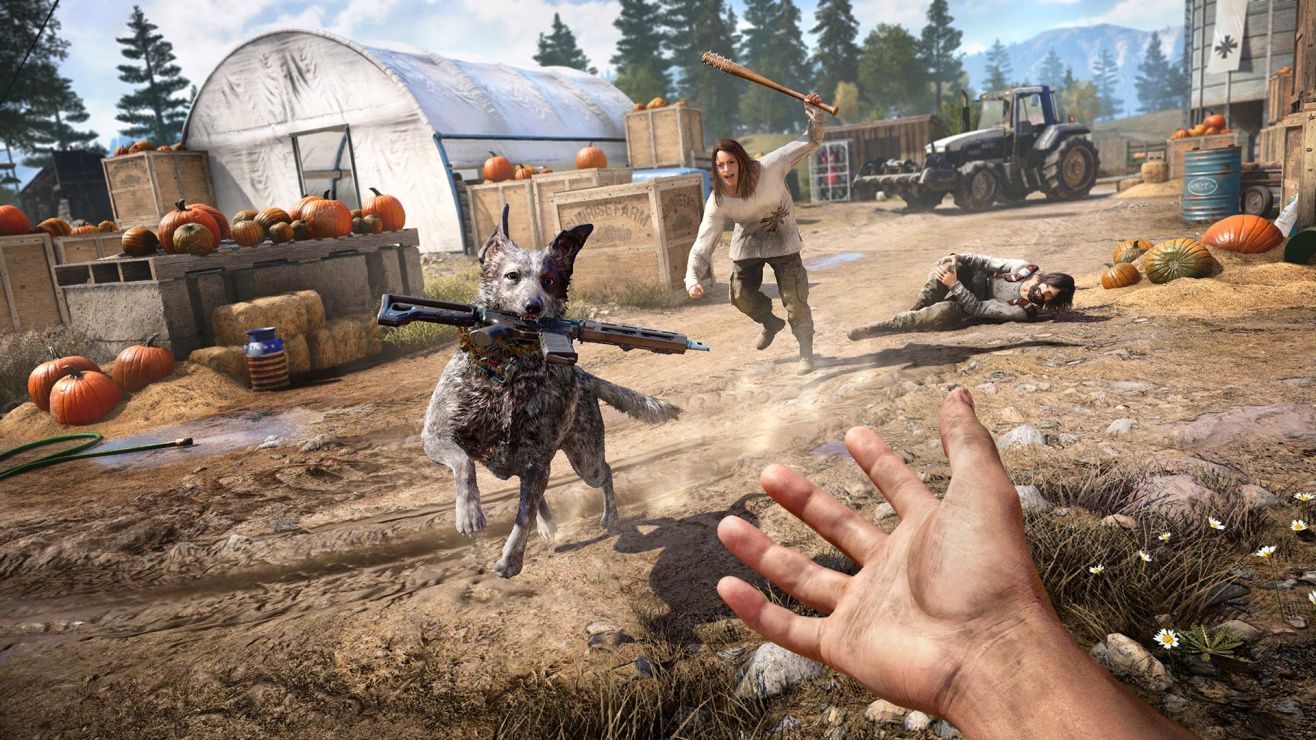 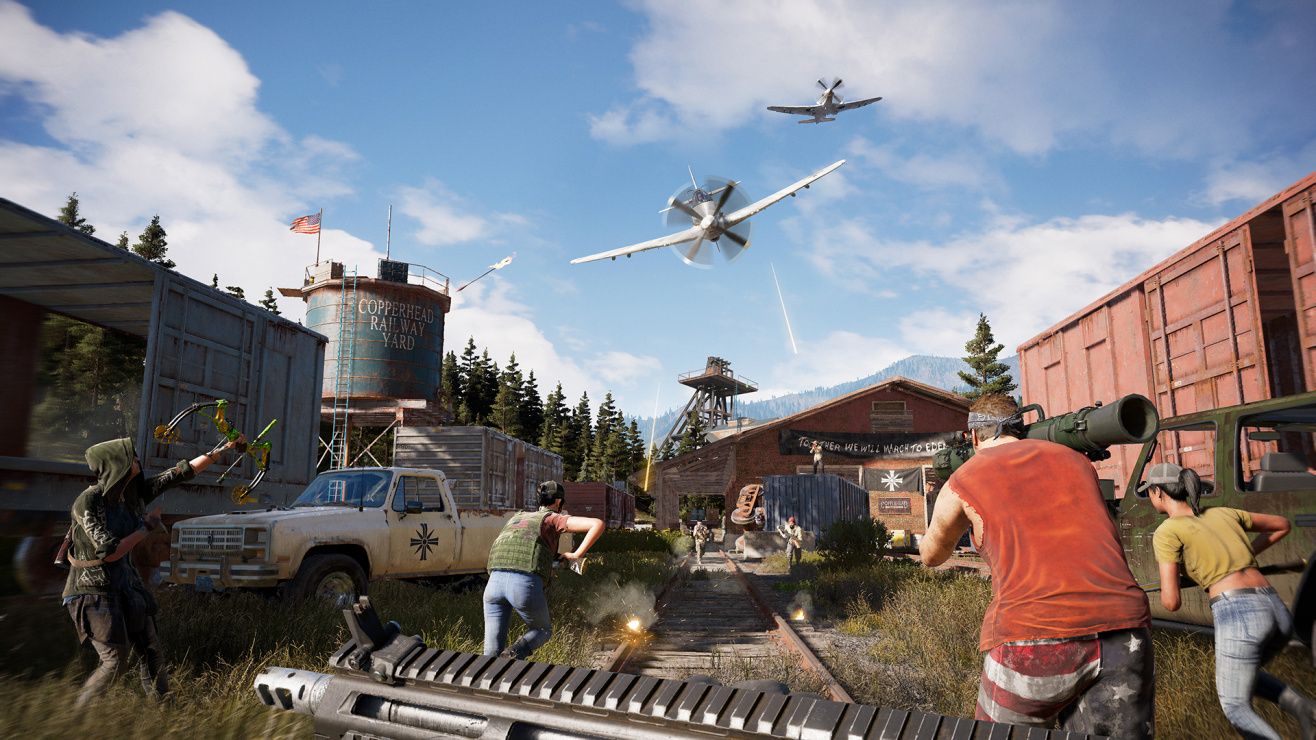 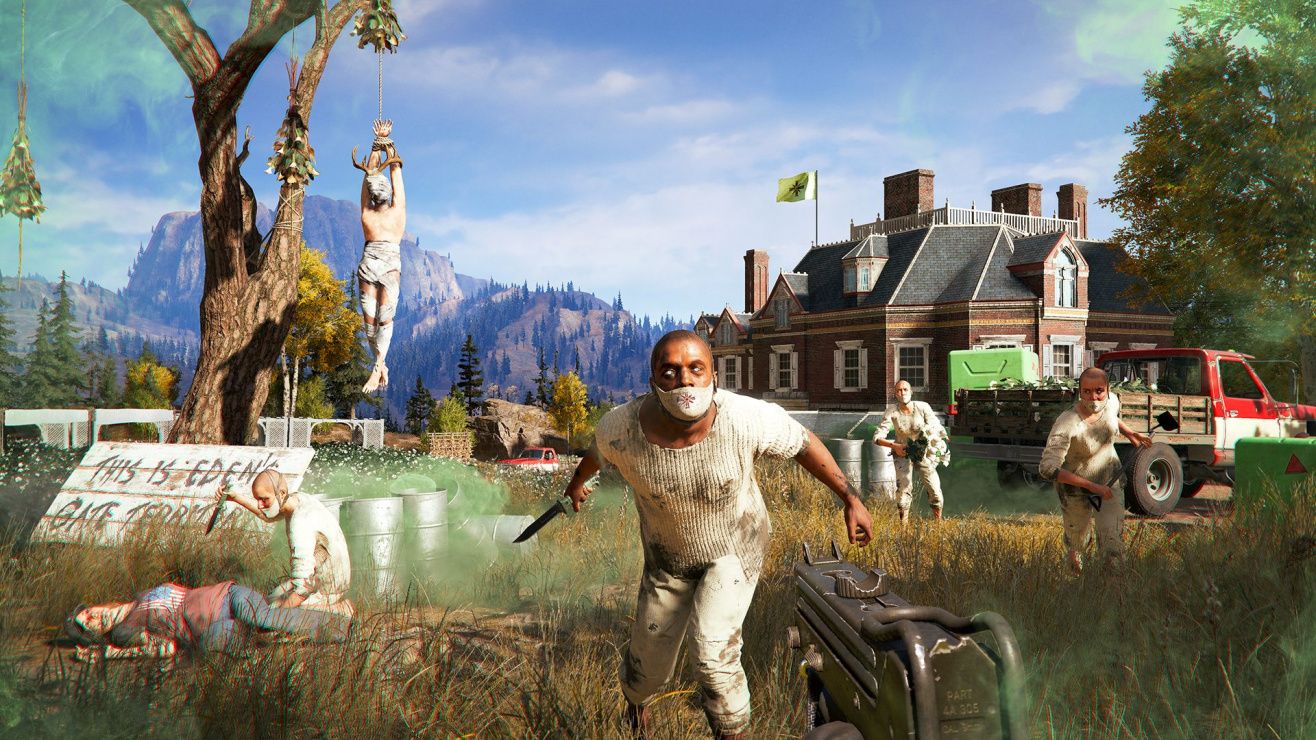 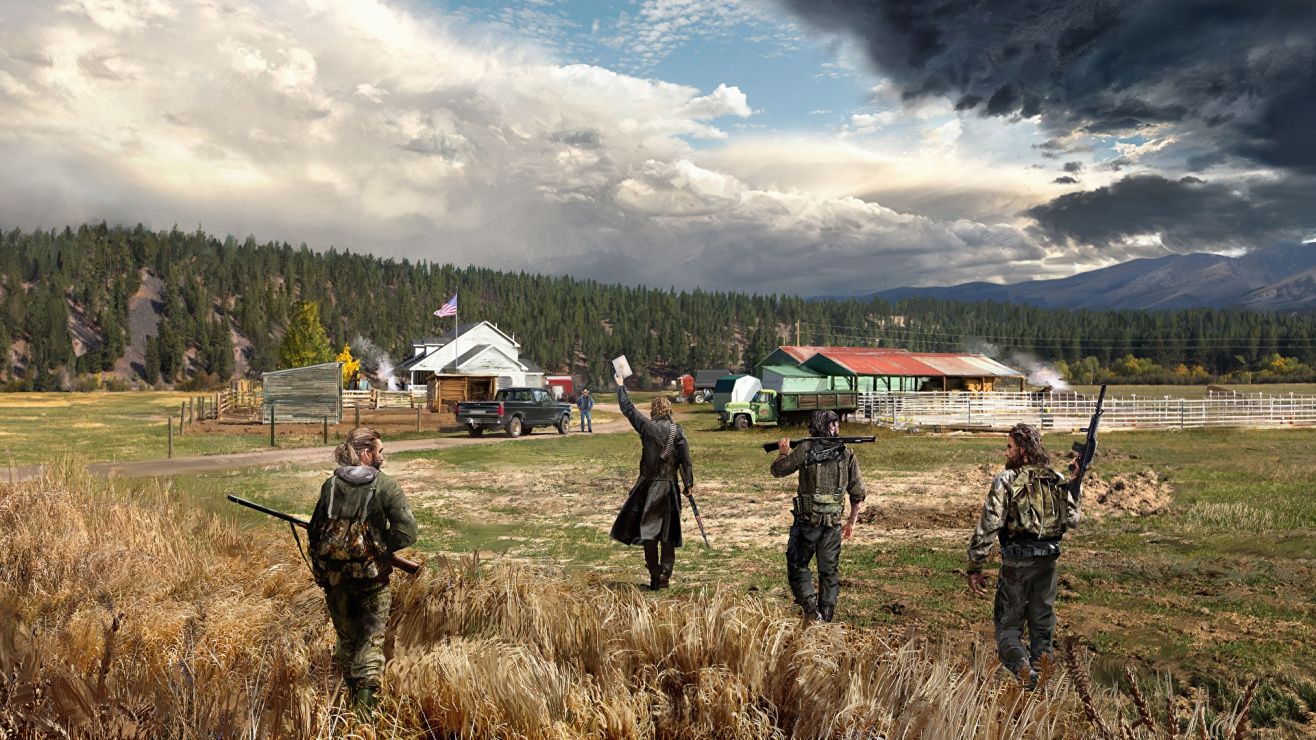 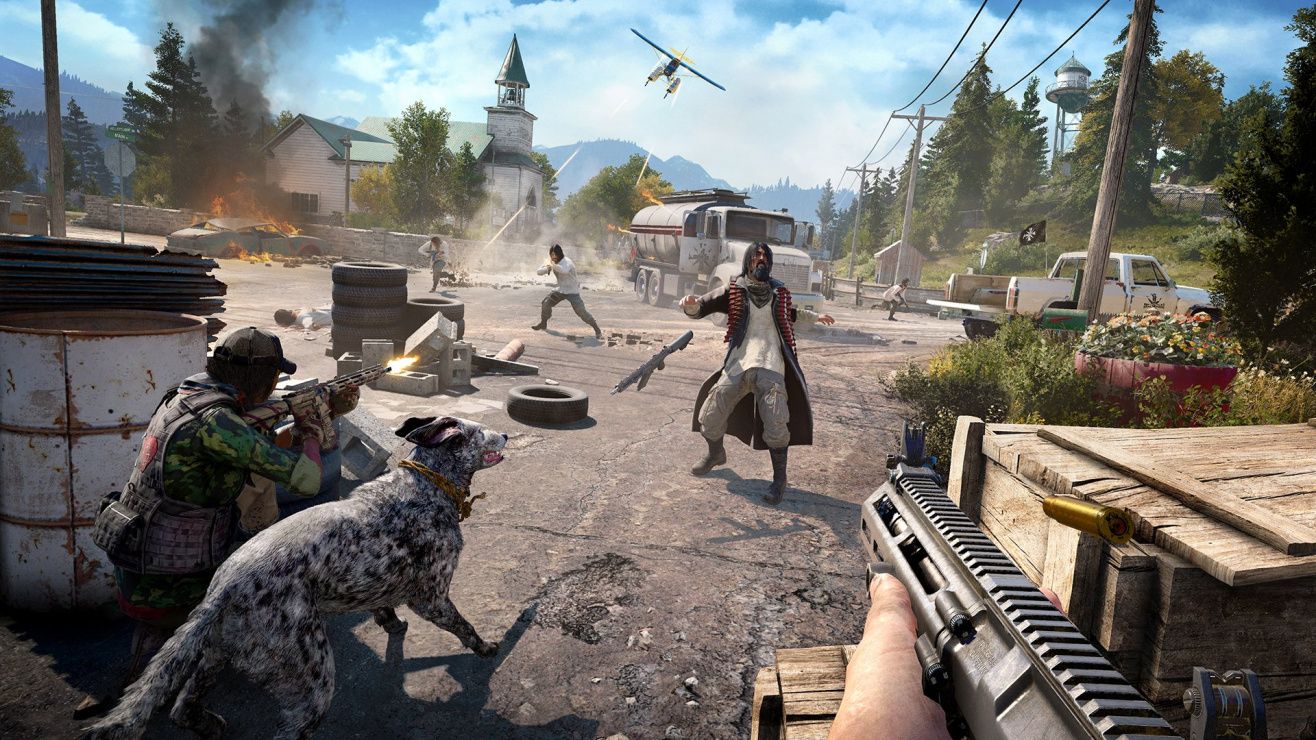 Great game, unfortunately, I wasn't able to finish the game after meeting Faith. I decided to settle down with Faith in the bliss and start a family.

In a nutshell:
Pros:
1. Good graphics
2. Surprises in the story at the end
3. Game physics is good
4. More involvement of Bosses in game (unlike Far Cry 4), which is good.
5. Adds lot more contents in the game when compared to its predecessors.
6. Availability of Guns for hire. OR form Your own squad with AI characters, which gets unlocked as the story progress.
7. No more tower capture to unlock a region (although some elements of it exists here too)
8. More detailed and realistic gun/vehicular battles.
9. Support for Co-op in Story mode.
10. Arcade mode for some extra game play.
Cons:
1. Even on pretty good configuration PC(GTX 1070 8GB), FPS drops to 30 sometimes, but not many instances. Probably because the game is tailored for AMD graphics.
2. No option to change difficulty in middle of game story. Need to play out entire story in same difficulty level.
3. Too much content in Game User Interface (UI) /Map which causes the UI to be cluttered.
4. If You are someone who is moving up the far cry timeline and played FC3 and FC4 before this, You might take at least an hour of game play to understand the game features.
5. In gun battles, hit reg not accurate sometimes.
6. Co-op in story mode restricted to only 2 players in total (i.e. Yourself and one friend).
7. If You invite Your friend to play in Co-op, only Your story proceeds/missions complete, and your friend's does not.
Above Pros and Cons should be sufficient if You do not have time to read through the detailed review and need to decide if You want to buy this game or not. More detailed review below.
P.S: Please play this game before playing Far Cry: New Dawn, to enjoy the new dawn instalment better.
In Detailed Review:
The Game:
Unlike prior Far cry instalments, this game environment has more modern vibes to it. So, You'll have more modern weapons, and visiting a place on the map reveals it. No more tower climbing to remove cloaking.
Basically, the map is a group of islands, ruled over by one main Boss (The Father) and 3 under bosses (His 2 brothers and 1 sister, well not biological though, haha). They together form a cult and make life hell for the natives. Its either join the cult or face Your maker, simple right?
So, You play the role of a rookie deputy who will fight Your way to liberate the islands, and there is lots of story and elements to it on the way.
The bosses:
Each boss brings in their own flavour and elements to the story and game play, which is kind of good and makes missions less repetitive. The more outposts You liberate (not many, may be 4 to 5 outposts per boss) and more missions You complete (given by the natives), the more interest the local boss takes in You, taking you closer to defeat them.
The Vehicles:
A wide variety of Vehicles available, like trucks, vans, SUVs, boats etc along with the new addition of airplanes and helicopters, which can be used in free roam and missions.
Guns for Hire:
Basically 2 types:
Type 1: Civilian
Each civilian You rescue from the cults grasp during free roam can be used as a Gun for hire during next mission, until You release them. They ride with You, they can die for You, kill for You with guns blazing or with stealth. They can be found all over the map. No specialisations as such, good for regular gun fights.
Type 2: Story AI Characters
The other set of Guns for hire are the characters which are unlocked as You progress in main story. This set of Guns for hire are specialists and can be added to your squad. They can be called upon whenever You need them. There are 9 of these specialists which includes 3 animals and rest humans. The human specialists include a sniper, an airplane pilot, a helicopter pilot, a crossbow specialist (for stealth), a missile man etc. You can form a squad with them or call them in separately.
Skills:
Unlike prior instalments, skills in FC5 can be unlocked by finishing challenges. The challenges (which can be viewed in Map menu) needs to be completed to get reward points. These reward points can be used to unlock skills. Some challenges (for example) are get 10 kills with grenade, 8 kills with knife throw, 20 Melee kills, 5 road kills etc. So, higher the game difficulty, completing some challenges might get a bit difficult as game AI gets better.
Skills are similar to FC3 and FC4, not many changes here. One difference I noticed is, no more crafting for weapon bag, loot bag, weapon holster etc by hunting animals for skins. This too needs reward points now. So make sure where You spend Your reward points well.

Weapons:
Anything and everything from a knife to arrow, pistol to assault and sniper rifles, from Grenade launchers to guided RPGs. If You have DLCs purchased too, You get martian weapons as well. You can carry upto 4 weapons at a time, provided You have unlocked the large weapon holster by using those reward points.
Overall I would definitely recommend the game.
Graphics: 8/10
Gameplay: 8/10
Story: 7/10
Attention to details: 6/10
Thanks for reading the detailed review. Please let me know if You have ore questions in comments section.

Spoiler free review.
It doesn't feel like a Far Cry game, while simultaniously feeling like a Far Cry game. In my opinion, this is how you proceed on with a franchise. Old mechanics that people didn't like were abandoned (and the game even makes a quip about one of them), and other ones are revamped in good ways.
Anyone who tells you that the game is a 'reskin' obviously hasn't taken a good look at this game. Ally NPCs that'll fight alongside you similar to games like Fallout, indepth gun customization revamped from Far Cry 4, an entirely new vehicle purchasing and customization system (not to mention the addition of planes and helicopters), full and proper map editor integration and revamp with a stupid amount of assets, a system where causing more chaos will have the main antagonists send things like recon helicopters out to try to find you when you're in their territory, a hidden stash system where you learn of the location of a cluster of goodies through word of mouth or recorded message... the game is different but in the best way possible. Whatever Ubisoft did this time, they couldn't have done it more right... except maybe add some more customization. Some areas are a bit lackluster.
People complain about graphics, but, to be honest, we're at a point where graphics getting better is starting to get a little much. It looks beautiful and fine as it is, minus a handful of oddly low-quality textures, but they're easily ignorable (and forgivable considering the game's environments)
Optimization is pretty good, however, the game seems to run the same no matter what settings I put it at. The only thing changing FPS drastically is making my FOV smaller, so if you have issues with FPS, lower your FOV if you're at something like 120.
* A new NVIDIA driver was just released that seems to give a decent bit of FPS, try that out too.
Progression feels pretty solid. Never felt pressured into buying into any of the microtransactions, so there's really no point to complain about them as they don't purposefully slow down progress or anything.
The game's atmosphere is on point. Matched with the story, if you're someone who can easily get immersed into something, you'll find yourself easily falling into the game, especially at key scenes.
I have not run into nearly as many bugs as any negative reviews claim there is. I tried playing with my friend and I had a glitch where it just simply didn't respawn me, but that was about it. Any other bugs were ignorable.
Definitely an improvement from the previous games. As good, if not better, than Far Cry 3. I really hope this doesn't fall through the cracks because of stupid issues like 'b-but microtransactions!!!' or 'b-but it doesn't look better than real life!!!!' Another common argument against buying the game is the DRM associated, among other similar factors. All I can tell you is that you're missing out, and if you can find a way to get it without facing those issues, do it. (I've never been bothered by any sort of DRM, so purchasing it on Steam hasn't been a problem.)
I also have a little bit of a small bias - the fact that it takes place in the United States instead of a random country I'm not nearly familiar with makes the game a lot more attractive to me.

you can pet a dog.

As someone who lives in the United States, I can confirm this is what we do on a day to day basis here