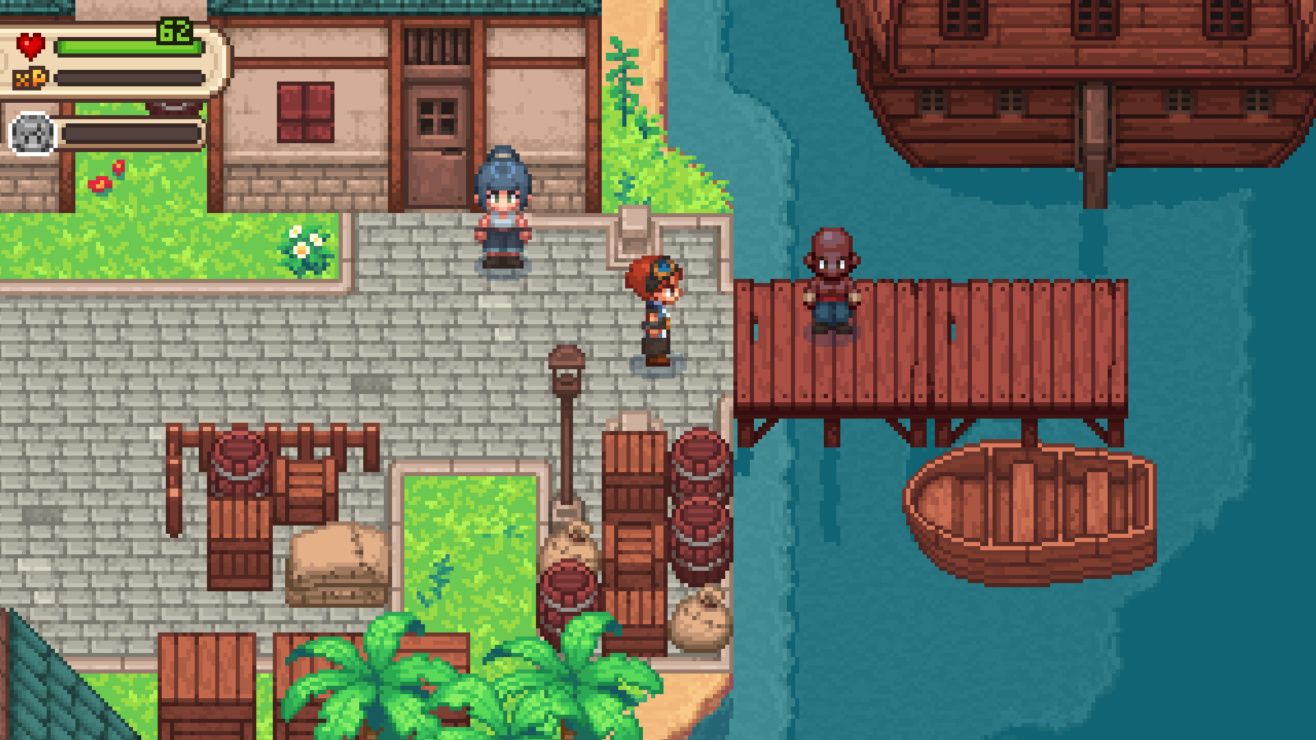 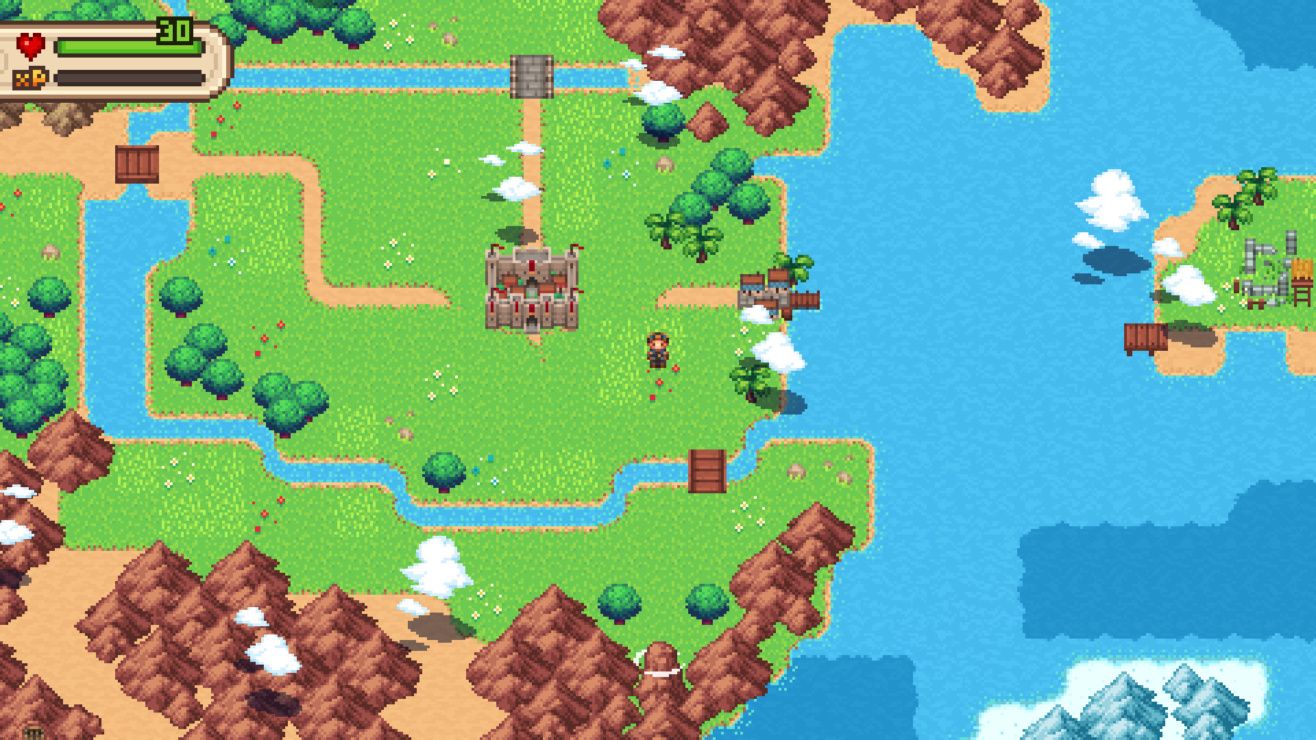 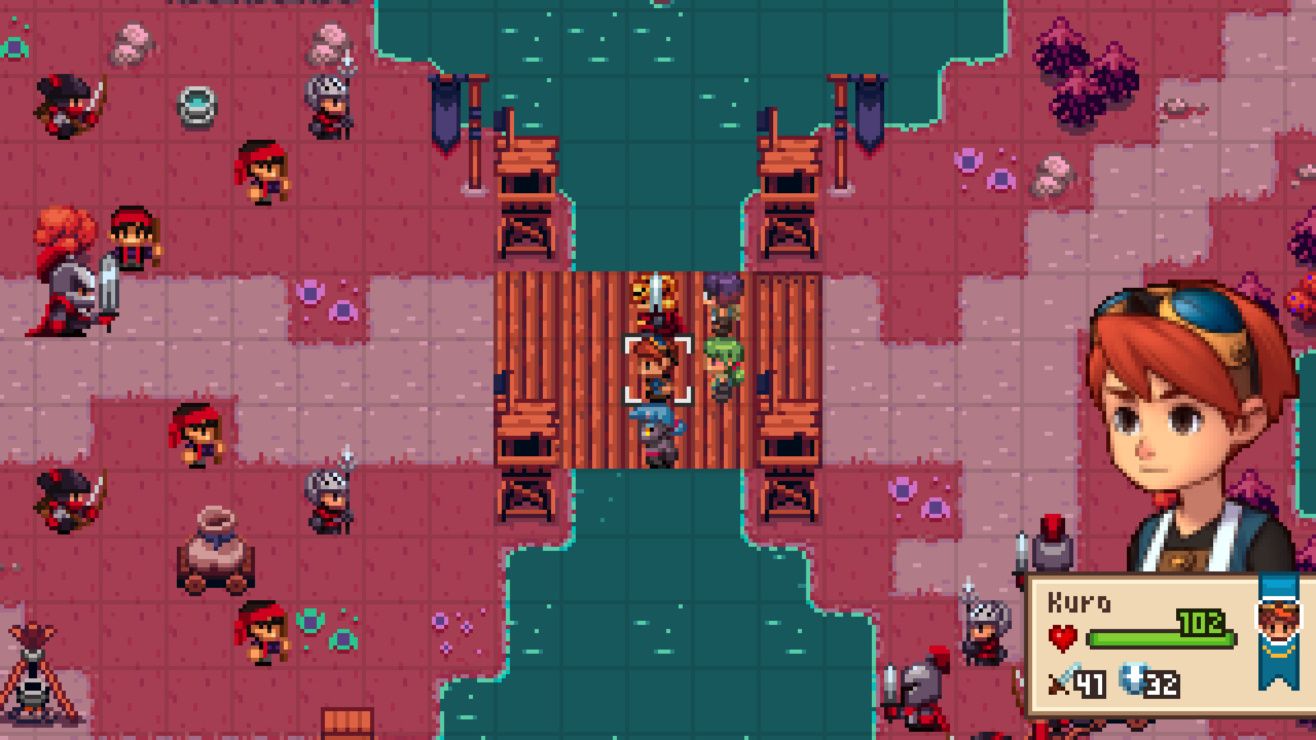 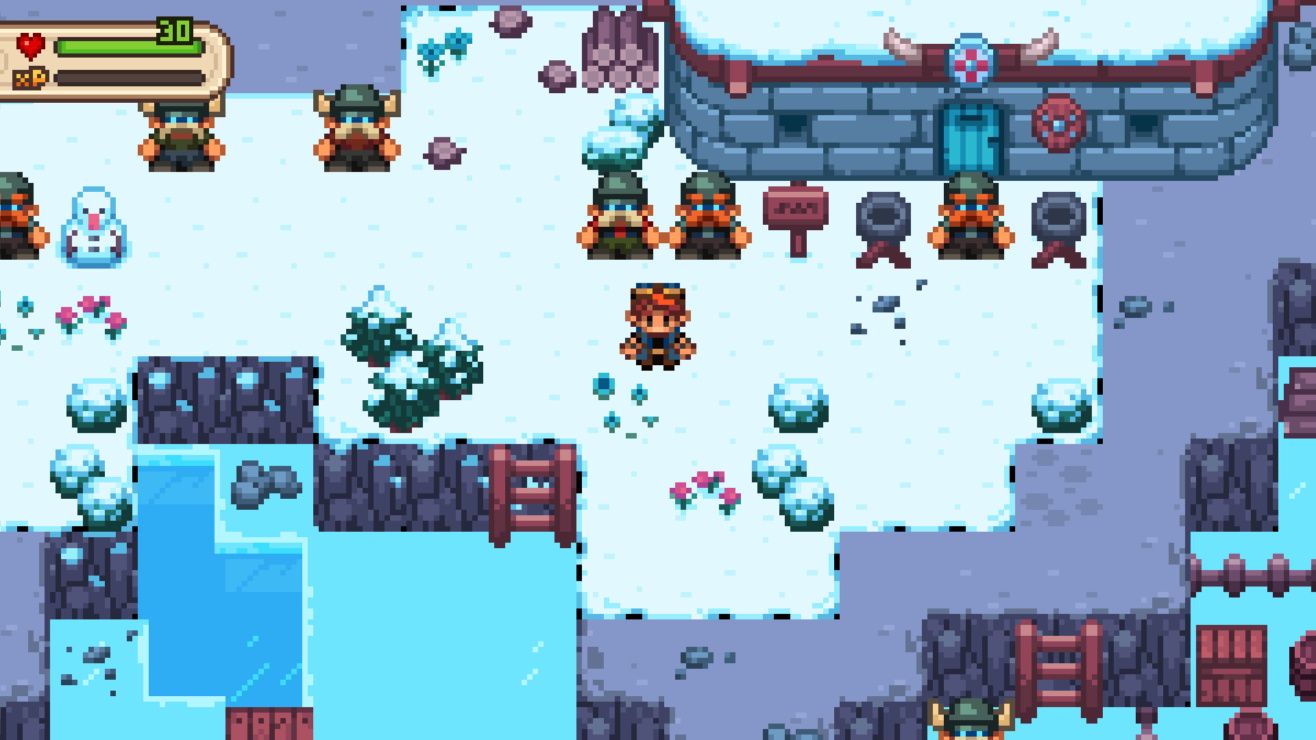 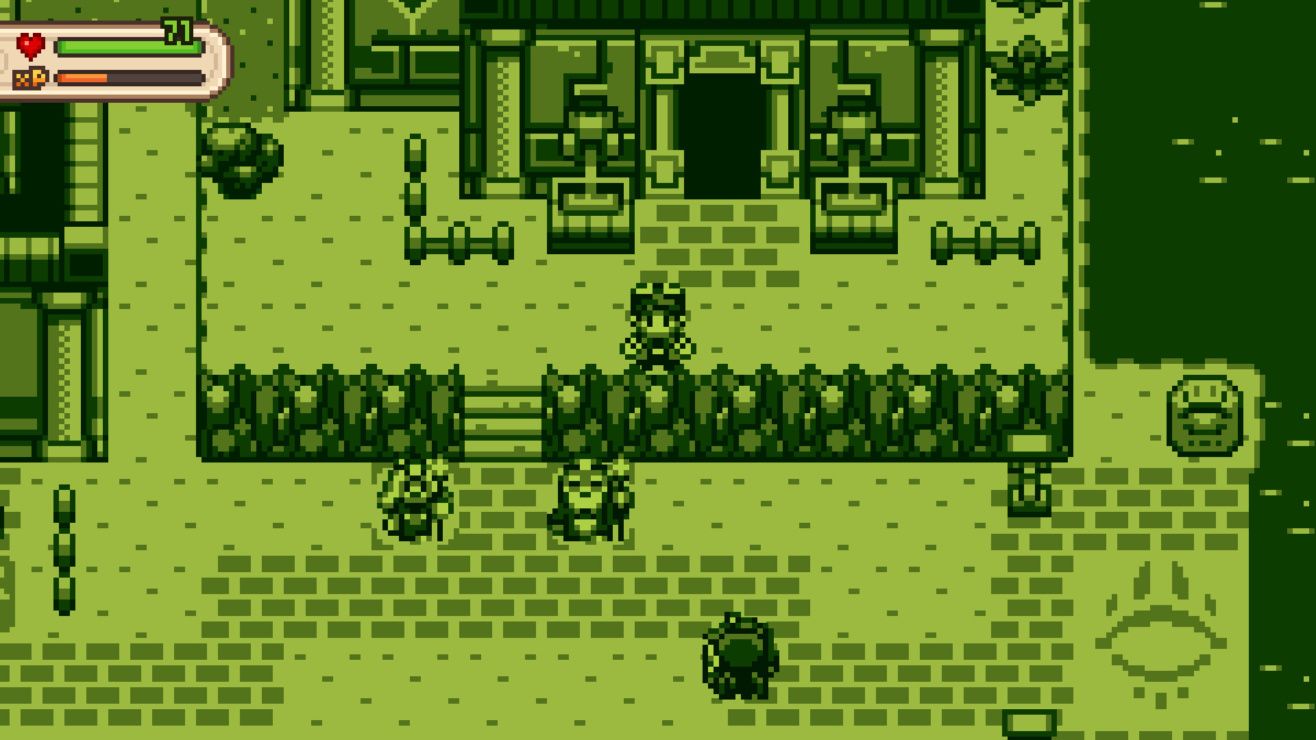 PC Steam action indie adventure singleplayer rpg fantasy iOS Android Google Play 2d retro parody
Evoland 2 graphics style is changing as you travel through time and its gameplay evolves as you move along the storyline. It is also a real RPG at heart, with a deep scenario based on time travel: explore different eras and change the history of the world. But are you sure that the consequences will not make things worse? Full of humor and references to classic games, the aptly named Evoland 2, A Slight Case of Spacetime Continuum Disorder brings a truly epic and extraordinary adventure, unlike anything you’ve ever played before!
Share Share Share
Promote for 50G

Okay, I'm gonna just say it:
This is one of the best games I've ever played.
Now, I loved the first Evoland. And I even saw plenty of reviews that said that Evoland 2 went beyond their expectations, but never did I expect this.
Not only was this a great story, a great game and a great experience, but the work that went into this must have been completely ridiculous. Not only was the entire world created, but (SPOILER!!!) it was created four times over with different graphics
I can't believe how many different gameplay sections were in this game. References to all my favourites and more :)
The ONLY single thing I can point out is that right near the end of the game, I noticed a couple typos.
So I'm going to go ahead and give this a 99% rating.
I definitely do not regret buying this and I hope the creators will continue to create great games <3
Can't wait for the next one.
EDIT: Completely forgot to mention the fantastic soundtrack. Definitely worth it.
EDIT2: I can't remember the last time I was this sad to actually know that I completed a game.
EDIT3: Someone brought to my attention that it's not obvious that this game is NOT a very serious game in terms of tone. Some parts of it are more serious, but despite some it certainly is a more lighthearted game and enjoys parodies, references and Easter eggs. I personally thought the story and concept was brilliantly constructed and I can only give my own opinion.

Please note: a Steam key for this game was provided by the developer.

Rating: 8.0 (out of 10)
(Ratings aren’t calculated based on a formula, but on my personal feelings)
Please feel free to join my group, DJ’s reviews, or follow me directly as a curator.
Don’t feel like it? No worries, just click here to read more of my unbiased reviews; no subscription required.
If you have any kind of feedback - positive or negative - please feel free to leave a comment (in case of negative feedback please try to keep it constructive). It would be greatly appreciated!

Evoland 2 is a love letter to classic JRPGs and some of the greatest games of all times. Evoland 2 is Zelda, it's Bomberman, it's Double Dragon, it's R-Type, it's Street Fighter, it's Fire Emblem and so much more! All the games within the game are created with love and depth. They're not just a gimmick, they're not just there for a quick, cheap laugh - they're really good! They're really well-implemented and work with the fantastic story, as well. Because Evoland 2 doesn't just copy and mimic other games - it develops an identity of its own.

A massive improvement on the first Evoland in length and quality. Still a mediocre game which screams fan-service throughout though, lacking much character and substance in its narrative (which seems to be hugely derivative of Chrono Trigger) and many minigames. And while the increased length of the game and things to do were greatly appreciated, the developers missed the sweet spot between quantity and quality, leaving an empty feeling and a yearning for everything to hurry along and wrap up.
Would still recommend if you have some spare time and want to play a game which doesn't take itself too seriously, but if you're looking for something a bit more substantial beyond nods and references to other games, a playable narrative with some light jokes throughout, and gameplay which consists of an amalgation of many different genres of games in the form of minigames, you should probably keep looking.

If you've played the first Evoland, this is nothing like the original. It's better in every way, which is great because I didn't really like the first one that much.
If you've never played the original game, you don't need to. The first game had little focus on its story and feels more like a tech demo, and while I don't really like the first game (especially the second half), Evoland 2 starts on a solid note and is consistently fantastic all throughout.
I'll avoid saying anything about the story because I think it's one of the main selling points, but what I will say is that the story is full of attention to detail and absolute care and love from the devs. It's one of the finest stories I've had the pleasure of sitting through, and only gets better as it goes on. On top of this the soundtrack is masterful and ties together the themes of the game.
The writing in some parts is a little bit odd however, as some lines/character names are based around a single throwaway joke. Finding a character named "John Snow" and instantly realising what the joke is going to be doesn't make the joke funny when it happens.
The different styles of gameplay come in at just the right times and the pacing never gets too slow or too fast. This is great for the later sections where you need to play three minigames to advance. The first of these, a beat-'em-up section, is personally my least favourite; luckily it only lasts about 10 minutes and after that you never have to play it again. There's also a match-3 section which takes about 20 minutes and, once again, once it's done you never have to play it again.
Finally there's a TRPG section which is longer, but if you rush through it you can get it done in around 30 minutes. In the TRPG section there are bonus areas which extend the time of the section, but they're not necessary; if you want to get the section over as soon as possible, you can.
In standard play the game comes in two parts: a top down ARPG similar to the 2D Legend of Zelda games for the overworld and a sidescrolling platformer similar to the underground sections of Link's Awakening for being underground. Both of these are fun to play, although some of the underground areas drag on for a bit longer than they should.
Aside from some minor issues, the game overall is incredibly well thought out. Its managed to sneak its way onto my list of favourite games and is so much more than I originally anticipated. If you have a pre-emptive opinion based on the first game, throw it away. Evoland 2 will take you on an incredible journey lasting ~20 hours and by the end you might even want to play through it again.

Evoland 2 Review - 30.08.2015
I have a passionate love-hate relationship with this game.
I've been thinking about recommending it forever and here's why I even struggled in the first place: The game's core is great. Some of the different gamemodes are just a blast, I especially digged the tactical rpg part, but some of them (I'm looking at you, Bejeweled) are just -horrible-. I played the entire game on hard, except for this one Bejeweled part that is literally impossible when your enemy just deals 90% of your life in a single swipe.
Apart from that, here's the deal. The game is amazing, yet it manages to annoy you every so often. Some parts are super tedious, occasionally, I just wanted to see if I could re-enter a certain gamemode or stage and then I had to play the entire level again because there's no option to turn back. Same thing with some sort of stealth segment, turns out, if you talk with a certain guard and hit yes (I wanted to see what he replied...) you go straight back into jail. However, even though there a lot of bugs and glitches, it was still super enjoyable. Because the plot is well done, the music is amazing, the gameplay feels (for the most part. Fuck Bejeweled.) good and the controls are tight and responsive. It really sets you back with a bazillion references to older games. I don't even want to spoil a single one, so you can experience it for yourself. So, after this short wall of text, let's review.
+ Amazing Gameplay for the most part.
+ Stunning visuals. (Mostly the Pixel Art though)
+ Amazing humour. Yes, it is THAT good.
+ Stays true to what it does. (Basically, the different gamemodes feel like they should, is what I'm trying to say.)
+ Time Travel Mechanics really add to the plot.
+ Now that I mentioned it, the plot is pretty sweet too, with a satisfying ending. (For me, that is. I did notice some people complain about it being too open ended, which is not really the case.)
- Tedious Mechanics, occasionally.
- Bejeweled
- Bugs/Glitches appear way too often, expect to restart the game or quit to title occasionally. (For example, do not open the treasure radar in the tactical rpg section. Shit goes down.)
- Bejeweled
- Unintentional re-playing of various long and annoying sections, though I guess that was my fault.
- Bejeweled
TL;DR:
Good game, you should give it a shot, fuck Bejeweled.
// I might update this review. //