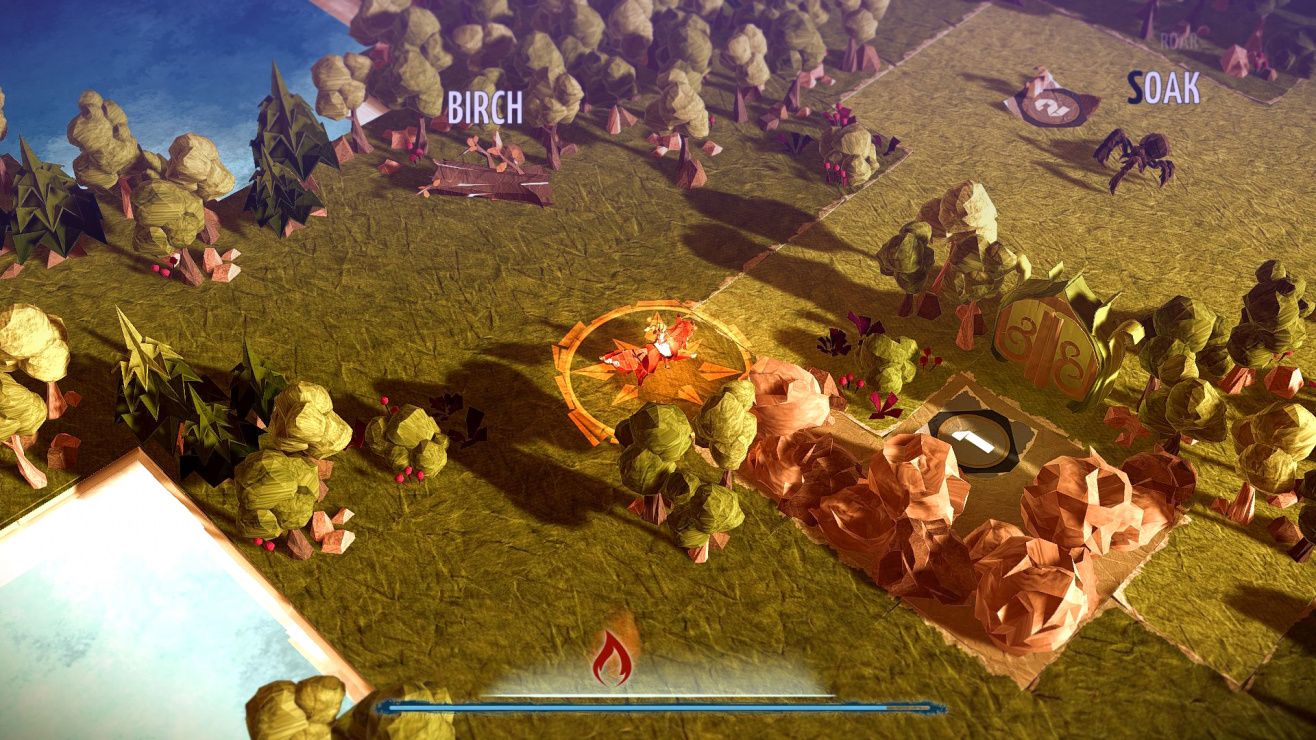 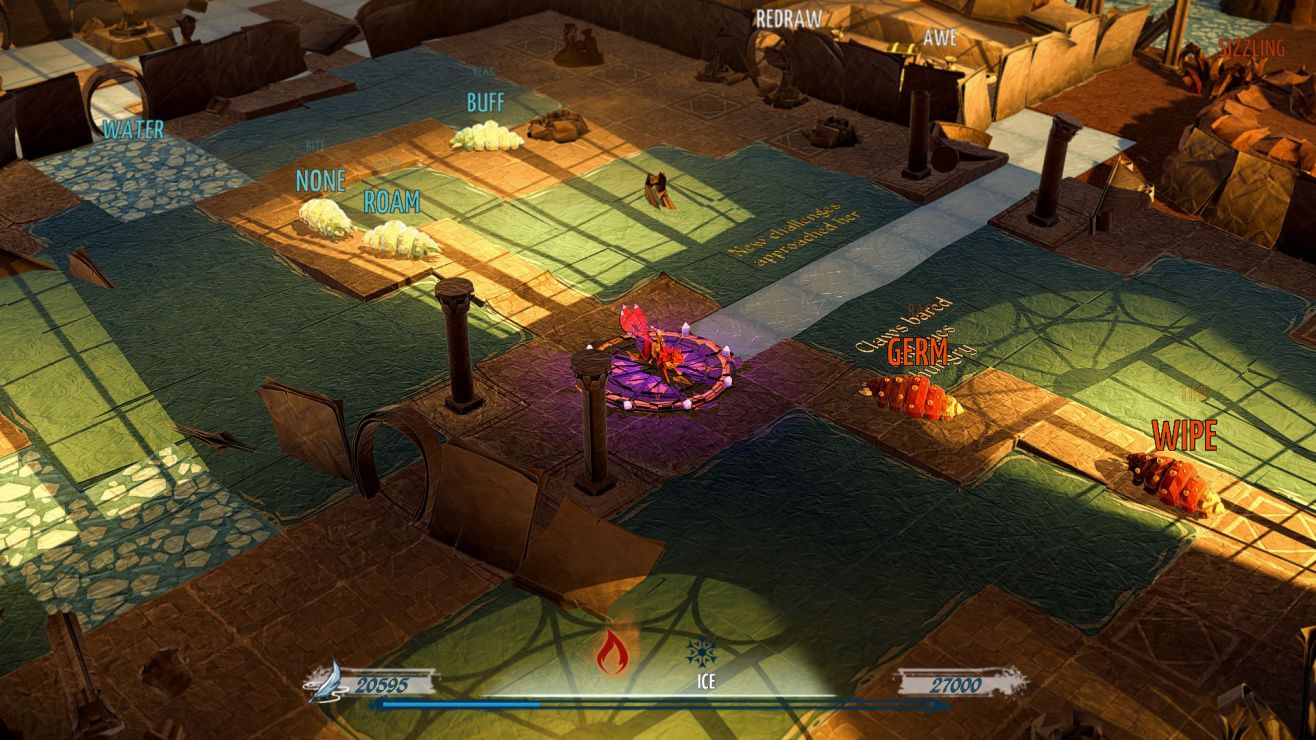 action adventure atmospheric indie magic rpg typing
Epistory is an atmospheric adventure typing game that tells the story of a writer lacking inspiration who asks her muse to help write her latest book. In Epistory you play the muse, a fictional character in a world where everything is untold. Your adventure begins on a blank page, but the world will soon become larger and livelier as you gather inspiration, solve its mysteries and defeat its enemies. From movement to opening chests and fighting in epic battles, every element in the game is controlled exclusively with the keyboard. As you progress and explore the fantasy origami world, the story literally unfolds in the writer’s mind and the mysteries of the magic power of the words are revealed.
Share Share Share
Promote for 50G

I planned to write a novel about this game as a review but then I played the game and got tired of typing.
Do you like to type?
Then play this.
It is also good to practice on your typing speed while playing a fun game.
Hey, I am an achievement hunter!
~8-9hours long story and a lot of additional grinds required if you want a perfect game / earn all achievements. You need to open all 64 chests you can find in the story game but you can keep playing it once finished so you can backtrack. After that, you can farm the kills/words in the arena and if it is acceptable to you then you can speed it up with workshop mods.
This review was created for Average Achievement Hunter curator
Follow my curator if you like to see achievement related information (completion time, difficulty to get all achievements) on store page of the games.
The curator group doesn't mark any game as recommended so it shows useful information about achievements on the store page of the games without influencing the main store page of steam with recommendations + all games sorted to lists based on expected completion times. No point not to follow!:-)

Please see my curator page for more games that are worth your time
Approximate amount of time to 100%: 12h
Estimated achievement difficulty: without steam workshop 7/10, with steam workshop 4/10 - The steam workshop only works for windows in this game!
Minimum number of playthroughs needed: 1
Has it been in a bundle: yes
Is there a good guide available: yes, here
How many people have completed this game at the time I'm writing this review: 370 on Astats
Multiplayer achievements: No
Missable achievements: No
Grinding Achievements: Yes, the one where you have to kill 10k enemies
DLC-Only achievements: No
Time-gated achievements: No
RNG-achievements: No
Does difficulty affect achievements: No
Unobtainable/glitched achievements: No
This is a fun rpg/adventure game in which you do most of the actions by typing. You're playing a girl who is riding a fox and will explore the world. How further you get into the game, the more abilities you get, which will open new paths to other dungeons. You level up by typing words to kill monsters or to destroy items. When you level you get skill points to add to skills. One of the most useful skills for achievement hunters is the ability " knowledge" because it will show the treasure chests and nests on your map, both you need for achievements. If you get it early and keep an eye on the map for those 2 then you don't have to go back to earlier dungeons for the 100%
Speaking about achievements, there are 3 types of achievements in this game:
- Story-related achievements
- Completionist achievements, get all treasures, kill all nests, get all the upgrades
- Combat/typing related achievements
The nests gave me a hard time, because I type with 2 fingers and English is not my native language, which made it harder to type some of those long words. The achievements for typing really fast or making no mistakes for 1000 characters are a hell for me without the steam workshop mod. So for the last 3 nests and most of those type fast, kill 100k monsters I used the Aaa mod that is suggested in the guide linked above. The 100k monsters is a real grind. When I finished the game including getting 100% in the campaign I killed under 5k monsters, so I had to grind the other 50%, but the Aaa mod made it very doable.
+ Fun and different style of gameplay than most games in this genre
+ Beautiful artwork
- Grindy and very hard achievements without a mod

Typing as a learned skill is in a weird place. Initially growing out of the typewriter classes popular in the early 20th-century, lessons in keyboard etiquette have mostly disappeared from schools as computer literacy (and by extension, typing proficiency) becomes an assumed skill. Broadly, I think this is a negligible loss to curriculums. Teachers are taxed for resources as-is, and removing a class that will likely be self-internalized by students or become outdated with changes to technology (voice recognition, touch-screens, etc.) is preferable to taking cuts to programs that students will be less widely exposed to (read: the arts).
That being said, there is a certain joy to typing. Clicking keys and seeing ideas take digital form is a sort of magic deserving of at least some attention. Not for the sake of cultivating a skill - typing classes historically have only existed to turn typing into a marketable resource - but to foster an appreciation for language; the shape of words, weird idiosyncratic spellings, the way different sentences can feel to read versus to say. There is already research demonstrating a correlation between writing quality and typing skill, which is to say nothing of the self-efficacy for writing gained by lowering the barrier to putting words on paper.
Then again, learning to type is boring. Untenably boring. Typing games attempt to gamify finger drills and pattern recognition, but even Mario Teaches Typing (Interplay Entertainment Corp., 1992) failed to achieve more than a lesser tedium. One can only type J to bomp a goomba so many times before the letter begins to look like a cursed rune.
Two decades after MTT, Epistory: Typing Chronicles (Fishing Cactus, 2016) finds an unexpected niche within the dead genre of typing games by shifting the focus from typing drills to an exploration of language. At no point will Epistory ever tell you which finger to use for the letter A. There are no color coded layout sheets or four word speed drills. Epistory recognizes that typing is no longer a novelty. Everyone will be coming to the game with their own typing quirks, and rather than try to strong-arm the player into finally using their pinkie, Epistory wants every player to enjoy typing on their own terms.
How this works is through a brilliant and dense contextualized dictionary for every object in the game. Lena LeRay has written about the delightful way Epistory matches words to situations, summarizing it well by writing “for clearing fallen trees, all the words are tree-related; for planting plants, all the words are flower names; for clearing rocks, mineral names.” Linking words to the player’s actions might seem an obvious move for typing games, but Epistory is the first to actually explore this in depth. It relies on a rich appreciation for the particularity of language to enhance each scene through player interaction.
Not everyone has an internalized love of obscure words and synonyms, and those who do often fall into the trap of self-indulgent verbosity. Epistory threads the needle between a fascination with highly technical, multisyllabic curios, and an appreciation for simple, recognizable words. There is an inexplicable exhilaration to successfully typing “amphibology” and zapping a towering insect, and there is joy in quickly jotting out “fire,” “burnt,” “torch,” and lighting several lanterns. Seeing words take corporeal form, even if only tangentially related, never stops being delightful.
Regrettably, Epistory introduces a narrative element late in the game that tries to ground the fantasy dungeons and hordes of insects in the real word, concluding with a Shyamalan-ian twist that would be more disappointing if it had any connection to the rest of the game. It is a bizarre shift for a game that otherwise is firmly interested in the ways we use language, how the form of a story is as important as its substance, and that language is something to be indulged in. I would love to see these ideas expanded upon in Epistory’s upcoming spiritual successor Nanotale as there is nothing else comparable playing in this space.
I can understand the developer’s reluctance to label Epistory educational given the disappointing lineage of typing games it would be entering. But I do hope it sparks a larger interest in games as implicitly rather than explicitly educational. I did not learn to type from playing Epistory, but I learned some new words and got a bit faster at the ones I already new. Furthermore, I realized how much I enjoy the physical act of typing and how little exists to scratch that itch. Which I guess explains this essay.
This review was originally published on Kritiqal.

I wrote this review without looking at my keyboard.

A delightful little game. Everything is so charming, and the systems are surprisingly deep for combat that's 100% controlled via typing. Some of the end game fights get surprisingly tough, and it was really fun swapping between all of the different elements to overcome them.
Overall I really enjoyed it!