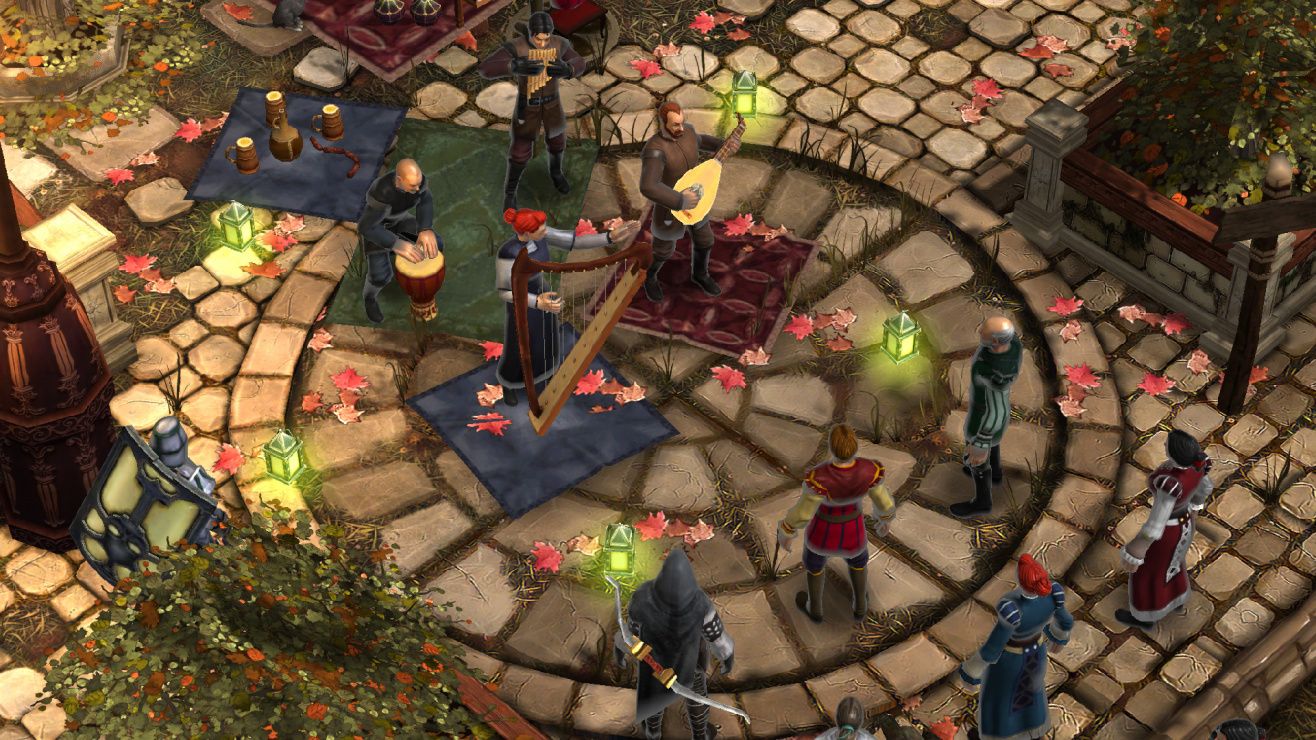 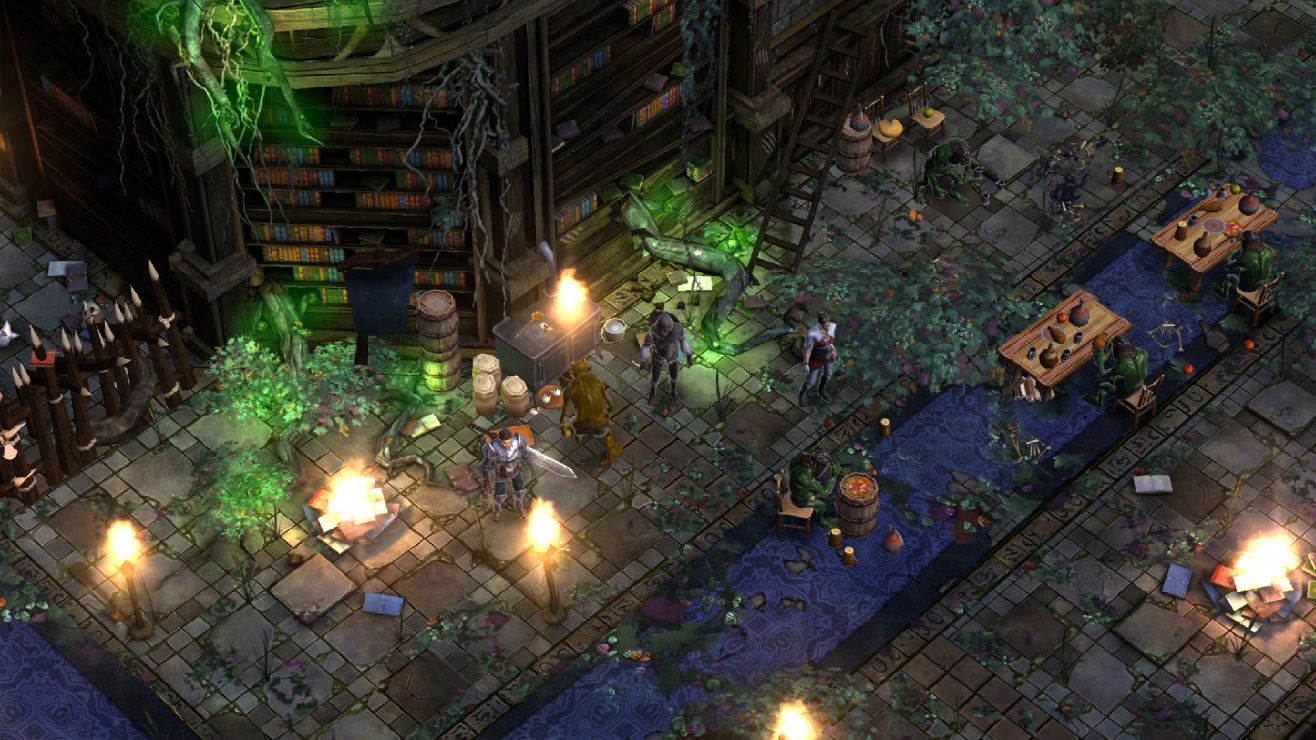 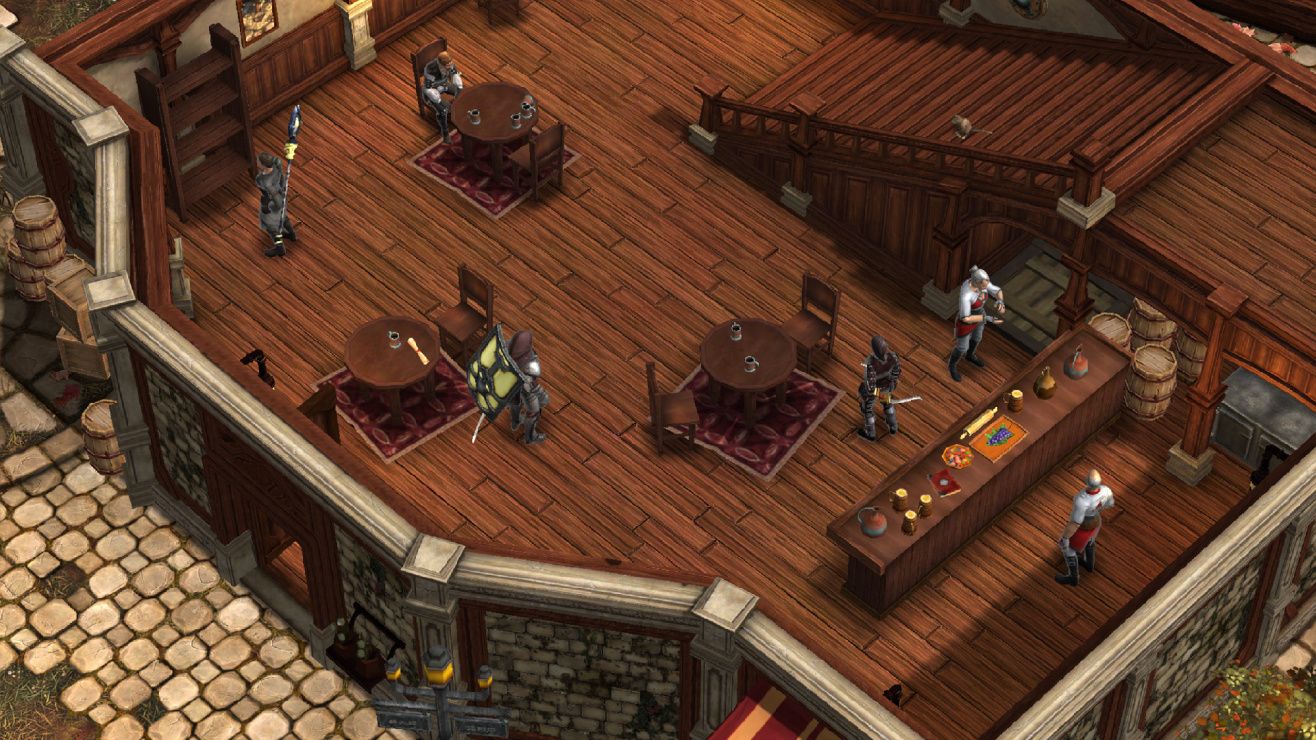 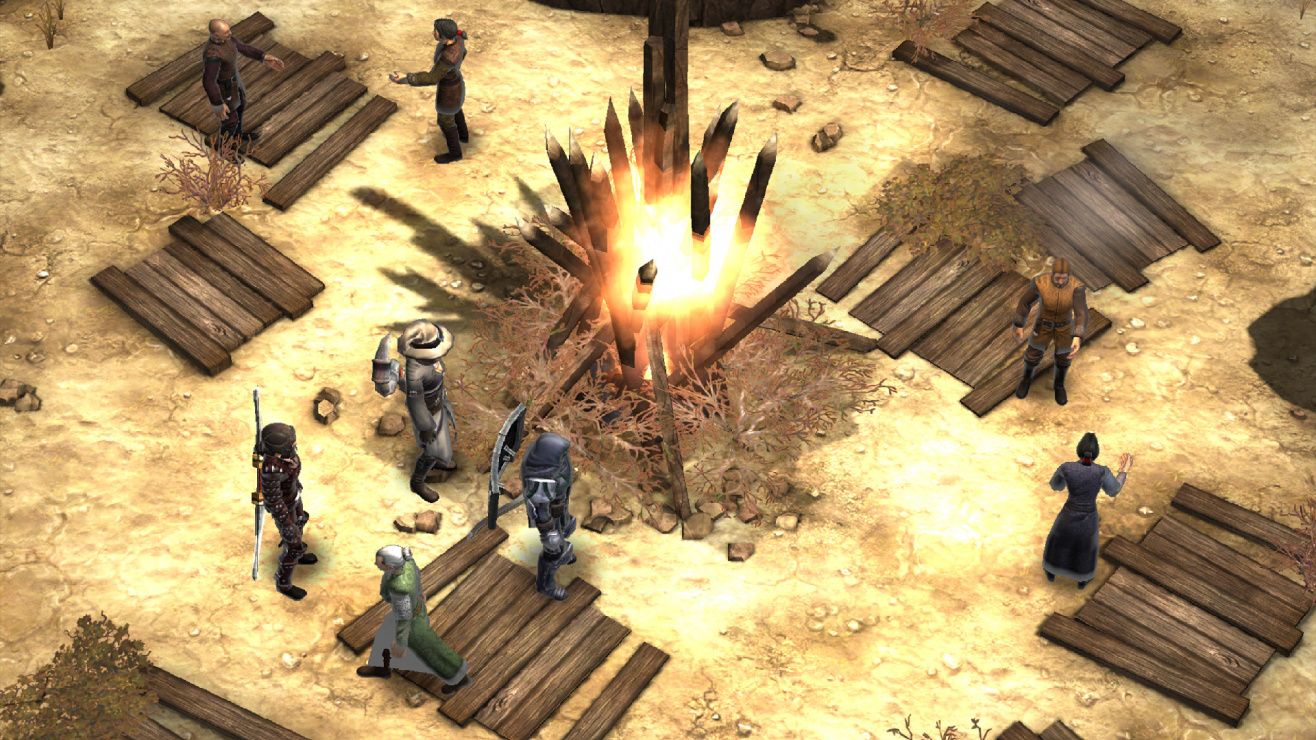 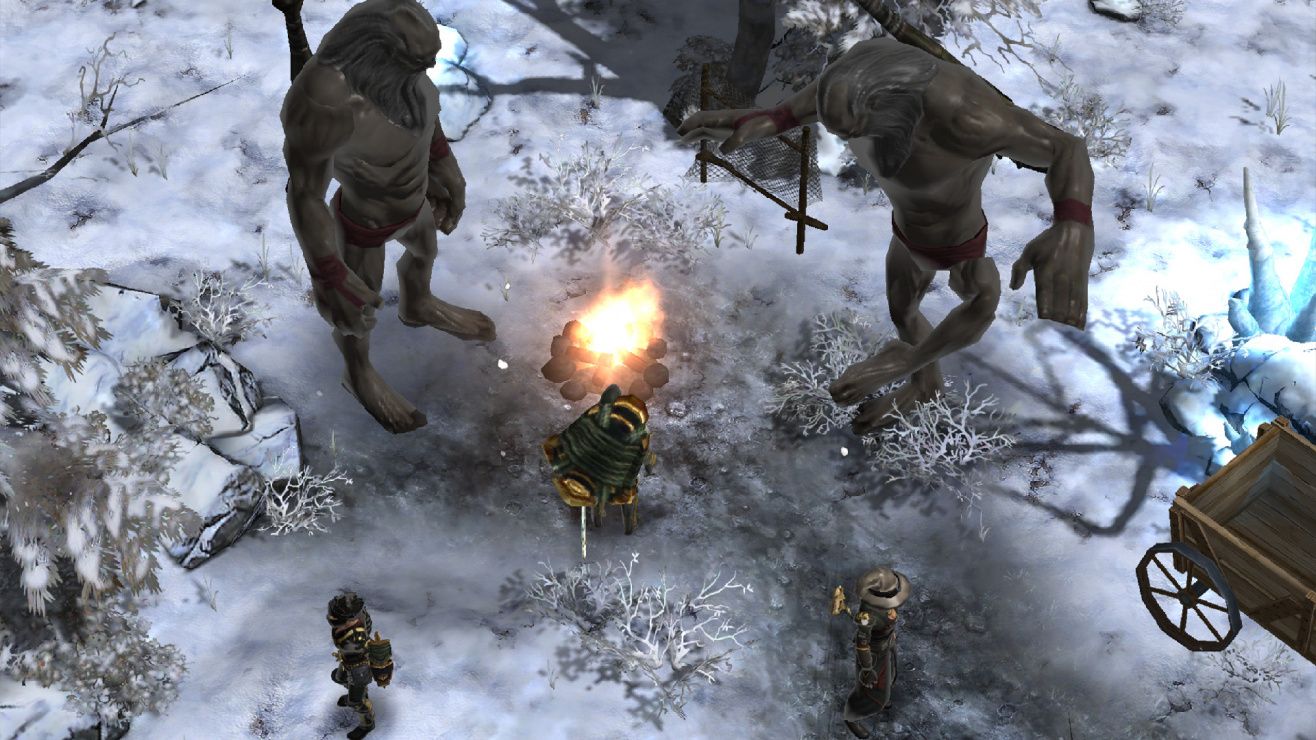 action adventure fantasy indie role-playing rpg strategy
“Back in the earliest days, there was no sun and the world was dark. The heavens opened up and stars fell like beacons into the pitch black world, and they were known as “Embers”. Powerful and wise druids of a primordial race, “the Lightbringers," roamed the land searching for this luminous matter. They performed a ritual of awakening to call the “Embers” out of their deep sleep. Suddenly the world became bright, and the veil of darkness was lifted. The Embers were the embodiment of magical flame, light, and life, but as word spread about the sheer power of the Embers, they came to be hunted and captured…and so the War for Ember began…” A passion project 10 years in the making, Ember is a homage to classic role-playing games (RPG). Enter the world of Ember as a resurrected “Lightbringer” summoned to protect the dying Embers as the world is on the brink of collapse.
Share Share Share
Promote for 50G

An incredibly deep CRPG for the meagre price tag. Looks good and plays well. Fans of BG and Neverwinter Nights won't be disappointed.
8\10

I've now played this game for a few hours in order to see if I would at least have fun. Currently it is on sale for $2.49 and probably less money than the beer I'm drinking while writing this review. In all honesty, I have a lot of experience playing many role-playing games, and find every one enjoyable to some degree. So in some way, is my opinion biased toward my feeling on games? yes. However, again after spending just 3 hours (SO FAR) playing this game... well, the fact is... I recommend it. Having a lot of fun, and thank you for creating it.

At $10 this is an absolute steal. Yes, the stats are incredibly simplistic. But think about it and realize, that's literally just every fantasy RPG out there: strength checks for fighters, dex checks for rogues, and Int checks for wizards.
The atmosphere is actually pretty incredibly. It's very detailed for such a deceptively simple little game and I can tell that the devs actually put lots of love and care into it. Just wandering around in the rain in the forest is great. It captures that feeling so perfectly I find myself wandering just to enjoy it.
The fights are meh. They're not bad by any means but it's all pretty rote at this point. Again, just simple fantasy RPG stuff familiar to absolutely anyone. The one big thing lacking here is inability to really control and micromanage the party.
The best thing by far is the writing. In the first two hours I was bracing for some absolutely terrible writing, but as you can see after playing it for awhile I'm finding myself playing it really partly just to enjoy the writing. I'll just find a nice spot with atmospheric sounds and sit there reading my book collection. I'm honestly pretty surprised at just how good and entertaining the writing really is, and somehow gets right what Pillars of Eternity for example got wrong. Here it's not droning on boring dry stuff from board meetings. This is both boiler plate fantasy fare while also not, and I find myself wanting to learn more about this world each step of the way.
I'm only about halfway done so I can say the 10 hours on howlongtobeat is just flatly wrong. This game has way, way more than 10 hours of content if you actually bother to do the sidequests, sit there and read, and just soak up the experience.
This is actually a pretty darn good game and I'd definitely recommend it so far.

I picked this up on release day a few years ago, started it but then got distracted and just got back into it recently (about 3 years later).
I had only one crash in the 24 hours it took me to finish it, and that was while fast traveling; the autosave worked and I lost nothing.
With its price tag, I expected Ember to be a pretty little game for a few hours, and that's what I got.
Pros:
- I like the look of the game. Even if doesn't have the best graphics ever, I enjoyed them and it was one of the main reasons I bought the game.
- I also liked the different zones (forest, farmland, plains, snow, desert, swamp).
- You can store stuff in containers. I took over a house pretty early and stacked every single gemstone I ever found in a backpack, while keeping the unique loot in a wardrobe. I liked that this was possible, even if it is pointless.
- You can also drag items out of your inventory and place them somewhere. Same as above.
- You can reset you allocated attribute points. I ended up not needing this, but having the chance to is nice.
- You can fast travel to the different zones. This might not be a pro for players who like difficulty, but if you don't want to backtrack all the time this is nice.
- A sell all trash/treasures/crap equipment button!
- You can find 6 bags for your inventory with 16 slots each. Useful for sorting things and keeping them from being sold with the buttons above.
- Combat has a few auto pause settings (on start, critical health, skill use) and a difficulty setting.
- It's possible to remove the interface through the console for screenshots, though it is not possible to move the characters out of camera range.
Neutral:
- I ended up picking skills mostly for if they can be activated without dragging the cursor. Go away, Greater Heal, you are annoying, I take Healing Burst.
- The crafting system is OK, it allows you to get exactly the gear you want, instead of dealing with loot that might or might not fit. You can find/buy recipes, but also craft without knowing the recipe ingame (by experimenting or finding the recipes online).
- All crafted best gear uses almost the same recipe, and you can buy pretty much all ingredients for it. I could have probably saved several hours if I hadn't picked up every ore, every flower and every fish. I ended the game with over 50.000 gold and enough food, ingredients and crafting materials to supply a small city. Because:
- You can heal everywhere with a bedroll. This makes potions and food less useful and could have been a bit more limited (I'll take a nap, nevermind the zombie in front of me, he can wait 8 hours). Food can't be used during combat, and after combat you can just use the bedroll.
- Lockpicks are quite underused. There was one point during the story where a bunch of them were needed, but after that I can only remember one or two chests, making the pile of lockpicks I took with me useless.
Cons:
- I'm really not a fan of the system of getting skills via equipment. A big part of my love for RPGs is character building and that falls pretty flat here.
- Speaking of character building, the only thing you can select about the character is the name.
- All quests have markers, all the time, even the ones you haven't found yet are marked on the map.
- All the above points mean there is no replay value for me, as I can easily finish every quest the first time around and there aren't really any different characters to try out.
- Loot is pretty anticlimatic. Everything is orange (as long as it has a skill attached), but most items have a "Crude" prefix and are basically trash, and the occasional good loot is barely noticeable among those. Tying the color to the prefix would have been more rewarding.
- The comments during fights (especially of Zannon) are pretty annoying after a while. There isn't much voice acting so I just turned off voices and didn't have the feeling I missed anything.
- There are only 3 save slots (+ autosave, + quicksave).
- The screen fading to black for mining/fishing is unnecessray and incredibly annoying. I get not making animations for it, but I'd love to just pick that stuff up then without interrupting gameplay all the time.
- Some ambient effects can be a bit unfitting; it rained a lot in the desert area and I could swear I saw a bird fly through the lava caverns.
All in all, perhaps it wasn't the worst that this game had little character building, because I acutally finished it instead of spending days to wonder how to build my chars. I ended up playing "Warrior" with my two companions being "Mage" and "Ranger/Thief".
The story was nothing special, not very surprising but not the worst I've ever seen. There are barely any choices (nor consequences); sidequests are pretty straightforward, too, but a few had a nice touch. I probably won't play it again, but I enjoyed my time with it.

A nice little RPG. Not a 100 hour epic, but I've put 20 hours into it, so it's not just a single-day game. It seems like it could be a mobile port, but don't let that fool you. It looks nice, with varied environments. Companions can be respecced to fill the role you want them to. Crafting isn't terribly deep, but it's useful, and I'd rather have simple and solid than needlessly over-complicated. All in all, a solid game that deserves more love.

Pros:
- Beautiful Art
- Good Soundtrack
- Good Story
- Nice modern take on classic style RPG
Cons:
- Crafting was never necessary, was too time consuming and not rewarding enough for me to bother.
- Needs a sequel, not really a con, but the story was great and I want to see more of it, I feel sad that it's over.
8.6/10 would allocate my skillpoints unskillfully again.

Buy this game.
I was really surprised how good this game was as a single player game. It feels a lot like the old Dungeon Siege games or Diablo with a killer story. The lore is amazing, and the game is well paced, and the story is not one I have played before. You can be melee, ranged, or magic, and then get to choose between 3 NPCs that cover the classes you did not pick. Skills are well balanced, and maps are varied and have enough going on.
I think my only problems with this game is you could not pick female or male, I wish the thieves guild was more developed, and there is not another game in the same universe.