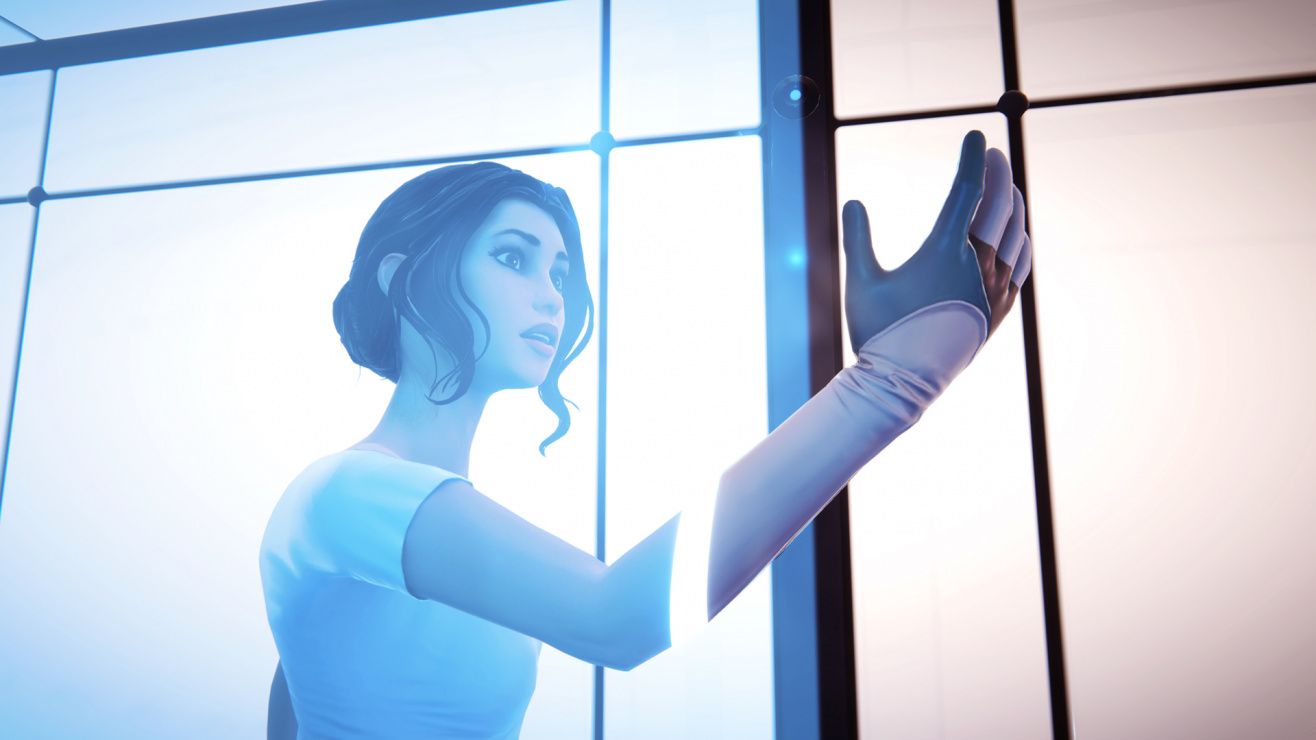 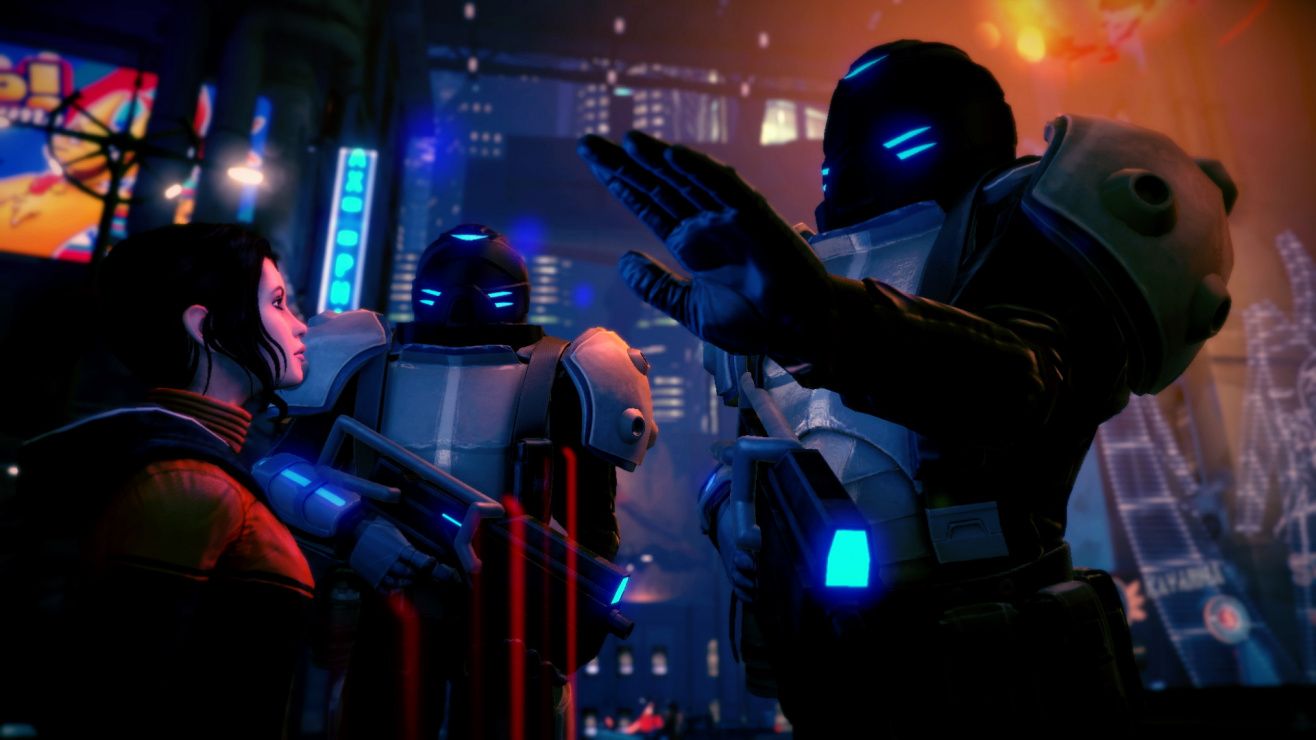 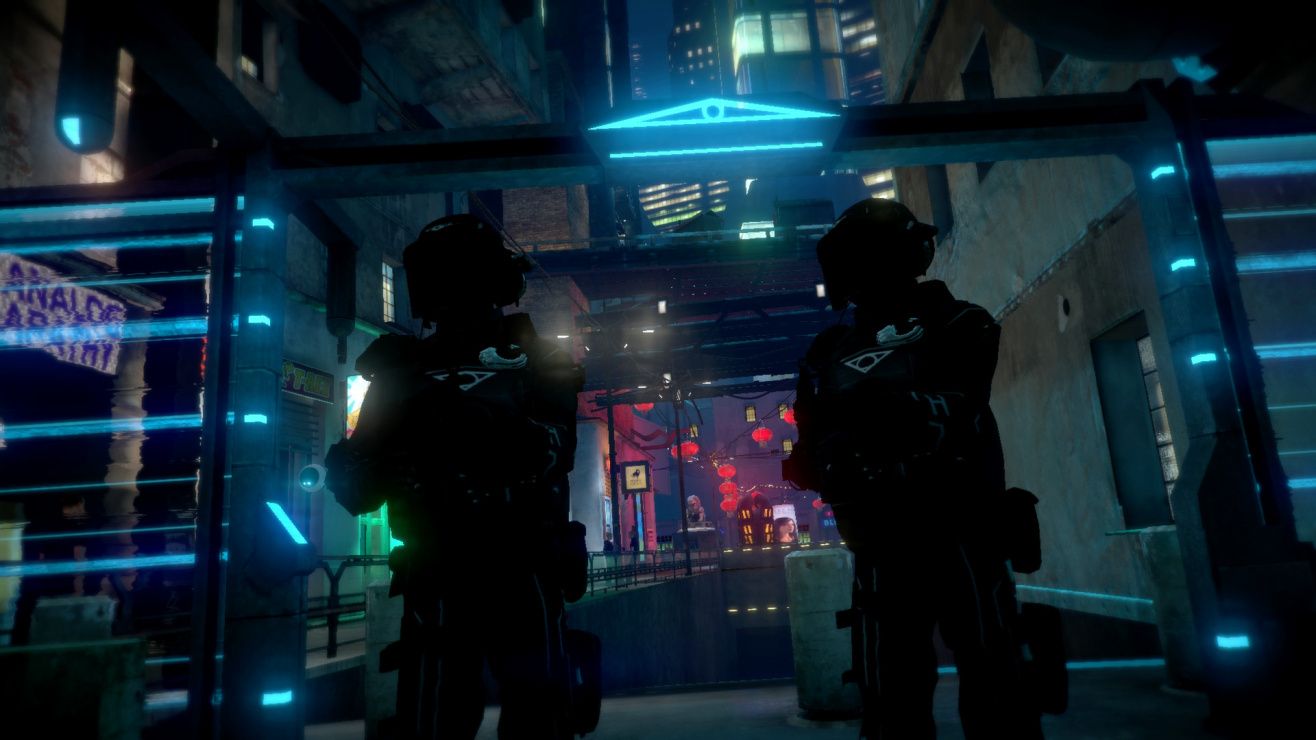 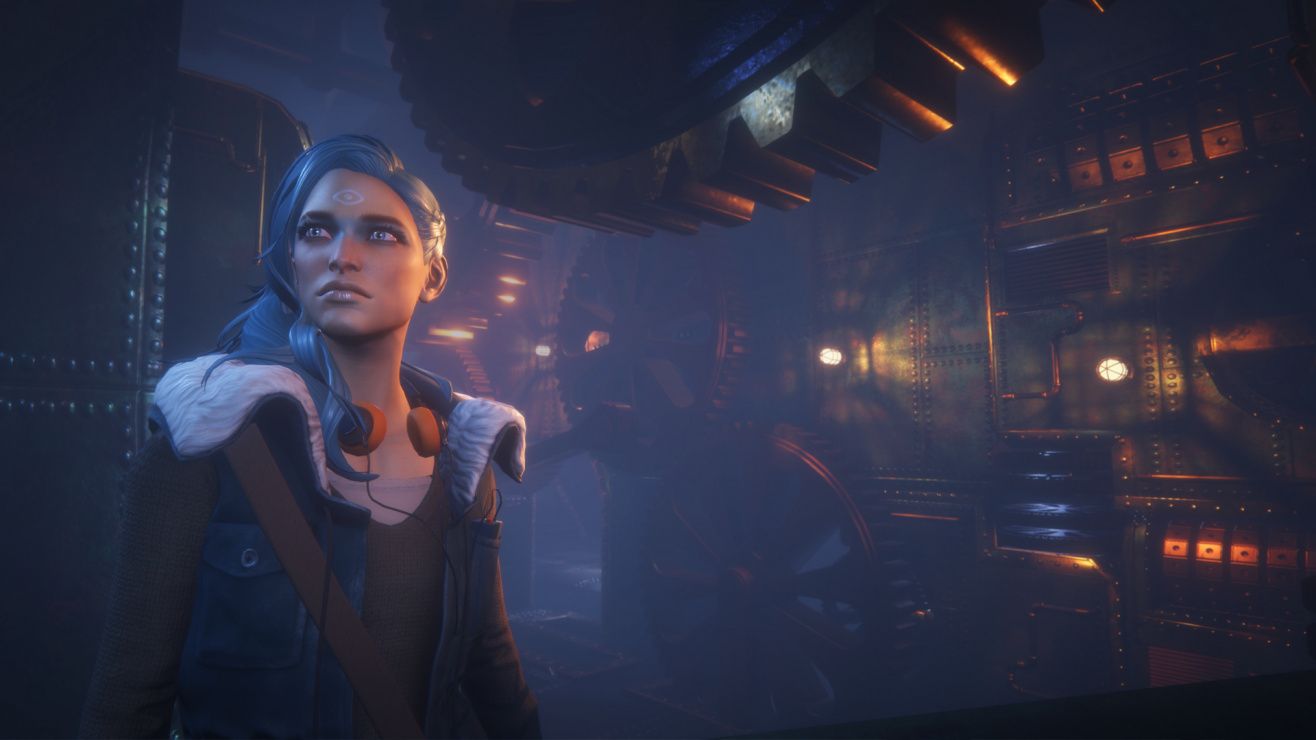 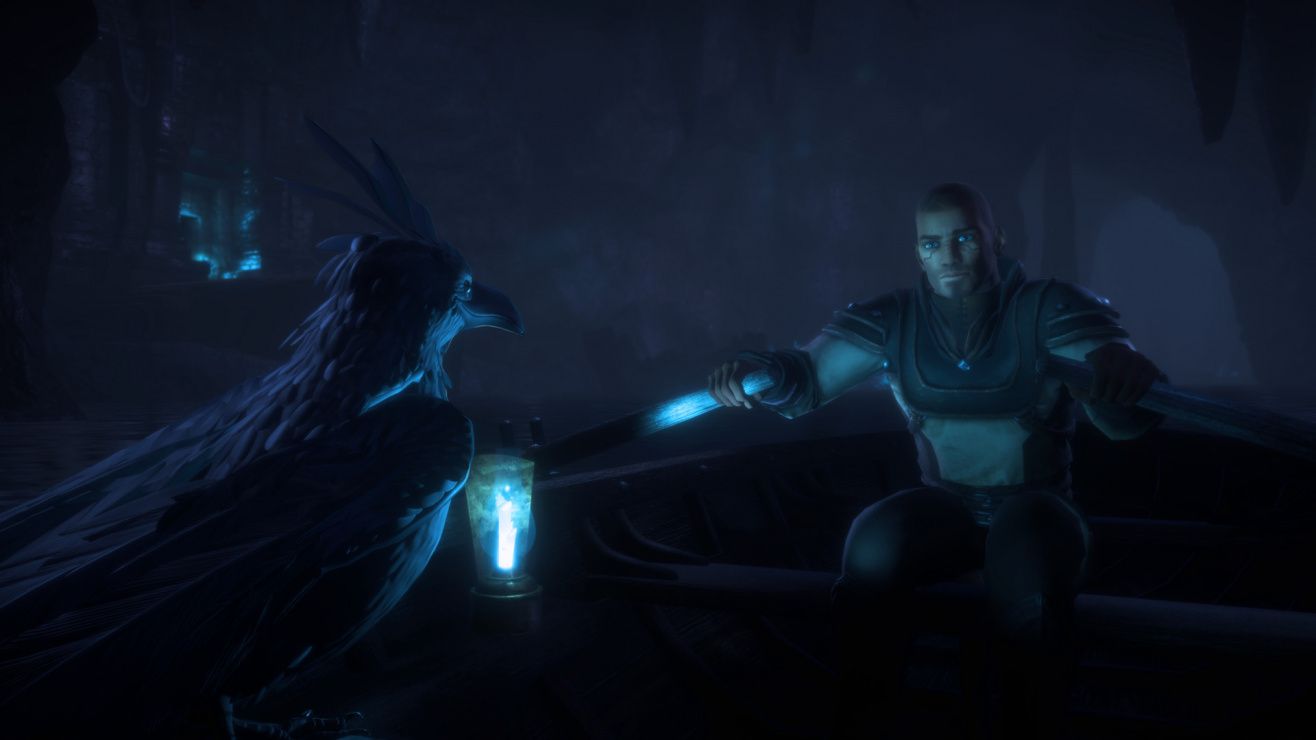 adventure atmospheric fantasy indie singleplayer story
The Final Cut is the remastered special edition of Dreamfall Chapters — an award-winning adventure spanning multiple worlds and playable characters. The Final Cut edition combines all five episodes into one complete story, with reworked character designs, an expanded soundtrack, remastered audio and new dialogue, improved art, lighting and animations, and new special features. Dreamfall Chapters is a stand-alone game in The Longest Journey saga; a narrative third-person 3D adventure set in the twin worlds of science and magic. Embark on a magical journey across Stark and Arcadia in a setting that mixes cyberpunk sci-fi with magical fantasy. Play as Zoë Castillo, a young woman seeking answers to her own identity; Kian Alvane, a disgraced Apostle and assassin seeking redemption; and Saga, a mysterious child trapped in a house between worlds.
Share Share Share
Promote for 50G

Hard not recommending this jaw-droppingly beautiful game, but be aware of the focus of story narrative. It was hard to keep my enthusiasm to keep playing. I often felt that I was moving from one conversation to the next, with long, uneventful walks trying to find the next NPC location, for another long cutscene. The story is solid, but I was not always interested in listening to the rather slow pace. In the late quarter part of the game, it is one long cutscene after another. It really felt like a visual novel, with the graphical trappings of an adventure game. Unlike an adventure game, there are very few items to collect, there is no equipment to upgrade, and no skill trees to advance. While it is "choices matter" type game, those dialogue options felt forced and without a feeling of the choices being connected to outcomes. Much later in the game, there would be a quick callback to the choice, like "remember when you chose that!?" Although the mechanism had one funny aspect... I did like being able to see what my steam-friends chose, especially when those choices were horribly sinister!
I played this game on an ubuntu linux desktop with radeon mesa graphic drivers. I noticed many graphical glitches, with textures flickering, such as a face mask disappearing momentarily. I played with an xbox-type gamepad controller. The game has lots of great graphical and audio assets, which take up 20,000 MBs of diskspace, and it uses the Unity game engine. I recommend this game for those looking for a relaxed, lengthy interactive story.

A fascinating game with interwoven tales, beautiful set pieces and believeable protagonists, Dreamfall is going strong and only getting started

The Longest Chapter of the Longest Journey
It's been a long time when i played the first few games of the series, a very long time. The only things I could remember was Zoe, Wonkers and a creepy ringu girl who walked between Tv's. I was very excited to play this new modern game of the series, it seemed really good and interesting. And at the end game: it really was.
Meet Zoe Castillo, a girl in a coma who are stuck in between worlds of dreams and reality. Her paths meet with Kian Alvane who is a character in the dreams, he is a traitor and betrayer and joins the resistance to battle the discrimination against the magical people. Among the reality and dreams you will find a strange girl who would probably bring this whole story to a conclusion. Play this piece to unravel the magical songlines of a story about reality and dreaming, about magic and non-magic.
Story
What can I say about the story. It's fantastic, well written, well executed. It did not fail to disappoint. In one game they had medieval sims and remember me stories infused together. I thought the dream machine idea for a story is very fantastic. The mixing of religious traditions, folklore and technology at the same time is a good chapter for the execution of this story. For some the story maybe very disoriented even if you do everything and play it twice. But that could be the beauty of the whole thing, letting the audience interpret things on their own. The story makes you sad, happy, angry and all the range of emotions. it is led by your choices, the choices are so powerful that it would either end everything or create something whole. I feel that there is only one main ending, no matter what you do. The choices you make saves certain characters or alter new paths but your outcome will be the same always. The story has a lot of powerful organizations being involved and restricting the rights of civilians in both worlds. So it kinda does feel like the dream machine is trying to enforce the brainwashing as a good thing. Philosophically speaking the story is all about how light and dark are both needed for balance. The developers have fashioned quite the universe with their own folklore, traditions and tech which is really interesting and sometimes tbh hard to grasp. But it was very well done.
Characters
I thought the characterization was pretty great. Zoe is such a kind hearted character, always trying to make friends, trying to lead a normal life. She is the main victim of powerful organizations coming together, trying to alter reality. Kian was a cold hearted character, brutal yet the story makes you realize why he has to be brutal. There are very interesting and cute furry characters: Enu (a very chatty one) and Likho (your enemy/brother) and shepherd (the leader). But my all time favorite would be crow. He is the most funniest little birdie ever. The story includes many characters and has good development of them (you basically direct the development) so yes. And yeah hats off to Mira, I couldn't stop laughing when she insults someone haha. It is also notable to say how much the developers respected many cultures through the characters and story. They made one of the main characters gay (in an enforced manner) but still, I thought it was sorta respectful.
Gameplay
The gameplay involves mostly walking around, doing puzzles, interacting and directing minor characters to do your bidding. You also make choices which is the main aspect of the game. You can collect, examine and combine various objects too. Gameplay is pretty linear and the puzzles were never close as hard to the ones in old games in the series.
Art and Music
The art is simply gorgeous and very well done. Futuristic art is something hard to pull off imo but doing both medieval and future settings together, the artists really went their way off for this game. The music was pretty good too, not mind blowing but good enough to bring out the necessary emotions out.
Achievements
It took a while to get all the achievements since the game is a bit long. You will have to play the game patiently twice to get all achievements, most are tricky but not super difficult. One con I saw in a review was that the cut scenes were unskippable, they are actually but sometimes you can skip them and other times you can press space and quickly skip dialogues line by line. Since such features were there, it was not completely bad. But yes, it was time consuming. Nevertheless, it was still pretty interesting to play it twice and see how the new choices develop the story.
Recommendations
I mean this is a well developed story, the only flaw I could sense was at the end where when Kian went to Azadir, the story kinda is not manipulated by the player. It was the last game and the last fight with the resistance and I so wish that I could have played those parts as well.
Overall
The game is almost like a visual novel, relaxing and non-pressuring. It has elements of both techno cyber punk infused with medieval 16th century settings oh and with a healthy mixture of furry characters. So if you like those things, give this game a go. You will not be disappointed.

When I completed this game I felt so, so sad... not because of anything to do with the game or gameplay, but because I could never experience this game for the first time ever again; I did not want it to be over.
This series has one of the most captivating and wonderful stories in any game I've ever played ever. It's incredibly well though out, and has the perfect mix of fantasy and reality. Yes, the first game has aged and you need a VM to even play it now, but playing the first two games and concluding with this one has been one of the best game experiences I've ever experienced.
I cannot recommend this game series highly enough.

For fans of Dreamfall & The Longest Journey, it's definitely worth a play. However, you'll definitely need to have played both prior games in order to understand the plot, so if you haven't played those, I highly recommend playing them in order and then playing this. If you are a fan of story-based adventure games, definitely pick those up first, and then pick up this to finish the saga.
However, it is important to keep ones expectations where they should be. This trilogy finale is unfortunately overshadowed by its predecessors in terms of story depth, visuals/artistic direction, soundtrack, and the worlds presented. That's not to say it's not a satisfying conclusion; it definitely is a satisfying conclusion to the series. It's just that it could have been much more, but it definitely did have a much more difficult time getting made to begin with in an era that has much less respect and focus on simple immersive single-player linear experiences. The difficulty encountered in making it definitely shows.
That said, if you do enjoy single-player story-based linear adventure experiences, definitely pick it up regardless of its issues (if you have played and enjoyed its two predecessors). If you are not a fan of this genre, then this game will likely not appeal to you.

One Sentence Reviewer
Complex story where each episode makes you more excited about the journey, recommend watching recaps of the previous games.