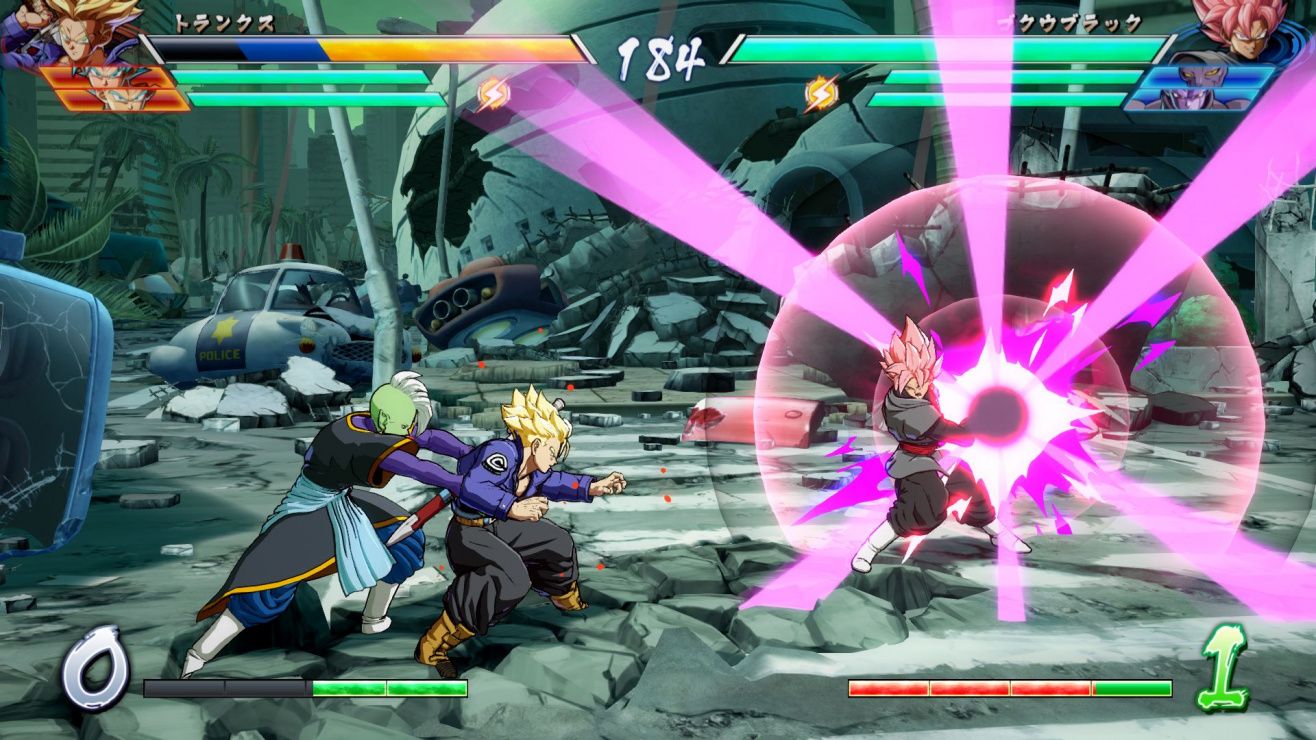 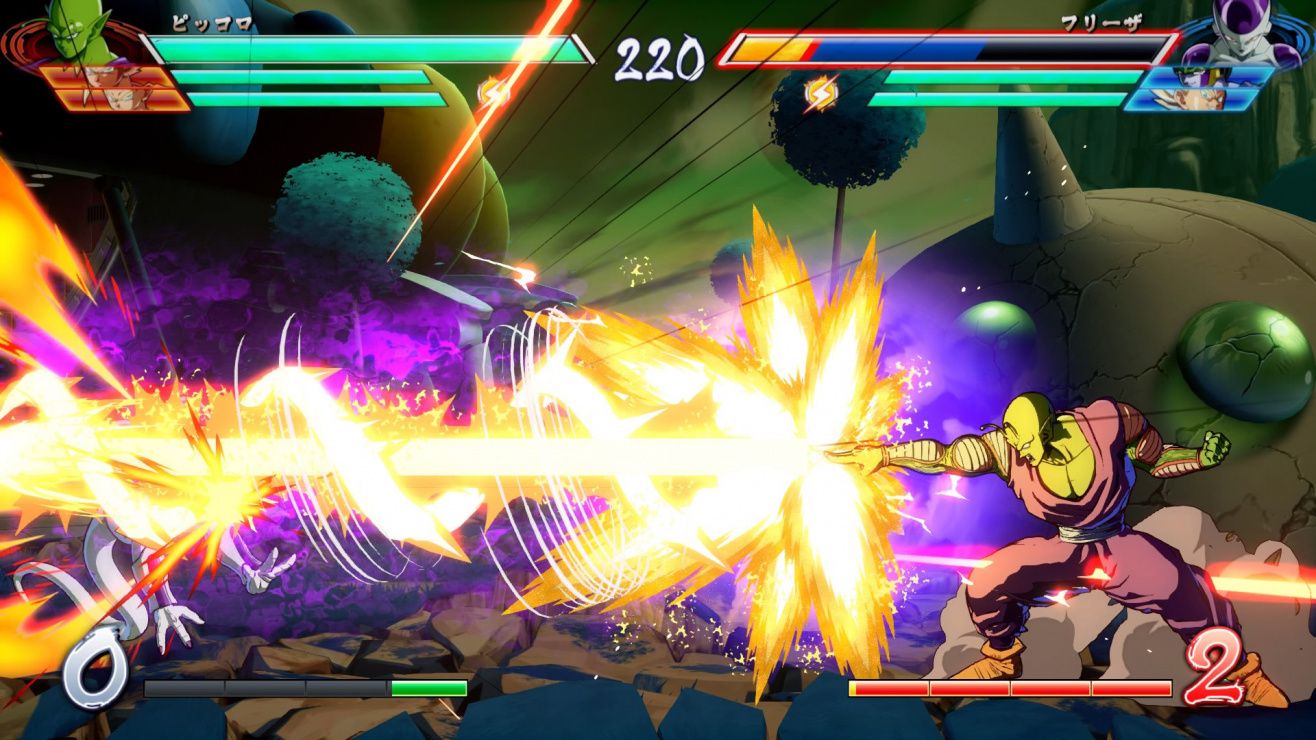 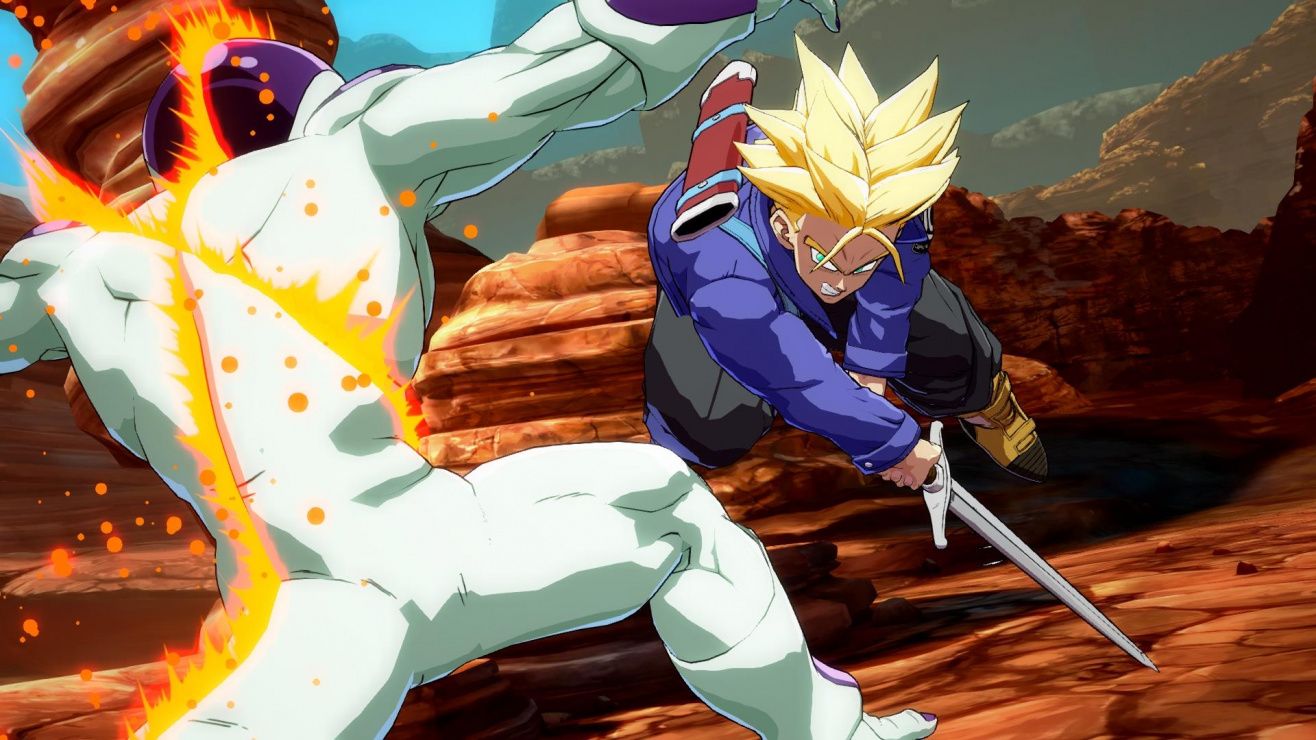 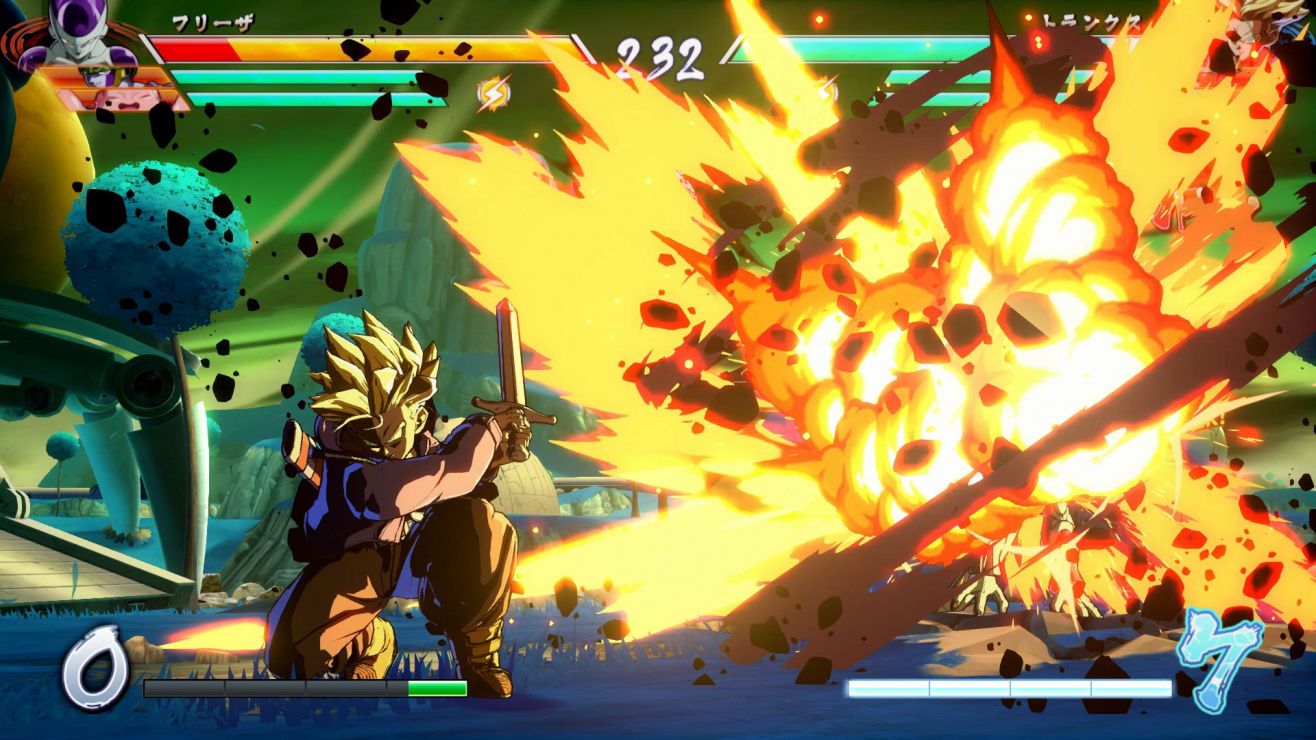 Only flaw is that NAMCO thinks the base game is worth $60.
"Ultimate Edition" goes on sale for $30 some times, only acceptable amount to pay.

The game is good. I like Andoid 21. Her boobs are large.

The game is pretty good, although there's one problem.
GIVE US CROSS-PLATFORM, YOU COWARDS!!!
PLEASE, I'M BEGGING YOU!!


📓 Story
The game takes place sometime between "Universe 6" and "Future Trunks" arcs of Dragon Ball Super. The game's main antagonist, Android 21 (or later, her evil-half), was a normal human who eventually became an Android created by the Red Ribbon Army after her son became the model for Android 16. Once she awakens, she repairs 16 and uses the Dragon Balls to resurrect Frieza, Cell, Nappa, and the Ginyu Force, and seals away the powers and souls of all of Earth's strongest warriors. Wanting to control the hungry monster within her, she and 16 develop a linking system originally created by Dr. Gero in which a human soul (the player) can possess the warriors and provide them strength.
●There are 3 Arc's in Dragon Ball FighterZ

● Super Warrior Arc
This is the first Arc of the game, and in it we play the role of the “player's soul.” After “possessing” Goku, we wake up to Bulma, according to whom Goku has amnesia. After a short further explanation of what is happening, you go in search of your comrades to create a strong team with which to defeat the main villain in this Arc - Android 21.
● Enemy Warrior Arc
In the second Arc you are given the opportunity to "possess" the body of an main villain from the anime. You play with it, form a team of villains, and then even make a joint team between villains and heroes to beat Android 21.
● Android 21 Arc
This is the last arc, where everything will end once and for all. In it you have the opportunity to play on behalf of Android 18 and also on behalf of the main villain of the previous 2 arc's - Android 21. In it you finally understand many important things about the story and you are given the chance to see her good side. For me personally, she became one of my favorite characters in the game.

🕹️ Gameplay
● Mechanics
You choose 3 characters to fight with. An interesting mechanic in the game is that you can change the other 2 characters at any time, which opens up great opportunities for different combos. You can also call them for "assist" while fighting, and this also opens up other possibilities for combos. With all these combo capabilities, the opportunity for world stages and many competitions is actually alive. There is another special mechanic. It's called "Come on, Shenron!". To use it, you need to collect the 7 dragon balls, which you can collect through different combinations of strikes. Once activated, this option allows you to choose between several of your "wishes": increasing your fighter's strength, reviving a fallen ally, recovering a fighter's health or regenerating health for the rest of the match. Something i don't like is the mechanic for blocking. You can move backwards to block a punch and you have having 3 different types of blocking. The first is to block frontal attacks, the second is to block attacks focused on the bottom of your character, and the third type of blockade is for top attacks. They all come with key combinations involving backwards moving.
● Ai's

Let me explain to you how things are with AIs. When you launch the game and activate the story mode, you can start only with "normal" difficulty, which I find a bit boring. In the first arc, the AIs rarely make any punches, in the second they hit from time to time and in the third you can now feel the real feeling of the battle in the game, but not to the point where you need to execute flawless combos in order to defeat them.
● Esport and ranked scene
Above in pros and cons I noted that the game has a developed Esport scene, but there is also a lack of players. Let me explain these words of mine. The game already has a world championship, which is being held for 3 years in a row. There are other tournaments that I am not familiar with. You are probably wondering how there are world championships, but there are no players? I was also wondering that. From my personal observations I noticed that there are 20 people in the servers and they are all already developed players in this game. When you let matchmaking look for people of your caliber, you upload for an indescribably long time, and if you accidentally find someone for one game, then it happens that you play against both the next and the next round against him because are no other newbies. From these personal observations, I came to the conclusion that there is simply a lack of players and all that is left in the game are people who have already developed some higher skill level.
📊 Difficulty
The game can be as difficult as you want. The game has many difficulty settings for the story and arcade modes, on top of fighting ranked online if you're looking for a bigger challenge.
🎼 Soundtrack

The music in Dragon Ball FighterZ was composed by:
● Toshiyuki Kishi
● Hiromi Mizutani
● Kenji Katoh Reno
The music is themed for fighting games. It fits well into the atmosphere and definitely moves the game. Each character in the game has a themed song and each arena has its own song. Separately, we have intro, main, lobby and loading songs, and to top it all off, Bandai offers you 2 anime song DLC's that you can buy, but not at the small price of $ 14.99 USD. (Note, gameplay recording will be blocked when these songs are playing due to copyright issues.)
👨‍👩‍👧‍👦 Target audience
The game focuses on people who like anime and mainly on Dragon Ball fans. It is also focused on people who love 2D fighting games with Esport scene.
💯 Performance
The game is not very strenuous and can easily be played on machines that are not as strong. I think you can easily play it on maximum graphics with GEFORCE GTX 1060, not to mention weaker than that. I have not encountered any problems with FPS and I have not had any drops. I dare to say that the game is well optimized.
Tested with the following setup:


💻 Graphics / Art-style
Well, the game's graphics don't need RTX 2080 to see their full potential. As an anime-based game that has to stick to a certain visual, this game makes it great. The visuals definitely gives you that fighting game vibe and is aesthetically pleasing. There are great effects as well, which I was able to fully enjoy.

I will definitely recommend you this game because it is actually worth it but since it's a game from 2018, just wait for a sale. She is getting a lot of big sales.
📹 YouTube
I've personaly played all these Arc's and i made them in a YouTube series, so you can check them on this link:

You can be Goku

I bought this game when it first came out, I will be reviewing its game in its current state (Currently we are on Season 3)
I may update this review in the future if there are more user-friendly features or a removal of user-friendlyness in this game.
This game is a fighting game, as such it will have game mechanics that don't inherently make sense and will cause you frustration.
With that out of the way, I can wholeheartedly recommend this game in its current state to anyone who either A) loves Dragon Ball or B) loves fighting games. This game's presentation is absolutely bonkers and does an excellent job recreating Dragon Ball in the Arc-Sys art style, while still retaining the look of Dragon Ball.
The mechanics that this game presents are complex, but the game has a specific mode called "FighterZ Dojo" which helps explain all of these mechanics, which makes it very easy for newcomers to learn the game by just playing it instead of watching Youtube videos.
The game also supports various types of playstyle, by allowing the player to pick from 3 assists per character on their team of three. If you want to pressure your opponent? you've got assists for that. Do you want to combo your opponent and deal a lot of damage? You've got assists for that. Do you want to hang back and try to react? We've got assists for that too. The many different types of assists and characters allow for any player to pick up this game and create a team that suits their playstyle.
Yes i understand there is a painful amount of Goku in this game but they all play different, also Dragon Ball's main protagonist is Goku so it makes sense that he is represented the most
The game's storymode is mediocre, but the team interactions before a match starts are a great way to have genuine fanservice in the game by developing what-if dialogue to be played before a match in story mode starts.
Training mode in this game is very effective, it allows you to not only practice combos, but also practice reactions to the opponents actions by allowing you to record actions. Recording actions is very powerful and key if you want to develop strategies to either protecting yourself or to stay on offense.
Arcade mode is a mode, very simple. You fight enemy AI teams in rapid succession. i do not like the artificial damage increases that you experience when you progress in arcade mode
Tournament of Power mode in the FighterZ Dojo is a fantastic mode that doesn't feature artificial damage scaling, and you get rewarded for playing a variety of characters in that mode with "Titles" that are specific to that character. Titles appear on your player card before a match begins, they can say things like "First to Fighting" or "Nervous Around Girls". Some reference characters directly, like when Vegeta says "Heh! What Dirty Fireworks!".
Online is a bit iffy, but if you have a wired connection and filter what connections you want to see when engaging in matchmaking, you should do well. The reported connection is not your opponent's quality of internet, but instead its the relationship between you and your opponents connection.
Overall, I rate this game a 8/10, it has its flaws and some of the game mechanics do not make sense (super dash is a good example), but if you can get over that, the game provides all the tools you need to have a great time. Online has some quirks too but they can be circumvented
Please be wary of the extensive DLC, there is a lot, and if you want to buy them, please check youtube videos featuring those characters to see if they are worth your dollar. I have bought all the DLC because i just would like as many possibilities as possible when playing, but you may not feel the same.