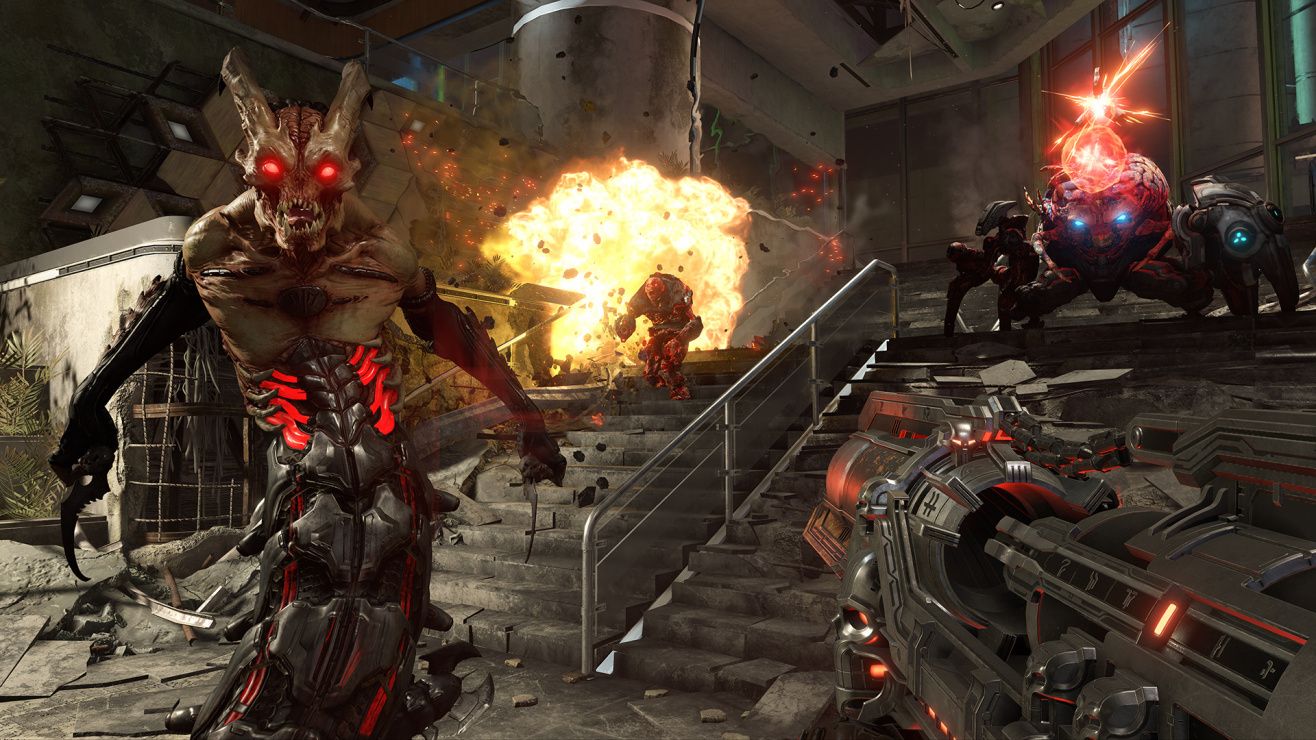 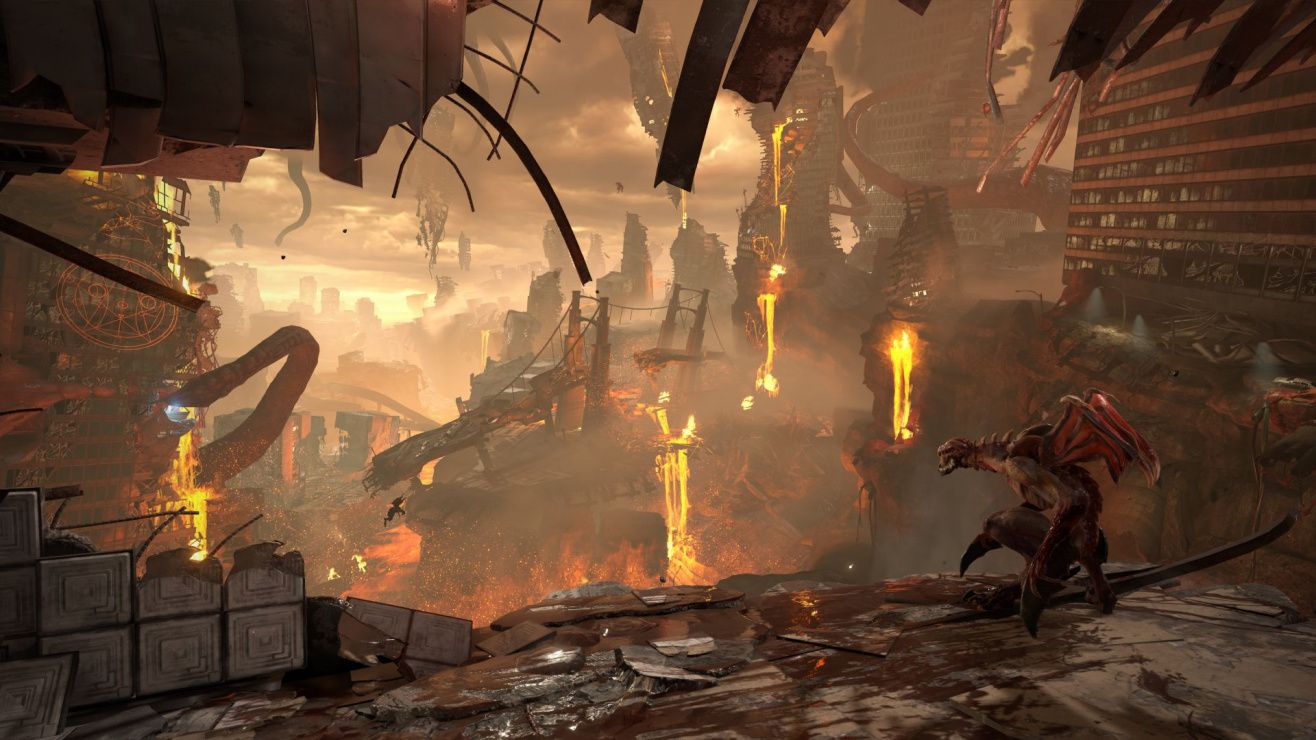 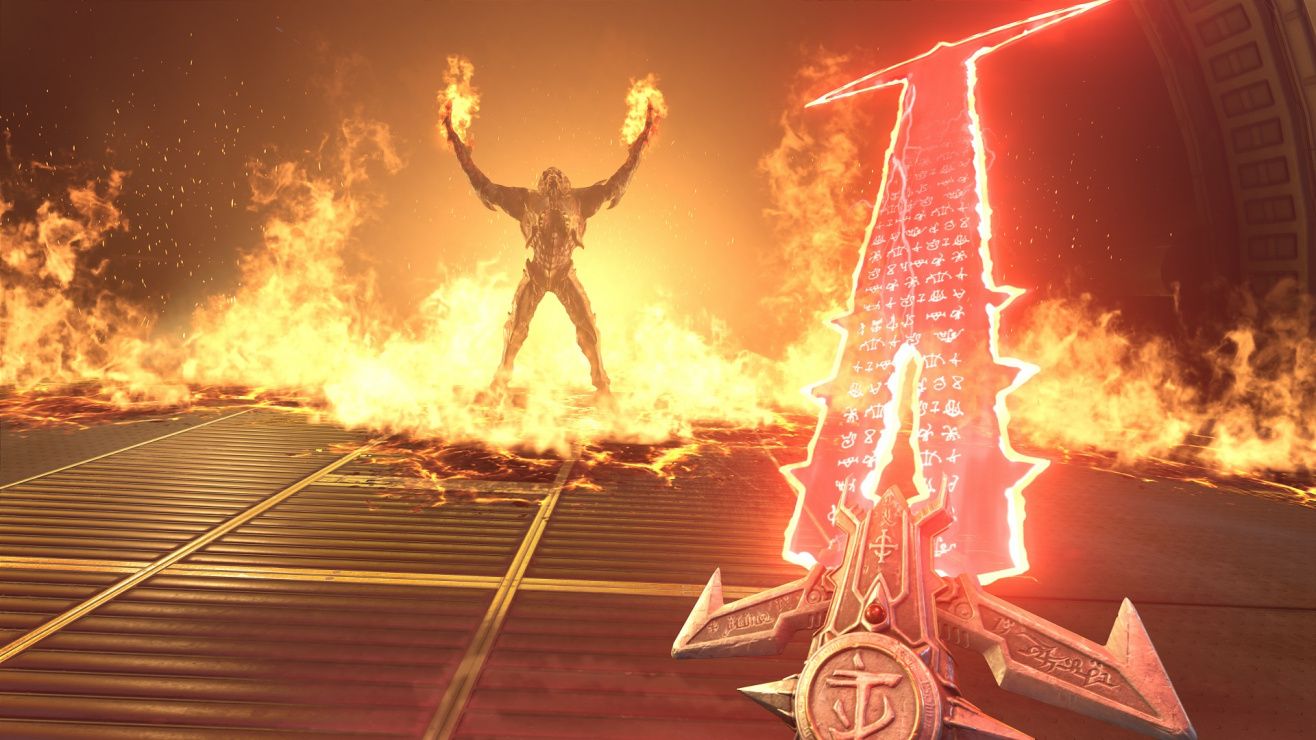 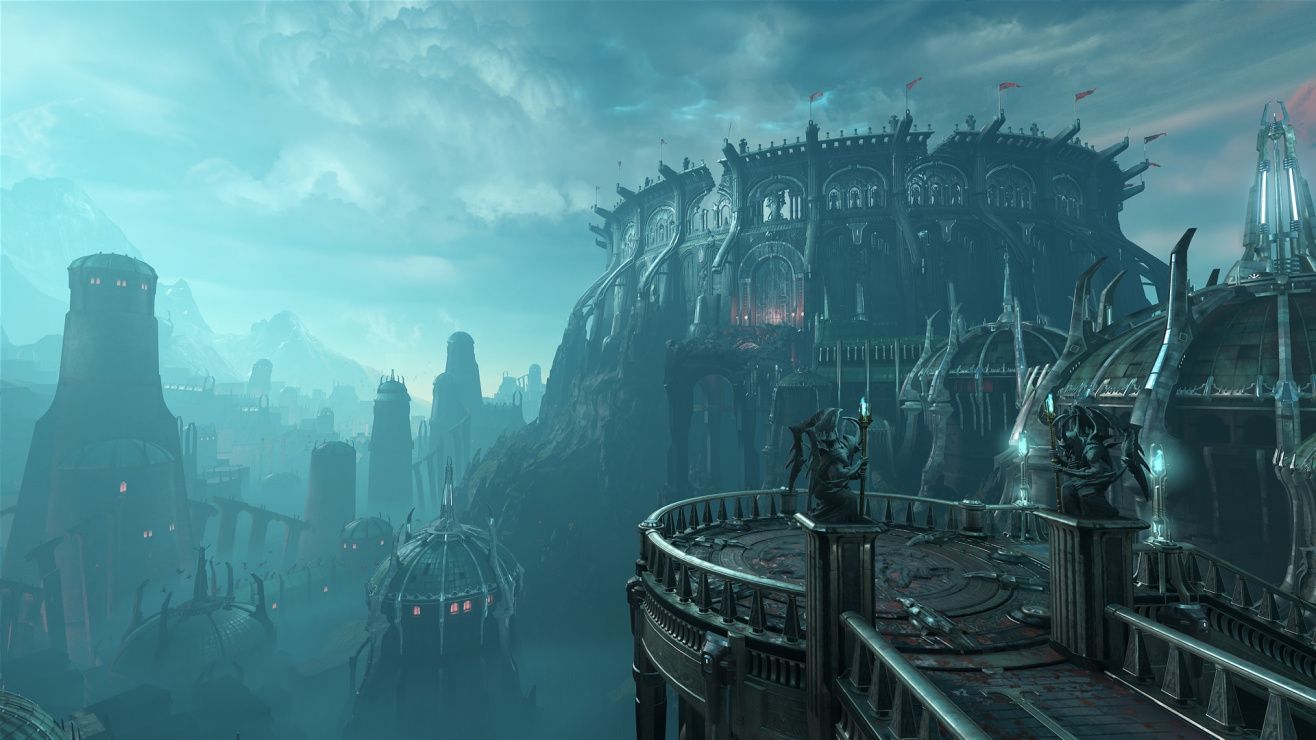 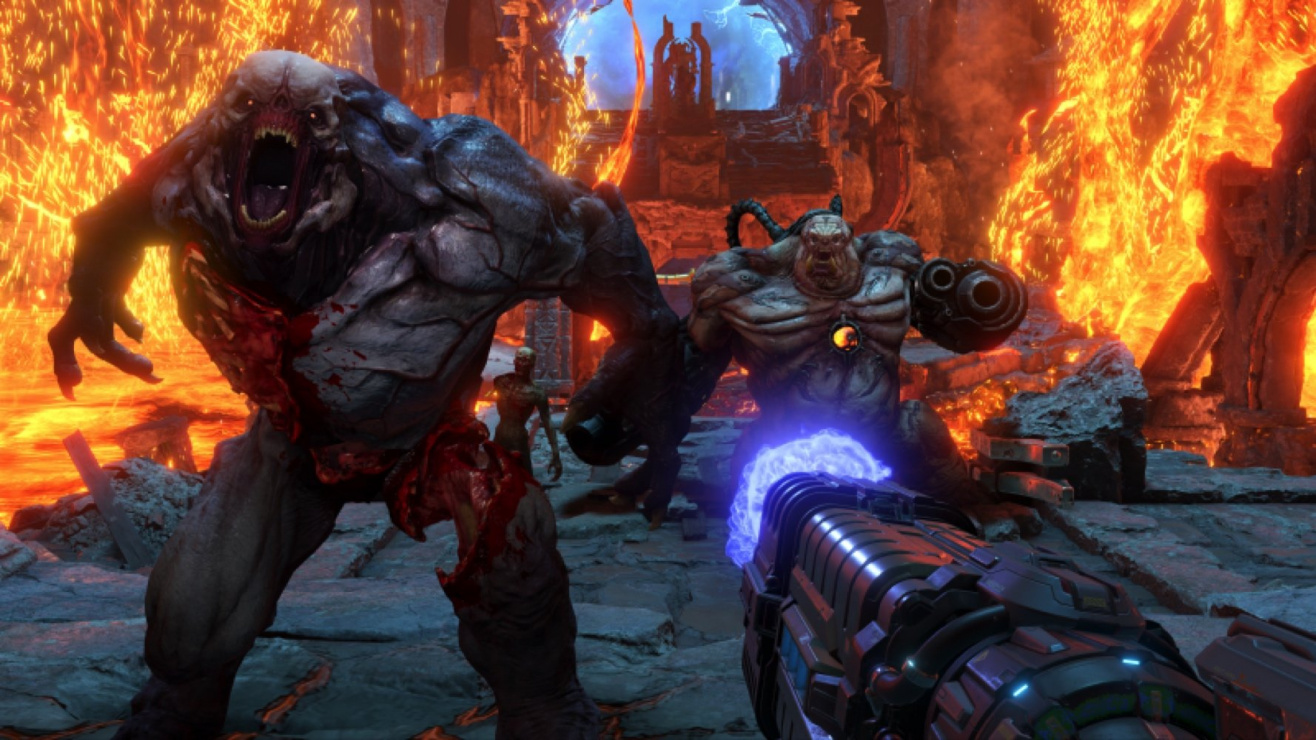 action dark demons fps gore hell mars multiplayer sci-fi shooter violent
As the DOOM Slayer, you return to find Earth has suffered a demonic invasion. Raze Hell and discover the Slayer’s origins and his enduring mission to rip and tear…until it is done. Experience the ultimate combination of speed and power as you battle your way across dimensions with the next leap in push-forward, first-person combat.
Share Share Share
Promote for 50G

Everybody gansta until you met Marauder.
Pd: Turn off Steam Overlay, you can get more FPS.

EDIT:
Doom Eternal initially was a turn off for me, after beating Doom 2016 over and over. Everything is so different... ammo pickups are neon pink and green, guns are floating neon items that you pick up just by running over with no cool animation, ammo is as scarce as in a horror game, and you're thrown in this mess of not knowing what's happening except "I must kill".
However after playing a few hours and getting the hang of the combat loop, as well as getting much needed upgrades and some verrrrryyyy interesting codex entries, everything started to click. The story felt more cohesive and while there is a bit missing in the gap between 2016 and Eternal, much of it is filled in and then some. You get used to the recharging chainsaw, so ammo is never an issue, and while I still miss the realistic weapon pickups from 2016, I understand why they changed it.
Yes, there are some definite differences between Eternal and 2016, but nearly all of them are for the better. Combat is even more visceral, and while it may at first feel the game is forcing you into a certain play style, it's ACTUALLY giving you more control on how to manage resources. You have to play smarter, but you can also remedy any situation far easier than in 2016. Need armor? Cook em. Health? Stab em. Ammo? Saw em. It's so straight forward but very satisfying at the same time. And after experimenting a bit with weapon loadouts, you DO NOT have to use sticky bombs or zoomed rifle shots to disable demon weak points. It is preferable because it's much faster, but I was able to disable their points with different weapons or completely ignore them entirely, by overwhelming them with firepower.
I will say (no spoilers) they really fleshed out the lore of Doom, and made it far more interesting IMHO. Much of it is implied and hidden in the codex entries, but it actually makes the occurrences of Doom 2016 much bigger and interesting. I thought they did an amazing job with the story/lore.
Of course, this wouldn't be a Doom review without also mentioning Mick Gordon's stunning soundtrack once again, that makes you miss shots due to headbanging. It is a simply ear-gasmic experience that perfectly complements the ripping and tearing you do in Doom Eternal. The joke about Mick Gordon's soundtrack coming with a game is fitting, as I see both the soundtrack and the game as some of the best media to come out in recent months (at least for me).
I haven't even tried Battlemode but I can say as a RAVING fan of 2016, that this game is 100% worth it even at full price just for the campaign. It took me 20 hours to beat, without even hunting for every single collectible. The whole thing was a roller coaster ride of flying gore, pounding metal and chunky guns, but with a surprising amount of twists, environments, and experiences. They knocked it out of the park with this game, with the sheer amount of places you get to visit (the sentinel cities are soooo cool, with a weird nostalgic atmosphere to them). Also from a technical standpoint it runs very smoothly, and I've had very few problems with it on PC. It's an extremely well polished game!
Overall Doom Eternal is simply everything I dreamed it would be, which is really saying something these days. ID Software should be PROUD of this masterpiece and I can't thank them enough for continuing on this series.

My girlfriend left me because I spent 90 bucks for this game instead of taking her to a fine dining at McDonalds.
But it doesn't matter.
Women are temporary,
But Doom is Eternal.

//Before we begin,I would like to adress an issue and how to fix it. If you are having low frames despite having a good PC,it is because of the steam overlay. I too had this problem at the start,but thanks to disabling it,I was able to play the game on Ultra Nightmare settings on 1440p with a gtx 1080 and an i7 8700,which are quite a bit under the reccomended specs. for UN settings on 1440p.//
Alright,where to start:
!!!First of all,let's adress the problems that all the negative reviews say:!!!
1) The platforming
This is my biggest complaint, I have to agree its a little tedious and annoying,but its the fact that it feels a little too forced and its not really good platforming either that makes it a turn off.
2) The cutscenes:
There are cutscenes obviously,however I dont understand the backlash,you can simply skip them,theres a button that you must press and hold down for 1 second and a half. D16 had unskippable parts that were waay more annoying than these scenes.
EDIT: I understand the hate behind it,some people wanted it to be more like the ones that D16 had and while I agree with them to a certain point, the ones that are in DE are pretty well made and personally had no problem seeing the doomslayer giving every single demon a death-stare
3) The ammo problem:
I admit ,in the first two levels,it felt really annoying to not have ammo,however as you got more guns,it didnt feel like that anymore,because I had more guns to shoot and after depleting all of the ammo THEN I would have to use the chainsaw.
Most of the reviews that talk about this have less than 2 hours played and thus cannot experience what its like to have more options to shoot shit down,because you obviously dont get all the weapons from the start.
On a side note,I cannot figure out how these people run out of ammunition,it doesnt add up. The highest probability is they skipped the tutorials and didnt understand that the chainsaw is pretty much a game mechanic and not an optional weapon anymore.
EDIT: Again,more people have understood that I ran out of ammo when I said in my last paragraph that I "Cannot figure out how these people run out of ammo"
4)The HUD:
Literally everything about it can be changed, you can switch up the colors and turn off most of the elements if not all, if playing doom without a hud is your thing,than worry not,you can do that.
5)Too many colors:
I have seen a few reviews that say that when you chainsaw an enemy,the colors of the ammo are too much,this I can agree with a little,I dont think they needed to be super brightly colored, an option to toggle this off would indeed help.However I think this is more of a personal preference than an actual problem
EDIT: I had no Idea there does indeed exist an option to lower the brightness, this is no longer a problem.
6)Linear levels:
D16 also had linear levels,its nothing new.
8)The Bethesda Account:
This indeed sucks,I wouldnt trust bethesda with my account information,but im not gonna let that stop me from playing the game,especially when they dont force the launcher in your pc,like ubisoft and rockstar do.
SO,honestly this game feels pretty darn refreshing to play,its a lotta fun and pretty fast paced. If you wanna buy the game,then buy it,dont let others influence you with " tOo MaNy CutScEnEs" or " tOo LitTle AmMo!''
The game is fun,it truly is, the only real problem it has is the platforming,it does feel a little tedious at times.
It is something new,if ID would have given us a carbon copy of D16, people would have said that it took em 4 years and a delay to shit out this garbage?
I think people need to actually play the game for more than two hours before giving it a bad review and refunding( I think valve needs to make the limit up to 4 or 5 hours,to really get a feel of the game,especially on big games like DE or The witcher 3)
This game deserves a 9/10,it is really good and I really recommend it.